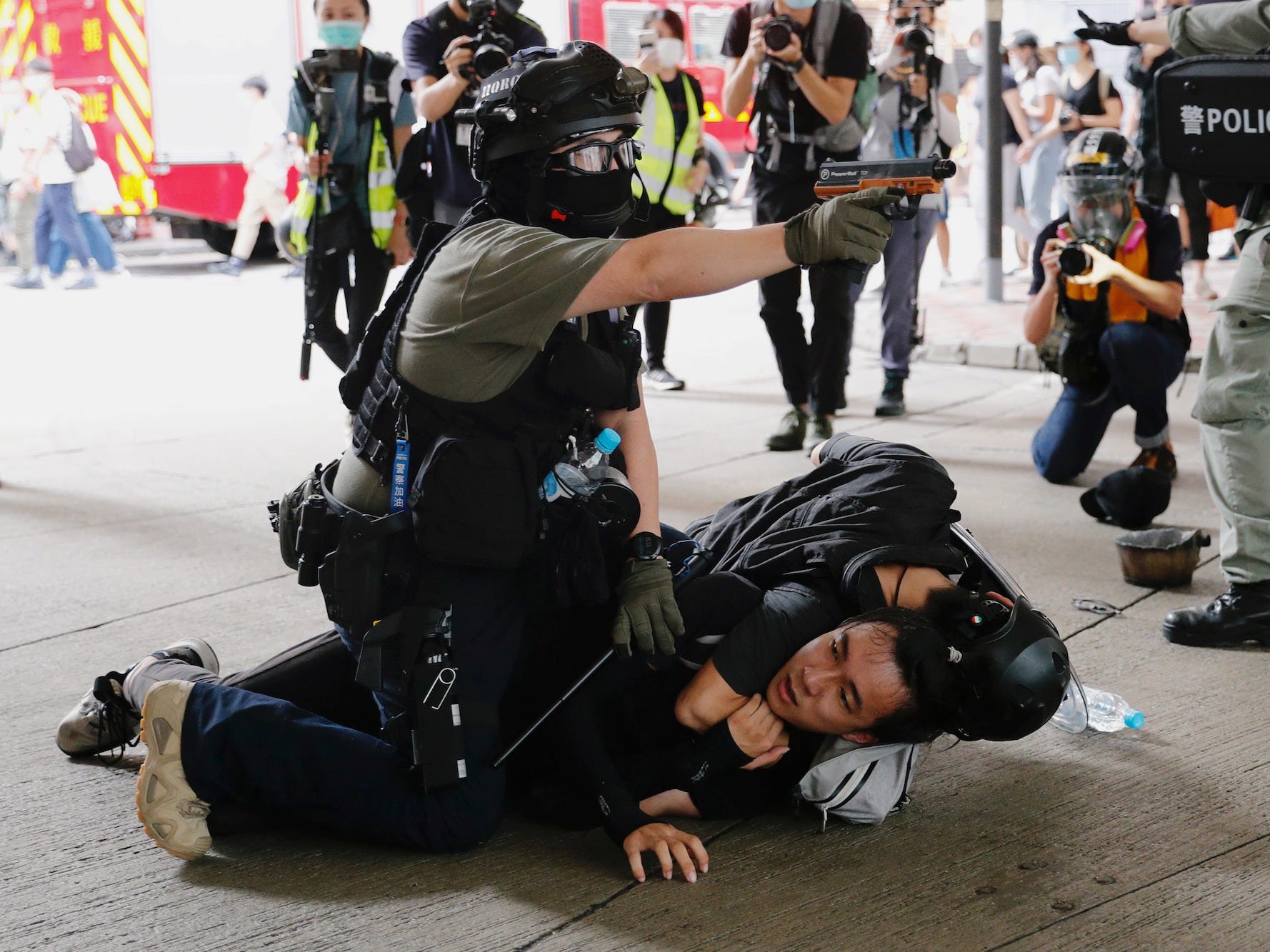 Tyrone Siu/ReutersA police officer raises his pepper spray handgun as he detains a man during a march against the national security law in Hong Kong on July 1, 2020.

July 1 – the day the UK handed Hong Kong back to China in 1997 – is traditionally a day of protests, protected under the city’s mini-constitution, named the Basic Law.

But on Wednesday, when hundreds turned out in Causeway Bay, a busy shopping district, they were were faced by riot police.

Police kettled protesters, and used pepper spray and water cannon to disperse them.

Police used pepperballs against the crowd. During the chaos, reporters were pushed and pepper sprayed. pic.twitter.com/PeR51RNByL

Riot police arrive on the scene and clear the debris. Full story: https://t.co/5JZKqP5Jsq

According to the Hong Kong Police Force’s official Twitter account, nine of the arrests were on suspicion of violating the new law, which forbids secession – any attempt at separating Hong Kong from mainland China.

One of these was a man with an independence flag, and another a woman holding a pro-independence sign, CNN reported.

Earlier on Wednesday, Hong Kong police also tweeted that “three females” were arrested for showing materials with pro-independence slogans. It is unclear if these are included in the nine national-security arrests.

The number of arrests – under the national-security law and in total – are as of about 8 p.m. local time.

The penalty for secession can be between three and ten years and life imprisonment, according to the law. Details of the text were released earlier on Wednesday.

The other arrests were on suspicion of “offences like unlawful assemblies, disorderly conduct in public places [and] furious driving,” according to Hong Kong police. An earlier tweet had also named “possession of offensive weapon” as one of the reasons for arrest.

#BREAKING More than 300 people have been arrested in #HongKong so far for offences like unlawful assemblies, disorderly conduct in public places, furious driving, and breach of the #NationalSecurityLaw, which accounted for 9 arrests (5 males & 4 females).

The new law, which came into force late Tuesday night, is ostensibly intended to restore stability to Hong Kong, which has seen waves of protests since 2014.

However, it has been fiercely criticised for eroding the city’s freedoms under the “one country, two systems” principle secured under the terms of its handover from the UK.

The text of the new security law was not made public until it was passed. It was drafted behind closed doors even without the input of Carrie Lam, Hong Kong’s chief executive, CNN reported.Lam refused to offer comment on the law on Tuesday.

Details of the legislation have since been released. According to the document, the law imposes penalties on secession; subversion of the Chinese mainland’s one-party rule; terrorism; and collusion with foreign forces.

However, the wording is vague, and experts have raised concerns about how broadly the law could be imposed.

Its chilling effect was felt ahead of its passing as activist groups disbanded and hurried to erase social media posts.