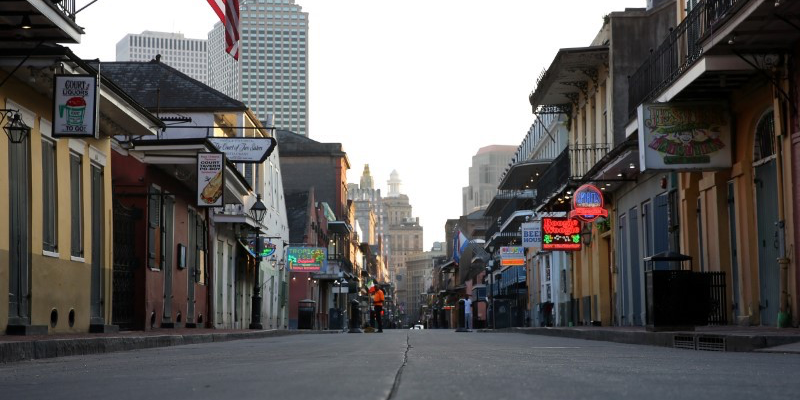 In March, as the coronavirus pandemic hit and led to sweeping shelter-in-place orders across the US, Homebase made a discovery.

The San Francisco-based software company – which helps small businesses with scheduling, hiring, and more – saw in its internal data that the lockdowns to contain COVID-19 were having a huge impact on its clients, leading to mass closures and slashing employee hours worked.

“Very quickly we realised that we needed to drop everything we were doing, throw out our roadmap and focus on helping Main Street survive,” Homebase founder and CEO John Waldmann told Business Insider. “The goal from the beginning was to shine a spotlight on the issues and hope that it works to help them in the form of government response.”

The data team spent two days straight making the internal information publicly available, Waldmann said. Then, the company started sharing the data with academics, government officials, and the media to bring attention to what it was seeing.

Just a few months later, Homebase data has become one of the top high frequency indicators tracking the economic recovery from the pandemic recession, and has been cited in academic papers and media reports, and even presented to the Federal Reserve.


:
RBC says buy these 48 stocks spanning every industry that are poised to crush the market if President Trump wins reelection.

The proof is in the predictions

The coronavirus pandemic early on presented a unique issue for economists hoping to forecast the trajectory of the impact and ensuing recession. The speed of the virus spread and sweeping shelter-in-place orders that greatly slowed activity made many of the indicators that economists usually rely on quickly out of date.

In the wake of the pandemic shock, economists and industry watchers started looking at a slew of high-frequency indicators from alternative sources to gauge the economic crisis, including TSA checkpoint traffic, hotel occupancy rates, Google and Apple mobility data, and even OpenTable reservations.

“On the one hand, it was being a kid in a candy store. On the other hand, it was candy we’d never tried before and we didn’t know how accurate it would be over time,” Ernie Tedeschi, an economist at Evercore ISI, told Business Insider.

Economists turned to Homebase data – which shows employees working, locations open, and hours worked -in the early stages because it’s updated frequently, on a daily basis. But its popularity as an indicator grew when it proved to be a solid way to forecast the monthly nonfarm payrolls report.

A majority of economists expected the May jobs report would show another month of devastation after record job losses and a spike in the unemployment rate in April.

Maximiliano Dvorkin, a senior economist at the Federal Reserve Bank of St. Louis, had a forecast that differed from the majority’s. Using Homebase data, he estimated that the monthly nonfarm payroll report would show jobs were gained – a prediction he presented internally to the St. Louis Fed.

When the report came out, it shocked economists by showing the economy added 2.5 million jobs and the unemployment rate declined.

It also showed that Dvorkin’s forecast was on the money. “I was simply glad,” he told Business Insider, adding that he got a lot of congratulatory emails including one from St. Louis Fed President James Bullard himself, who also shared the data with the rest of the Federal Reserve.

So far, the data has proven to be an incredibly useful tool. In June and July, the Homebase data again accurately forecast the nonfarm payrolls print, even when other economists were unsure about the direction and size of jobs gained or lost during each month.


Read more:
Stocks are making their most extreme moves in 20 years – and one quant expert says the COVID-19 crash was a preview of more ‘wild swings’ to come

The link between small businesses and the entire economy

The accuracy of Homebase data hinges on its user base of more than 100,000 small businesses, an important part of the economy especially amid the coronavirus pandemic recession and subsequent recovery. Homebase’s user base “is really very much the small hospitality, retail business, which remain at the forefront of this particular economic crisis,” Marianne Bertrand, a professor of economics at the University of Chicago Booth School of Business, told Business Insider.

The data, even with this bias, was a good snapshot of the labour market, she added. “Whatever we have observed in the Homebase data, we see similar patterns in the rest of the economy,” said Bertrand.

Small businesses employ nearly half of the US workforce and account for 44% of the economy, according to data from the Small Business Administration. They’re also crucial to job growth – since 2000, small businesses have generated 65% of net new jobs in the US, according to the SBA.

Homebase data is also valuable because it comes directly from businesses, instead of survey data, which is subject to user interpretation.

“It’s not a survey,” Tedeshi said, like some of the other high-frequency indicators such as the weekly Household Pulse Survey from the Census Bureau. “They have exact data on what their client base is doing.”

And, Homebase allows the public to download its raw data, important for economists that want to use it in a forecasting model.

“Homebase to their credit has been admirably transparent with their data on a high-frequency basis, even a daily basis,” said Tedeschi. Other reports, such as the ADP private payrolls release that precedes the jobs print, do not allow the public access to the raw data.

“In some ways that’s worse for economists,” said Tedeschi. “We don’t get to peer into the black box.”

To be sure, even though Homebase has proven to be a very useful tool to gauge the labour market recovery thus far, economists warn that it should still be used with some caution given the uncertainty of the pandemic.

Because Homebase data over-represents small businesses in some industries, “there’s always a concern that at some point the whole economy will move in a direction that is not 100% aligned with those particular sectors,” Dvorkin said.

Even with a few months of “very good predictions, still we need to be cautious and keep looking at many sources of additional information,” said Dvorkin. “We do not put our blind faith in just one indicator.”


Read more:
‘Unintended detrimental consequences’: A former Wall Street chief strategist says the Fed has driven flimsy stock-market highs that will come crashing down – and warns bullish day-traders will be futile to stop it

What Homebase is signalling for August

Despite widespread uncertainty, Homebase data remains one of the top high frequency indicators that economists are watching to forecast the upcoming August jobs report, due in early September.

The Homebase data is showing generally flat growth between July and August, said Ray Sandza, the vice president of data and analytics at the company. He added the typical “summer bulge” has not been seen this year.

Dvorkin’s prediction is similar. “All the recovery has halted almost completely, so for right now what we are predicting is that employment in August will show 140,000 fewer jobs relative to July,” said Dvorkin.

Factoring in seasonal adjustment, which corrects for different conditions in the summer months, he said the report will likely show “mild gains” of about 625,000 jobs.

The August report is important. For one, it will show how the US economy has shown another month of recovery amid the pandemic recession.

It may also factor into policy response. Democrats and Republicans are currently deadlocked in negotiations for the next stimulus bill, which could include further unemployment benefits and aid to small businesses, such as an extension of the SBA’s Payroll Protection Program. Studies – some that utilise Homebase data- have shown that PPP has saved millions of jobs.


Read more:
Stock-market wizard William O’Neil famously turned $US5,000 into $US200,000 in just a few years. Here’s the 7-part model he uses to sniff out winning stocks.