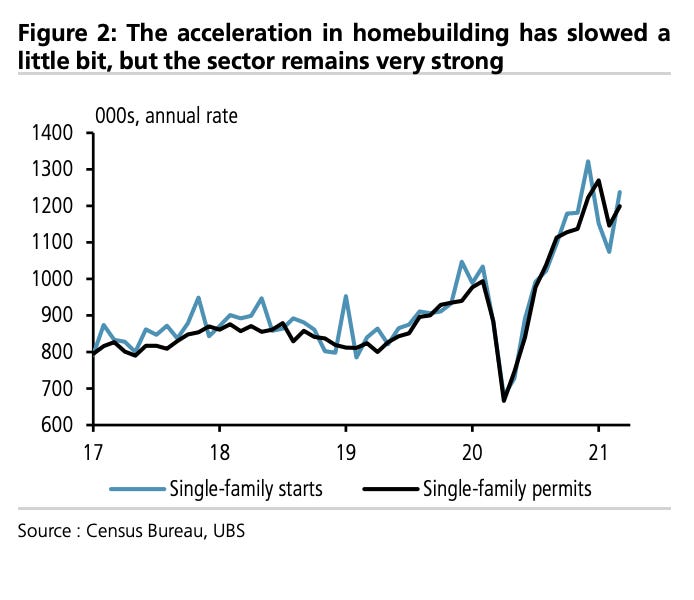 Insider has been warning of a potential inventory crisis in the housing market since last summer. It’s just gotten worse since then, with a record low number of homes for sale.

Builders are racing to catch up.

New residential construction surged more than anticipated in March as builders rushed to address the massive supply-demand imbalance in the housing market.

Home starts leaped to a seasonally adjusted annual rate of 1.74 million units last month, the Census Bureau said Friday. That’s up 19.4% from the revised February reading. Economists surveyed by Bloomberg expected starts to rise to a rate of 1.61 million. The reading places housing starts at their highest level since 2006 and marks the largest month-over-month gain since 1990.

The strong rebound was partially driven by a return to work after harsh winter storms hampered construction in February. Permits for residential construction also gained in March, though at a more modest rate.

“We may have overestimated the immediate storm-rebound by a little, and so expected more rebound to come in starts in April,” UBS economists led by Samuel Coffin said in a note. “But with permits on target in March, we continue to see the underlying trend in single-family activity at about a 1.2 million unit annual rate.”

The upswing in home construction comes as the market sits mired in a historic supply shortage. Low mortgage rates spurred a buying spree throughout the pandemic, as did a mass exodus from cities to suburbs. The pace of home sales cooled somewhat in February, but inventory remains at a record-low 1.03 million, according to the National Association of Realtors. At the current rate of purchases, that supply will only last for two months.

The shortage has shown up in home prices, which have shot higher in recent months. Prices gained 10.4% in February from the year-ago period, marking the largest one-year bounce since 2006. Prices also rose 1.2% month-over-month in February, signaling that, while the sales rate has slowed, costs are still climbing. The loftier prices stand to price potential homebuyers out of the market and make housing less accessible overall.

Still, filling the hole in the housing market isn’t as simple as going out and building more. The pandemic’s fallout disrupted all kinds of supply chains, including those critical for home construction. A widespread lumber shortage is estimated to be adding about $24,000 to the price of new homes, according to the National Association of Home Builders.

A decades-long slowdown in construction activity also contributed to the supply strains. The financial crisis and its damage to the US housing market led contractors to curb some building activity to prop up demand. Those actions are now coming back to haunt the housing market, which is estimated to be short some 4 million units, The Wall Street Journal reported, citing Freddie Mac data.

“We should have almost four million more housing units if we had kept up with demand the last few years,” Sam Khater, chief economist at Freddie Mac, told The Journal. “This is what you get when you underbuild for 10 years.”

Data suggests contractors are up for addressing the issue. Apart from the Friday housing-starts report, the National Association of Home Builders’ sentiment gauge edged higher in a preliminary April reading. A component measuring expected traffic of potential buyers rose to its highest level since November, signaling contractors are expecting steady demand throughout the building boom.