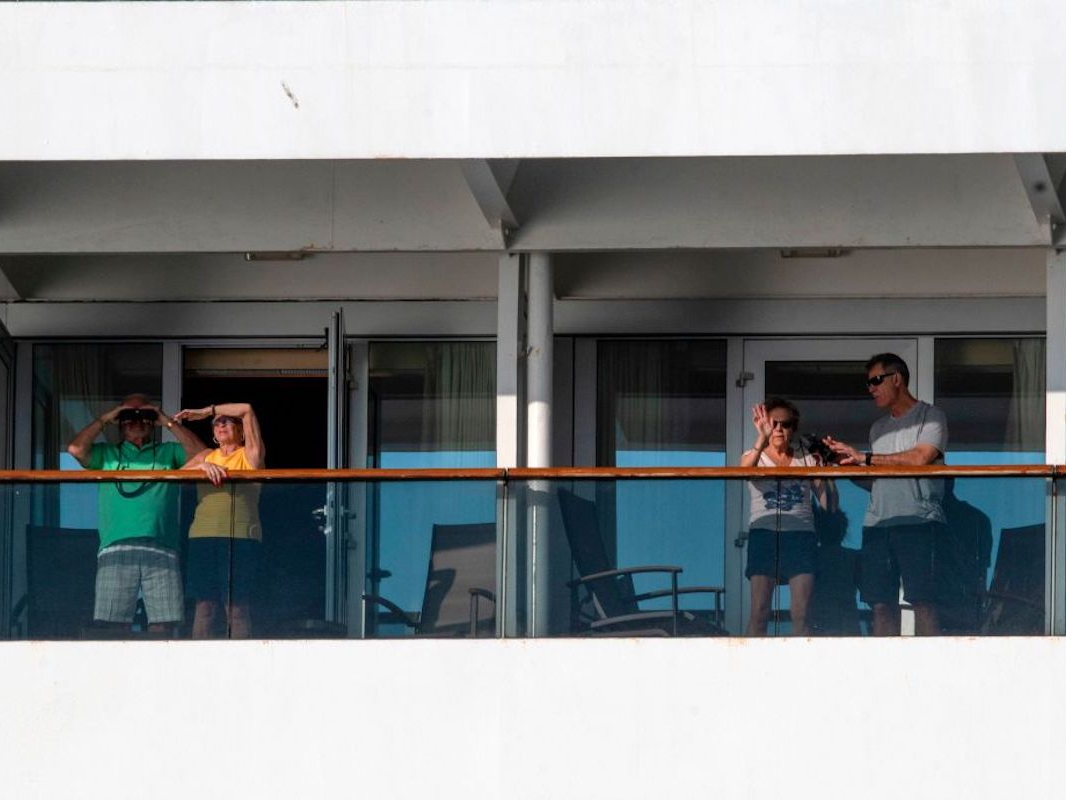 IVAN PISARENKO/AFP via Getty ImagesThe MS Zaandam and the MS Rotterdam will finally be permitted to enter US waters.

Broward County Commissioner Michael Udine tweeted on April 2 that the Unified Command task force and Carnival Corp. had reached an agreement regarding a plan of action, though Holland America said in a statement that it’s still waiting for confirmation about its plan to let passengers disembark.

Unified Command conferenced last night and reached cond. approval of Carnival’s Plan, subject to approval between Broward and Carnival.  Final document will be released this morning. As of now, ships remain outside US Waters. Look forward to seeing a SAFE plan for all to resolve

The Unified Command team featured representatives of the United States Coast Guard, the Broward County Sheriff’s Office, the Centres for Disease Control and Prevention, the Florida Department of Health, US Customs and Border Patrol, port pilots, and other officials.

In a March 31 Broward County Commission meeting, US Coast Guard Sector Miami Commander Captain Jo-Ann Burdian had that the Zaandam and the Rotterdam would not be permitted to enter US waters until Holland America’s parent company Carnival Corp. submitted a complete plan regarding the medical situation on each ship.

The Zaandam’s cruise was scheduled to last 14 days, embarking from Buenos Aires on March 7. For some passengers, the cruise would end after 14 days in San Antonio, Chile. For others, it was due to reach April 7 in Fort Lauderdale. Those plans were diverted because of the coronavirus, and the cruise ship was closed out of ports across South and Central America.

The Rotterdam was dispatched to rescue healthy passengers from the Zaandam, before both ships were permitted to transit the Panama Canal.

According to an April 1 statement from Holland America, 45 passengers still exhibit “mild” symptoms on board the ships. In the statement, the cruise line said there were 808 guests and 583 crew on the Rotterdam. and 442 guests and 603 crew on the Zaandam.

“There is humanity in the world”

On Wednesday, before the agreement to dock was reached, a 73-year-old passenger on the ship said she and her 81-year-old husband were told they would arrive in Florida on Thursday but they shouldn’t make travel plans.

Elberta Swan, emailing Business Insider from the ship late Thursday morning, said she and her husband are “very excited and happy” as they “anxiously await” more information about how they will get home to Texas.

“We are waiting to hear from Holland that it is official but they did tell us to pack our bags and put outside our door. They announced two more of their ships are here to provide support and one even honked at us in support. Holland said they have sanitised chartered buses to take us to chartered planes at the airport tomorrow.”

Holland told passengers those who are in isolation for illness must stay on the ship.

Swan and her husband are “just a little apprehensive about what happens next if we land home in Texas – like can we get our car, can we drive home, can we get food. But those are small things compared to what we have been through. There is humanity in the world,” she said.

The couple went from celebrating their 50th wedding anniversary on the cruise to communicating with friends and family through text about the latest news and combing the internet for information, she said on Wednesday.

“We see intentionally cruel and insensitive comments at the end of news articles who say ‘morons who take cruises should be left to die.’ Or that ‘anyone who votes to let the cruise dock should be kicked out of office.’ What has happened to the humanity that has helped other Americans in floods, earthquakes, etc?”

She previously told Business Insider that she and her husband felt “like sitting ducks,” waiting to be infected by the coronavirus.

Holland America Line is awaiting confirmation to disembark guests from Zaandam and Rotterdam in Fort Lauderdale, Florida. We remain fully engaged with the Broward Unified Command and other governmental and embassy authorities to resolve this humanitarian situation and get the nearly 1,200 well guests home immediately who are fit for travel per guidelines from the U.S. Centres for Disease Control and Prevention (CDC). Both ships are scheduled to arrive at the boundary of U.S. waters by early tomorrow morning and will remain outside U.S. waters while awaiting clearance to enter.

Guests fit for travel per the CDC would transfer straight from the ship to flights for onward travel home, the majority on charter flights. Out of an abundance of caution, these guests will be transported in coaches that will be sanitised, with limited person-to-person contact and while wearing masks. These provisions well exceed what the CDC have advised is necessary for their travel. Guests have not left the ship since March 14 and have self-isolated in their staterooms since March 22.

The approximately 45 guests who still have mild illness and are unfit to travel at this time will continue to isolate on board until recovered. Disembarkation would be at a later date to be determined and only after they have recovered and are in alignment with CDC guidelines for being fit to travel.

For the estimated less than ten people who need immediate critical care shoreside, we have secured approval from a local health system partner that they will accept them for treatment. This small number is the only group that will require any support from medical resources in Broward County and is necessary to prevent further harm to their health.

Since March 22, 97 guests (83 on Zaandam/14 on Rotterdam) and 136 crew on Zaandam (0 on Rotterdam) have presented with influenza-like symptoms. We have seen a significant decline in the presentation of new cases on Zaandam, with only 1 new case reporting in the past 24 hours.

There are 808 guests and 583 crew on Rotterdam. On Zaandam there are 442 guests and 603 crew.
Holland America Line calls for compassion and reason in the review and approval of our disembarkation plan by Florida officials and we are grateful for those that have supported our efforts.

We appreciate the support of President Trump in resolving the humanitarian plight of our guests – 311 of whom are American citizens and 52 of whom are residents of Florida. There are also four children under the age of 12 on board.

Due to global health concerns, Holland America Line made the decision to suspend its global cruise operations for 30 days and end its current cruises in progress as quickly as possible. At the time, Zaandam was sailing a South America cruise that began in Buenos Aires, Argentina, on March 7 that was originally scheduled to end at San Antonio, Chile, on March 21. Attempts were made and denied to disembark guests in Chile on March 15 and in other ports along its route to the U.S.

On March 21, Zaandam was originally scheduled to begin a 20-day South America and Panama Canal cruise from San Antonio, Chile, and end in Fort Lauderdale on April 7. On March 30 an additional 30-day extension of cruise cancellations was announced, including departures through May 14.