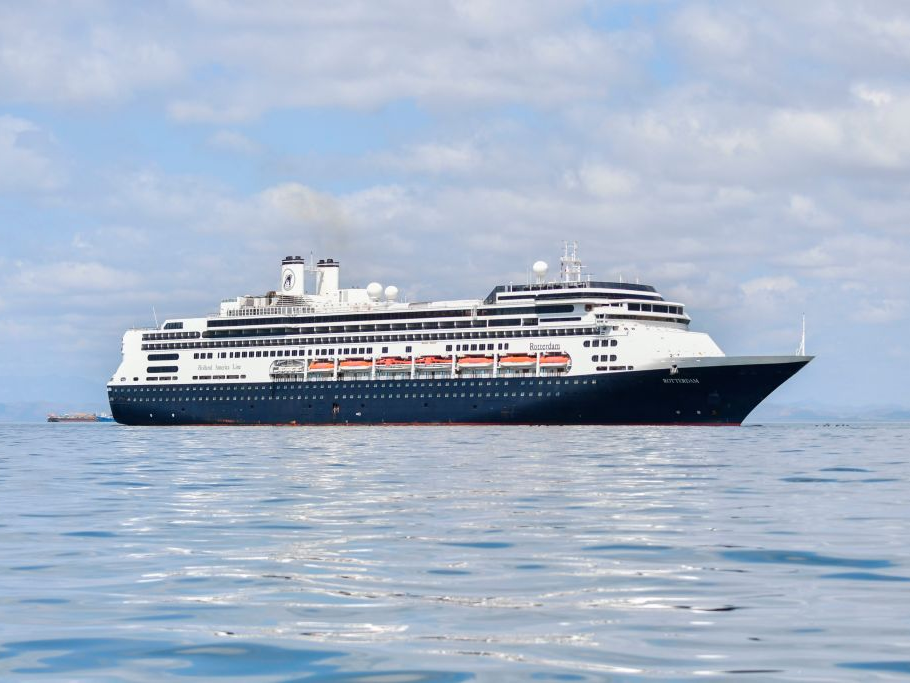 LUIS ACOSTA/AFP via Getty ImagesThe journey is finally coming to an end for some passengers.

The MS Zaandam was a mystery cruise long before the fever began to spread about its decks. The ship’s itinerary was cancelled on March 15 due to the ongoing coronavirus pandemic, and the fact that South American ports were closing themselves off to cruise ship traffic. The captain announced that the ship would sail “north,” to allow guests to disembark in an undetermined destination.

“We are sincerely sorry that your voyage has come to such an abrupt end,” a letter that was sent to guests stated. “If you have cruised with Holland America Line before you know this is absolutely not how we endeavour to treat our guests or have their cruise experience go.”

Within days, the mystery around the ship would darken, the central question within its decks shifting from where the ship would go to if its passengers would ever reach home.

The ordeal of the Zaandam and the Rotterdam illustrates the uncertainty around dealing with a humanitarian crisis aboard a cruise ship during an international pandemic, both on the part of governments and cruise lines. It also reveals the measures one cruise line found itself taking to get passengers back on land after a highly-contagious illness blazed through one of its ships.

Now, around two weeks after the Zaandam cancelled its ill-fated cruise, the ship’s healthy passengers are starting to disembark. For others still stuck on the ships – namely, those displaying influenza-like symptoms – the journey is not yet at an end, however.

‘We’re now on a mystery cruise’

The Zaandam cast off from Buenos Aires, Argentina, on March 7. Four days later, the World Health Organisation designated the coronavirus a “pandemic.” Before its cancellation a little over a week into its itinerary, the cruise included stops in Montevideo, Uruguay, and the Falkland Islands. The ship was slated to conclude its voyage in San Antonio, Chile on March 21. Many passengers on board had signed up for back-to-back cruises, and the next leg would ultimately see them conclude their journey in Fort Lauderdale on April 7. 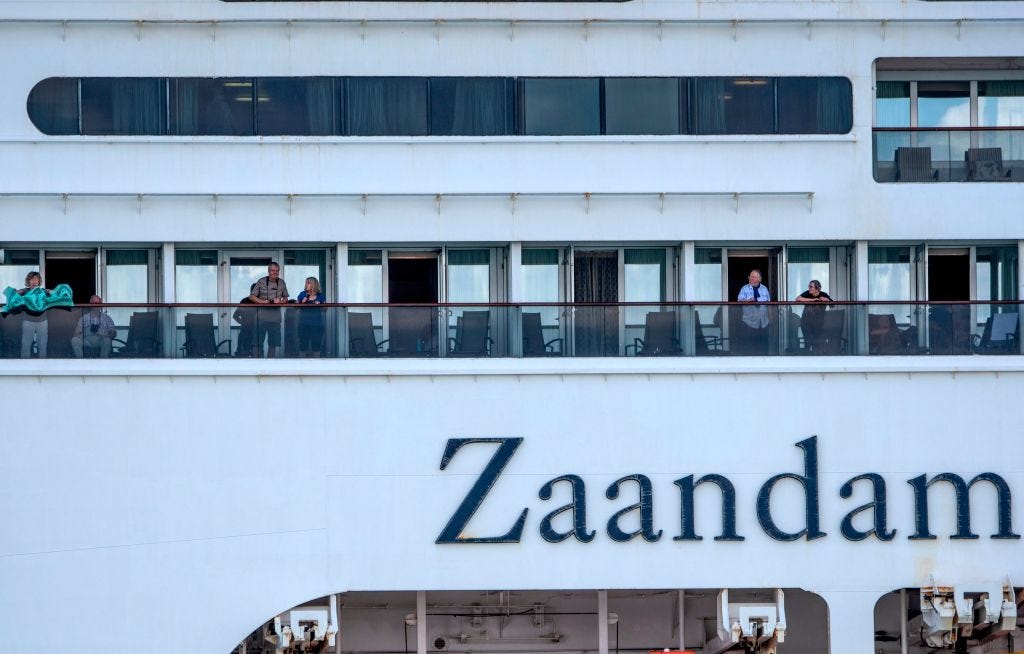 Passengers tried to keep up an optimistic mood after the cancellation, even gathering together to toast St. Patrick’s Day. Guests harbored some concerns over where the ship would end up, but being at sea seemed safer than being on land, as the number of cases of coronavirus around the world continued to spike.

“We’re now on a mystery cruise because we have no idea where we’re going,” an American passenger told Business Insider.

But then people began to fall ill with influenza-like symptoms, with the sickness largely affecting crew members onboard. Starting March 22, guests were confined to their staterooms, and left reliant on crew members for meal deliveries and laundry services.

Passengers told Business Insider that the crew’s performance was admirable, while the captain seemed to always keep the entire ship abreast of what was going on. Guests confined to rooms without balconies were even brought up on deck in shifts, to enjoy some fresh air.

But still, as days drew on and the journey around South and Central America continued without a clear destination, the lighthearted spirit onboard evaporated. It was as if the Zaandam had become some modern equivalent of a medieval plague ship.

The MS Rotterdam, another Holland America ship with over 600 crew members on board, had a secret task when it departed from Puerto Vallarta, Mexico on the afternoon of March 22. The ship needed to bring crucial medical supplies to the Zaandam, a stricken sister ship filled with feverish crew members. 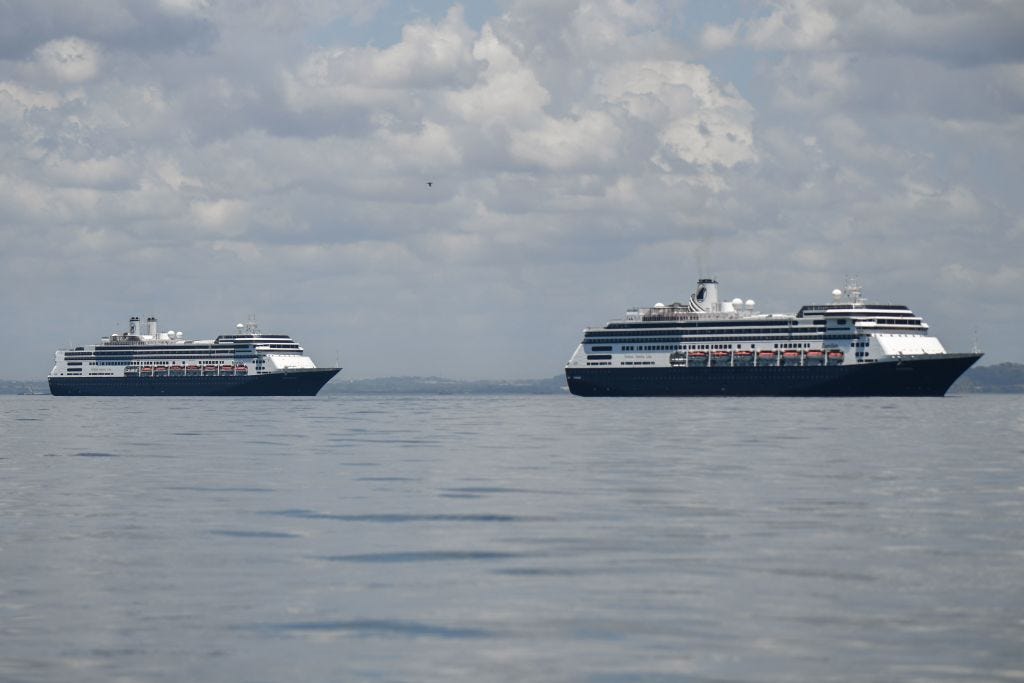 But one Rotterdam crew member said Holland America “did not care for the health of our crew” by tasking the ship with such a mission, as the terms of the assignment changed while the vessel was en route to the Zaandam. Instead of just dropping off medical equipment, the Rotterdam would now be picking up the healthy passengers from the Zaandam, to prevent the as-of-then-undiagnosed sickness from spreading more.

The Rotterdam crew member spoke of a feeling that the cruise line was taking “healthy crew members from all over the world” and dropping them “in the middle of the virus.” The Rotterdam circulated a memo telling crew members that “nobody will be pushed to do something that doesn’t feel right to them,” but crew members said they still felt tricked.

The memo offered an explanation for why Rotterdam crew members were not kept more aware of the nature of their mission, saying the situation on the Zaandam “escalated very rapidly.”

In audio leaked to Business Insider, the captain of the Rotterdam told passengers that the ship needed to act “in order to protect the Zaandam guests and crew members.”

“We are mariners, and we consider this our duty and our obligation, and so in the tradition, we are proceeding with helping our sister ship the Zaandam,” the captain of the Rotterdam said. “Our guests and our fellow crew members on board need us. There are no easy choices here.”

But the captain also shared some tragic news with crew members preparing for the March 26 rendezvous off the coast of Ecuador.

“I am also sad to share that four older Zaandam guests have passed away,” the captain of the MS Rotterdam said in the recording of a ship-wide announcement provided to Business Insider.

Four elderly guests had died over the course of the Zaandam’s odyssey around South America. The captain said three died around March 26, according to audio leaked from the Rotterdam, while another died a few days earlier. Holland America has not yet released the cause of death for the four people.

Over the course of March 28, “well guests” – anyone “showing no signs of illness, including fever” – were packed into small boats and zipped over to the Rotterdam. Priority was given to passengers over the age of 70, then the rest were shuttled over to the new vessel. The guests passed through the ship into their new staterooms, where they were kept in self-isolation once more.

Sick guests and their “close contacts” remained behind on the Zaandam, which received supplies like COVID-19 tests and ventilators.

With two ships now sharing in the brewing crisis, Holland America turned its attention to bringing its ships into port. Negotiations began with Panamanian authorities. Holland America wanted to sail through the Panama Canal and head for Fort Lauderdale, where the Zaandam was initially supposed to end up anyway. The cruise line also considered having the Rotterdam zip up toward California, although that trip would have taken days longer.

But officials from Panama’s Ministry of Health were concerned.

On March 28, the Panama Canal Authority released a statement saying that the Zaandam would not be permitted to transit the canal.

“Like all vessels that use the Panama Canal, the Zaandam had to comply with the regulations on health and prevention of contagious diseases,” the statement said. “Holland America confirmed there were COVID-19 cases on board, and following the protocol laid out by the Ministry of Health (MINSA), the vessel was placed under quarantine and cannot make any port operations or transit the Canal.”

The following day, however, the tides would change for the Zaandam and the Rotterdam. The Panama Canal Authority said it would facilitate the transit of both ships “under extraordinary conditions and for humanitarian reasons.” The independent government body responsible for the canal said that the two ships had been cleared for transit with the “authorization of Panama’s Ministry of Health.”

So the two Holland America ships passed through the Panama Canal one after the other, with canal authorities taking steps “to reduce to a minimum the number of Canal employees involved in the transit.” But the canal was not the final obstacle that the two ships would face before reaching safe harbour.

‘People who aren’t even Floridians’

In order to reach Fort Lauderdale’s Port Everglades, the port where the Zaandam was initially supposed to arrive on April 7, Holland America and its parent company Carnival Corp. needed to win over a body of local authorities. Namely, officials in Florida’s Broward County needed to be convinced that allowing passengers to disembark from the ship would not exacerbate the coronavirus crisis in the region. 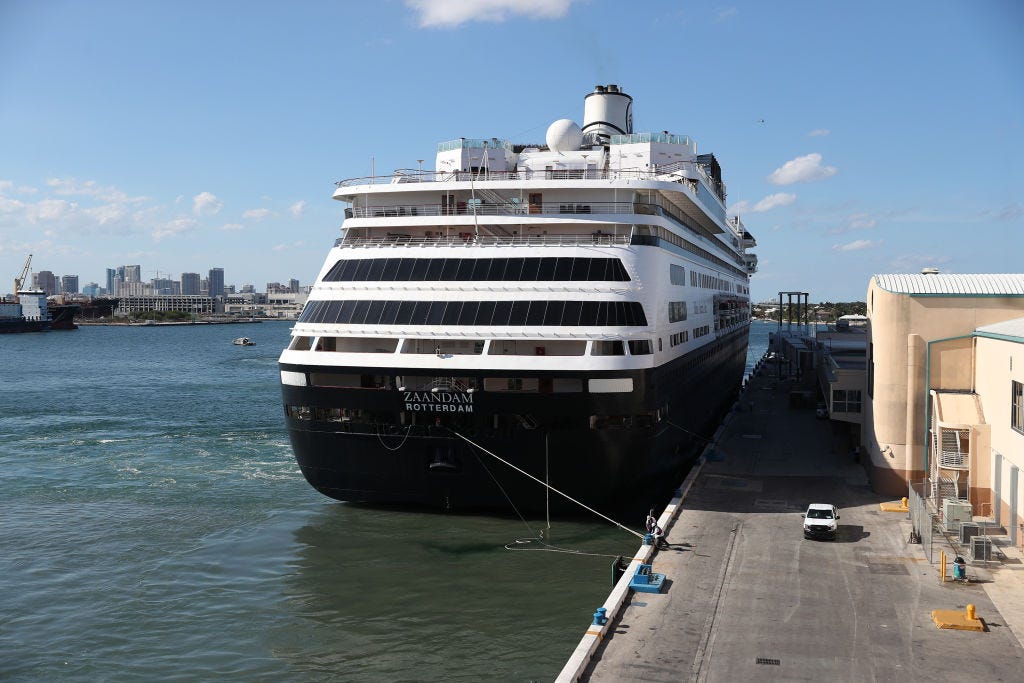 The Port Everglades Unified Command was set up to handle the crisis, consisting of representatives of the United States Coast Guard, the Broward County Sheriff’s Office, the Centres for Disease Control and Prevention, the Florida Department of Health, US Customs and Border Patrol, port pilots, and other officials.

Florida authorities rejected at least one disembarkation plan from Carnival Corp., on the basis that the ships posed “hazardous conditions.”

Carnival sent its Chief Maritime Officer William Burke to plead the ship’s case at a March 31 meeting of the Broward County Commission. He described Port Everglades as “the place of last resort,” and described how the Zaandam was barred from Chile, Peru, Ecuador, Panama, and Colombia.

During the meeting, Broward County Commissioner Michael Udine said that, despite the fraught situation, “no one wants to turn anyone away” regarding rendering aid to sick passengers trapped on the ships. He also expressed frustration that his municipality was not receiving more federal assistance in dealing with the stranded cruises.

“Why is this being hurled on the people with the least amount of ability to solve this?” Udine said. “Where is this the idea of bringing this to a naval station? I just don’t understand how this has simply become a Broward County issue?”

But the situation was already starting to swell into an international incident. Commissioners spoke at the meeting of fielding messages from politicians across the country, calling to advocate for constituents onboard the Zaandam and the Rotterdam. Meanwhile, Florida Governor Ron DeSantis sparked the ire of passengers’ families by characterising those onboard as “foreign nationals” who might drain the Sunshine State’s resources in the fight against the coronavirus.

“We cannot have people who aren’t even Floridians dumped into South Florida, using up those valuable resources,” he told Fox News’ Ainsley Earhardt on March 30.

But the governor’s political ally, United States President Donald Trump, struck a different tone. Speaking at a March 31 press briefing, Trump called on Florida to open its ports to the Holland America vessels for humanitarian reasons.

“I’m going to do what’s right not only for us but for humanity,” the president said during Tuesday night’s White House press briefing. “These are two big ships and they have a lot of very sick people.” 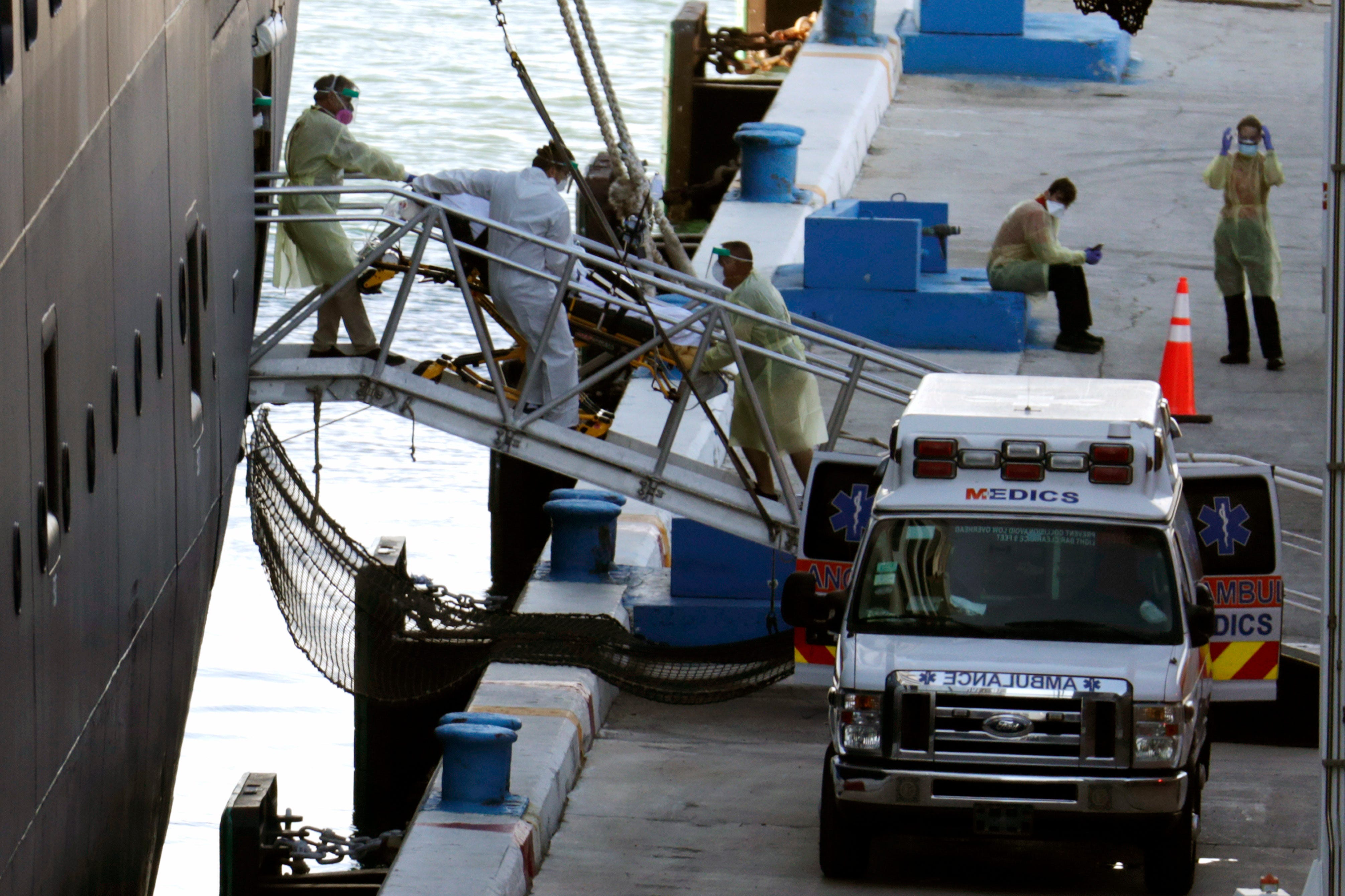 Associated PressA person on a stretcher is removed from the Zaandam at Port Everglades.

Some 14 guests with “severe illness and critical care needs” were immediately evacuated to local hospitals in Broward County. That day, healthy passengers residing in Florida were also released and driven home.

But starting on Friday and leading into early Saturday morning, over 1,110 former Holland America passengers will board charter flights in Fort Lauderdale’s airport. The cruise line has booked flights to Toronto, Atlanta, San Francisco, Paris, Frankfurt, and London, which are set to carry an estimated 1,164 passengers.

No crew members from the Zaandam and the Rotterdam will be permitted to disembark in Port Everglades, as of yet.

For those sick passengers and crew members, the ships may have come to harbour, but the journey is not yet finished.