From Thanksgiving to Labour Day, these 9 holidays have surprisingly dark origins 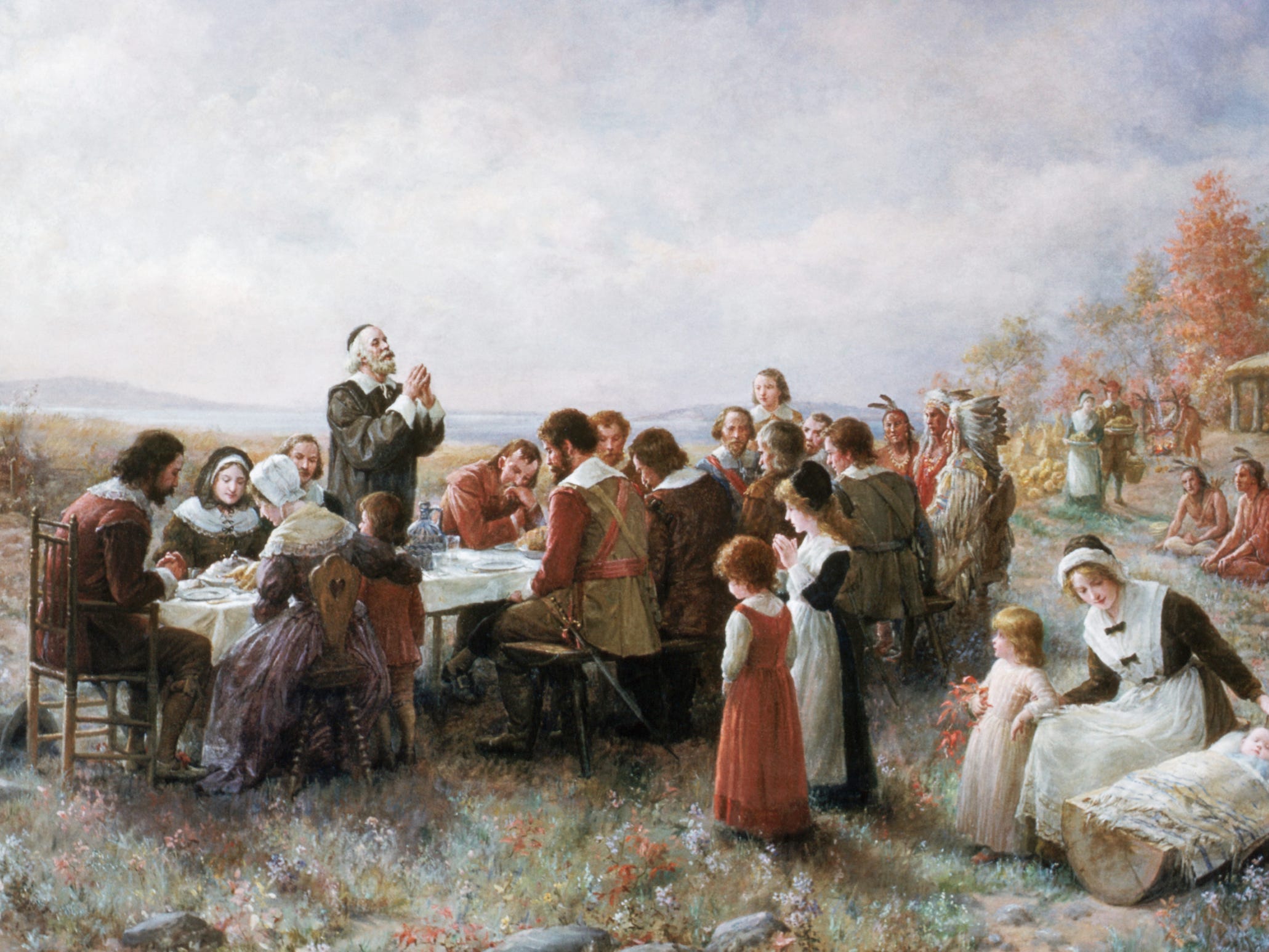 Barney Burstein/Corbis/VCG via Getty ImagesOur popular understanding of the history of Thanksgiving is flawed.

Think about your favourite holiday â€” do you know the story behind it? Even if it’s celebrated with parades, barbecues, and gifts, it may have a surprisingly dark history.

Labour Day, for example, is celebrated with a day off work and a final barbecue before the end of summer, but it was created in 1894 after a bloody strike. And while Purim is celebrated with costumes and booze, really, it’s celebrating narrowly avoided mass murder.

Keep scrolling to learn about the dark and potentially unhappy origin stories of some of your favourite holidays. 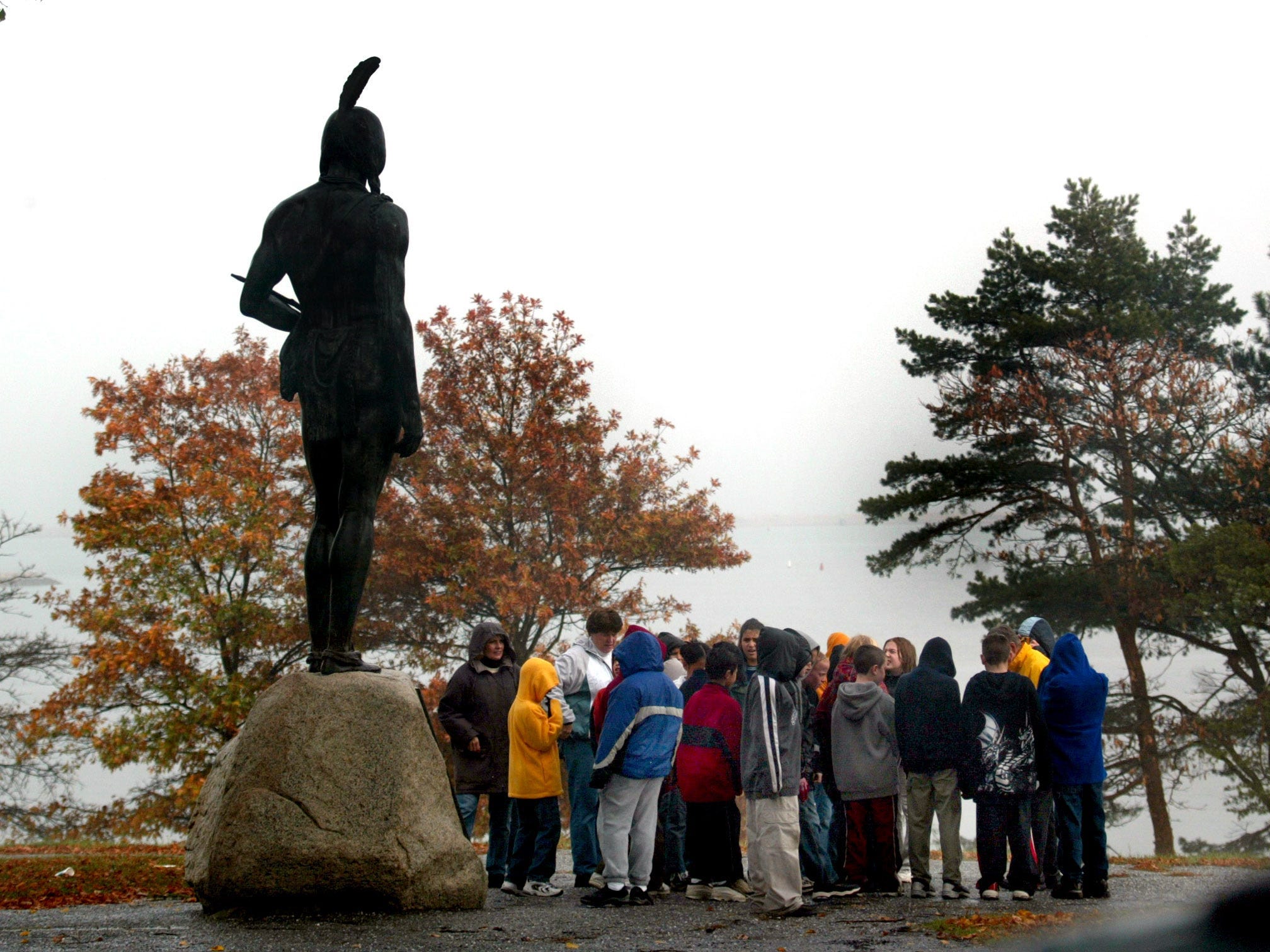 Tom Herde/The Boston Globe via Getty ImagesA group of school kids gather at the statue of Massasoit, ‘Great Sachem of the Wampanoag’s,’ on the hill overlooking Plymouth Rock and the harbour.

Almost every American student learns about the story of the original Thanksgiving in school: In 1621, the new American colonists were struggling to survive in the harsh weather, and that the Native Americans helped out and shared food out of the kindness of their hearts.

The darkness of the holiday stems from two things. First, things were truly harrowing for the new “Americans.” They were suffering from exposure, scurvy, and outbreaks of contagious diseases. Second, the way students are taught about the holiday makes it seem like the colonists and the indigenous people had a healthy, mutually beneficial relationship â€” that wasn’t the case. In fact, the two became embroiled in a devastating, bloody war just a generation after the famous feast.

To this day, people are so upset about the holiday and the way it is portrayed that protesters congregate every year on Thanksgiving, and some say it should be cancelled for good. They have taken to calling it a “National Day of Mourning.” 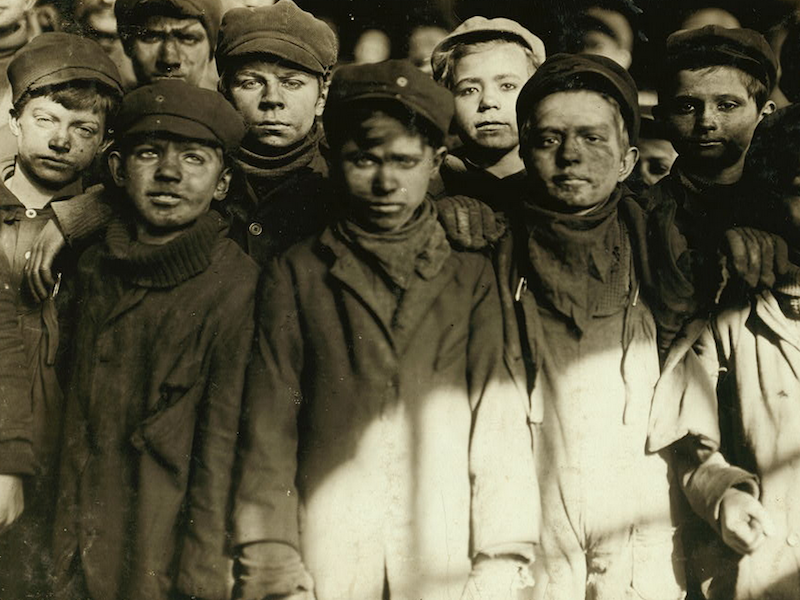 Library of CongressTypical child workers in the early 1900s.

Labour Day was recognised as a national holiday in 1894. It honours the workers of America, and all the contributions they have made to society, as well as all of their sacrifices. Today, it’s best known as a three-day weekend that signifies the end of summer and wearing white.

As The History Channel notes, Labour Day was recognised as a holiday during one of the darkest chapters in American history for laborers. The average American worker at the time was working 12-hour days for seven days a week, in unsanitary and dangerous conditions that included poor ventilation and lack of access to bathrooms. There were also little-to-no restrictions on child labour.

The conditions gave rise to more vocal labour unions, whose members would organise rallies to call for better pay and hours. On September 5, 1882, in New York City, 10,000 workers took the day off unpaid to march through the streets.

Labour Day was established after the American Railroad Union organised a nationwide boycott of Pullman railway cars, derailing both shipping and passenger travel across America. The strike resulted in riots in which dozens of people died and millions of dollars of damage was inflicted. To restore the relationship between the government and workers, Labour Day was created.

Purim commemorates the saving of the Jewish people from mass murder Purim is a biblical Jewish holiday that is today celebrated by dressing up in costumes (much like Halloween), drinking wine, and eating triangle-shaped cookies called hamantaschen.

But the backstory is dark. Purim, which means “lots” (as in lottery) in ancient Persian, has been celebrated as early as 124 BCE. The story goes that King Achashverosh of Persia wanted his wife Vashti to show off her beauty to everyone in the kingdom. When she refused, he decided to find a new wife by holding a beauty contest. Esther, a Jewish orphan raised by her uncle Mordechai, became the new Queen of Persia.

At around the same time, one of the king’s advisers, Haman, became power hungry, demanding that everyone bow down to him. When Mordechai refused, claiming that, as a Jew, he would bow to no one, Haman decided to kill all Jews in the kingdom, choosing the date of this future genocide via lottery, which is what gives the holiday its name.

Esther, whom the king hadn’t known was Jewish, came clean and pleaded with him to spare them â€” and he agreed.

So while the story has a happy ending, it is based on attempted mass murder. 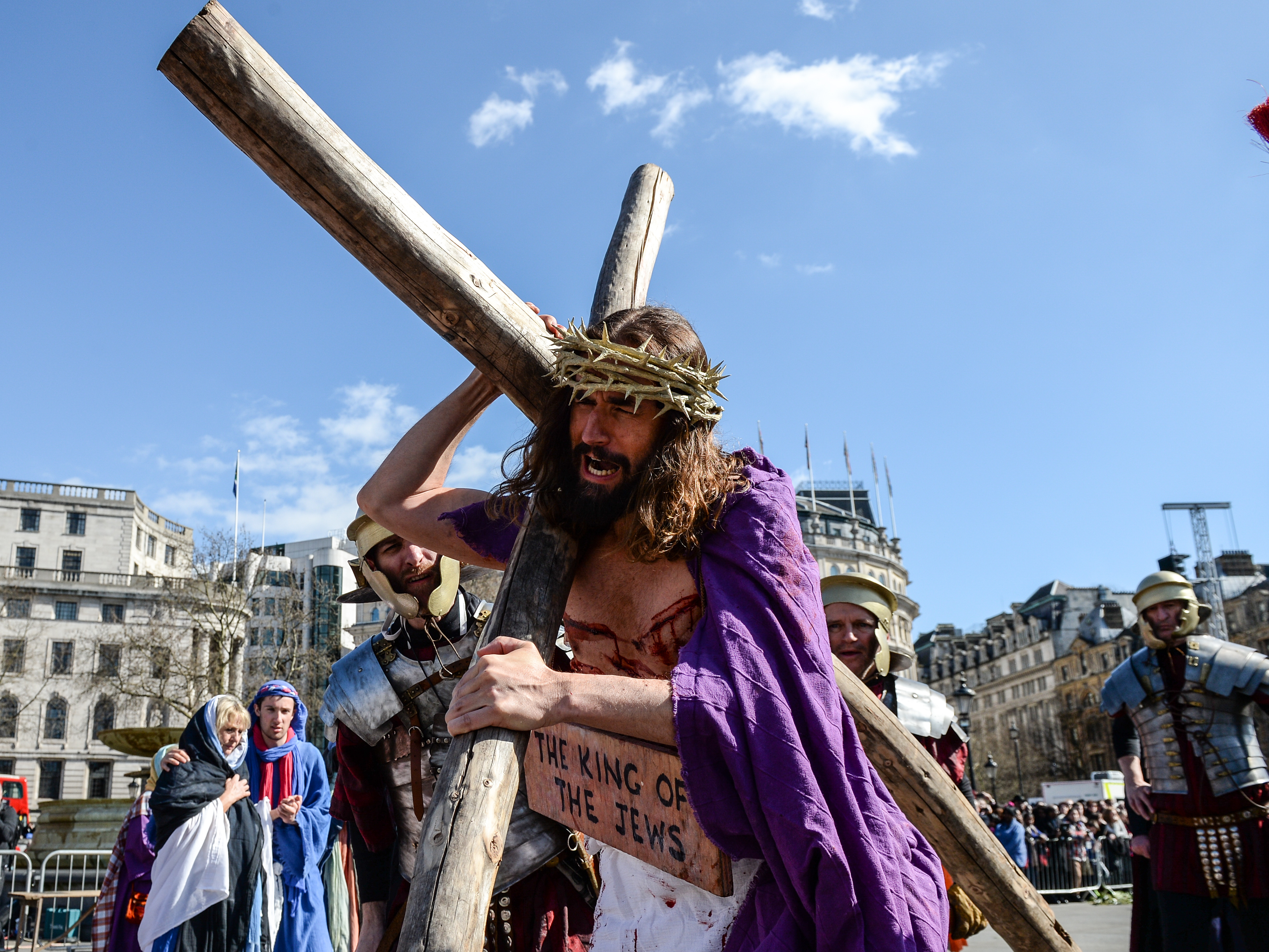 Chris Ratcliffe/Getty ImagesActor James Burke-Dunsmore carries the crucifix whilst playing Jesus during The Wintershall’s ‘The Passion of Jesus’ in front of crowds on Good Friday.

Good Friday marks the day that Jesus Christ was painfully flogged and crucified by the Romans.

It falls on the Friday preceding Easter Sunday, which also isn’t as happy as the pastel coloured eggs and chocolate bunnies would lead you to believe, but since it’s about someone coming back to life, as opposed to a gruesome execution, it doesn’t make the cut.

Columbus Day celebrates Christopher Columbus’ ‘discovery’ of America, even though his arrival decimated the population of native people 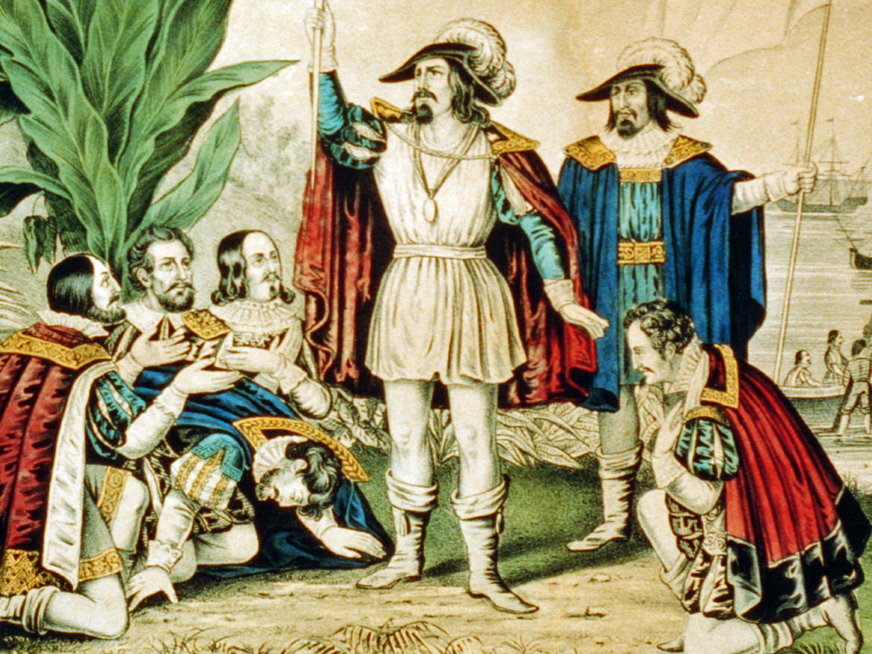 Library of Congress‘The Landing of Columbus.’

Columbus Day, which commemorates the landing of Christopher Columbus in the Americas, was celebrated unofficially for years before becoming an official federal holiday in 1937.

Most kids across the US are taught that Columbus “discovered” the United States of America when, in 1492, Columbus sailed the ocean blue. In reality, he didn’t discover America because people had already been living there. In fact, his arrival decimated the population of natives that were already living there by exposing them to disease, forcing them to convert to Christianity, and turning them into slaves.

It’s no wonder people are calling for a name change, like Indigenous Peoples Day. St. Patrick’s Day is a polarising holiday. While most see it as a day to drink green beer and celebrate all things Irish, in fact it was created to honour the death of St. Patrick, patron saint of Ireland.

St. Patrick’s life wasn’t a particularly happy one either. He was kidnapped and sold into slavery in Ireland at age 16. He later escaped, but eventually returned to Ireland as an adult, and is credited with “bringing” Christianity to the Emerald Isle. While Ireland is one of the only countries to peacefully convert to Christianity, it still bears remembering that much of their culture was wiped out once they assimilated. Passover is another Jewish holiday that revolves around drinking wine â€” four glasses, to be exact. And it is, sort of, a happy holiday. It celebrates the freedom of the Jewish people after escaping slavery in Egypt.

But according to the Torah, before the Jewish people could escape Egypt, God sent 10 plagues upon the Egyptian people, including turning the Nile River into blood, pitching darkness all over the country for three days, and, most tragically, killing the first-born child in every household. It’s hard to celebrate freedom when reminded of the innocent children that were killed. Jeff J Mitchell/Getty ImagesToday, Valentine’s Day is all about hearts and lovers.

Even though Valentine’s Day has emerged as a kind of Hallmark holiday that celebrates love and romance with candy and chocolate, it’s not entirely clear how this came to be. According to The History Channel, there were three separate St. Valentines, all who were martyrs.

The first Valentine was a priest in the time of Emperor Claudius, in 3rd century Rome. Claudius reportedly banned marriage, but Valentine defied him, secretly marrying couples anyway. Legend has it that his surreptitious activity was discovered, and that he was put to death for it on February 14.

Another Valentine is believed to have helped Christian prisoners escape from harsh Roman prisons, and was also killed for his actions on February 14.

And another legend still is about an imprisoned Valentine that fell in love with a woman, perhaps the jailer’s daughter, and sent her the first Valentine’s card, signed “From your Valentine.”

But whether Saint Valentine was killed for performing secret marriages, for helping people escape from abusive prisons, or in prison himself, no story explains why we celebrate the holiday the way we do today. 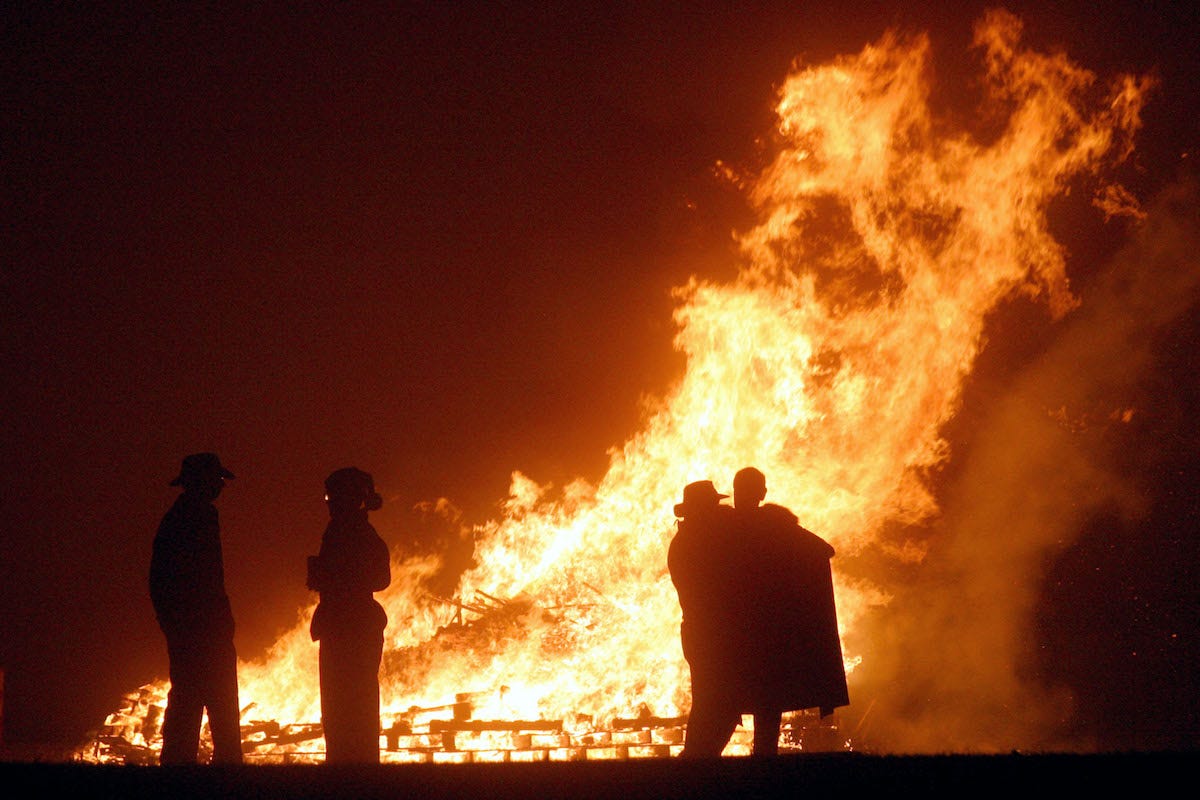 Halloween originated from a Celtic festival called Samhain, which was celebrated 2,000 years ago and revolved around lighting bonfires and wearing costumes to ward off spirits and fairies â€” yes, Halloween began because people truly believed that it was a time when dead spirits would rise again, and walk among them. Back then, costumes acted as protection, not just an excuse to show off your Pinterest skills.

Not much is known about the ancient holiday since there are no written records, though per Encyclopaedia Britannica, “it was a time fraught with danger, charged with fear, and full of supernatural episodes.”