As Hobby Lobby continues its mission to keep doors open in the face of the coronavirus, the arts-and-crafts retailer is quietly reopening stores around the country, defying states’ stay-at-home policies.

On Monday, the company resumed business in several states where it had been forced to temporarily close. A March 28 memo obtained by Business Insider equipped managers with talking points for “how to respond and communicate if visited by a local authority that asks why we are open.”

In a separate leaked note sent last week, executives wrote that the company “is going to make every effort to continue working the employees.”

The reopenings include stores in Ohio and Wisconsin – which both enacted strict shelter-in-place orders on March 24 – where nearly all Hobby Lobby locations have been reopened after shuttering for only one week. During calls Business Insider made to each location, employees confirmed that all 19 Hobby Lobby locations in Ohio were open as of Monday afternoon, as were 17 out of 20 stores in Wisconsin that were still listed as “temporarily closed” on Google.

Of the three stores closed in Wisconsin, at least one was forcibly shuttered by police officers after briefly opening on Monday, according to the Milwaukee Journal Sentinel. An employee at that store told Business Insider on Monday it was closed but that employees were there “working on projects.” A similar incident was reported in Jeffersonville, Indiana, where local authorities forced a store to close after it was open for one hour on Monday morning, the CBS-affiliated news outlet WLKY reported.

Hobby Lobby did not respond to Business Insider’s request for comment.

‘I want to stay home to stop the spread of the virus.”

Despite mandates in at least 32 states calling for the closure of nonessential businesses, Hobby Lobby appears to be doing everything in its power to avoid shutting its doors.

Four Hobby Lobby employees in North Carolina, Ohio, and another state in the Midwest – who spoke with Business Insider on condition of anonymity for fear of retribution but whose employment statuses and identities have been confirmed – said they continued to receive contradictory instructions regarding store operations.

“The main thing is they’re not really telling us anything,” one employee in Ohio said. “Last Monday we closed because we were a nonessential business basically, and that was fine with me. Not even four days later, we’re reopened because they’re saying we’re essential now.”

The employee, who is also a military veteran with post-traumatic stress disorder, said his attempts to contact the Ohio Department of Health and the office of Gov. Mike DeWine have gone unanswered.

“My wife is pretty furious. We’re trying to take care of my mother who had knee surgery and also has multiple sclerosis, which is an autoimmune disease. I don’t want to bring it home and get her infected,” he said. “I used to love working for this company, but since this pandemic, I’ve seen how callous and irresponsible it has been.”

“This has all been so stressful and exhausting,” an employee in a nearby Midwestern state, where stores have yet to close despite mandates from lawmakers, said. “I don’t want to stay home because I’m too lazy to work. I want to stay home to do my part to stop the spread of the virus.” 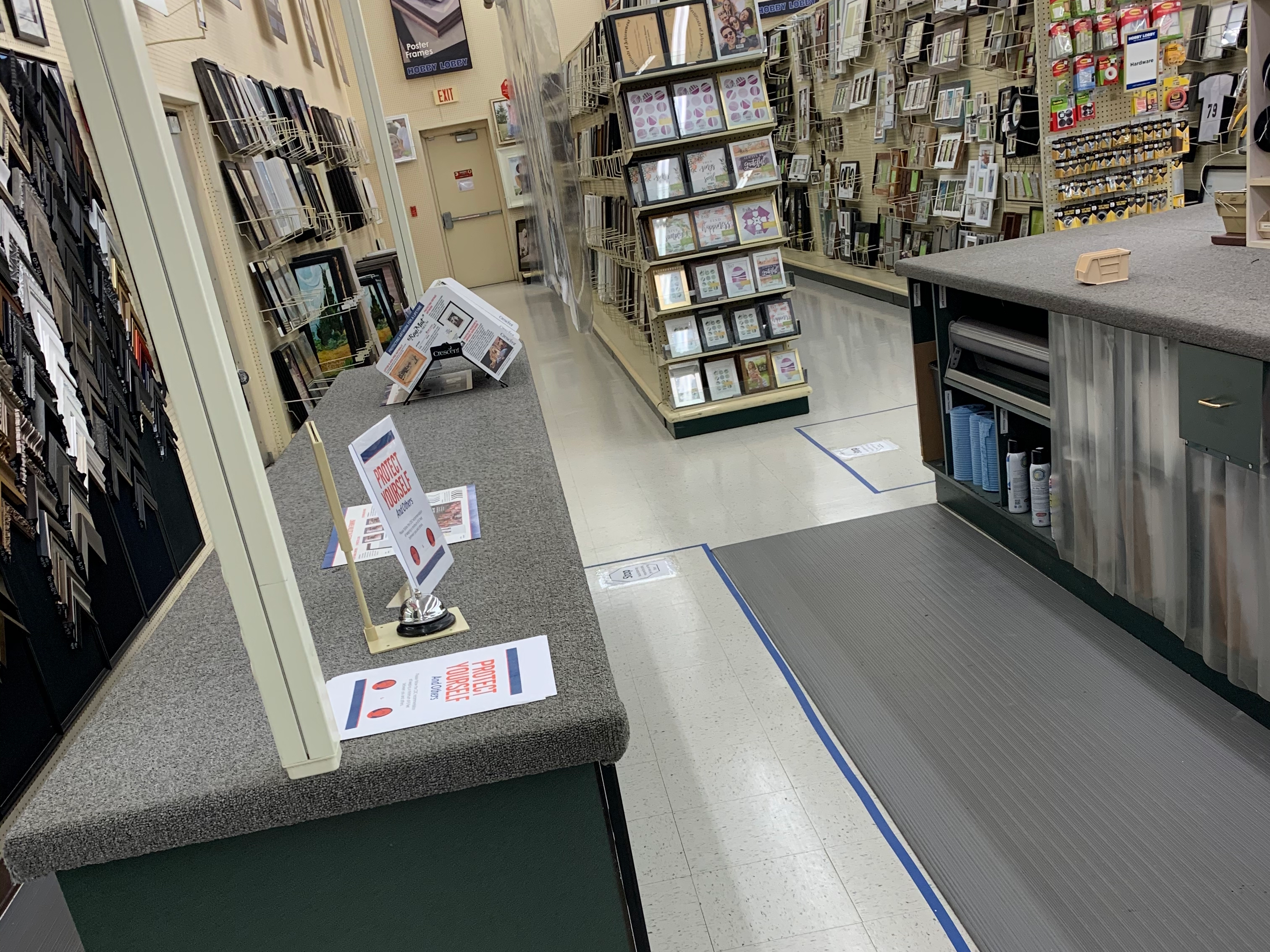 Courtesy of Hobby Lobby employeeSigns and tape for social distancing in a Hobby Lobby store.

Elsewhere, in states such as Colorado and North Carolina – which enacted stay-at-home protocols in the past few days – Hobby Lobby is avoiding shutting down altogether, insisting it is “essential” because it sells educational materials and products for home-based businesses.

However, employees told Business Insider they were frustrated by these justifications, given that Hobby Lobby does not sell universally accepted essential items like food, toiletries, medicine, and cleaning products. While big-box stores like Walmart and Target provide services widely considered essential, craft stores are not on the list, nor are they included in guidance issued by the Department of Homeland Security.

“They are not exempt,” Conor Cahill, the press secretary for Colorado Gov. Jared Polis, told The Denver Post regarding Hobby Lobby on Monday.

Adding to their frustration, two employees said the company’s warehouse in Oklahoma City has been closed until further notice, meaning stores aren’t even able to restock the inventory that managers and executives are claiming are essential.

“Hobby Lobby is fighting that we are an essential store,” a Hobby Lobby employee in North Carolina said. “There is absolutely nothing in Hobby Lobby worth spreading this illness. I’m honestly appalled at this company and the way it doesn’t care for its employees and only about making their money.”

The employees said they were worried about their personal safety and a lack of resources needed to maintain a clean and sanitised workspace. The North Carolina employee said her team was not allowed to wear gloves or masks while working because management told them “it would make customers uncomfortable.”

Others are concerned their stores aren’t equipped with adequate cleaning supplies or the manpower needed to clean effectively. Hobby Lobby executives began slashing jobs and cutting salaries last week to cut costs in states with stores required to close because of state regulations.

“Management is being so secretive and won’t be open with what’s going on,” another Ohio employee wrote in an email to Business Insider. “We also don’t have the employees to do the extensive cleaning that they say we are doing on the website because payroll keeps telling management to cut hours. I’m just very anxious about this whole thing and don’t understand why no one is helping us employees out with this situation.”