The US military is getting a new pistol. Here are the sidearms it's carried into battle since first taking on the British 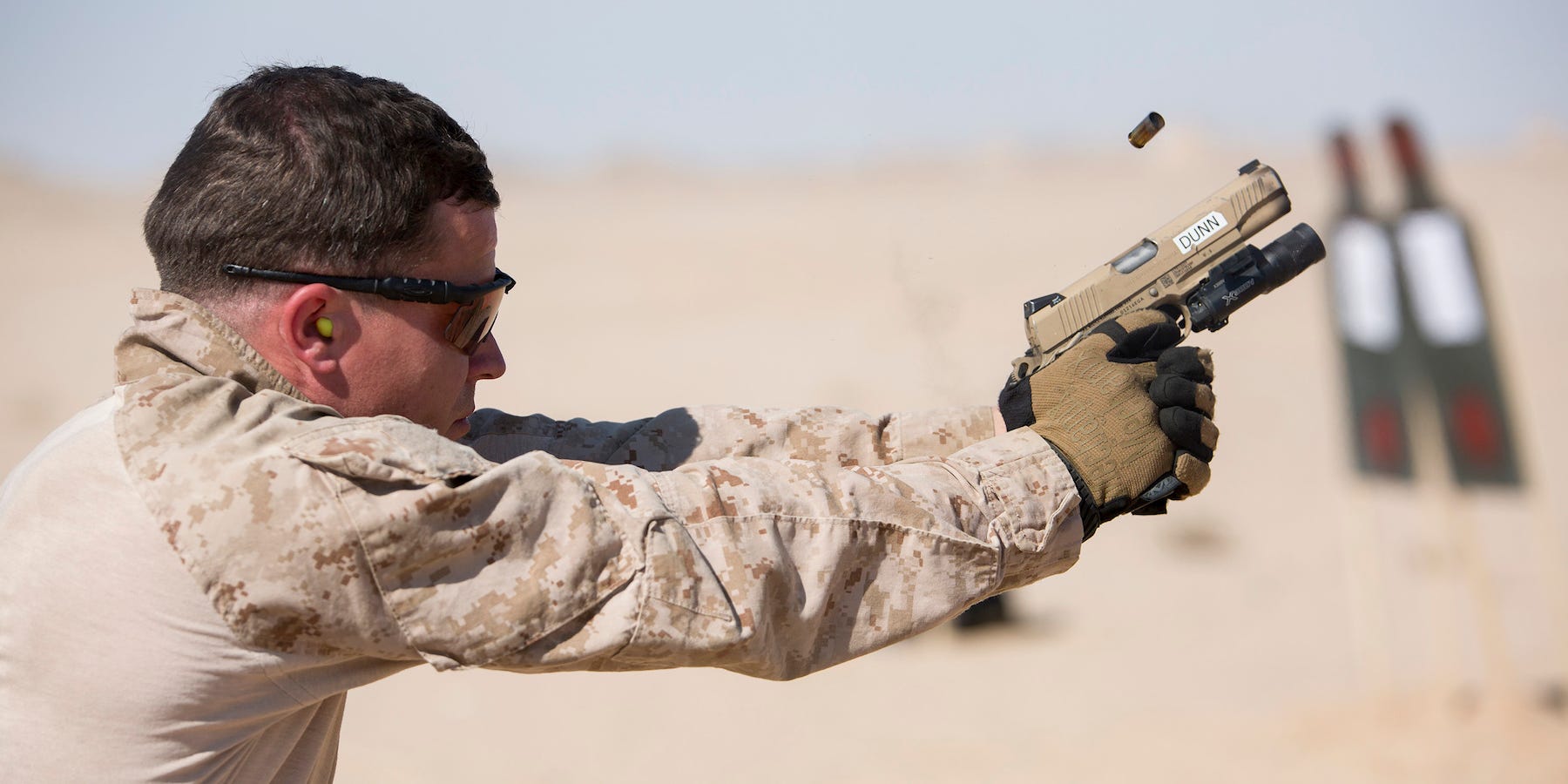 US soldiers, sailors, airmen, and Marines are quickly receiving the the military’s newest pistols in massive numbers.

Three years after the M17 was adopted as the military’s new sidearm, Sig Sauer has delivered well over 100,000 of the handguns, which are based on its P320 model.

The M17 and the compact M18 variant are the latest in a long line of sidearms that US troops have carried into battle over the past 244 years. 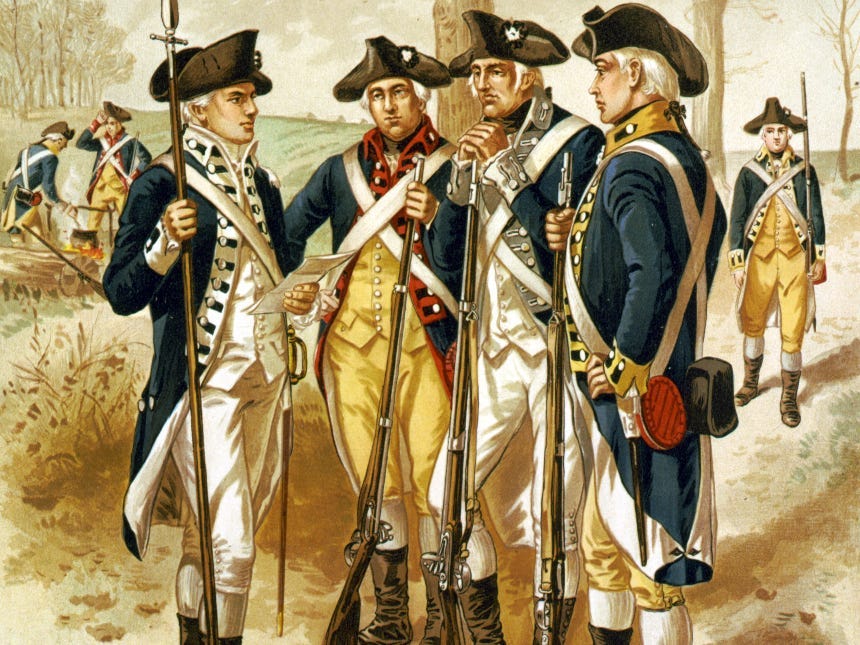 The American military’s early sidearms were often privately owned. Officers, able to afford more expensive weapons, usually had dueling pistols, while rank-and-file soldiers made due with whatever they could get from local gunsmiths. This led to an array of armaments with varying calibers and qualities.

The Continental Congress tried to get a standard sidearm to the Continental Army. The pistolitchose was a direct copy of the British Model 1760 flintlock pistol. The Congress bought 2,000 of the pistols, dubbed the Model 1775, which were made by the Rappahannock Forge in Virginia.

The .62-calibre smoothbore single-shot flintlock, which included an iron or ash ramrod under the barrel, is considered the first US Army-issued handgun.

The pistol was well received during the Revolution. After the war, a new version, known as the Model 1805, was made at Harper’s Ferry. This flintlock saw service in the War of 1812 and remained the US Army’s standard-issue pistol for over 50 years.

Two Model 1805s are featured on the US Army Military Police Corps insignia, and a similar pistol can be seen on the US Navy SEAL emblem. 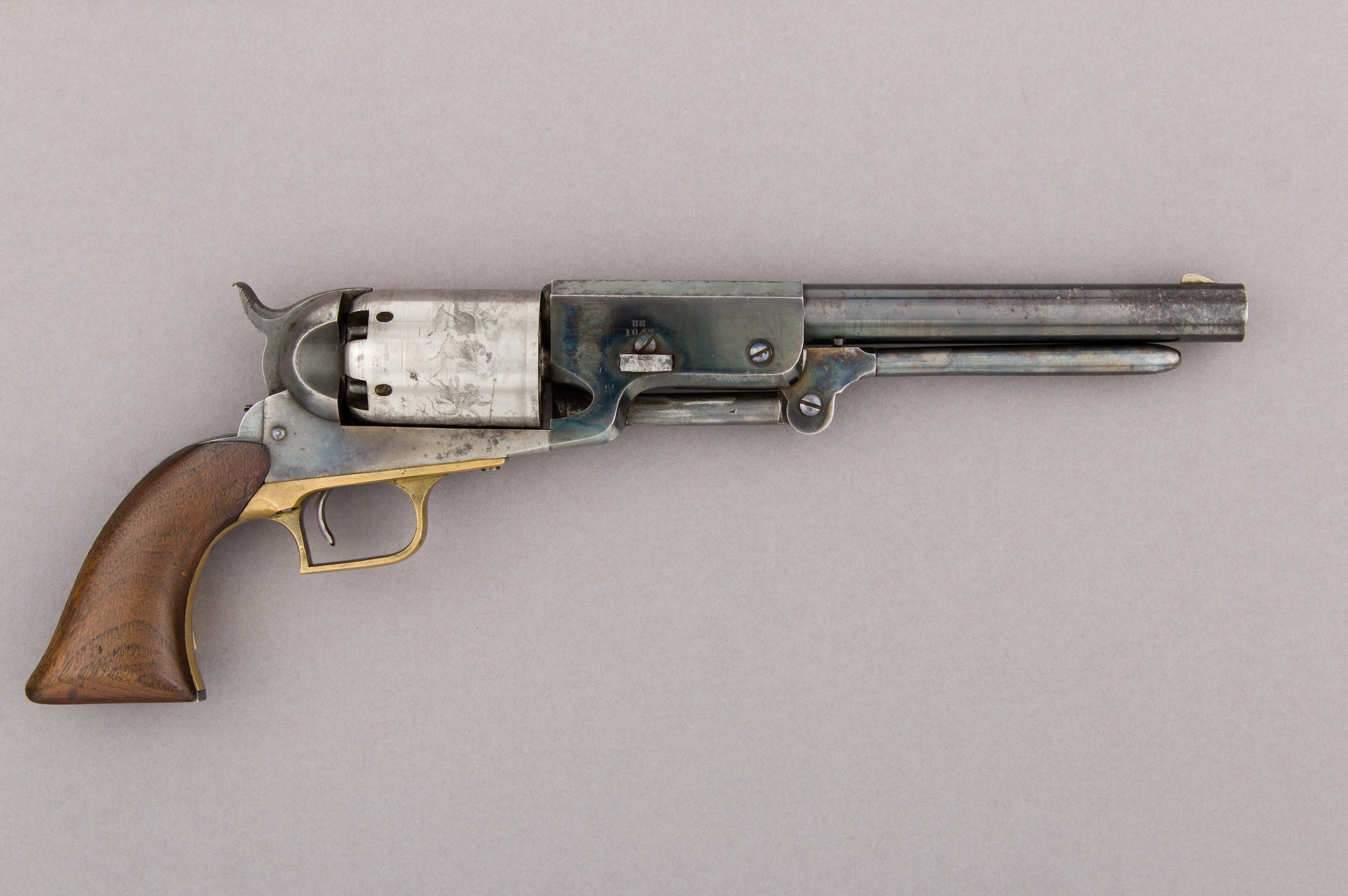 In 1836, inventor Samuel Colt revolutionised warfare when his first revolver design was patented.

The new weapon allowed a soldier to fire six bullets in as many seconds without pausing to reload. It also used percussion caps, which allowed soldiers to shoot reliably in wet weather.

Colt revolvers were important weapons in the US arsenal for much of the 19th century, with at least four designs â€” the Colt 1847, the Colt M1848 Dragoon, the Colt Army Model 1860, and the Colt Single Action Army â€” seeing service.

The Colt 1847, known as the “Walker” for the Texas Ranger who helped design it, was based on previous Colt designs in service with the Republic of Texas and became the first mass-produced revolver in US service.

The Walker and the Dragoon, another .44-calibre revolver adopted by US Army cavalry and mounted-infantry units, saw service in the Mexican-American War and on both sides of the US Civil War. 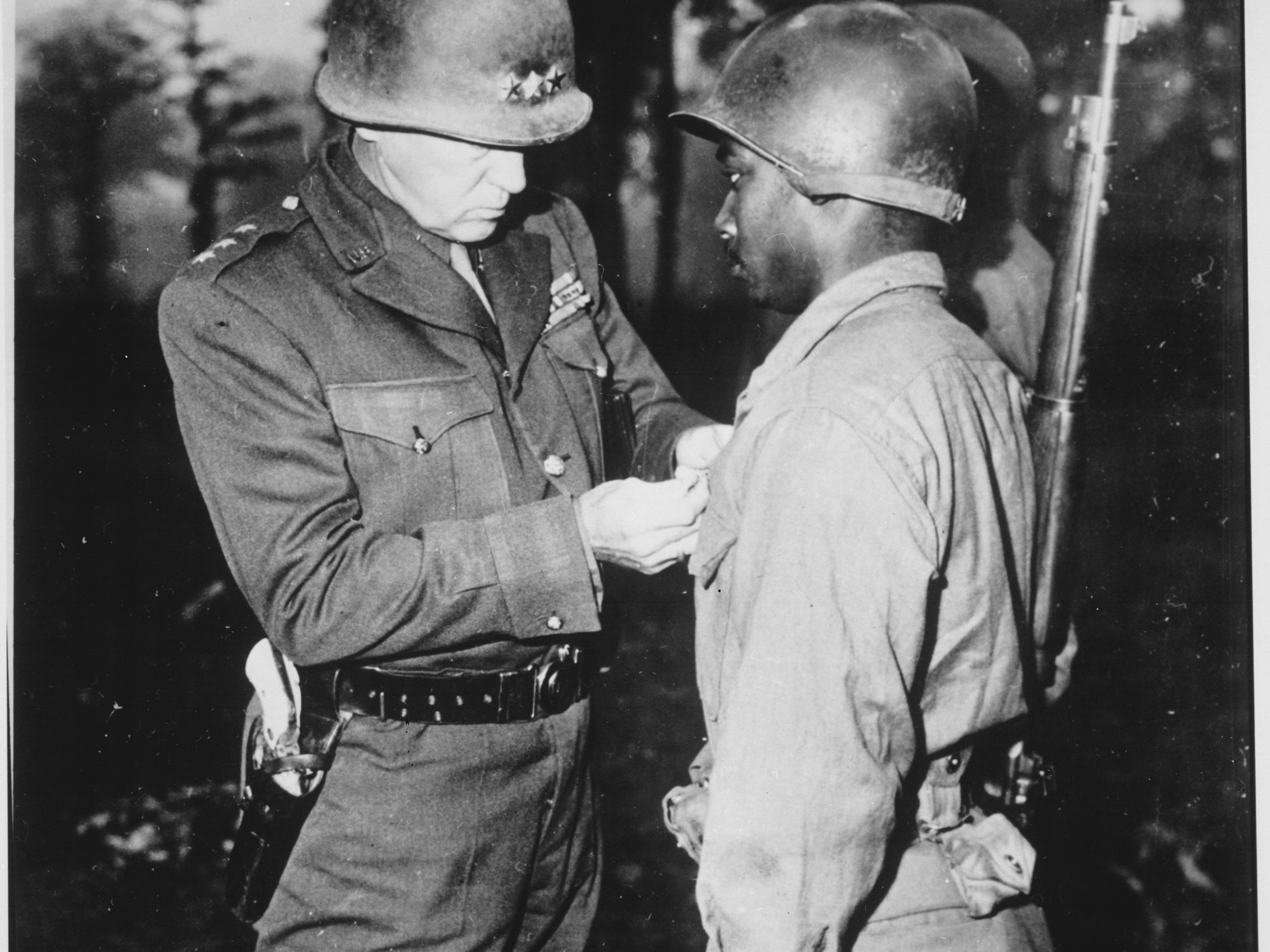 The most popular Colt design of the 19th century was the Colt Army Model 1860, a .44-calibre revolver adopted just before the Civil War. It was used in large numbers by the Union and the Confederacy â€” 130,000 were built for the Union alone, and over 200,000 had been made by the time production ceased in 1873.

The invention of metallic cartridges again revolutionised firearms, eliminating the need for percussion caps, a separate powder container, and ramrods. Colt’s most well-known model featuring this innovation was the Colt Single Action Army.

The new revolver fired a .45-calibre centre-fire cartridge and was a huge success, becoming a standard sidearm for the US for more than 20 years. It saw action in every US war and military campaign until 1905 and was used extensively on the US Western frontier by bandits and government personnel alike, earning it nicknames like “the Peacemaker.”

Some soldiers, such as Gen. George S. Patton, carried their personal Colt SAAs with them as late as World War II.

The last revolver in US service was the M1917, a six-shot pistol made by Colt and Smith & Wesson and introduced for interim use. After World War I, M1917s were used mostly by support units, though they again saw frontline service with the Vietnam War’s tunnel rats. 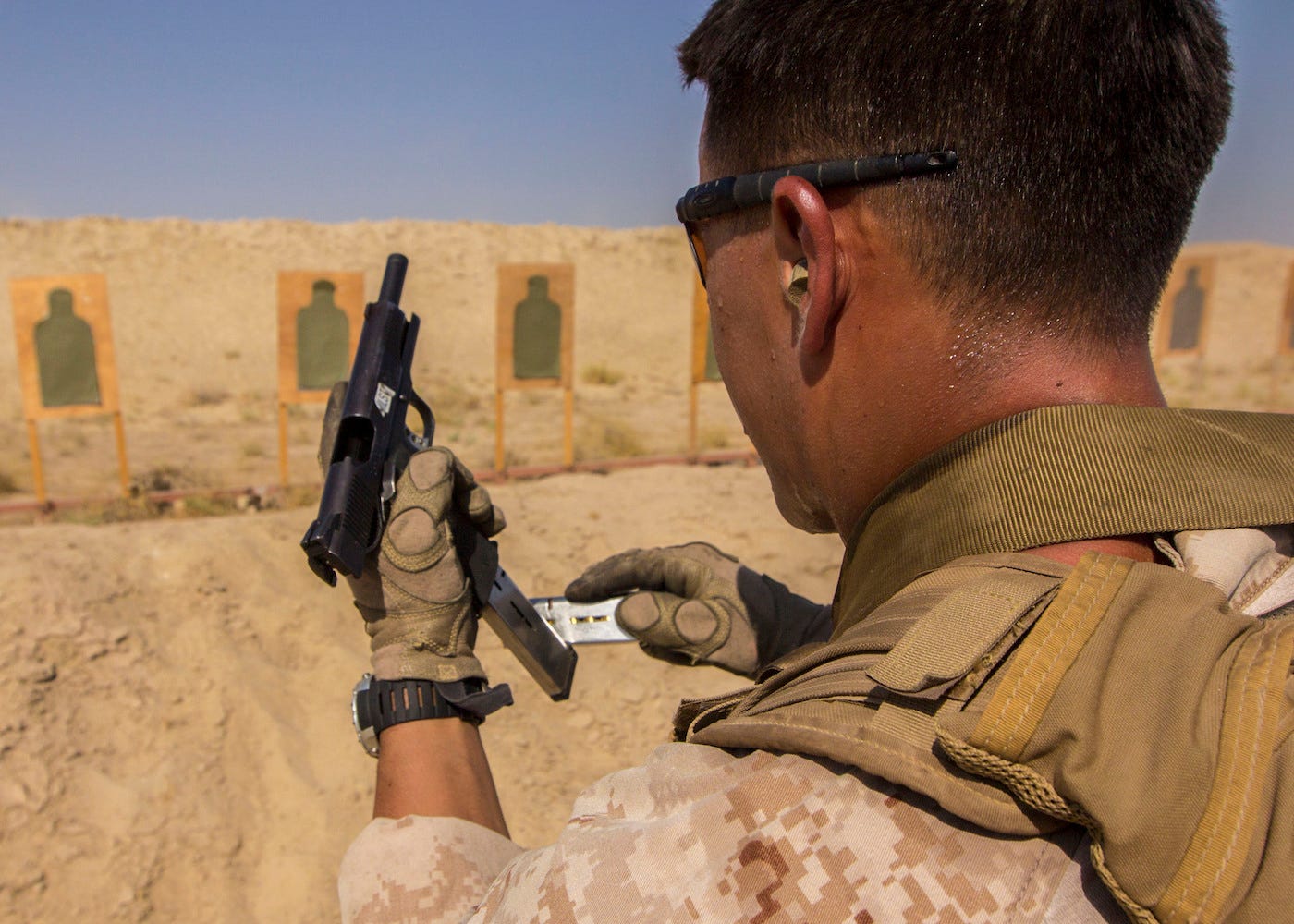 In 1911, the US military adopted what would become one of the most iconic firearms in history â€” the M1911.

Designed by firearms legend John Browning, the .45 ACP pistol was a semiautomatic, single-action, recoil-operated pistol capable of firing seven rounds from a magazine held in the grip of the gun.

The M1911 was one of the most popular weapons in American history. It was the standard-issue sidearm, with few changes, for all branches of the US military for more than 70 years and saw action in almost every American conflict during that period, including both World Wars, Korea, Vietnam, and the US Invasion of Grenada in 1983.

The M1911 was officially replaced in 1985, but a number of special-operations units carried them into 21st century. It was so popular that the Marine Corps brought it back into limited service in 2012 in the form of the M45A1 CQBP. 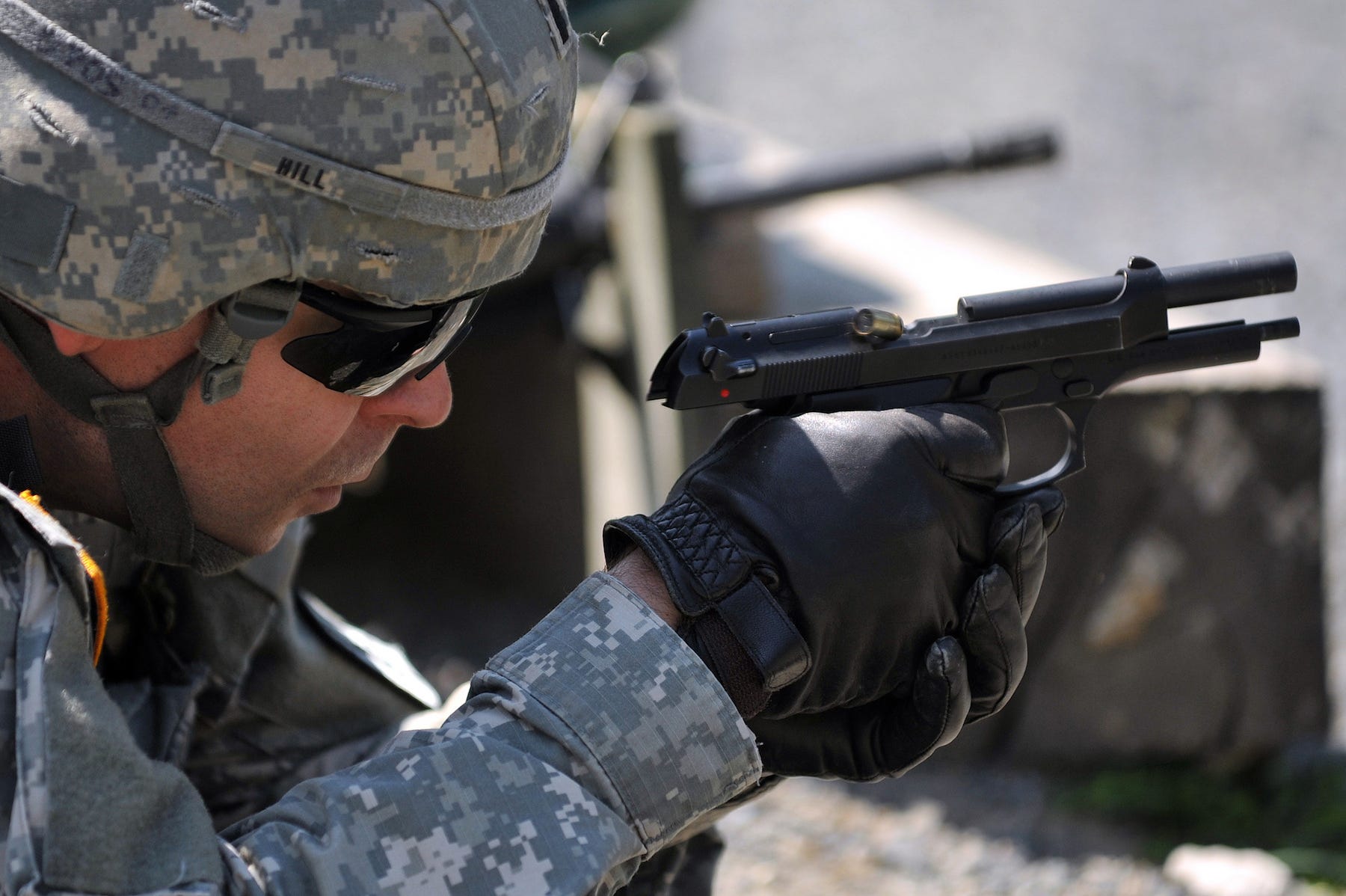 In 1986, the military selected the Italian Beretta 92 as the new sidearm for all branches.

Lightweight and modern, the pistol used the smaller 9 x 19 mm round, enabling it to carry 15 rounds in the magazine, double that of the M1911, but at the cost of less penetration power.

In service as the M9, the pistol was used by US troops for 30 years and saw action in Yugoslavia, the Gulf Wars, Afghanistan, and other operations during the War on Terror.

The Pentagon bought more than 600,000 M9s, but they had reliability problems and had gained a bad reputation by the 2010s. In 2015, the US Army and Air Force began searching for a replacement. 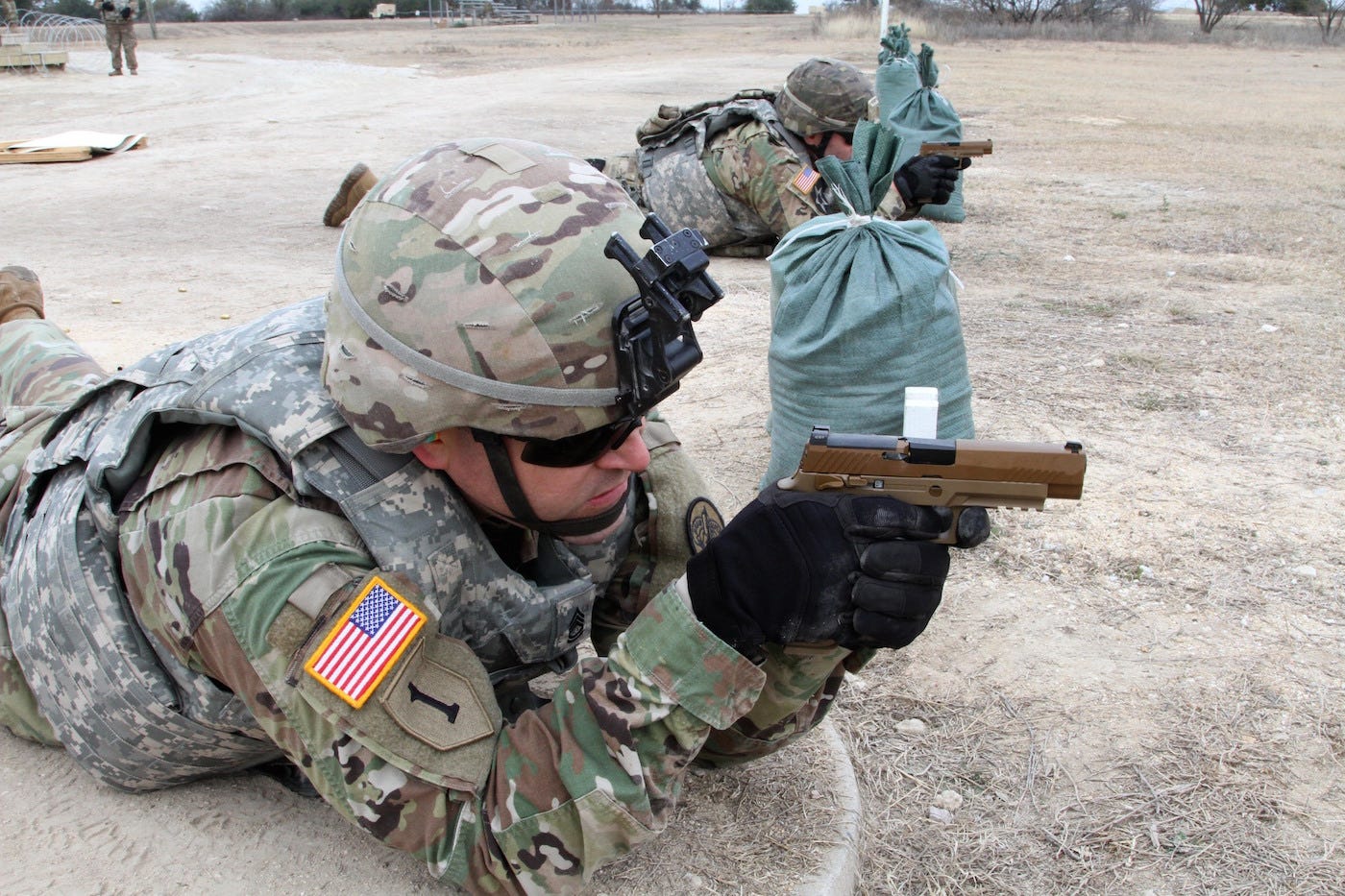 In January 2017, Sig Sauer’s P320 was announced as the winner of the XM17 Modular Handgun System competition. The pistol has two variants: the full-length M17 and the compact M18.

The Army received its first M17s in June 2017. The Air Force began its procurement in June 2019, and the Marine Corps started officially fielding the M18 in September.

The pistols can be configured for different missions and have a rail on which accessories like lasers and optical sights can be mounted. Their standard capacity of 17 9-mm rounds can be increased to 21 with an extended magazine.