The rise and fall — and rise again — of Abercrombie & Fitch Abercrombie & Fitch Co. has seen many evolutions over its history, starting as an outdoors and hunting store before transforming into the cultural clothing mecca for teens in the 1990s and early 2000s. Changing public interest as well as controversy and lawsuits in the 2000s and 2010s turned customers away from the once popular clothing line. But it has attempted a comeback in recent years with a more mature and conscientious re-imaging, and in turn, it has seen sales increase again.

Here’s how the company rose to fame, almost lost it all, and is now poised for a comeback.

Abercrombie Co. was founded in 1892 as an outdoor retailer that sold fishing and hunting gear. 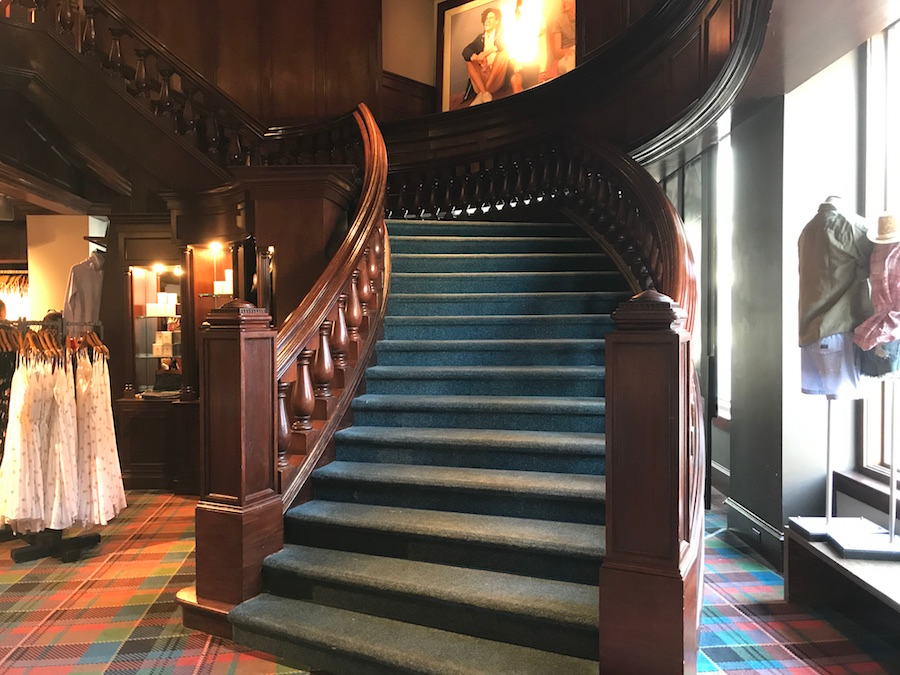 Founded by David T. Abercrombie, the store sold outdoors equipment in New York City. Ezra Fitch, a lawyer, purchased a large share of the company and was named co-founder in 1904, and the company became Abercrombie & Fitch.

By 1910, David Abercrombie had left, and the company had opened a large department store. 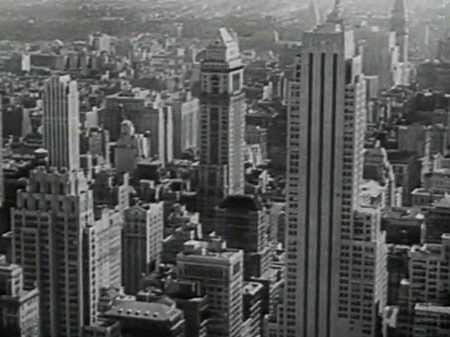 The 12-story department store on Madison Avenue sold both men’s and women’s clothing, in addition to having a shooting range and golf school. Abercrombie & Fitch also started a mail-order catalogue, mailing out 50,000 copies to consumers.

According to Funding Universe, the company made record $US6.3 million in sales in 1929.

After surviving the Great Depression, the company continued to grow, expanded to new states, and served some famous clients. The company had some famous patrons like Ernest Hemingway and Theodore Roosevelt and outfitted Charles Lindbergh’s transAtlantic flight in 1927. In 1960, while net sales rose, net profits reportedly fell for a fourth straight year, according to Funding Universe. In 1976, the company reported a loss of $US1 million. During this time, the company failed to take advantage of new mediums like television.

According to its website, Abercrombie & Fitch was acquired in 1978 by Oshman’s Sporting Goods. In 1988, it was acquired by Limited Brands, which refocused the company on apparel.

They also moved the headquarters from New York to Ohio.

In the 1990s, Mike Jeffries became CEO and focused on connecting with the day’s youth. 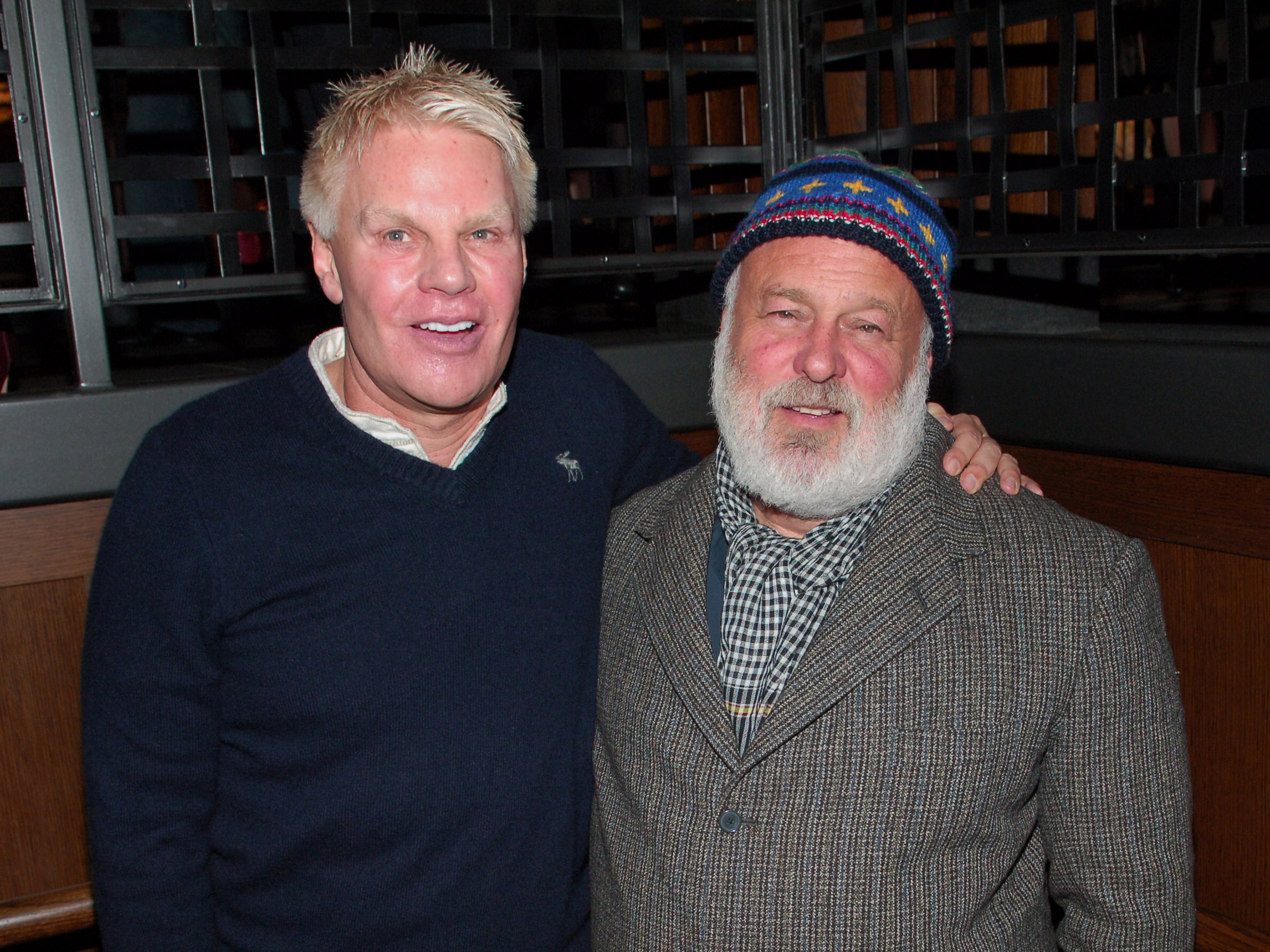 After working for women’s clothing line Paul Harris, Jeffries (pictured left) took over as CEO of the company from Sally Frame-Kasaks in 1992. He turned his attention to cornering the teen retail market, making it the A&F brand’s mission statement. 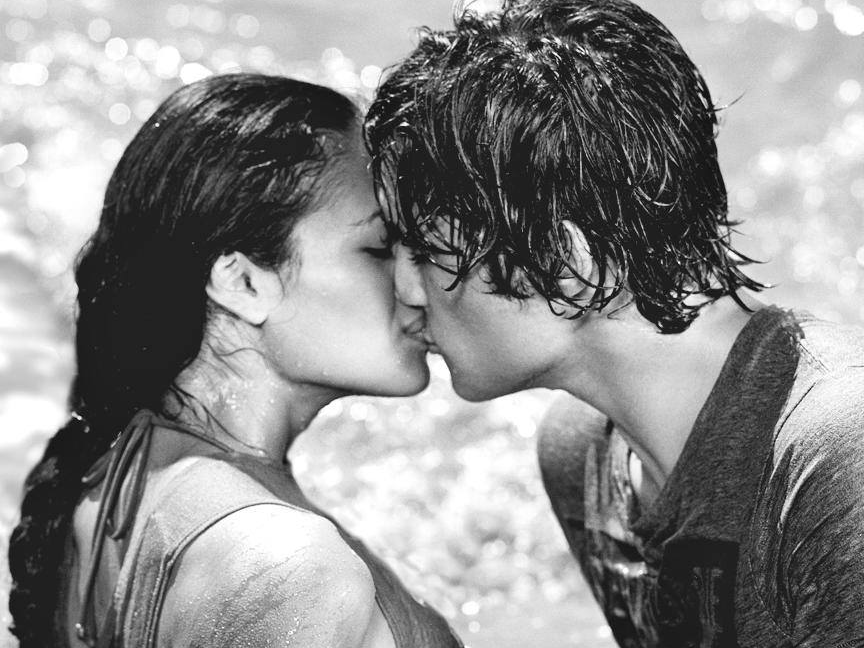 Photographer Bruce Weber was hired to take the racy photos in a bid to rebrand A&F into a conversation piece.

Under Jeffries, by 1999, the company was more popular than ever. 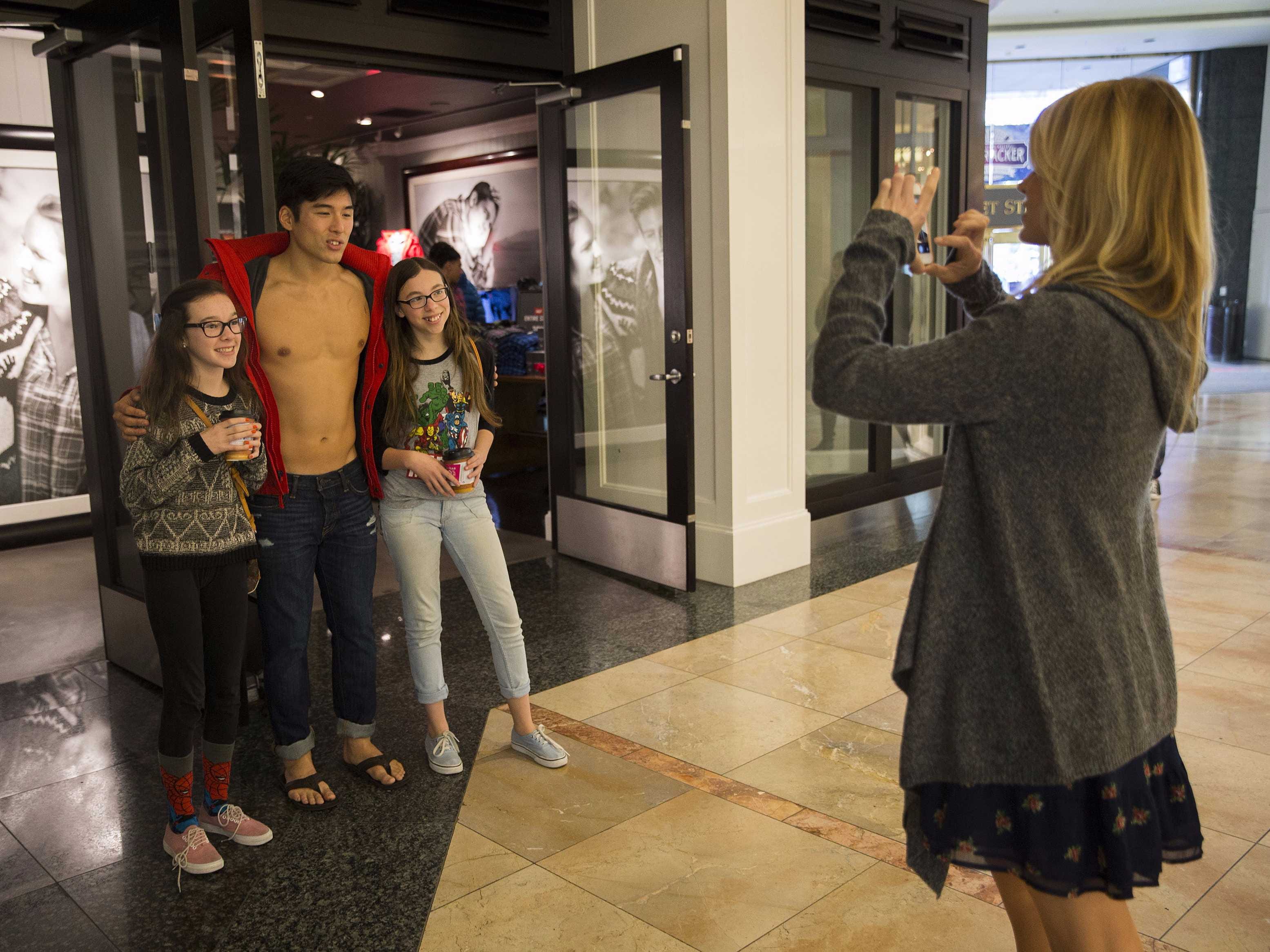 In 1998, the A&F brand launched a clothing line for ages 7 through 14, and in 2000 the company opened its subsidiary, Hollister, according to their corporate website.

The brand’s recognition with teens skyrocketed. By the 2012 fiscal year, the company had expanded to more than 1,000 locations with annual sales upwards of $US4.5 billion, according to Business Insider.

In the early 2000s, the retailer was sued for discrimination and received backlash for an offensive product line. 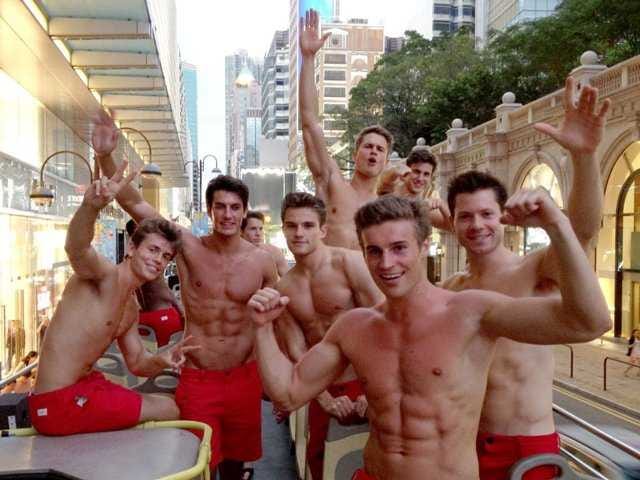 According to the San Francisco Chronicle, in 2002, the brand received public backlash from Asian Americans for images on T-shirts that depicted Asian stereotypes. According to Bloomberg, in response, the company removed the products from their shelves.

A year later, a class-action suit was filed against the company for alleged discrimination against African Americans, Asian Americans, and other minority applicants. It was reported that A&F managers were ordered to deny that a store was hiring if applicants didn’t fit a certain look.

The company settled the lawsuit in 2004 without admitting any wrongdoing, according to Bloomberg. It paid out $US40 million and changed its hiring guidelines.

In 2012, the company was sued again. In the lawsuit, a pilot claimed Jeffries had some odd requests for staff aboard his private jet. 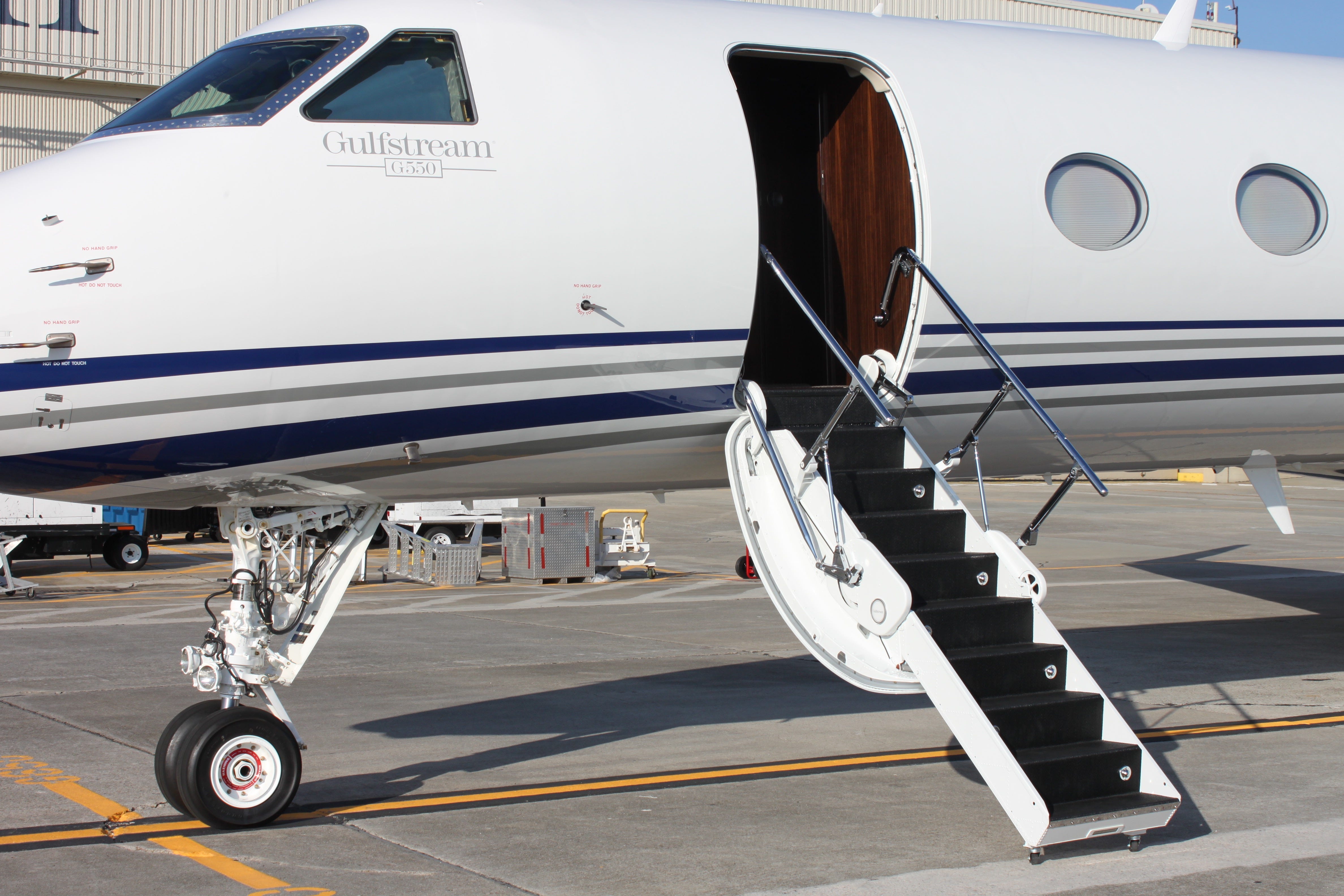 In a separate case, a former pilot, Michael Bustin, sued for age discrimination against the company, as reported by Business Insider‘s Ashley Lutz. He claimed Jeffries ordered the flight crew and models to comply with “Aircraft Standards” when flying on his private jet. These included requiring male models to wear Abercrombie polo shirts, sandals, and underwear. They also had to wear black gloves when handling silverware and white gloves when setting the table.

According to Bloomberg, in 2012, the company settled the case with the pilot, without admitting wrongdoing.

The brand was also criticised for initially excluding plus-sized clothing. 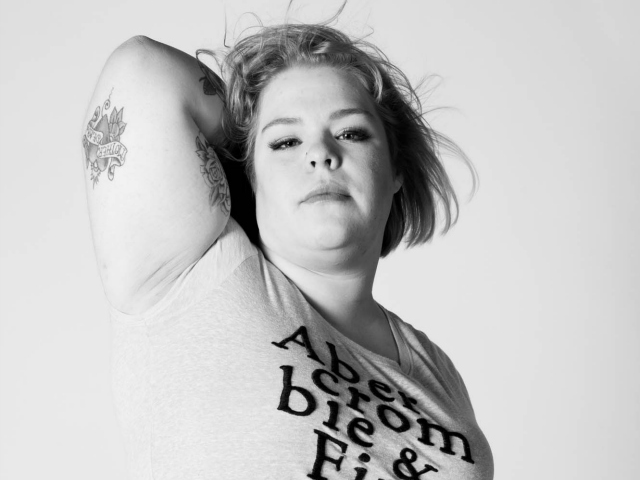 Jeffries offered a semi-apology in a 2013 Facebook post, writing, “While I believe this 7 year old, resurrected quote has been taken out of context, I sincerely regret that my choice of words was interpreted in a manner that has caused offence.”

Its sales began to fall in the late 2000s as public interest waned. 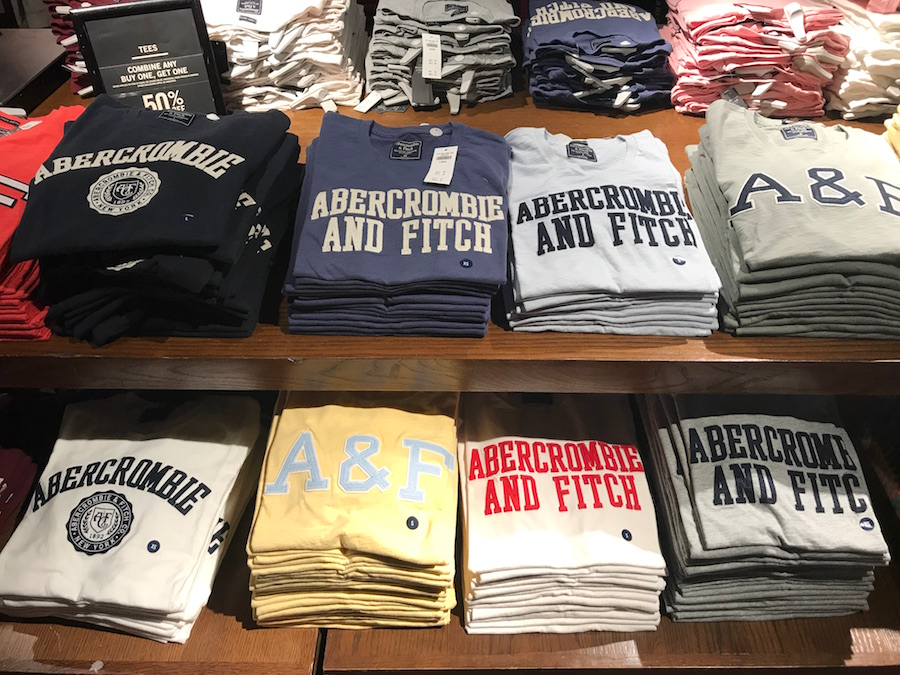 As reported by Business Insider‘s Hayley Peterson, comparable store sales were in decline for 11 financial quarters.

The slow sales were due in part to the company’s controversies, but also due to changing interests among the younger demographic. Teens opted for cheaper brands like Forever 21, and Nike took over as the youth’s go-to brand. According to Business Insider, the number of teens visiting malls had dropped by 30% in 2014 compared to the early 2000s.

In 2014, Jeffries retired from his role as CEO. “It has been an honour to lead this extraordinarily talented group of people,” Jeffries said in a statement.“I believe now is the right time for new leadership to take the company forward in the next phase of its development.”

A committee formed by three senior executives and the Abercrombie & Fitch Co. board chairman Arthur Martinez managed the company until a successor could be selected.

After Jeffries left, the company’s sales fell 14% in the first part of 2015, but Martinez was hopeful changes they had made would see improved sales, according to Business Insider.

As sales continued to fall, Abercrombie & Fitch struggled to rebrand. The company decided to phase out large logos, replacing them with smaller, more subtle logos. Leftover apparel with large logos was sold on clearance.

In 2015, A&F got rid of its shirtless male greeters and overhauled its appearance policies for sales clerks. 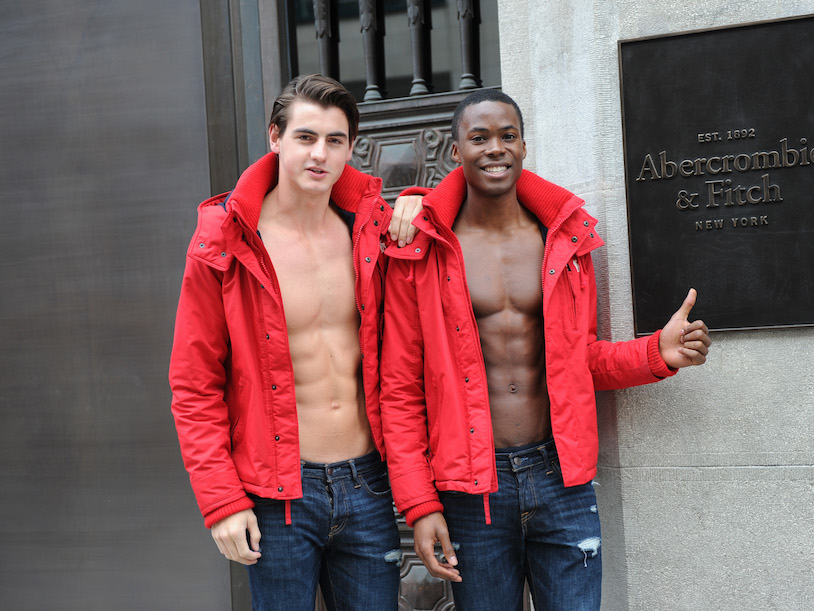 The shirtless male greeters had been a staple of the store under Jeffries. Also gone were the dimly lit stores with loud music, replaced with brighter establishments that felt like boutiques. There would still be some rules regarding what clerks could and couldn’t wear, such as “no extreme make up or jewellery.”

In 2015, the brand launched a new line that turned its focus to older consumers. 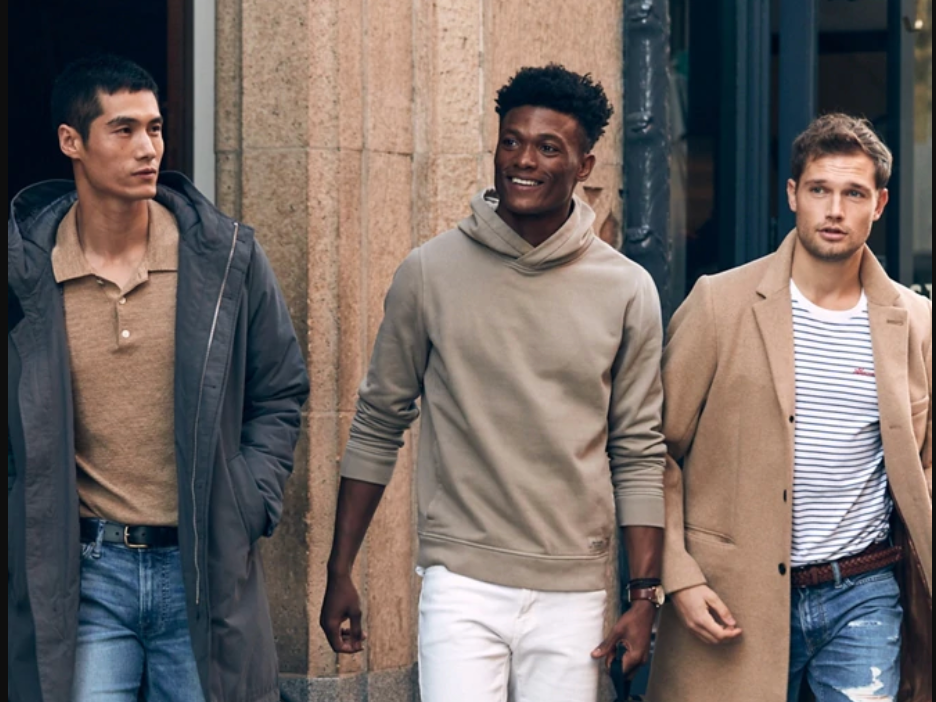 According to Business Insider, the line offered a more mature, less preppy look than it had in the past. They were targeting consumers between 18 to 25 rather than young teens as they had in the past.

The ad campaigns were also much tamer than they had been in the past.

In the 2010s, the company brought on new talent to help with a rebrand. In 2017, Fran Horowitz (pictured above) took over as CEO of the company. Horowitz had joined the company in 2014 from Ann Taylor Loft. She worked as brand president of Hollister and also held the role of president and chief merchandising officer for Abercrombie & Fitch Co.

With a new focus and some downsizing, sales began to improve. 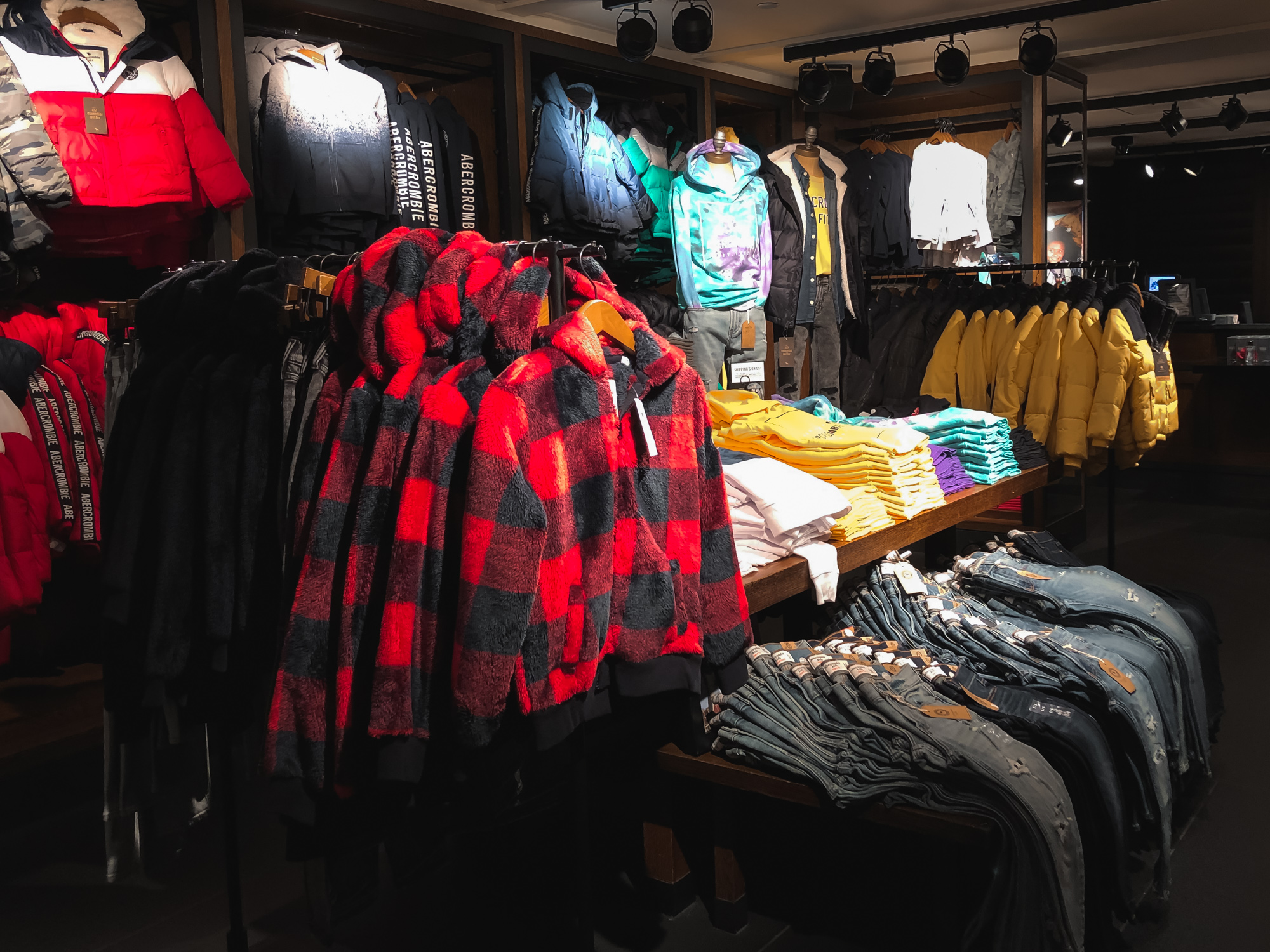 The company closed unprofitable locations while investing in stores that worked. A&F also focused design and marketing for its new demographic. Between 2010 and the 2018 fiscal year, the company closed 450 stores and remodeled others in an effort to reconnect with consumers. The company reported its fifth consecutive quarter of positive comparable sales, with growth across its brands.

In 2018, with improved sales, the brand was ready for a comeback. 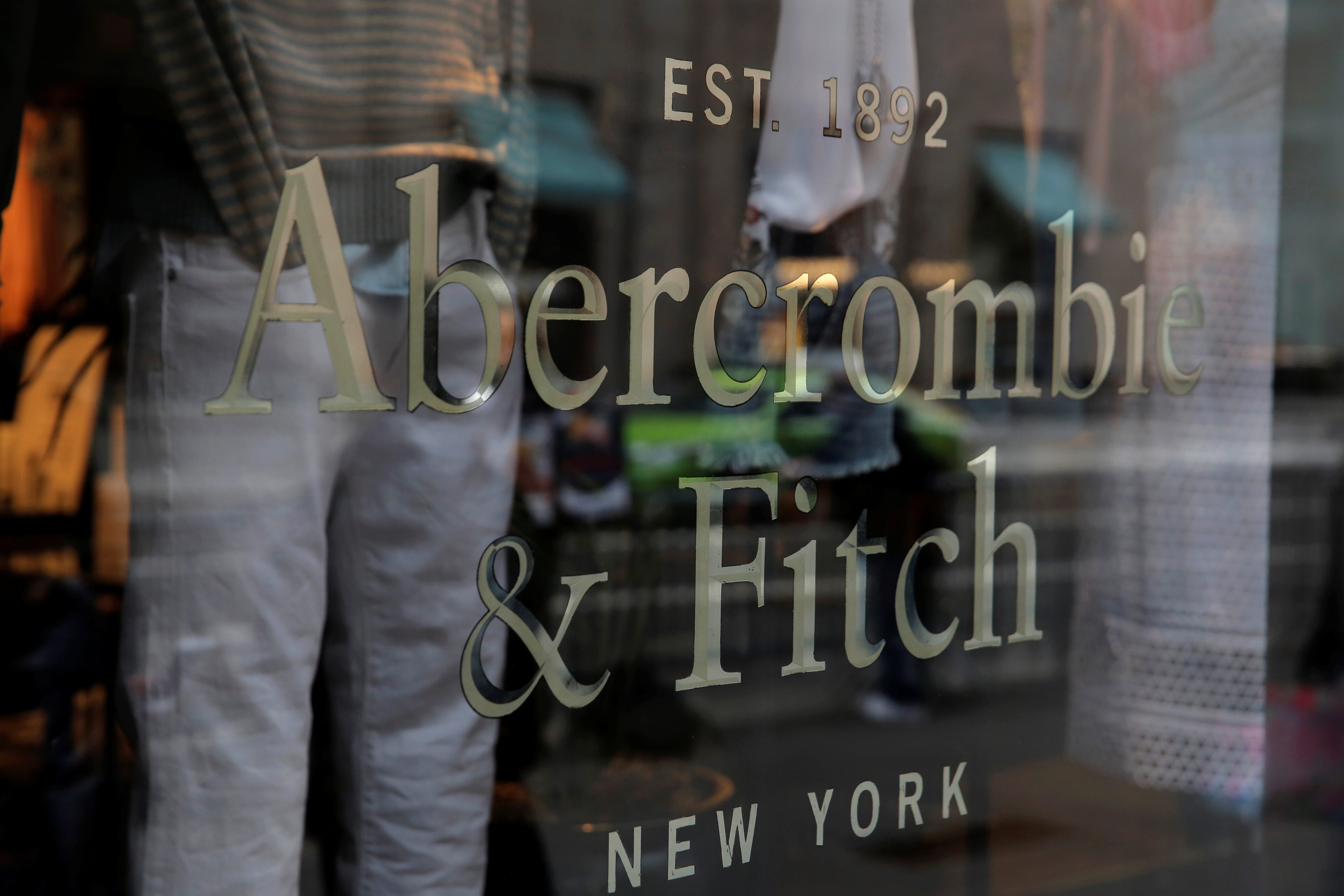 Business Insider named the brand the biggest retail comeback of 2018, looking at both the company’s sales and rebrand. Customers also had a more positive overall impression of the brand, according to data from YouGov.

Also in 2018, the company was ranked first for gender diversity out of the 55 Fortune 1000 companies in Ohio by the National Diversity Council, with the highest percentage of women in corporate governance roles.

In 2019, the A&F brand was ranked third on Gartner’s Top 10 Specialty Retail Brands in Digital.

In 2019, the restructuring continued as the company closed 40 A&F stores while planning to open at 40 new locations. 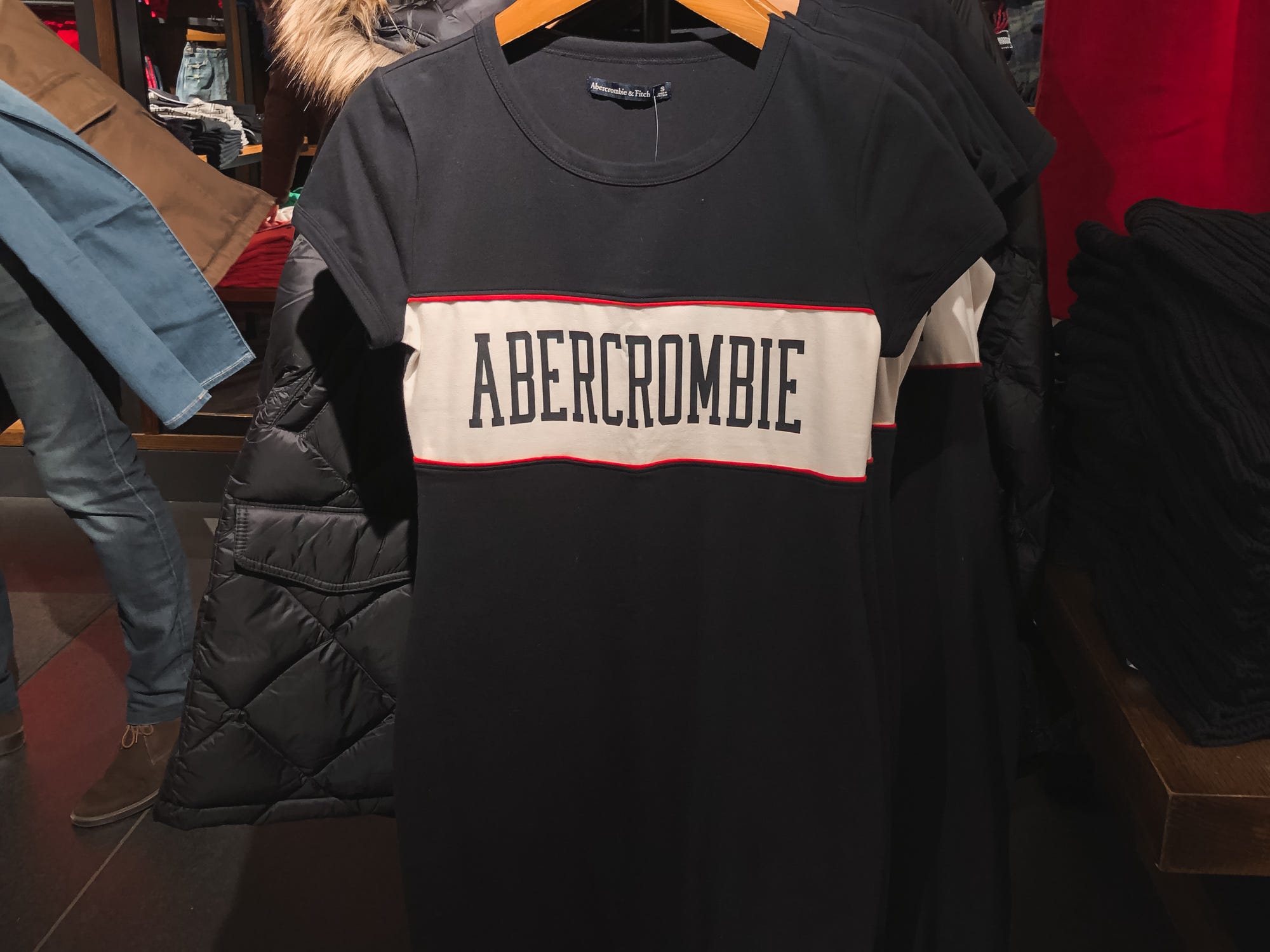 The company decided to close 40 stores but also planned to expand and open at 40 new locations with a focus on smaller spaces.

Stocks surged in 2020 after better-than-expected holiday sales in 2019. 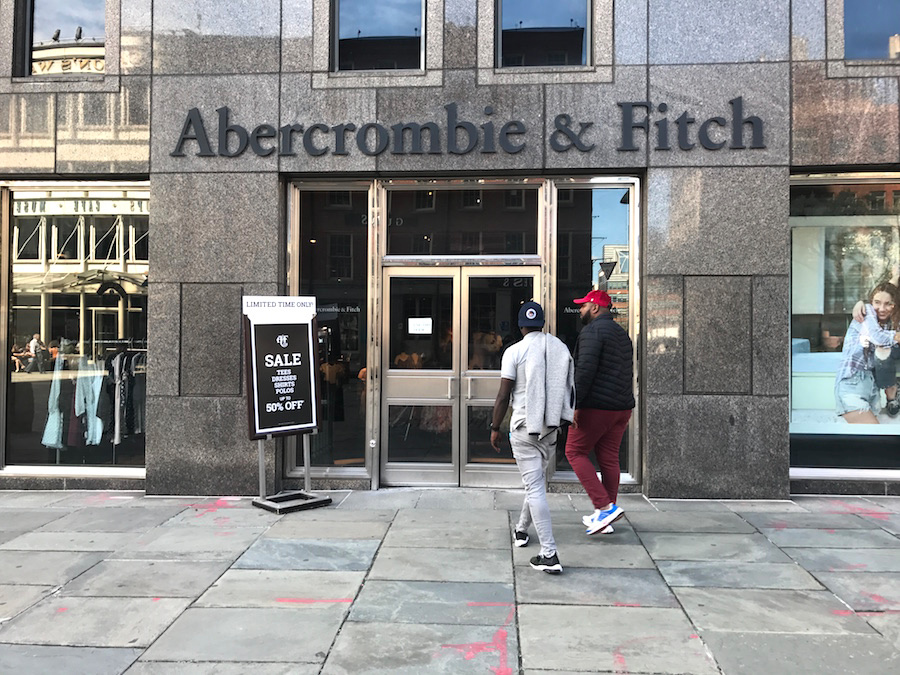 So far, the changes appear to be paying off. In 2018 and 2019, the company received over $US1 billion in digital sales.

For Black Friday week in 2019, the company reported record numbers. According to the company, Hollister set a new sales record and the A&F brand had its strongest revenue numbers in over five years.

At this point, the company has stores in 850 locations across all brands.

But the spread of coronavirus plunged the retail sector into uncertainty in 2020, and like many other retailers, Abercrombie & Fitch temporarily closed its stores. 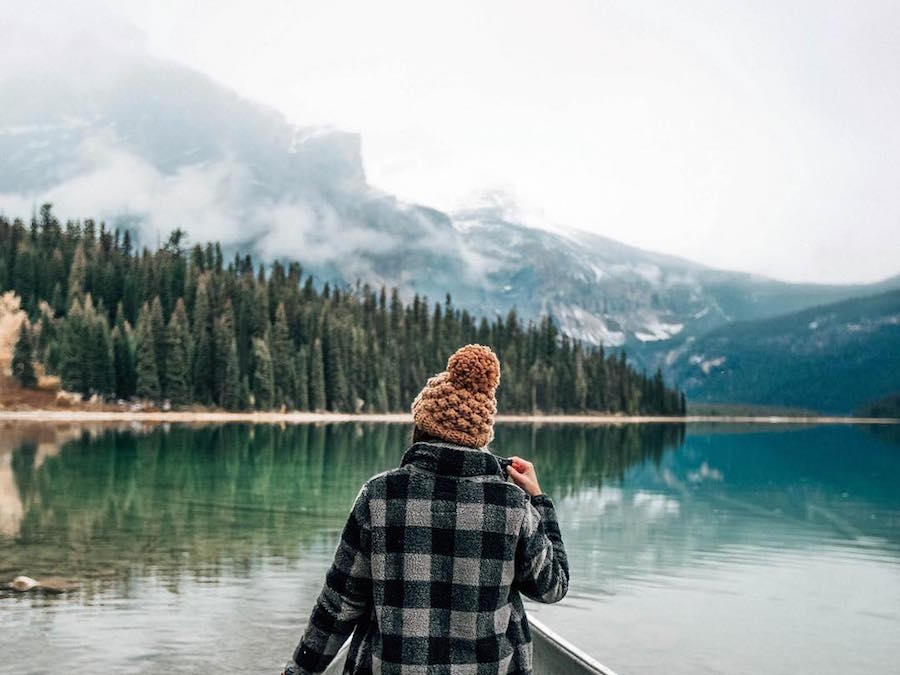 Like many retailers, Abercrombie chose to close the doors to locations across the country in a bid to help stop the spread of the virus.

“The decision to close all our stores outside of the [Asia-Pacific] region has been done with a focus on the wellbeing of our associates, our customers, our partners, and our communities, and it is in keeping with our commitment to being a responsible corporate citizen,” Horowitz said in a press release.

How this will affect their comeback, or the future of the retail industry, remains to be seen.