16 historically inaccurate mistakes fans have spotted in movies and shows The films and television shows we know and love pass by dozens of pairs of eyes before they reach our devices and screens â€” but anachronistic mistakes can still happen and sometimes objects that don’t belong make the final cut.

From rogue coffee cups making an appearance on “Game of Thrones” to video games that wouldn’t yet exist being featured in “The Hurt Locker,” here are a few times modern-day items were left in period films and on fantasy TV shows:

“Bridgerton” may have left in a subtle reference to cars, which didn’t exist yet. 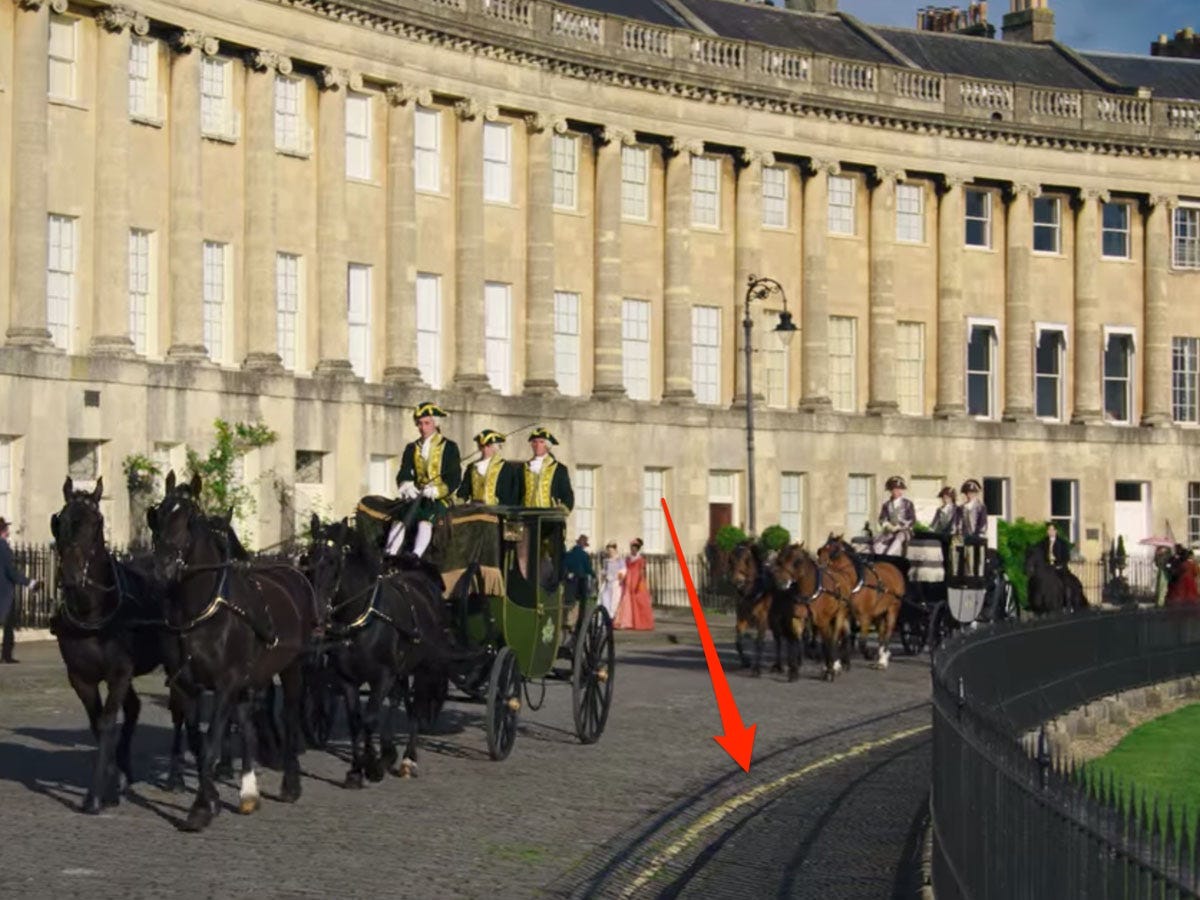 NetflixCars were not invented at the time this show was set.

Fans think the yellow line spotted during episode one of Netflix’s “Bridgerton” was an error.

The show is set in 1813 London, but cars didn’t exist yet and were not widely used in London for another few centuries.

Plus according to Travel & Leisure, these yellow traffic lines didn’t actually appear on roads until the 1950s.

You can see what looks like a modern-day water bottle during a scene in “Little Women” (2019).

Sony PicturesThere were likely no fancy insulated water bottles in the 1800s.

As some fans pointed out on Twitter, during one scene of Greta Gerwig’s “Little Women,” eagle-eyed viewers can spot a modern-looking water bottle behind Laurie (Timothée Chalamet).

Some speculate the water bottle in question is actually a Hydroflask due to the metal around the bottle’s rim, but it’s unclear if that is the case. Regardless, such a modern, insulated water bottle would not be around during the 1800s, which is when this film is set.

Who can forget the coffee cup left on one of the final episodes of “Game of Thrones”? 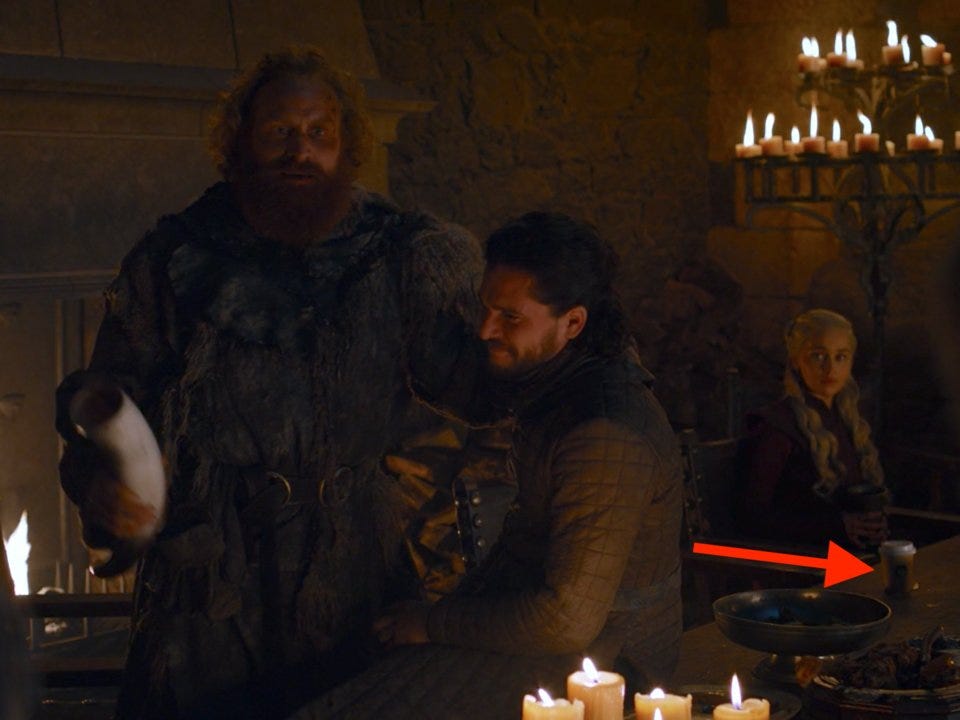 HBOChances are there weren’t any coffee shops in Westeros.

On an episode of the final season of the HBO series “Game of Thrones,” someone forgot to remove a modern-day, to-go coffee cup from the set before the director called action on a post-war dinner scene. The cup was next to Daenerys Targaryen (Emilia Clarke).

The error somehow made it past the editors and into the initial airing. It was later digitally removed, but not before it caused quite a stir online.

Although it’s a bit unclear when this fantasy series was set, they didn’t have electricity or modern-day conveniences … so it’s quite unlikely they’d have disposable cups.

In a later press release, HBO made a joke about the moment, writing, “The latte that appeared in the episode was a mistake. Daenerys had ordered an herbal tea.”

And, in an email to Variety, “GOT” art director Hauke Richter said this sort of incident isn’t that uncommon. “Things can get forgotten on set,” he wrote. “[The coffee cup error has been] so blown out of proportion [because] it has not happened with ‘Thrones’ so far.”

“Game of Thrones” had another gaffe in its series finale, when two plastic water bottles were spotted. 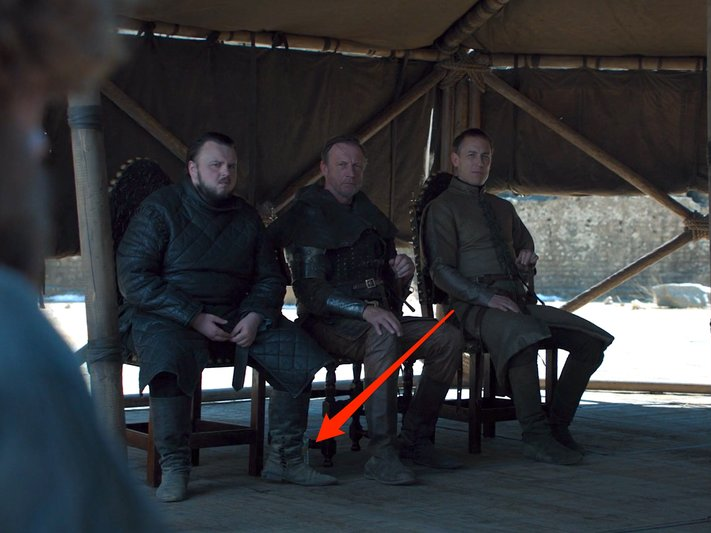 On the long-awaited season finale of “GOT,” eagle-eyed fans spotted two small anachronistic instances in the form of plastic water bottles.

During the council scene, you can see water bottles at the feet of both Samwell Tarly (John Bradley) and Ser Davos (Liam Cunningham). These types of bottles wouldn’t be popularised until the late 1900s – the show is set centuries before this. 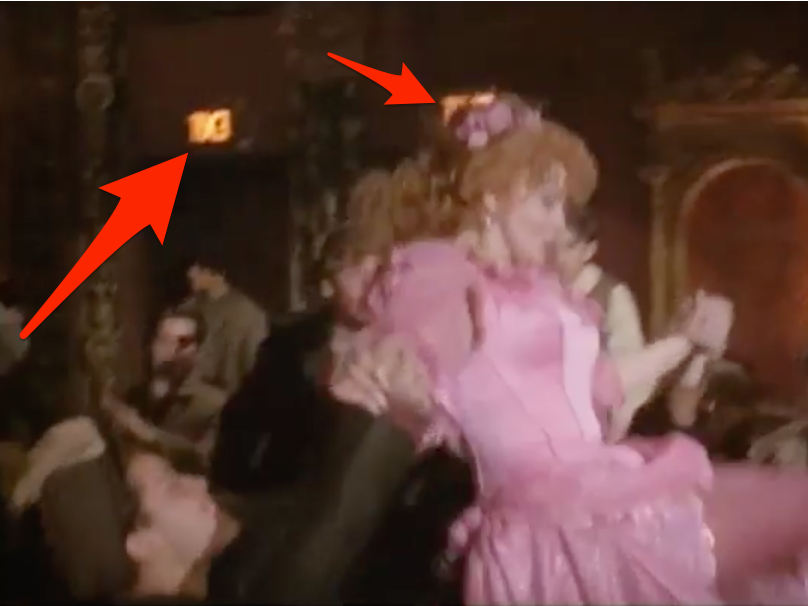 Disney’s “Newsies,” the box-office bust that was later adapted into a Broadway darling, features a few anomalies during one of its big musical numbers.

Throughout the vaudeville performance of “High Times, Hard Times” by Medda Larkson (Ann-Margret), you can see quite a few brightly lit, modern-day exit signs.

Considering the movie is inspired by the real-life Newsboys Strike of 1899 in New York City and is set during that same time, this technology and design (which was developed decades later) would not exist yet. 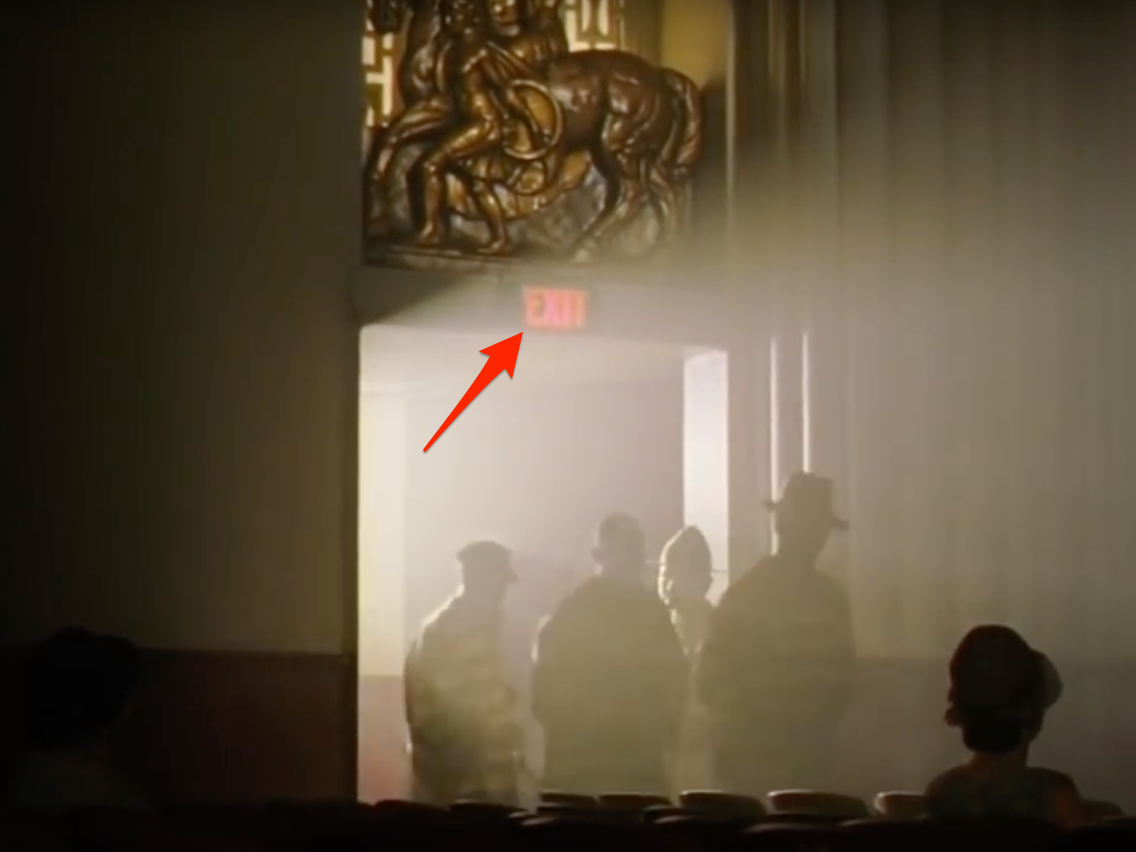 Touchstone PicturesThere wouldn’t be signs like that in the 1930s.

This movie is set in the 1930s, but at one point in the film a group of men enter a movie theatre and a red electric exit sign is illuminated above the door.

Although it wouldn’t be unlikely that this theatre would have an exit sign, it wouldn’t look anything like this modern-day one. 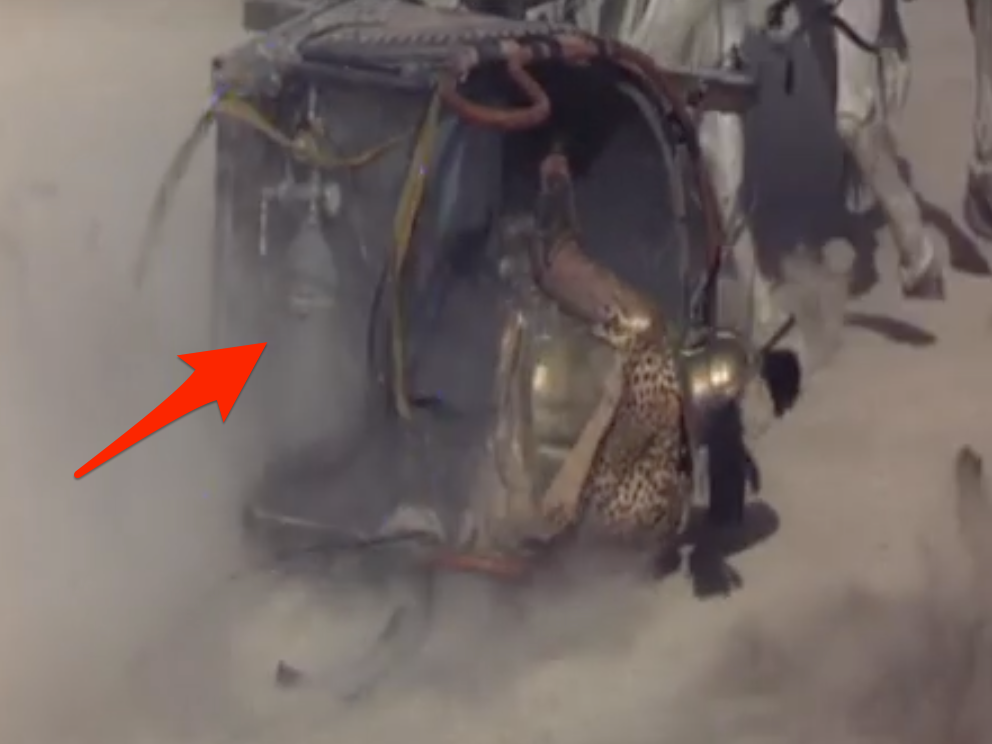 DreamWorksThat’s not how chariots worked in ancient Rome.

If you pay close attention to one of the horse-drawn chariots during the battle in the Colosseum, you’ll spot a big, metal gas cylinder.

It was most likely used to achieve a special effect, but it wouldn’t actually exist in ancient Rome, which is when this movie is set.

There’s a white car in the back of a famous battle scene in “Braveheart” (1995). 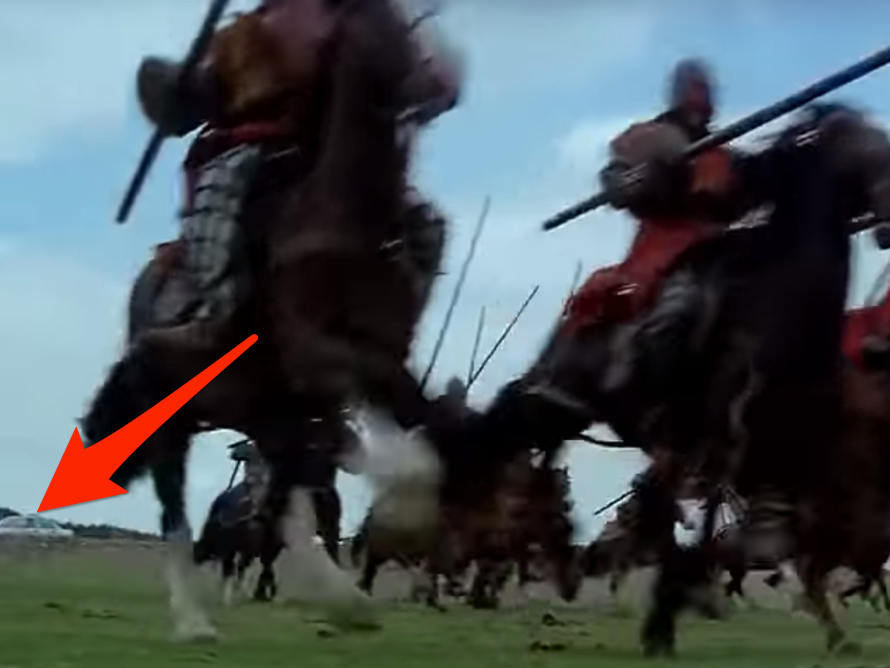 During the “Hold” battle scene, eagle-eyed viewers can spot a white car in the background.

“Braveheart” may have been shot in the mid-’90s, but it takes place in 13th-century Scotland where (and when) there were absolutely no cars. 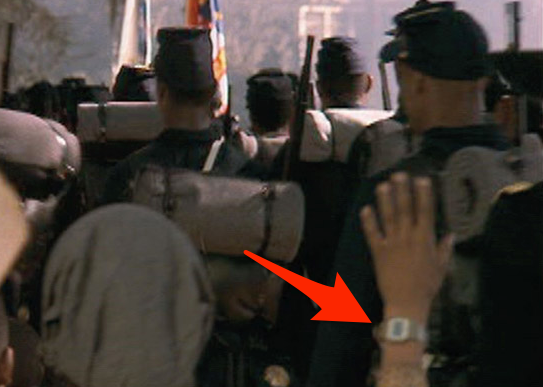 The 1990 Civil-War film that won Denzel Washington an Oscar for best supporting actor features a person wearing a digital watch.

The Civil War began in 1861 and digital watches were invented about a century later.

There’s a man who doesn’t quite belong during a scene in “Pirates of the Caribbean: The Curse of the Black Pearl” (2003). 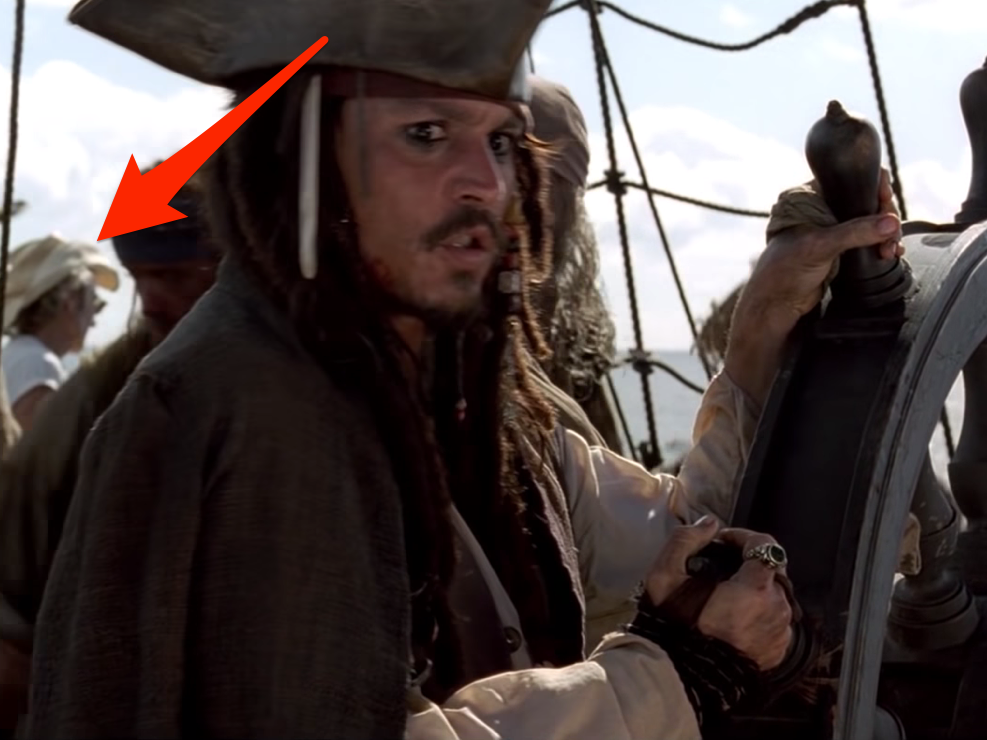 Walt Disney ProductionsHe doesn’t look like he belongs on this boat.

In one scene on a ship in the first “Pirates of the Caribbean” film, a person who appears to be a crew member can be seen standing among the pirates in a historically inaccurate white T-shirt and an out-of-place cowboy hat. 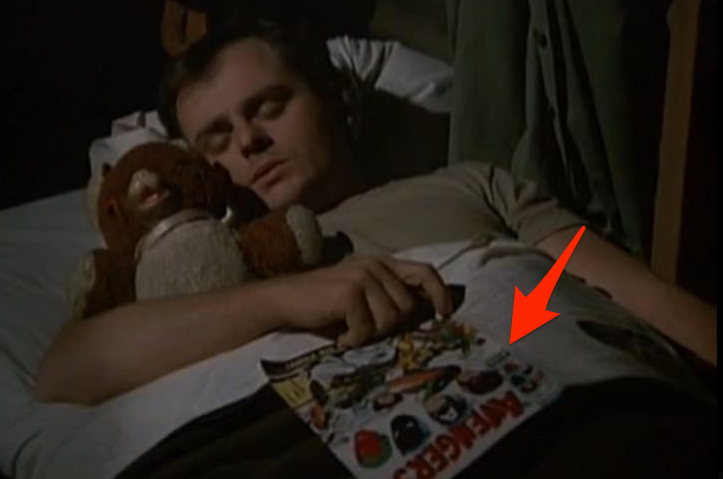 20th Century Fox TelevisionHow did he get it?

On the episode “Der Tag,” Radar O’Reilly (Gary Burghoff) fell asleep holding his stuffed bear and a comic book from the “Avengers” series.

This Marvel comic-book series wouldn’t even exist yet. Moreover, people have pointed out he’s reading “Avengers #60” which wasn’t released until 1969.

Bill Graham Films/Paramount PicturesYou can see the side of the billboard.

The movie, which follows Jim Morrison and the famous rock band The Doors throughout the 1960s and early 1970s has a small anachronistic moment in an establishing shot.

During a scene in the film that’s set in 1971, band frontman Jim Morrison (Val Kilmer) is sitting on a window ledge and, behind him, there is a billboard for the 1990 Eddie Murphy film “Another 48 Hours.” 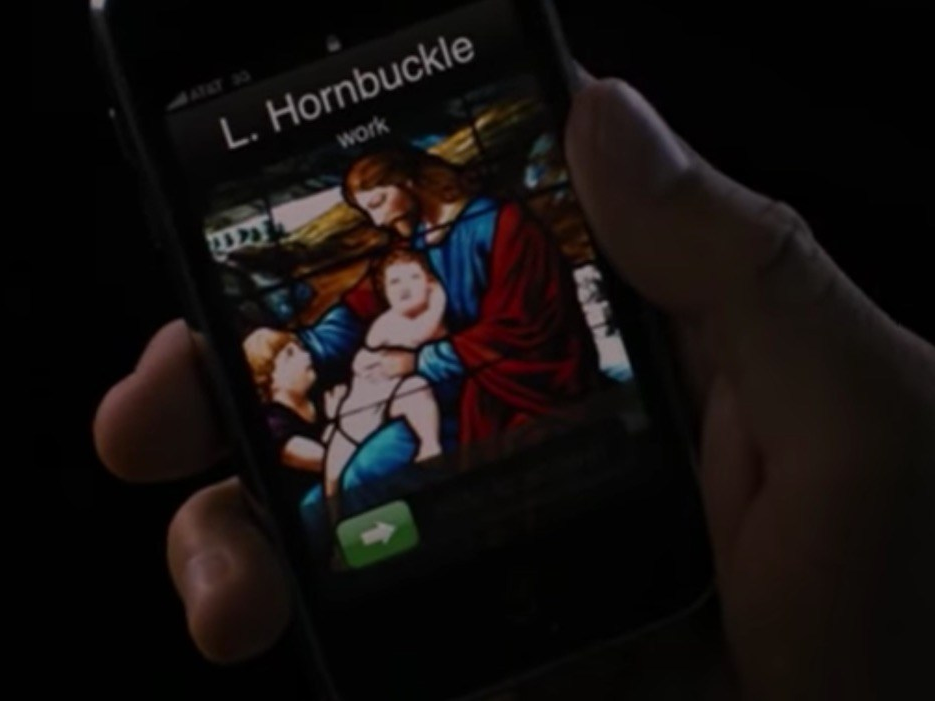 “Bernie” is based on the real-life 1996 murder of Marjorie Nugent, a wealthy widow, who was shot by her companion, Bernie Tiede.

The film, which stars Jack Black, takes place in the mid-1990s – but at one point, we get a clear look at an incoming call on an iPhone, the first iteration of which Apple released years later in 2007.

In “The Hurt Locker,” one character is playing a console and game that wouldn’t yet exist. 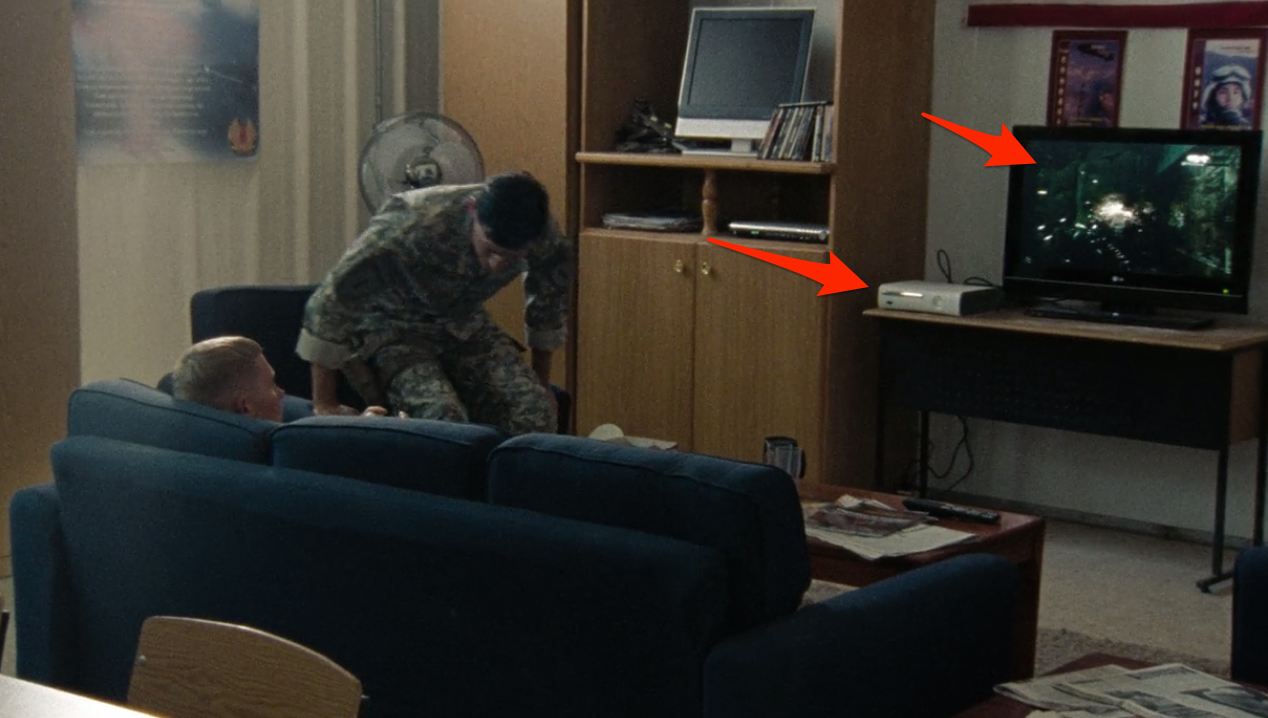 You can see a boom microphone on an episode of Disney Plus’ “The Mandalorian.”

Disney PlusThe scene is a bit dark so you have to look closely.

On the fourth episode of Disney Plus’ “TheMandalorian,” some viewers noticed a boom microphone popping up at the top of the screen.

The piece of technology in question was spotted about 16 minutes into the episode during a conversation between Omera (Julia Jones) and titular character (Pedro Pascal).

In “Harry Potter and the Order of the Phoenix,” Dudley’s shorts are from at least 2003, but the movie takes place around 1995. 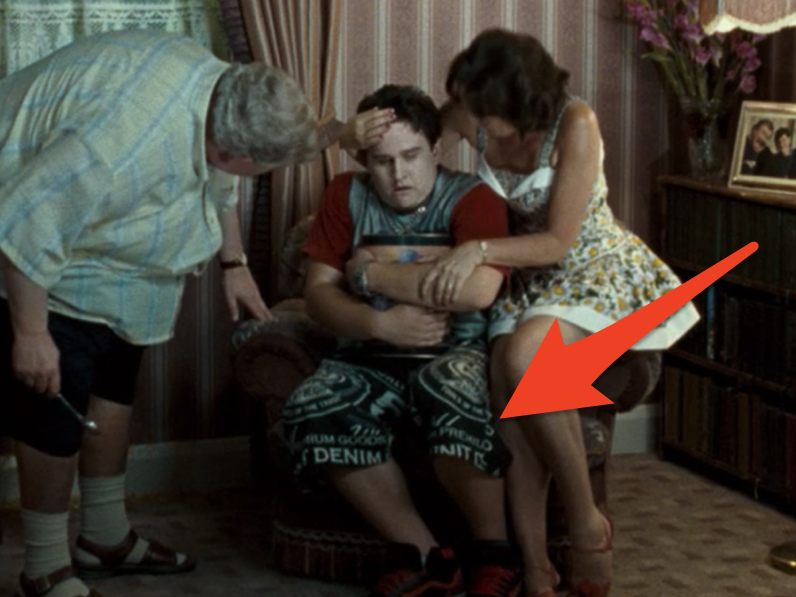 Warner Bros.Dudley Dursley wears G-Unit shorts in ‘Harry Potter and the Order of the Phoenix.’

The “Harry Potter” films take place from 1991 to 1998, and throughout them, the characters are typically dressed in fairly generic clothing that strays away from styles and trends that might date the looks.

However, in the opening scene of the fifth film, Dudley Dursley (Harry Melling) appears to be wearing shorts with the G-Unit logo on them. It can be seen along the bottom of the shorts when he sits down in the Dursley’s living room.

G-Unit was a clothing line established by rapper 50 Cent in 2003.

The “Order of the Phoenix” movie came out in 2007, so it makes sense that the costume team would have access to the brand, but it’s supposed to take place from 1995 to 1996 – before G-Unit apparel existed.