We threw a bunch of the most overused Hinge chat-up lines at the dating app's CEO. Here are his suggestions for improving them. 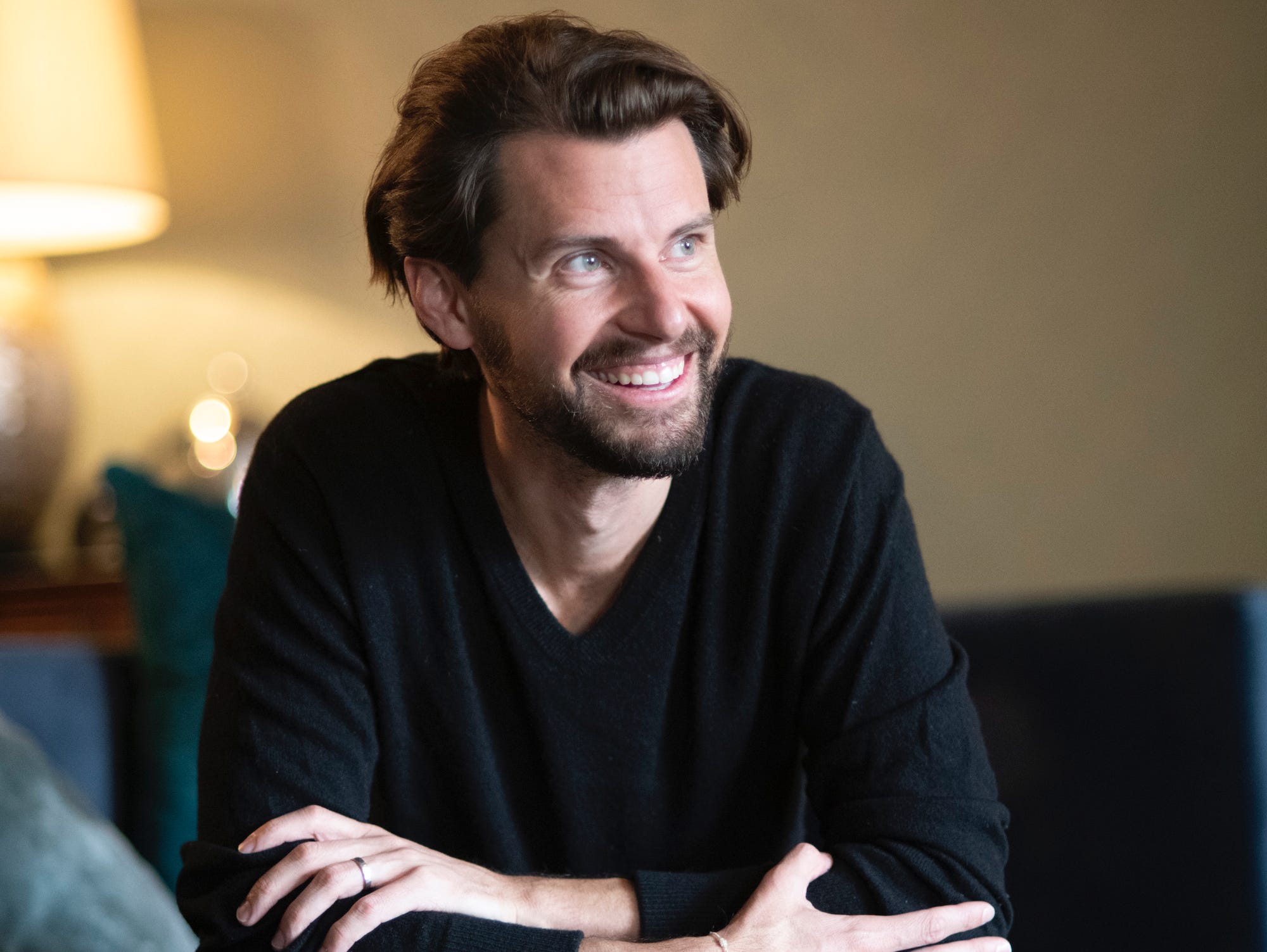 Hinge advertises itself as a dating app that enables people to get their personalities across to fellow users more than other swipe-based dating apps like Tinder.

It does so by making users set up profiles with a collection of photographs and prompts.

Hinge’s prompts are essentially a set list of ways to begin a sentence, which the user then has to finish off. Examples of some of the templates Hinge provides are: “My mantra is…”, “Give me travel tips for…” and “I’ll fall for you if…”

Rather than swiping left or right, users select specific pictures and prompts to either like or to comment on. If the original user likes them, they match and take it from there. 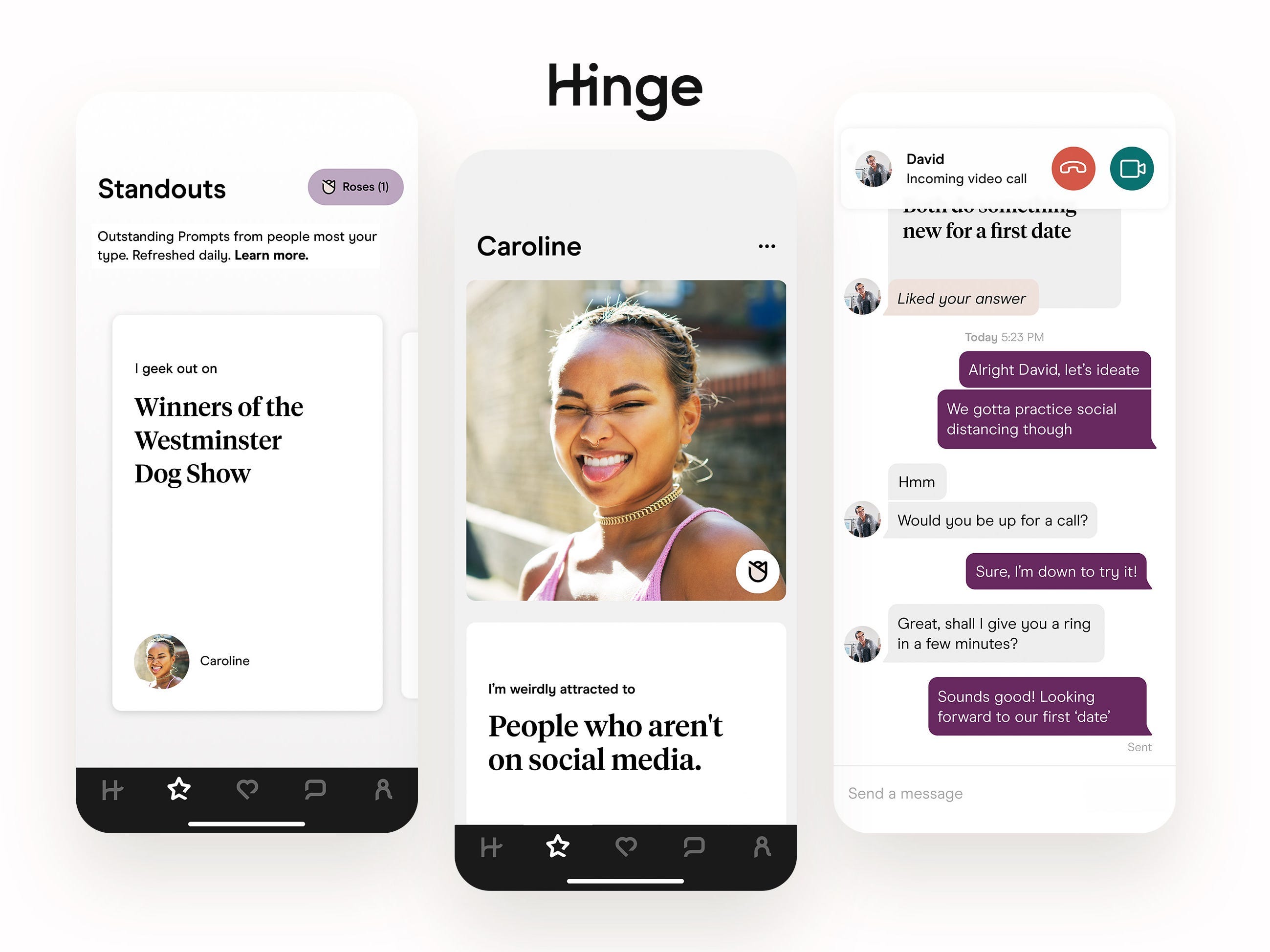 Hinge‘prompts’ are part of what makes up a user’s profile.

It’s a format lots of Hinge users like but unfortunately, humans love a trope – and certain prompts, lines, and themes have a reputation on Hinge as being woefully overused.

Insider gathered a bunch of the most painful Hinge clichés and asked CEO Justin McLeod if he could suggest any improvements.

While many users may think this pun gives a sense of their sense of humor, McLeod suggested taking a slightly more direct approach.

“This [prompt] is giving you an opportunity to share what you’re really looking for in a partner, what you want, what’s important to you,” he said. “What gets you excited about someone and what is something that someone can do that would really show that they were super interested in you?”

He didn’t go so far as to say users should steer away from the “trip me up” pun entirely.

“It’s another way of showing your personality … So there’s no bad answer in that sense. It’s showing that you’d rather take this opportunity to make a snarky remark versus shar[ing] that side of yourself,” he said.

Mashable’s Rachel Thompson wrote about why this prompt can be a red flag to some Hinge users, as it can unintentionally send out signals that the writer could be a bit of a dating nightmare.

McLeod had some suggestions for how users could make this answer a bit less daunting.

“The more specific that we can be the better,” he said, recommending that users give an actual example of what they mean.

“The more that you can take the opportunity to say what you mean by ‘doesn’t take themselves too seriously’ – or [give] an anecdote,” was his recommendation.

“I’m overly competitive about… everything”

Once again, McLeod suggested refining this answer with a little specificity.

He also gave the tip that users shouldn’t only be thinking about their own personality when answering prompts.

“I think that you just also have to think when you’re answering these prompts – if you want to do it effectively – is how can someone respond to this?” he added.

“Am I making an opening or a hook for someone to be able to start a good conversation with me? And so if you say ‘everything,’ then there’s not a real opportunity for me … I don’t know what to respond to that.”

Anything that mentions “Pineapple on pizza”

McLeod said he’s aware that stereotypically divisive food choices like pineapple on pizza or cilantro common themes on Hinge. He didn’t rule them out as an opener, but says users have to be ready to move the conversation along at a fast clip. 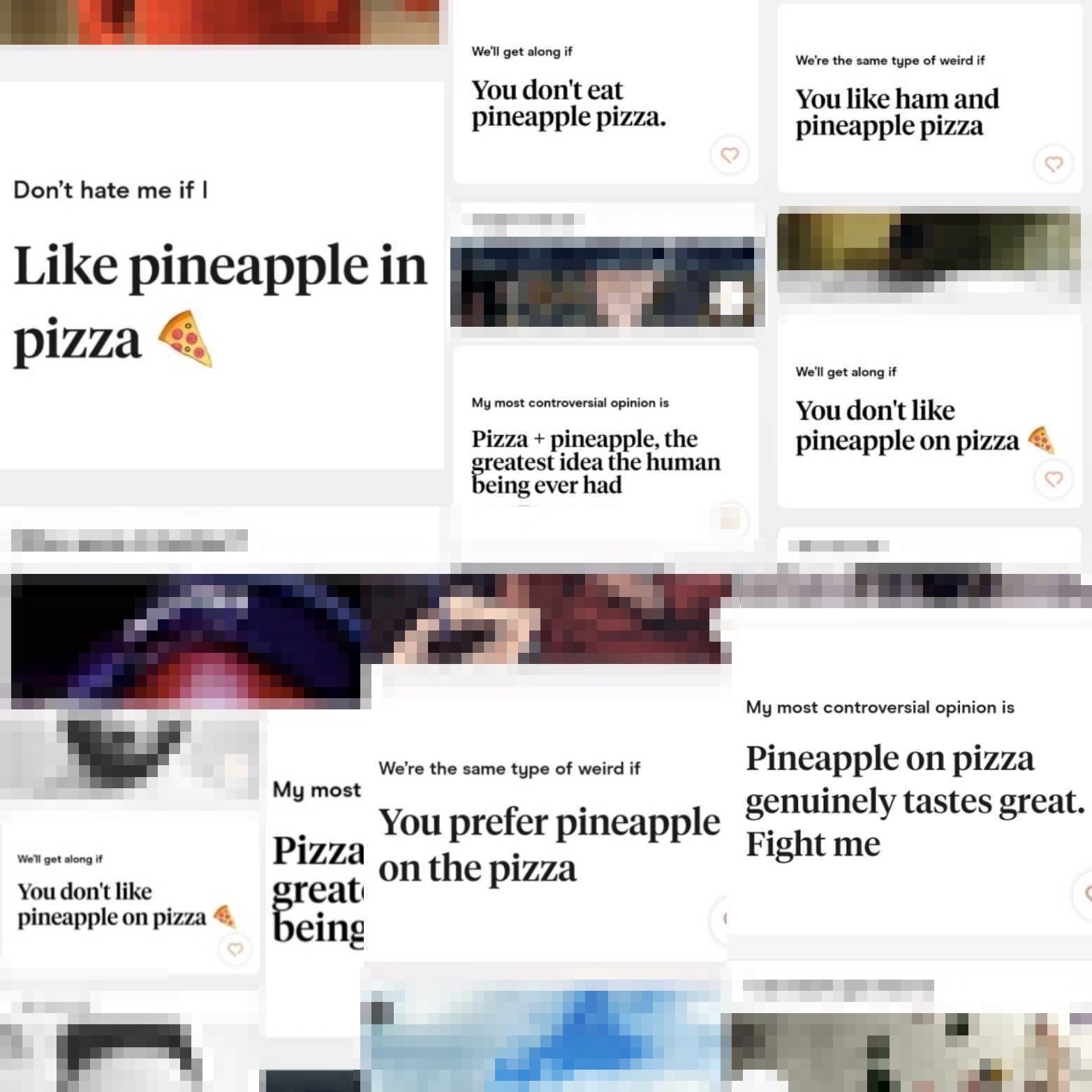 InsiderPineapple on pizza is a recurring theme on Hinge.

“I think they can open up a conversation, but I think it has to move pretty quickly from there, right?” he said.

“There’s only so much to say about whether or not you like pineapple on pizza.”

“I’m a regular at… my fridge/my living room”

A pandemic-specific cliché, McLeod rates this line more highly than the others.

“I would give that one a higher rating because at least you’re talking about a current event that you both have a shared experience of, and it has a little bit of humor around. So I do think that that gives you a little bit more of an opening to like start a conversation,” he said, adding that if users use “their fridge” that gives people the chance to ask what’s inside.