Woodward AcademyA high school in Georgia hand-delivered gifts to seniors on their last day of school.

As the end of the academic year approaches, schools across America remain closed because of the coronavirus.

Although distance learning is necessary for the time being, it’s hard on teachers and students alike, with graduating seniors having a particularly difficult time.

The class of 2020 is being robbed of the opportunity to celebrate the end of high school with their loved ones, and they’re missing out on rituals they have seen previous classes enjoy: prom, the last day of school, and graduation.

But Woodward Academy, a school in College Park, Georgia, decided to bring some of that end-of-year joy to its graduating class, despite the circumstances. The school has been closed since March 12, when Georgia Gov. Brian Kemp closed public schools throughout the state.

Woodward typically has a myriad of end-of-year celebrations for its seniors: the prom, a formal baccalaureate dinner, and even a “Last Blast” where the seniors have a sleepover at the school to celebrate their accomplishments.

Woodward hopes to put these events on in July if it’s deemed safe for the students to gather by then, but the administration didn’t want the seniors’ last day of classes, which was April 28, to pass without recognition, particularly because the school year ended so abruptly, as Dr. Stuart Gulley, the school’s president, told Insider.

“Some students still have things in their lockers they haven’t gotten yet,” he said.

As members of the administration began talking about how they could best accommodate students, they decided it was important to them that the seniors knew they were thinking of them on their last day.

“People who go into education do so because they are relational individuals,” Gulley told Insider. “So to not have the day-to-day regular contact with folks in person is just really diminishing.” 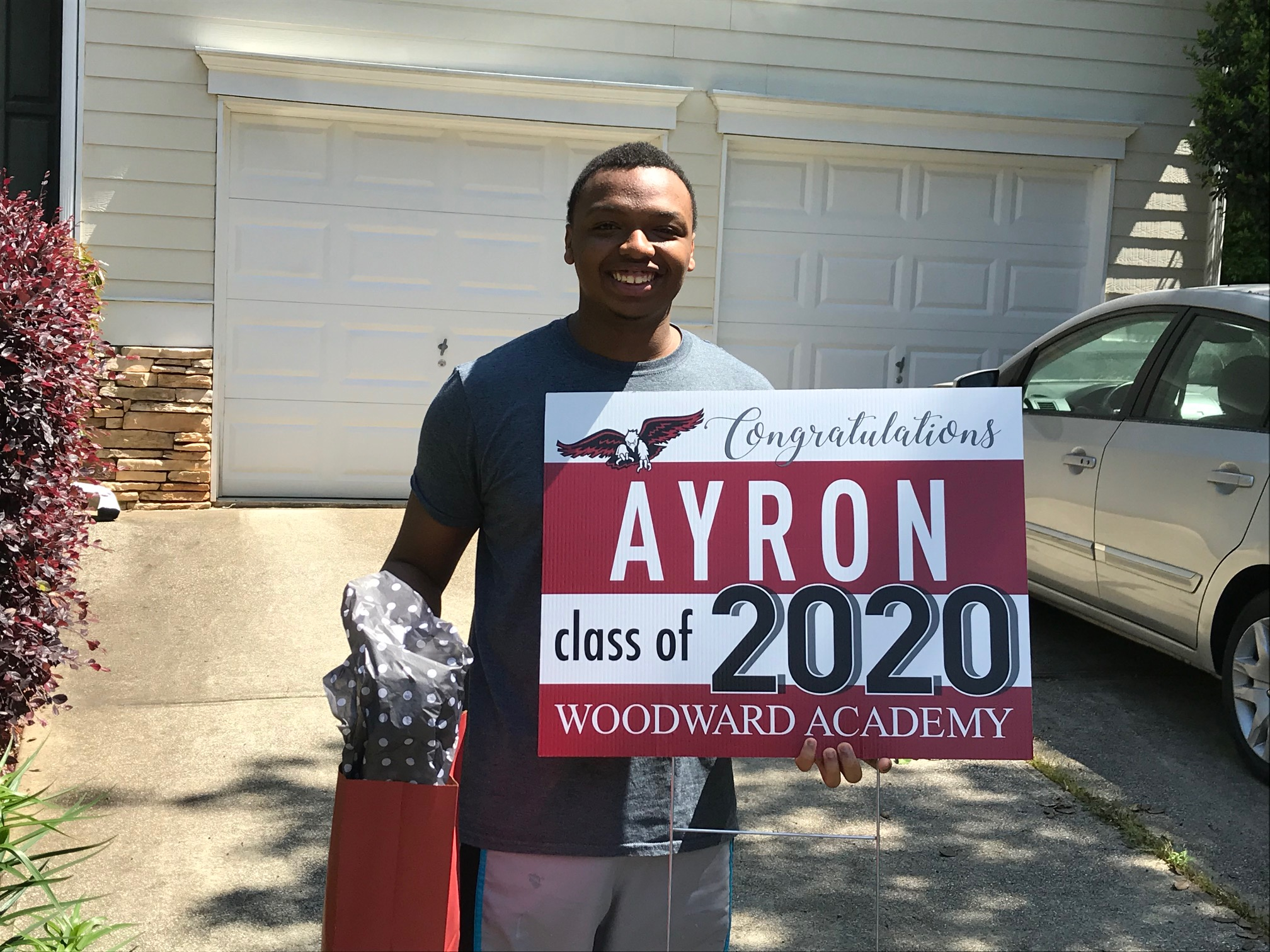 Woodward AcademyAll 257 members of the graduating class received a delivery.

Each senior received a gift bag that contained cookies and brownies in the shape of 2020, a laundry bag embossed with Woodward Academy on it, red and white M&M’s with 2020 on them, and a T-shirt.

Woodward also provided each 12th grader with a personalised congratulatory yard sign with their name on it.

The Academy’s dining staff volunteered to make the cookies and brownies, and 19 teachers, counselors, and administrators offered their time to deliver the goodies.

As an added touch for the seniors, the staff delivered the gifts using the Woodward Academy buses, surprising them with a symbol of their school on their doorstep.

Everyone involved in the deliveries was provided with gloves by Woodward, and anyone who didn’t have their own mask was also given one made by the school’s staff.

“We have some nurses and some of our administrative assistants who can’t work right now, so one of the things that they’re doing with their time is making masks for people,” Gulley told Insider, who wore a mask made by Woodward staff to make the deliveries.

“Anyone who’s having to work on campus, they have made masks with those individuals,” Gulley said.

“It took the better part of the day. We started out at 9 a.m.,” Gulley said of the deliveries.

“It probably took until about 4 p.m. to get them all delivered.” Woodward AcademyIt took all day to deliver the gifts.

Gulley said the students were shocked and elated at the deliveries.

“It made our day to see how genuinely happy they were to see us and then to understand what we were giving them,” he said. “The significance of the day I think just made it very meaningful.”

Gulley said students who got deliveries in the first part of the day posted on social media about the surprise, alerting their classmates as to what would happen and making them even more excited.

“There were some reports of parents and students standing outside waiting for the bus to show up,” Gulley said of the students’ excitement.

Woodward also made a special delivery to Lance Bottoms, a senior and the son of Keisha Lance Bottoms, the mayor of Atlanta, which made the day even more special. Some deliveries took longer than others, with staff going the extra mile to make sure every senior got special treatment

Woodward’s student body lives all over the metro Atlanta area, with many of its students commuting over an hour to get to school each day.

But the distance didn’t stop Woodward staff from getting to the students, as Gulley explained with a story about a student who was staying in a cabin in the woods located an hour away from the school. 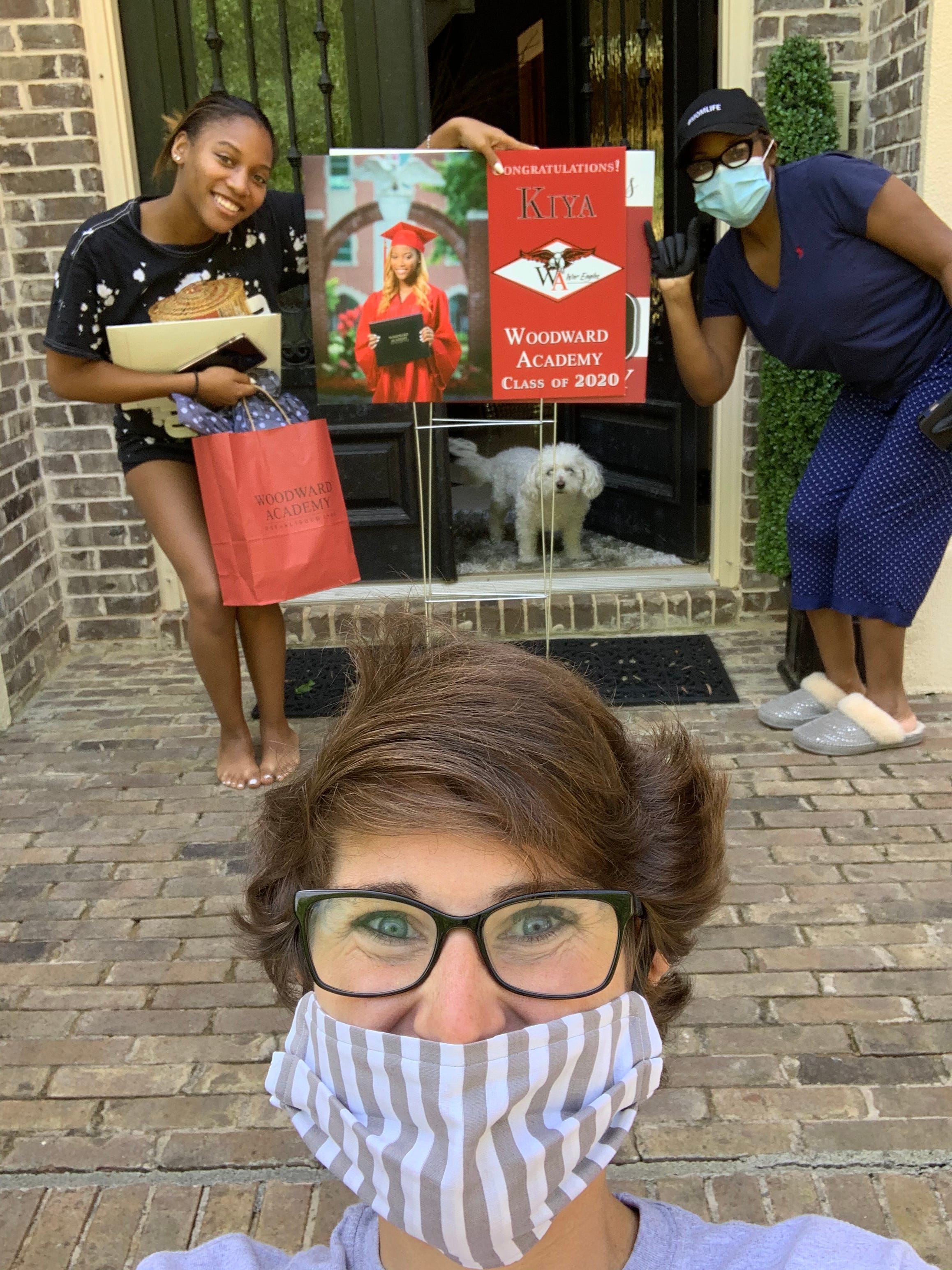 Woodward AcademyThe staff went above and beyond to get gifts to every student.

“They couldn’t find exactly where the house was,” he said of the staff delivering to the family. “So a neighbour saw and said, ‘Well, just follow me.'”

“They went on a back-road route and finally ended up at this cabin. And of course, you can imagine the shock on the faces of this family that they found them and were able to make the delivery.”

“The reactions were just priceless, and it made it worth all the effort and cost associated with doing it,” Gulley said of the surprise for the seniors.

You can find out more about Woodward Academy here.