The 12 best hidden features in the new iPhone update

Apple updated the software on iPhones and iPads on Monday.

Although Apple is advertising some of the new abilities your phone just received, like a new mode that makes reading easier at night, many of the best tweaks go unadvertised. Often iPhone users have no idea they even exist.

After a week of using iOS 9.3, I went through the changelog and forums to find the best new hidden features.

But first: if you don’t have the update, grab it in Settings > General > Software Update.

One of the new biggest improvements in the latest version of iOS is that you can hide those Apple apps you don't use anymore. It's not easy, but it's possible. Full details here. It's quite an involved process that involves wiping your phone, installing Apple Configurator, a free tool usually used by system administrators, and removing specific package modules. But it might be worth it to clear your phone of your junk Apple folder forever.

9.3 adds the ability to hide applications on the home screen based on the bundle ID. Create a configuration profile in Apple Configurator 2.2 Beta with a restrictions payload set to 'Do not allow some apps' under 'Restrict App Usage' in the Apps section of the Restrictions. Add the necessary bundle IDs like com.apple.tips, com.apple.stocks, then plug in your device and apply the profile. The icons will simply disappear from the home screen.

But before you do that, give those unused Apple apps another spin, because many of them have new features. For example, in the Activity app, there's a new Workout tab that collects your physical activity. The Apple News app has also been revamped, with a new shortcut to help you customise your news feed. Simply swipe left or right on a story to train Apple's algorithm what news you like or dislike. Try swiping from right to left, as well.

Apple Maps also got more useful, with a screen that tells you everything to eat and drink nearby, with data from Yelp. Instead of typing in an address, simply click on the search bar, and you'll see options for notable nearby businesses.

The Maps app also snuck in a new way to check out stops on a specific transit line. Simply tap on the line you want to look at. That's how it works in New York, and other cities with transit support in Apple Maps.

It's also really easy to make a copy of photos now in case you want to modify a photo but still keep the original. In the photo app, after you select a photo, the button should be on the bottom. The wallet app -- also known as the Apple Pay payment screen -- also got a great new shortcut. If you've got a credit card or airline boarding pass, and you're using it, a shortcut to the company's main app is available in the corner. If you use a keyboard with your iPad or iPhone, you'll find getting around is a lot easier. It's now possible to use a keyboard's arrow keys to go through the Mail app, and using the spacebar to scroll through Safari is smoother than before. Here's another great new keyboard shortcut. If you want to go to the home screen on your iPad, the new shortcut is Command + H. Another recent addition is that you can use Cmd + Space to search using Spotlight, and if you just want to pick the top choice, hit enter. Wi-Fi Assist was introduced last fall and is a killer feature for when your Wi-Fi connection isn't great. But it can eat through your data plan rather quickly. Check that it isn't by visiting Settings > Cellular. The toggle is below all of your apps. One of Apple's big updates is that you can now lock the Notes app with a password or TouchID. You'll find the setting in Settings -> Notes -> Password Protection. Expect this feature to spread to other Apple apps. It would be great for Messages.

And Apple also made a big deal about Night Shift, a new setting that makes the iPhone's screen emit softer light at night. But it's impossible to have Low Power Mode and Night Shift on at the same time. But the Apple experts at 9to5Mac have a workaround. 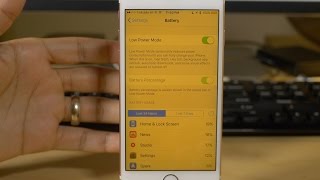 This tip's only for people with the latest iPhones -- the 6S and the 6S Plus -- but Apple's 3D Touch has gotten a lot of new shortcuts. If you press down on the Camera app, for example, it gives you an easy shortcut to take a selfie.