‘Her’In ‘Her,’ all computers are controlled with touch, voice, and gestures — keyboards or mice are relics of the past.

Earlier this week, I got to see “Her,” the latest film by Spike Jonze, the director of mind-bending films like “Where The Wild Things Are” and “Adaptation.”

While I don’t want to ruin the plot for anyone, I will say that the story of Theodore Twombly (wonderfully played by Joaquin Phoenix) falling in love with his computer’s new operating system — a futuristic take on a Siri-like computerized assistant voiced by Scarlett Johansson — is incredibly romantic and probably the best science-fiction film released this decade.

What makes it so great as a piece of sci-fi is its realistic, subdued take on the technology of tomorrow. Set in what we can estimate is at least a decade in the future, the film presents a future where Siri, the Xbox’s Kinect motion sensor, and Google Glass are no longer novelties but commodified technologies — like the mouse today, they’ve been around for a while and no one marvels at the fact that they exist.

When Theodore installs 'OS One' on his home desktop, it also shows up on his phone and work computer. It's an awful lot like this Microsoft concept video of the future of Windows and Microsoft Office: 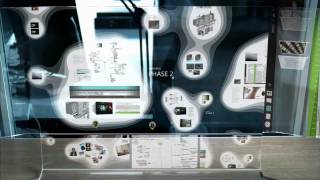 His phone, which has a camera on three sides (front, back, and inside), isn't the primary interface for interacting with the operating system. Instead, it shows visuals associated with updates, like when Theodore gets an update that a celebrity has posted risqué photos online. Instead, he primarily interacts with his computer via a wireless earbud that lets him get and respond to updates at opportune moments. We're already moving in that direction: the second iteration of Google Glass comes with an optional earpiece for that exact purpose. As a side note, Peter Norvig -- Google's Director of Research -- told me that he thinks of the future of Google Glass and Google Now are short audio updates via earpiece during a brief conversation we had a few months back.

While he (or any other character in the film) doesn't wear a head-mounted camera, Theodore still captures everything he does by wearing his phone in his shirt pockets. Voice dictation and commands are available on almost any consumer gadget you can buy today, but due to unreliability and familiarity we still primarily rely on keyboards for inputting text. In 'Her,' everyone uses dictation -- for work, email, even awkward late-night sexting. The only character who doesn't use voice controls all of the time is Amy Adams, who plays a game developer and amateur documentary filmmaker. When she shows Theodore a rough cut of her film, she controls her smart TV with a combination of touch and Kinect-like gestures. When working at her in-home studio, her character uses iPad-like tablets for text input and controls and watches the output on external monitors. Intrigued? Check out the trailer for 'Her':