Here's The Real Problem: The DURATION Of Unemployment In the previous post I noted that according to the BLS there are a record 6.55 million workers who have been unemployed for more than 26 weeks (and still want a job). This is a record 4.3% of the civilian workforce.

Here are two graphs that show the level of long term unemployed by duration. 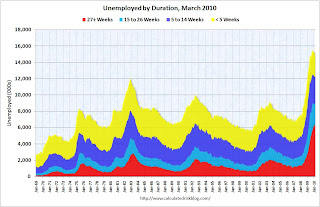 The first graph shows the number of unemployed in four categories as provided by the BLS: less than 5 week, 6 to 14 weeks, 15 to 26 weeks, and 27 weeks or more.

The second graph shows the same information as a per cent of the civilian labour force. 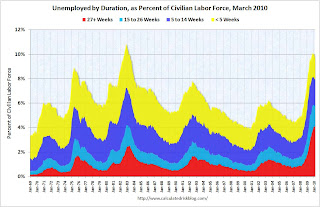 It appears there was more turnover in the ’70s and ’80s, since the ‘less than 5 weeks’ category was much higher as a per cent of the civilian labour force than in recent years. This changed in the early ’90s – perhaps as a result of more careful hiring practices or changes in demographics or maybe other reasons – but if the level of normal turnover was the same as in the ’80s, the current unemployment rate would probably be the highest since WWII.

What really makes the current period stand out is the number of people (and per cent) that have been unemployed for 27 weeks or more. In the early ’80s, the 27 weeks or more unemployed peaked at 2.9 million or 2.6% of the civilian labour force.

In March 2010, there were 6.55 million people unemployed for 27 weeks or more, or 4.3% of the labour force. This is significantly higher than during other periods.

Atlanta Fed President Dennis Lockhart made a couple of key points on Wednesday:

There are two key types of match inefficiency. One is geographic mismatch. In 2008, the percentage of individuals living in a county or state different than the previous year was the lowest recorded in more than 50 years of data. People may be reluctant to relocate for a new job if the value of their house has declined. In addition, many who would like to move are under water in their mortgage or can’t sell their homes.

The second inefficiency is skills mismatch. In simple terms, the skills people have don’t match the jobs available. Coming out of this recession there may be a more or less permanent change in the composition of jobs.

Both of these mismatches are contributing to the long term unemployment problem – and the housing bubble was a direct cause of both. Usually people can move freely in the U.S. to pursue employment (geographic mobility), but many people are tied to an anchor (their home). And many workers went into the construction trades and acquired skills that are not easily transferable. Both of these issues make the long term unemployment problem a difficult challenge.