22 photos that prove Heidi Klum is the queen of Halloween 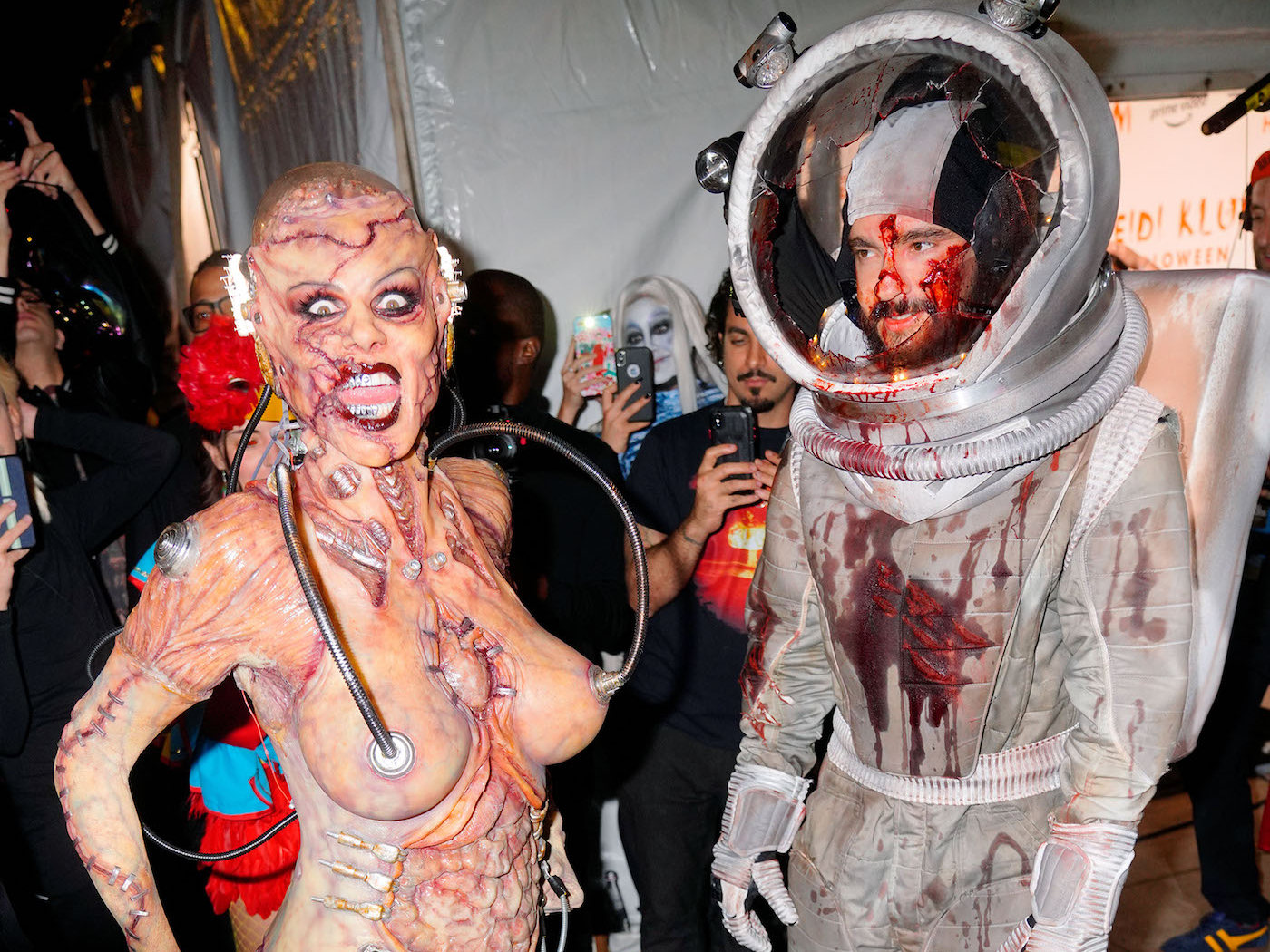 No one loves Halloween more than 47-year-old model Heidi Klum.

Every year since 2000, Klum has hosted over-the-top Halloween parties for her famous friends â€” and every year she arrives in a costume that’s somehow more jaw-dropping than the last. Even in 2020, when she celebrated at home, Klum still went all-out.

She takes this stuff seriously: In fact, nobody gets into her parties unless they’re in costume.

“I always put on my invitation, ‘Costume required,’ because if you’re not dressing up, you’re not getting in,” she told People in 2011.

Here’s a look back at all of Klum’s fabulous outfits over the years â€” including her spooky new looks for 2020.

Caroline Praderio contributed to an earlier version of this article. 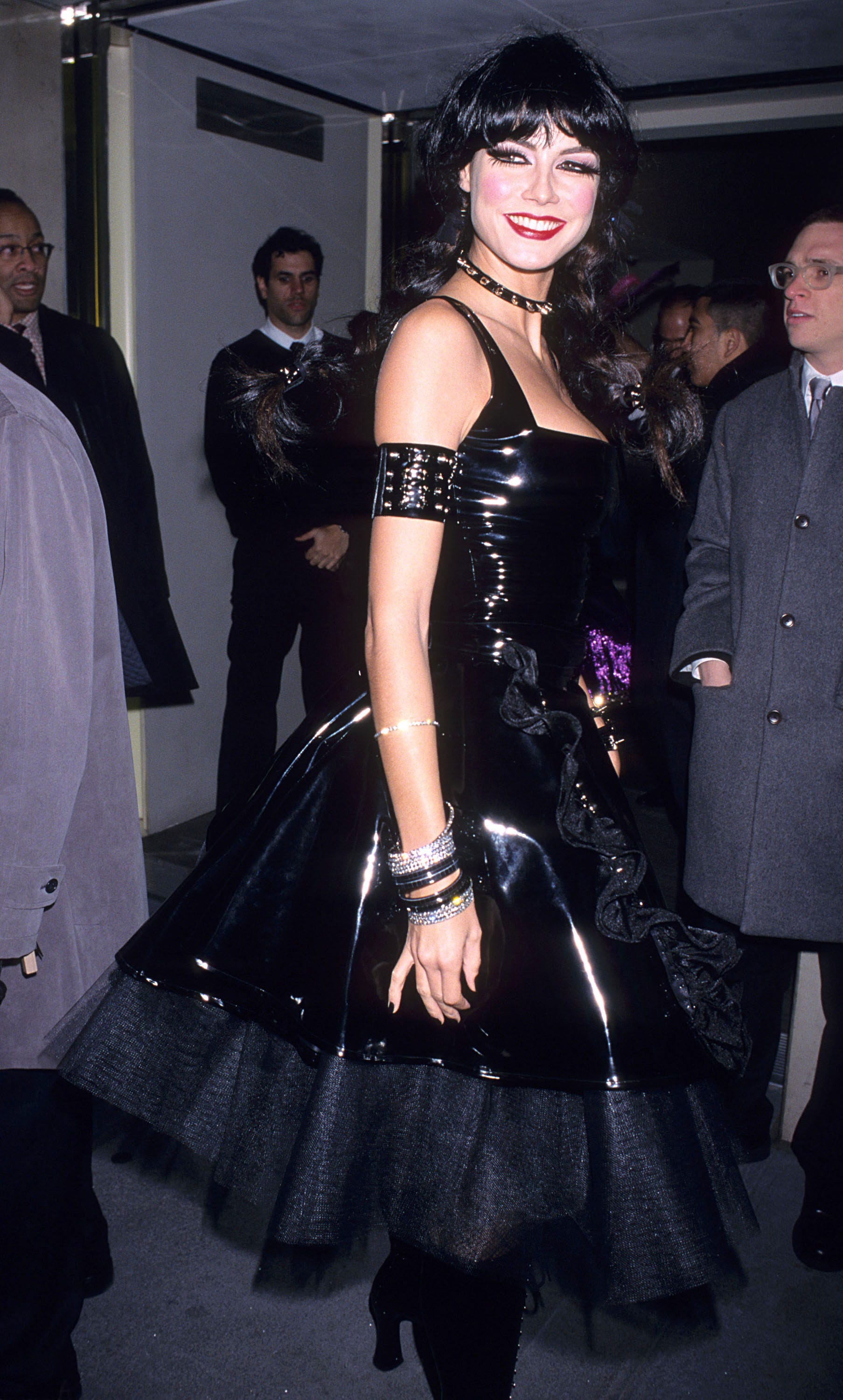 Tom Wargacki/WireImage/Getty ImagesKlum at her Halloween party in Manhattan on October 31, 2000.

That night, she rocked a goth Pippi Longstocking kind of look.

She arrived on horseback for her Lady Godiva costume the next year. 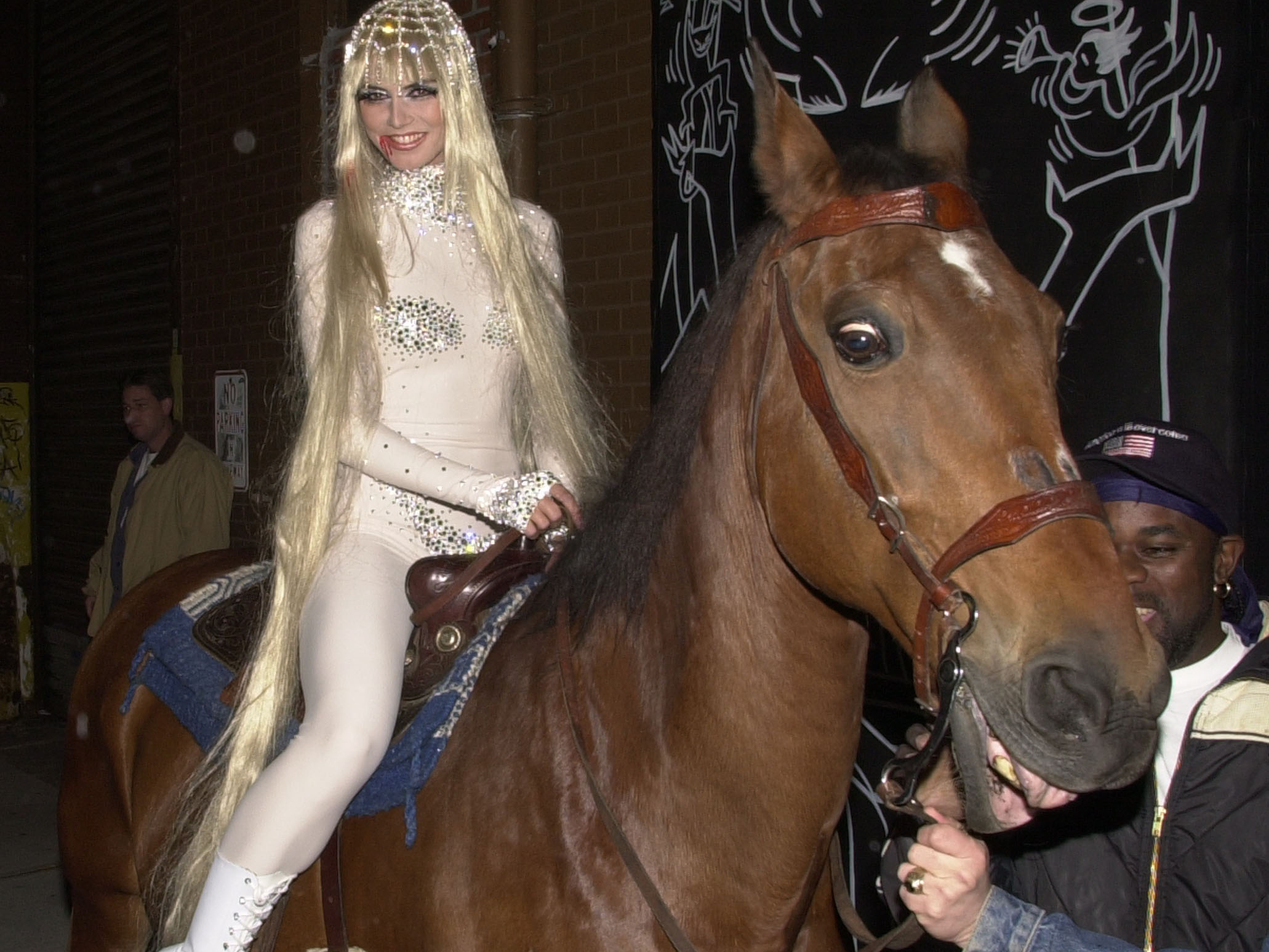 Lady Godiva was an English noblewoman – and legend says she once rode her horse through the streets of Coventry, England while naked.

She kept it much simpler in 2002, dressing up as Betty Boop.

She wore over-the-top makeup to pull off the character. 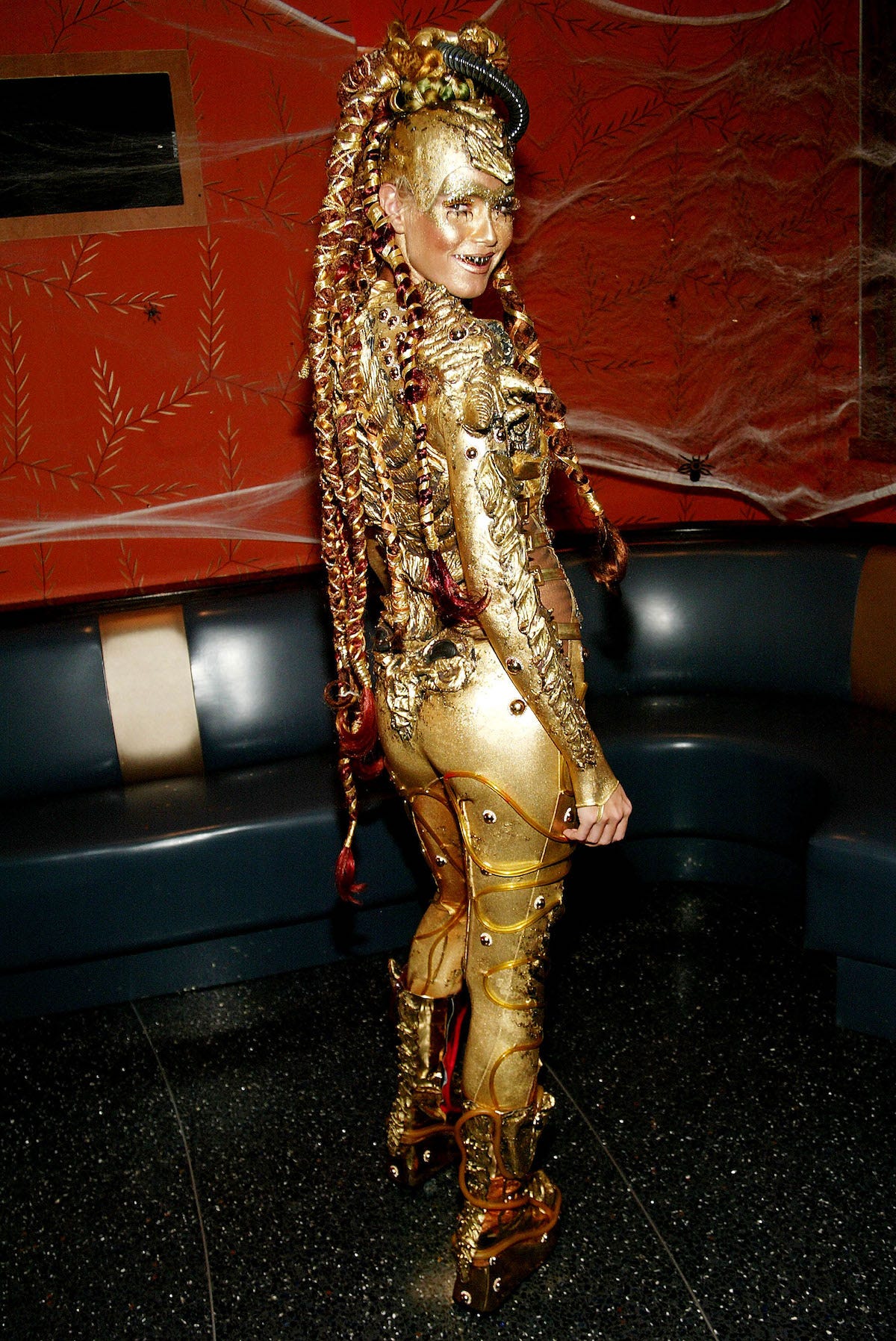 Her gold teeth and spidery lashes made the outfit surprisingly spooky. 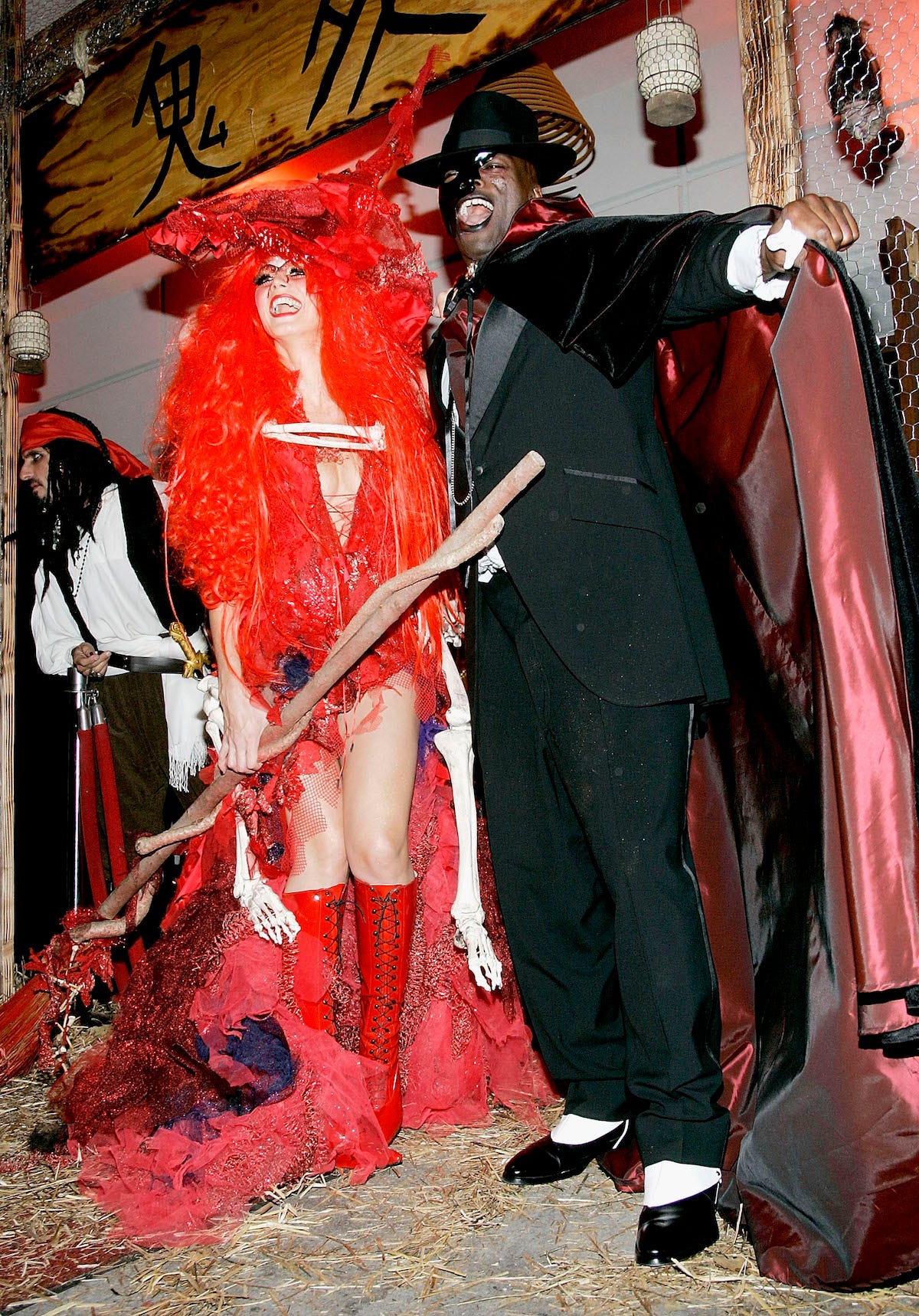 Getty/Evan AgostiniKlum at her Halloween party in 2004 with then-husband Seal.

Her then-husband, Seal, was the Phantom of the Opera. 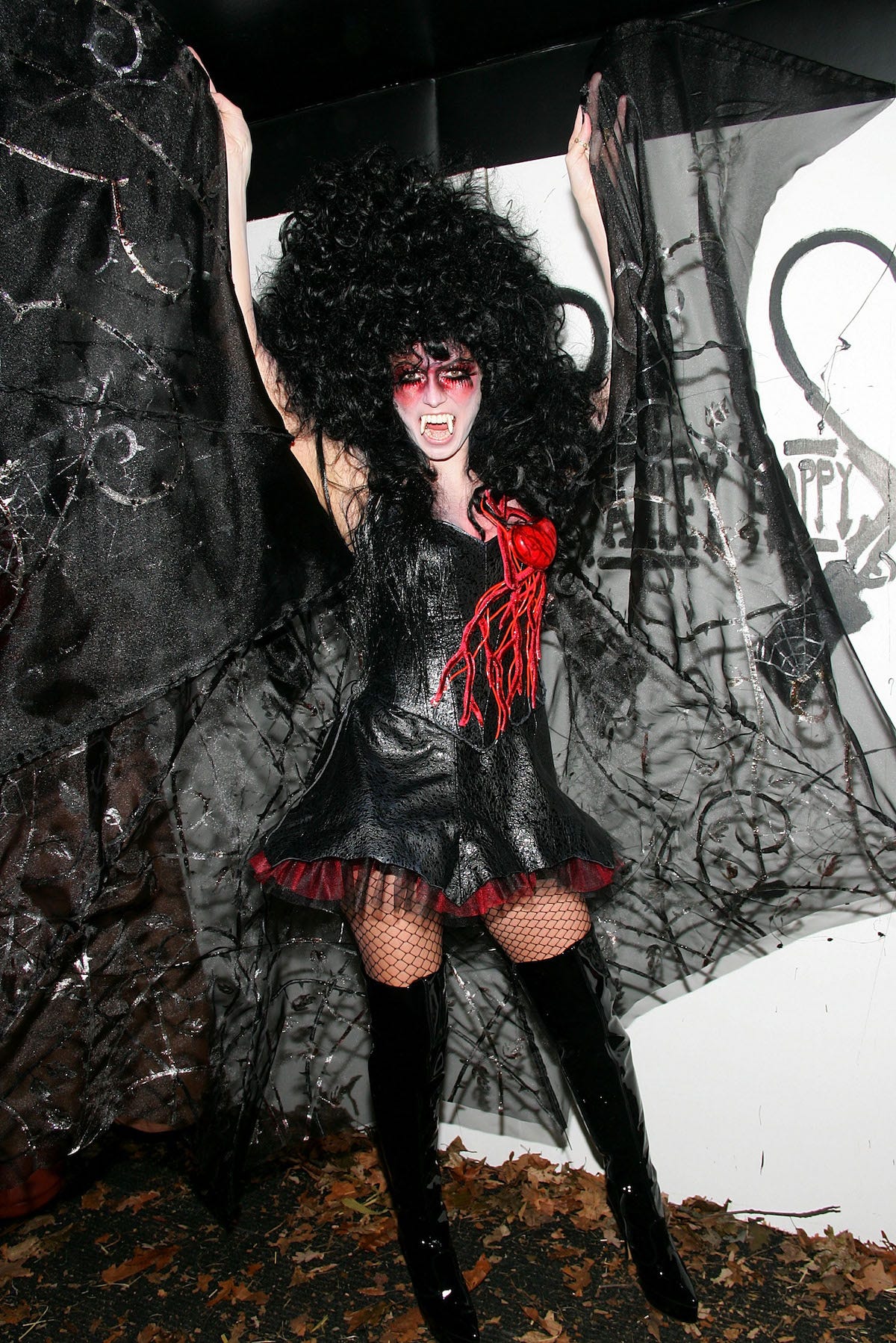 She pulled off the look with red makeup and fangs.

The following year, she and Seal paired up for an adorable couple’s costume. She was the biblical snake and apple, and he was Eve. 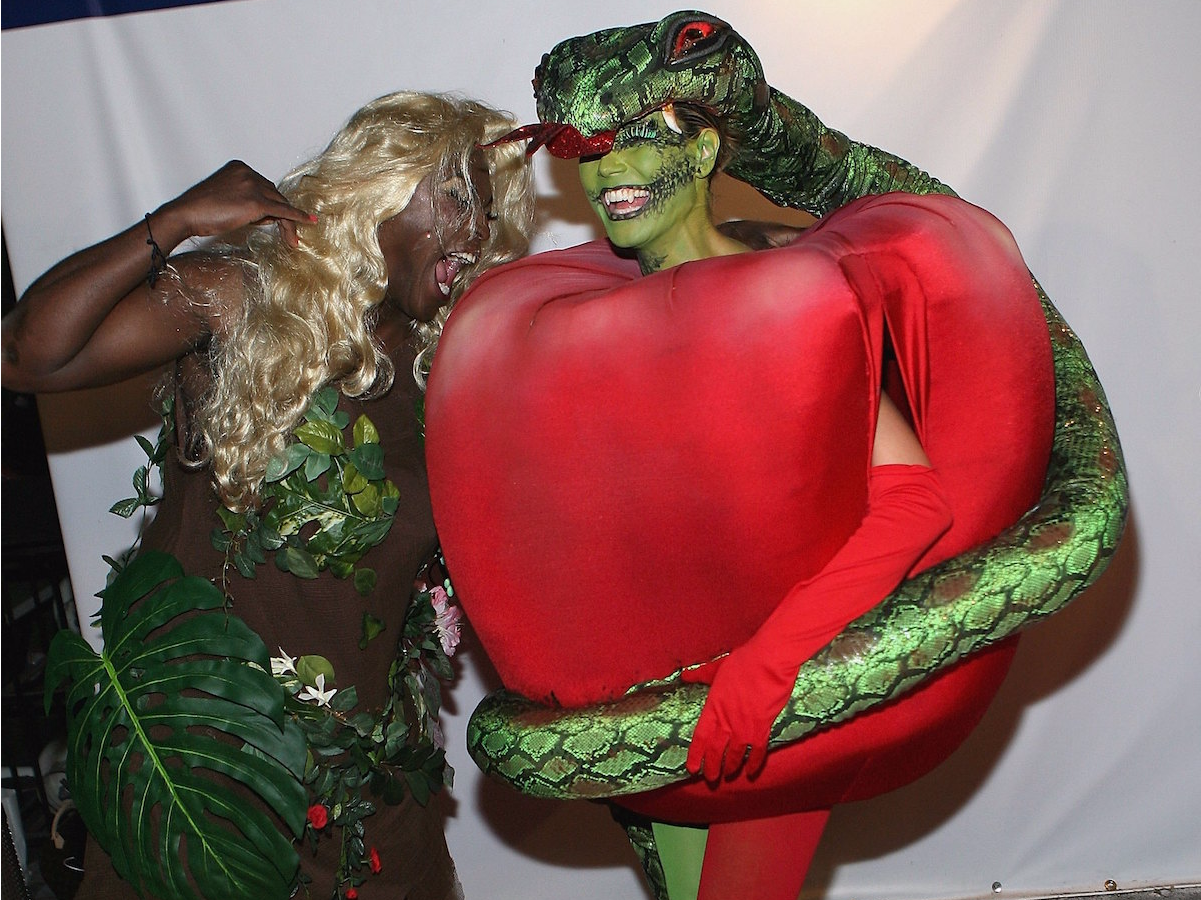 The New York Post reports that she used the costume to protect her belly – she was 9 months pregnant at the time.

She also told the outlet that she couldn’t drink water while wearing this costume. Her arms didn’t reach her mouth!

She spiced up the classic cat costume in 2007. 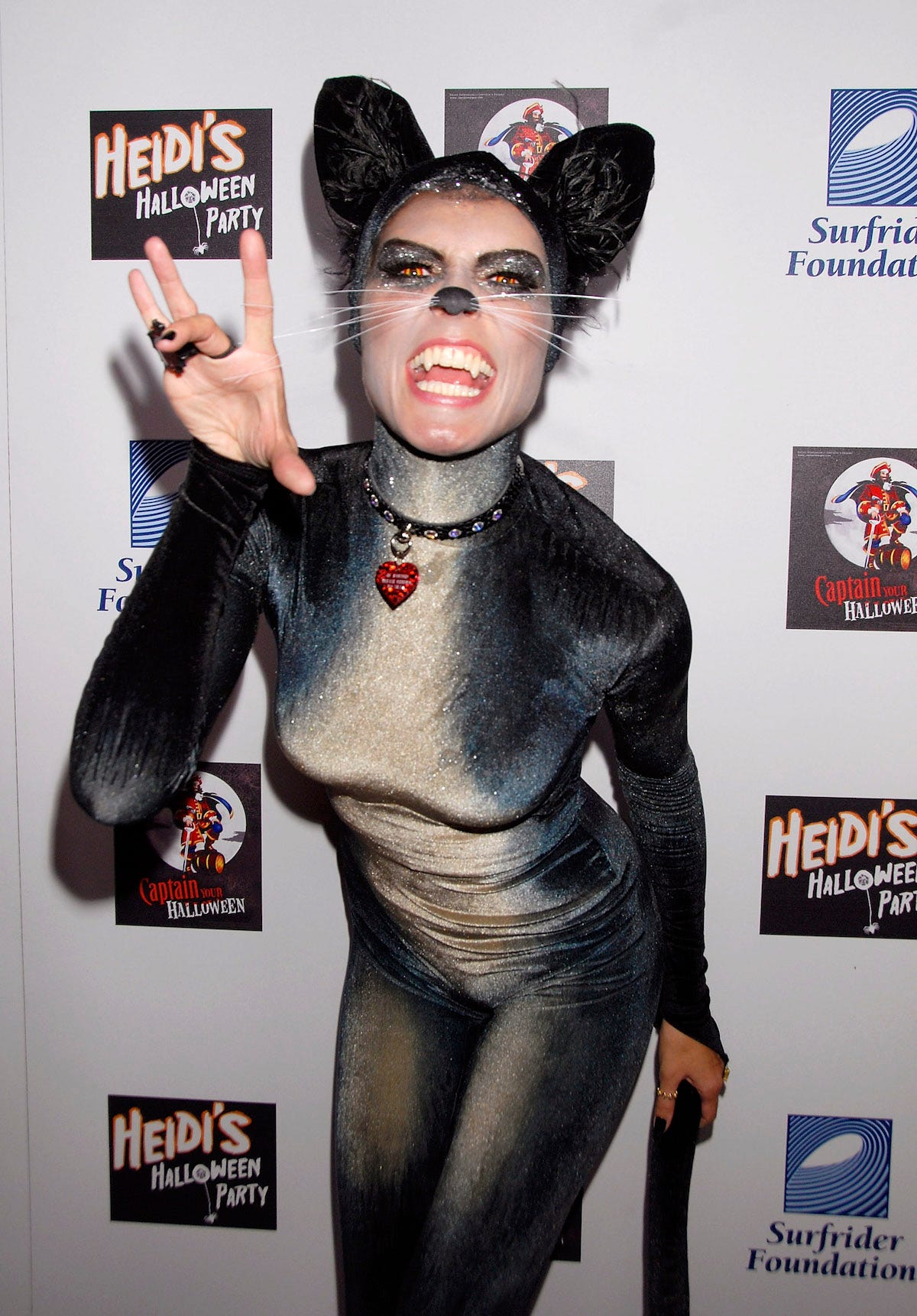 Charley Gallay/Getty ImagesKlum at her Halloween party in 2007.

She added in fangs and coloured contacts.

2008 brought Klum’s only misstep: She was widely criticised for dressing as Hindu goddess Kati. 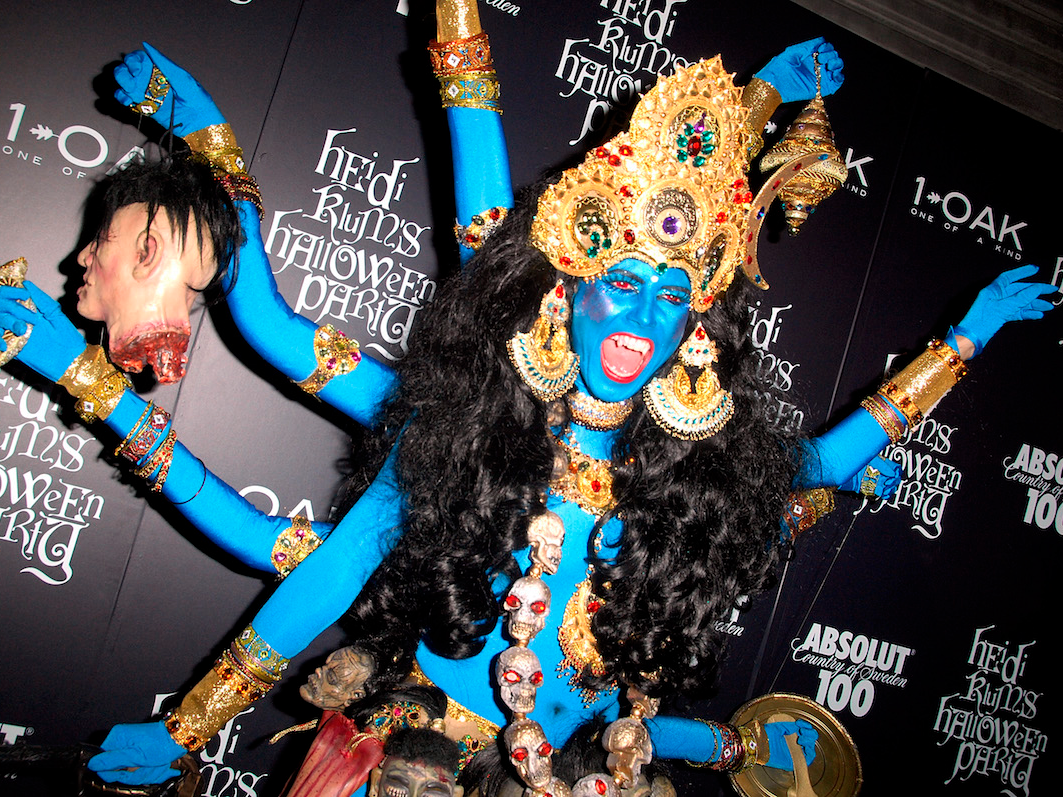 Hindu leaders said that using the likeness of the deity for dramatic effect was “denigrating,” according to Vogue.

She played it safer the next time, dressing as a crow. 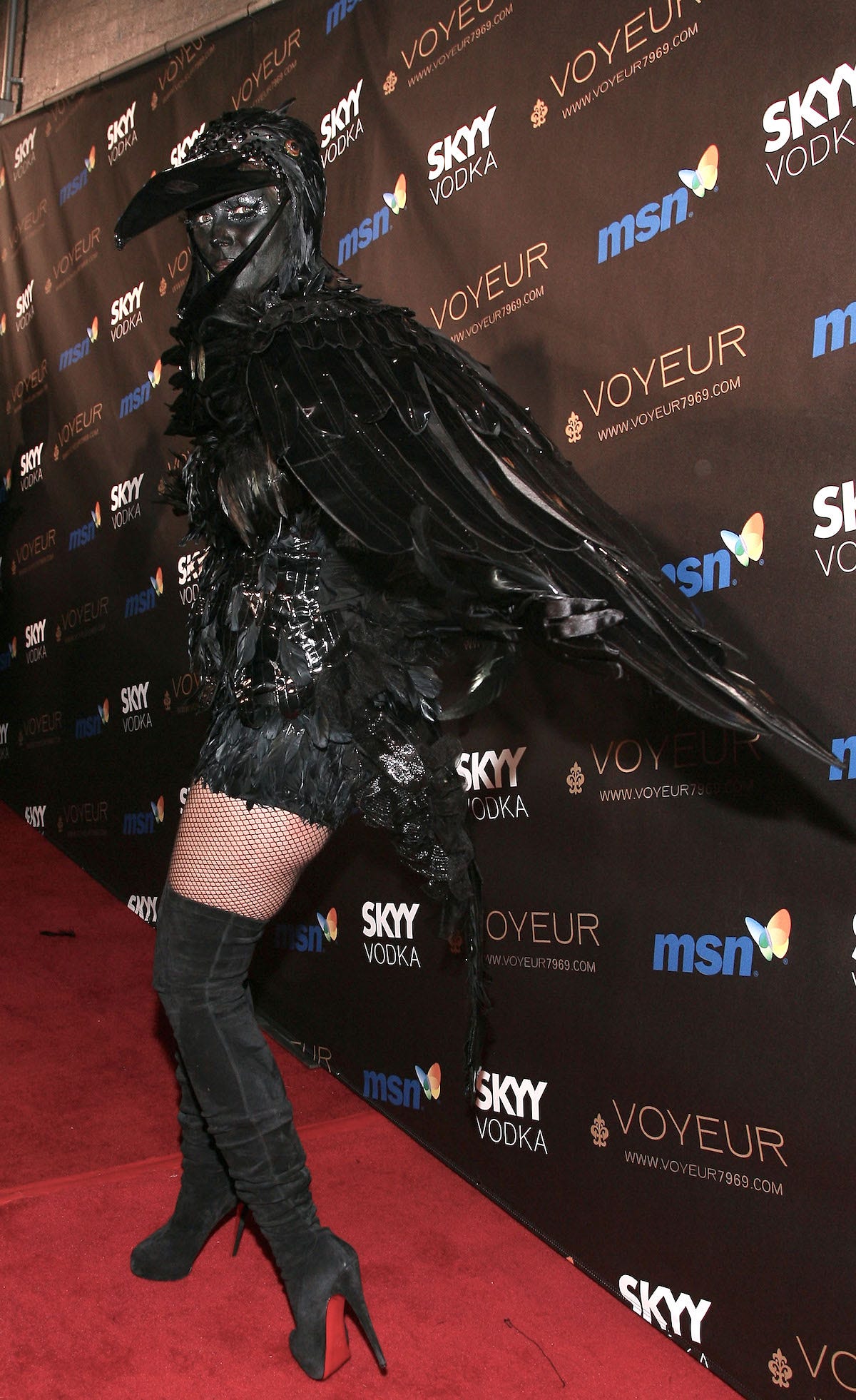 It must have been hard to eat and drink with that beak on.

Klum towered over her guests as a superhero-robot on stilts in 2010. 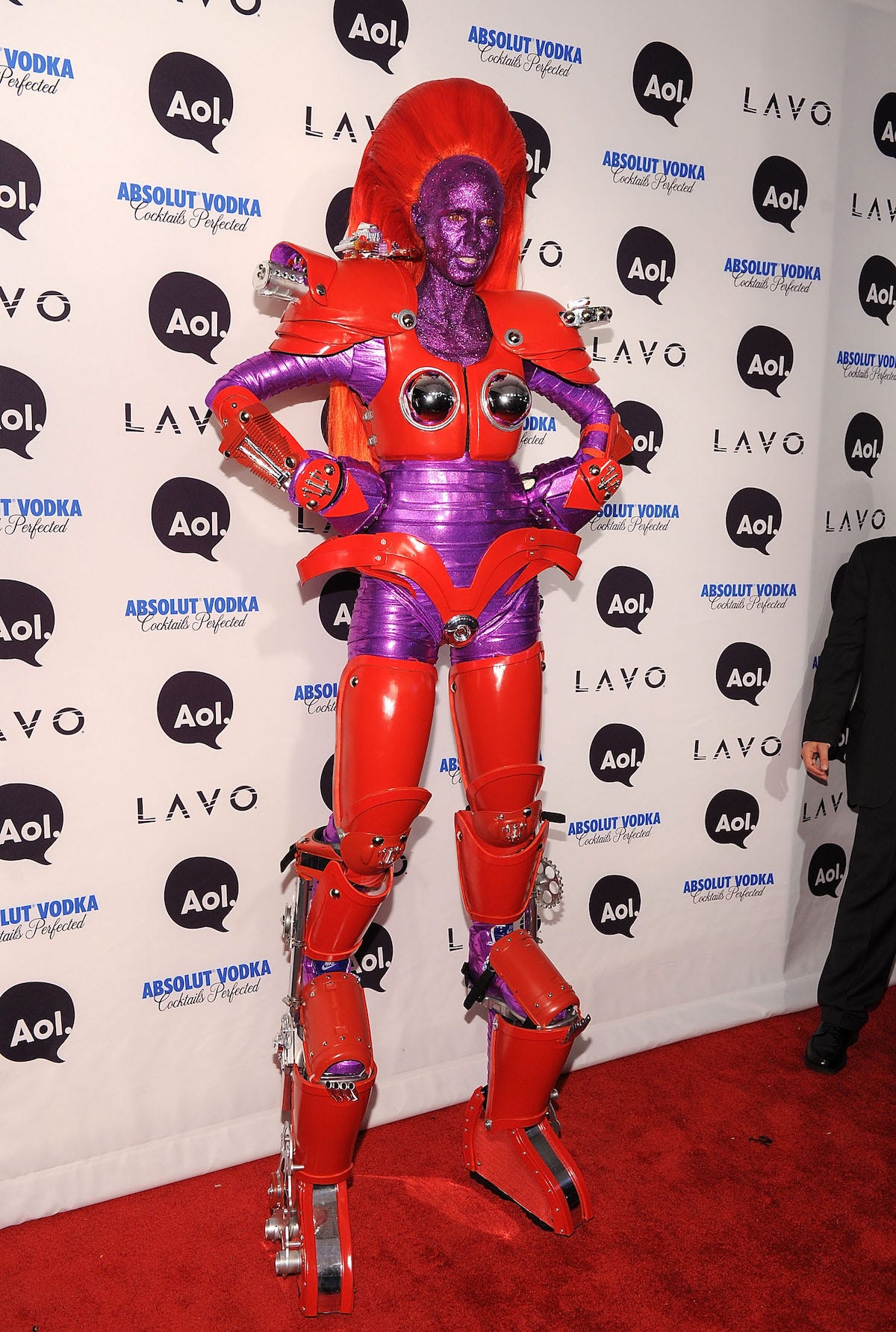 That glittery skin was impeccable.

In 2011, Klum had two Halloween parties. 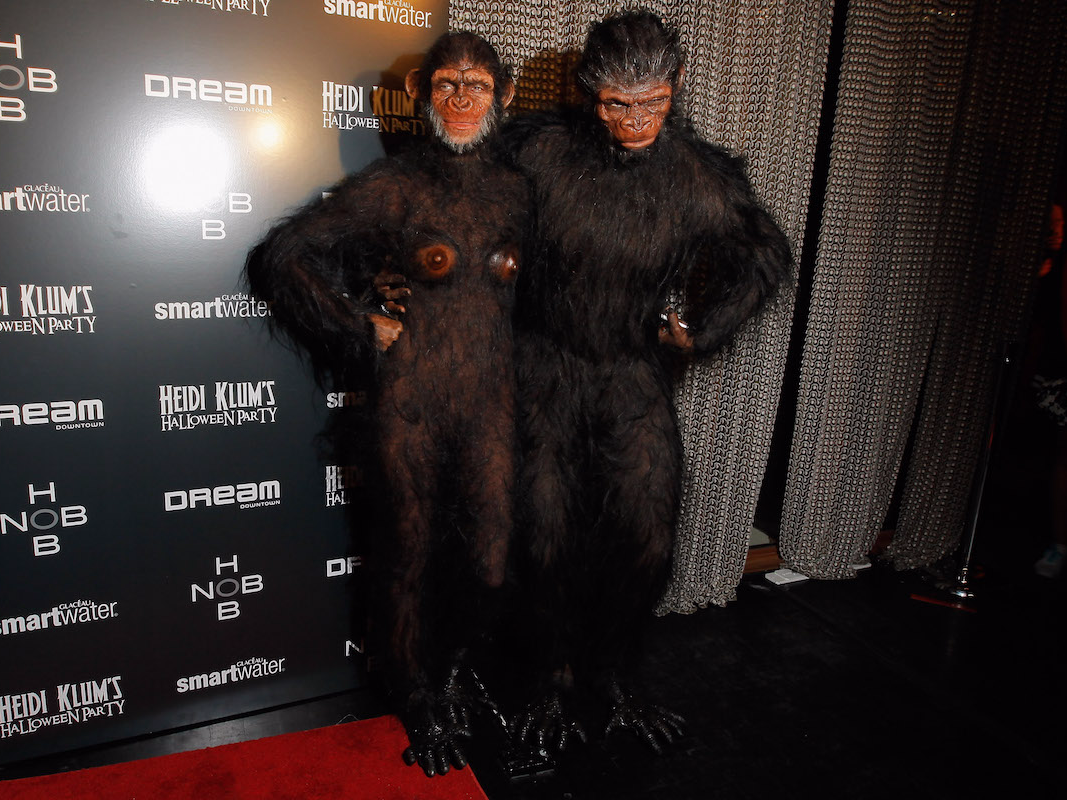 First, she and Seal went as chimpanzees.

At the next party, she was rolled in on a stretcher to showcase her jaw-dropping look. She planned a Cleopatra costume for 2012. 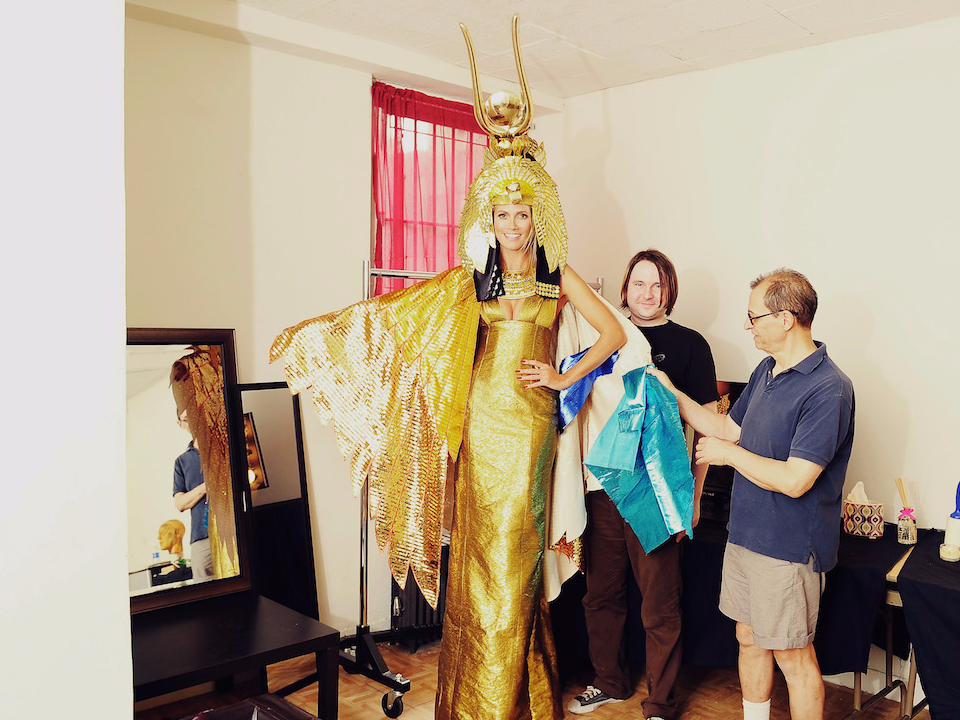 She postponed the party after Hurricane Sandy hit New York City, according to Cosmopolitan. 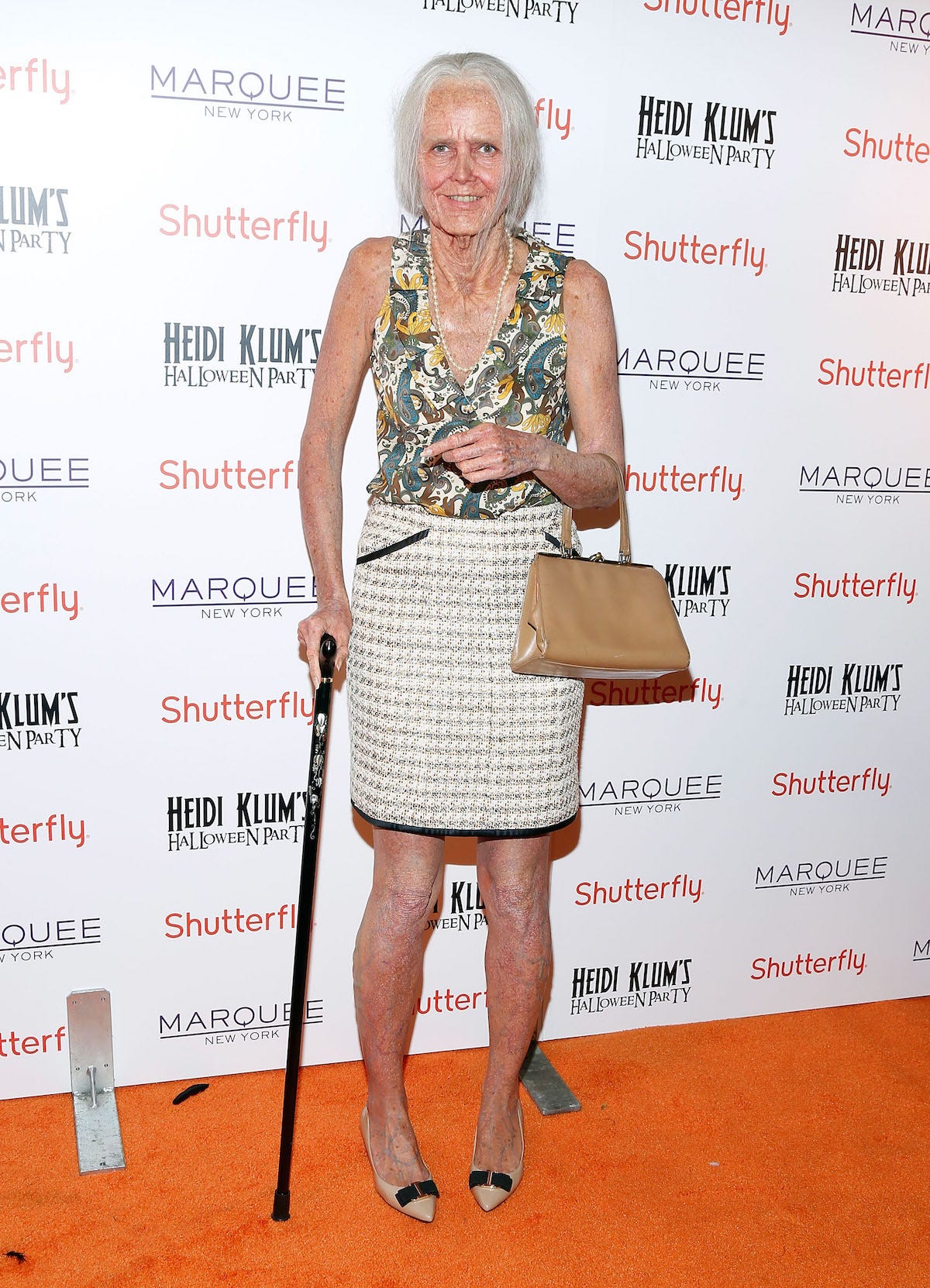 Cindy Ord/Getty ImagesKlum at her Halloween party in 2013.

The look was so realistic that she had trouble getting into the party, according to the New York Post.

The next year, she metamorphosed into a bug-eyed butterfly. 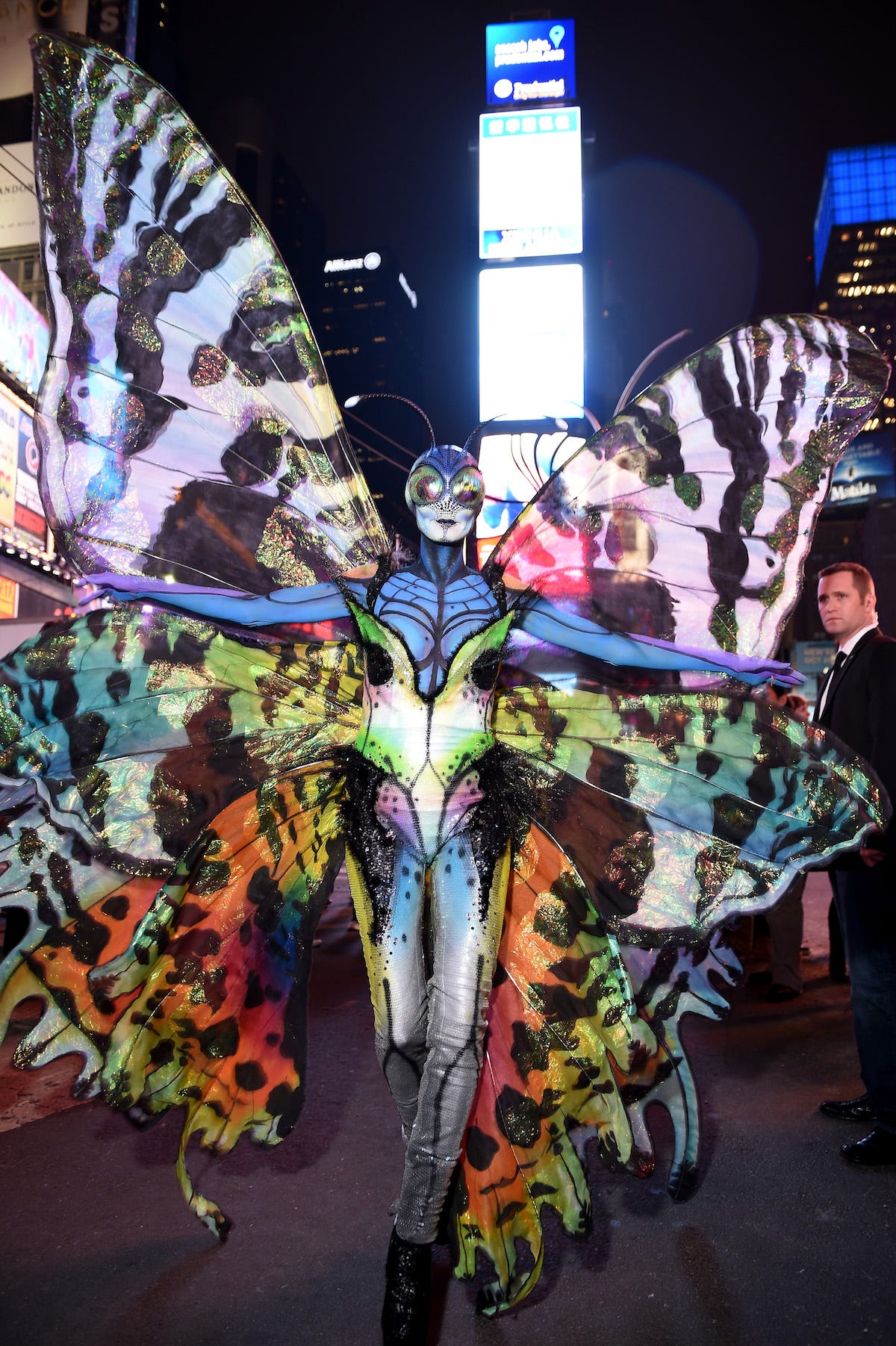 She topped off her costume with large, iridescent wings.

Klum pulled off a freakishly accurate depiction of cartoon character Jessica Rabbit in 2015. 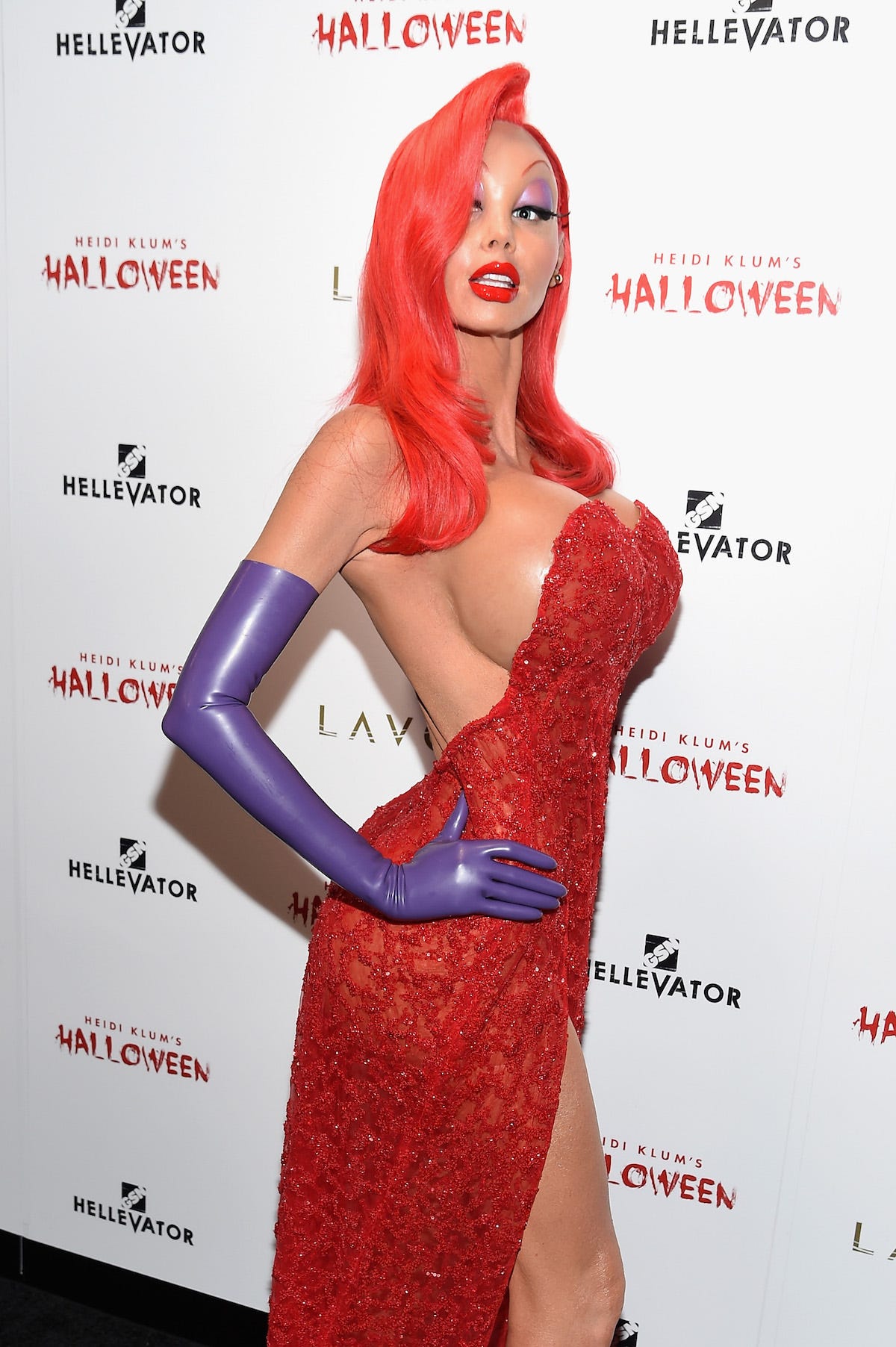 It required a ton of prosthetics and took 10 hours to complete.

And in 2016— after an excruciating wait and lots of teaser posts on Instagram — Klum arrived at her party as herself…plus 5 doppelgängers. She enlisted five models and a prosthetic artist to complete the creepy look, which reportedly cost $US10 million.

In 2017, she went as the werewolf character that appears in Michael Jackson’s 1982 music video for “Thriller.” 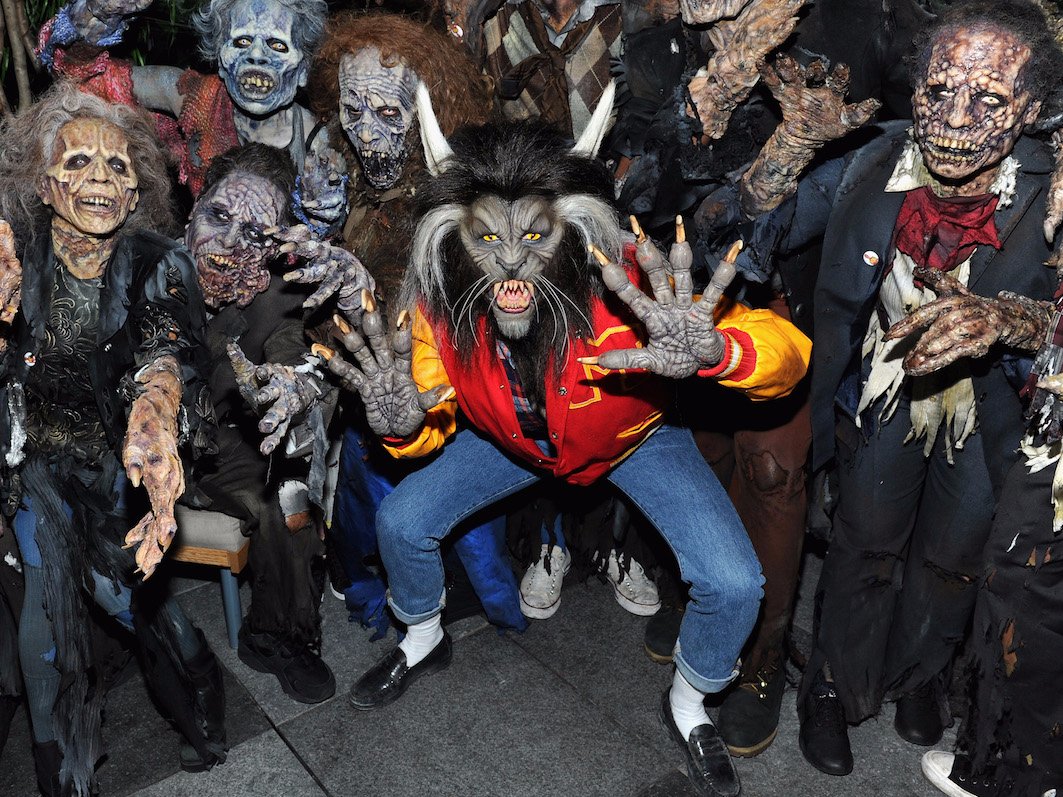 Watch the original music video here to see what inspired her. She went as Fiona, while her husband Tom Kaulitz went as the titular character.

Klum’s costume for this 2019 was her most gruesome look yet. 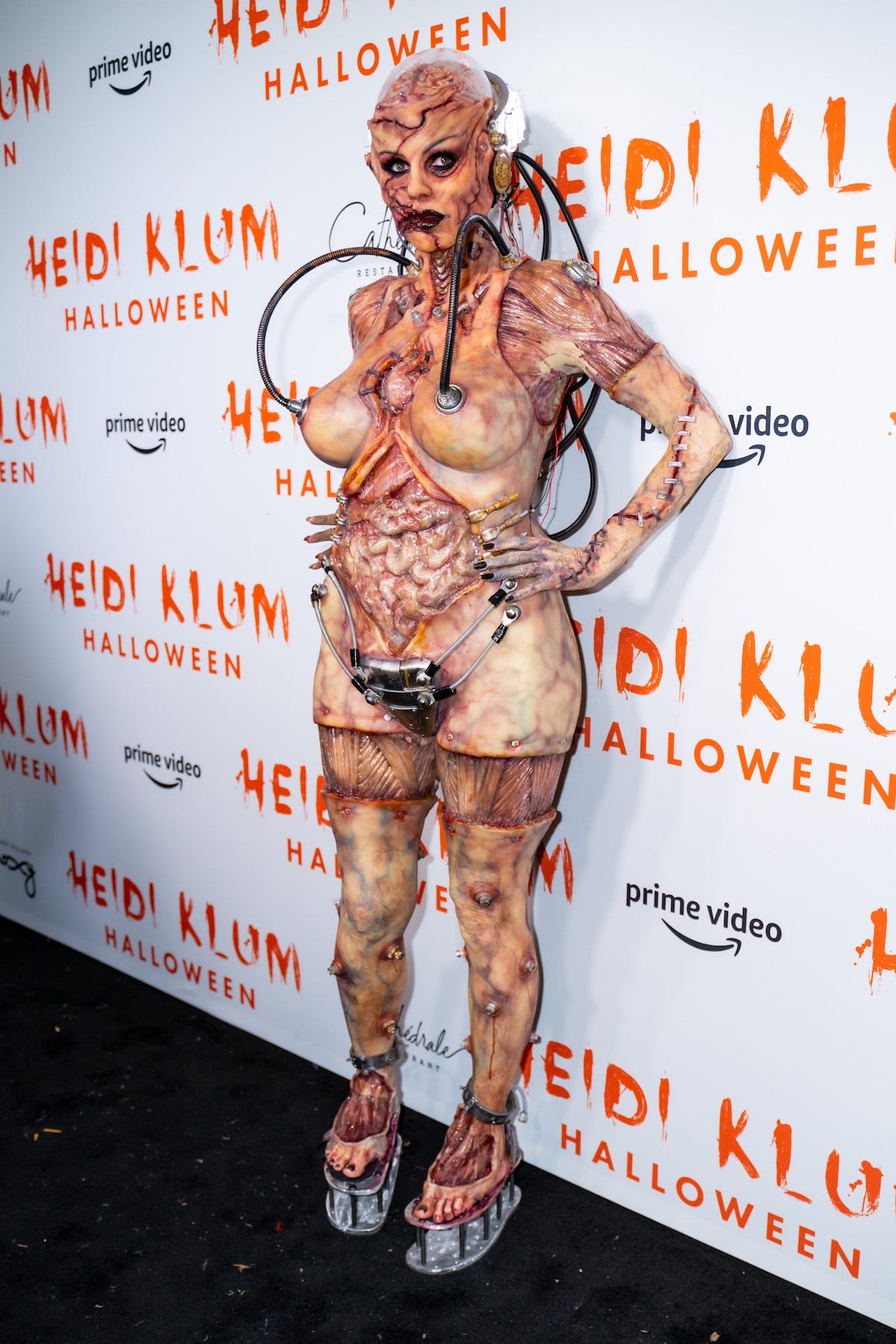 The model documented her scary transformation on Instagram as she prepared for her 20th “Heidiween” in front of a glass window at an Amazon store in New York.

Klum stayed home in 2020, but that didn’t stop her from donning a variety of spooky outfits. 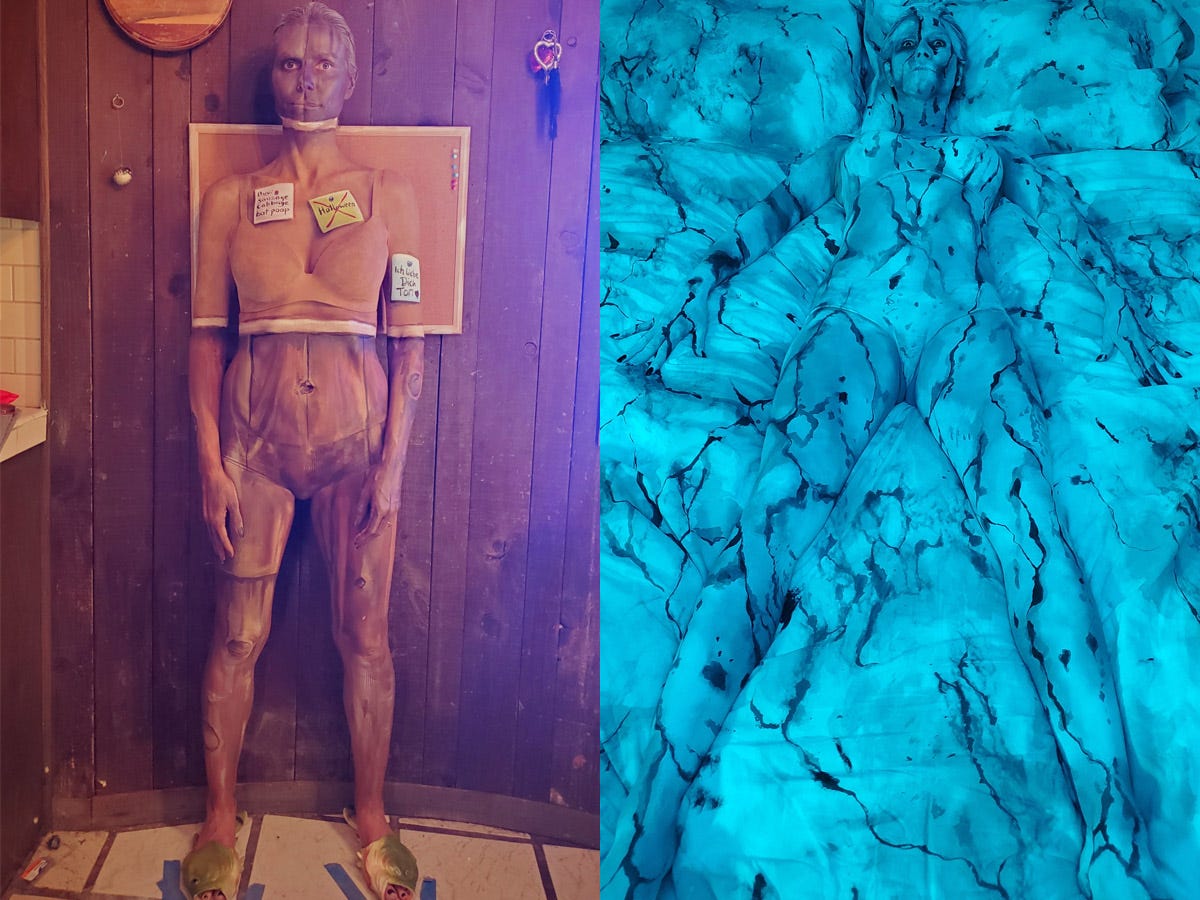 Klum gave fans a look at her costumes by sharing a short scary movie called “Heidi Does Halloween,” starring her kids and husband Tom Kaulitz.

In the video, she wore two outfits to blend into her surroundings: one that was modelled after a gory marble bedspread and another that mirrored a corkboard and wood-paneled wall.