Getting sick, missing paychecks while recovering, and returning to work through the pandemic is still a reality for many Americans like Bailey Delaplaine.

But she feels forgotten.

Delaplaine’s work as a welder at a steel factory in upstate New York has been deemed essential during the coronavirus pandemic. But many people collecting unemployment in her state are bringing in more money than she does.

“I am still mad that people are sitting at home not doing anything, making more money than me. It’s not right. I’m sorry,” Delaplaine told Business Insider Today. “It’s just not right that we have workers that are going out in this mess to do work essentially for the economy. Give us something for going out in this stuff.”

Delaplaine makes $US513 per week welding parts for construction and roads.

Meanwhile, many people who’ve been laid off or furloughed in New York state are earning about double that, thanks to the extra $US600 per week from the federal stimulus package.

Now, Delaplaine is among a growing number of essential workers who are burning out and feeling left behind.

“I don’t feel like I’m recognised at all. I’m getting nothing,” she said. “I’m not even getting a ‘thank you’ for going to work in this.

The group now has over 700 members, many of them essential workers who want the government to give them hazard pay – additional income for those still working during the health crisis. 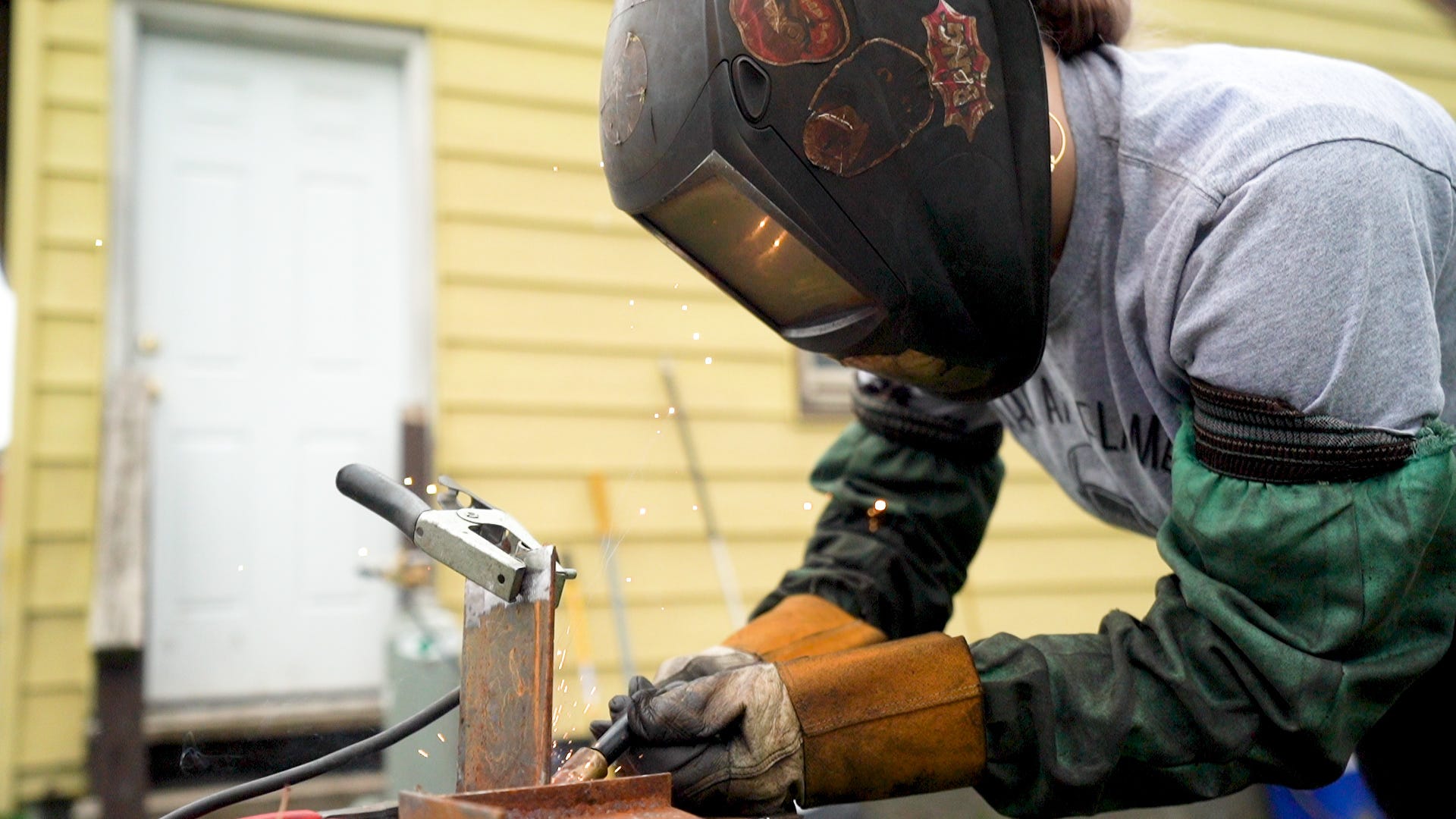 Tim Freccia for Business Insider TodayWelder Bailey Delaplaine is among a growing number of essential workers who are frustrated by low pay during the coronavirus health crisis.

So far, the federal government has approved trillions in relief funds for several parts of the economy, but none of it has gone to essential workers risking their health during the pandemic.

Senate Democrats proposed a “Heroes Fund” in early April that would give an additional premium of about $US13 an hour for some essential workers through the end of 2020. But it’s unclear if workers like Delaplaine would qualify – the proposal doesn’t specifically cover trade workers like Bailey and her boyfriend, who works in construction.

More recently, Sen. Mitt Romney introduced the “Patriot Pay” proposal, which would give some essential workers an additional $US12 an hour through the end of July. It’s also unclear whether workers like Bailey would qualify under Romney’s proposal, as the proposed list of essential industries only includes hospitals, food distributors and processors, and health manufacturers.

Still, the odds of all essential workers receiving hazard pay are slim.

States across the country are emptying their funds to pay the millions of newly unemployed people. New York, where Bailey lives, is at risk of running out of unemployment money in a matter of weeks. And funds in 21 states were already below the minimum threshold to pay benefits.

Meanwhile, Delaplaine is falling behind on her bills. She was sent home for two weeks at the end of March because she was coughing and had lost her sense of taste – two symptoms common of COVID-19.

She never got tested, because without shortness of breath and a fever, her case wasn’t considered severe. But those two weeks without pay have taken a toll.

“I’m behind on my gas and electric right now. Thank goodness they’re not shutting people off because of this,” she said. “I believe our Spectrum bill is overdue. My student loans that are $US90 a month, I’ve just kind of put those on hold because I like eating more than paying my student loans.”

Her Facebook group has become the one place she feels heard.

“We’re just looked over right now and it’s not right. We all deserve recognition,” Delaplaine said. “And whenever I see a welder or a landscaper or any anybody in a blue collar trades position on the page, I make sure I react to their comment, react to their posts. And I’m like, yes. As a fabricator, I am here for you. I am fighting for you. I’m on your side.”