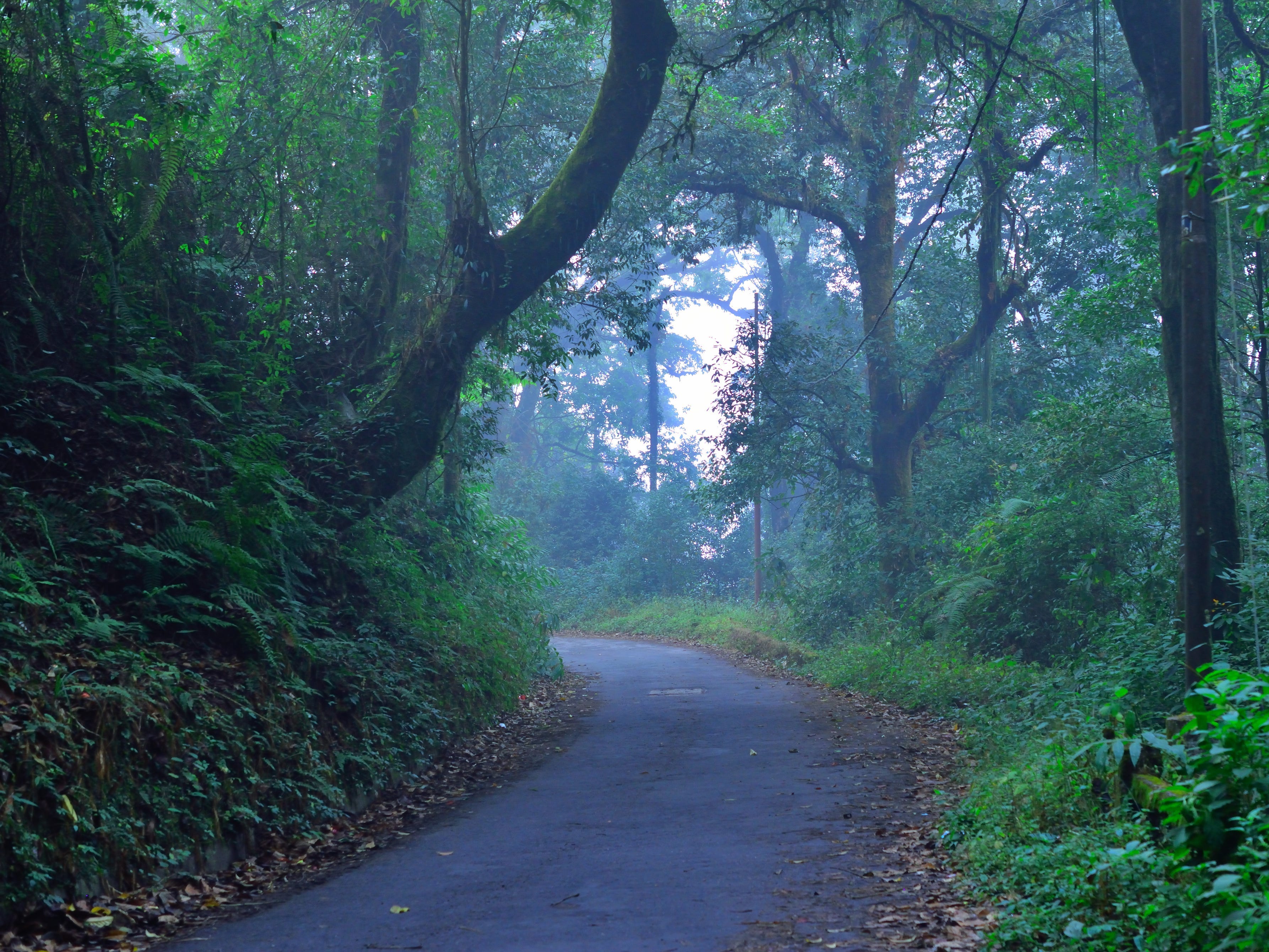 Saurav022/ShutterstockThe forest near Dow Hills Victoria Boys’ School is said to be haunted.

Forests are creepy enough in their own right.

Add some urban legends about murder victims who now roam the forest as ghosts, and you’ll never want to wander through one again.

In time for Halloween, we’ve rounded up 11 forests around the world that are thought to be haunted.

Aokigahara Forest in Japan is more commonly known as the “Suicide Forest.” 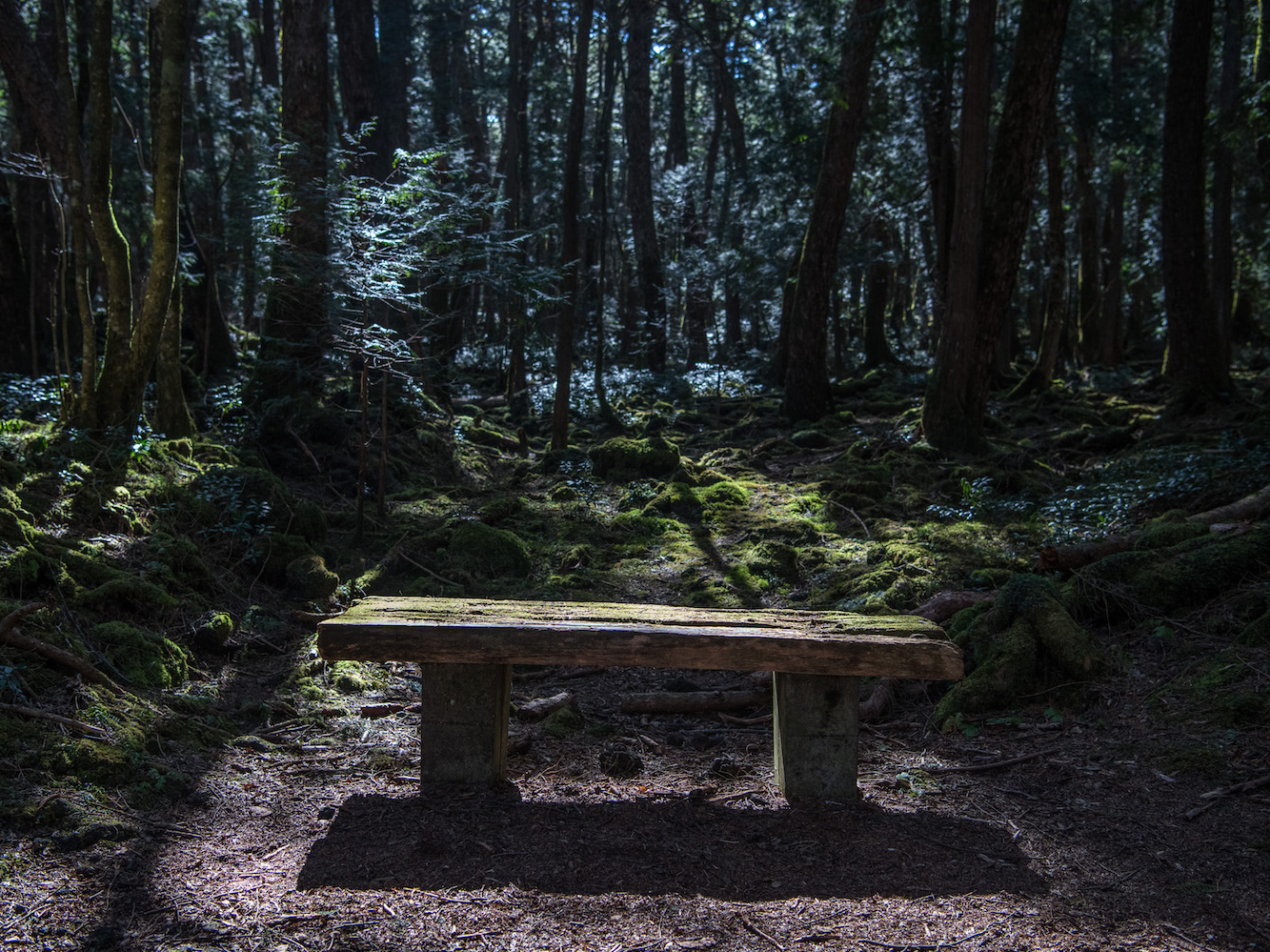 Sitting on the northwestern side of Mount Fuji, Aokigahara Forest (more commonly known as “Suicide Forest”) is the definition of tragic beauty. Sometimes referred to as the Sea of Trees, it has been the site of numerous suicides, dating all the way back to the mid-1900s.

In fact, a sign at the forest’s entrance reminds visitors that “life is a precious gift” and to reach out if they are struggling.

The reason for its reputation could have something to do with the fact that Japanese mythology has long associated the forest with demons. Plus, the tightly packed trees make it easy to get lost and even hear, providing an exceptionally isolated destination.

Spiritualists in the country say Aokigahara is a hotbed of paranormal activity. But even if you don’t believe in ghosts, you’re likely to get spooked by the everyday items that litter the forest floor.

Isla de las Munecas, or “The Island of Dolls,” in Mexico is reportedly haunted by the spirit of a young girl who drowned there. 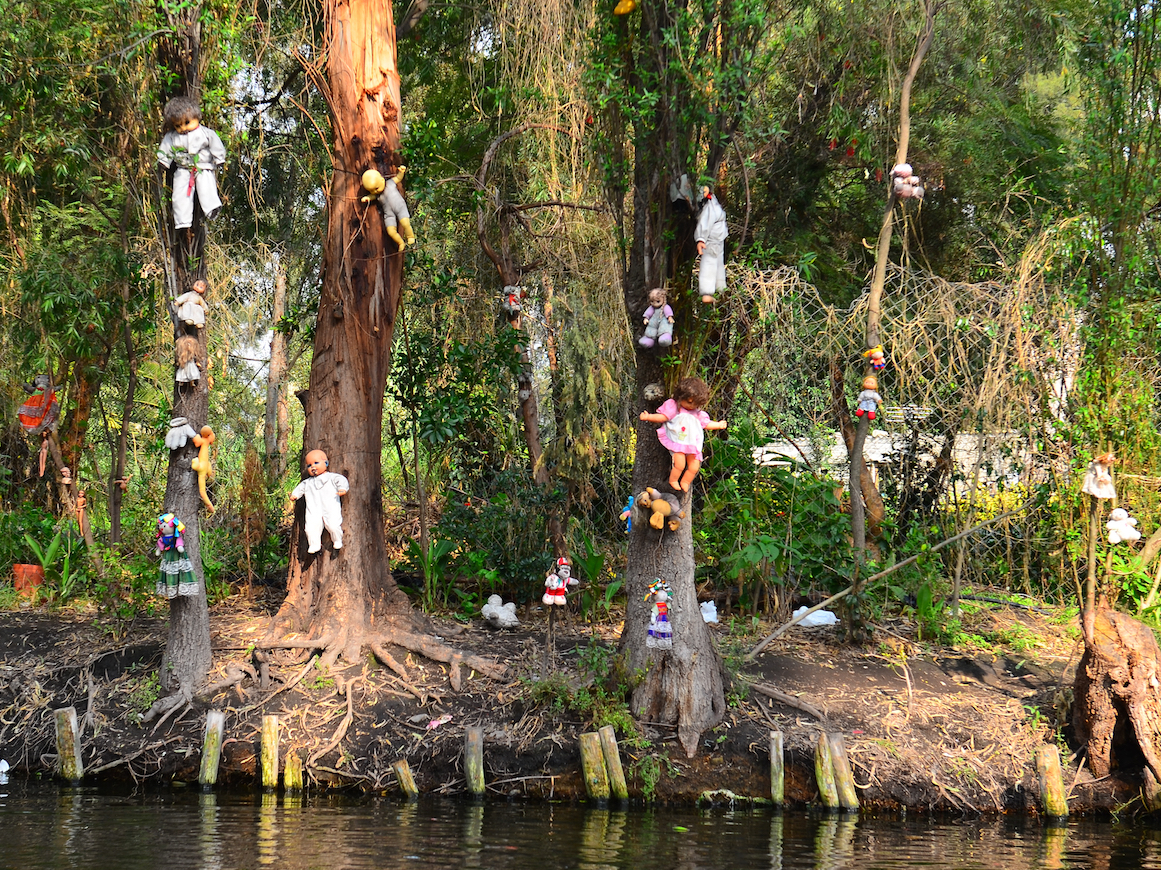 As if forests weren’t scary enough on their own, this one located along the canals of Xochimico, near Mexico City, is covered in dolls that hang from the trees. Local legend has it that the island’s caretaker hung the first doll to honour a little girl that he had found drowned on the island (the doll was thought to be hers).

The caretaker then felt as if he was being haunted by the girl’s spirit, so he continued to string up dolls in hopes of appeasing her. Fifty years and plenty of dolls later, he reportedly drowned in the same spot the girl did.

Today, the island has become a popular tourist destination. Visitors claim that the dolls move their eyes, heads, and limbs, and that they’re possessed by spirits.

Hoia Baciu Forest in Romania has a spooky clearing where nothing has ever grown. 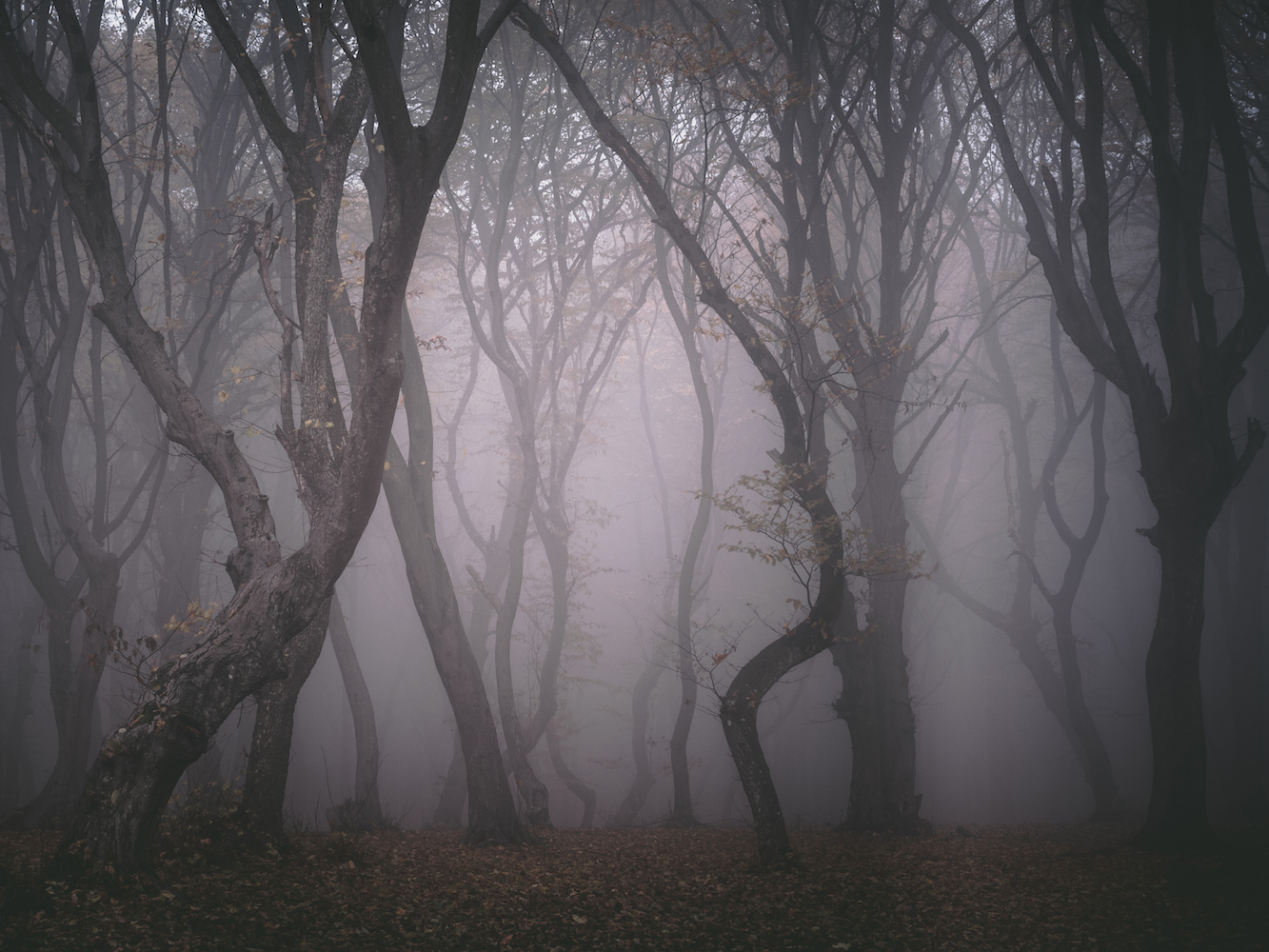 It seems fitting that a haunted forest in Romania would be located near the unofficial capital of the country’s Transylvania region – Cluj-Napoca. Hoia Baciu was first recognised for being haunted when a military technician photographed what he claimed was a UFO that appeared in a part of the forest known as “the clearing” in 1968.

The clearing has stumped visitors, locals, and even scientists for decades. It’s a spot where nothing grows and nothing has ever grown, according to official records. What’s even weirder though, is that the trees that do grow in the forest grow in odd patterns – zig zags and spirals that no one has ever been able to explain.

Brave tourists can tour the forest at night, though many have reported feeling an odd sense of anxiety or nausea, or the feeling of being watched.

The creepy Black Forest in Germany inspired stories written by the Brothers Grimm. 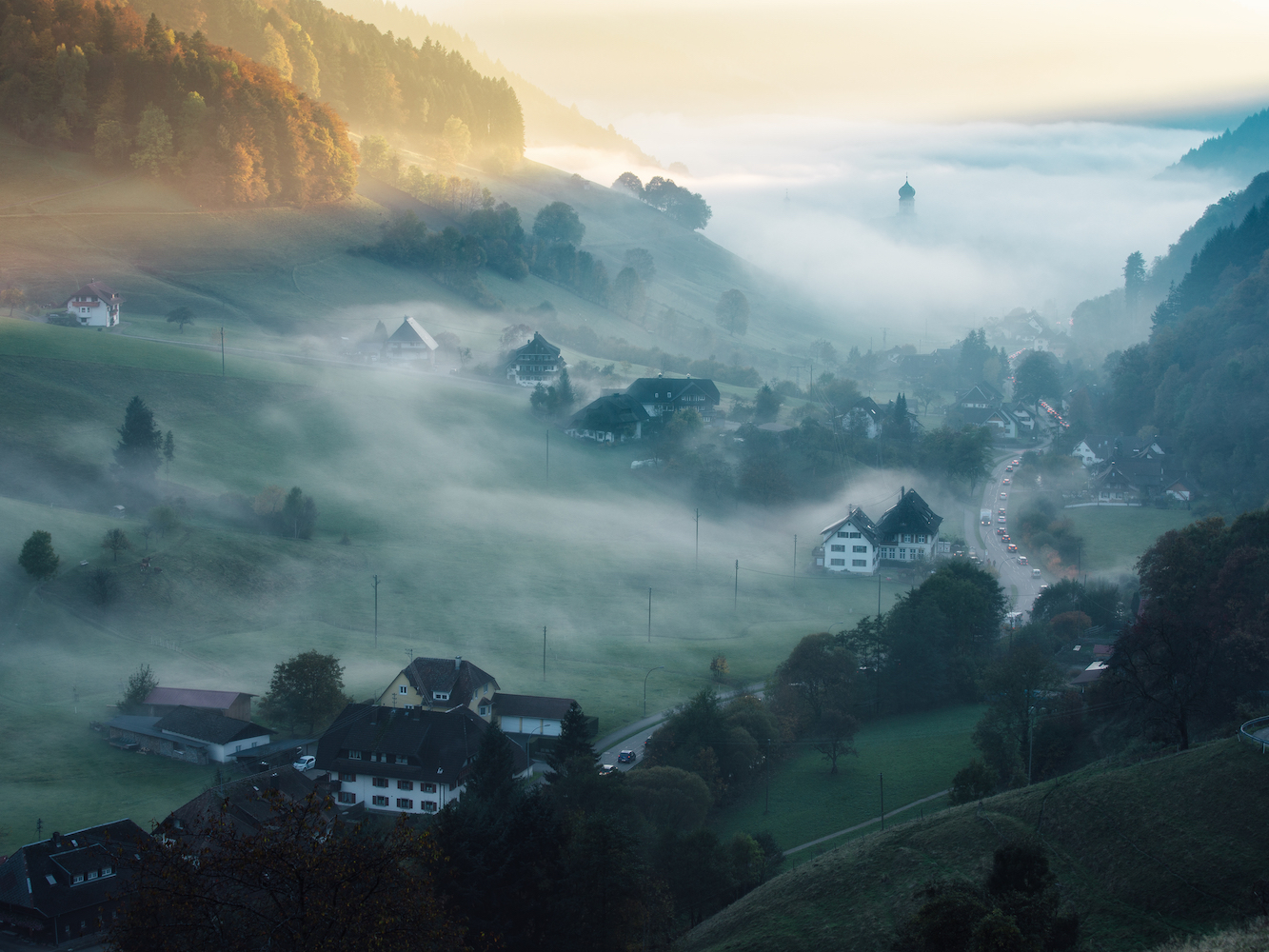 The name of this forest already sounds ominous, but the Brothers Grimm solidified its haunted reputation by using it as the setting for many of their fairy tales, like Hansel and Gretel.

Nestled in southwestern Germany and bordered by the Rhine River, the Black Forest’s tall evergreens are as beautiful as they are sinister, and said to be home to paranormal creatures ranging from witches to werewolves.

The region is known for the unique way in which its people celebrate carnival – by dressing up like witches, demons, and scary spirits and animals.

Wychwood Forest in Oxfordshire, England, has been the site of multiple ghost sightings. 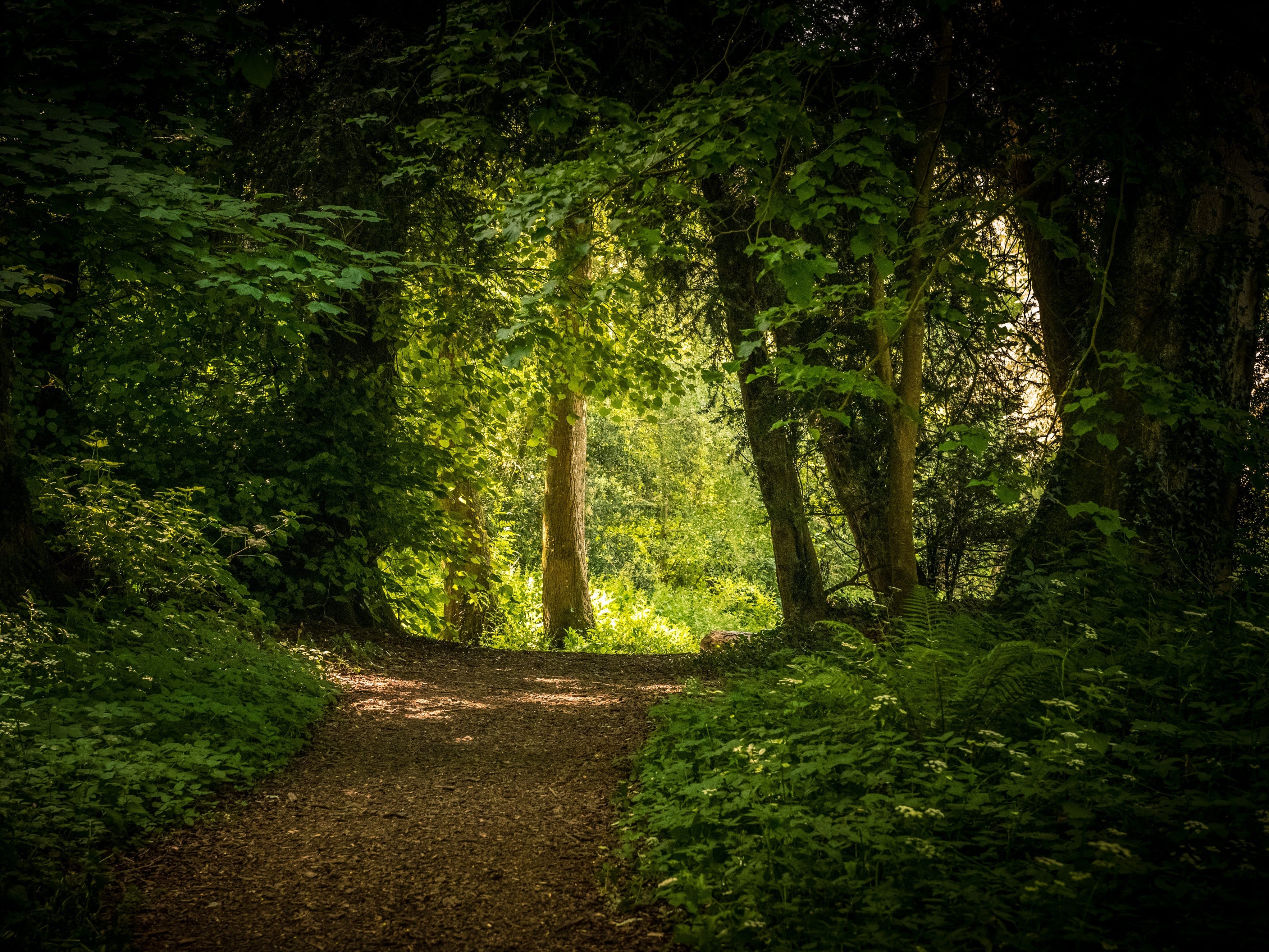 Although there’s no one historic event that confirms the fact that Wychwood is haunted, those who have stepped inside the former royal hunting ground have claimed to see some pretty hair-raising stuff, from the apparitions of crying children in a horse-drawn carriage to the touch of a random hand.

Then there’s the story of the ghost of Amy Robsart, the wife of the Earl of Leicester. After Amy mysteriously died of a broken neck, her husband is said to have come across her ghost while hunting in the forest. The ghost told him that he would be dead within 10 days … and he was. Now, legend has it that her ghost has the same effect on all who come across it in the forest to this day. 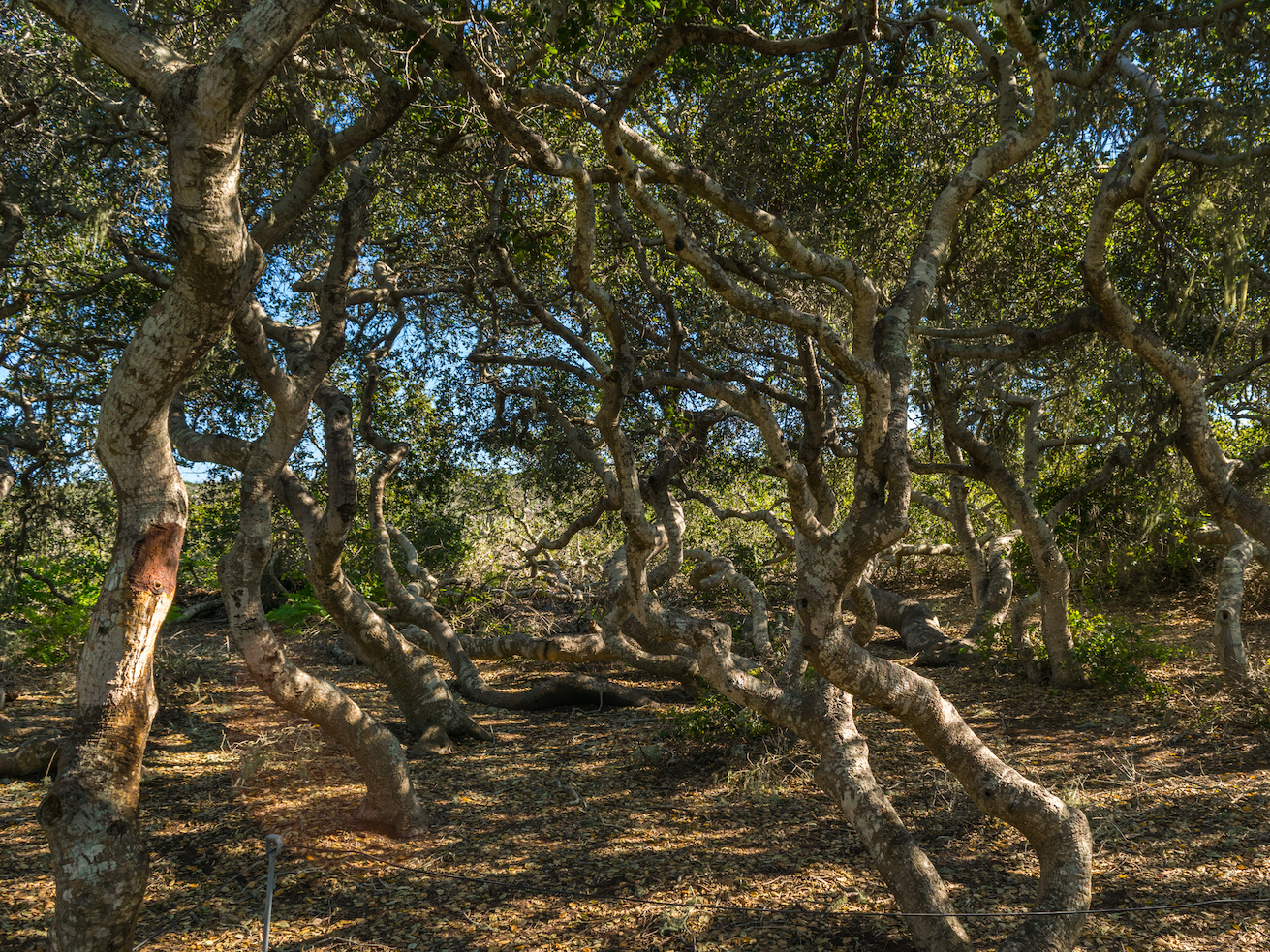 Some call this forest one of the most haunted regions in California. Located in Escondido, near San Diego, the forest is believed to have once been home to Native American tribes, as evidenced by a number of artifacts that have been found there. It was also the sight of a now-abandoned insane asylum.

But the most common story you’ll hear about the forest goes something like this: Gypsies living there in the early 1800s were chased out and even murdered by townspeople, causing the remaining gypsies to curse the forest. Ever since then, hikers and visitors have reported sightings of a ghostly woman in a white dress, bleeding trees, and a spirit riding a horse. 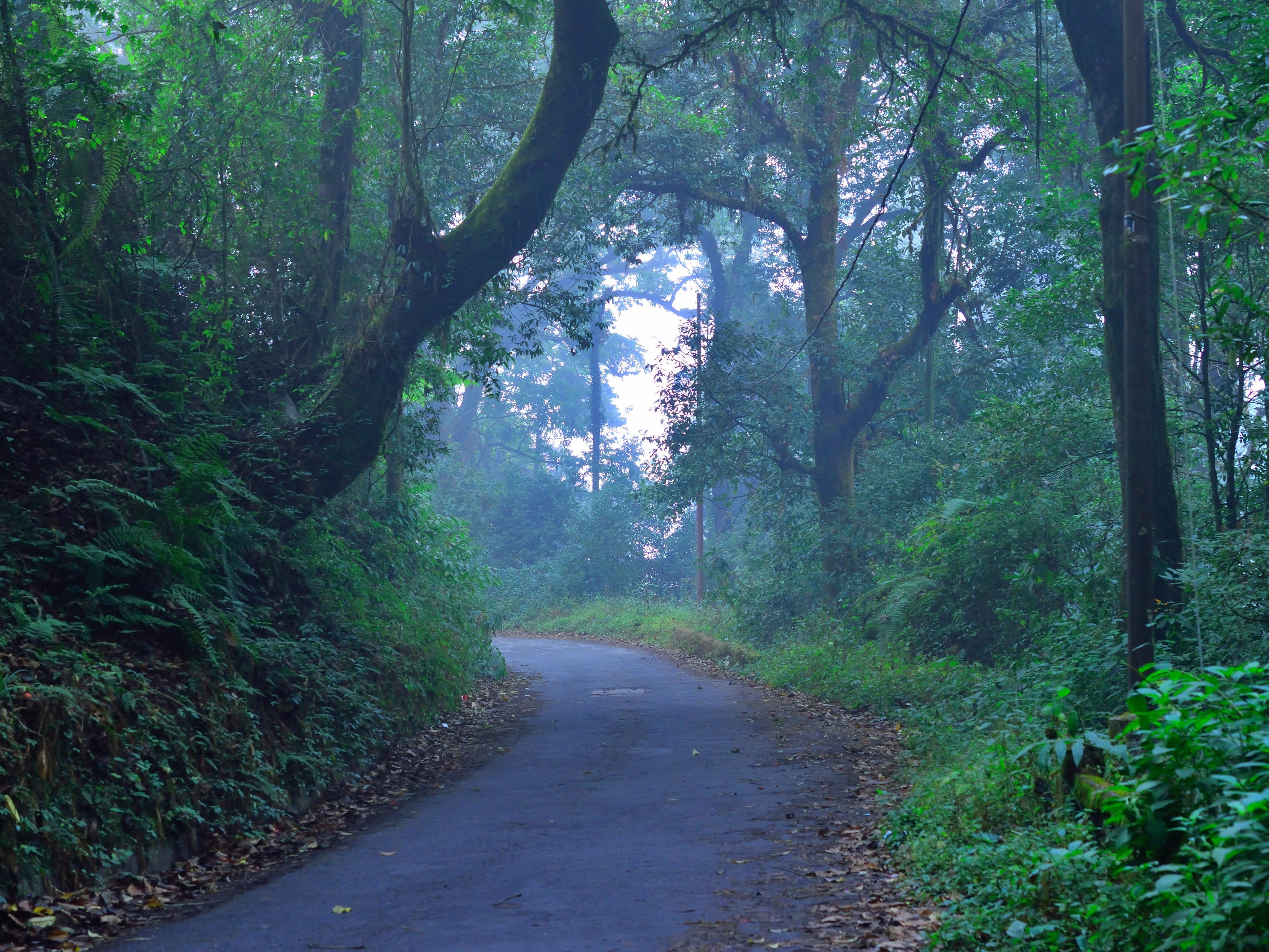 Dow Hill Forest surrounds the Dow Hills Victoria Boys’ School, which is said to be one of the most haunted places in India. While the school’s hallways are said to be filled with the sound of footsteps even when it’s closed for vacation, the forest is even creepier. Rumour has it that it has seen multiple murders, and woodcutters have reported sightings of a decapitated boy walking along Death Road, the path that stretches between the school and forest.

Pine Barrens, New Jersey, is said to be the home of the infamous “Jersey Devil.” 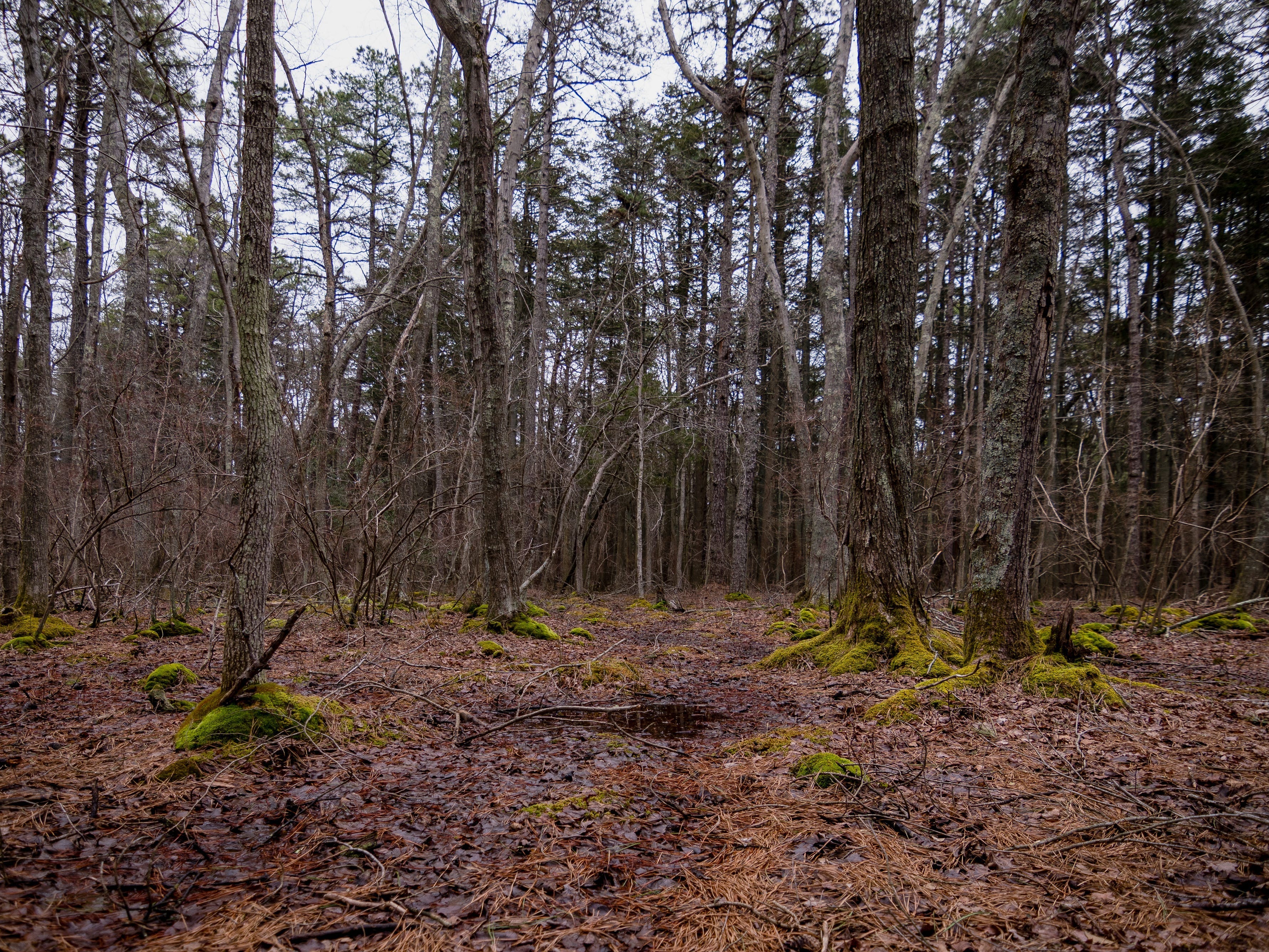 Pine Barrens spans seven counties and contains ghost stories galore. During the colonial era, the area was bustling with sawmills, paper mills, and towns to accompany them, but they were all abandoned when coal was discovered in Pennsylvania, leaving eerie ghost towns in their wake.

The forest is also said to be home to the infamous Jersey Devil, a beast that the Pinelands Preservation Alliance describes as “a kangaroo-like creature with the face of a horse, the head of a dog, bat-like wings, horns, and a tail.” According to folklore, it was the 13th child of a woman named Deborah Leeds, who offered it to the devil while pregnant with it in 1735. Upon its birth, the newborn sprouted talons, hooves, and wings, and killed its mother, siblings, and the midwife before disappearing. Sightings persist today, as it continues to terrorize livestock (and humans).

Epping Forest, England, is rumoured to be haunted by murder victims and even deceased soldiers. 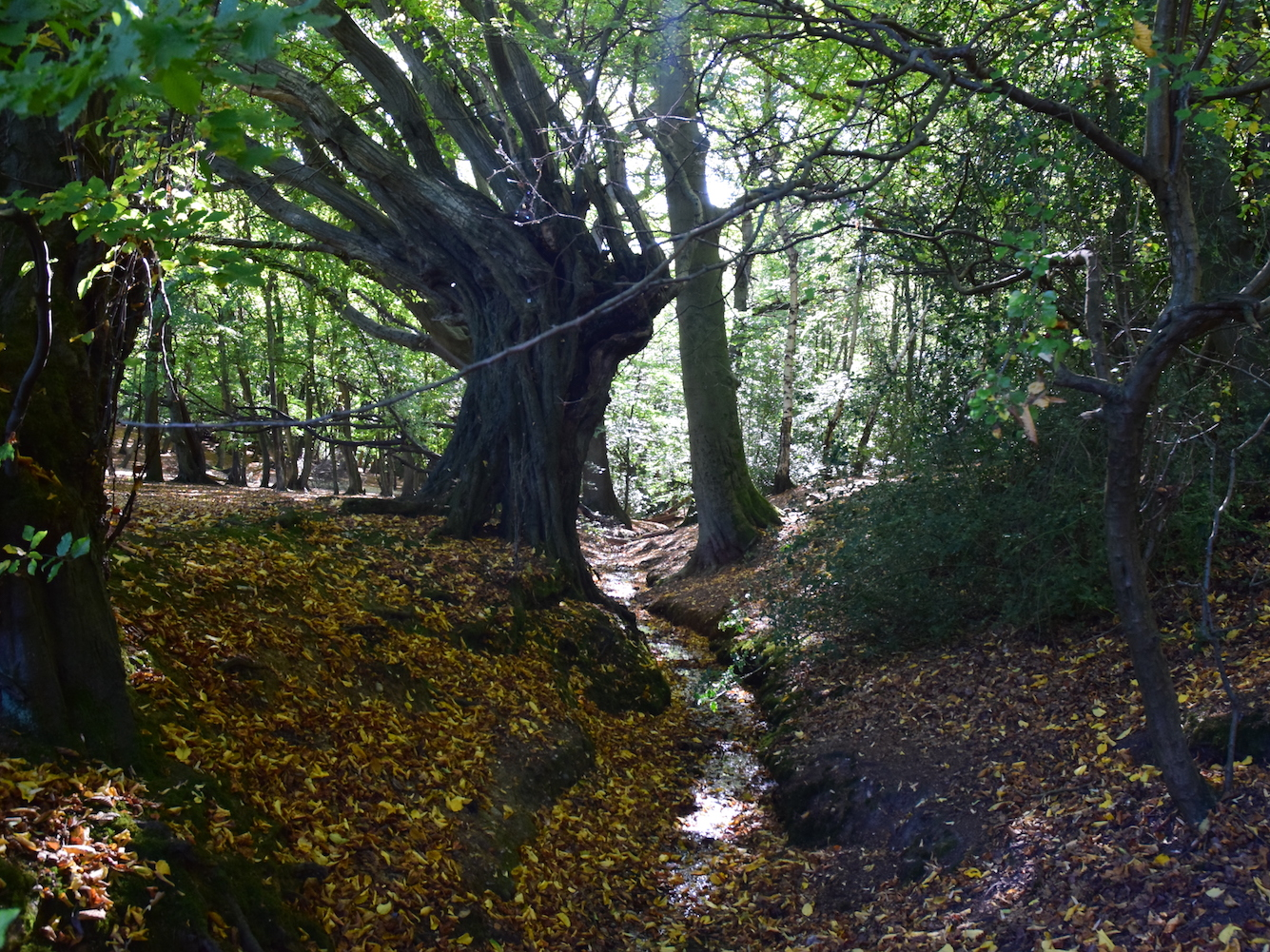 Epping Forest is probably best known as the site of at least one of the murders committed by highwayman Richard Turpin back in the 18th century. The expansive forest, which stretches for over 9 square miles, is covered with thick trees that haven’t been cut in over 100 years, due to the Epping Forest Act of 1878.

If the trees aren’t enough to spook you, chances are the ghosts, spirits, or muffled drum noises of deceased soldiers that visitors have reported will do the trick. Plus, cars parked on nearby Hangman’s Hill are said to roll uphill when parked in neutral. 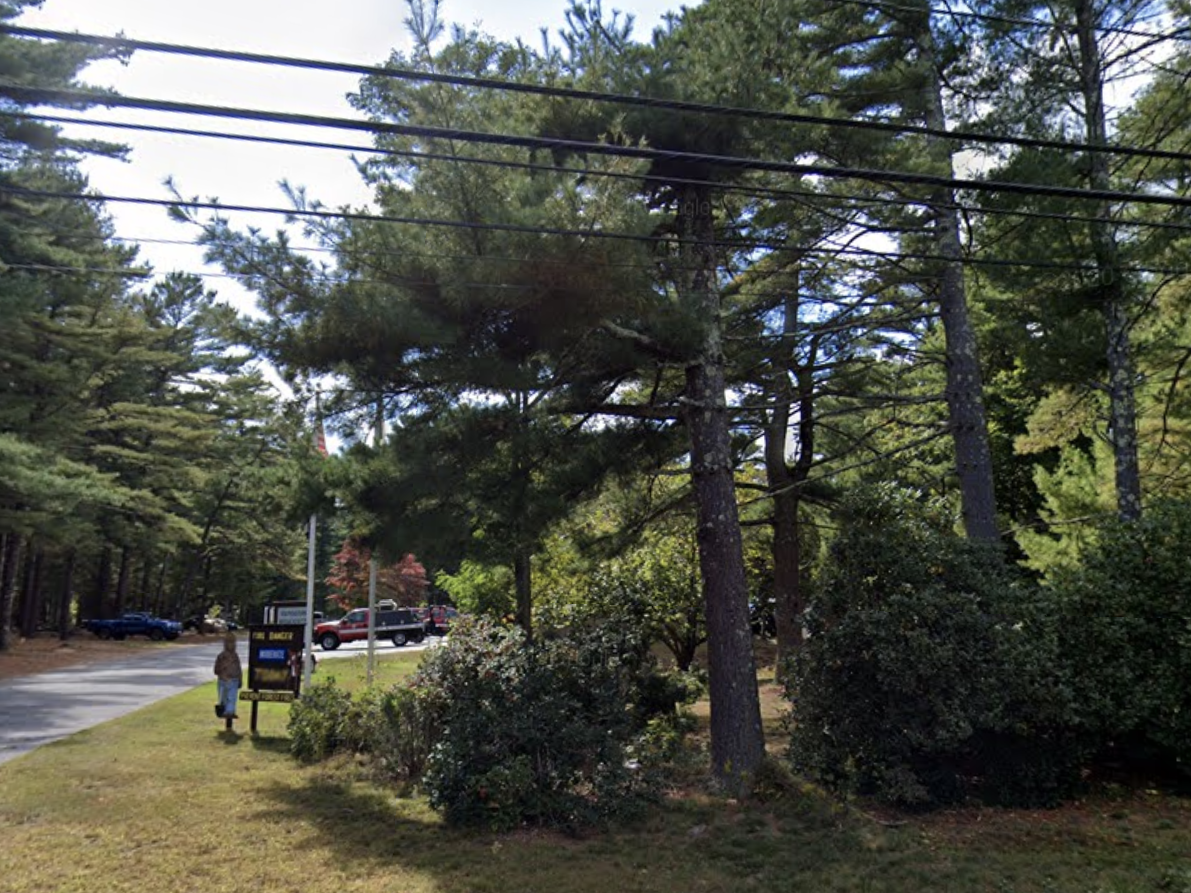 In September 1978, 15-year-old cheerleader Mary Lou Arruda was abducted while riding her bike. In November, her body was found tied to a tree in the state forest. James Kater, Mary Lou’s kidnapper and murderer, was finally convicted in 1996. He died in 2016 at the age of 68 while serving a life sentence.

Other murders have also been linked to the forest and, according to some reports, individuals have even witnessed satanic cult activity in the woods.

A ghost ship has reportedly been spotted multiple times near Old House Woods in Mathews, Virginia. 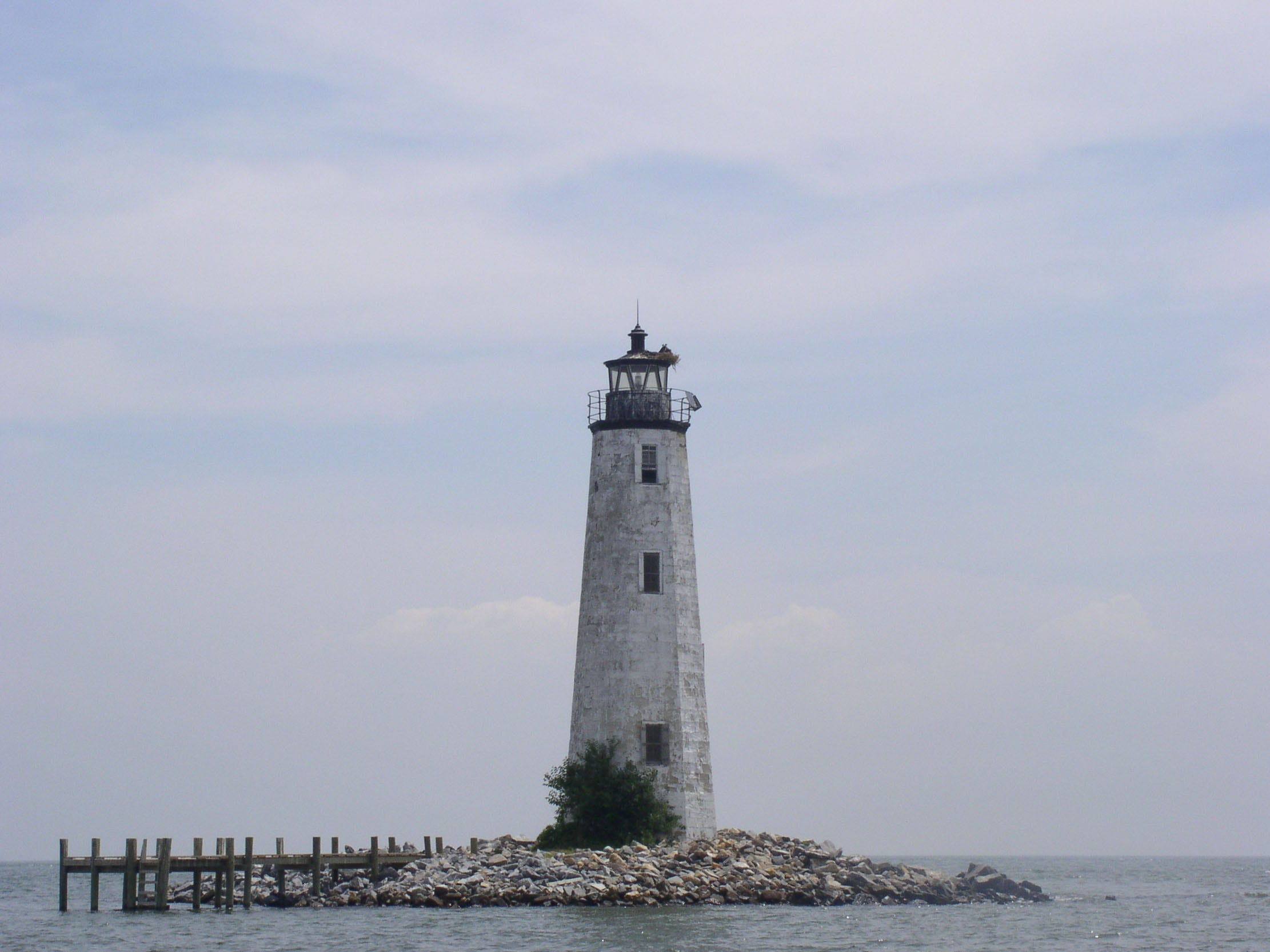 In the late 19th century, a fisherman reportedly saw a large pirate ship suddenly appear in Whites Creek. Shortly after the ghost ship appeared, it reportedly sailed onto the shore and into the forest, where “shadowy” crew members could be seen climbing down a rope and into the woods.

An abandoned home near the forest, known as the Frannie Knight house, was reportedly haunted as far back as the Civil War. Local legend says that the home set itself on fire before putting itself out. The home then caught fire again before burning to the ground.