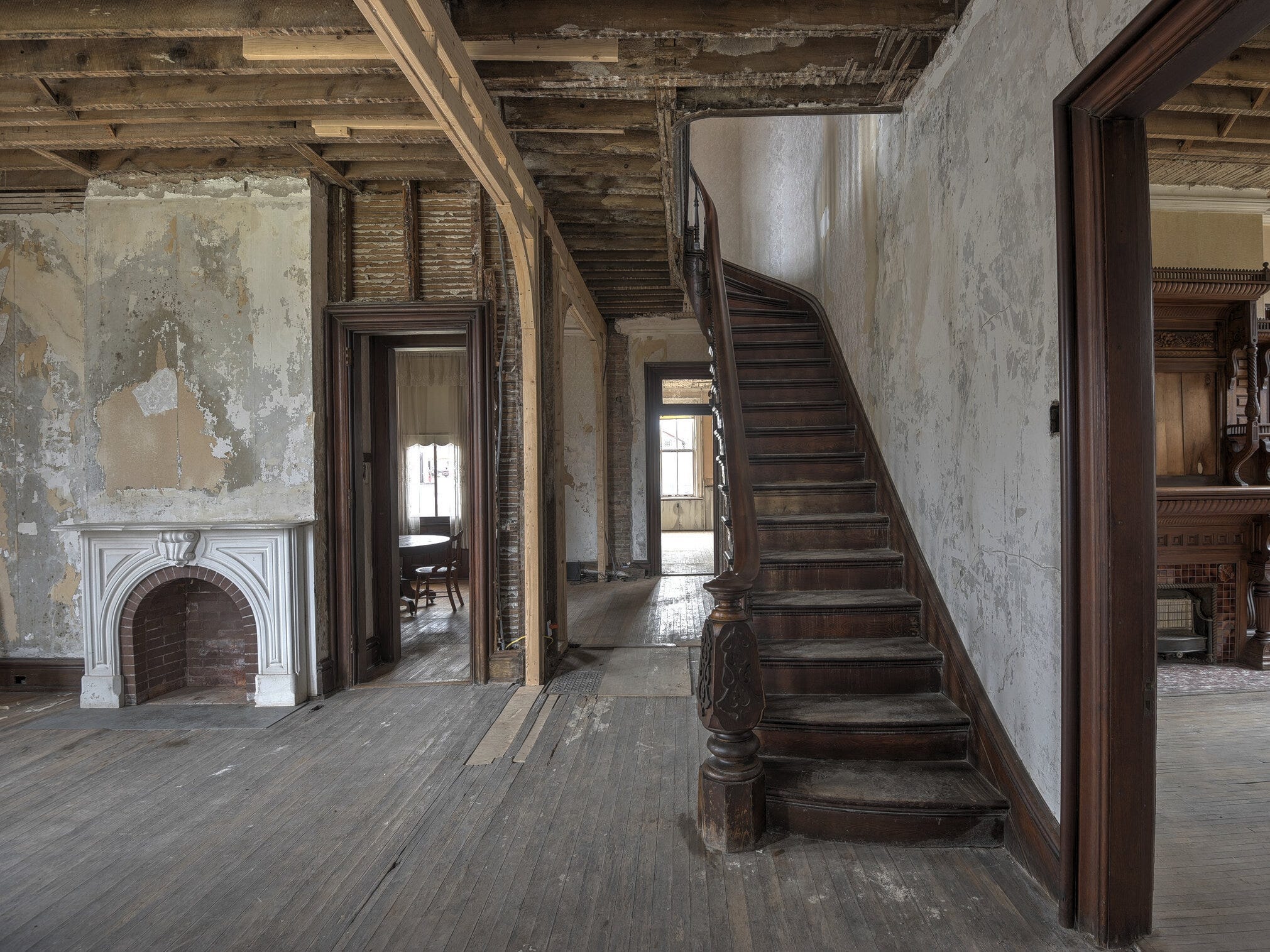 Michael DeRosa Exchange, LLCToday, the mansion is a shell of its former grandeur.

A haunted mansion in upstate New York just sold â€” and on Halloween, of all nights.

Known around town as The Castle, this abandoned mansion looks straight out of a horror movie. However, many of the home’s grand features are still intact, from its four fireplaces to the ornate wooden staircase.

The historic mansion was auctioned off last month. Realtor Michael DeRosa accepted bids starting at $US25,000, and bidding closed on Halloween night. The final purchase price was $US368,500.

Here’s a look inside this haunted mansion with an eerie history.

The mansion was built in 1871 by Scottish immigrant Samuel Laurie. 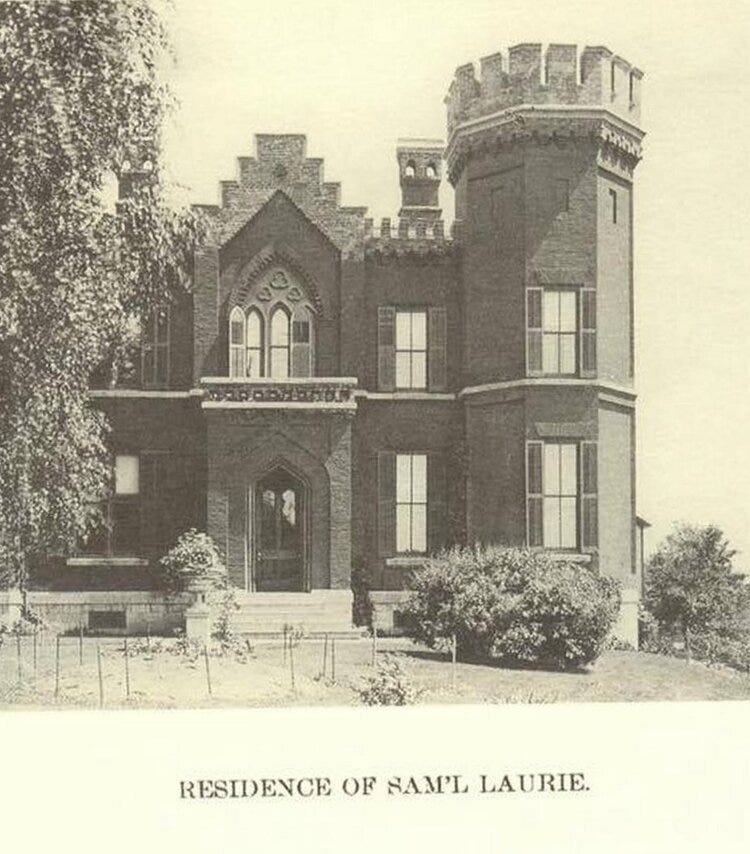 According to the home’s listing, Laurie moved to the United States as a young man to pursue a career in the developing wool industry. By 1868, he had gained a good reputation in the industry and became superintendent of a mill in Rhode Island.

In 1868, Samuel Laurie and his wife moved to Auburn, New York, where he reviewed the local woolen mill’s operations. 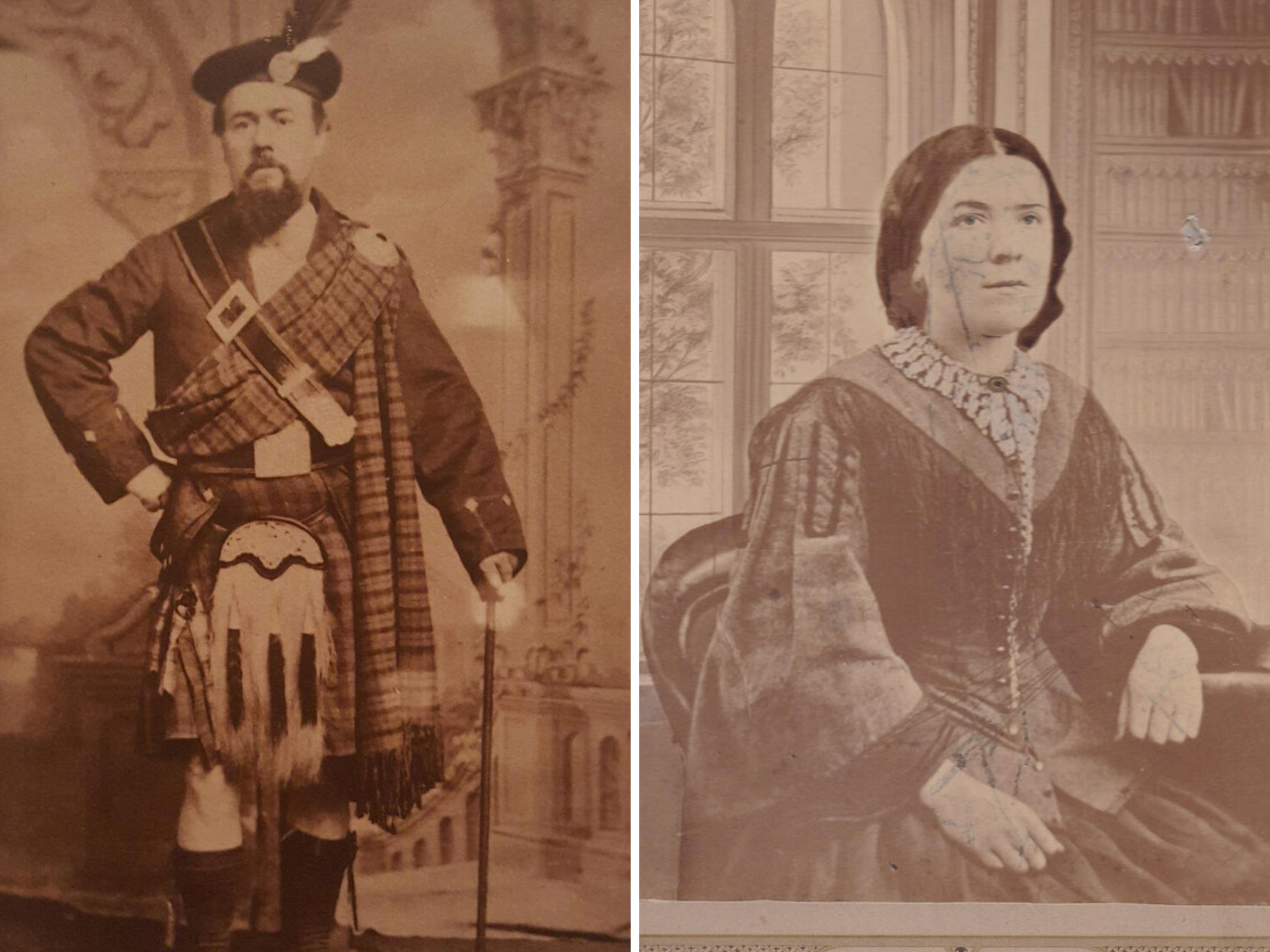 He was convinced to take over the mill, which thrived under his leadership.

Plans were then drawn up to build the couple a residence overlooking the factory. 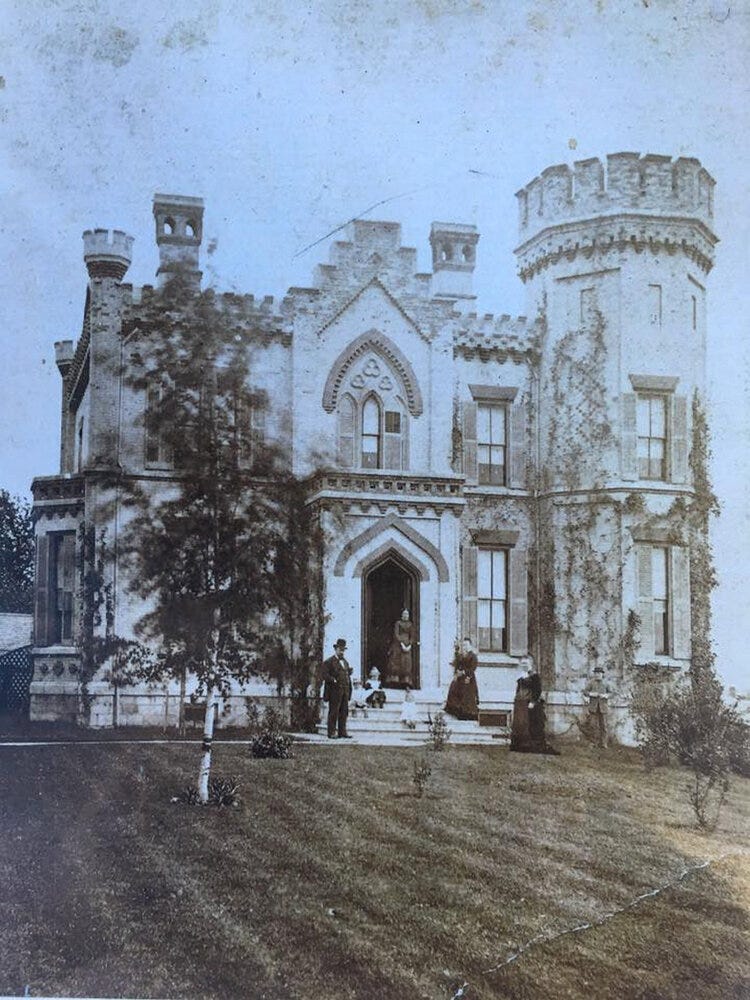 Nicknamed “The Castle,” the home was designed by Nelson Hamblin. Stockholders spent $US7,000 to build the grand home on Owasco Street.

A local mason and two carpenters worked on the ambitious project. In March 1881, an addition was built onto the mansion to improve The Castle’s symmetry from the outside. 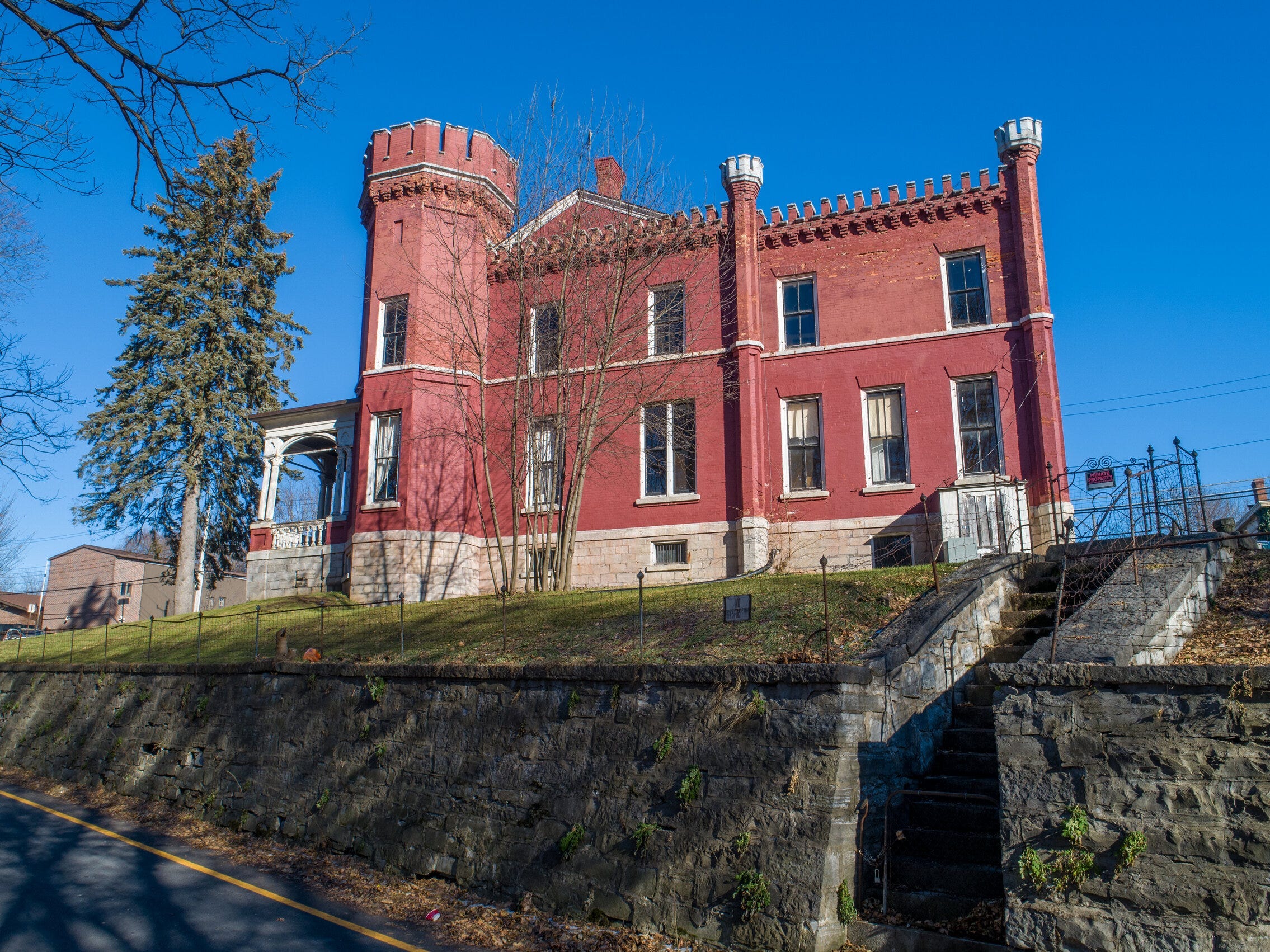 According to New York Upstate, the Lauries had 10 children – three of them died as infants.

On August 6, 1890, Laurie’s wife, Jeanie “Jane” McAllister, died at the residence after suffering months of complications related to a case of the grip, an illness similar to influenza. Her funeral took place at The Castle and was attended by “throngs of mourners,” according to the home’s listing.

In 1893, the economy crashed and Samuel Laurie lost his interests in the Auburn Woolen and Canoga mills. He also lost his home on Owasco Street.

Samuel Laurie died on April 25, 1895, in Mountain Valley Springs, Arkansas. After his passing, his remains were returned to Auburn and his funeral was held at The Castle. Laurie was laid to rest in Fort Hill Cemetery alongside his wife, Jane.

Today, the mansion is a shell of its former grandeur.

The home has six bedrooms and space for a library, games room, and music room. 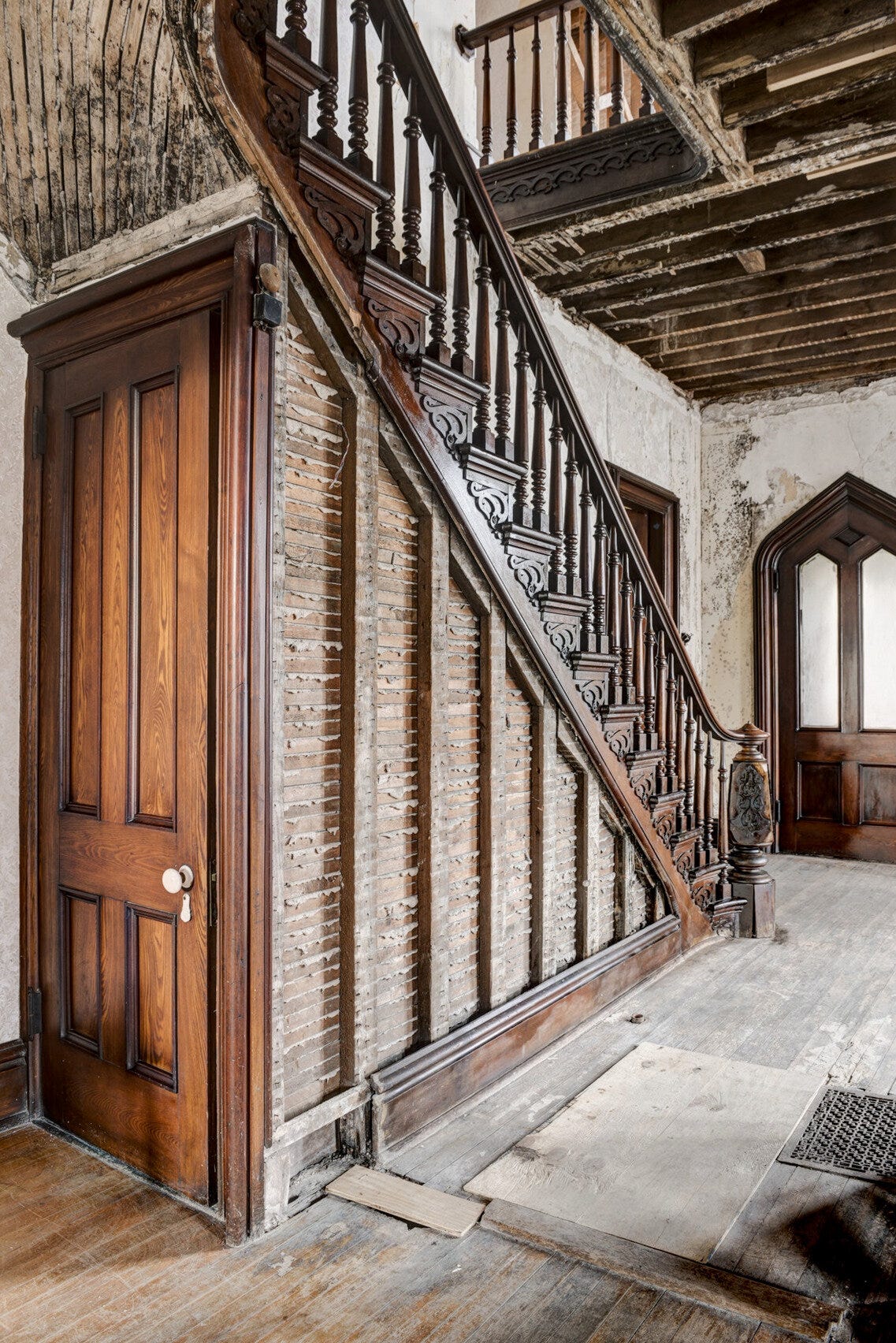 Though much of the paint has peeled after years of apparent neglect, many of the home’s original features are still intact.

The mansion has multiple stained-glass windows. 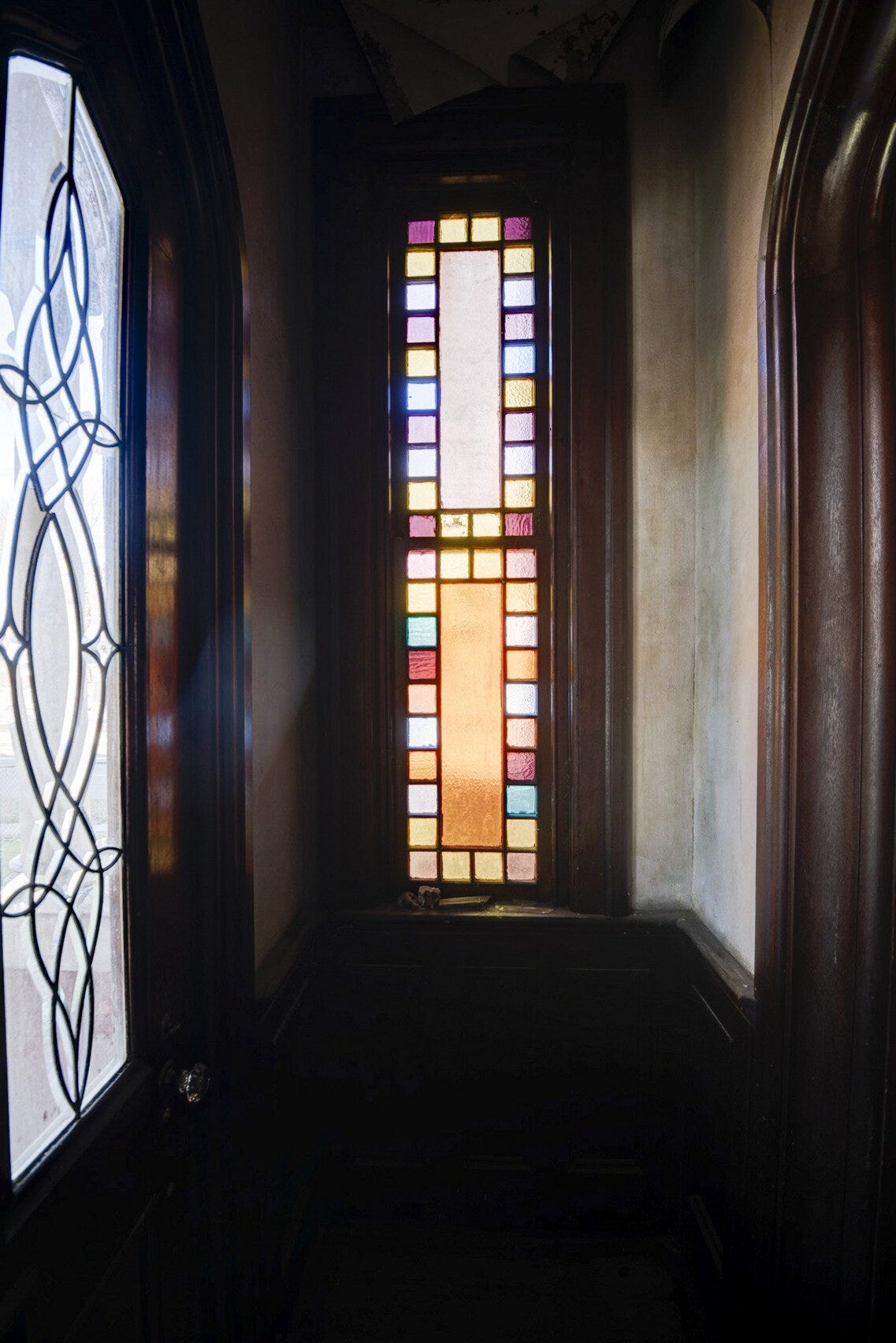 The Castle’s windows add to the home’s spooky atmosphere.

Intricate carvings on the mansion’s grand staircase and fireplaces are just a few of the home’s historic features. 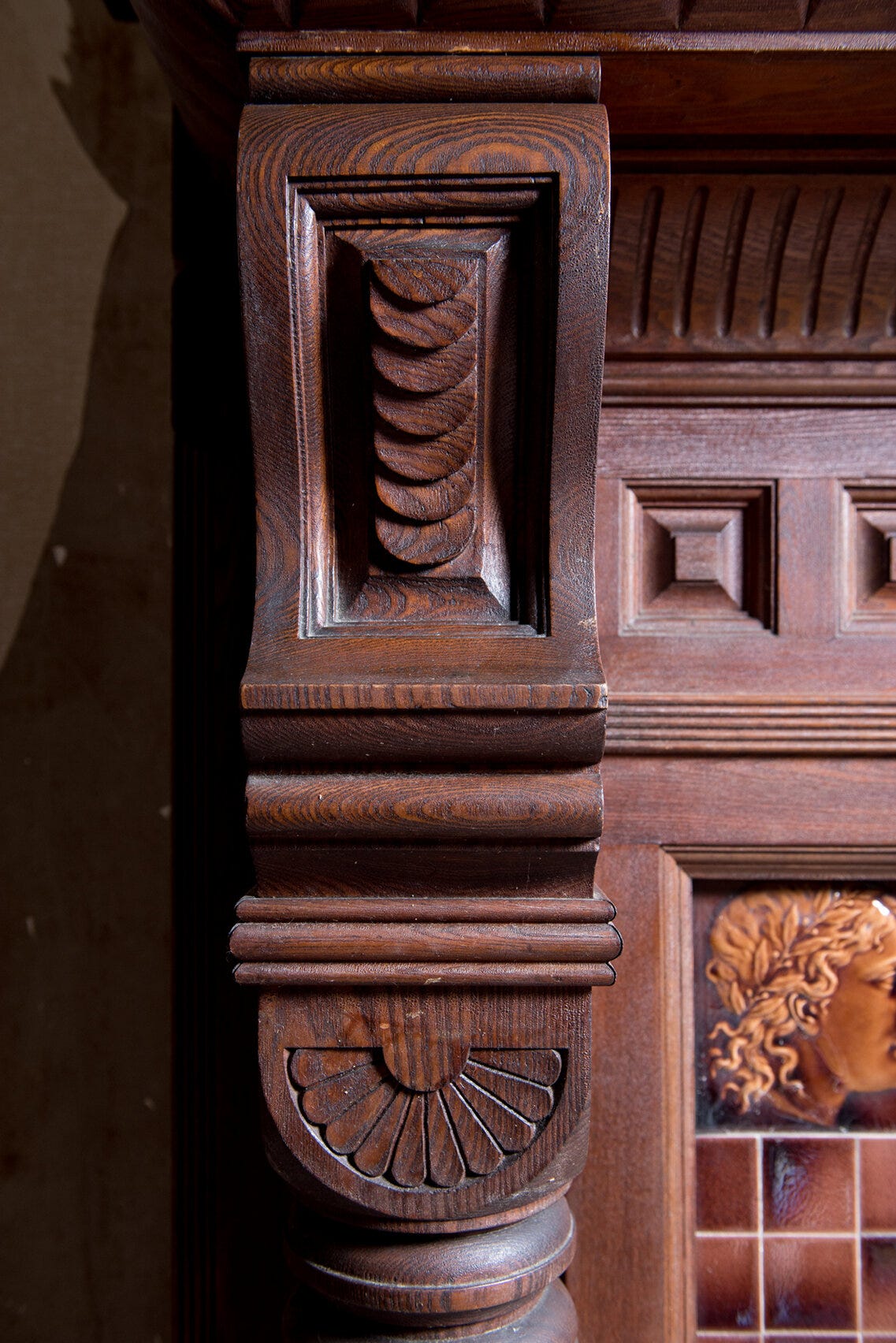 Michael DeRosa Exchange, LLCOrnate carvings on one of the fireplaces.

The mansion has four fireplaces in total.

None of the former owners of The Castle altered the house from its original design. 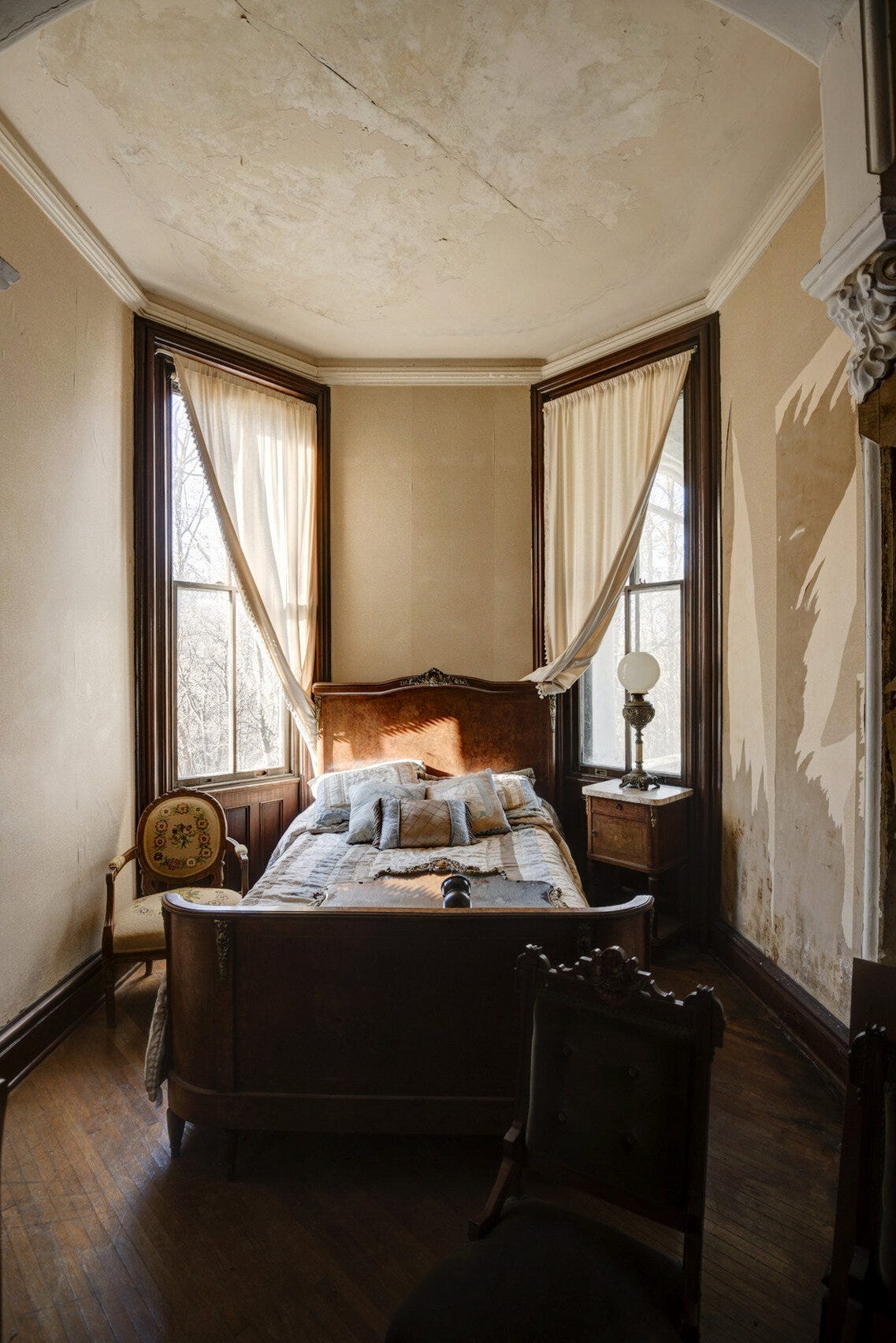 All of the original woodwork, built-in bookcases, doors, and 12-foot ceilings are still there, according to New York Upstate.

The home’s original butler sink is also still there. 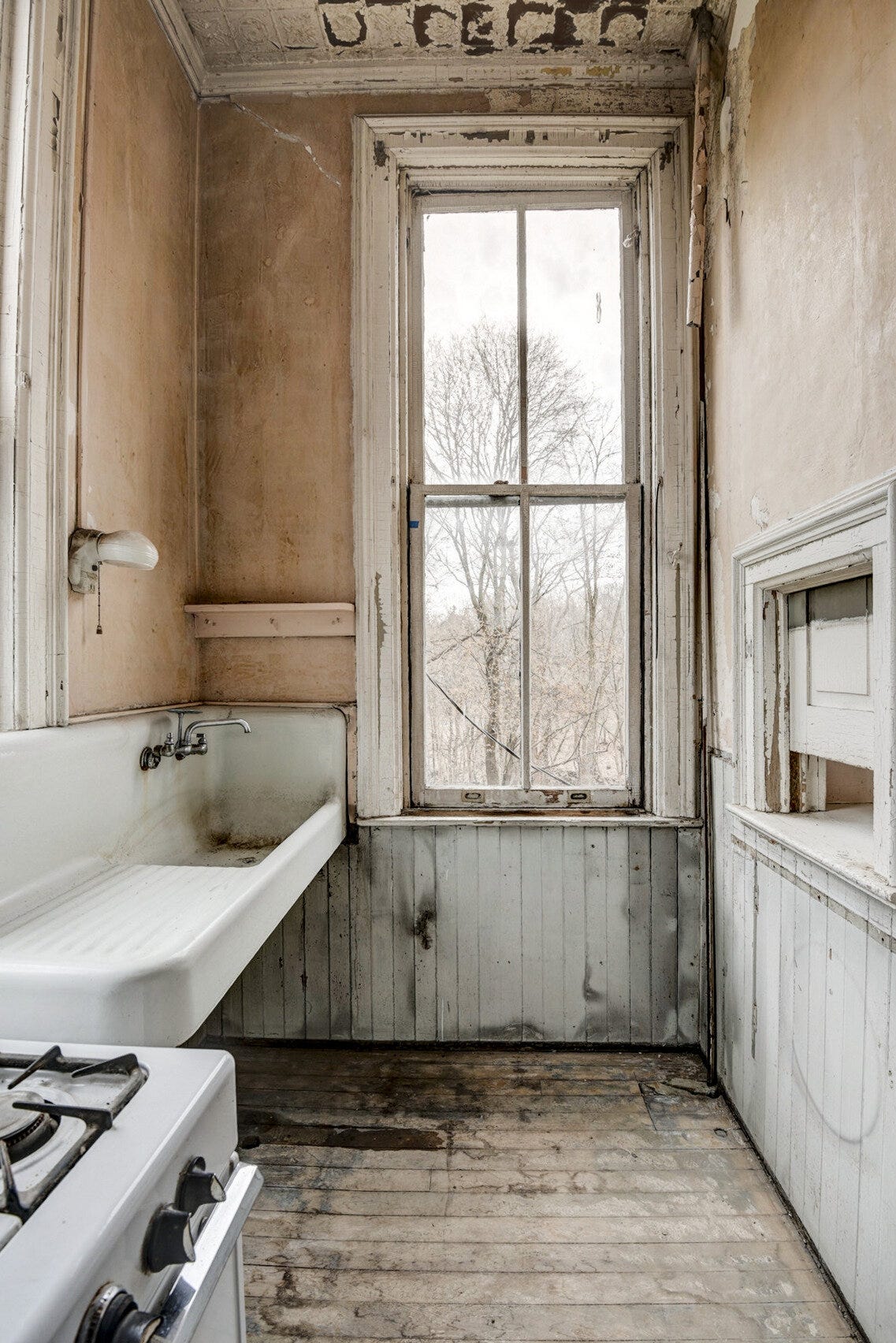 Much of the mansion’s flooring and paint is still intact, but will likely need to be restored.

Judging by the eerie remnants left behind by the home’s previous owners, it’s no surprise that some have speculated the mansion is haunted. 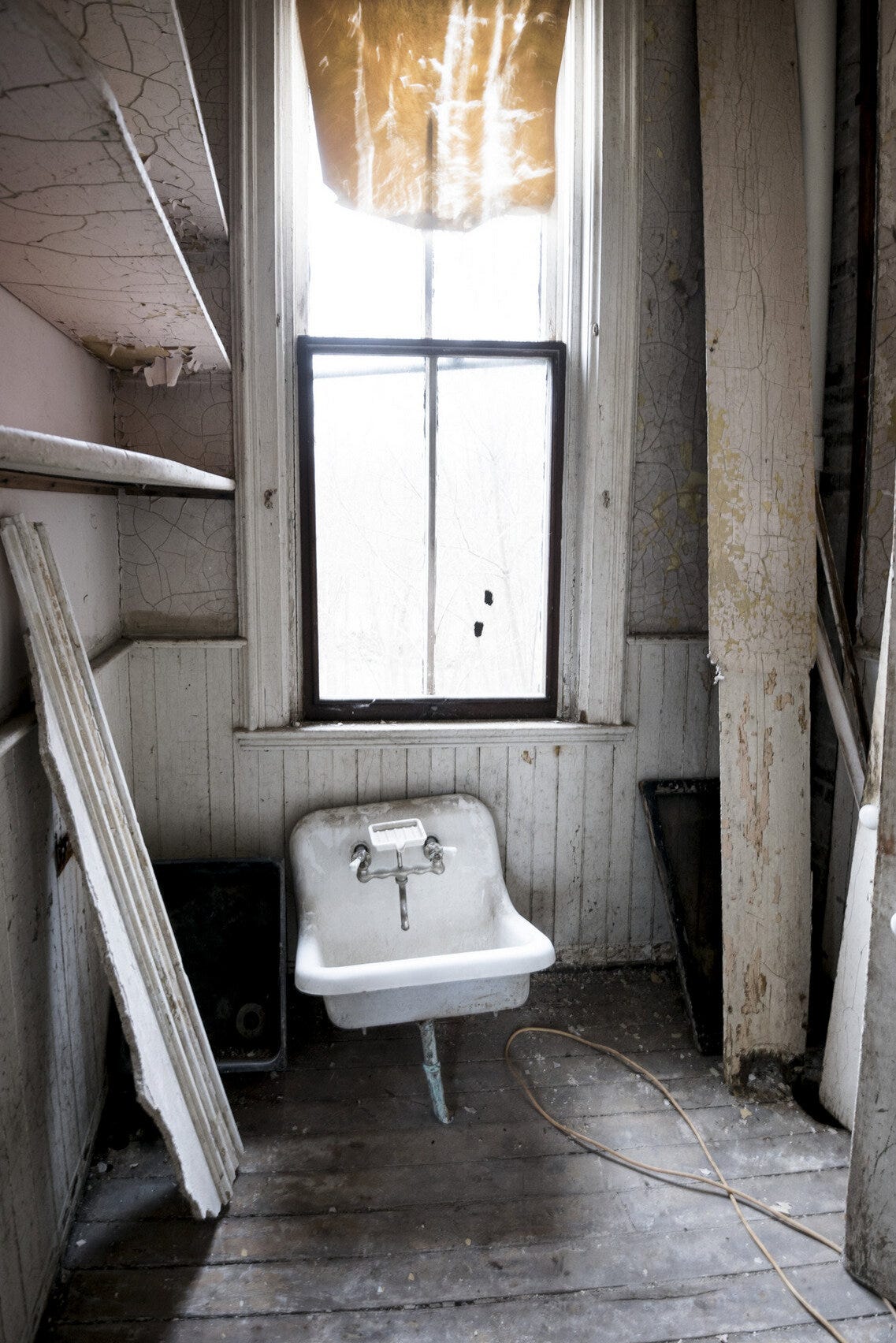 Prior to listing the property, real estate agent Michael DeRosa hired the paranormal research group Soul Searchers to investigate the property and see if any former occupants were still hanging around.

Ghost hunters initially set out to prove the mansion wasn’t haunted. However, the team reportedly ended up finding evidence of paranormal activity. 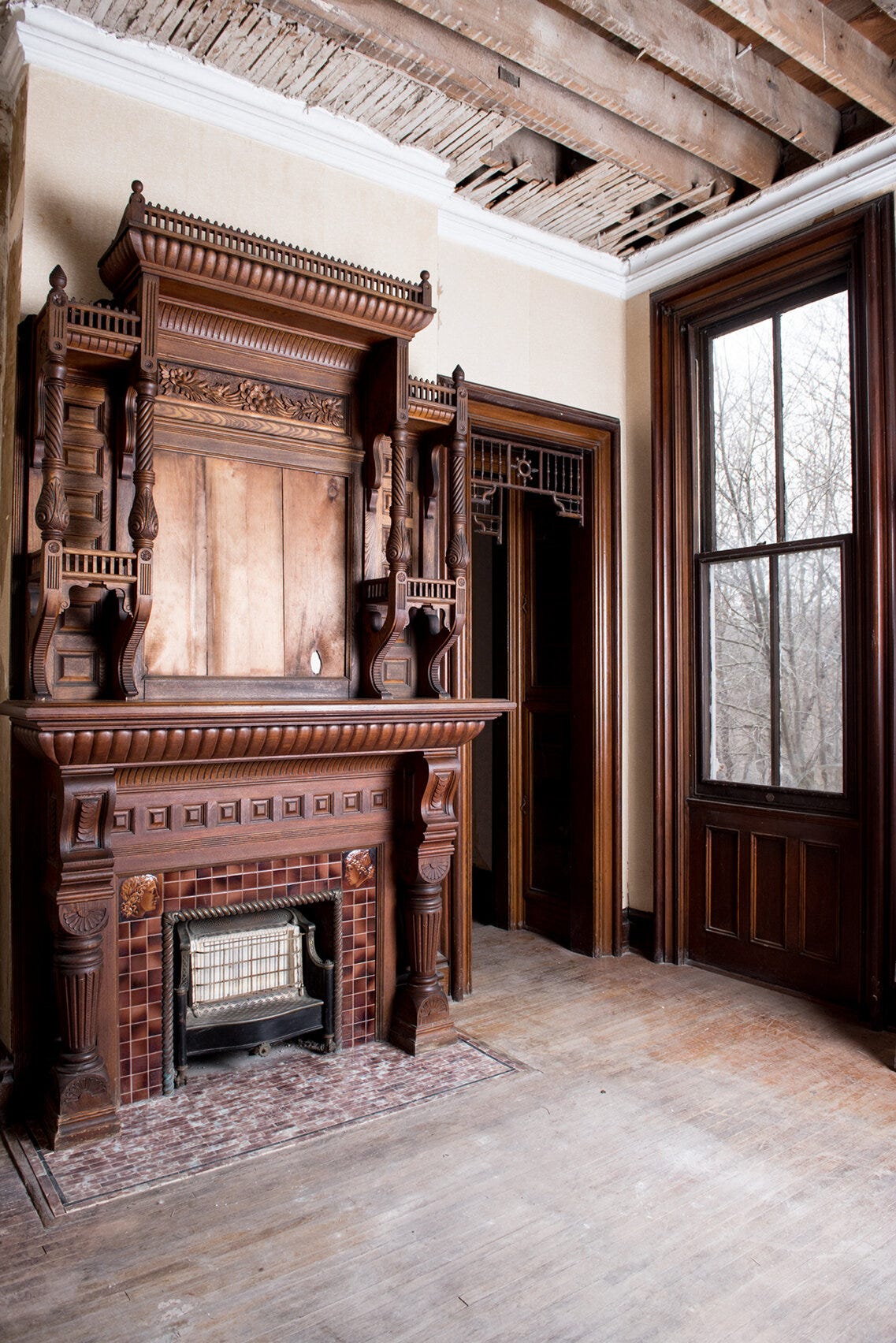 They took footage of their investigation.

“I’ve seen things that would make you not want to sleep at night,” one of the investigators was heard saying in a video included in the home’s listing. 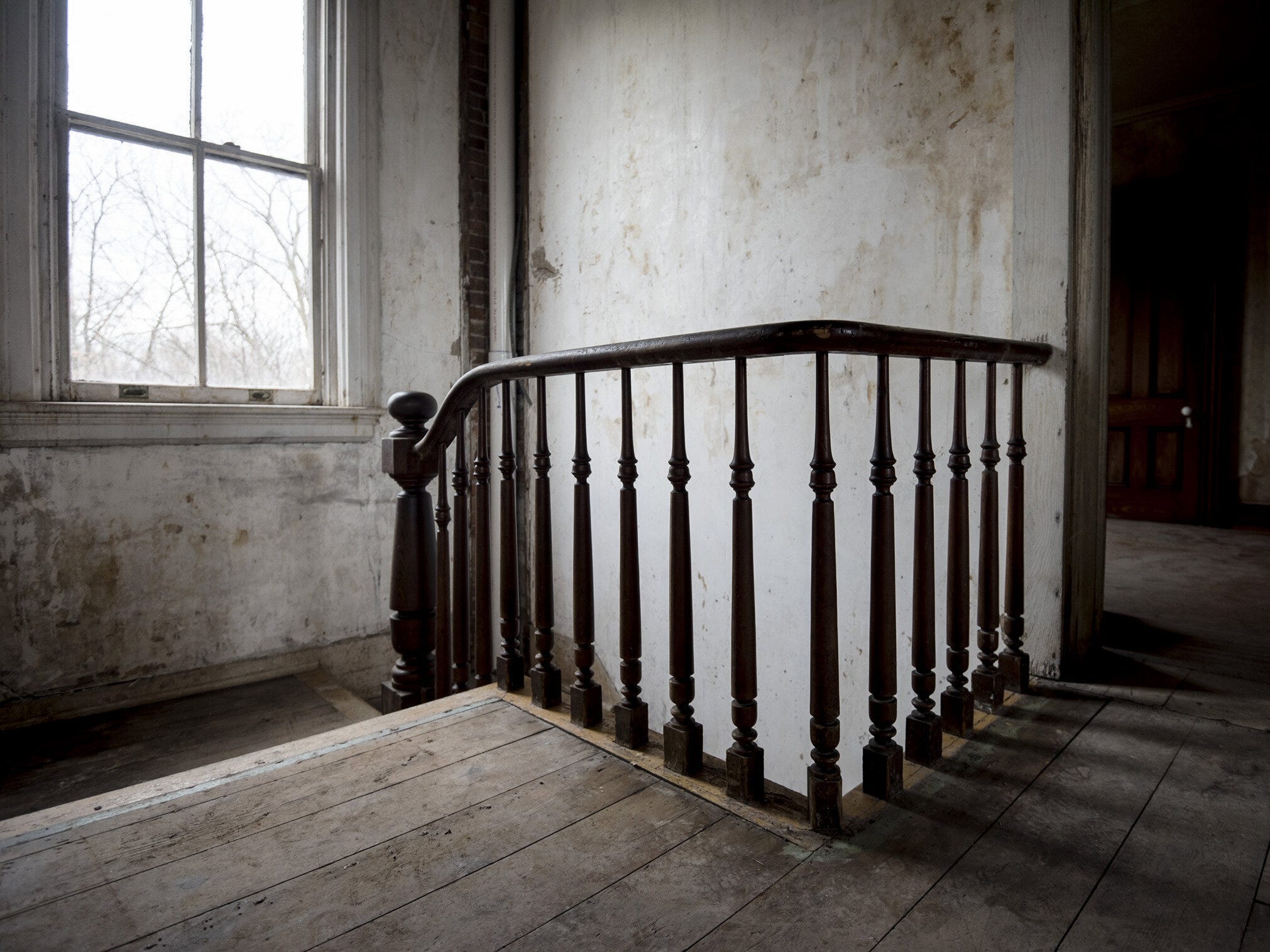 “There’s something there,” he said, showing some of the footage the investigators found when exploring the home.

While some may assume a haunted mansion might be hard to sell, paranormal activity can actually make a house more desirable. 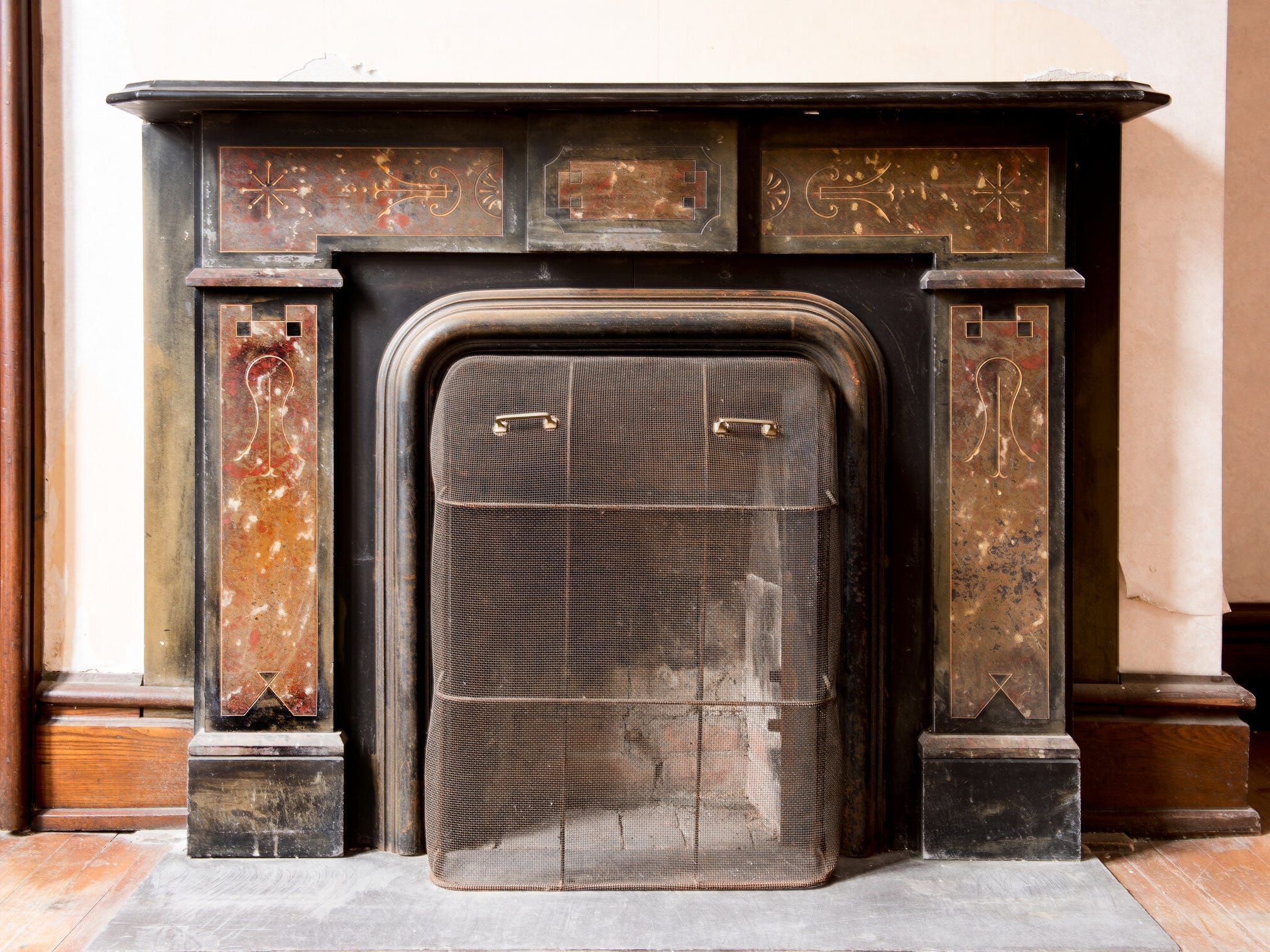 Haunted homes often capture the attention of thrill-seekers and even professional paranormal investigators. 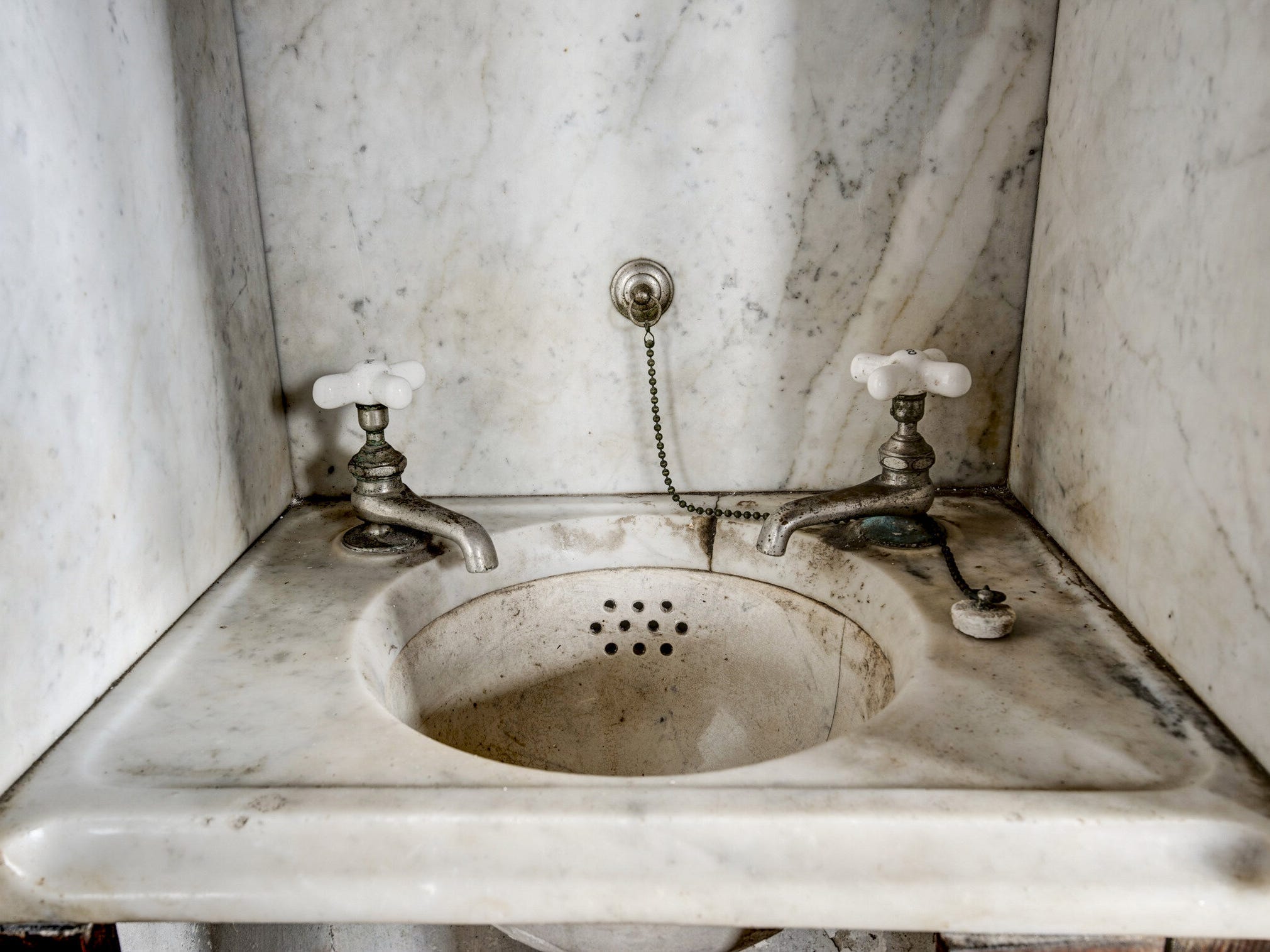 According to a post written on The Auburn Castle‘s Facebook page, one possible use for the home could be as a movie set.

However, one could also turn this historic mansion into a beautiful family home — as long as you’re not afraid of things that go bump in the night. 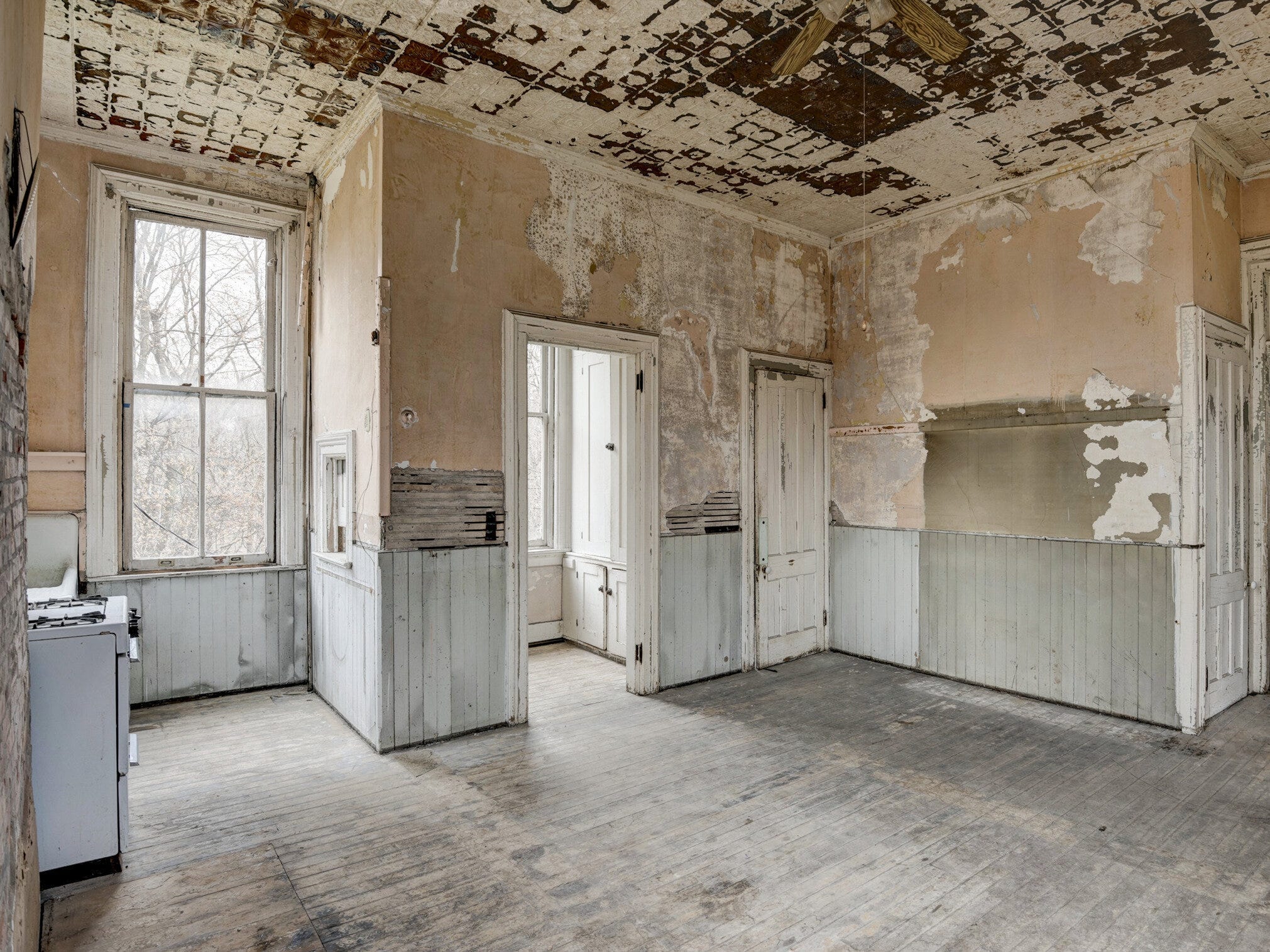 If fully restored, this massive mansion could be a one-of-a-kind residence. However, some restorations have already been made. According to New York Upstate, the previous owner installed a new roof and electrical system.

An old clawfoot bathtub and sink can be found inside one of the mansion’s many rooms. 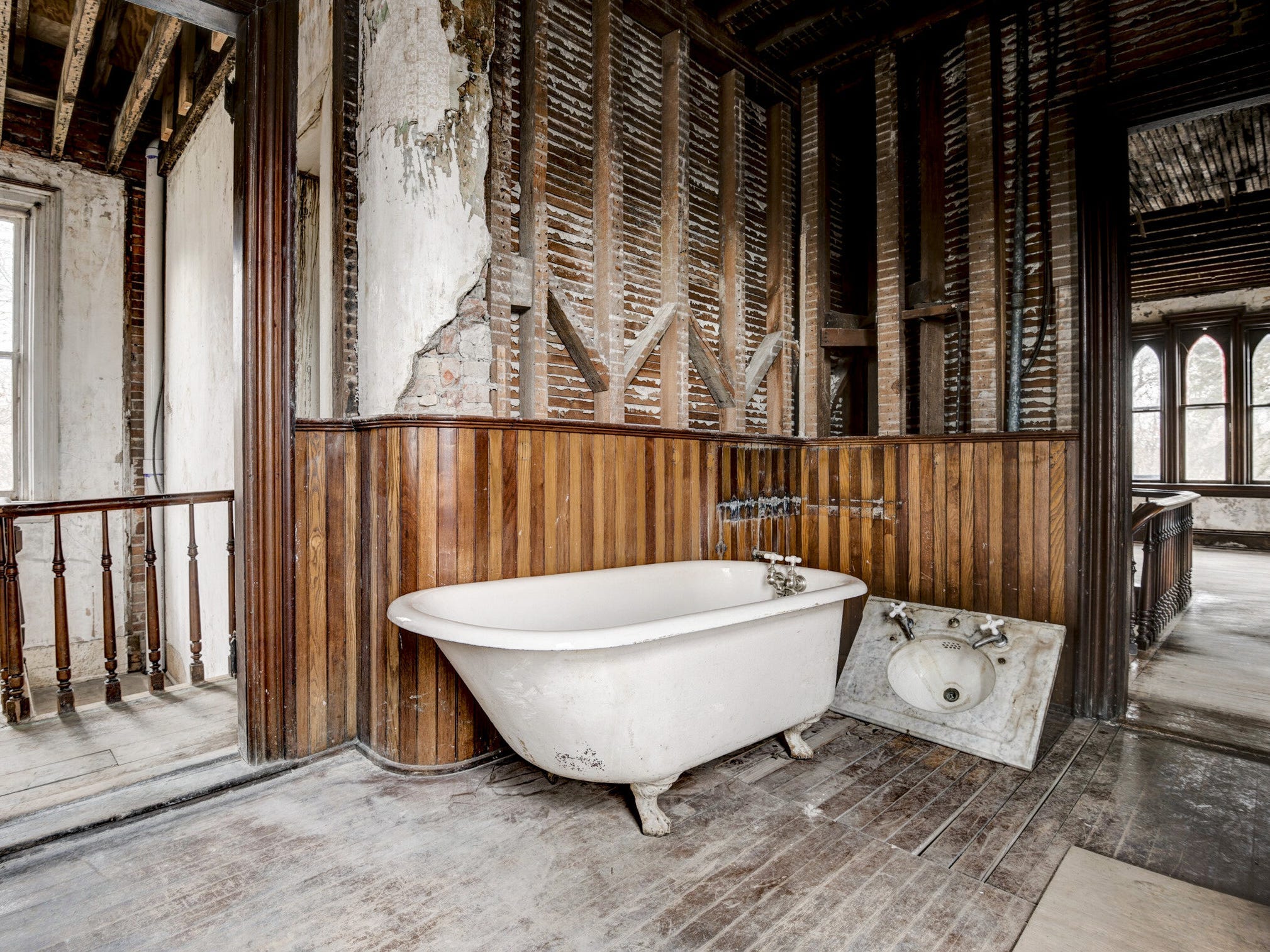 The mansion is not currently listed on the National Register of Historic Places, but the listing states that future owners could request for it to be added to the register. 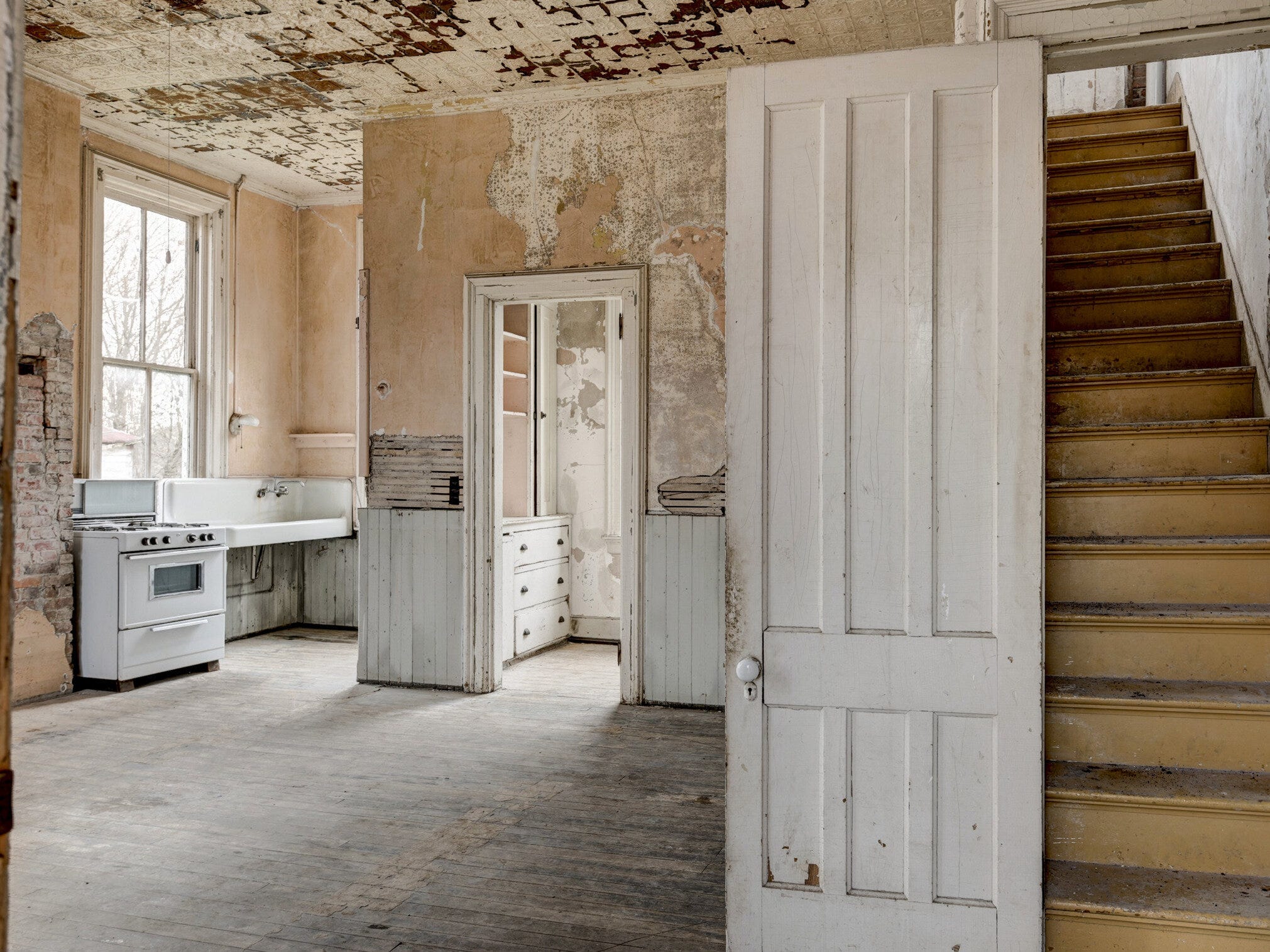 Historic fixer-uppers for sale are often included on the National Register of Historic Places.

The mansion also has a basement. 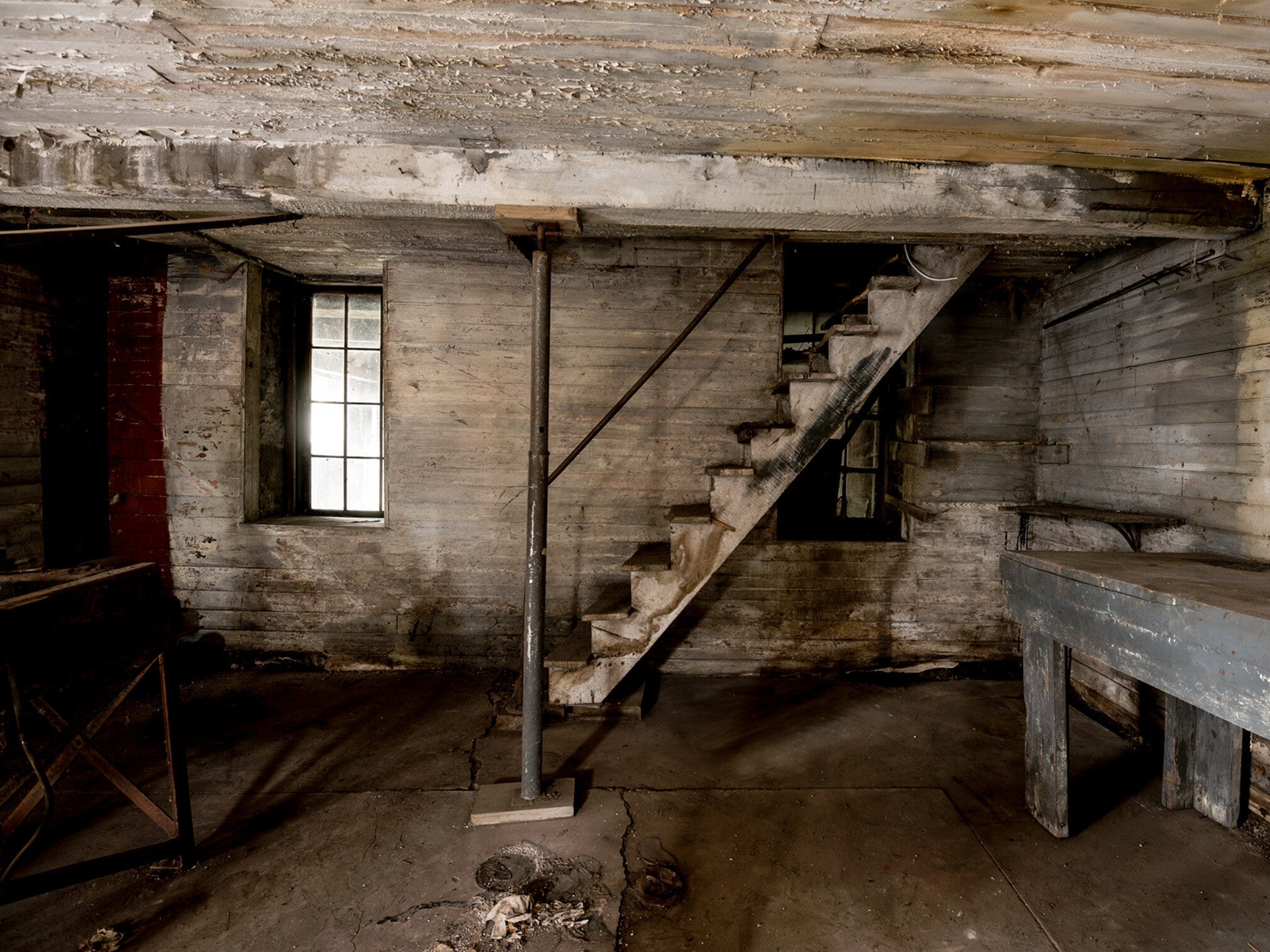 Despite looking like a horror movie set, the basement could be a valuable asset to a future homeowner.

The basement leads out onto the property’s backyard. 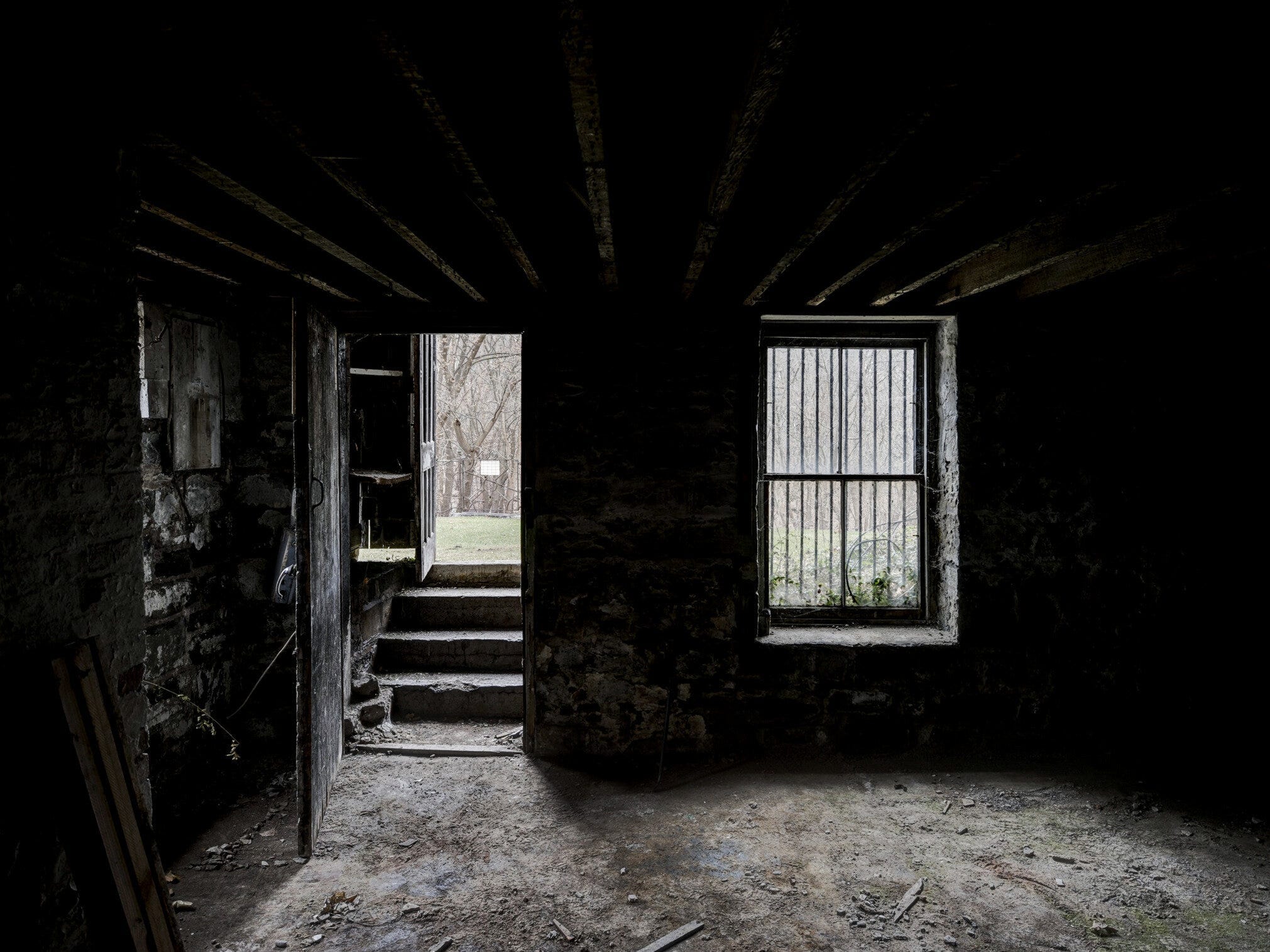 The surrounding city of Auburn has a lot to offer potential residents, including museums, historic sites, and national landmarks, the listing says.

The property also has a historic carriage house. 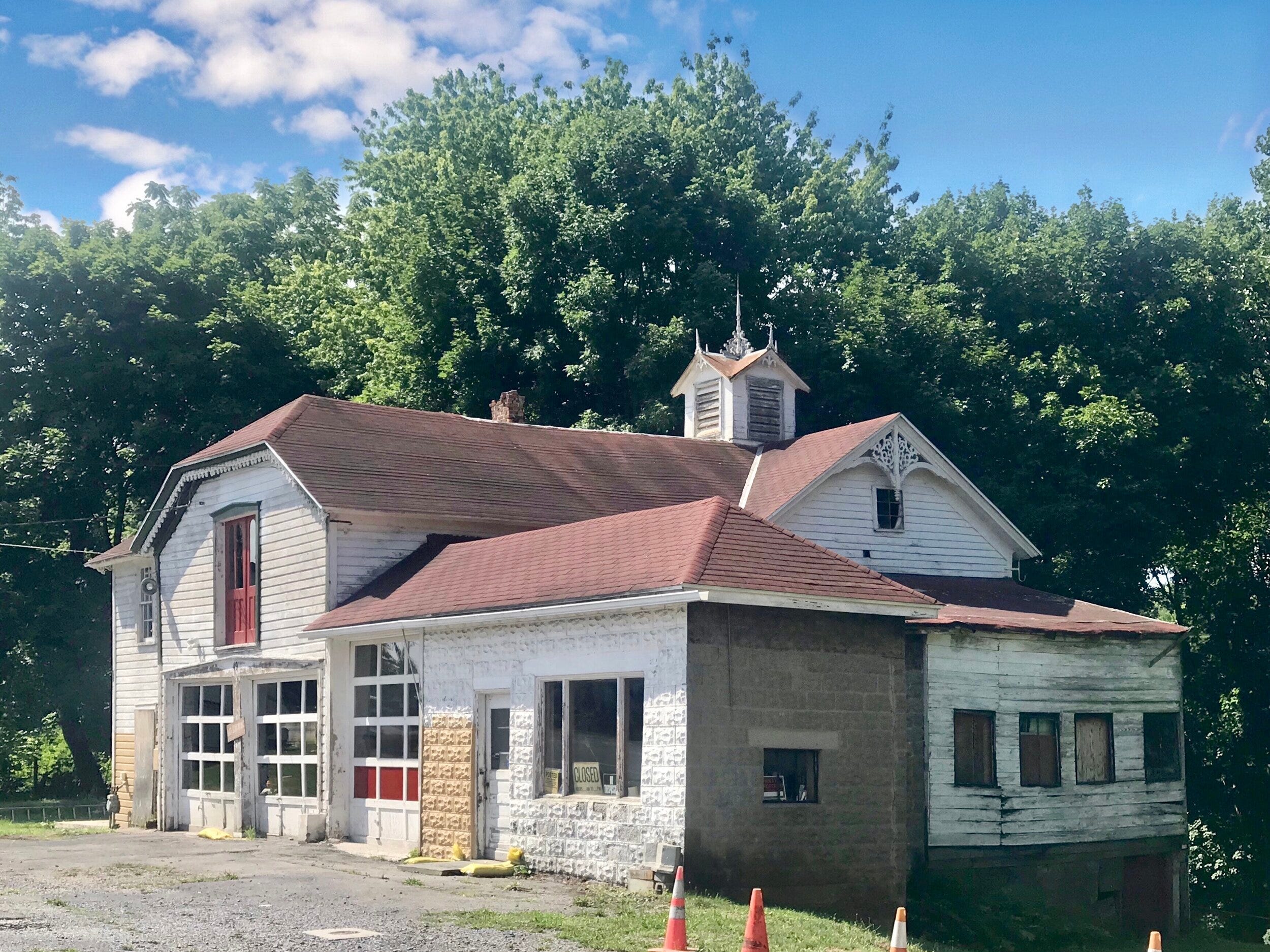 You might not want to walk the grounds at night, however, for fear of running into a ghost.

The home will likely need thousands of dollars in restorations. 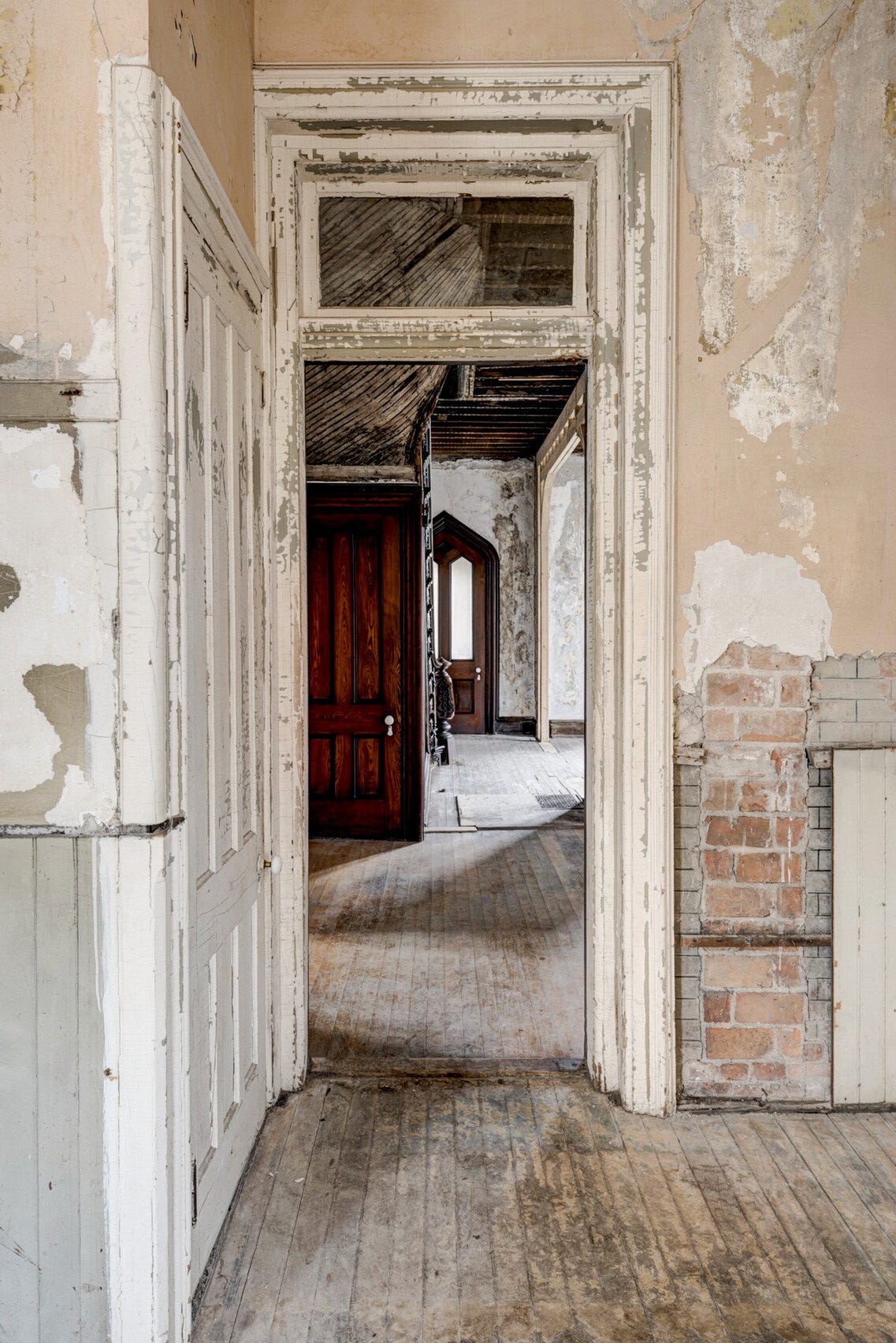 However, the starting bid for the home was relatively low at just $US25,000.

Bids on the historic mansion were accepted up until midnight on Halloween. 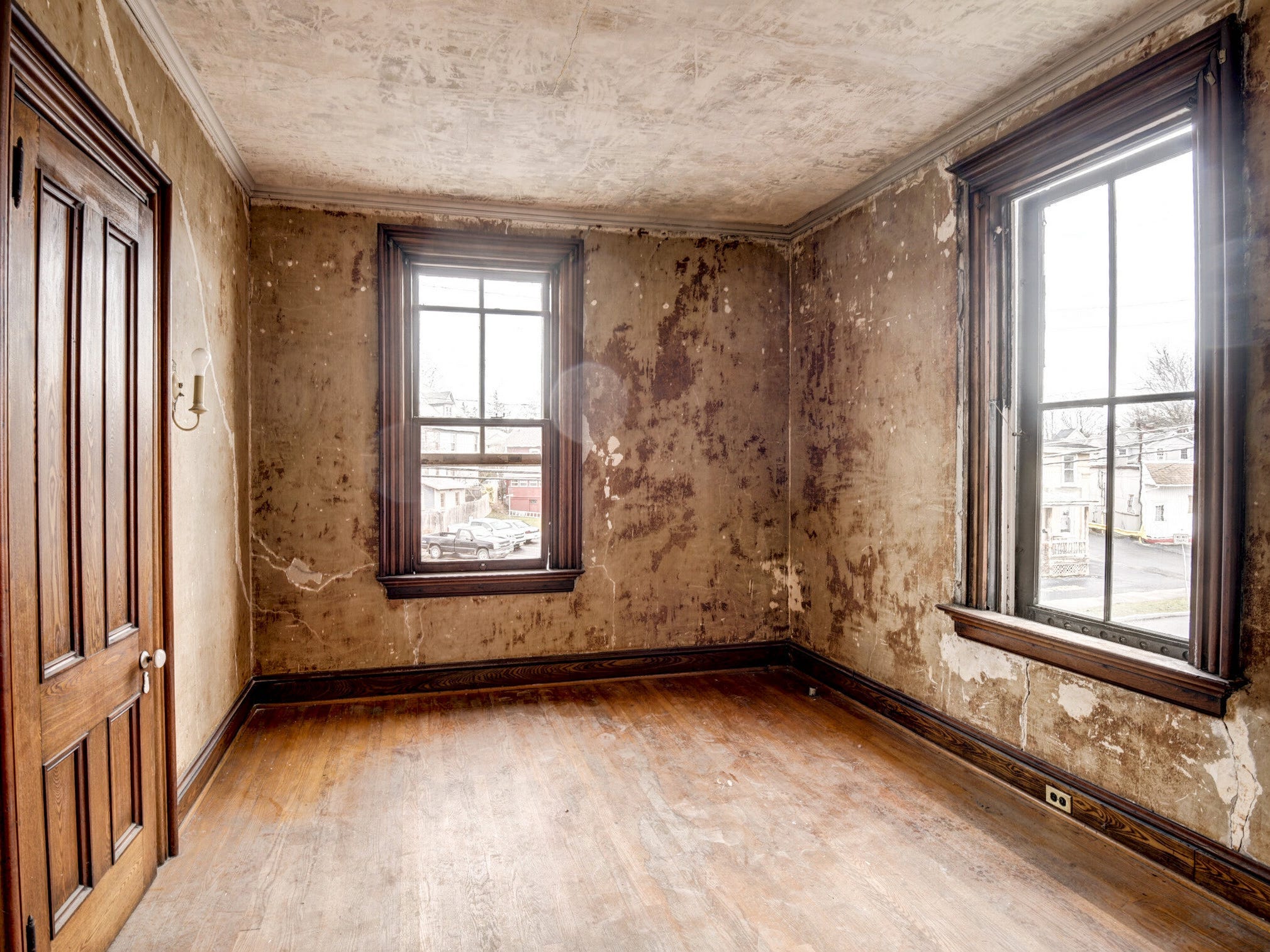 Realtor Michael DeRosa wrote in a Facebook post that prior to the auction’s end, the house had already received a lot of interest.

Realtor Michael DeRosa told Insider that the home received over 350 bids from around the world. 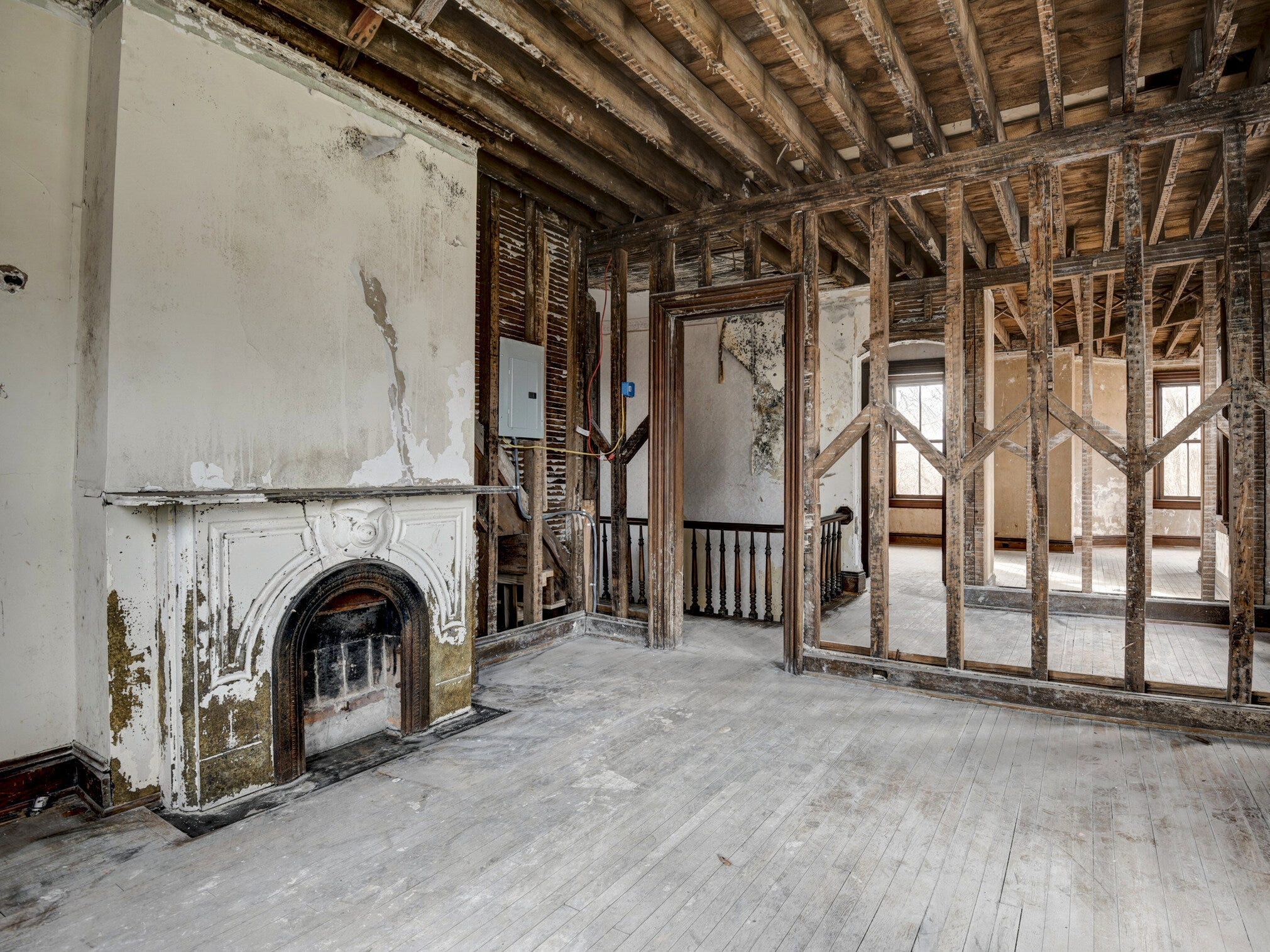 Those interested in owning this reportedly haunted property had the option to place bids online or by contacting realtor Michael DeRosa.

The top 10 bids came from nearby states like New York and New Jersey, as well as California and Florida.

For sceptics and ghost hunters alike, this haunted property is undeniably creepy. 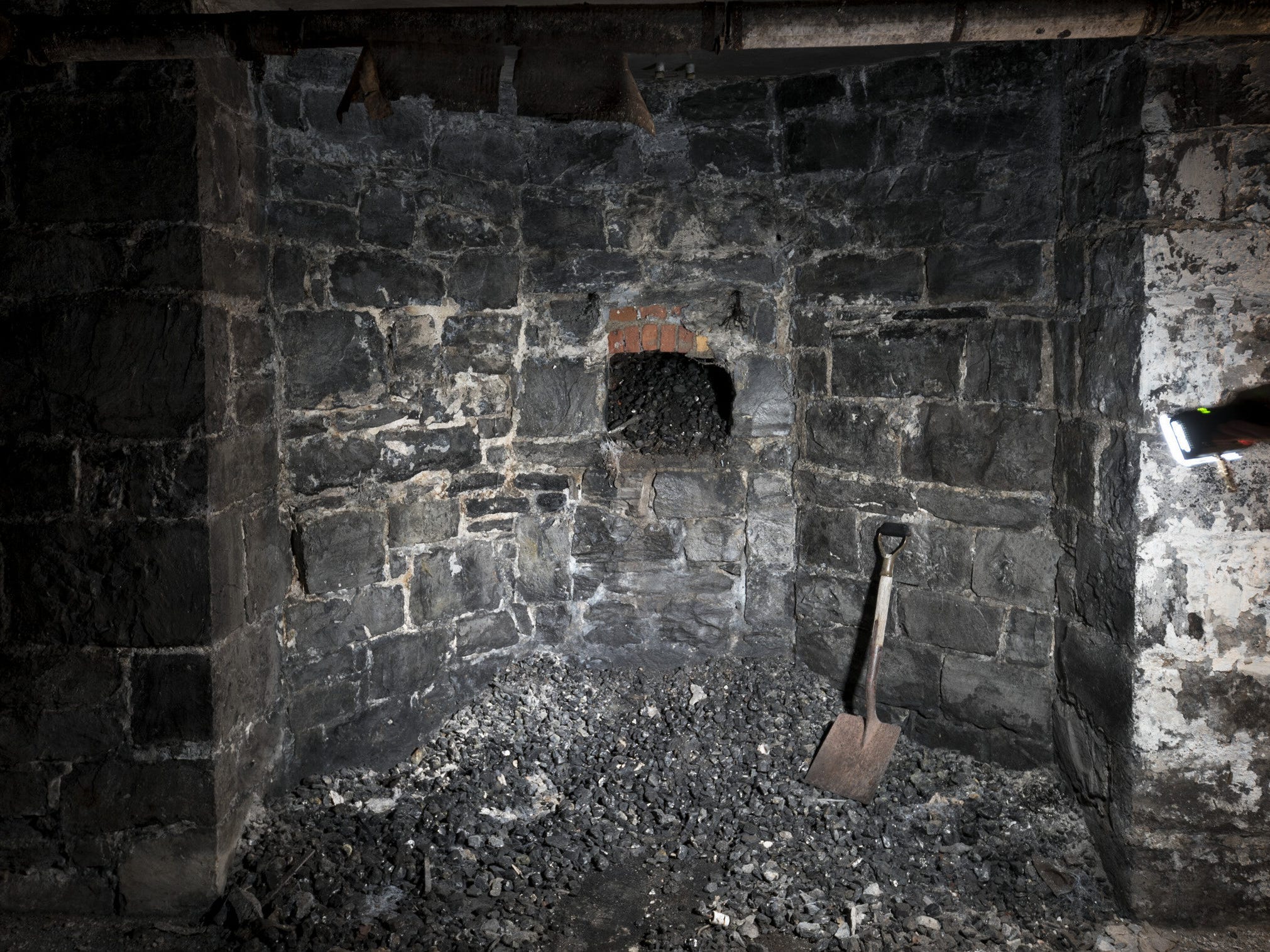 DeRosa explained that despite the property’s haunted reputation, the booming real estate market in the area made the bidding process quite competitive.

“The real estate housing market in Upstate New York is blistering hot right now and some properties are selling in a matter of hours,” he told Insider. “The buying demand is being driven by conditions related to coronavirus, the pandemic, and the understanding that buyers don’t have to be tied to big urban areas any longer because the way they work has fundamentally changed and they are allowed to work from home.”

For the winning bidder, this famous castle could prove to be the real estate adventure of a lifetime – or just a really cool ghost story to tell next Halloween.