I spent 3 weeks using Microsoft's new 'Netflix of games' streaming service, and for $15 a month I'm convinced it's the best game streaming option by a mile

Before it was a major streaming service with Oscar-winning original content, Netflix used to send DVDs in the mail to subscribers.

The streaming giant built its initial subscriber base by undercutting the existing rental and purchase models on price. Then, when it launched streaming, Netflix fundamentally altered the way we purchase and consume entertainment.

Microsoft is attempting the same for video games: Xbox Game Pass is a paid subscription service that offers access to a large library of games that you can download and play. It undercuts the competition on price, and it’s turning to streaming right now.

In mid-September, Microsoft added a game streaming option to the Game Pass library. Could this be the start of the first actual “Netflix of games” service?

Game Pass changes how people play games, and how many games they play. 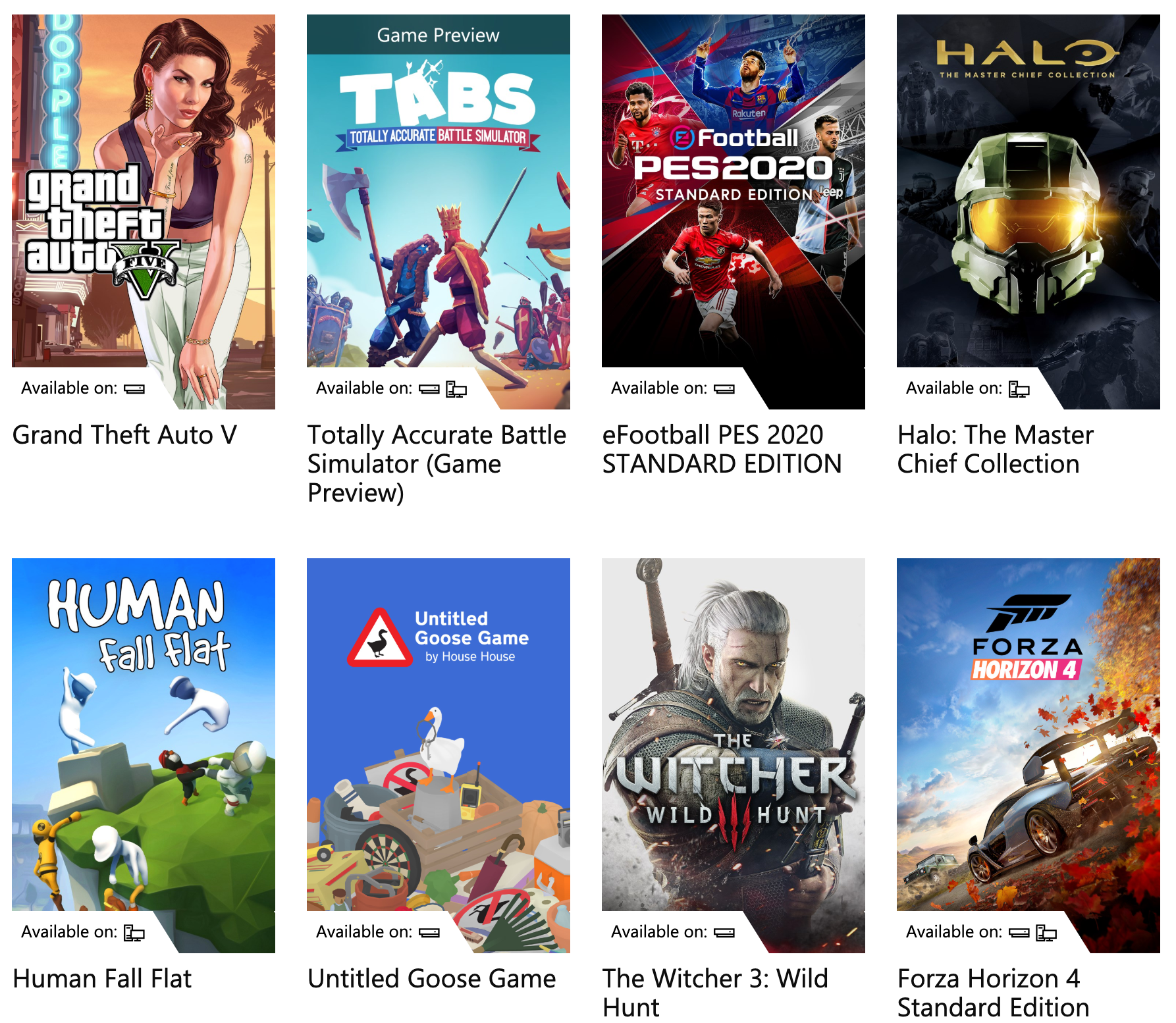 MicrosoftSome of the many games that have been part of the Xbox Game Pass library.

Game Pass, with or without the streaming option, is a killer deal: For $US10 to $US15 per month, you get access to over 100 games on Xbox and PC. Some of those games are brand new, and some are classics, and the vast majority are pretty great. Every first-party Microsoft game is available through the service at launch, including all the games that are coming from Microsoft’s recent purchase of Bethesda, the publisher behind “The Elder Scrolls,” “Fallout,” and “Doom.”

If you were going to buy even a single game that’s available through the service, paying for the subscription is likely the better deal.

Because people have a wide library of games to play as part of their subscription, they play a wider variety of games. The only limitations are storage space, download speed, and free time.

With the addition of streaming this past September, two out of three of those issues are circumvented completely. If you want to play a game, all you have to do is hit play and you can start playing as soon as it loads. 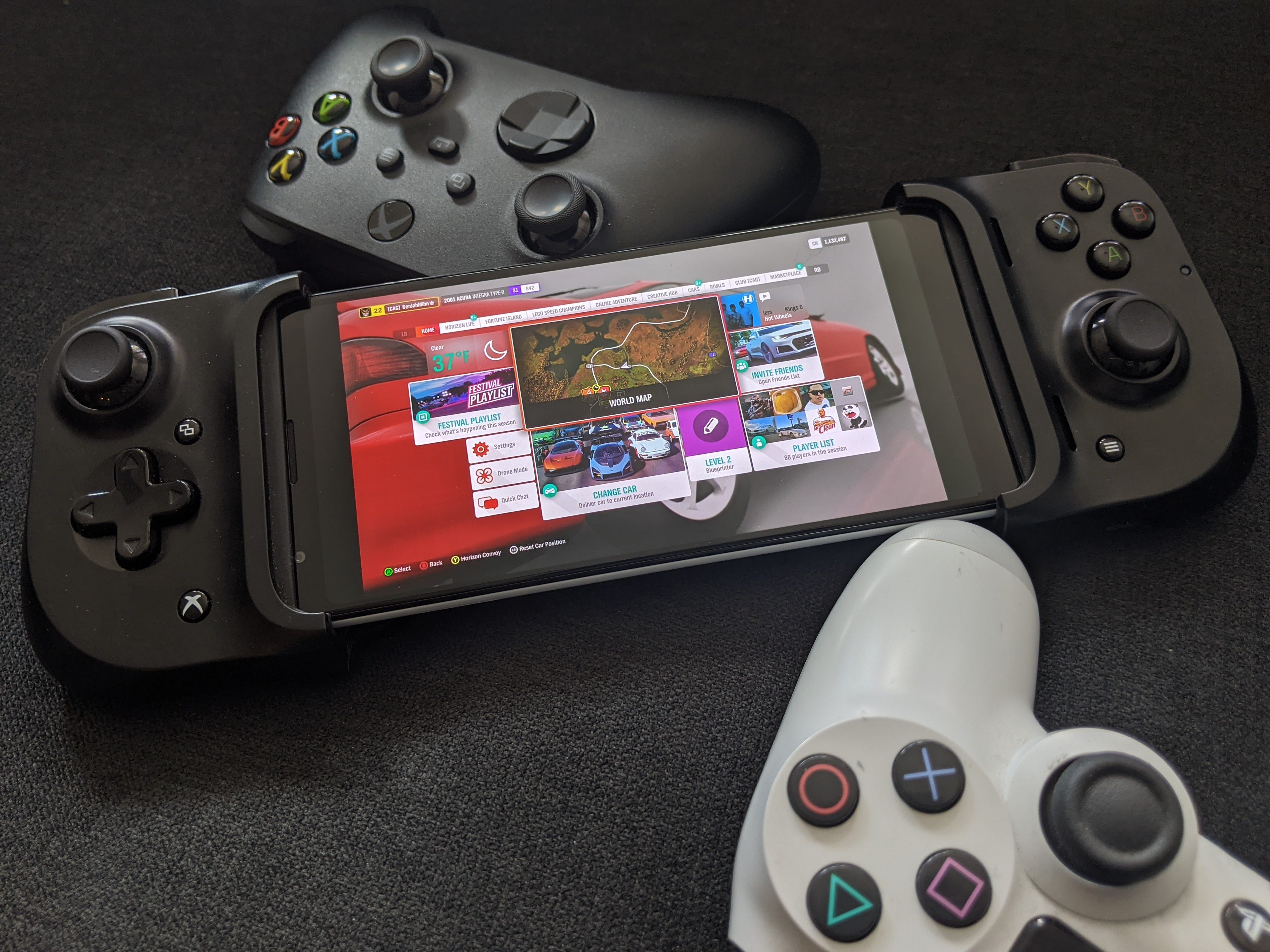 Video game streaming is not the same as video or music streaming, and there’s one clear reason for that: Interactivity.

For most players, the time it takes for a button press to translate into in-game action on a local device is imperceptible. You push A, and the little plumber leaps into the air.

But the equation changes when the internet gets involved: You push A, that button press is sent to a device in the cloud that’s actually powering the game, it registers your input, and the live video of that is sent back to you. The plumber leaps once again.

That concept, known as “input lag,” is key to why video game streaming isn’t the same as music or video. If players feel a disconnection between their actions and the game they’re playing, it could ruin the experience and/or outright render the game unplayable. It’s a critical part of why, thus far, no major video game streaming service has been successful.

But with Xbox Game Pass, streaming doesn’t have to be perfect – it’s a value add to a service that’s already a good deal. It enables subscribers to easily, immediately try a game before fully downloading it, and to do that wherever they want. If they like the game, but don’t like the input lag, they can just download the game to their Xbox or PC.

The streaming element isn’t intended to replace the core service, but to complement it. And it does that generously. 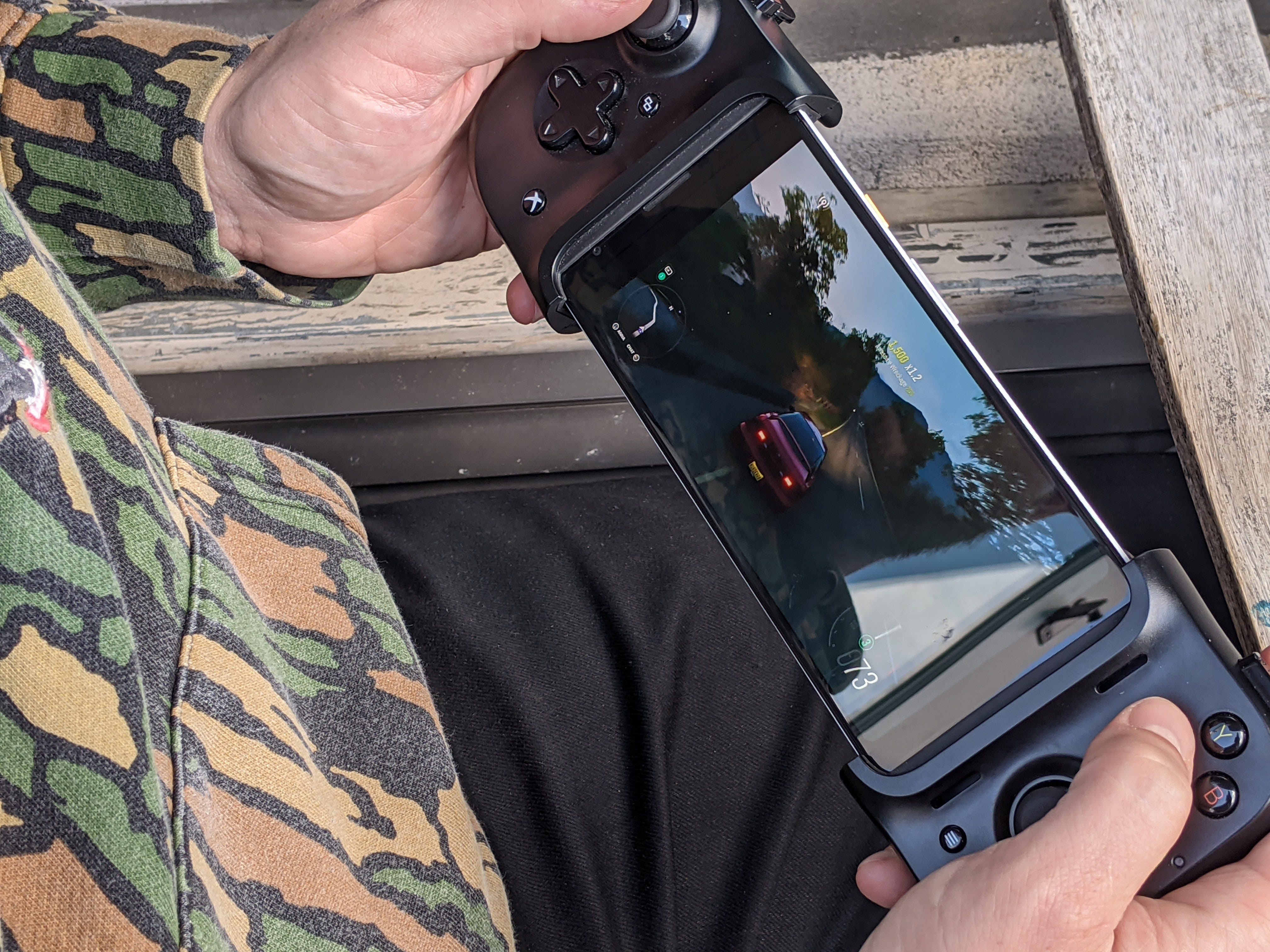 Sarah Gilbert/InsiderHere I am playing ‘Forza Horizon 4,’ which I originally started on my Xbox One, on my Android smartphone. The controller attachment is a Razer Kishi that Razer provided.

Playing games over the internet, streamed to my Pixel 3A XL with a Razer Kishi gamepad wrapped around it, feels pretty magical – along the lines of playing Nintendo Switch for the first time.

It’s not quite as comfortable as using an actual Xbox gamepad connected to an Xbox that’s broadcast to my TV, but it’s a pretty amazing compromise considering I can sit on my balcony and play Xbox games. Better still: Since my save data is connected to the cloud, I can pick up games exactly where I left off, make progress, and return to them later on console with that progress recorded.

It’s the video game equivalent of starting an episode of “Schitt’s Creek” on my phone, pausing it, and finishing the episode on my TV later on exactly where I left off.

Notably, all of this costs exactly zero dollars more than the existing cost of Xbox Game Pass. So when it stutters, which it does occasionally, I don’t mind too much. When the graphics are a little rough for a few moments, which also happens sometimes, I’m not that concerned.

And none of these issues are so persistent as to make the service unusable, though they do make me think twice about which games I stream. Fighting games, for example, are particularly impacted by input lag, and I wouldn’t want to play a competitive online shooter over a video game streaming service.

But most of the time, playing “Spiritfarer” or “Lonely Mountains Downhill” or “Forza Horizon 4,” I was just impressed that I could play the game on phone with a gamepad wherever I chose.

And Game Pass streaming succeeds where services like Google Stadia do not. 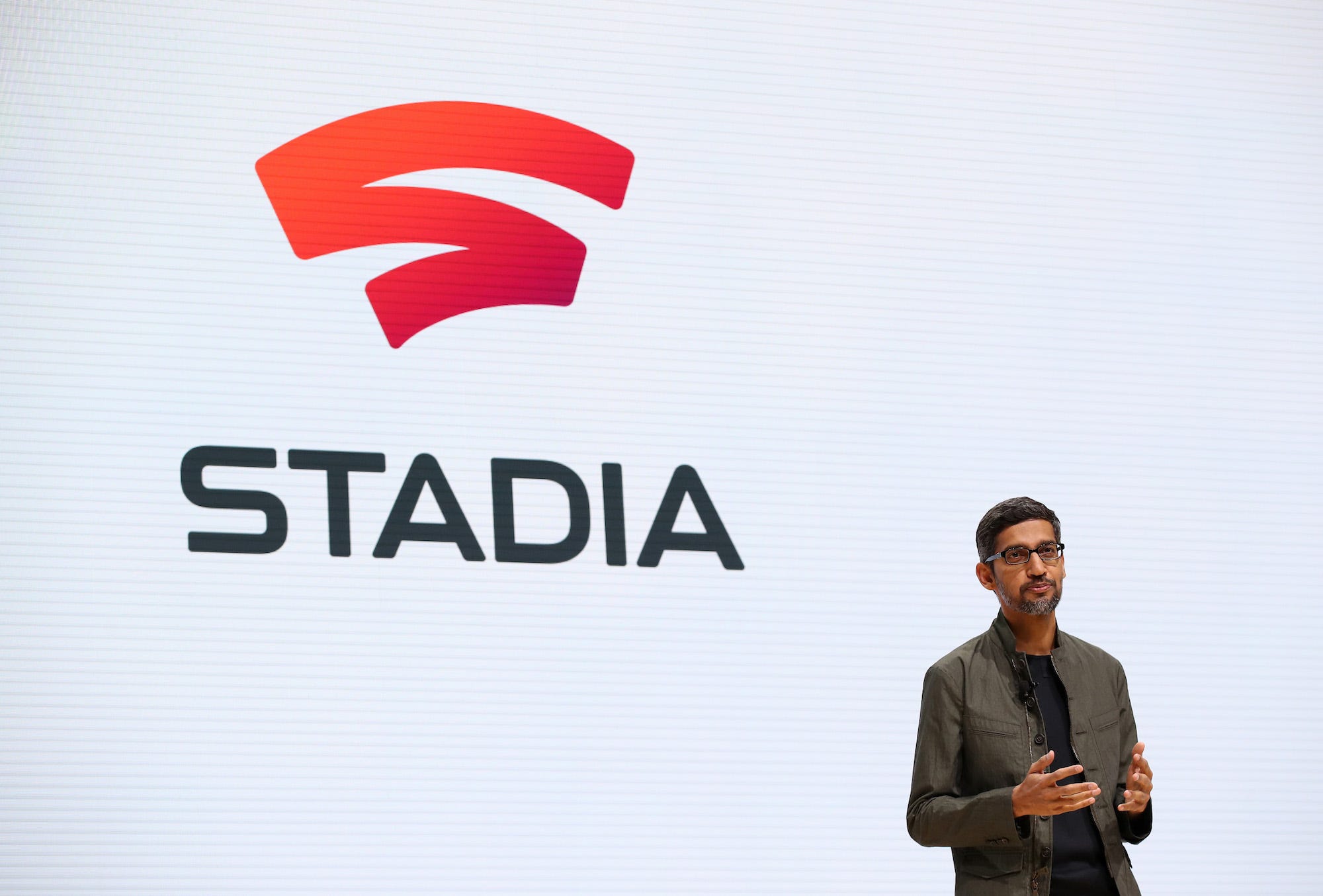 Google has its own video game streaming service, Google Stadia.

The service has failed to catch on, and that’s due at least in part to its pricing model: Rather than paying for a subscription that provides access to an instant streaming library, the service is free but you pay for each game. The vast majority of those games are available elsewhere, and playing them on Stadia is a distinctly less enjoyable experience than playing them on a traditional console, because of the aforementioned input lag.

Xbox Game Pass has over 15 million paying subscribers, and that’s before it added the ability to stream video games.

The reason for its success is that it offers a large library of good games for a relatively low price. Moreover, you can choose to either play those games locally (on Xbox/PC) or streamed (to Android smartphones). Where Stadia is dependent on its streaming service being good enough to drive interest, Game Pass uses streaming as an add-on to the established way of playing games.

Like Netflix used its disc-based subscription service to drive its push into video streaming, Microsoft is using its success with Game Pass as a download-based service to push into game streaming. Thus far, the strategy appears to be working