The 'Hamilton' movie is coming to Disney Plus in July, more than a year before it was expected to hit theatres 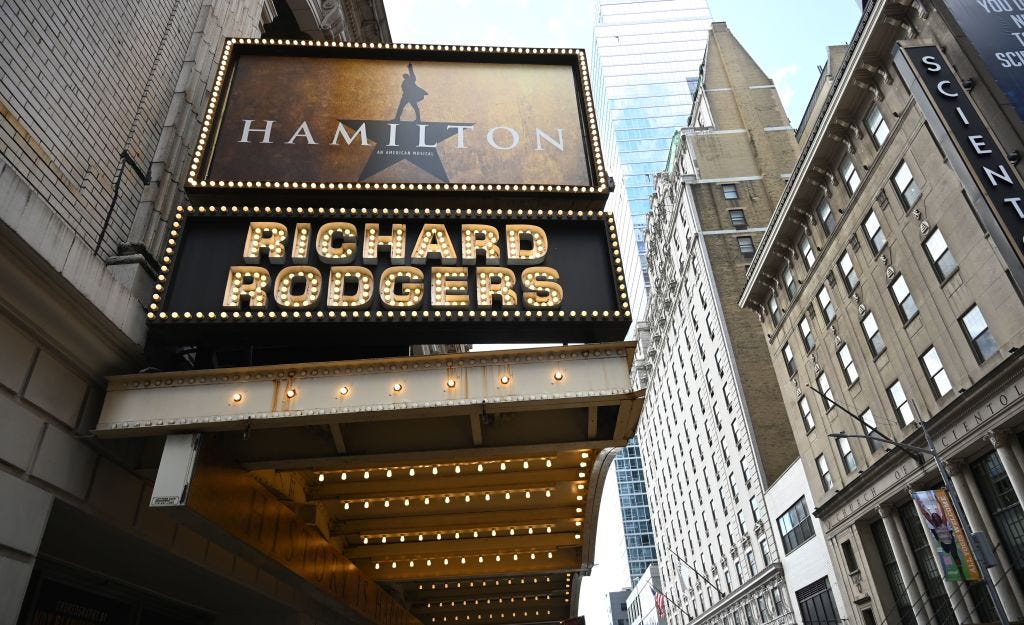 TIMOTHY A. CLARY/AFP via Getty Images

“Hamilton” is coming to the screen much earlier than expected.

The “Hamilton” movie, a filming of a stage production of the hit Tony-winning Broadway musical featuring the original cast, was set to hit theatres in October 2021. But the creator and star of the musical, Lin-Manuel Miranda, announced on Twitter on Tuesday that the movie will be available to stream on Disney Plus this July 3.

Disney acquired worldwide rights to the “Hamilton” movie earlier this year for a whopping $US75 million, according to Deadline. It likely would have been a theatrical hit that earned that money back and then some.

But Disney is uniquely impacted by the coronavirus pandemic, which has forced its parks to close and its theatrical movies to be delayed as most theatres in the US, and other countries, shut down. In a March report, the Wall Street firm UBS called Disney the most exposed major media company during the crisis because of its revenue from parks, movies, and advertising.

The biggest bright spot right now for Disney seems to be Disney Plus. During the company’s most recent earnings report last week, CEO Bob Chapek said that the streaming service, which launched in November, had 54.5 million subscribers. The TV analytics company EDO found in a recent survey of more than 6,800 people in the US that Disney Plus was the service making the biggest subscriber gains while people stayed home during the pandemic.

The “Hamilton” movie will likely reel in more subscribers during an unprecedented time for Disney when it needs them most.

“Hamilton” isn’t the only movie originally set for theatres that Disney is moving to Disney Plus.

“Artemis Fowl,” based on the children’s fantasy book series, is hitting the streamer in June and skipping its planned May theatrical release. Disney has also made theatrically released movies available on Disney Plus earlier than expected, such as “Onward,” “Frozen II,” and “Star Wars: The Rise of Skywalker.”

But that doesn’t mean the company has given up on movie theatres. The former CEO Bob Iger, who now serves as executive chairman, told Barrons last month that “there may be a few more that we end up putting directly onto Disney Plus,” but for the most part, the company will “wait for slots” on the theatrical release calendar.

It has already rescheduled most of its tentpole releases this year for later dates, such as the live-action “Mulan” remake, Marvel’s “Black Widow,” and “Jungle Cruise” starring Dwayne “The Rock” Johnson and Emily Blunt.

It will likely make decisions on a movie-by-movie basis from here on out, like other movie studios.

Universal’s “Trolls World Tour” debuted on digital platforms day-and-date with its planned theatrical release, prompting a war of words between the studio and the biggest theatre chain the world, AMC Theatres.

The chain said it would not play future Universal releases if the studio didn’t respect the theatrical window. In response, Universal said it would “release future films directly to theatres, as well as on PVOD when that distribution outlet makes sense.”

Movie studios would miss out on major profits if they abandoned movie theatres completely and they will still release movies under the traditional theatrical window once theatres reopen, in which theatres get exclusive screenings of a movie for up to 90 days before they can become available on other platforms. But in some cases, it will make sense to bypass theatres. “Hamilton” is one of those cases.