Ever since First Lady Mamie Eisenhower decked out the White House with faux skeletons, jack-o-lanterns, and bundles of dried corn in 1958, celebrating Halloween has been a beloved tradition of presidential administrations.

Local children and military families are often invited to trick-or-treat as performers provide entertainment amid the festively decorated grounds. Even White House staffers get into the spirit by donning costumes.

On their fourth Halloween in the White House this year, the Trumps are handling things a little differently because of the novel coronavirus pandemic. First Lady Melania Trump said in a statement ahead of the event that social distancing and masks will be required, and a number of other precautions will be put in place to help prevent the spread of COVID-19.

As the Trumps prepare for this year’s celebration, here’s a look at how various administrations have marked the holiday over the past 60 years. 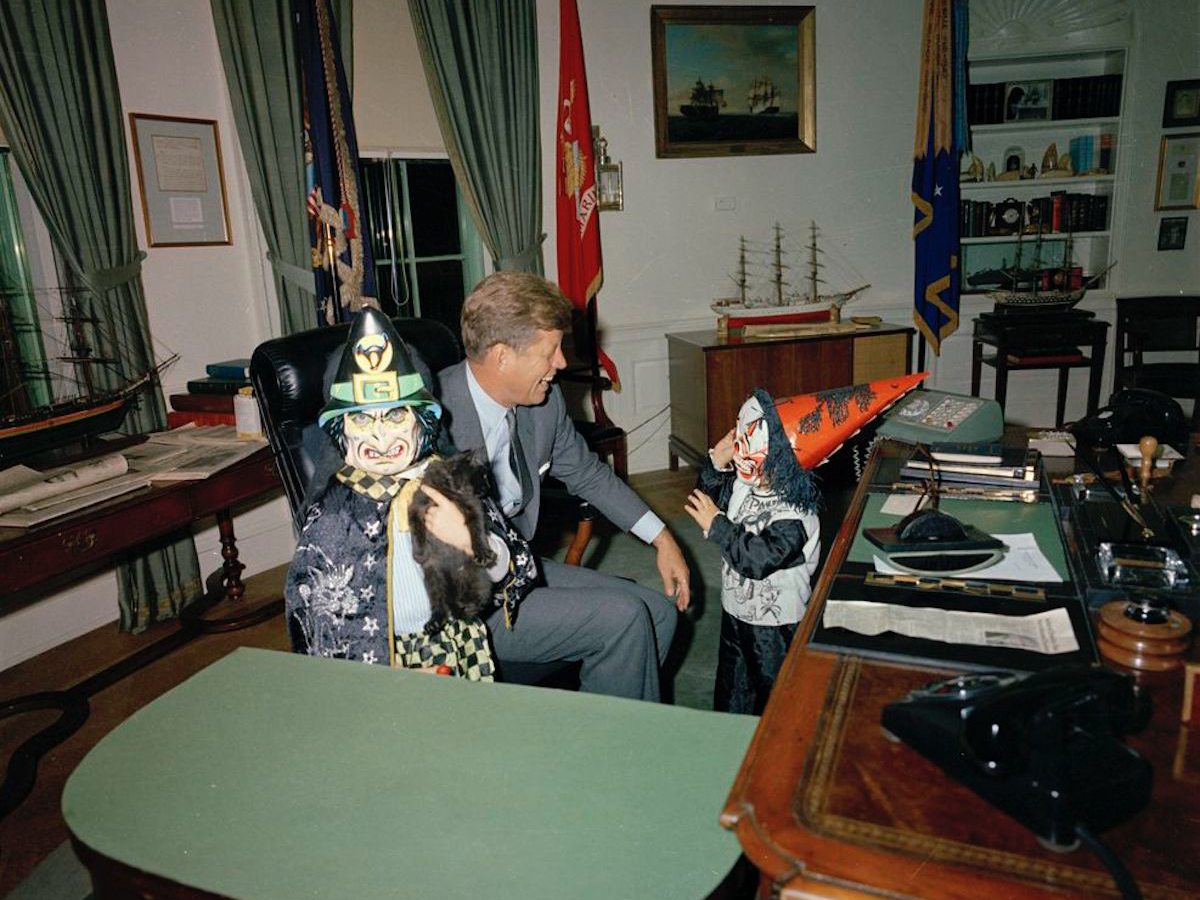 On October 19, 1977, Amy, the daughter of President Jimmy Carter and First Lady Rosalynn Carter and her friends carved pumpkins during Amy’s 10th birthday party at the White House. 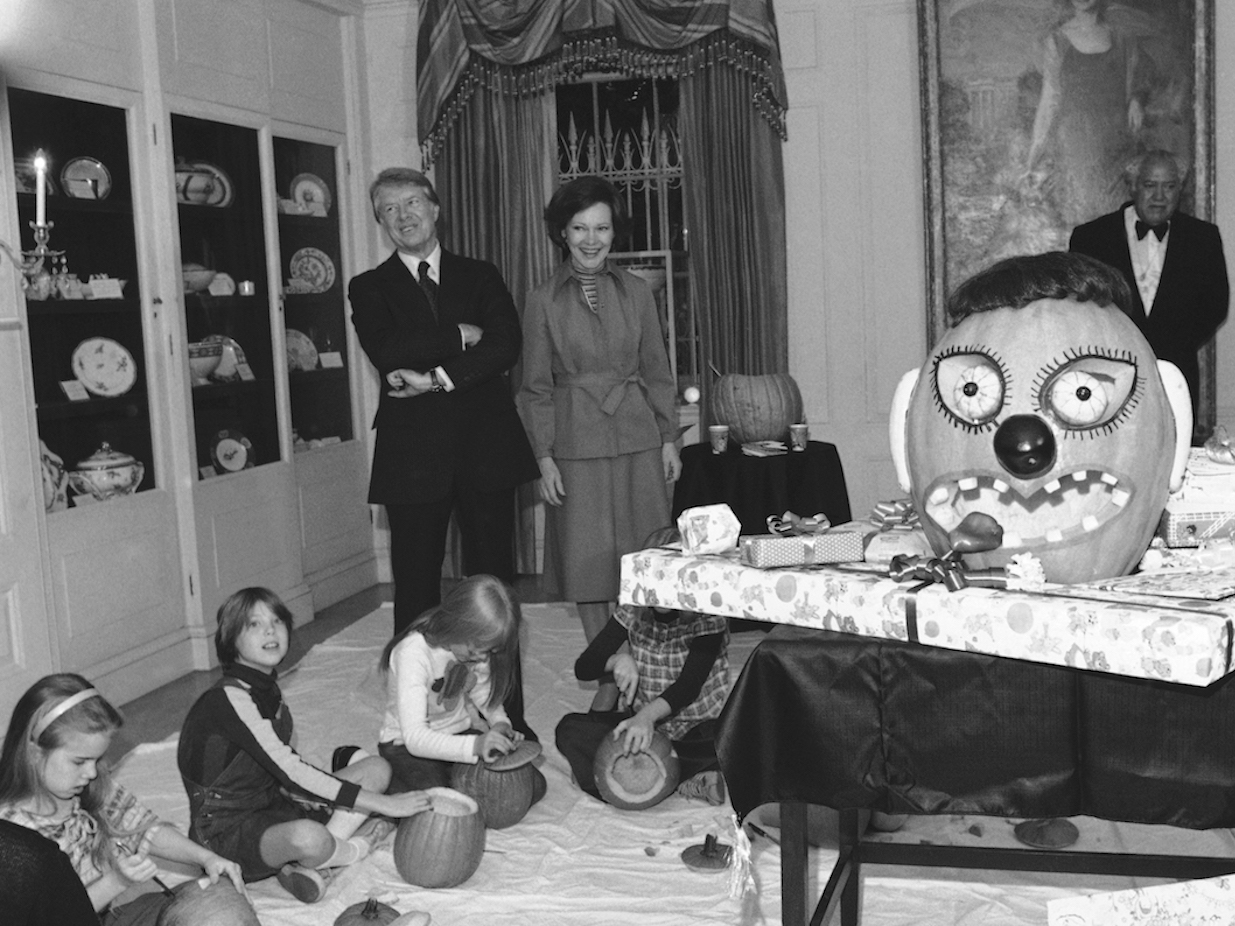 AP PhotoAmy Carter had a Halloween-themed birthday party at the White House.

First Lady Barbara Bush greeted trick-or-treaters outside the South Portico of the White House on Halloween in 1989. 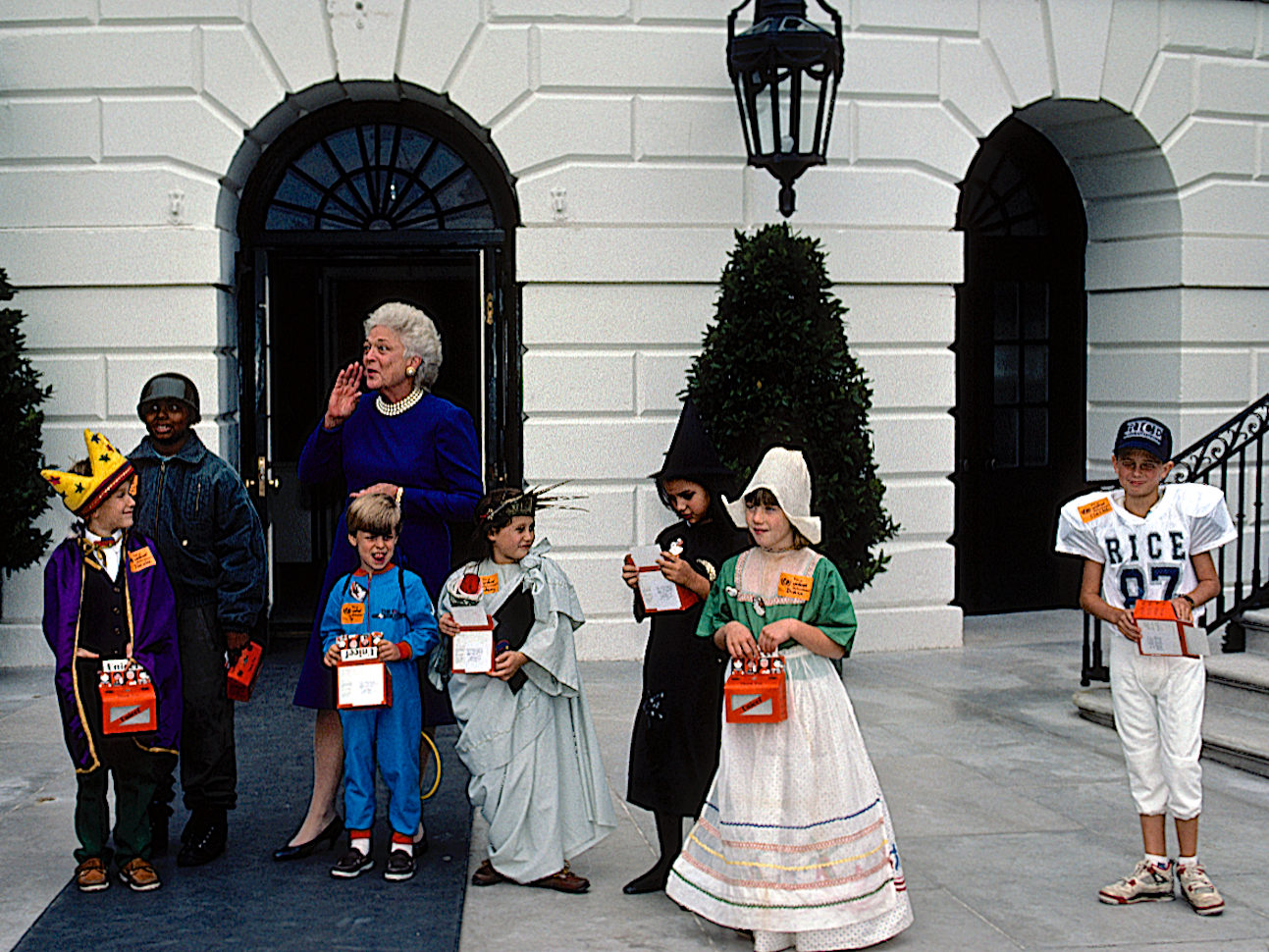 Mark Reinstein/MediaPunch/IPx/Associated PressThe Bushes hosted a Halloween party for 600 schoolchildren on the South Lawn in 1989.

President George H.W. Bush and First Lady Barbara Bush joked around with TV personality Willard Scott during a Halloween party on the White House lawn in 1989. 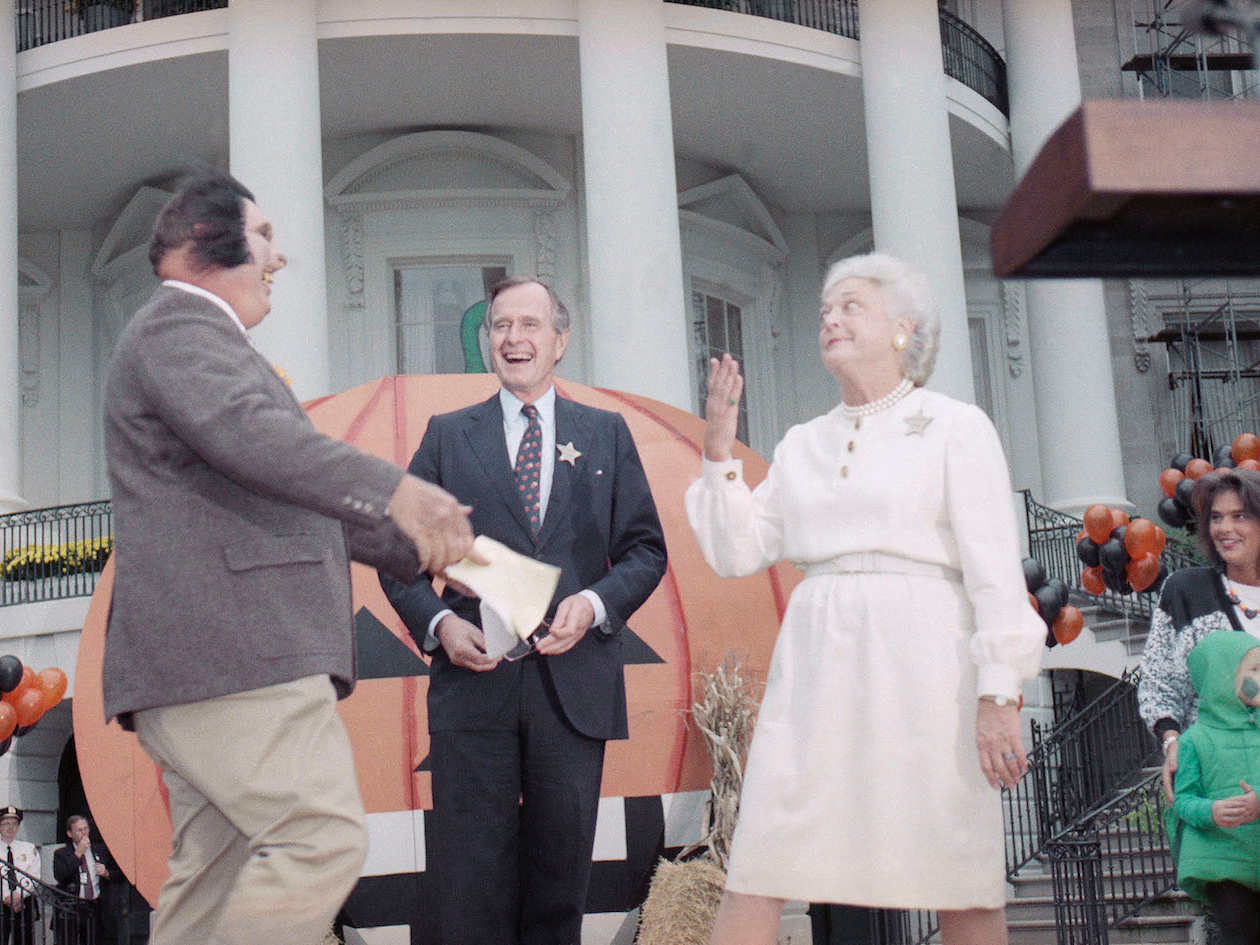 President George W. Bush posed with local children who were trick-or-treating at the White House on Halloween in 2002. 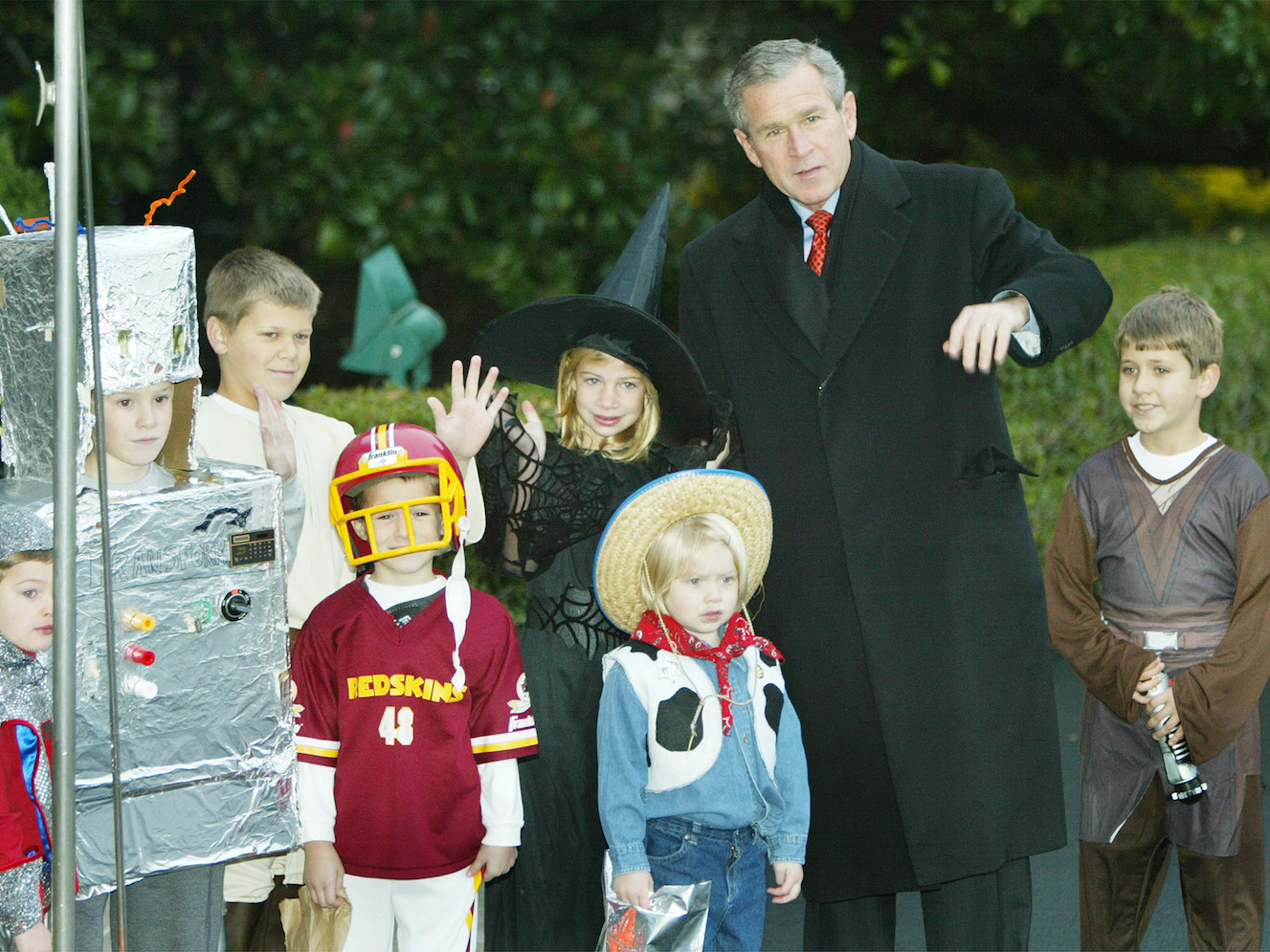 President Barack Obama and First Lady Michelle Obama handed out candy to kids at the White House on October 31, 2009. The first family welcomed more than 2,600 children and parents from Washington, Maryland, and Virginia to the White House for a Halloween party. 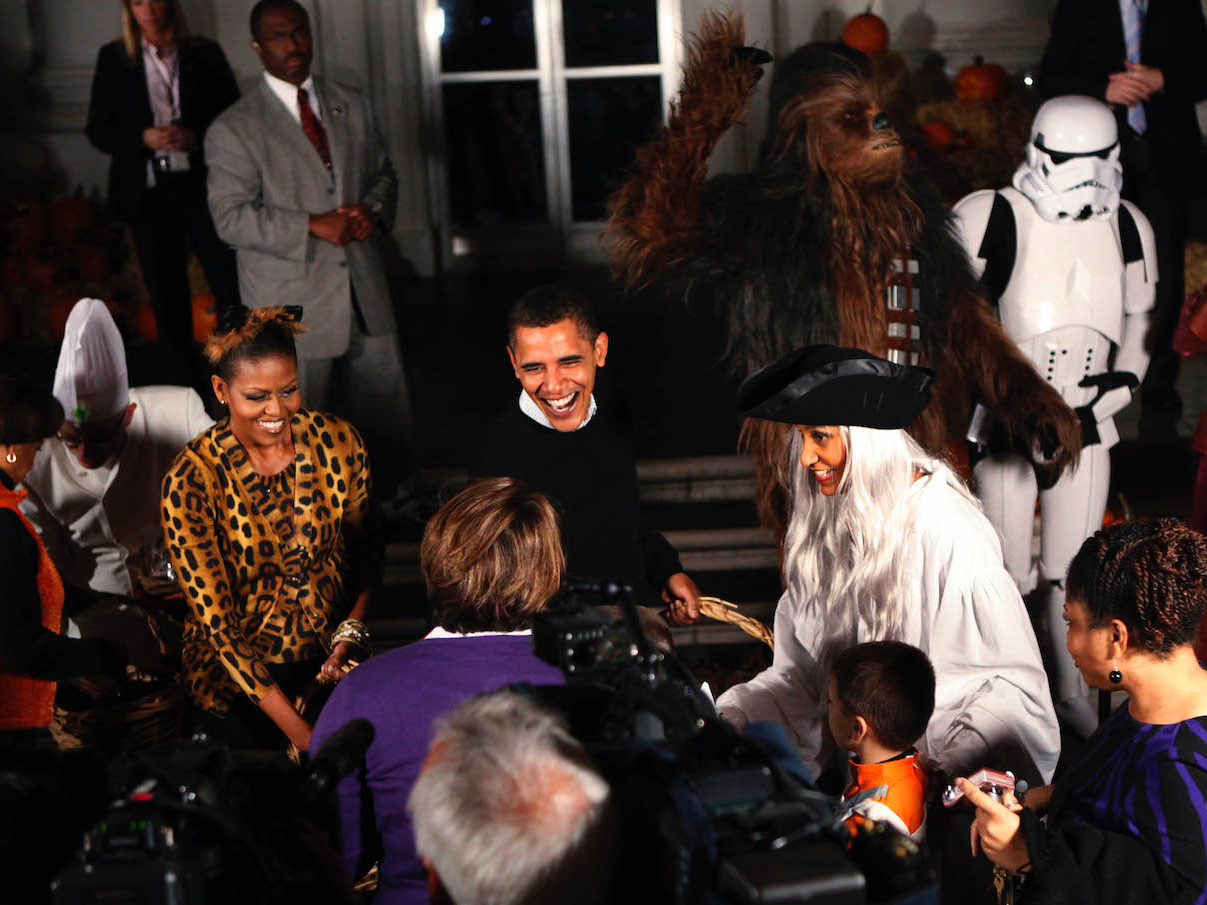 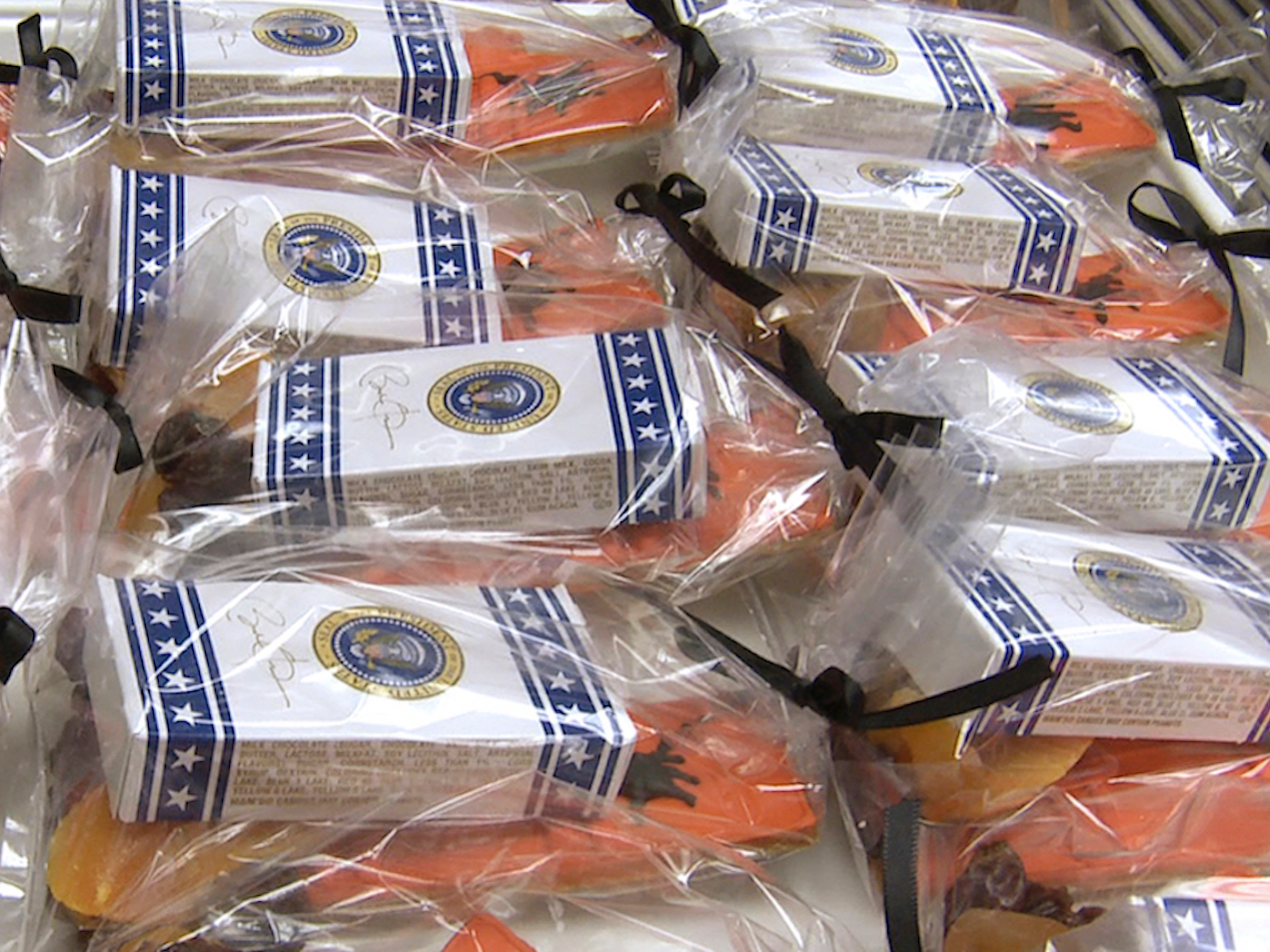 Charles Dharapak/Associated PressThe Obamas invited children to the White House for a Halloween party every year he was in office except 2012, when Superstorm Sandy hit the east coast of the US.

As children waited in line to trick-or-treat at the White House in 2009, performers like this skeleton band kept them entertained. 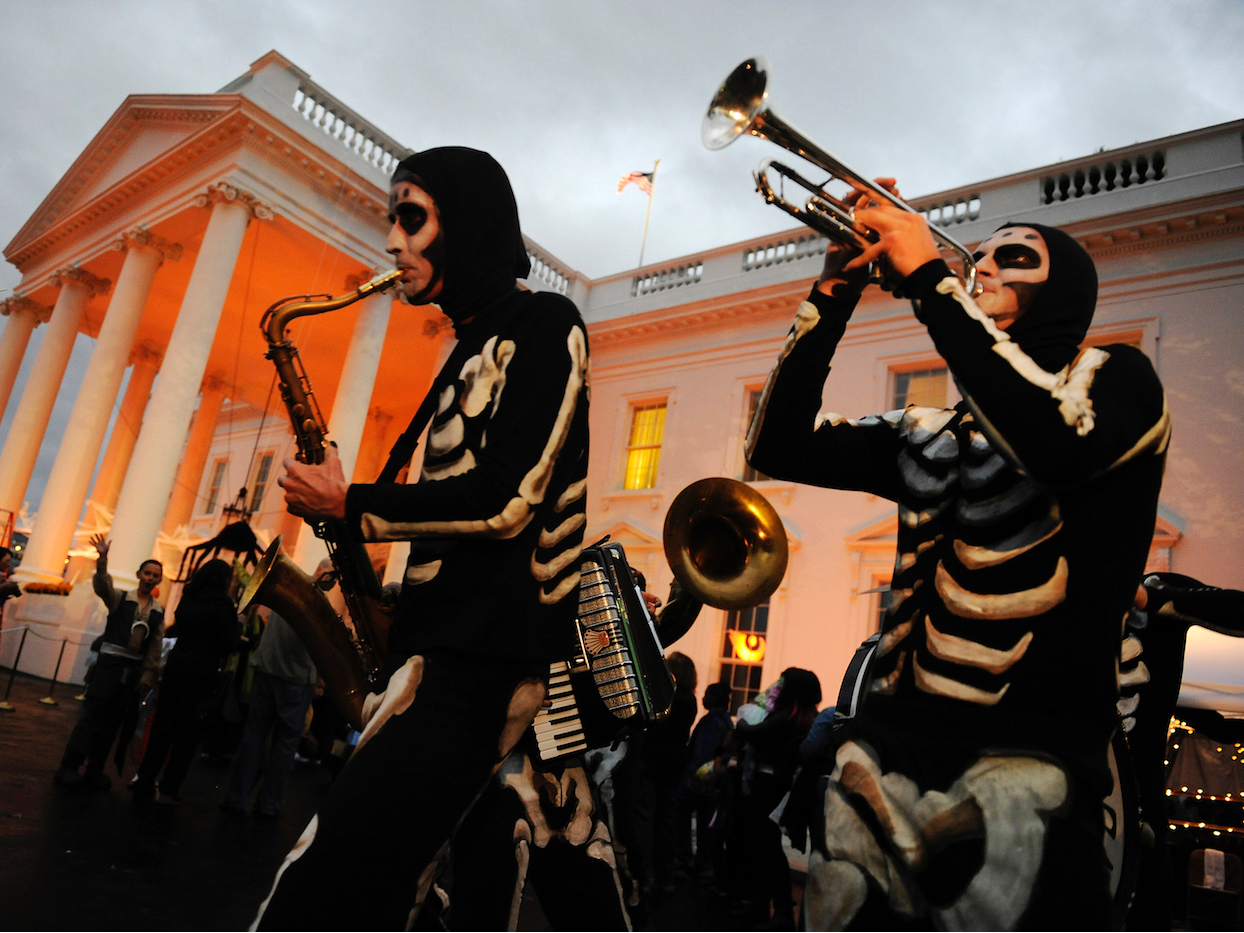 Jonathan Ernst/ReutersThe White House had all sorts of Halloween-themed activities.

Adults dressed as Dracula and Frankenstein doled out treats to costumed children in 2010. 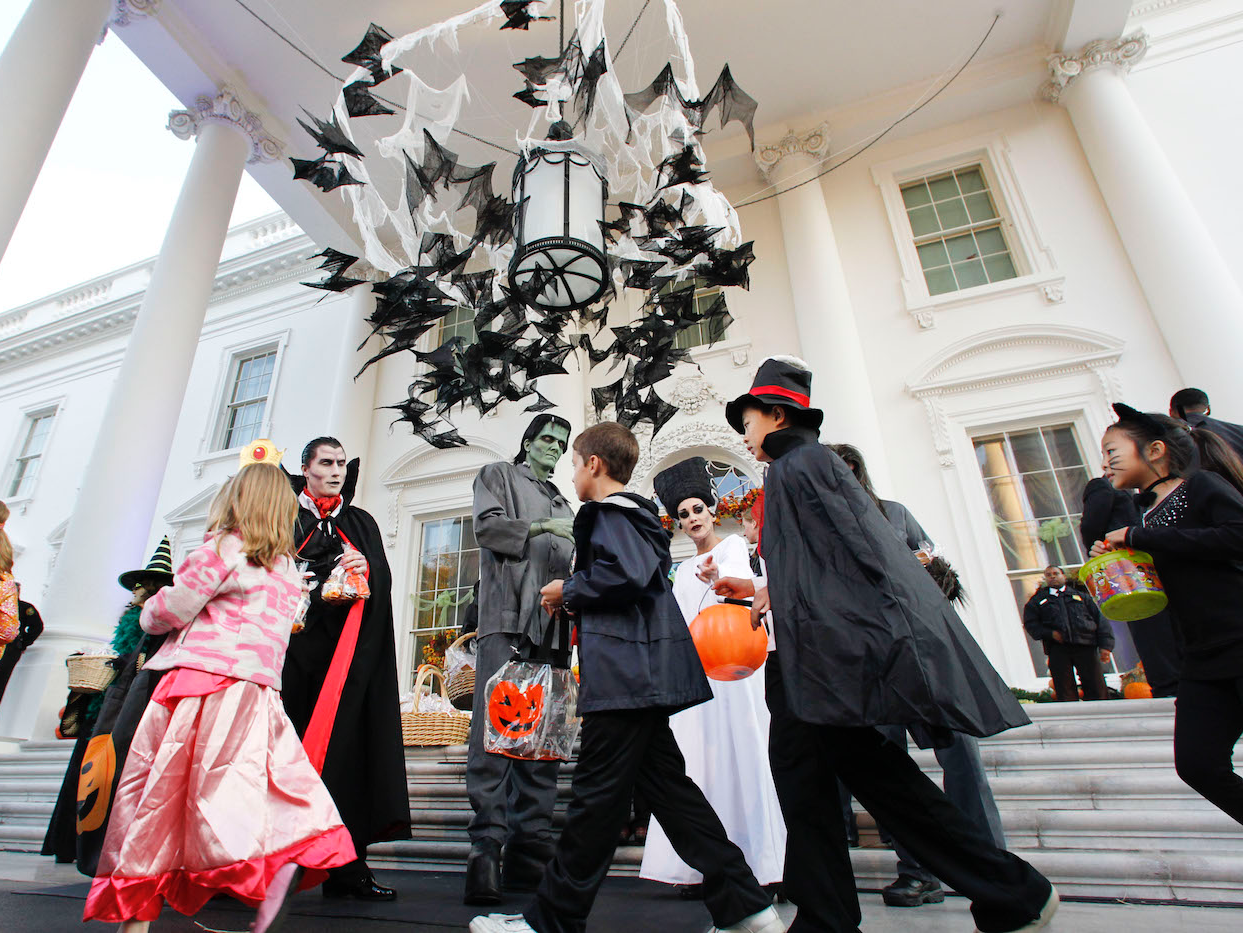 Manuel Balce Ceneta/Associated PressNo one left the party without candy.

Even though it was snowing, children from the Washington area and from military families delighted in trick-or-treating at the White House on Halloween 2011. 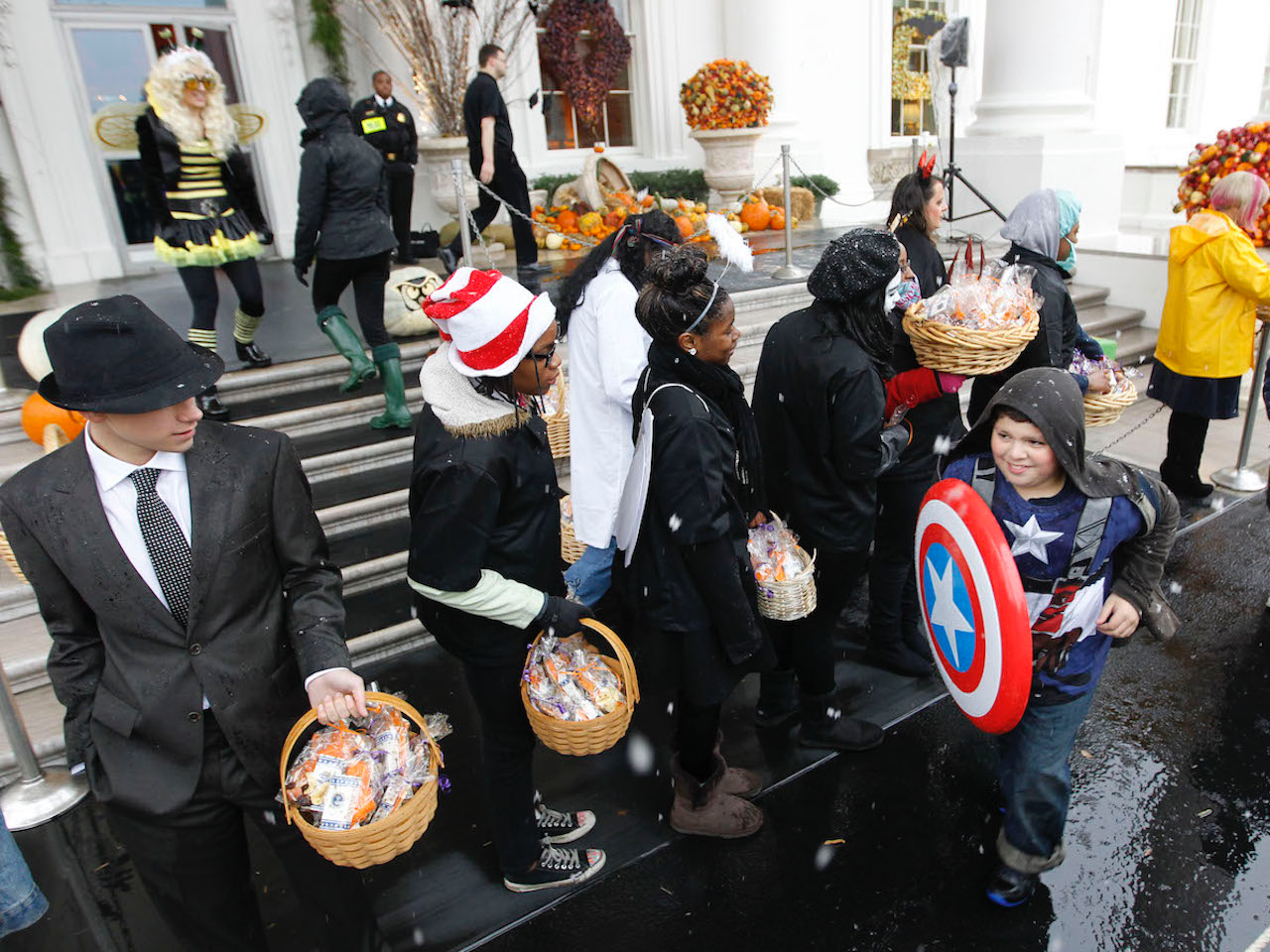 On Halloween 2013, the Obamas greeted visitors to commence the annual Halloween celebration at the White House. Halloween decorations designed to look like the “first dogs” added to the festivities. “Sunny” and “Bo,” dressed as a sunflower and a pirate, posed at the White House. 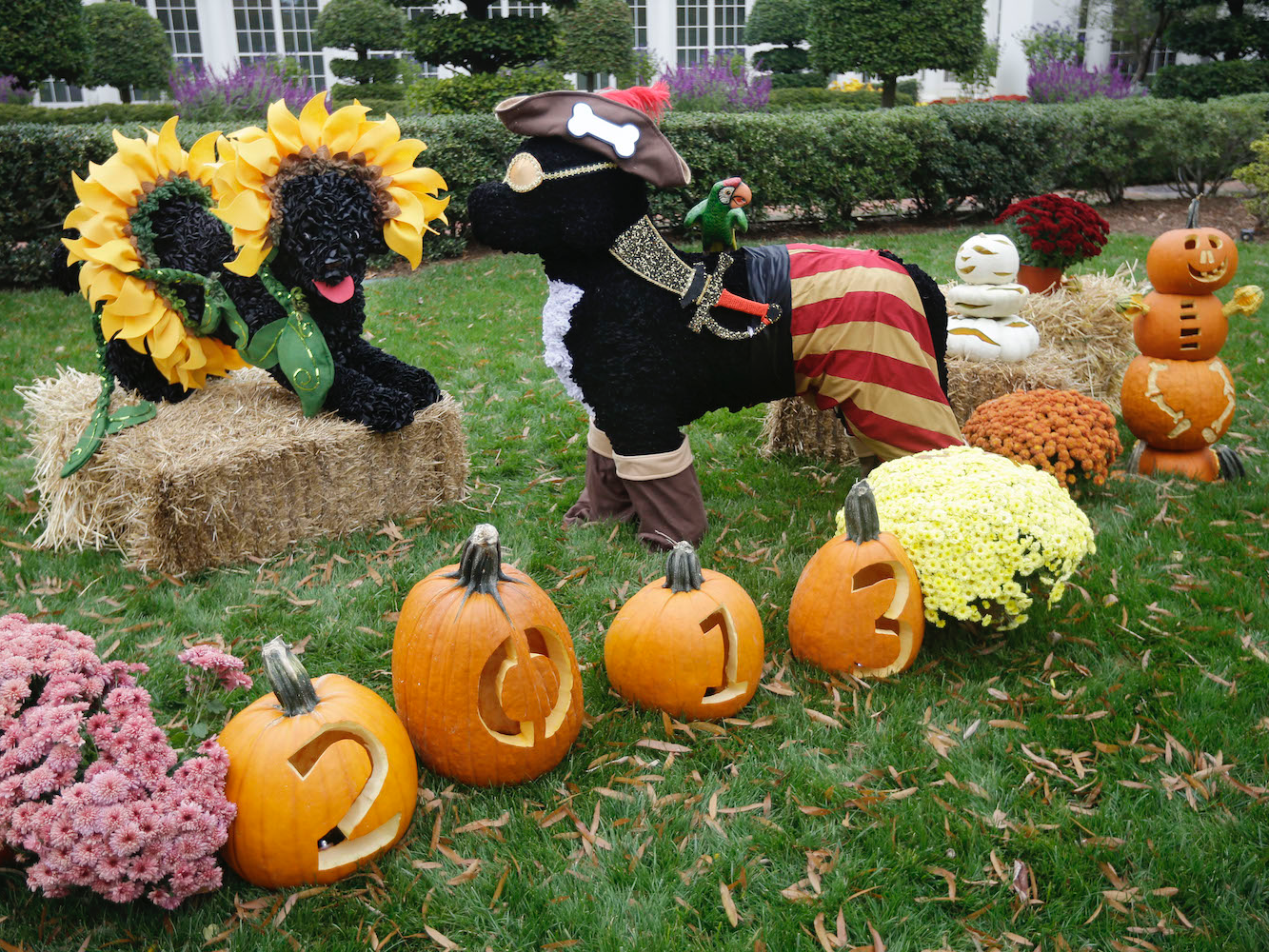 The White House was decked out in orange pumpkins on October 31, 2014. 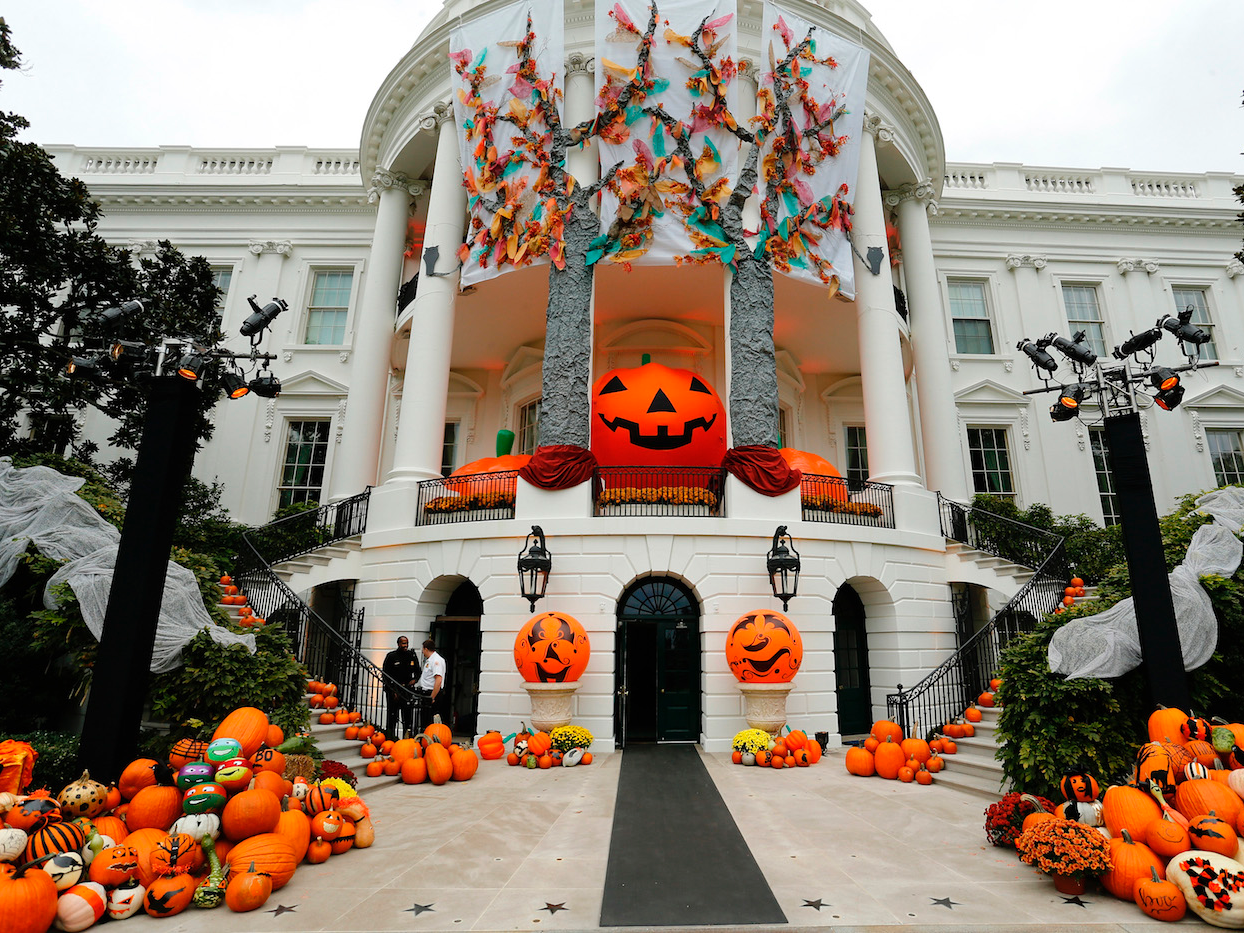 Jonathan Ernst/ReutersA large pumpkin sat in the centre of the front entrance of the White House.

Trapeze artists danced alongside children as the Obamas welcomed everyone to the White House for Halloween in 2015. 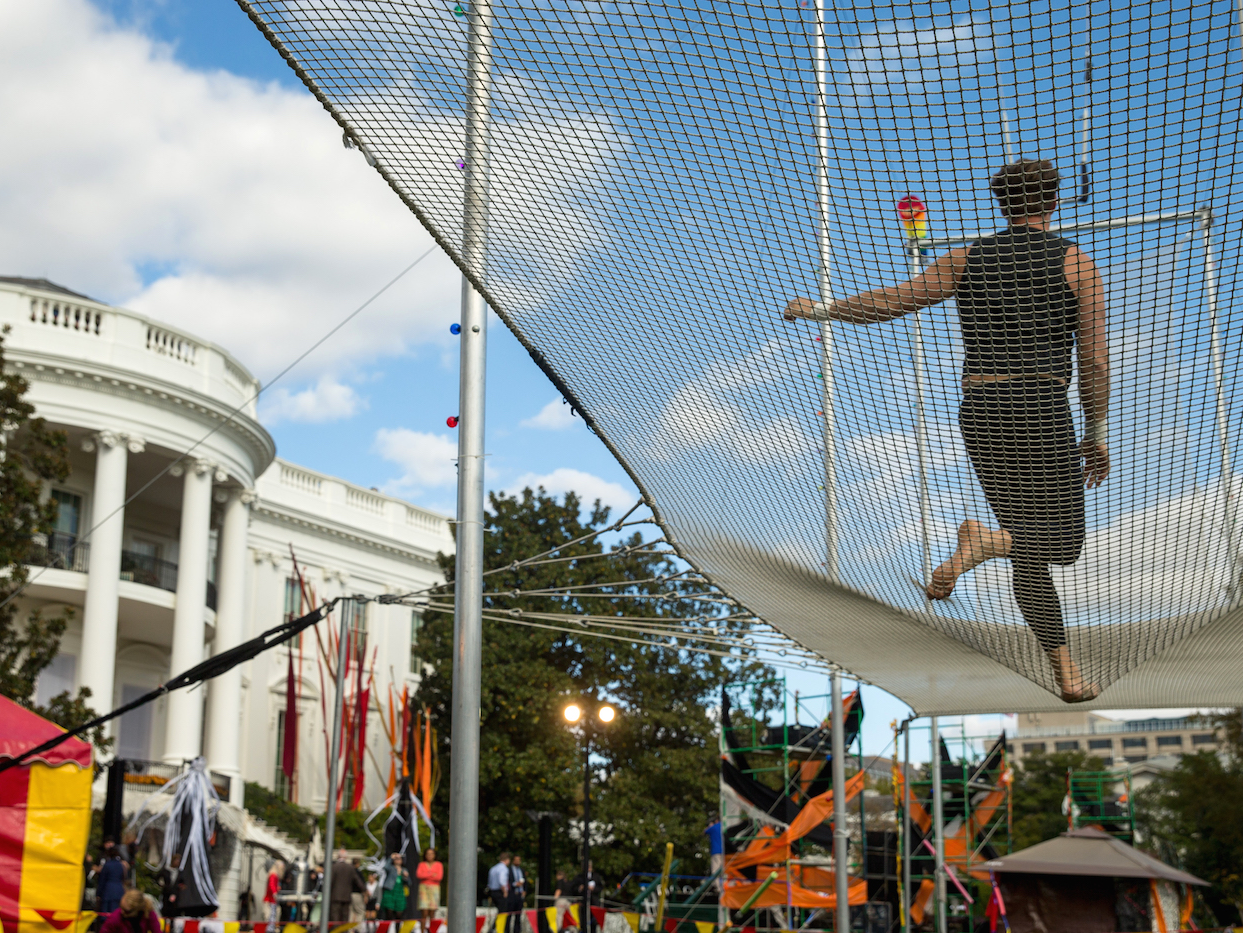 A bumble bee and some emojis took photos of Obama in 2016. 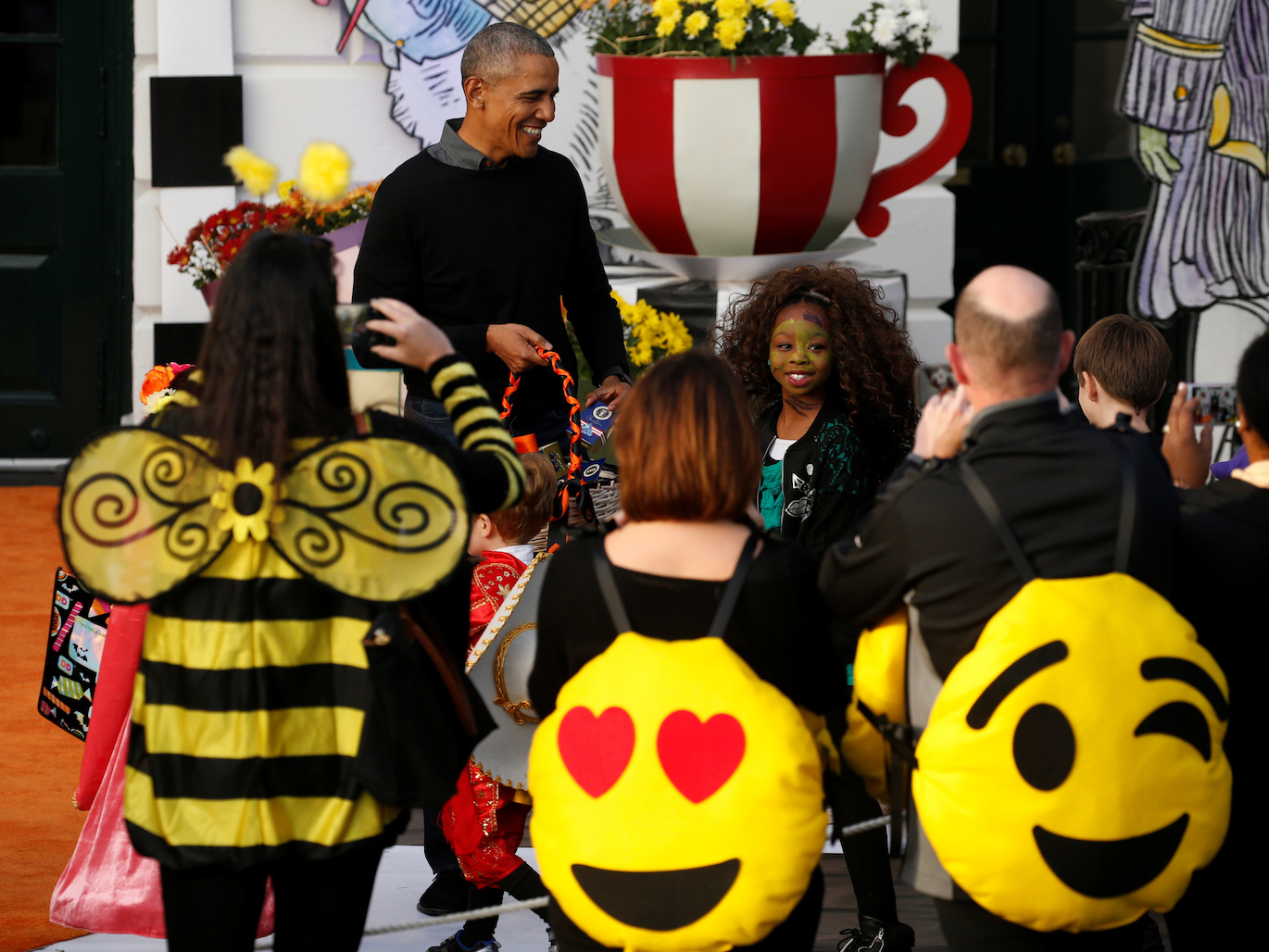 Jonathan Ernst/ReutersGuests received treats and got to take pictures with Obama.

Obama and the first lady gave out Halloween treats to children on October 31, 2016. 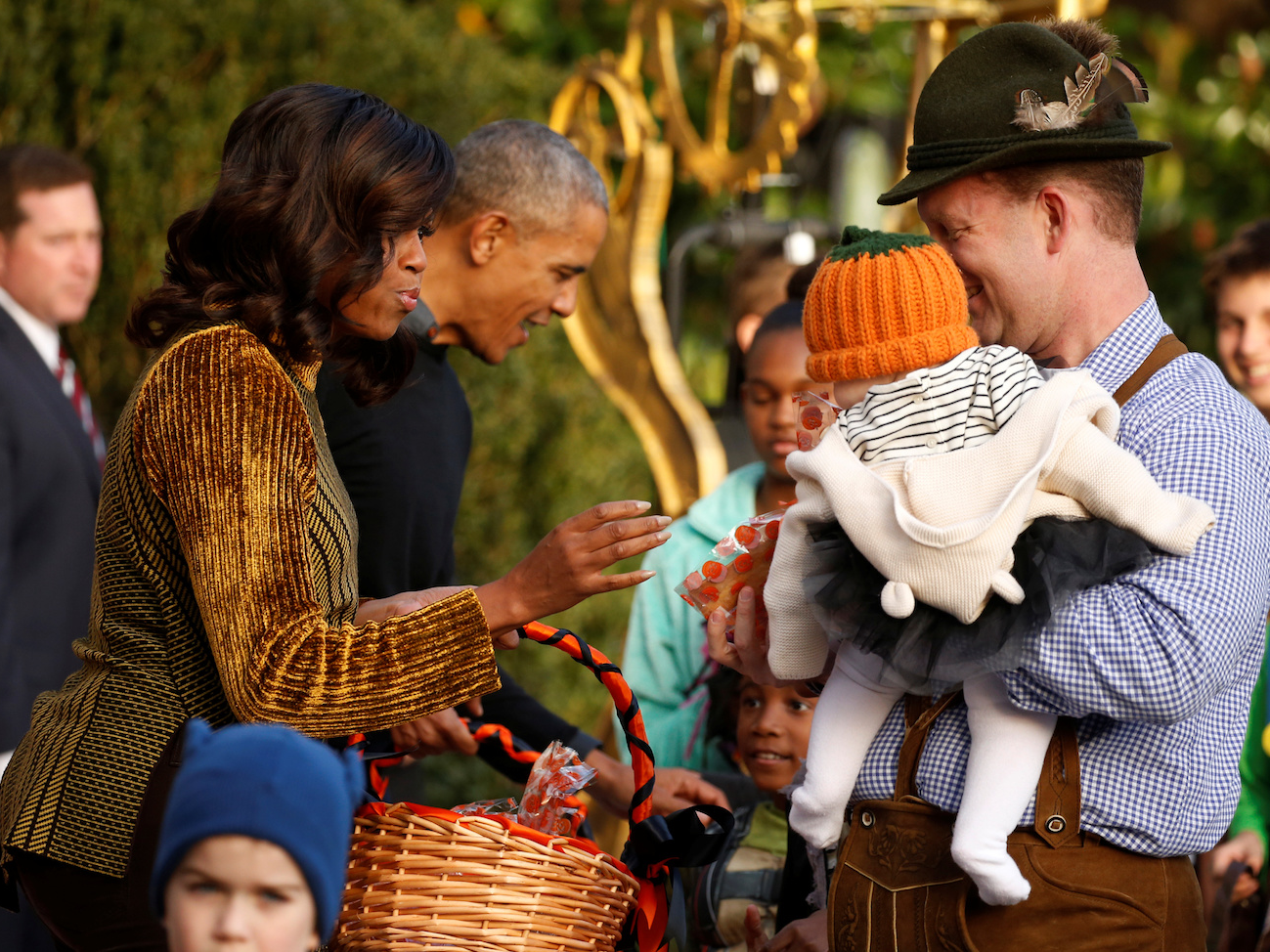 Jonathan Ernst/ReutersChildren of all ages were welcomed to the celebration, like this baby with a pumpkin hat.

Costumed children of journalists and White House staffers were invited to the Oval Office in 2017 to meet President Donald Trump. 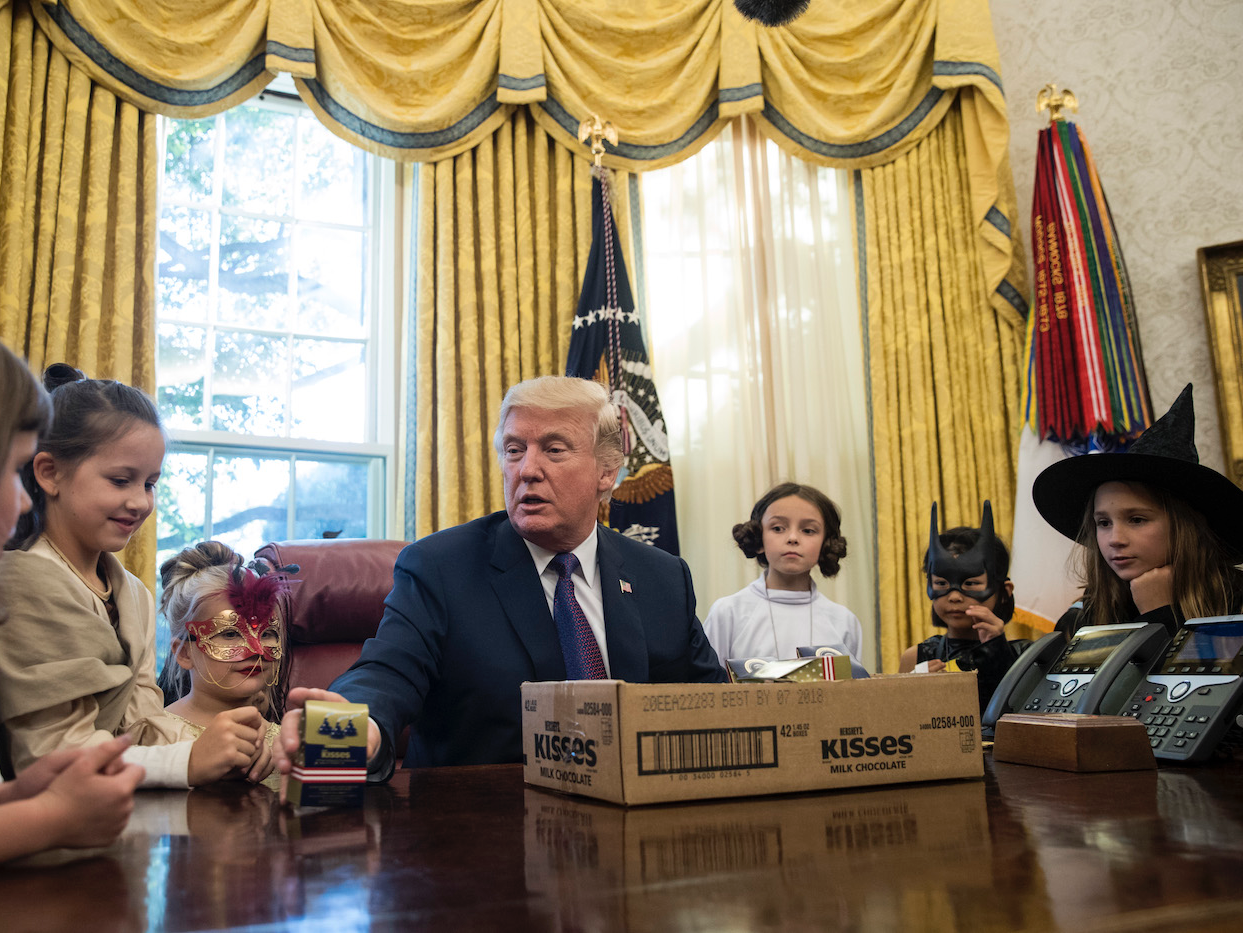 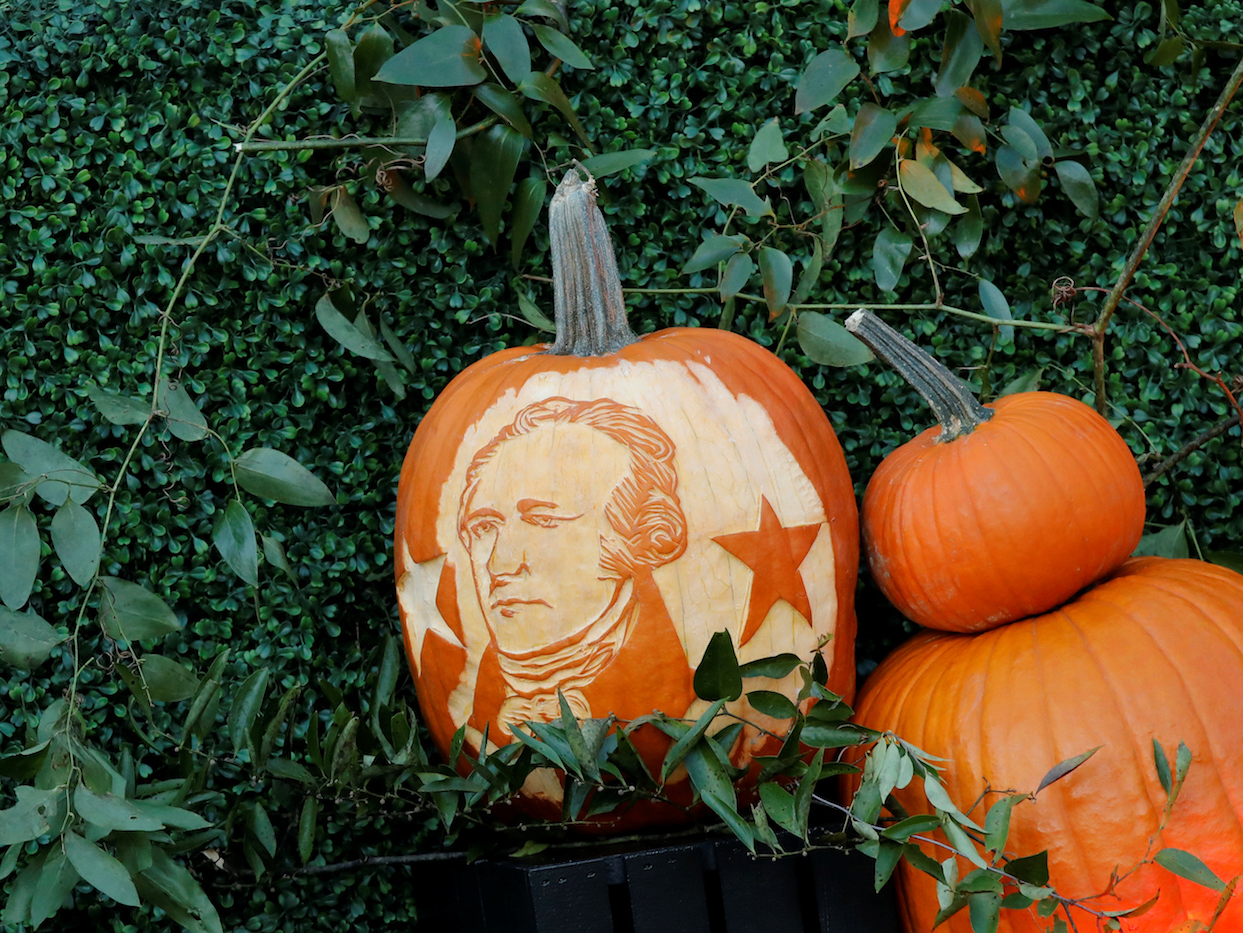 CARLOS BARRIA/ReutersThis one is of Alexander Hamilton.

As part of the 2017 festivities, children of members of the White House press corps were invited to trick or treat. 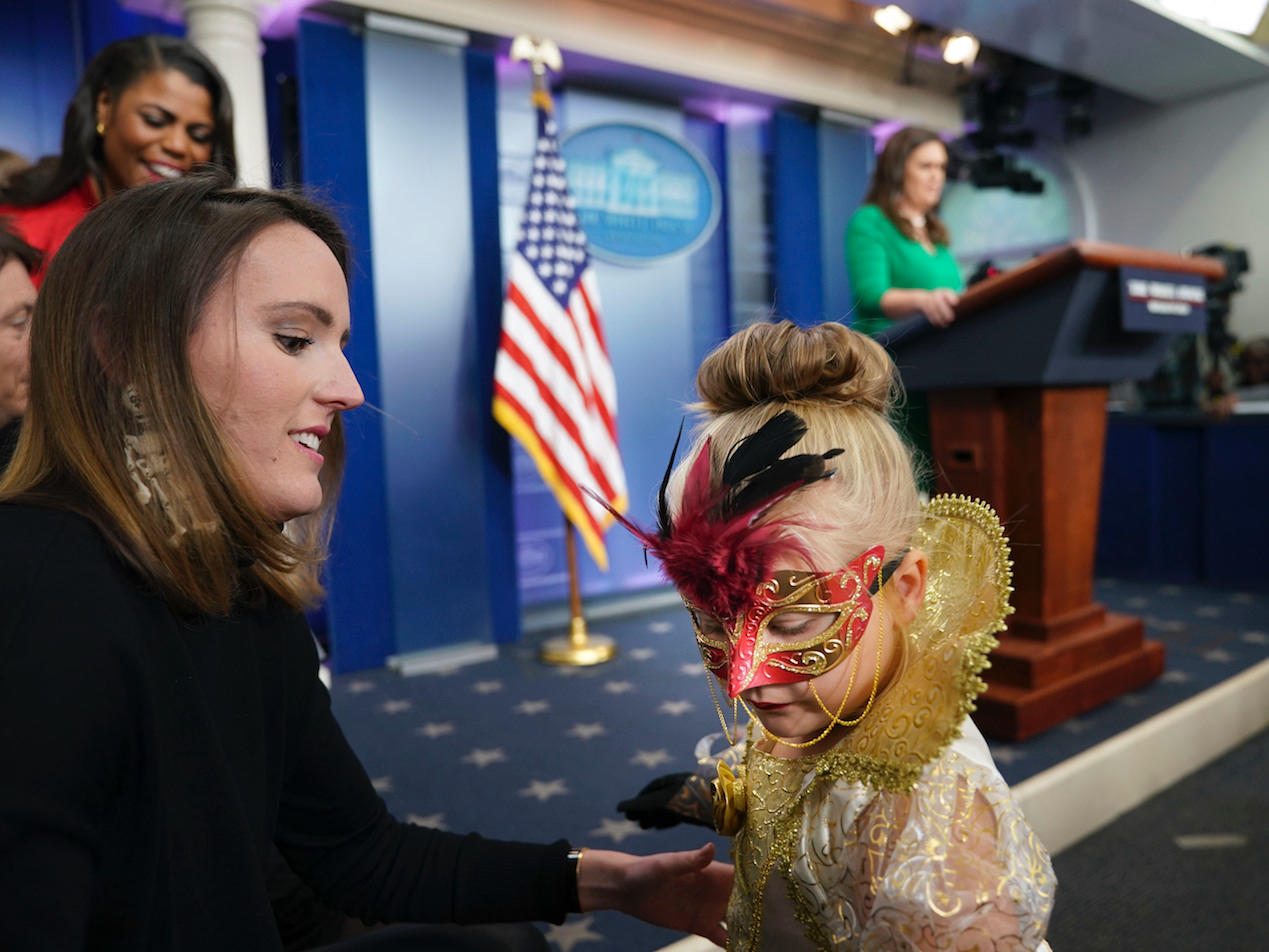 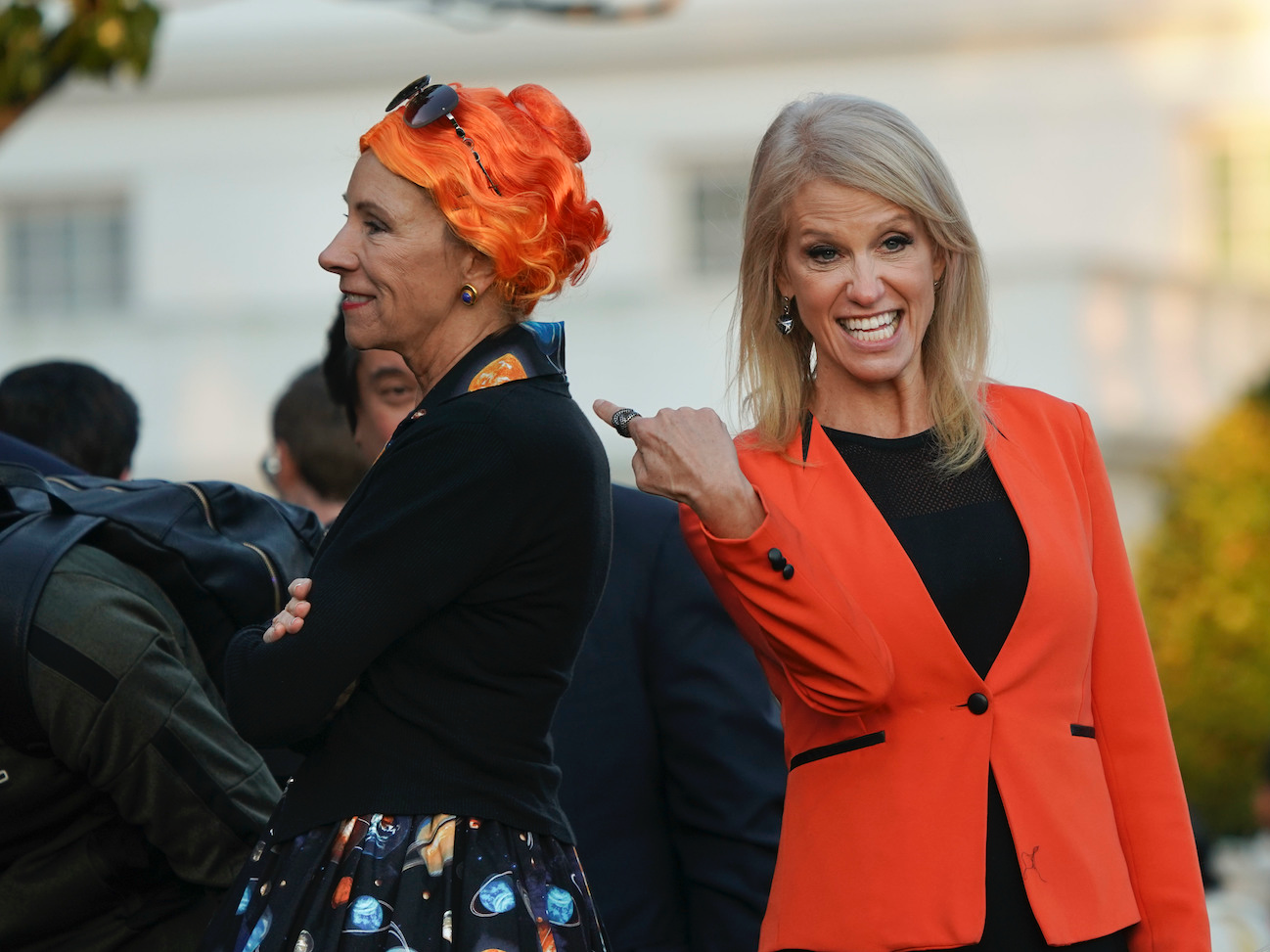 Pablo Martinez Monsivais/Associated PressEveryone was dressed in theme at the White House.

President Donald Trump and First Lady Melania Trump gave out sweets to trick-or-treating kids on the South Lawn in 2017. 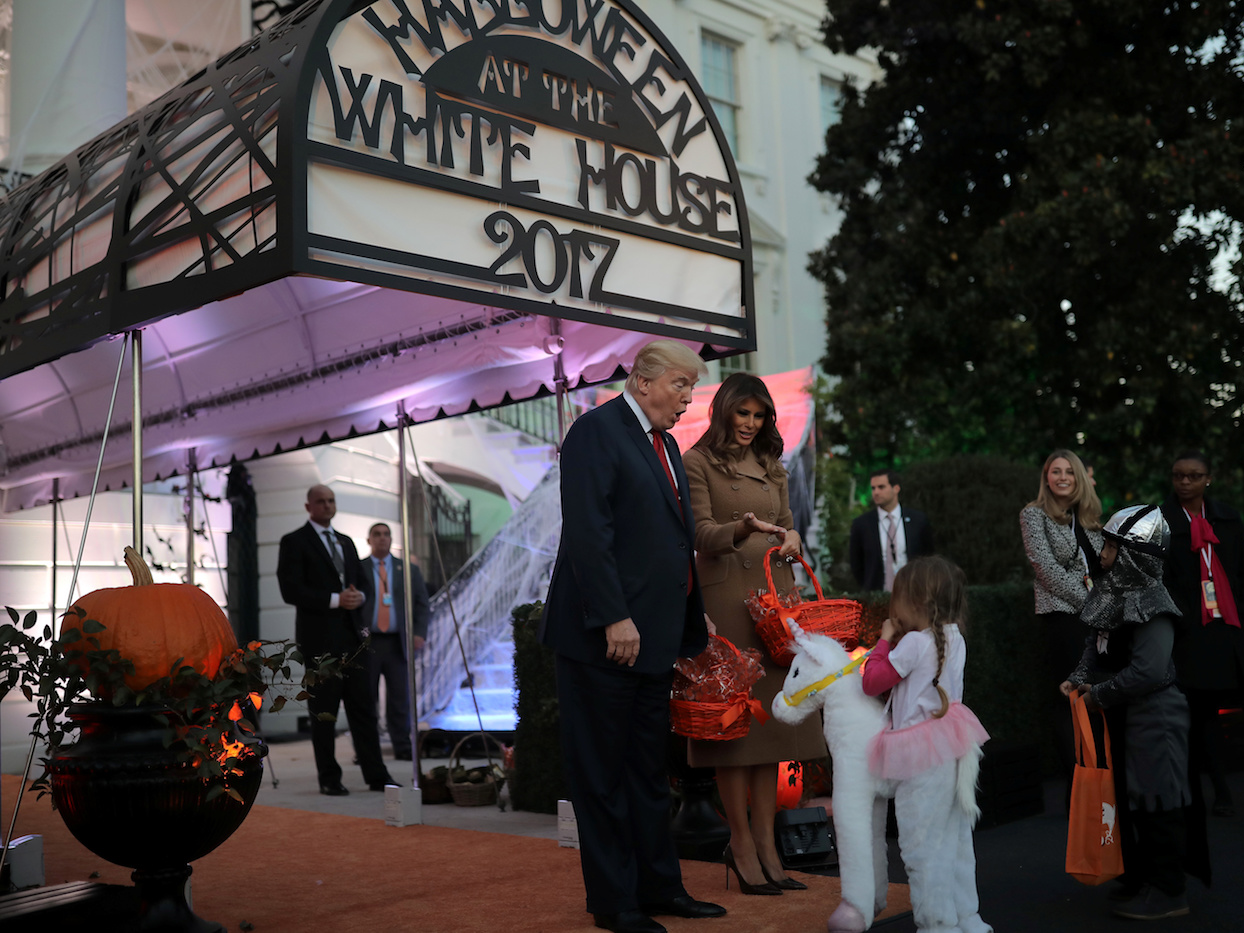 CARLOS BARRIA/ReutersHundreds of children and their families celebrated Halloween with the Trumps.

Standing next to the president, the first lady greeted a miniature firefighter with a treat from her basket on Halloween 2017. 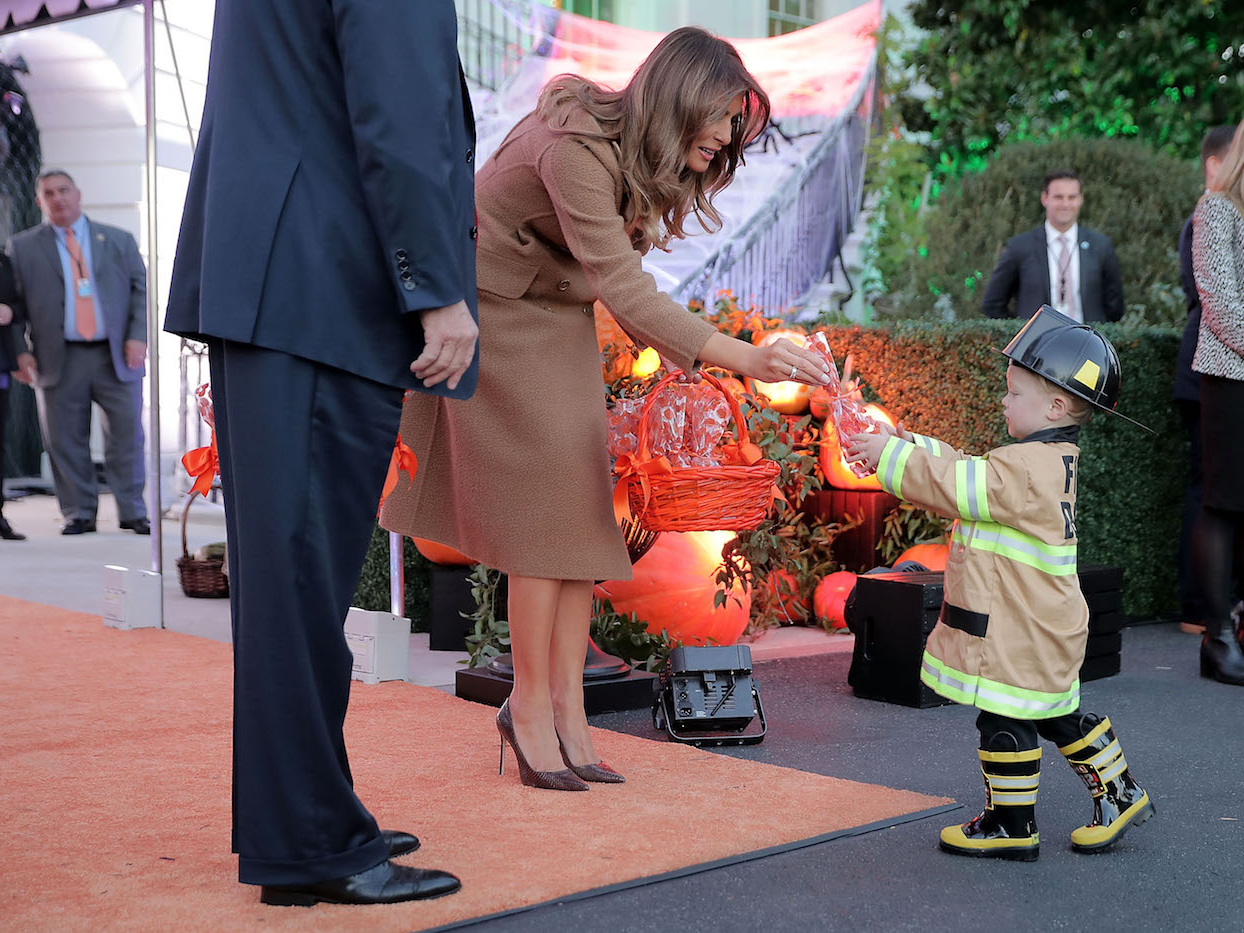 That same day, the White House looked fun and foreboding, thanks to elaborate decorations. 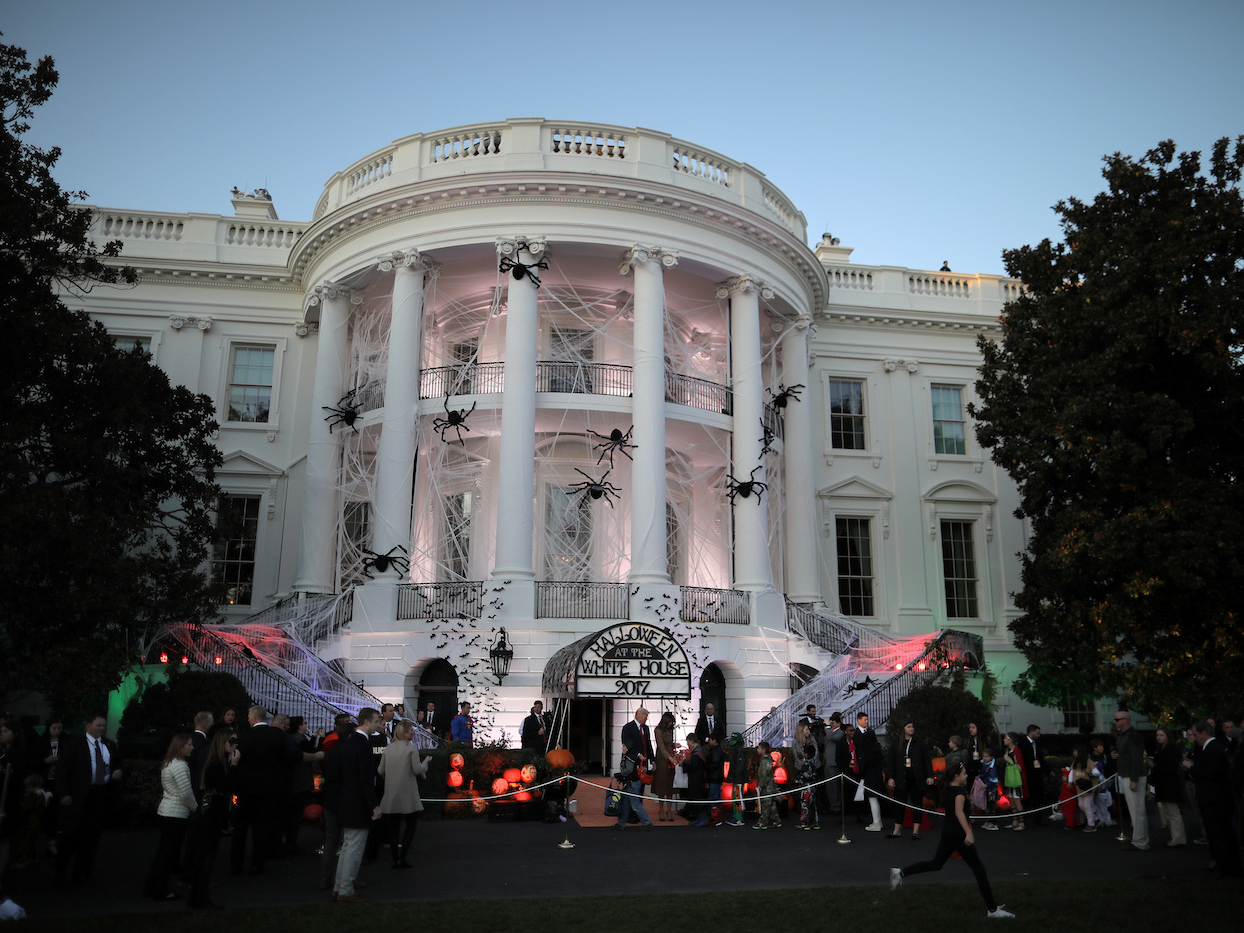 In 2018, Trump handed out candy bars featuring the presidential seal and his signature. 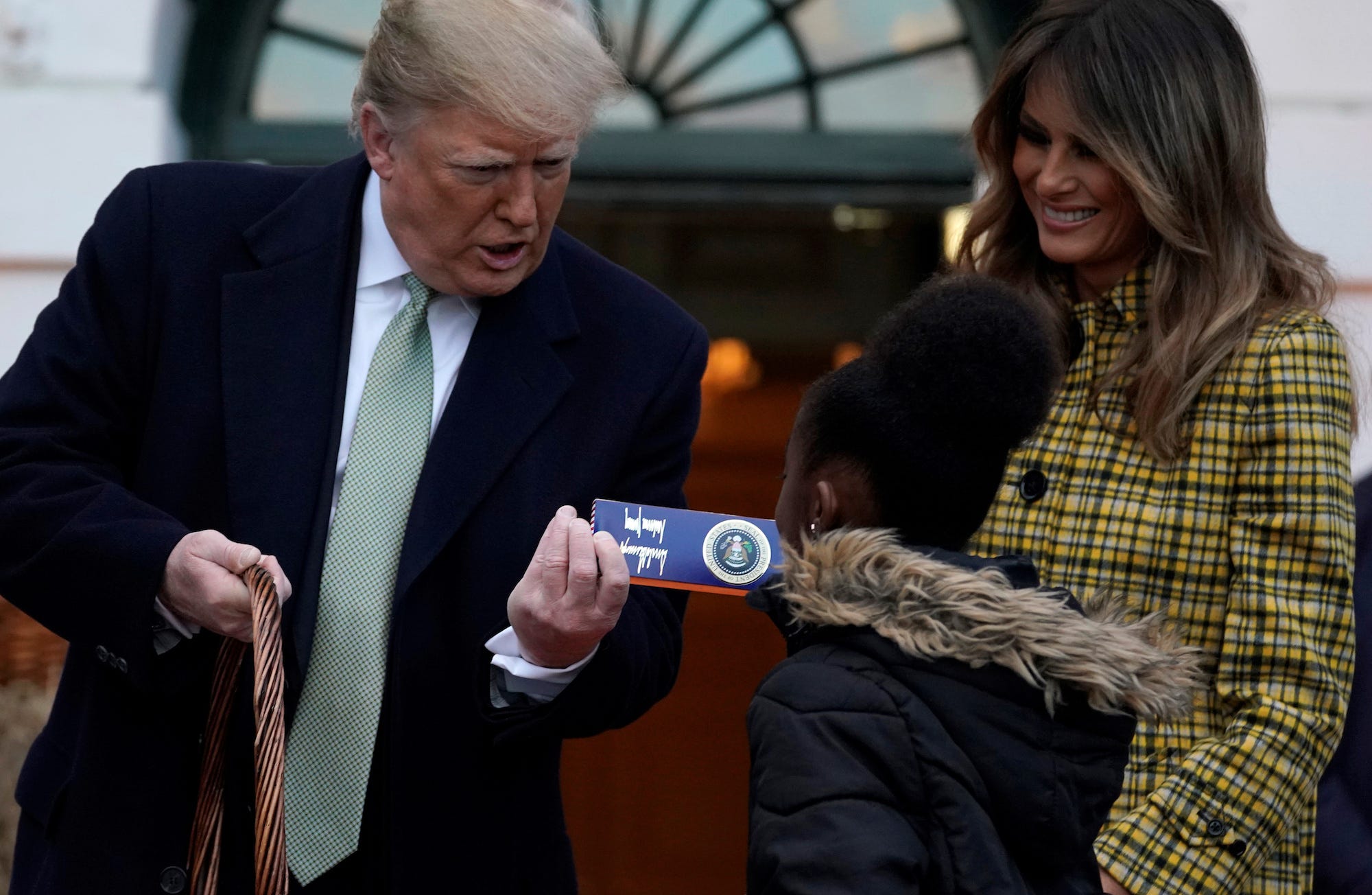 REUTERS/Joshua RobertsTrump holds up a Halloween candy with his signature before giving it to trick-or-treaters at the White House in Washington. 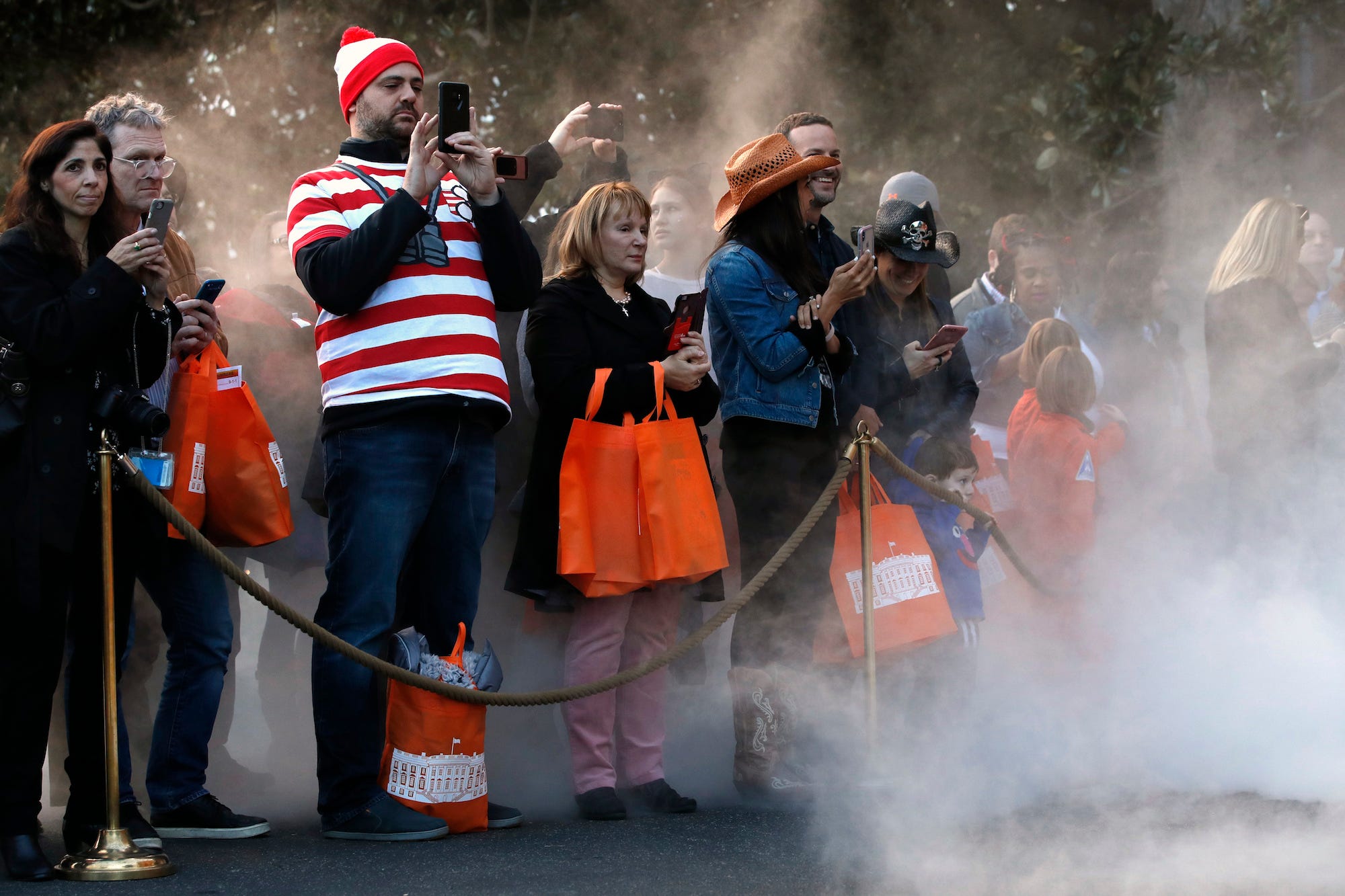 AP Photo/Jacquelyn MartinParents take photographs of their children in Halloween costumes, as mist from a fog machine rises around them, during a trick-or-treat event with President Donald Trump and first lady Melania Trump at the White House.

In 2018, children and parents were allowed entry through tickets from the Department of Education and the White House Military Office, USA Today reported.

In 2018, the White House was decorated with dozens of pumpkins, hay stacks, and colourful trees. The building’s pillars were made to look like giant corn stalks. 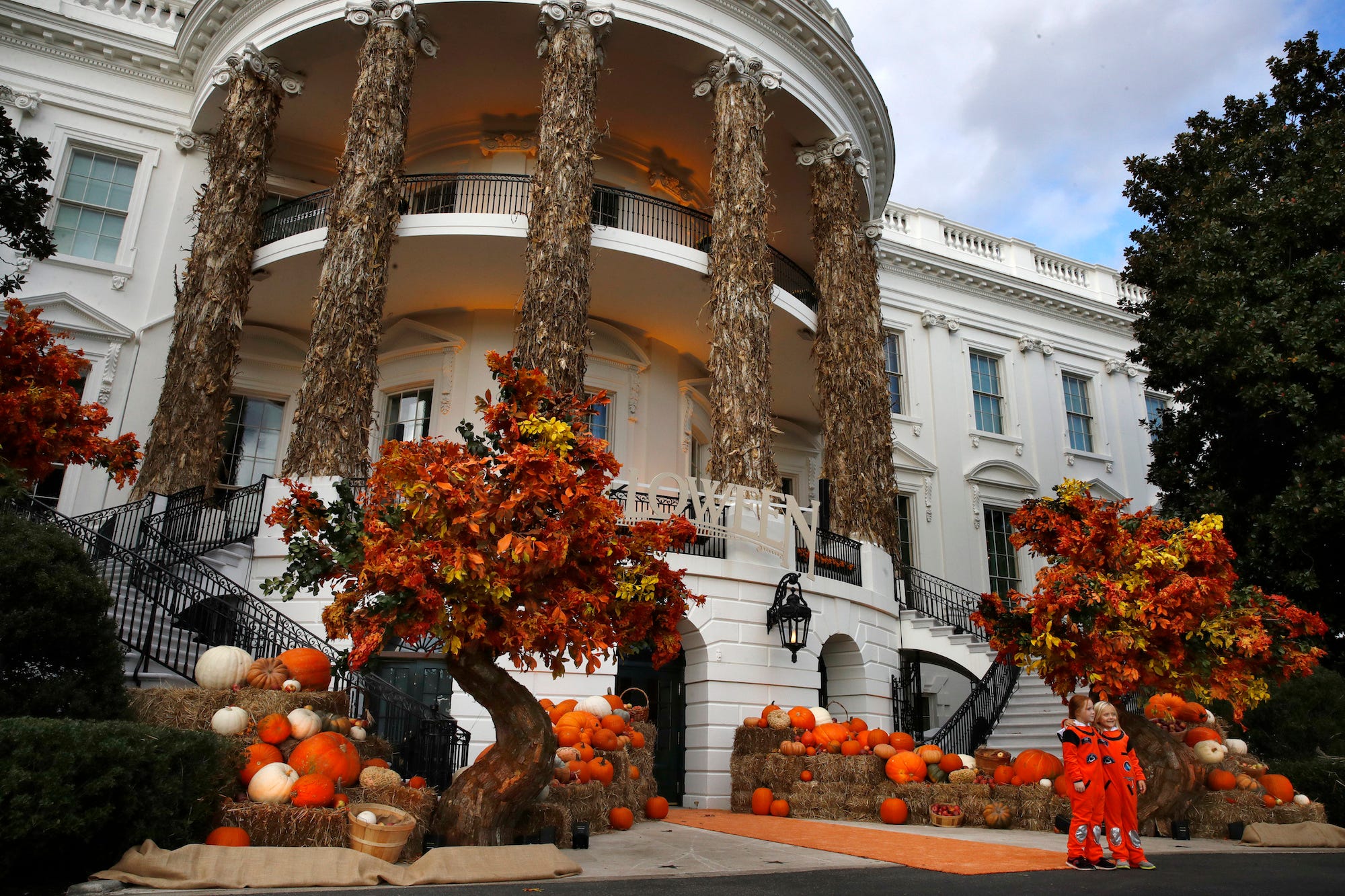 AP Photo/Jacquelyn MartinTwo girls pose for a photograph with the decorated South Portico of the White House.

Kids engaged in a bunch of spooky Halloween-themed activities on the White House South Lawn.

REUTERS/Joshua RobertsTrump puts his arm around a child dressed up as Captain America.

Rain was in the forecast for the White House Halloween celebrations in 2018, but thankfully, it held off until after the event was over. 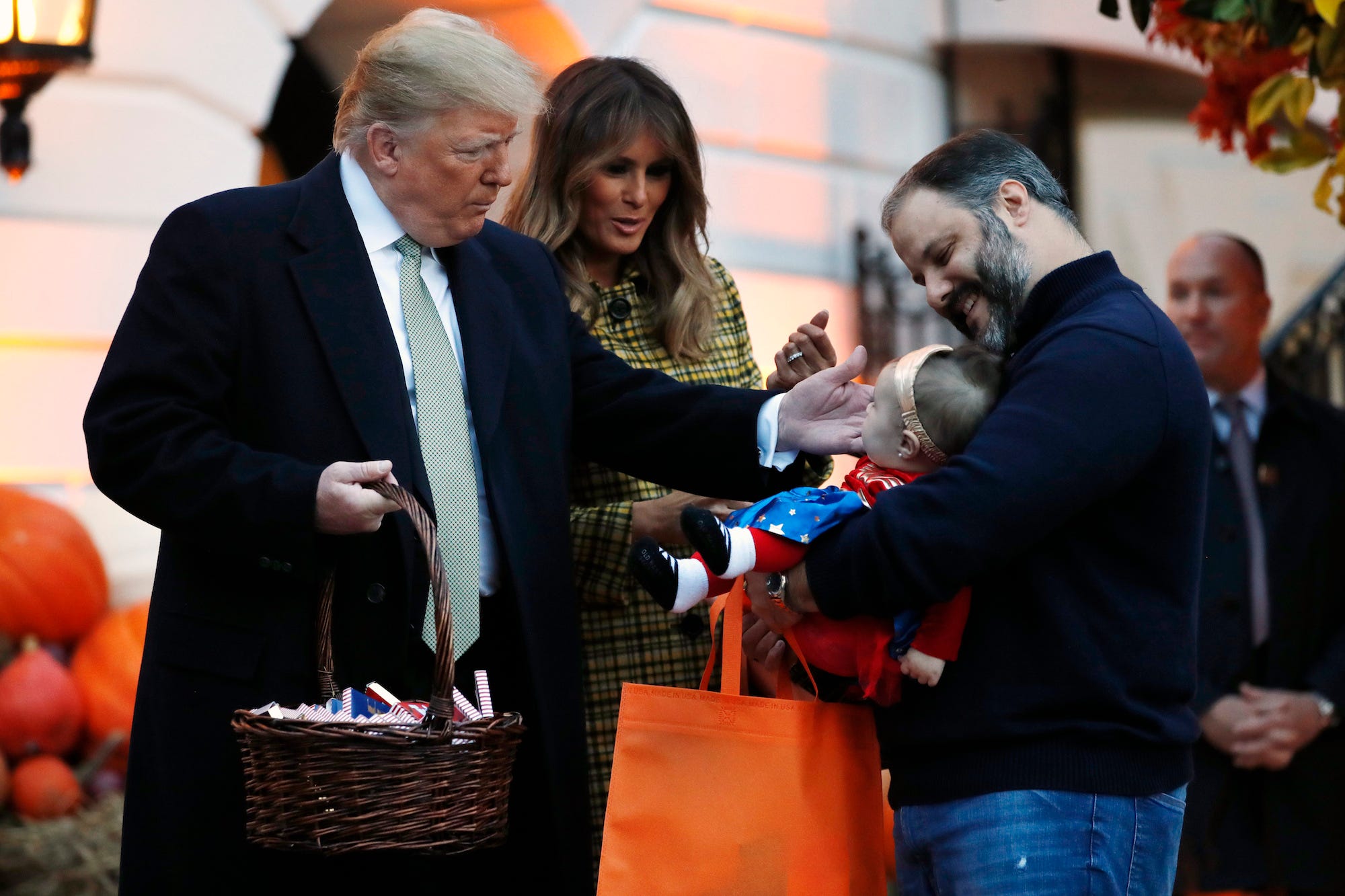 AP Photo/Jacquelyn MartinPresident Donald Trump and first lady Melania Trump greet a baby in a superhero costume as they hand out candy to children during a Halloween trick or treat event at the White House.

In 2019, the White House was decked out with pumpkins and spooky branches that lined the South Portico’s pillars.

The Trumps stood under a “Halloween” sign on an orange carpet as they offered treats to kids.

Tom Brenner/ReutersPresident Trump and first lady Melania Trump hand out Halloween candy to visiting schoolchildren in advance of Halloween at the White House in Washington.

As the Trumps handed out candy, spooky music played in the background, including “The Addams Family” theme song.

The Air Force Strolling Strings played “Thriller” by Michael Jackson, the theme song from “The Addams Family” and other Halloween-themed tunes, according to the Associated Press.

Melania Trump was seen marveling at kids’ costumes as she handed out candy in 2019.

Tom Brenner/ReutersFirst lady Melania Trump reacts to a young trick-or-treater dressed as a skeleton during the Halloween festivities.

In 2019, the Trumps again handed out a memorable Halloween token: candy bars featuring a presidential seal.

Tom Brenner/ReutersA child carries boxes of chocolate handed out by President Donald Trump and first lady Melania Trump during a Halloween event at the White House.

For 2020, the White House is putting safety measures in place to prevent the spread of COVID-19 at their annual Halloween celebration. 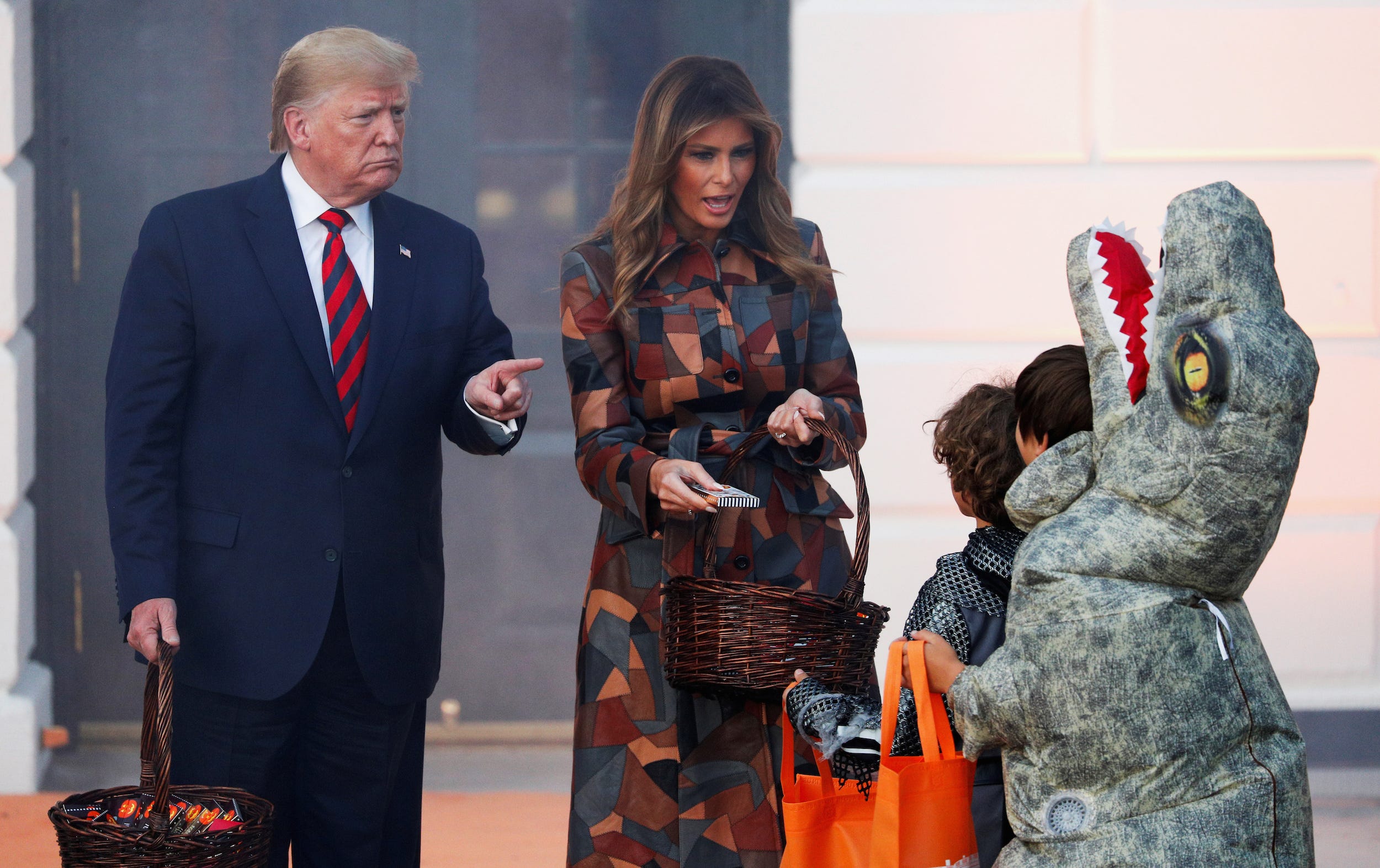 Because of the novel coronavirus pandemic, the White House is handling Halloween a little differently in 2020.

The event, taking place on October 25, will include social distancing and a number of precautions to help prevent the spread of COVID-19.

Melania Trump said in a statement ahead of the event that all guests over the age of 2 years old would be required to wear masks, and staff, who will also be wearing masks, will have to wear gloves while handing out candy.

The White House will also offer hand sanitizer throughout the event space, the first lady said.

Several federal departments are taking part in the event, per usual, but this year’s attendees will have to follow a “no touch” policy when offering activities and handing out products.

This year, Melania Trump is also inviting the families of frontline workers.