Half of all travel-related jobs in the US could be eliminated by the end of April, according to a new report 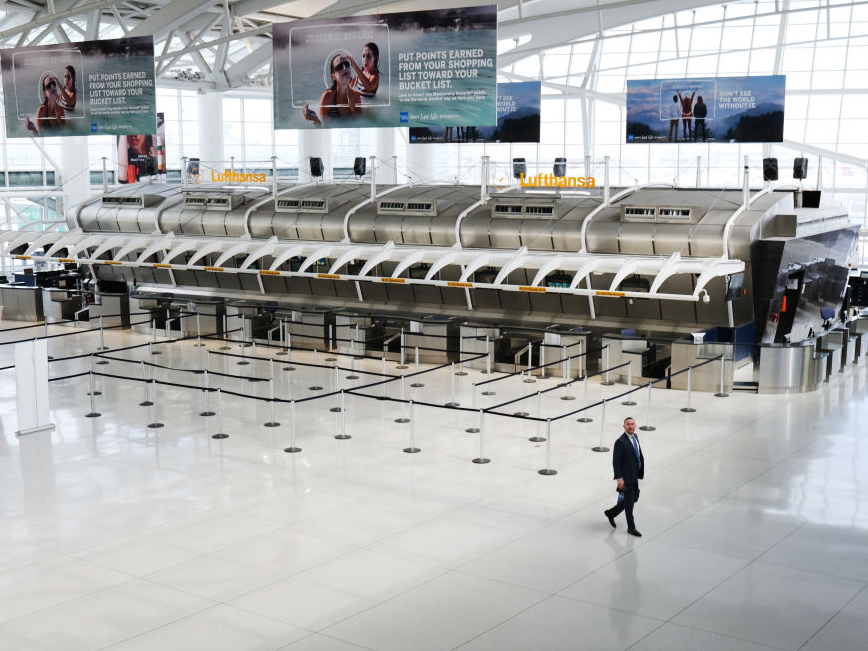 Spencer Platt/Getty ImagesJohn F. Kennedy Airport stands mostly empty on April 16, 2020 in New York City. While some national and international flights are still departing and arriving, many flights have been cancelled due to a lack of passengers and restrictions on global travel.

Last month, Chip Rogers, the president and CEO of the American Hotel & Lodging Association (AHLA), likened the coronavirus’ impact on the hospitality industry to the impact of 9/11 and the 2008 recession combined.

Now, a new report by Oxford Economics suggests the impact of the coronavirus will be “more than nine times the impact of 9/11 on travel sector revenue.”

The report projects that 6.9 million US jobs will be eliminated this month due to travel declines, resulting in a total loss of 8 million travel-related jobs by the end of April. That’s over half of the 15.8 million American jobs the US Travel Association (USTA) says are typically supported by travel expenditures.

Oxford Economics also estimates that declines in US domestic and international tourism will result in a $US1.2 trillion loss in economic output that could launch the US economy into a recession lasting “at least two quarters.”

While the $US2 trillion federal CARES Act has provided relief for the travel sector, USTA President and CEO Roger Dow is among a small army of hospitality leaders to point out that it is not enough.

“The CARES Act was a good start, but the data shows there is still extreme and mounting pain in the American travel industry,” Dow said in a company release. “We’re appealing for fixes, the addition of more relief, faster rules, and greater flexibility.”

The limited scope of the Small Business Administration’s Paycheck Protection Program (PPP) is a central issue around which leading hospitality organisations, including USTA and the AHLA, rallied in an April 8 policy request document submitted to Congress.

“The PPP is expected to run out of funding within the next several weeks and the covered period for the program ends on June 30, 2020,” hospitality leaders wrote. “It’s clear that extended public health restrictions and a slow return to normal work, public gathering and travel patterns will result in small businesses having limited customers and revenue far beyond June 30.”

Requested policy changes include an additional $US600 billion for PPP to ensure that the program is funded through December 2020 and the ability for small businesses to request up to three PPP loans.

“We need immediate action to update the CARES Act and increase the limit on SBA loans,” Rogers said after AHLA sent a separate letter to Congress on April 8. “The current limit will not allow a business owner to meet both payroll and debt service obligations beyond an estimated 4 to 8 weeks. Consequently, it will result in continued layoffs of the very workers the bill seeks to protect.”