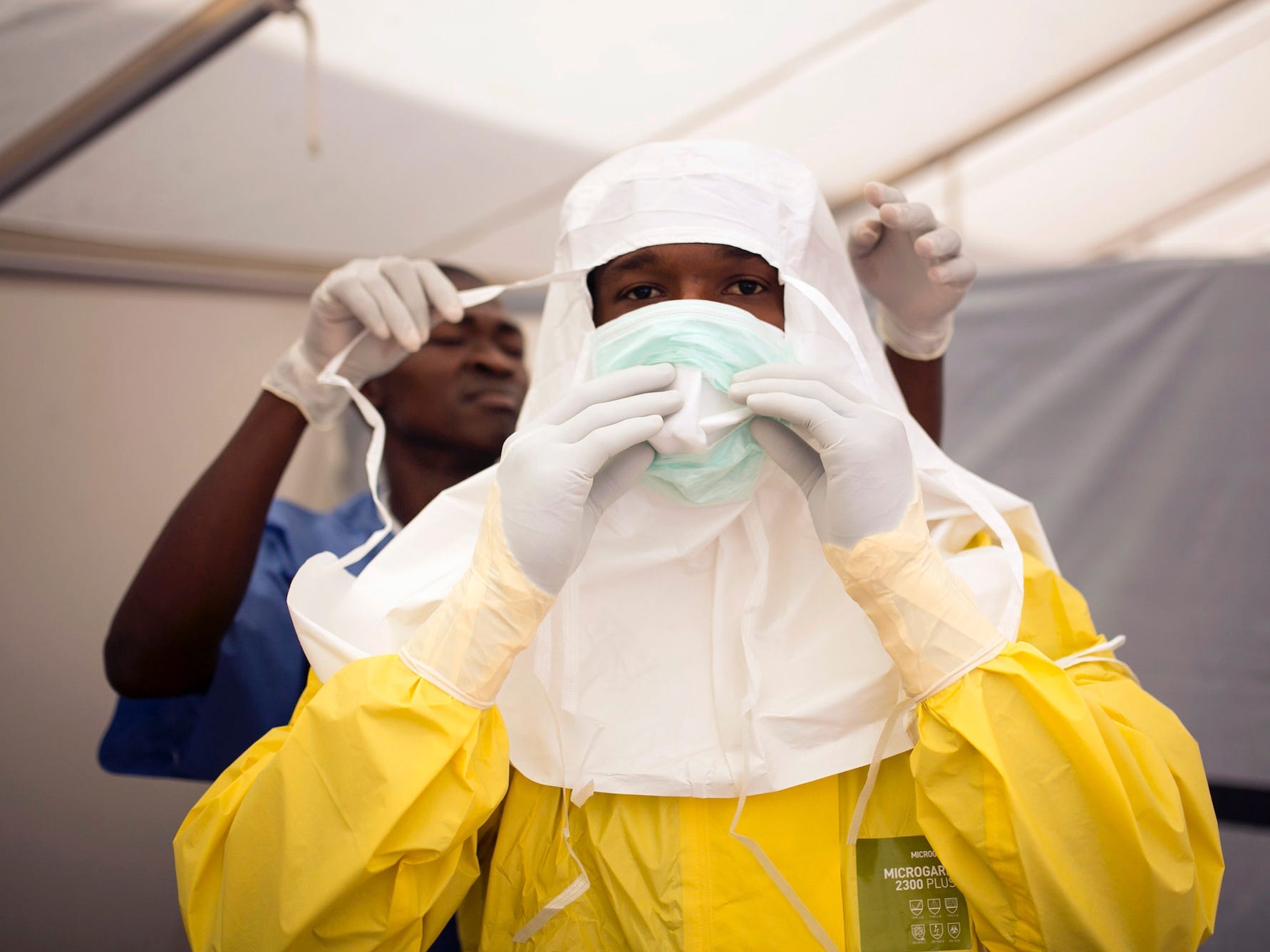 Baz Ratner/ReutersHealth workers put on protective gear before entering an Ebola quarantine zone at a Red Cross facility in the town of Koidu, in Eastern Sierra Leone, December 19, 2014.

Guinea has declared an Ebola outbreak for the first time since 2016, when a two-year outbreak in West Africa finally ended after killing more than 11,000 people.

The new outbreak, in the town of GouÃ©ckÃ©, has already killed three â€” two women and a man. They were among seven people who attended a nurse’s funeral on February 1 and later came down with diarrhoea, vomiting, and bleeding. All seven cases have now been confirmed as Ebola virus.

The four people who are still alive have been isolated and contact tracing has begun, Guinea’s health ministry, Agence Nationale de SÃ©curitÃ© Sanitaire (ANSS), said in a Facebook post on Sunday.

Ebola can cause fever, aches, and fatigue before progressing to “wet” symptoms like vomiting, diarrhoea, and haemorrhaging. On average, its fatality rate is about 50%.

The virus spreads through the bodily fluids of a sick or recently deceased person. Certain body fluids, like semen, can still transmit the virus after an infected person has recovered from their illness, according to the US Centres for Disease Control and Prevention. Infected animals, like bats or primates, can transmit the virus to humans and spark new outbreaks.

“The resurgence of Ebola is very concerning for what it could do for the people, the economy, the health infrastructure,” Dr. Krutika Kuppalli, an assistant professor of medicine for infectious diseases at the Medical University of South Carolina, told The Associated Press.

“We’re still understanding the repercussions of the (last) outbreak on the population,” she added.

Kuppalli was the medical director of an Ebola-treatment unit in Sierra Leone during the 2014-2016 outbreak, which began in Guinea then spread to Liberia and Sierra Leone. More than 28,000 people contracted the virus during those years, according to the CDC.

This is West Africa’s first outbreak since then. The Guinean government says it is rushing to quash the resurgence, build a new Ebola treatment centre, and accelerate distribution of the Ebola vaccine. 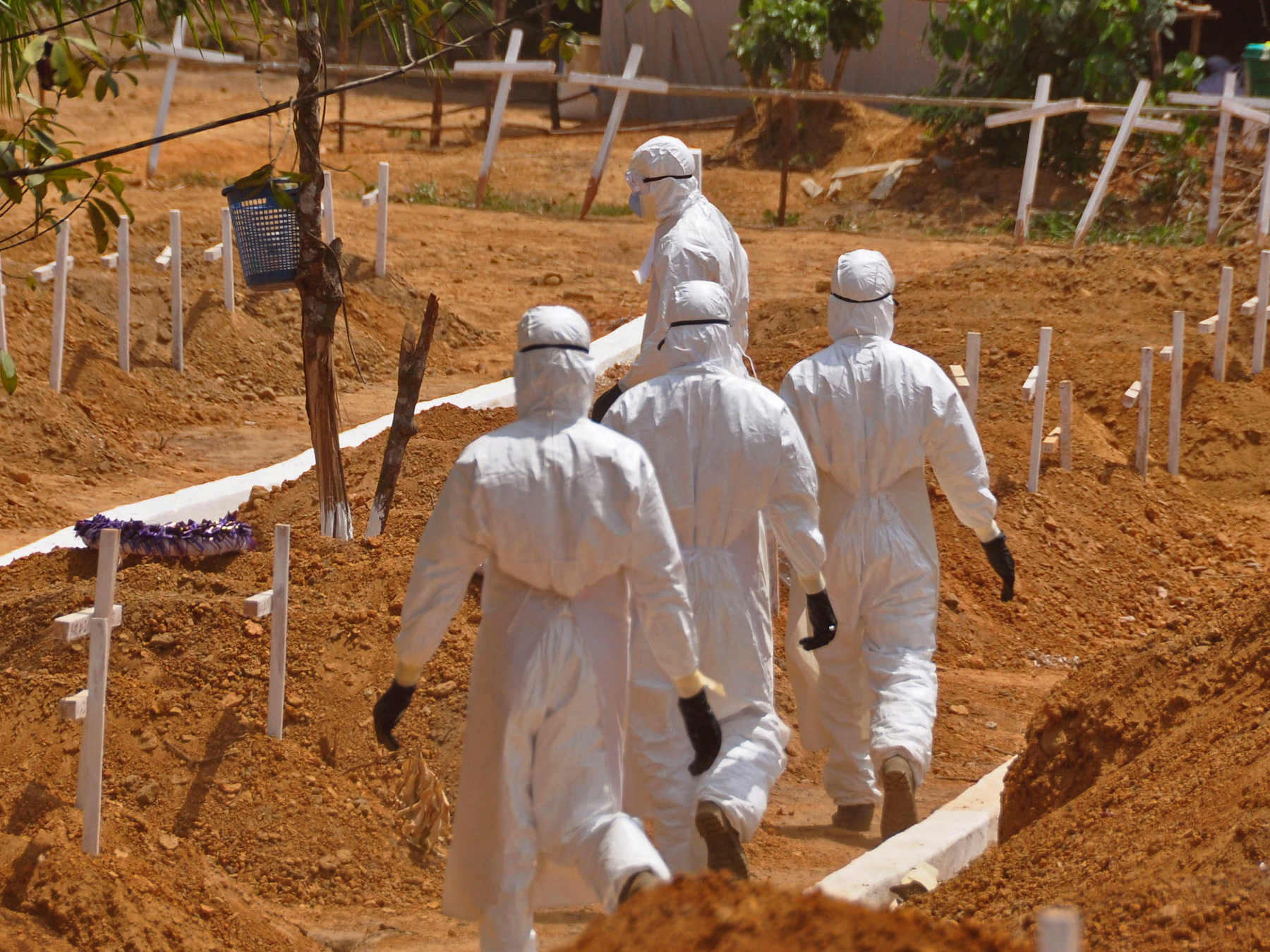 Abbas Dulleh / APHealth workers walk inside a new graveyard for Ebola victims, on the outskirts of Monrovia, Liberia, March 11, 2015.

“The government reassures the people that all measures are being taken to curb this epidemic as quickly as possible,” the ANSS said in its Facebook post.

Dr. Matshidiso Moeti, the World Health Organisation’s regional director for Africa, said on Twitter that she was “very concerned” by the new outbreak and that the WHO was also “ramping up readiness & response efforts.”

Since 2016, new Ebola outbreaks have only appeared in the Democratic Republic of the Congo, including one that was particularly deadly from the summer of 2018 to the summer of 2020. More than 2,000 people died during that resurgence.

The Congo reported another outbreak of the virus last week. It seems to be unrelated to Guinea’s new cases.