Groupon had its worst-ever day on the stock market as shares hit an all-time low.

Shares traded as low as $US1.70, a 44.26% decline on the previous day’s closing price. The selloff comes after the company released a dismal earnings report and said it would retreat from its Goods services.

Groupon reported $US612.316 million in revenue, compared to the $US704.875 million analysts expected, according to Bloomberg data. Earnings were 7 cents a share, less than half of the 15.1 cents a share Bloomberg analysts estimates predicted. Eighty-one million shares traded Wednesday, nearly 12 times normal volumes.

It’s a sharp end to the 29.79% rally the stock saw this year through Tuesday’s close. Investors had bet Groupon could turn its performance around in 2020, Bloomberg reported.

Those hopes were dashed with the slew of bad news the company reported Tuesday. Groupon will exit its e-commerce platform, Goods, which made up more than half of its total revenue in 2019. But gross profit from the Goods business fell 45% in the last quarter of the year, the company said, adding that it will now focus on offering local experiences instead.

Groupon’s board also approved a reverse stock split, which, pending shareholder approval, would happen at a ratio between 1 for 10 and 1 for 12 and take effect by the end of the second quarter. 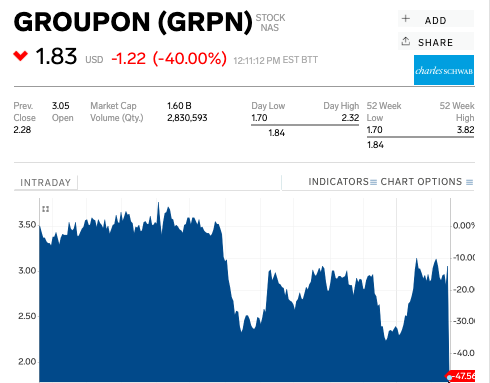