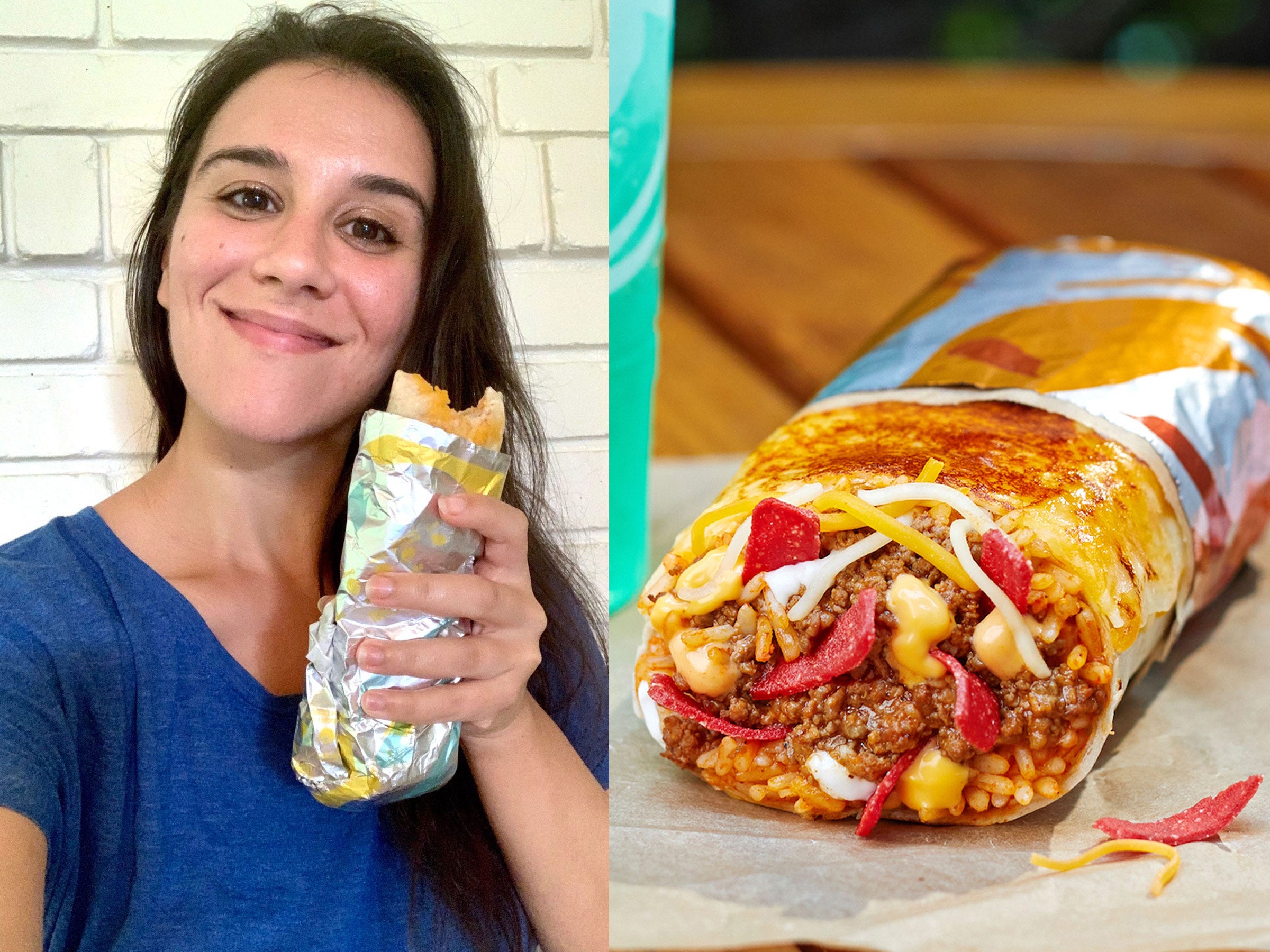 From testing out the world’s first cheese conveyor belt to sampling the world’s best cheese, you could say that I have a lot of experience with the likes of Gouda, cheddar, and Brie.

But when I heard that Taco Bell was releasing a new Grilled Cheese Burrito, I was definitely intrigued. Had the chain finally created something that I’d love more than its Crunchwrap Supreme?

I decided to take the $US2.99 burrito for a spin to find out, and also tested Taco Bell’s $US1 Nacho Crunch Double Stacked Taco – which it recently brought back on the menu – for good measure. 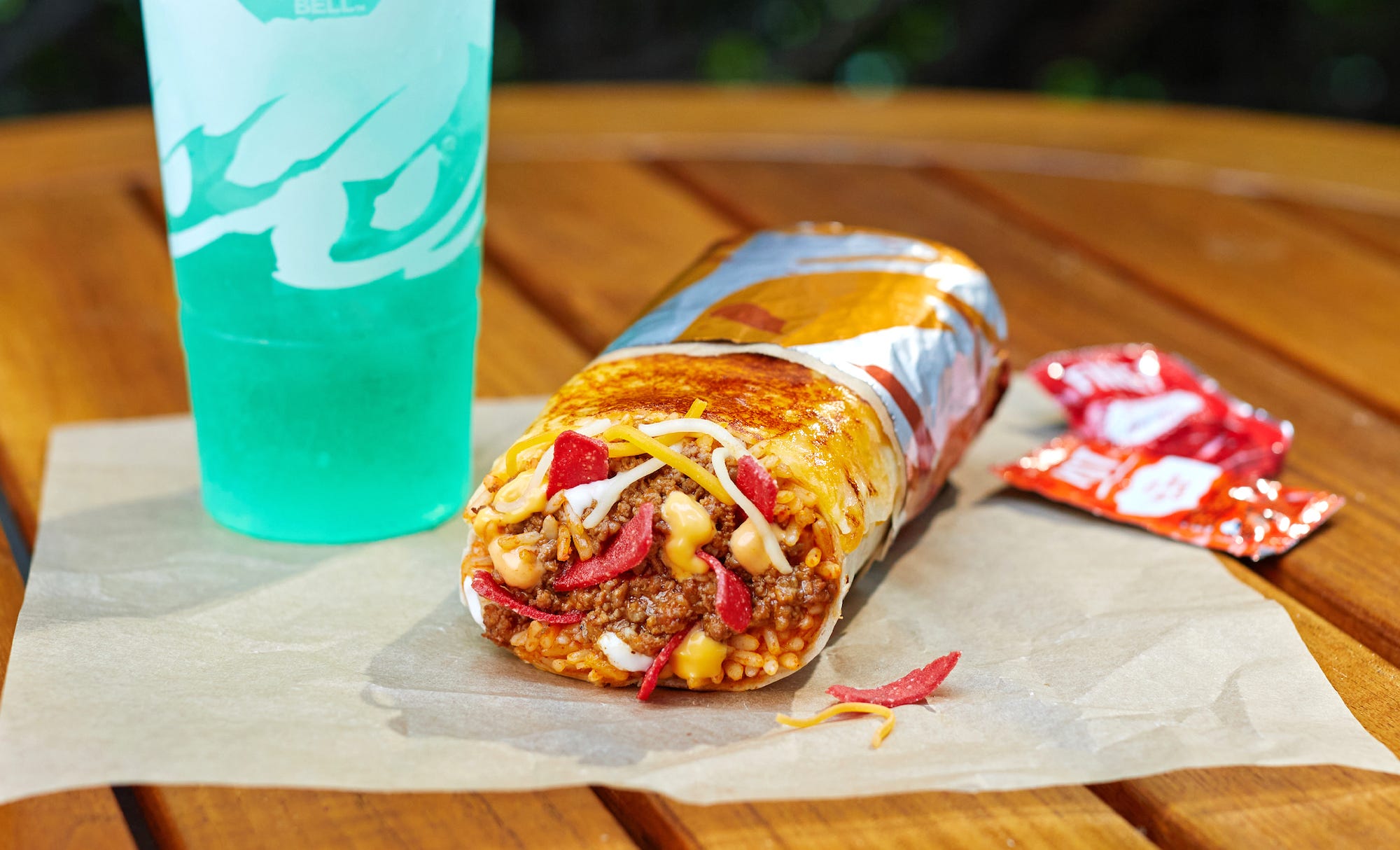 “The Grilled Cheese Burrito is the master of first impressions,” reads the description on Taco Bell’s website. “Just one look at this burrito and you know: this burrito radiates con-queso confidence.”

It was quite the claim. But would the Grilled Cheese Burrito live up to its name?

To find out, I went to my local Taco Bell’s drive-thru and ordered both the burrito and taco. 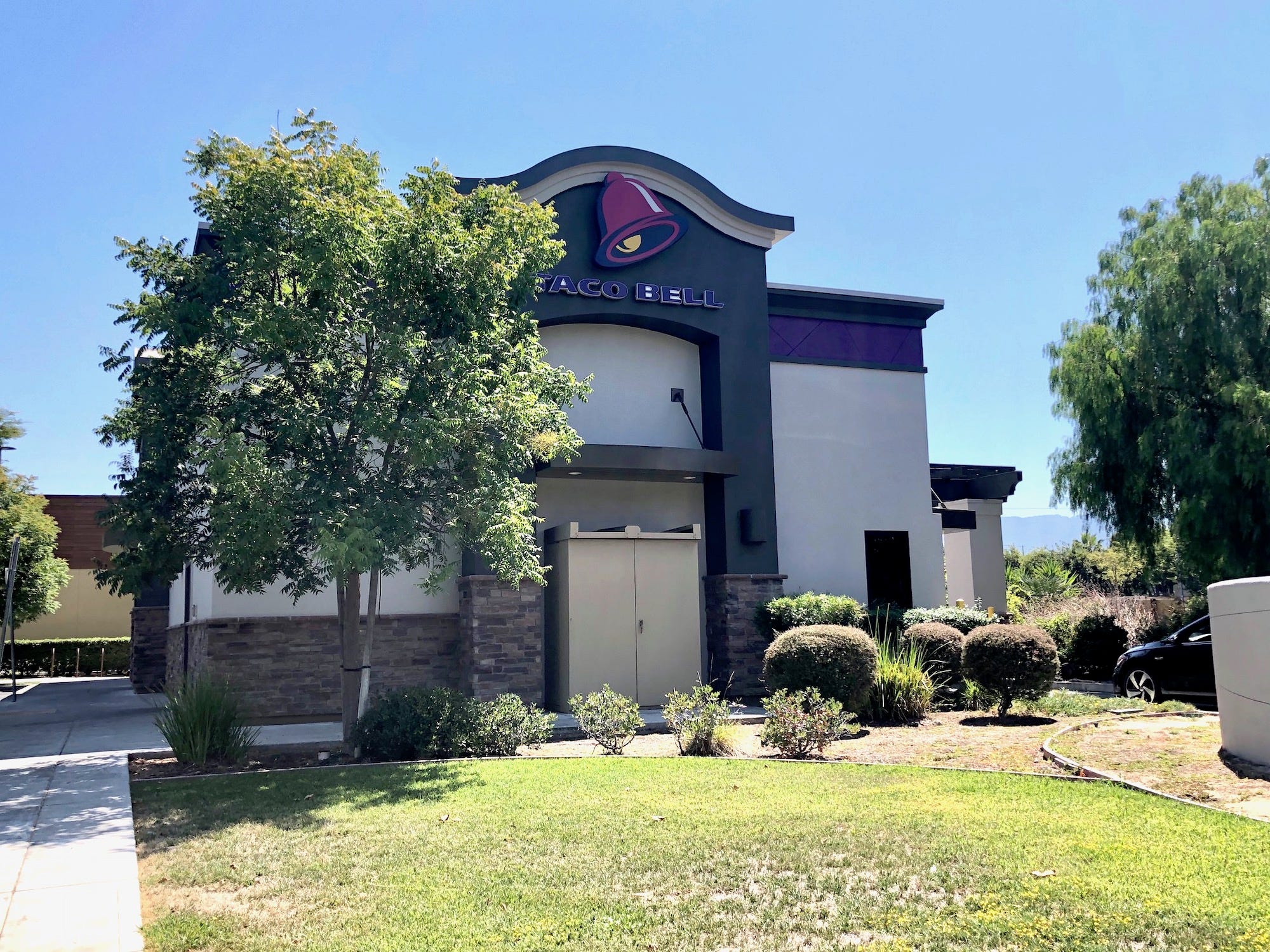 Anneta Konstantinides/InsiderI went to the drive-thru of my local Taco Bell.

I picked up two burritos and two tacos – as well as a Pineapple Freeze drink – for just under $US10.

As I unwrapped my burrito, I was immediately impressed with the grill marks on top. 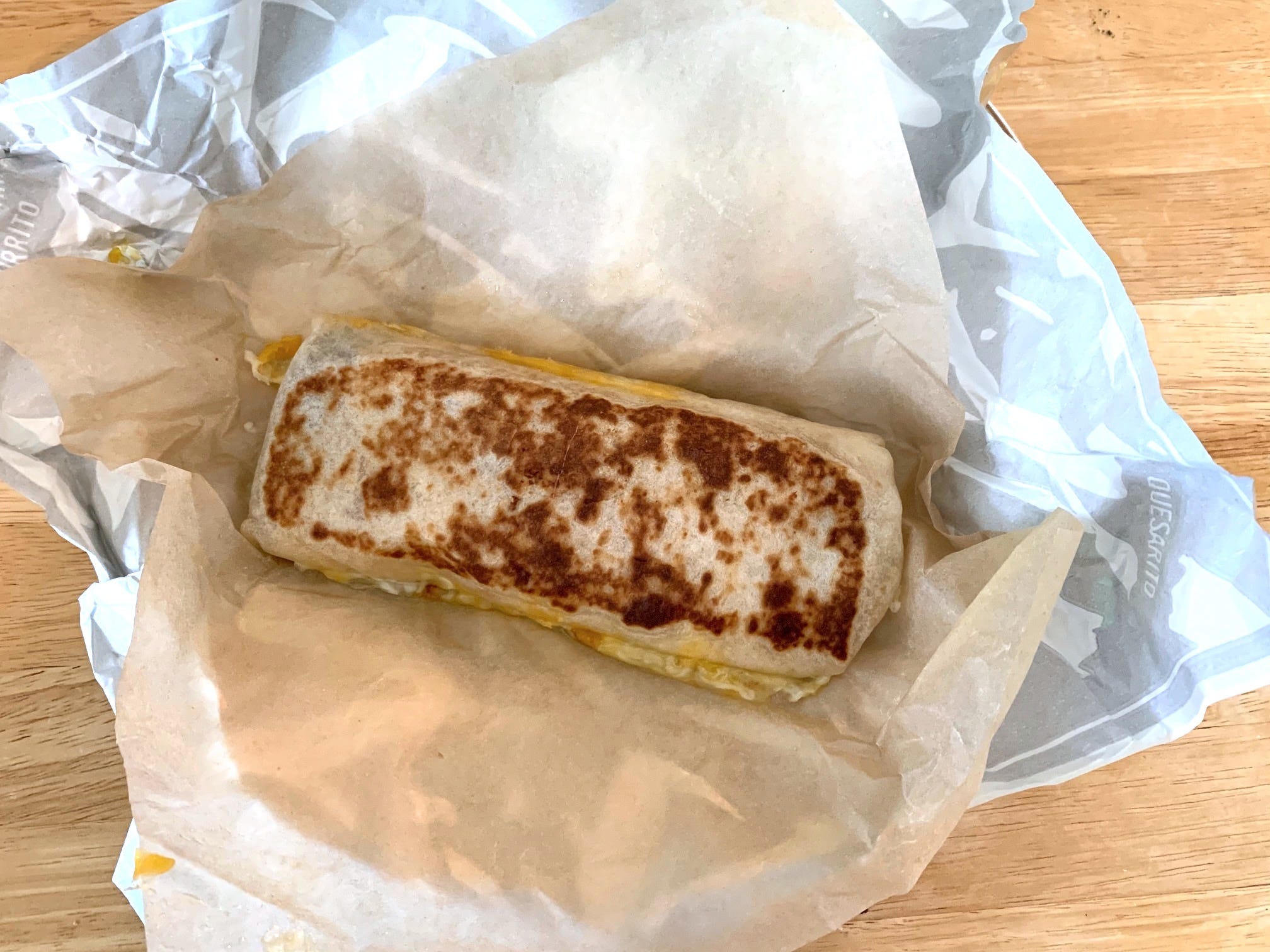 The tortilla looked nice and crispy, and the fact that I could already see nacho cheese sauce oozing from the sides was a good sign.

I cut into one of my burritos to see how it stacked up next to the promo photo, and was surprised to find that they actually looked pretty similar. 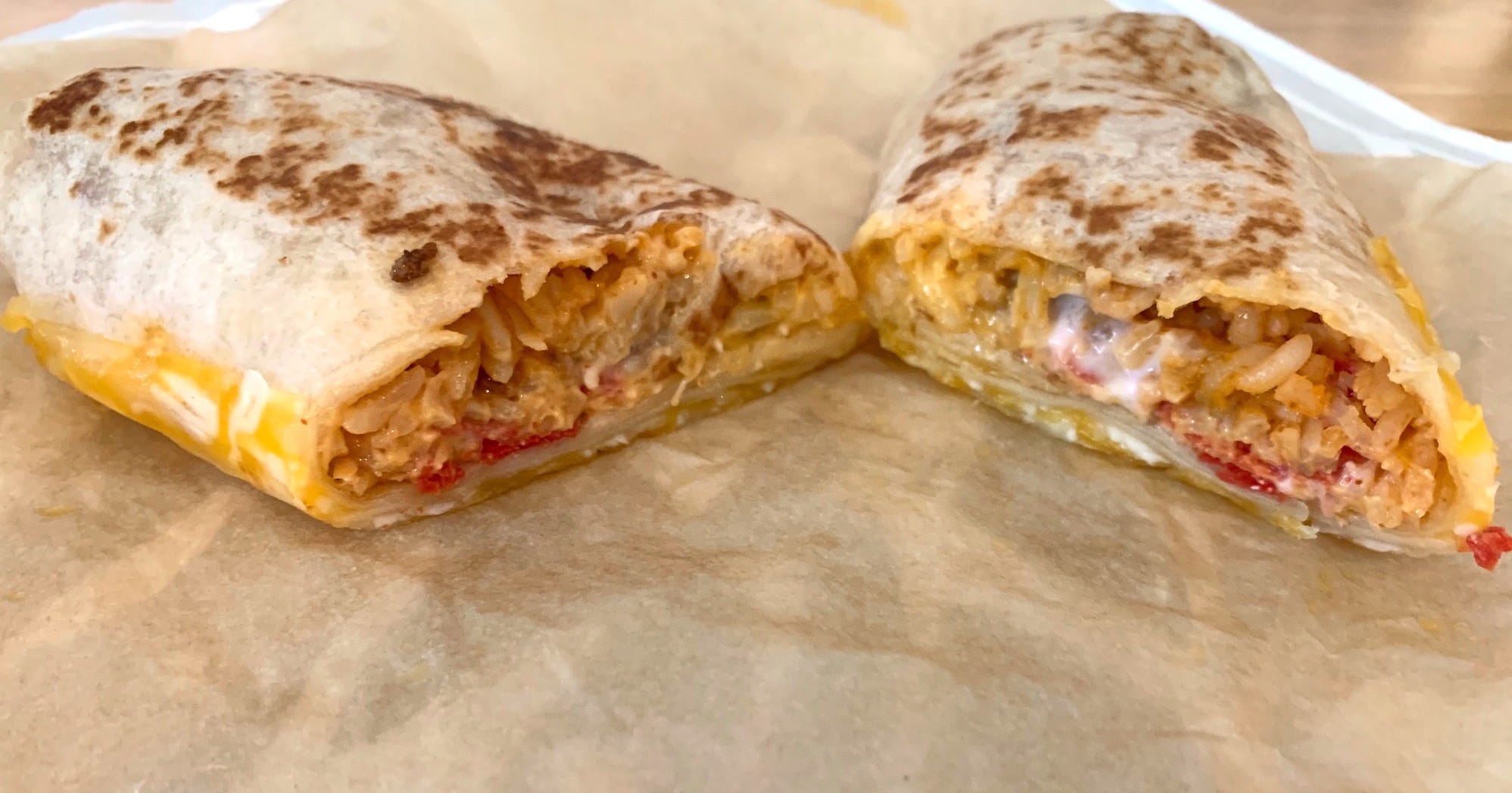 My burrito wasn’t quite as stuffed as the one in the ad, but it still looked plenty filling. I spotted a number of red tortilla strips poking through the yellow seasoned rice, which glistened with sour cream.

And it was immediately clear that there’d be no shortage of cheese in this burrito.

After just one bite, I knew I was going to be a huge fan of the Grilled Cheese Burrito. 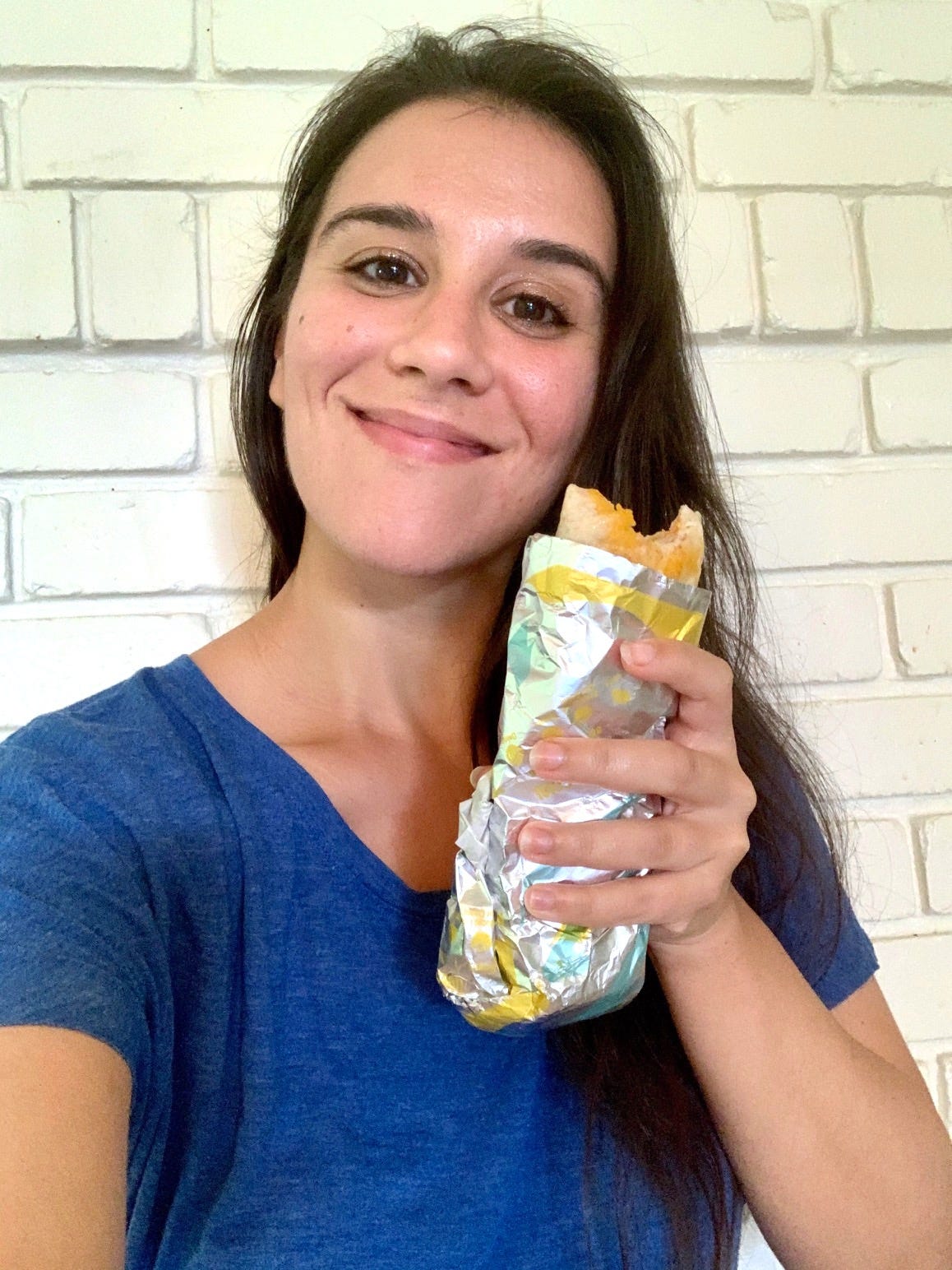 Anneta Konstantinides/InsiderI was instantly a fan.

The burrito was cheesy, but the oozing nacho sauce didn’t overpower it. The tortilla strips – along with the grilled tortilla – gave everything a nice crunch, and the seasoned rice was a great touch.

While I had initially worried that the sauce might make the burrito taste like bad stadium nachos (that plastic-tasting, neon-yellow cheese still haunts me), every bite of this burrito was warm and fresh.

I love getting second opinions when I’m doing a taste test, so I had my parents sample the burrito as well. My mum loved how the burrito tasted “almost buttery from the cheese,” while my dad liked that there was a bit of a kick to each bite thanks to the chipotle sauce.

Next up was Taco Bell’s Nacho Crunch Double Stacked Taco, which has both a soft tortilla and a hard taco shell. 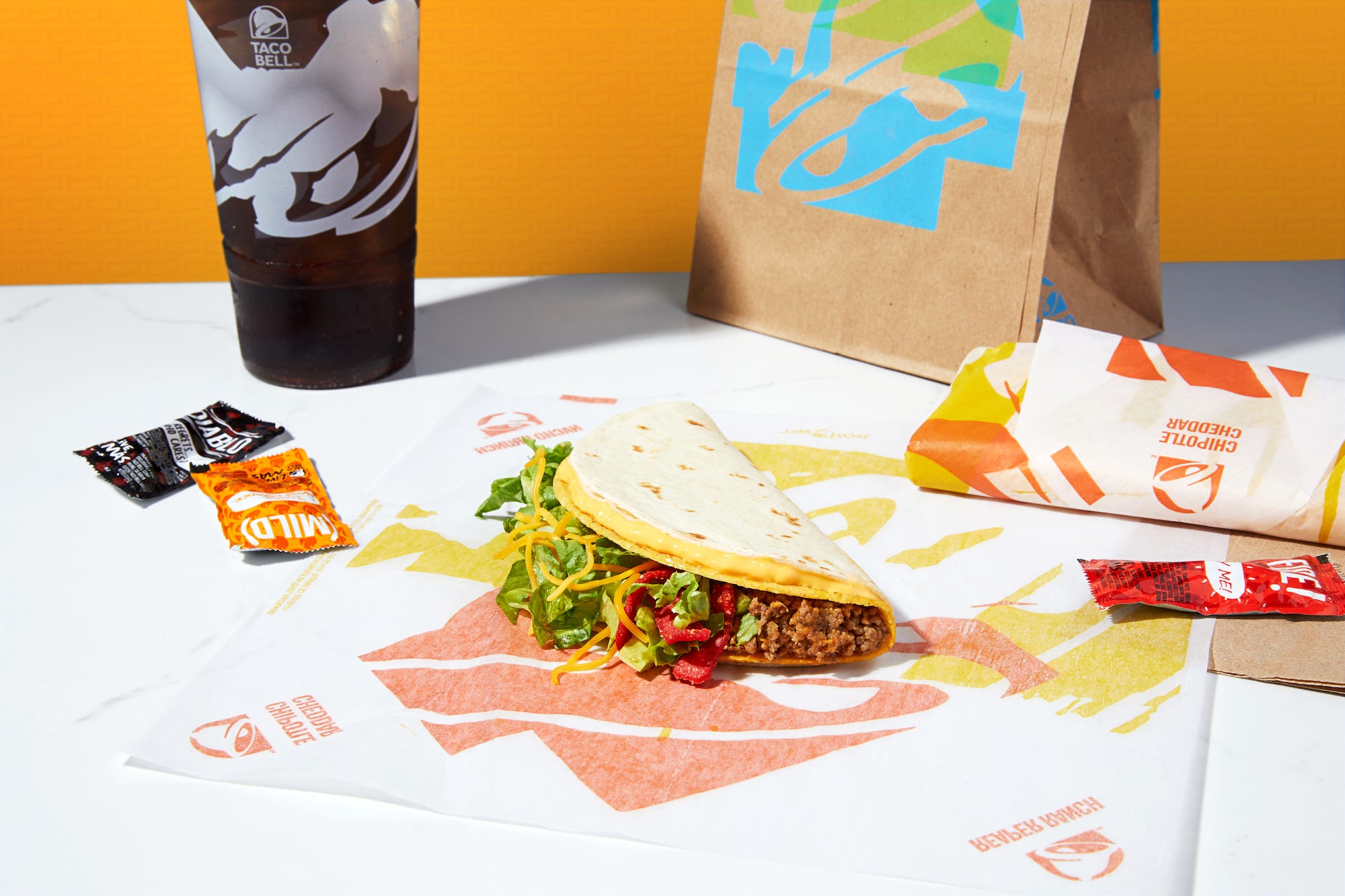 The taco – which was first released in 2016 – also comes with seasoned beef, lettuce, red strips, cheese, and nacho cheese sauce.

“It does the job of a Soft Taco and a Hard Taco, all topped with a satisfying Nacho Crunch,” Taco Bell’s description reads. “One bite and you’ll see that you too can truly have it all for only $US1.”

As I unwrapped the taco, I could already tell that it was going to be light on the filling. 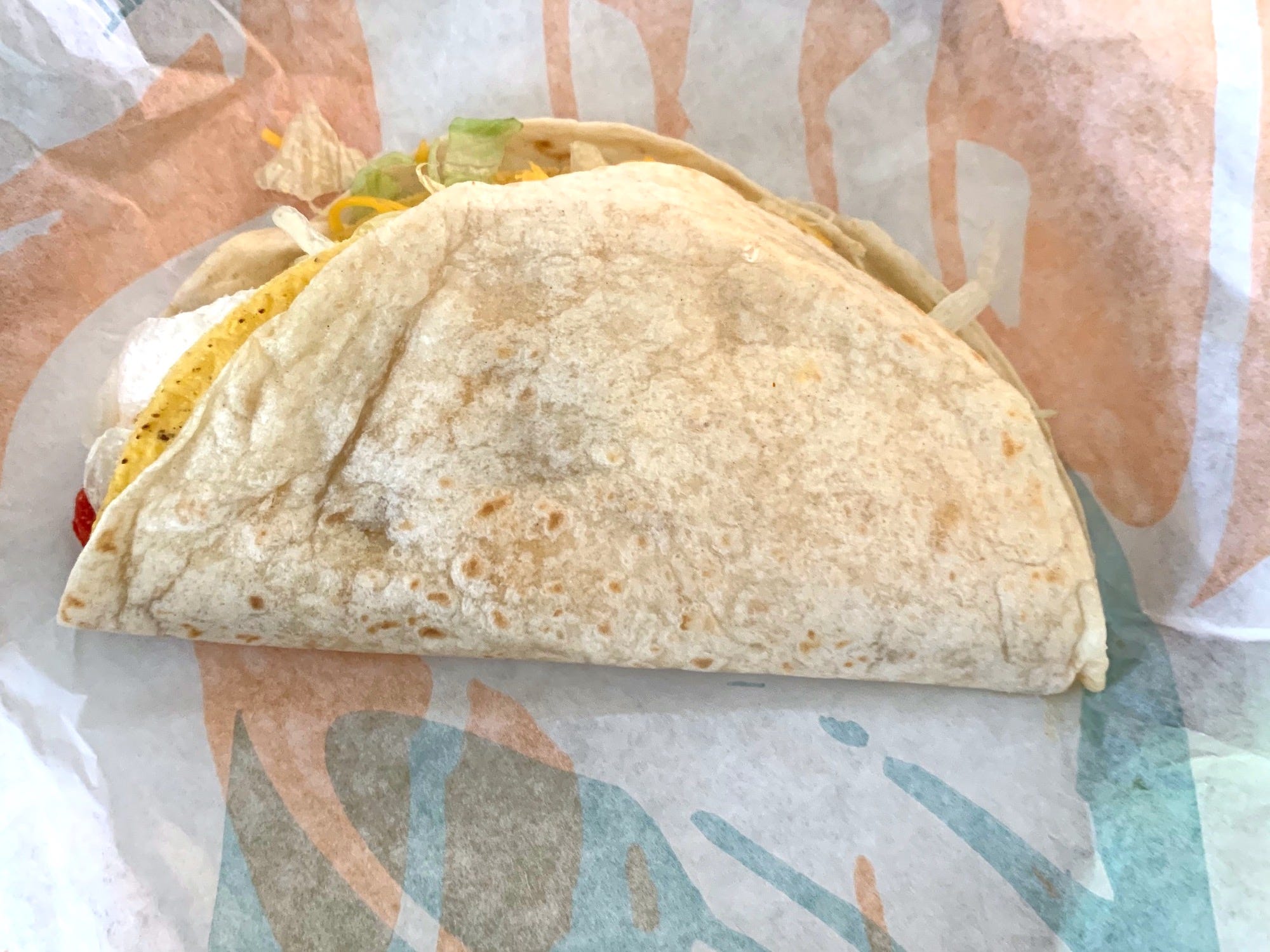 The taco definitely didn’t look as stuffed as it had in the promotional image.

I examined the taco and saw that the tortilla and hard shell were held together by some nacho cheese sauce. 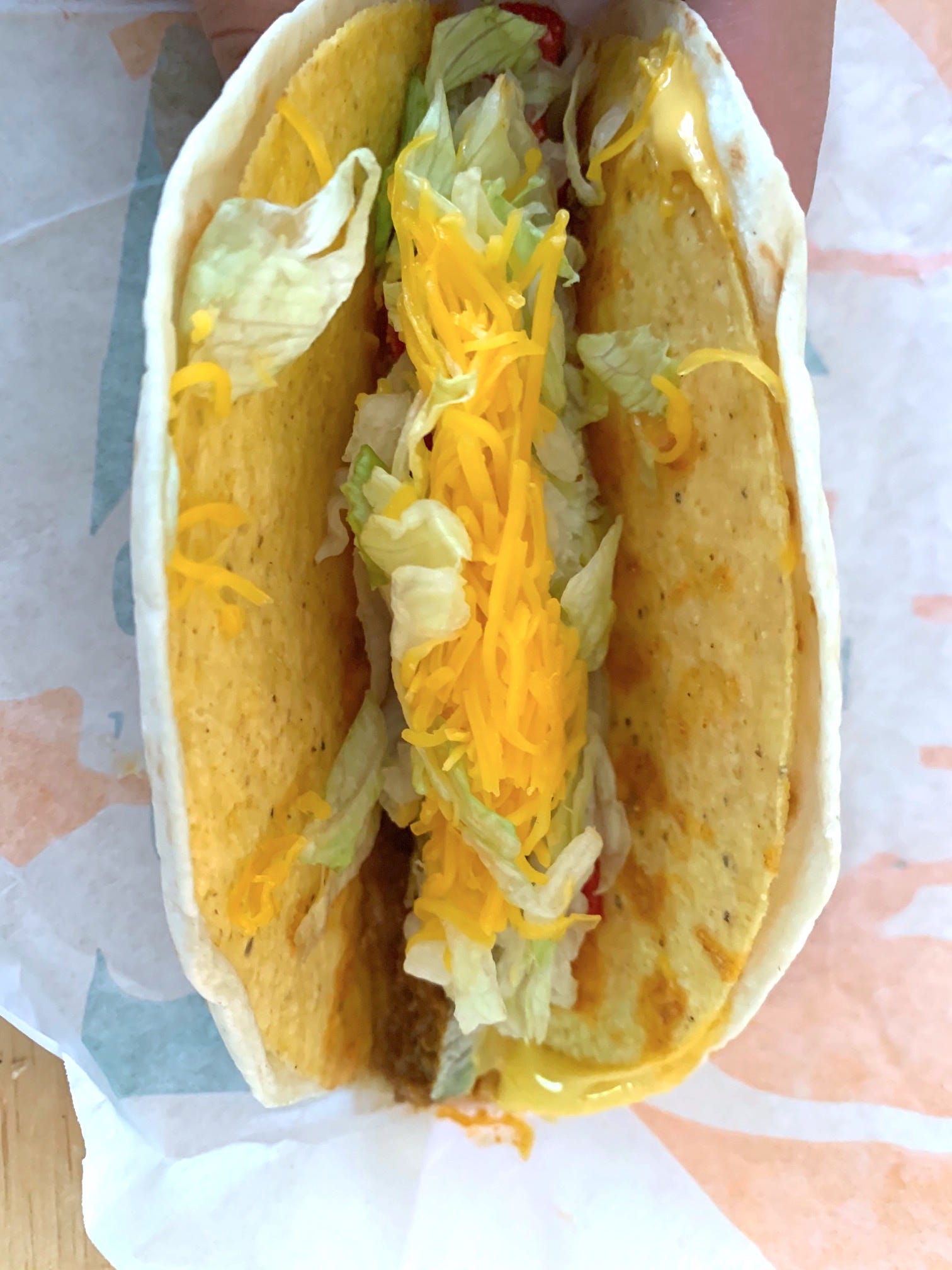 Anneta Konstantinides/InsiderThe tortilla and hard shell were held together with some nacho cheese sauce.

There was a thin layer of beef at the bottom of the taco and the lettuce and cheese appeared to be clumped together. Unlike with the Grilled Cheese Burrito, I couldn’t spot many of the tortilla strips in the taco.

Since the cheese sauce was only on the sides of the taco, I had a feeling that it was going to taste far drier than the burrito as well.

While I had high hopes for the Nacho Crunch Double Stacked Taco, it didn’t quite live up to the hype. 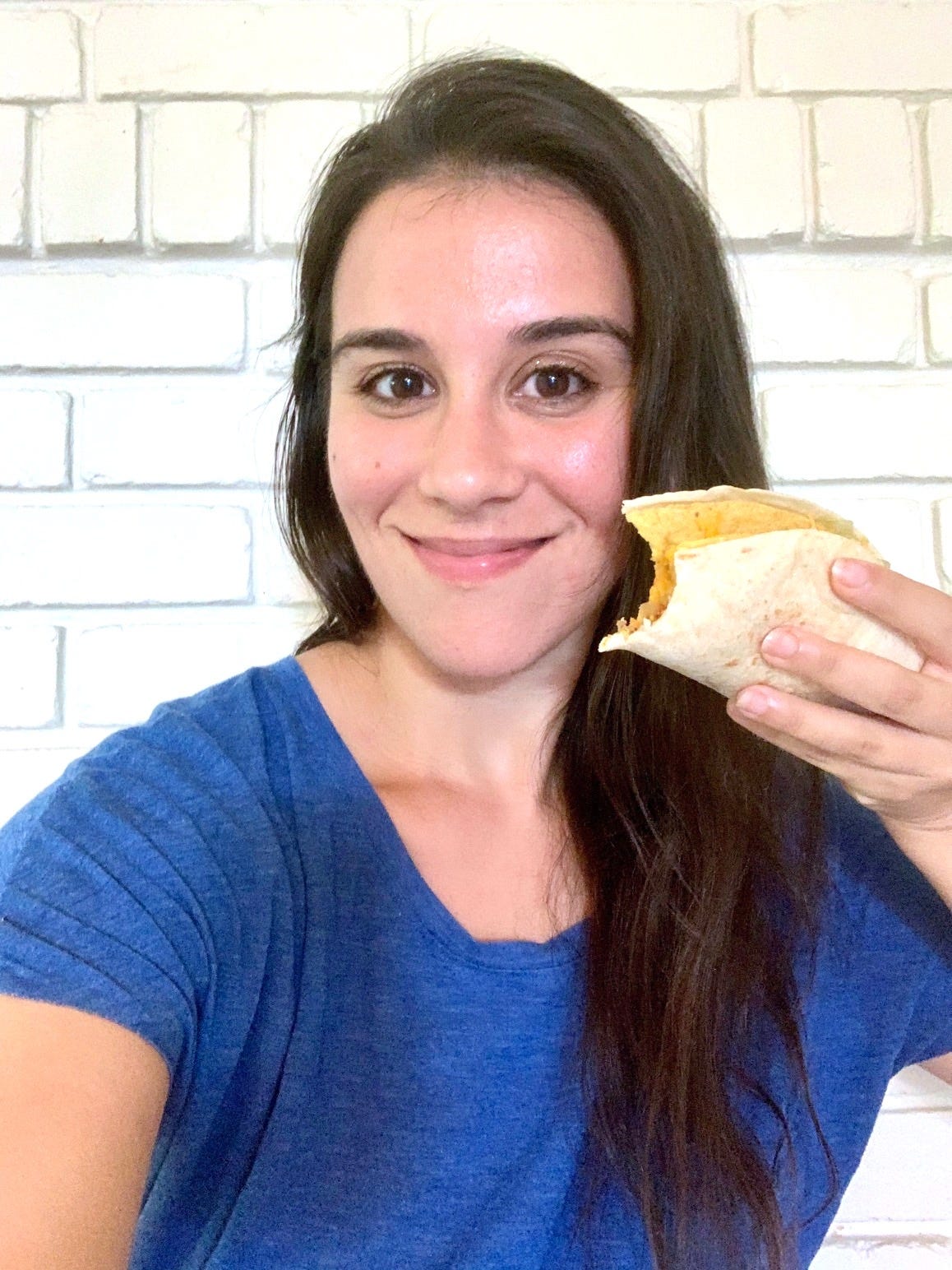 I thought the tortilla was really dry, even with the nacho cheese sauce on the side. The hard shell added surprisingly little crunch, and there wasn’t much meat overall. It all just kind of tasted like a lot of stale lettuce, in my opinion.

While I wouldn’t order this again, my dad said the taco was better than he expected. And at just $US1, it’s a snack that definitely won’t break the bank.

To top off the meal, I also tried Taco Bell’s Pineapple Freeze drink. 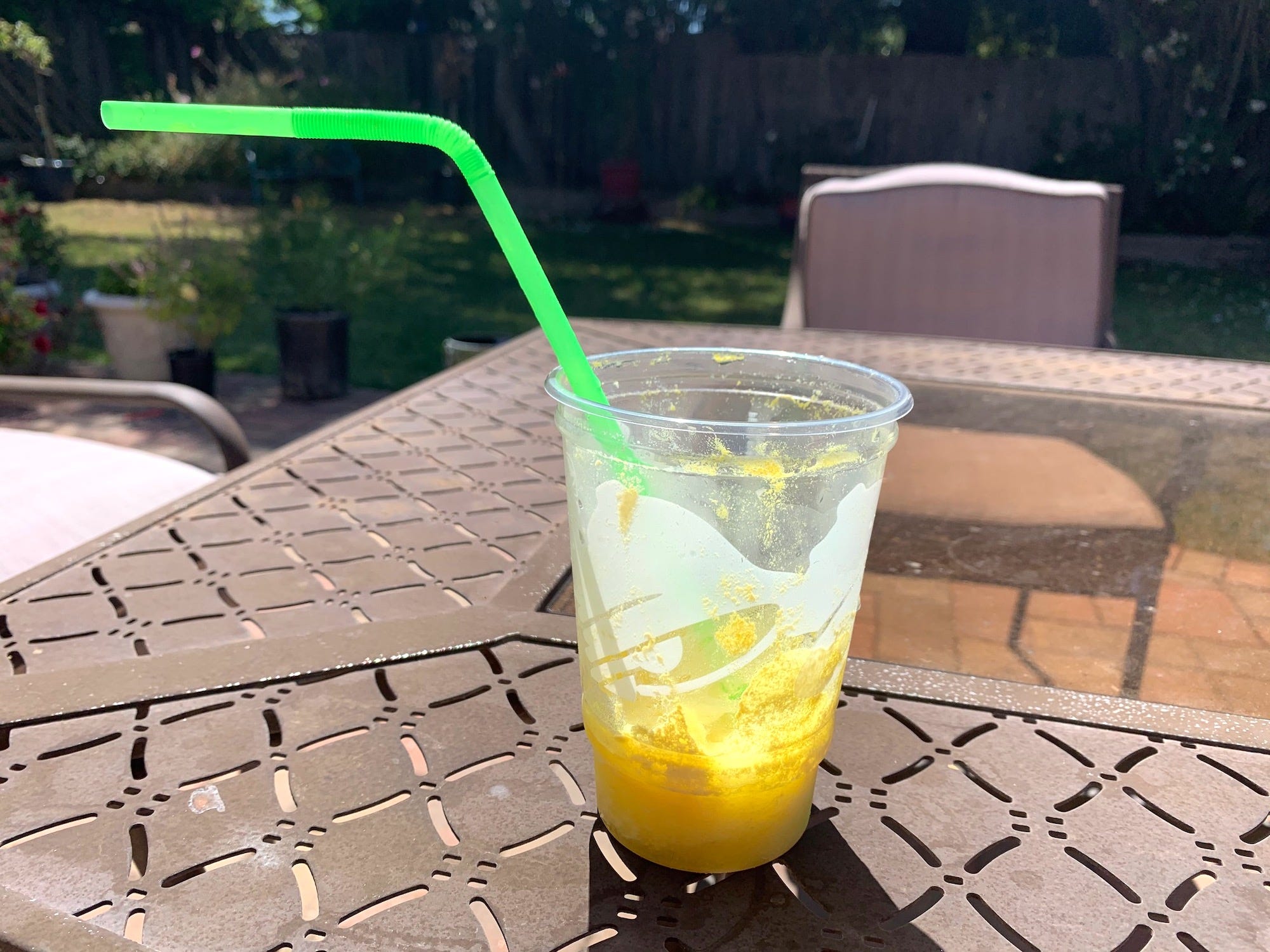 The $US2.69 Pineapple Freeze, which was released in May, is honestly one of the best original drinks I’ve had from a fast-food chain. The pineapple flavour was strong but didn’t taste artificial, and the drink as a whole was super refreshing and perfect for summer. My dad said it was his favourite part of the entire meal.

I loved the Pineapple Freeze so much that I could see myself stopping by a Taco Bell for the drink alone.

Overall I was pretty impressed with Taco Bell’s new offerings, and would order the Grilled Cheese Burrito again. 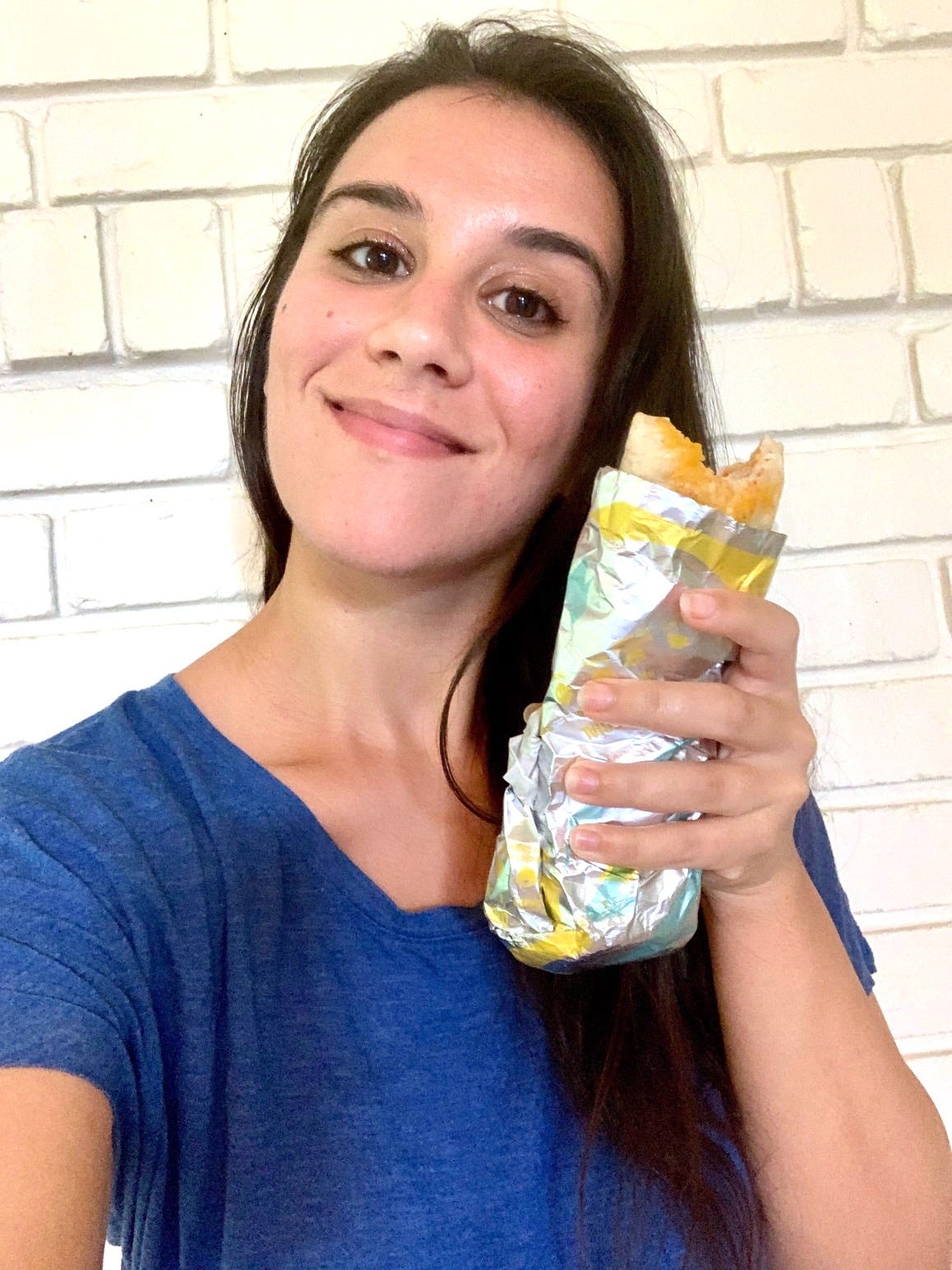 Anneta Konstantinides/InsiderIt’s no Crunchwrap Supreme, but I was impressed by the Grilled Cheese Burrito.

I can’t say that the Grilled Cheese Burrito has replaced the Crunchwrap Supreme as my one true Taco Bell love, but it easily surpassed my expectations and proved that there’s a place in the world for really cheesy burritos.

I would happily order it again with a Pineapple Freeze. Next time, though, I’ll skip the taco.