“Grand Theft Auto” has always been an impressive video game franchise, but it’s never been this impressive before.

The latest game in the series, “Grand Theft Auto V,” has been available on PC for over two years. Since its launch in 2015, fans have taken the already gorgeous game and modified into into something truly remarkable.

Every image you see here is from 'Grand Theft Auto V' on PC, using the 'NaturalVision' modification.

Rockstar Games/Flickr
Since there are no officially licensed cars in 'GTA V,' this Lamborghini is also a mod.

The mod's creator, who goes by the pseudonym 'Razed,' says it took 'over 1200 hours' to create this update across six months.

Notably, this is the 'Remastered' version of the original 'NaturalVision' mod, which presumably took another few hundred hours and several months of work. It's a huge step up over an already very impressive mod.

Some of the shots are genuinely hard to discern from reality, especially in the case of landscapes like this.

The 'Remastered' version of 'NaturalVision' isn't just pretty still images. You can play the game looking this good, and it apparently runs similarly to the original game.

That's important, as mods like this make games look so good that they can't be run on normal gaming PCs (the type that would run the original game, for instance).

Unbelievably, it sounds like this mod doesn't require a supercomputer.

In the mod's description, 'Razed' goes into some more detail about performance:

'With NaturalVision Remastered, your in-game performance will be about the same as vanilla (standard 'GTA V'). The only thing that matters is how you currently run 'GTA V' without mods and the FPS (frames per second) you receive on average.'

From the sounds of this, if you can run the standard game on your home PC then you're able to run this mod.

It's in the subtlety of lighting and shadows that make this so incredibly impressive. The softness of morning light, for instance:

Or this calm pier at dawn, accompanied by ridiculously impressive shadows on the water reflection:

Though many of the cars in these images are pulled from real life (rather than the cars created for 'GTA V' by its developers), standard 'GTA V' cars should look as good or better with this mod.

Environmental effects are similarly impressive, like this shot of lightning striking in the distance. And if you're looking to make this stuff really stand out, the included instructions with the mod point to some other mods that will make the game look even better.

Viewing the game through the optional first-person view, you can see a tremendous amount of detail in the world (down to the creases on the player's gloves).

'GTA V' lends itself especially well to a modification like this given its wide variety of environments, weather systems, and activities. You're just as likely to drive through the urban sprawl of downtown Los Angeles (Los Santos) as you are to zoom through the mostly empty desert outside the city.

And yes: There are plenty of photo opportunities if that's what you're looking for.

You can download the mod right here -- you'll need a copy of 'Grand Theft Auto V' on PC, which you can buy through Steam right here.

But let's stop kidding ourselves: You need to see this in action, and this incredible trailer (for a mod!) is perfect for that. Enjoy: 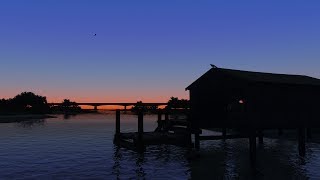