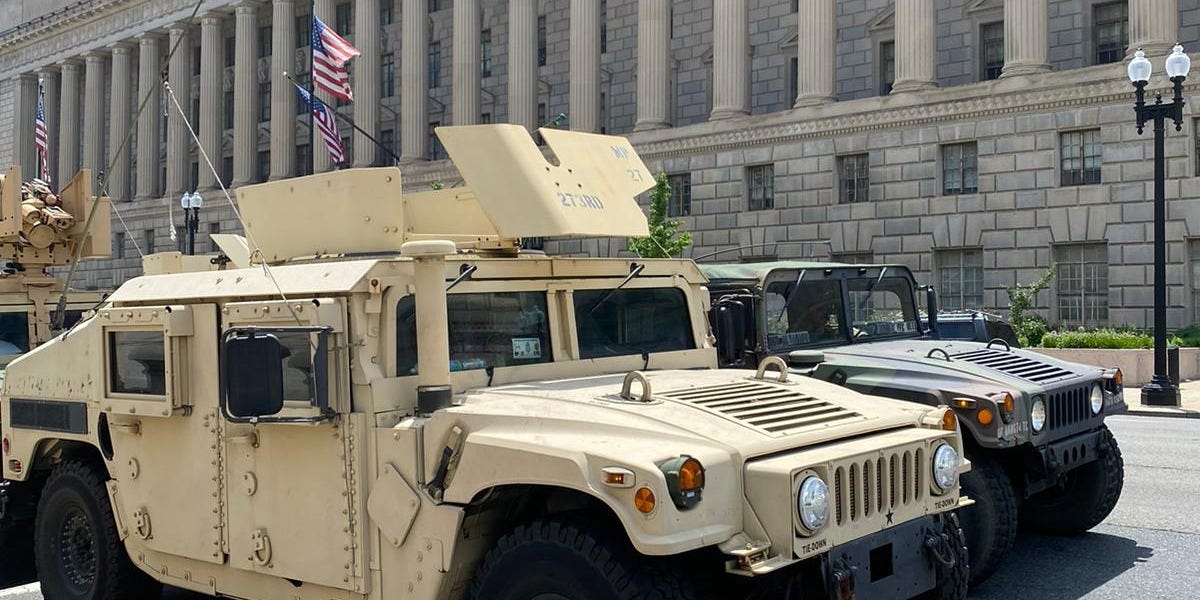 As largely peaceful protests against police brutality unfolded across the country following the death of George Floyd in police custody, officials at the Pentagon, the National Guard operations centre, and some Republican-led states prepared for an insurrection.

According to The New York Times, officials at the Pentagon and National Guard operations centre held a conference call with all the commanders of the state National Guard forces on Monday, June 1, following a weekend of clashes between police and protesters.

The call, the report said, was “blunt and urgent.” Its objective was to figure out how soon and how many troops the National Guard could send to Washington, DC, on short notice.

“Tens of thousands of rifle and pistol rounds were stored in the DC Armory and partitioned in pallets, labelled by their state of origin, to be used on American citizens in case of emergency,” the report said.

The episode highlights the the turmoil top government and military officials faced as President Donald Trump urged them to crack down on what have been largely peaceful protests. Trump also called on states to “dominate” protesters with “overwhelming force” in an address last week.

The Times reported that some National Guard commanders were concerned about sending forces into Washington, DC, without having a clear idea of what their mission was. But Gen. Mark Milley, the chairman of the joint chiefs of staff, and Ryan McCarthy, the Army secretary, reportedly warned the National Guard that if it could not quell the protests, the president would likely deploy the 82nd Airborne Division to do the job.

The Trump administration drew even more scrutiny over the next several days as reports surfaced of unidentified troops patrolling the streets of the nation’s capital at the president’s command.

According to Defence One, some carried rifles and others had body armour, riot shields, and pepper spray.

Dan Friedman, a Mother Jones reporter, encountered some of the federal officers last Tuesday. They told him that they were with “the Department of Justice” when asked to identify themselves. NBC News’ Garrett Haake had a similar experience, writing that federal officers outside the White House refused to identify themselves and that all insignias and name plates had been removed.

Two security personnel identified themselves to Defence One as being part of the Special Operations Response Team, an emergency unit from the Bureau of Prisons that’s tasked with maintaining order at correctional facilities.

The revelation came after NPR reported that Attorney General William Barr had ordered the Bureau of Prisons, which is part of the Department of Justice, to send its riot-response teams to help local law-enforcement officials in Washington.

Barr’s decision came after Trump made headlines on June 1, when federal forces used tear gas to dispel a peaceful demonstration in Lafayette Square to clear the way for a staged photo-op for Trump at the nearby St. John’s church.

The US Park Police (USPP) released a statement the next day denying it had used tear gas and saying it had instead used smoke canisters and pepper balls to disperse the crowd.

But the Centres for Disease Control and Prevention defines the pepper gas the Park Police used as a form of tear gas. USPP spokesperson Sergeant Eduardo Delgado also told Business Insider’s Eliza Relman in an interview that the agency was “incorrect” when it said its forces did not use tear gas to break up the crowd.

Trump and several Republican lawmakers, meanwhile, continue suggesting the demonstrations are part of a widespread and coordinated effort by the far-left group antifa to take advantage of civil unrest to stoke violence.

Though there have been some instances of looting and rioting connected to the protests, a closer examination of court records, media reports, and social media activity shows little evidence of an organised antifa-led infiltration of the demonstrations.

Still, several Republican lawmakers have issued calls to “send in the troops,” most notably Arkansas Sen. Tom Cotton, who wrote a controversial Times op-ed on the matter.

“We need to have zero tolerance for this destruction,” he tweeted, calling protesters “Antifa terrorists.” “And, if necessary, the 10th Mountain, 82nd Airborne, 1st Cav, 3rd Infantry – whatever it takes to restore order. No quarter for insurrectionists, anarchists, rioters, and looters.”

“No quarter” is a military term that means a commander will not accept the lawful surrender of an enemy combatant and suggests the captive will instead be killed. The practice is a war crime under the Geneva Conventions.

Republican Rep. Matt Gaetz equated some protesters demonstrating against police brutality with antifa and said they should be hunted down like terrorists.

“Now that we clearly see Antifa as terrorists, can we hunt them down like we do those in the Middle East?” Gaetz tweeted.