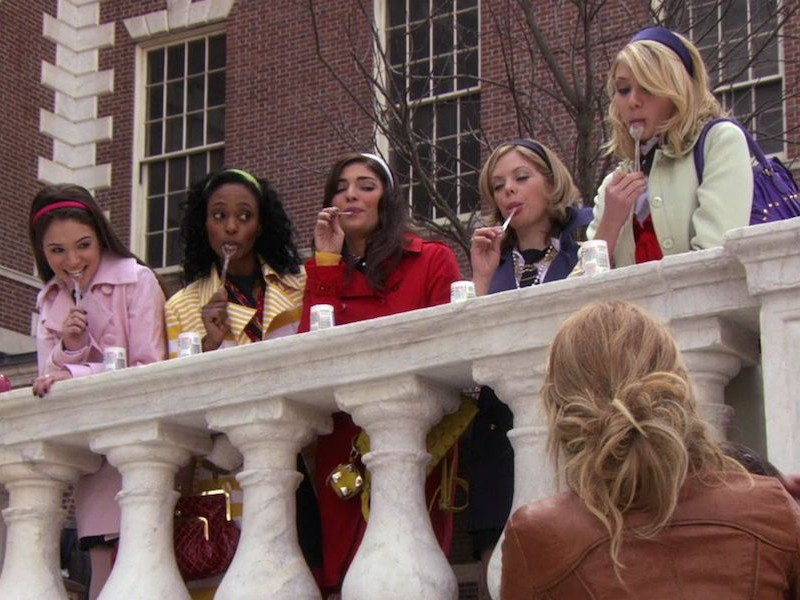 Warner Bros. Television DistributionThere are some things you might not know about ‘Gossip Girl.’

When The CW’s “Gossip Girl” aired its last episode in December 2012, nearly 1.5 million people tuned in to find out the true identity of the show’s narrator, Gossip Girl, who was voiced by Kristen Bell.

Viewers were shocked and delighted by the finale, but even the biggest fans might not know everything about how the show was made.

In the lead-up to HBO Max’s highly-anticipated reboot, read on for some behind-the-scenes secrets about “Gossip Girl.” 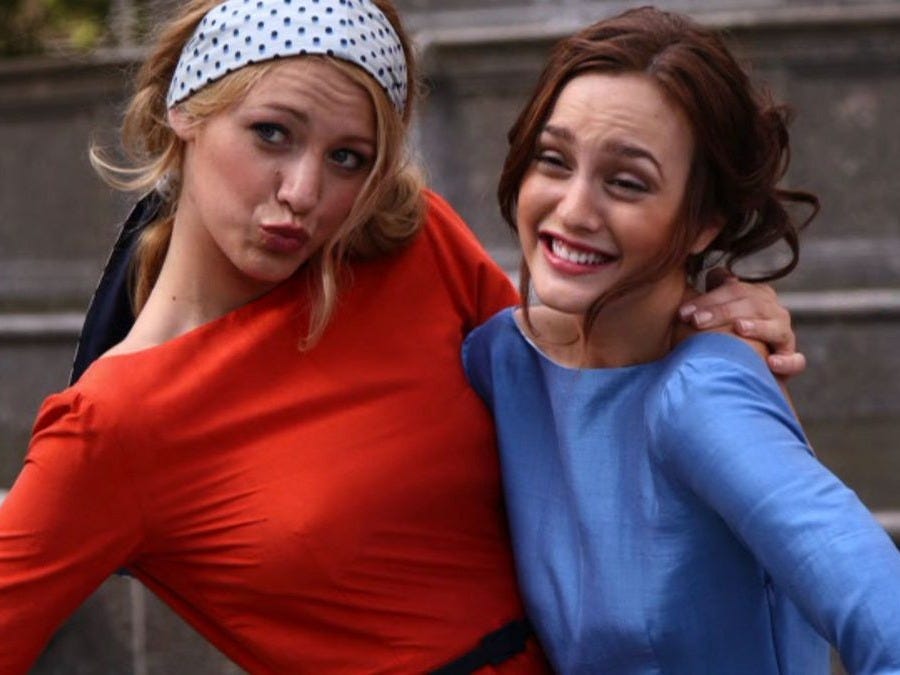 The announcement came in celebration of the airing of the show’s 100th episode. 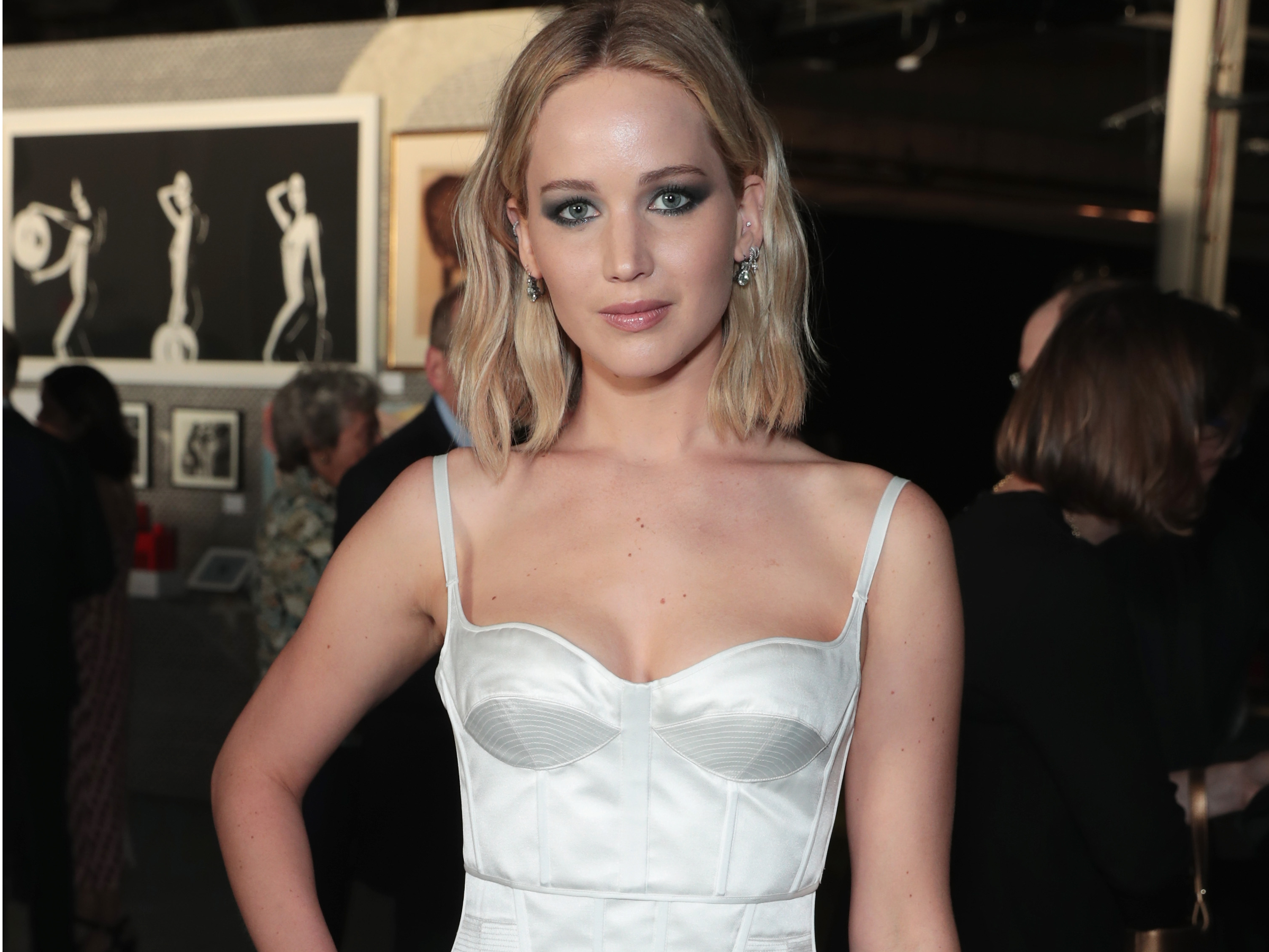 Cindy Ord/Getty ImagesJennifer Lawrence was reportedly ‘bummed’ that she didn’t get the part.

Before Blake Lively was given the role of Serena van der Woodsen, Jennifer Lawrence put her hat in the ring.

According to executive producer Josh Schwartz, Lawrence “definitely auditioned and was bummed to not get it.”

“Gossip Girl” was shot on location in New York City. 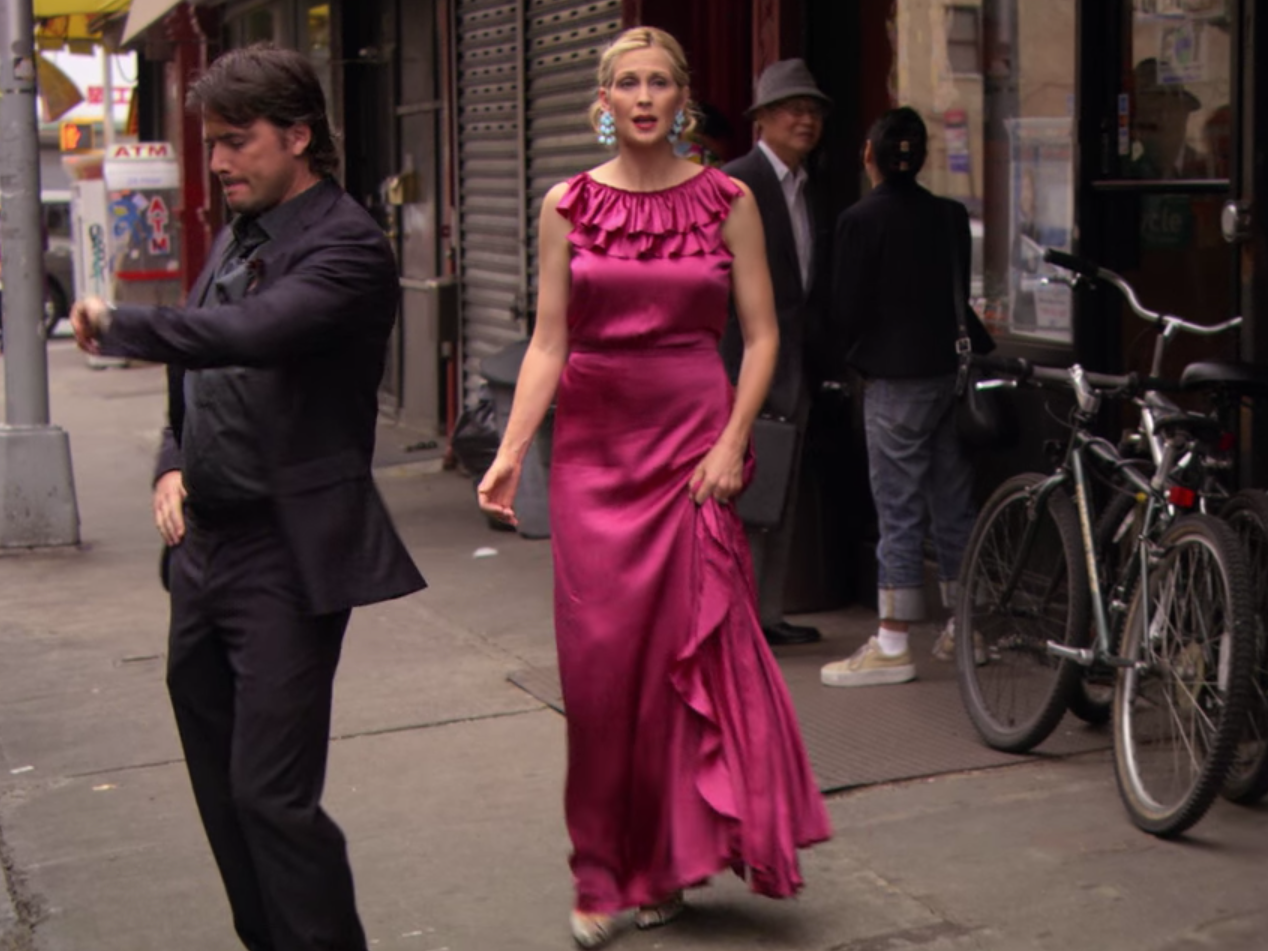 The CWThe scenes may look familiar to New York locals.

“Gossip Girl” was shot in New York City, and used several famous landmarks as backdrops, including the Metropolitan Museum Of Art, Bethesda Fountain in Central Park, and The Empire Hotel – which now serves “Gossip Girl”-inspired cocktails.

The show has even inspired a sightseeing tour for avid fans, which features stops at Dylan’s Candy Bar and Grand Central Terminal.

Each episode title is a play on a famous movie. 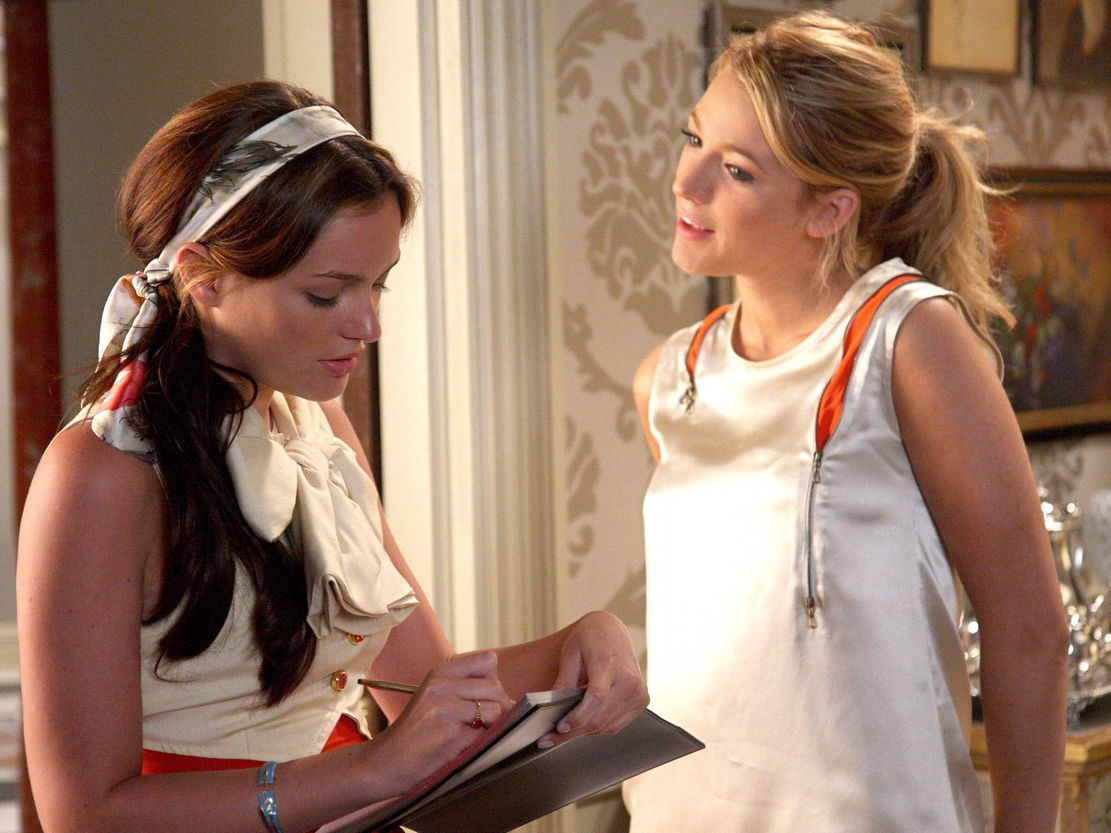 CWSome fans picked up on the trend.

If fans take a closer look at every “Gossip Girl” episode title, each one is a spoof of a famous movie.

Lively and Penn Badgley dated and then secretly broke up while they were filming the show. 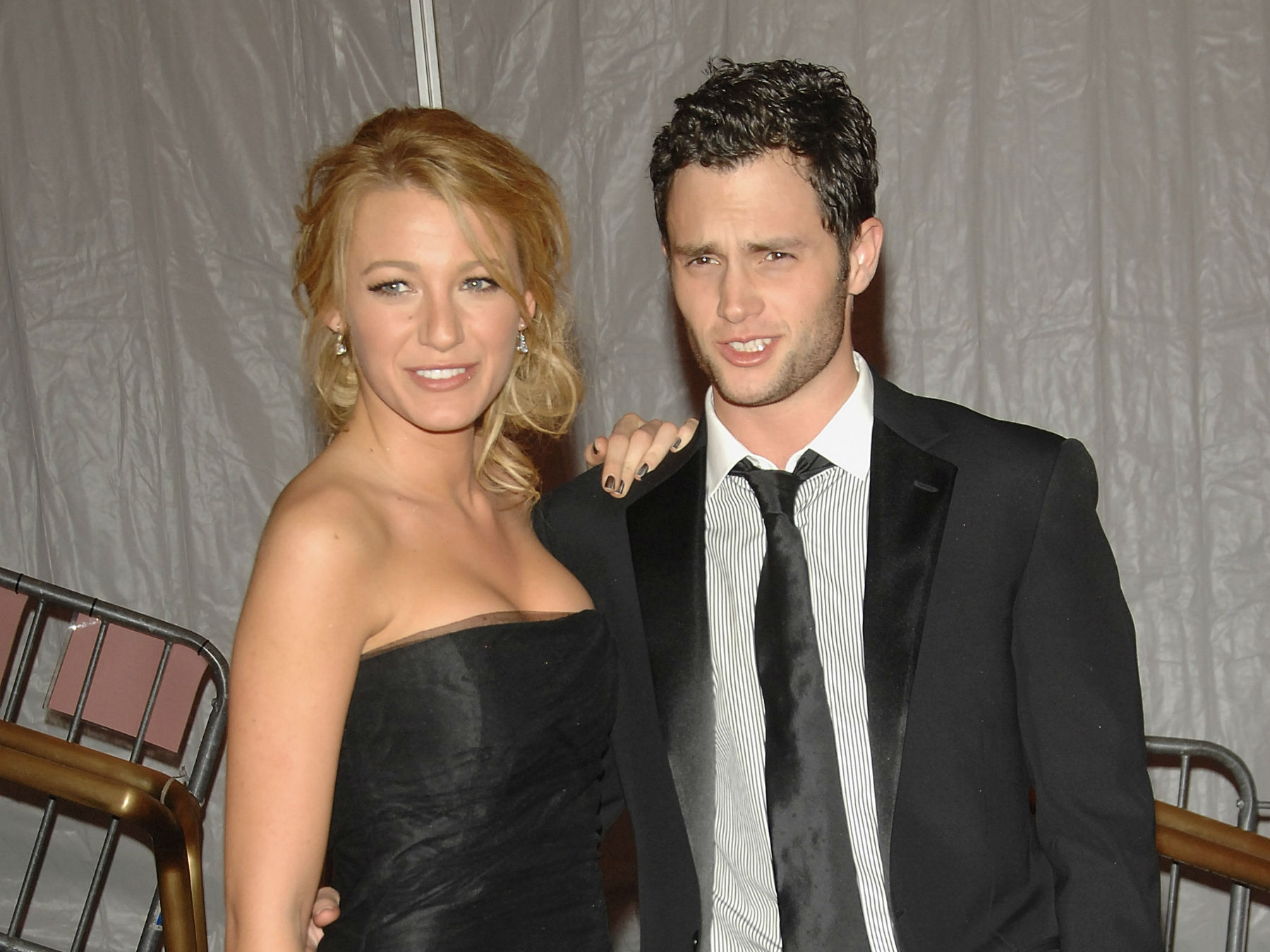 Evan Agostini/APEven the producers didn’t know they broke up.

Just like their on-screen personas, Lively and Penn Badgley dated for a few years while filming “Gossip Girl.”

The two reportedly went public with their relationship in 2008 and called it off in 2010. But no one on the set was aware when the two broke up.

“The shocking thing was, I found out on the set of the season two finale that Blake and Penn had broken up months before … They kept the breakup hidden from the crew, which you could never do now,” executive producer Joshua Safran told Vanity Fair in 2017. “I don’t even know how they did it. They kept it from everybody which is a testament to how good they are as actors. Because they did not want their personal drama to relate to the show.”

Lively and Meester weren’t as close as Serena and Blair. 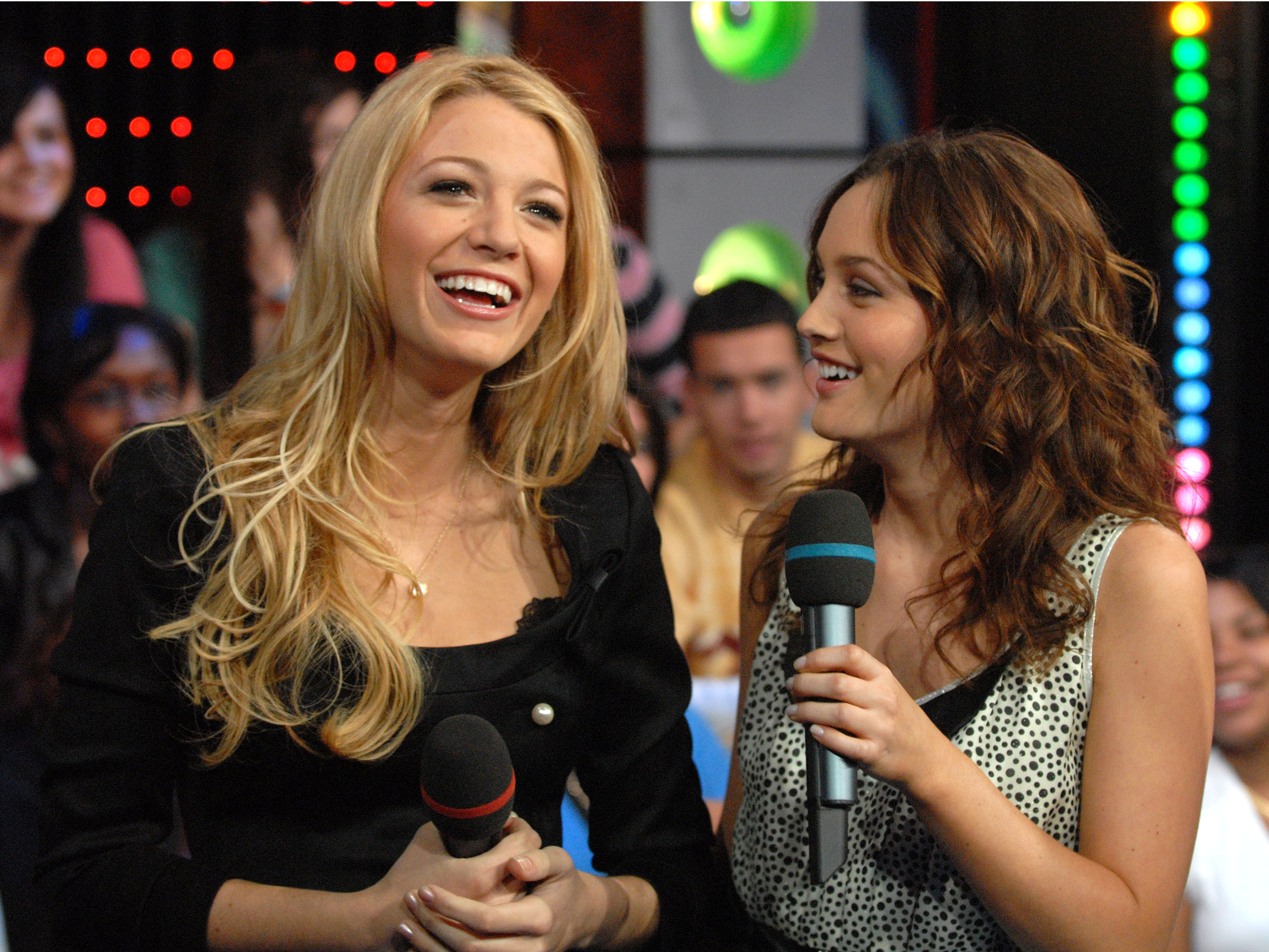 Serena and Blair were the ultimate BFF duo. Off-screen, however, producers have said Lively and Meester were not as compatible.

Safran, told Vanity Fair, “They were friendly, but they were not friends like Serena and Blair.”

Serena and Blair’s wardrobes were inspired by fashion icons. 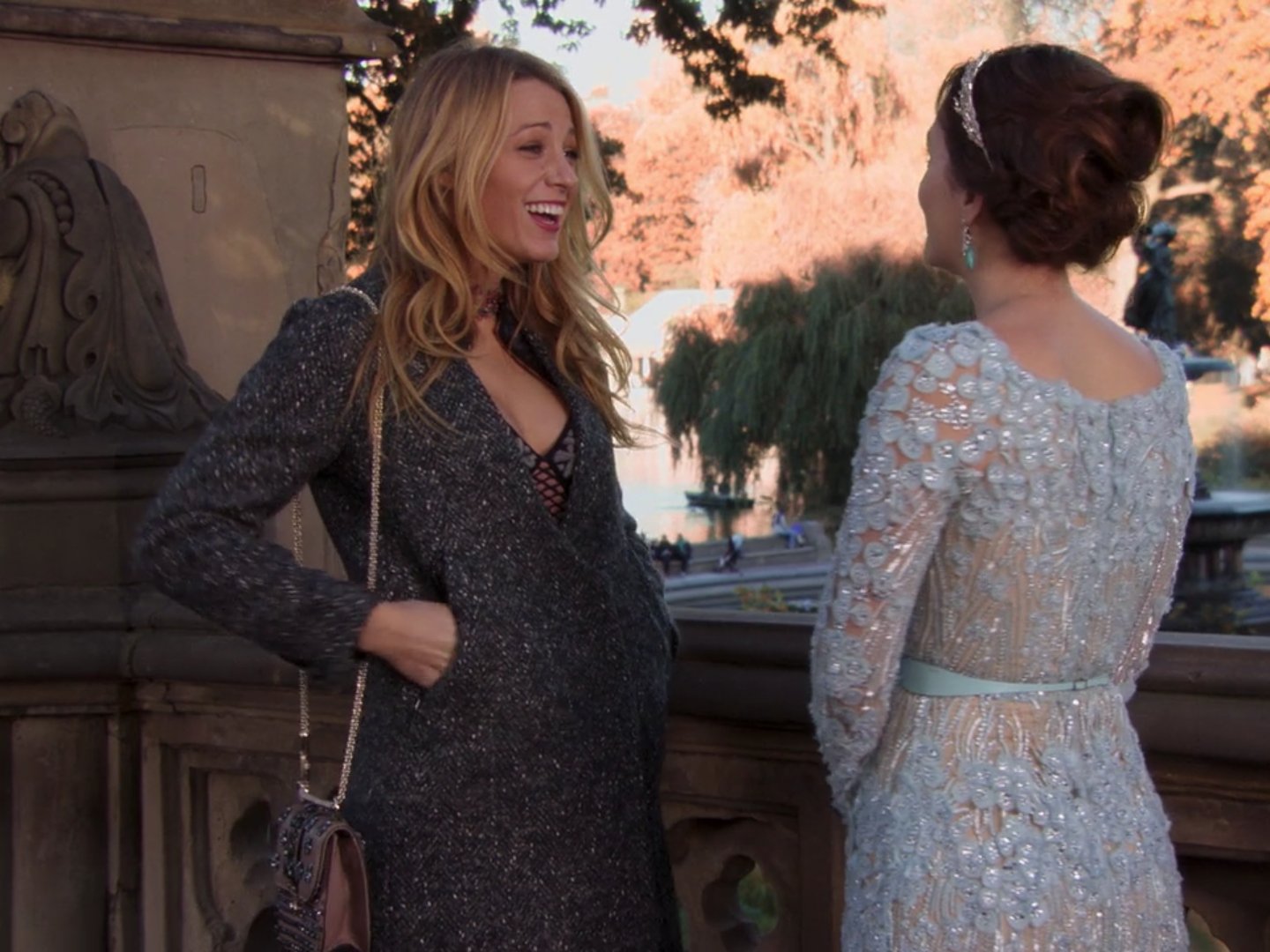 The CWKate Moss and Audrey Hepburn were inspirations behind the characters’ styles.

In a 2012 interview with HuffPost, “Gossip Girl” costume designer Eric Daman shared the inspirations behind both Serena and Blair’s wardrobes.

For Serena, the look was modelled after Kate Moss. This included a lot of “nonchalant fashion,” which he described as “having that ‘I’ve travelled to Europe’ vibe.”

Daman made sure that none of the guys wore belts on the show. 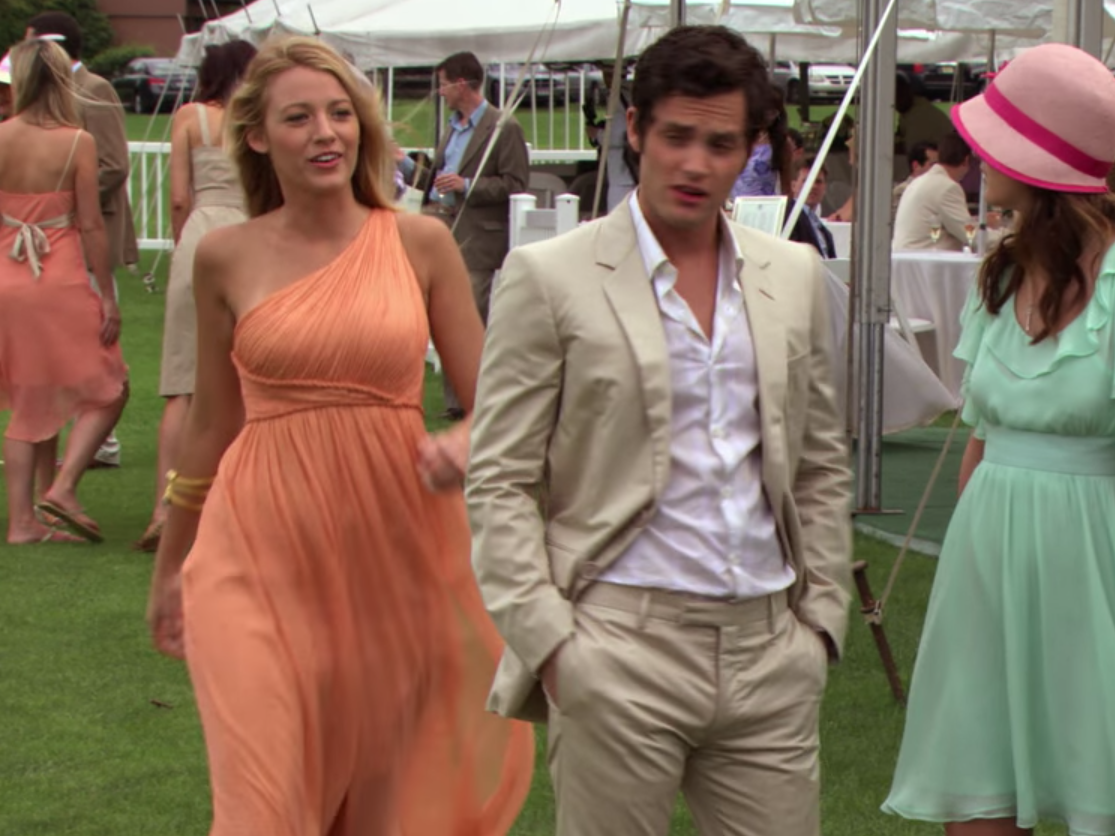 The CWBlake Lively and Penn Badgley on ‘Gossip Girl.’

In April, Sebastian Stan told Variety that one thing he remembers from his time as Carter Baizen on “Gossip Girl” was that he never got to wear a belt.

“I remember going into the fittings and being told, ‘You’re never wearing a belt again from a fashion standpoint,'” he said. “I was like, ‘OK.’ So I never wore a belt again.”

He added, “Just watch. There’s not a belt on that show.”

A few months later, Daman told Variety that mens belts were one of his fashion “pet peeves.”

“… This was also the era of metrosexuals, ‘Jersey Shore’ and hideous jeans with really ugly belts. No, this is not happening on my watch …” he said.

The costume designer also added that all the clothes were tailored very specifically so that they looked right on camera.

“Belts add an extra girth around the waist, and no one wants that for a classy look,” Daman said. 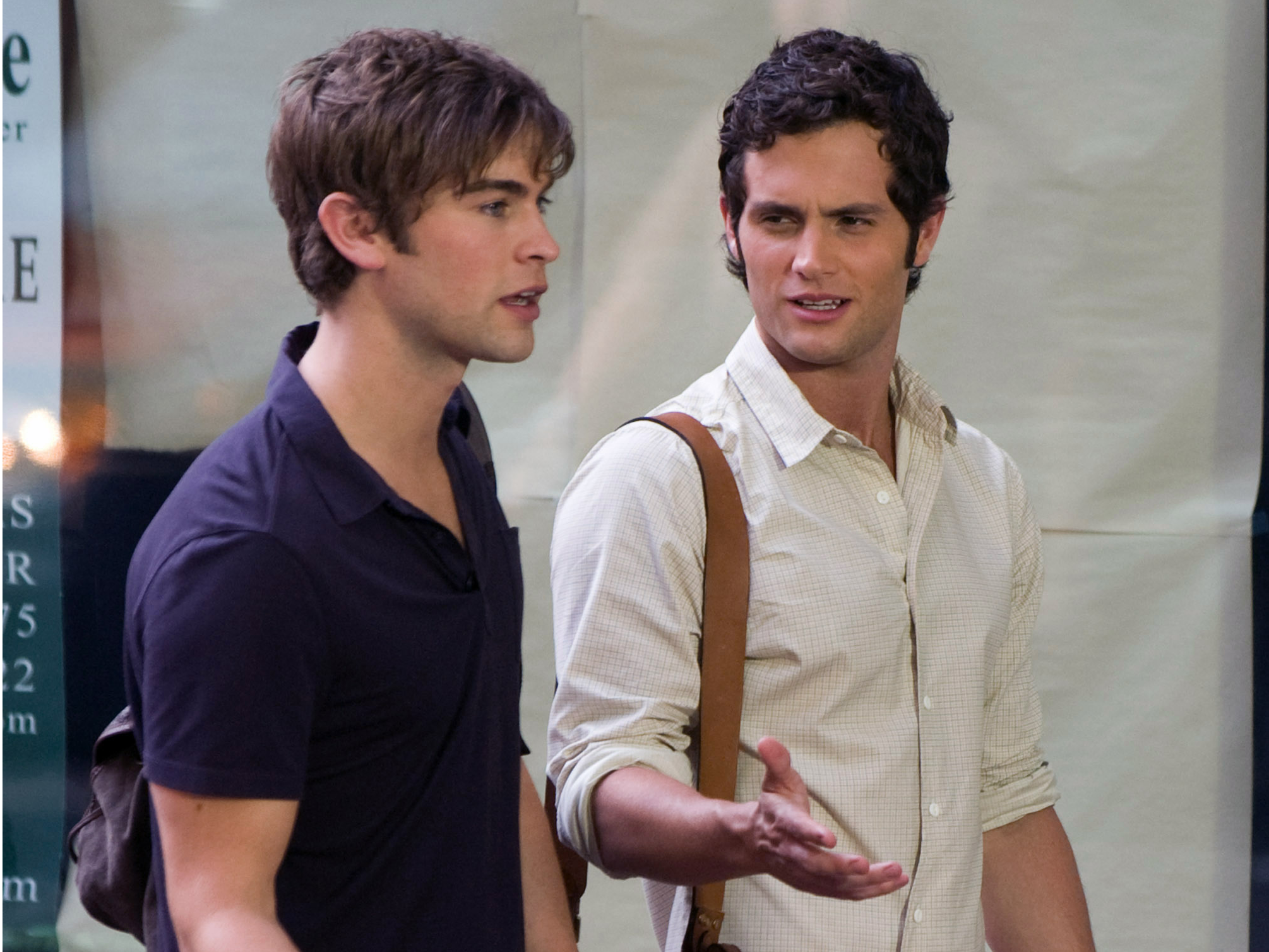 Charles Sykes/APProducers didn’t want it to affect his performance.

The “Gossip Girl” showrunners didn’t want the actors focusing too heavily on who would end up being the mysterious Gossip Girl, so it was not revealed until the final scripts were handed out.

Meester proved she was meant to play Blair Waldorf. 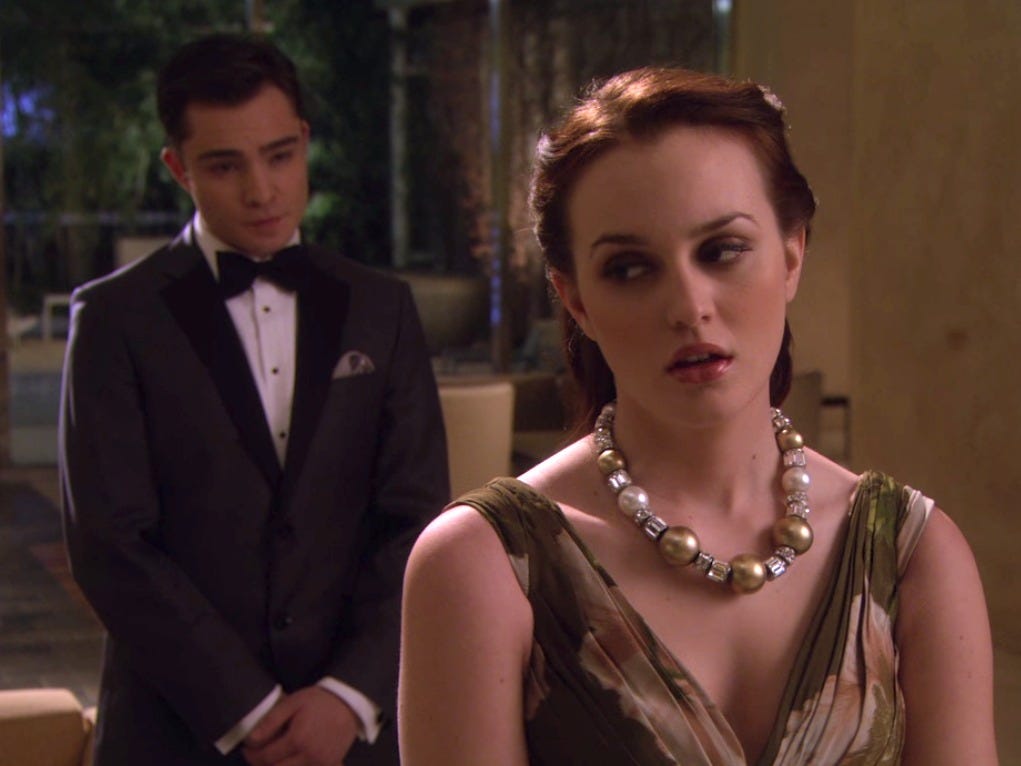 The CWLeighton Meester impressed the producers.

Although Meester seems like the natural fit for Blair Waldorf now, her connection to the character was not always so apparent.

Executive producer Schwartz told Vanity Fair, “She came in and she was really funny, and really smart and played vulnerable. But there was one problem: She was blonde. And Blake was blonde, obviously; Serena had to be blonde. So, [Leighton] went to the sink and dyed her hair. She wanted it.'”

In the same Vanity Fair interview, Chace Crawford, who played Nate, recalled thinking, “I just don’t see her as Blair Waldorf. I can’t see it,” the first time he met Meester at auditions.

Crawford’s mind was quickly changed, however, when Meester turned around “slyly in her chair,” sporting Blair’s iconic headband.

After that, Crawford said “I just remember thinking, ‘That girl can act. She’s the perfect girl for this.'”

Lively shot her “Gossip Girl” wedding just a month after her own. 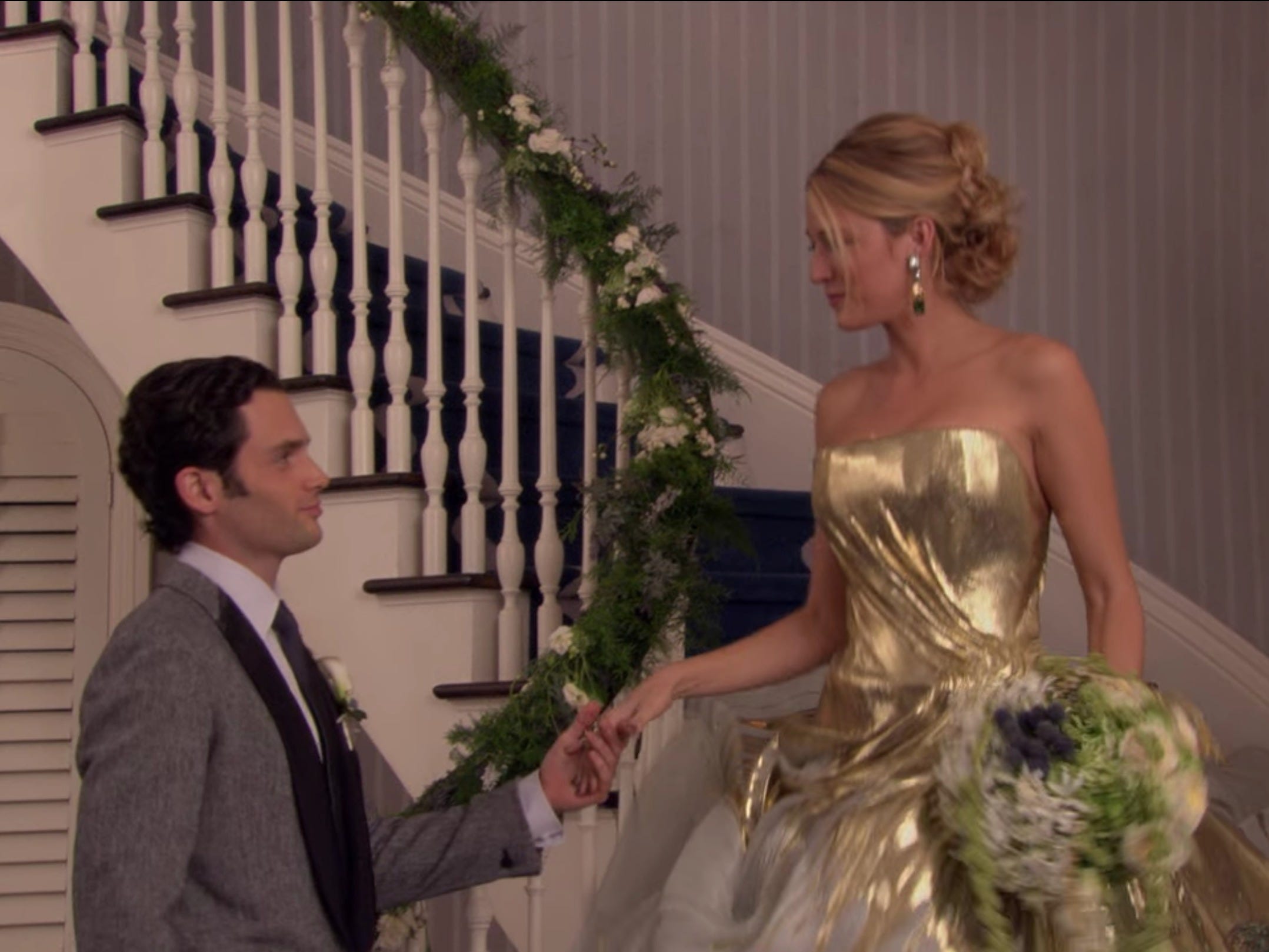 The CWShe wore a stunning gold dress on the show.

Just a month after Lively’s intimate wedding to actor Ryan Reynolds in September 2012, she was spotted on the set of “Gossip Girl” wearing a gold wedding dress.

Fans were left to speculate at the time but later saw the gown on the show’s series finale.

There are a few international “Gossip Girl” spin-offs and remakes. 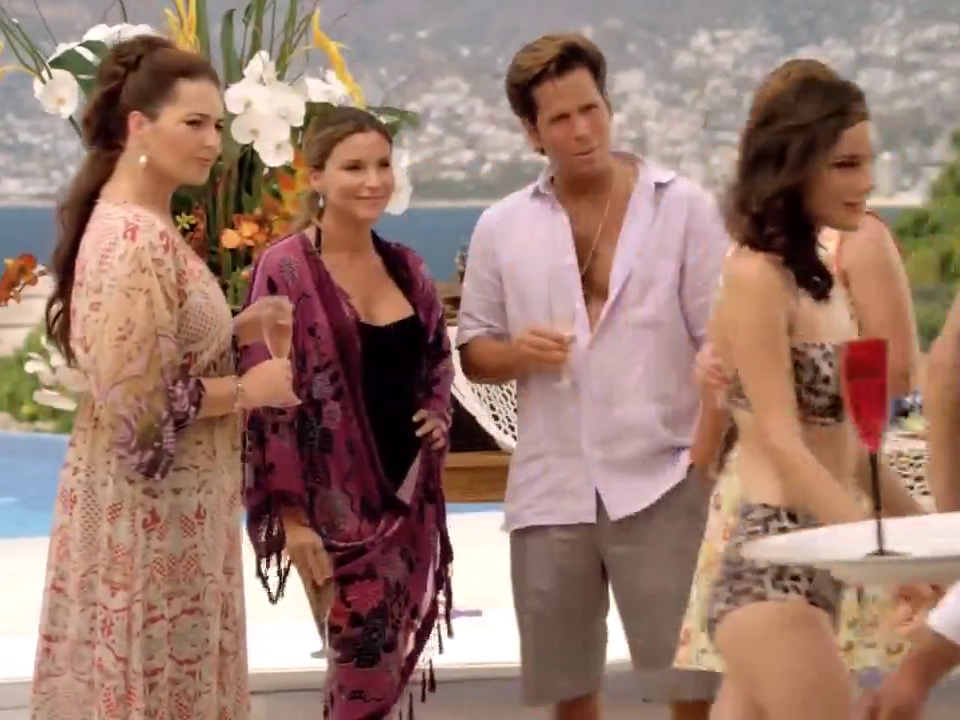 “Gossip Girl” was not only a hit with American audiences, it also was reproduced in a few countries around the world.

Spin-offs and remakes were produced in Mexico, China, Turkey, and Thailand.

Promotional photos for Mexico’s “Gossip Girl: Acapulco” appeared to have the same preppy flair as the original, but the show was not renewed by Univision for a second season.

Fan-favourite Dorota got a spin-off too. 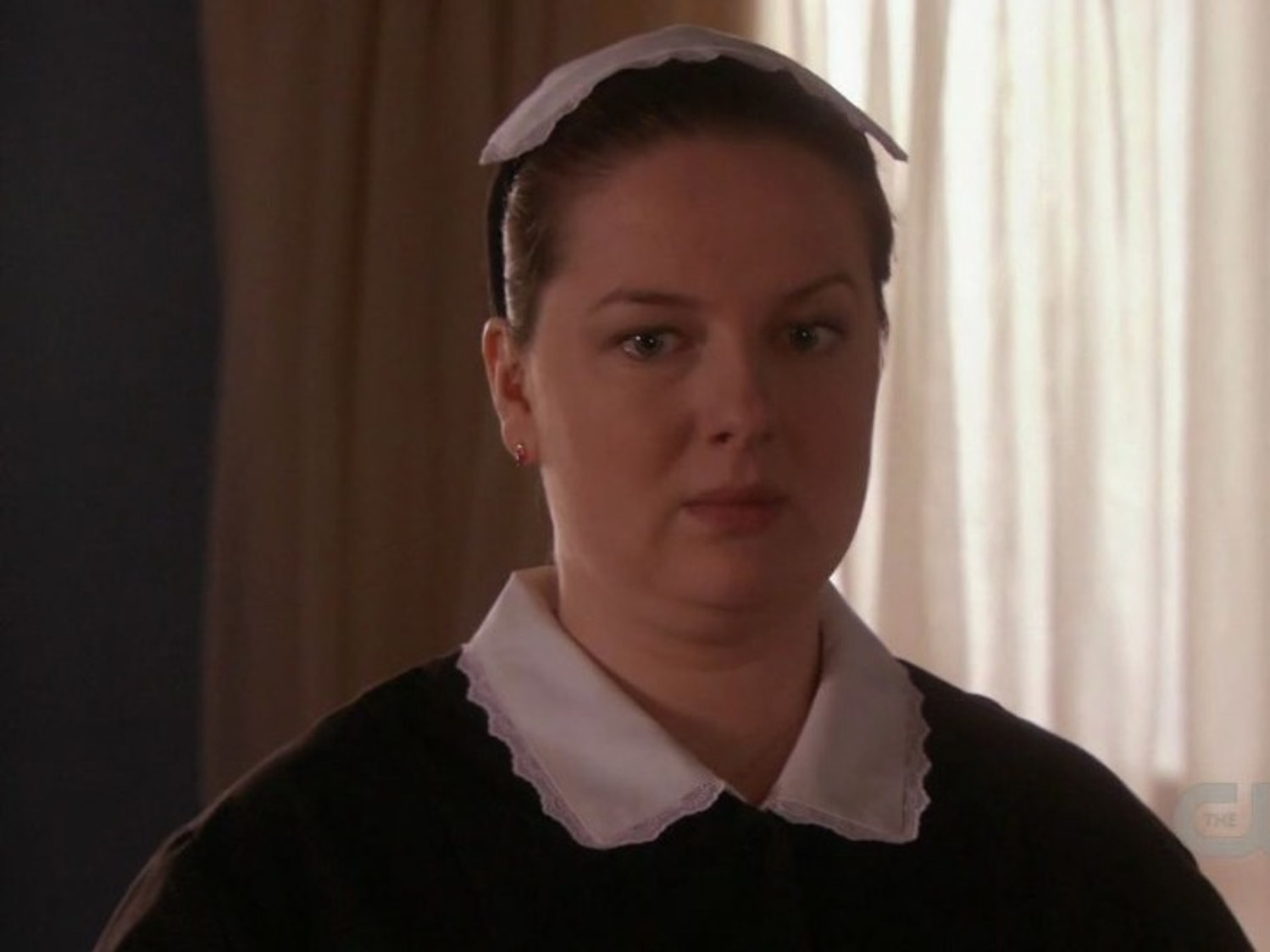 CWDorota briefly had her own show.

One of the most beloved characters from “Gossip Girl” was Blair’s maid, Dorota, played by Zuzanna Szadkowski.

In 2009, the character got the spin-off treatment with her own show, “Chasing Dorota.” The show was cancelled after six episodes, but Szadkowski remained a series regular on “Gossip Girl” until its finale in 2012.

Real Upper East Side teens had a few issues with how the students were portrayed on the show. 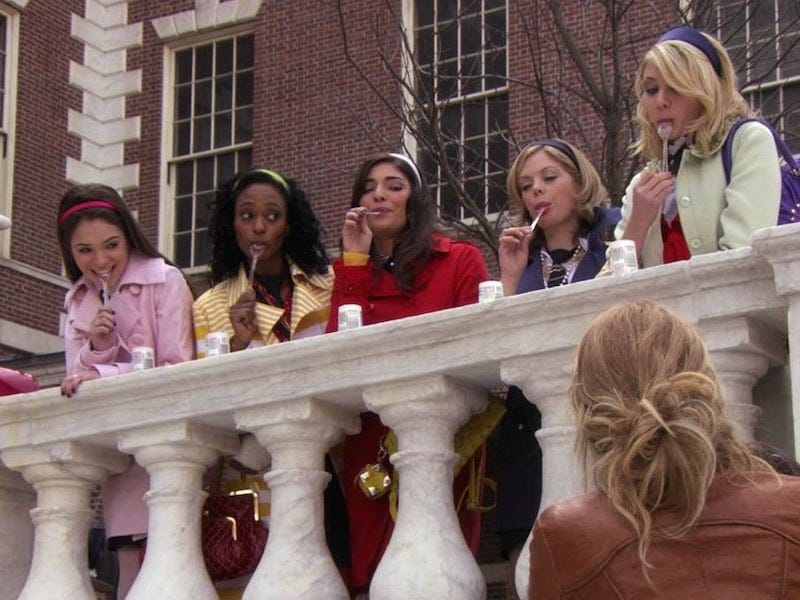 “Gossip Girl” was known for its over-the-top portrayal of New York City’s elite, so it’s not exactly surprising that it received backlash from its real-life counterparts.

According to The Sun, some New York City students said that their schools even imposed bans on watching the show.

Mina Beveney, a 2007 alumna of the Spence School on the Upper East Side, told the publication that although there are “parallels,” much of what the show depicts isn’t realistic.

“I don’t understand how they’re glamorously not doing five hours of homework a night,” she said.

“Gossip Girl” was based on a book series by Cecily von Ziegesar, and the author had one major issue with the TV adaptation. 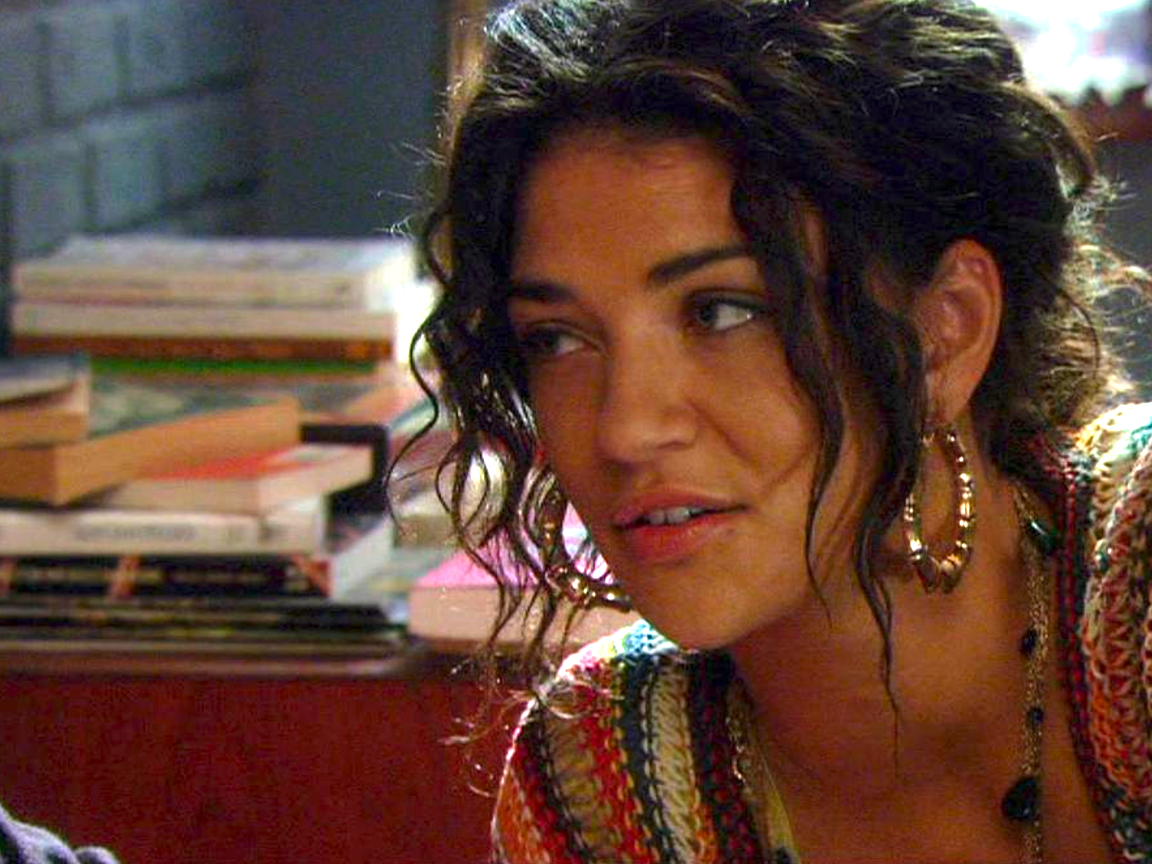 The CWCecily von Ziegesar wasn’t a fan of Vanessa’s character.

“Gossip Girl” is based on a book series by Cecily von Ziegesar.

Though she said she enjoyed watching “Gossip Girl,” von Ziegesar told MTV in 2008 that she did have a major problem with the show.

“I think Vanessa is one character they ruined. In the book, she’s kick-arse and has a shaved head and wears lots of black … and I think a lot of the readers who don’t usually read teen fiction identify with Vanessa,” the author said. “Even though I don’t like Vanessa’s character, it’s nothing against [actress] Jessica [Szohr]. I just wish Vanessa was like she is in the books a bit more.” 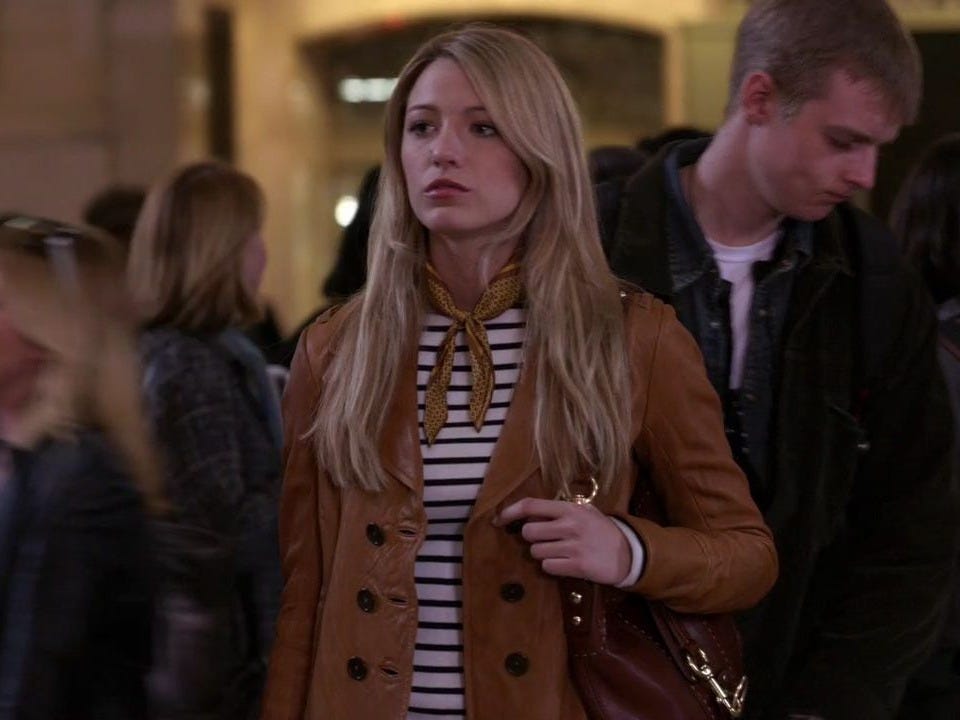 The CWBlake Lively didn’t want the role to get in her way of going to college.

When “Gossip Girl” was picked up, Lively had just started attracting attention from “The Sisterhood of the Travelling Pants” (2005) and was a natural fit for the role of Serena.

According to the 2017 Vanity Fair interview, when approached with the opportunity, Lively told producers, “No, I want to go to college. Thank you, though.”

Lively continued, “Then they said, ‘OK, you can go to Columbia [University] one day a week. After the first year [of the show], it will quiet down. Your life will go back to normal and you can start going to school. We can’t put it in writing, but we promise you can go.’ So that’s why I said, ‘OK You know what? I’ll do this.'”

The show was targeted by hackers who leaked the scripts. 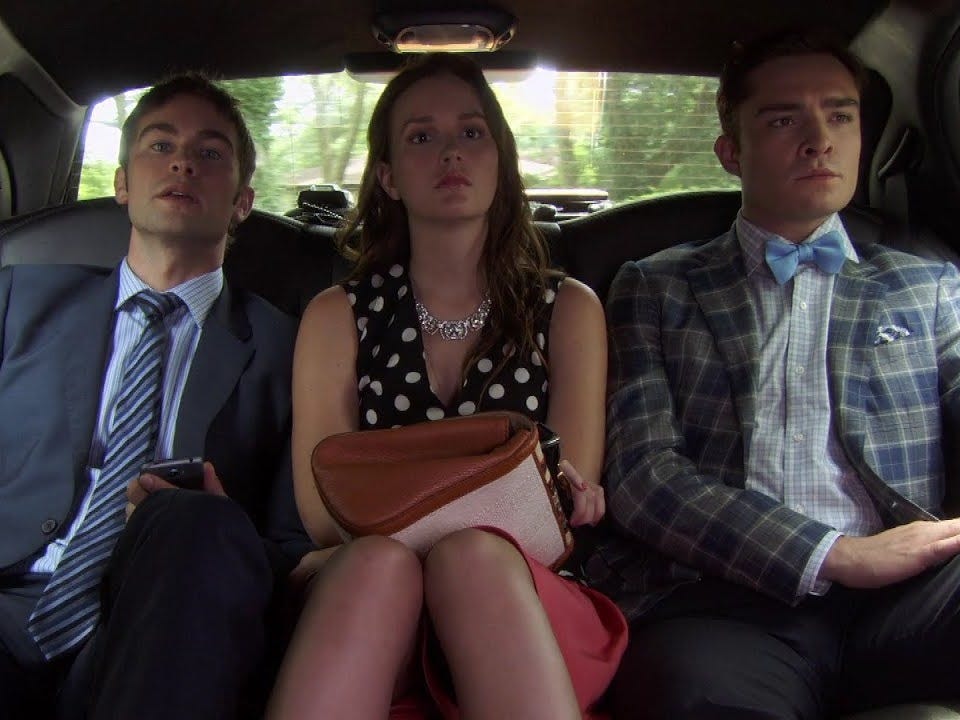 The CWScripts were being leaked on the internet.

While “Gossip Girl” was airing, the show experienced a database breach that led to major script leaks.

According to Vanity Fair, during the fourth season, the producers hired a private investigator after scripts continued to appear online. The investigator later found that they were being sold on eBay by a teenager, who could not be prosecuted due to their age.

Following the hacks, producers printed scripts on red paper or ‘X’-ed out each page to prevent plotlines from being spoiled online.

“It was like there was a ‘Gossip Girl’ in our system,” one producer said.

The costumes had a major influence on retail trends in the 2010s. 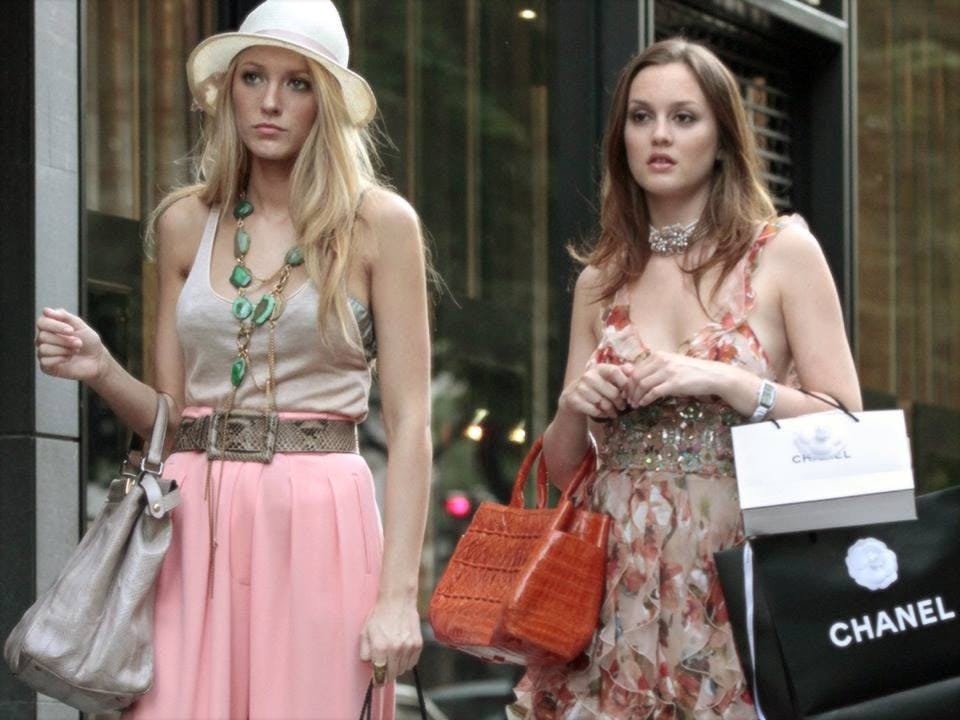 The CWDesigners wanted Serena and Blair to wear their clothing.

The show became so popular that designers were known to line up for a chance to put their clothing on Lively or Meester.

In an interview with Fashionista, costume designer Daman said, “Once we got one bigger designer to say yes, it’s like letting the floodgates open, and early on, Chanel said yes. All of a sudden, everybody wanted to be a part of it.”

Tory Burch was one designer featured on “Gossip Girl,” and she told The New York Times in 2008 that having an item displayed on the show immediately “translates to sales.”

“We have girls coming in with magazine tear sheets of Blake Lively or Leighton Meester, from location shootings or from everyday life,” Burch said.