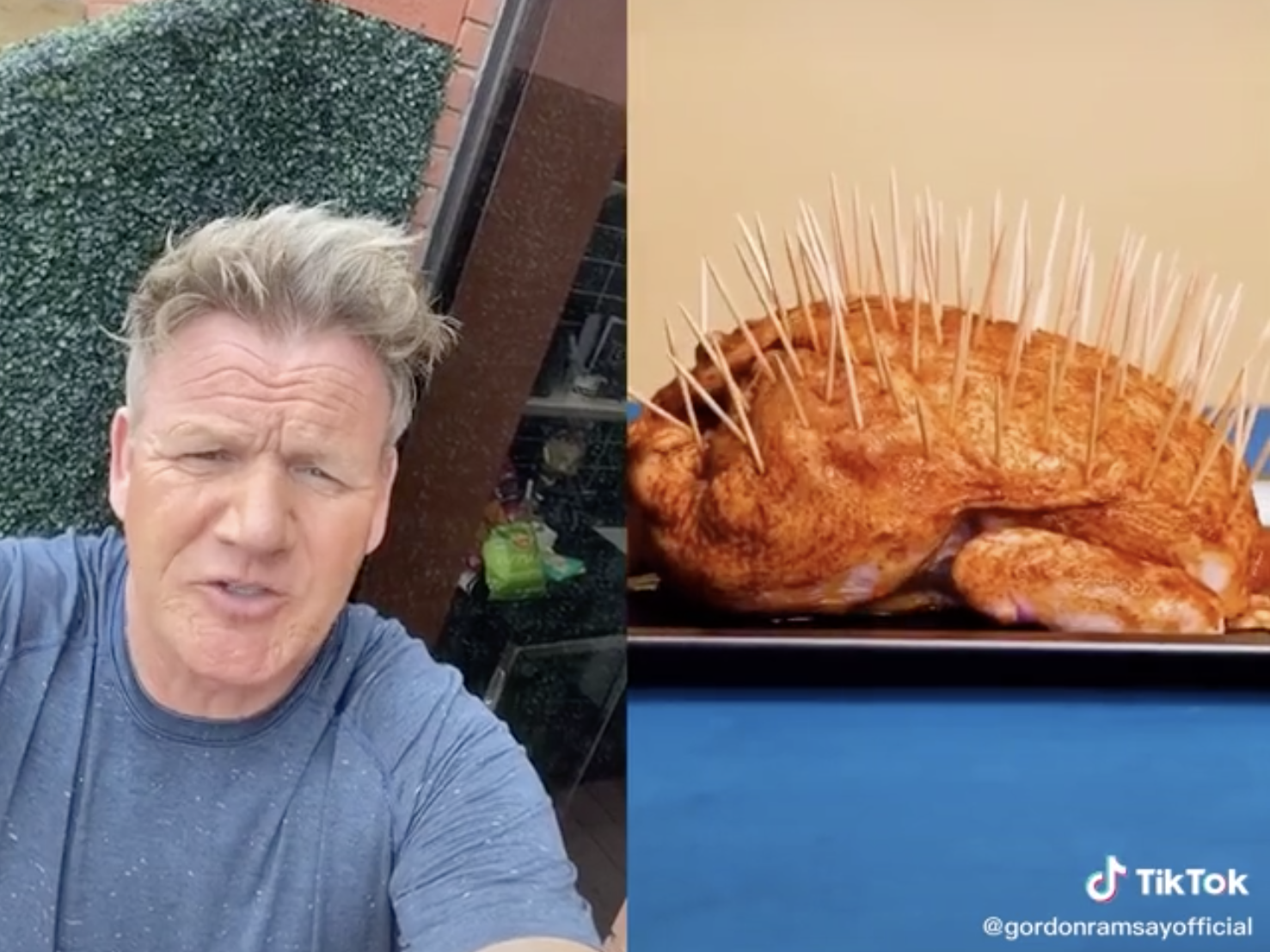 Gordon Ramsay/TikTok/5.minute.recipes/TikTokGordon Ramsay took aim at a home chef who covered their chicken with toothpicks before baking it.

Gordon Ramsay has been on a roll with his TikTok “#RamsayReacts” videos, critiquing nearly a dozen home chefs’ cooking clips over the last few weeks.

Ramsay has taken aim at everything from a grilled cheese stuffed with McNuggets to a cake made entirely out of steak. But it was his horror at a roasted chicken covered in toothpicks that has gotten the most attention.

“Acupuncture doesn’t belong on a chicken!” he wrote in the caption of the video, which has 24.9 million views at the time of writing.

The original clip, posted by TikTok user @5.minute.recipes, first shows a whole raw chicken being coated in an orange sauce. 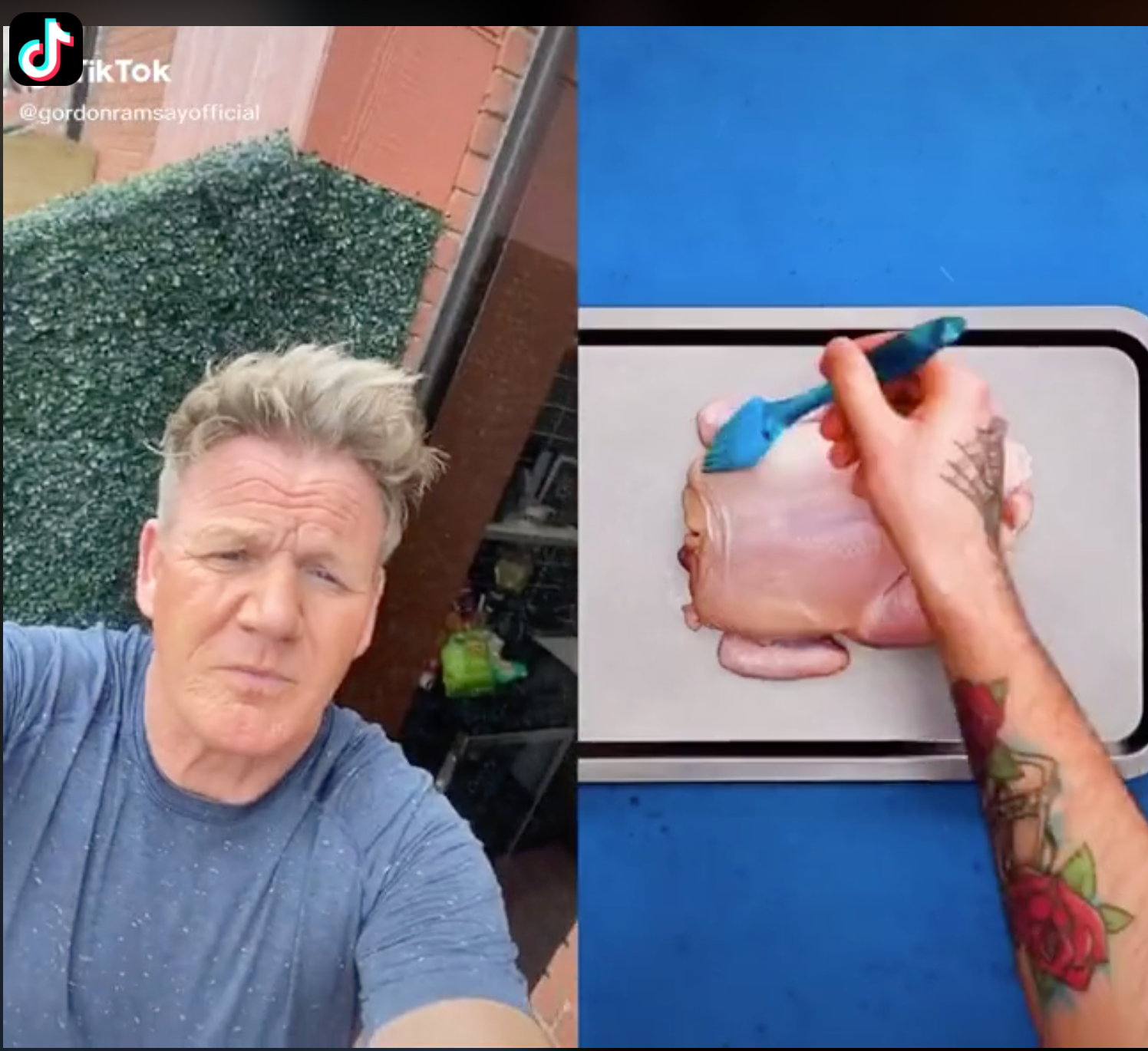 Gordon Ramsay/TikTok/5.minute.recipes/TikTokThe chef first brushes the chicken with some sauce.

“OK, brushing, seasoning,” Ramsay says before a look of confusion crosses his face.

“With cocktail sticks?” he exclaims. “Hold on a minute.”

The chicken is suddenly covered in dozens of toothpicks, much to Ramsay’s dismay. 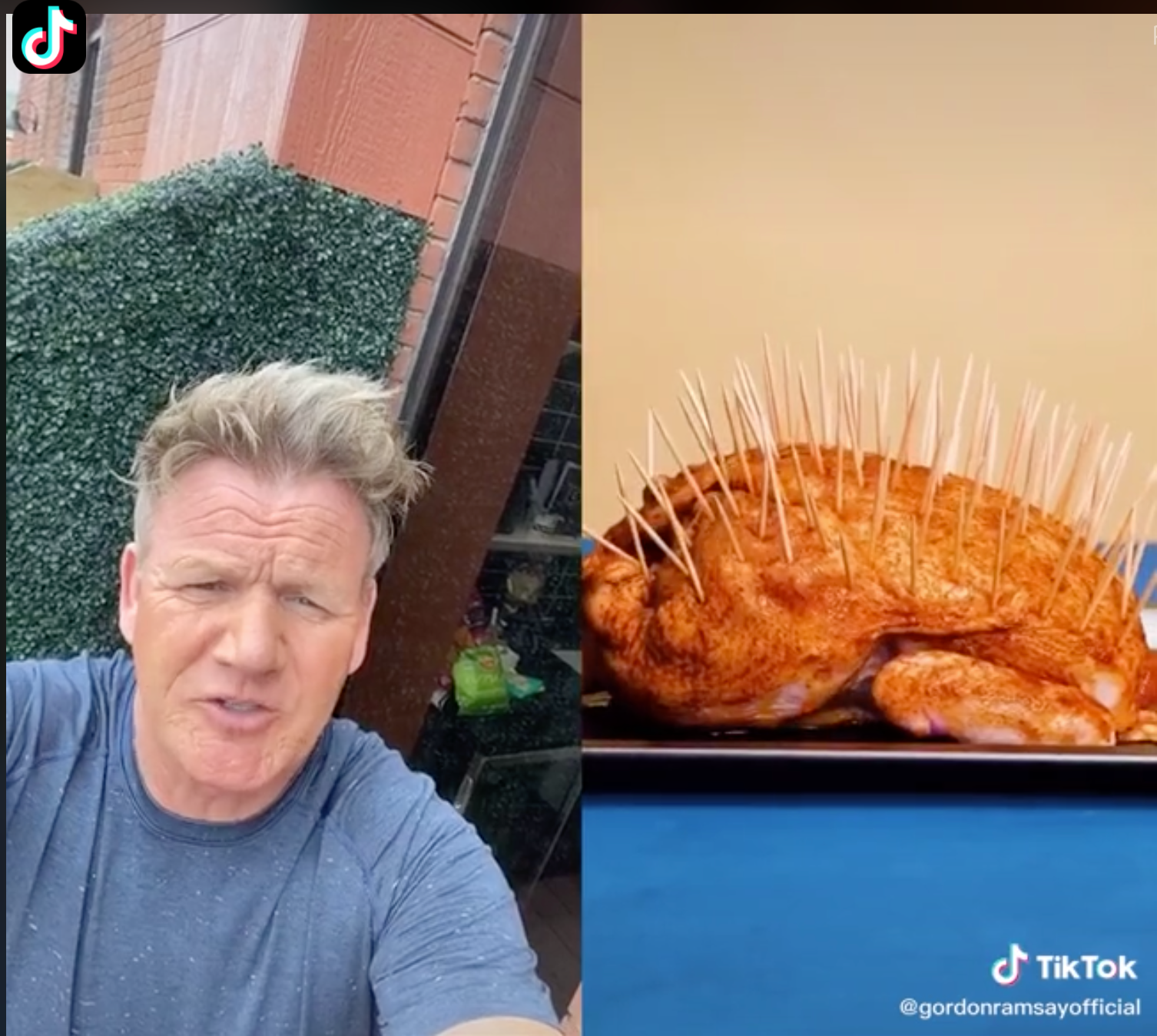 Gordon Ramsay/TikTok/5.minute.recipes/TikTokRamsay is appalled as the chef pokes the chicken with dozens of toothpicks.

“Performing acupuncture on a chicken? You’re supposed to cook it, not prick it!” he says.

The TikToker then puts the chicken into the oven, toothpicks still intact. 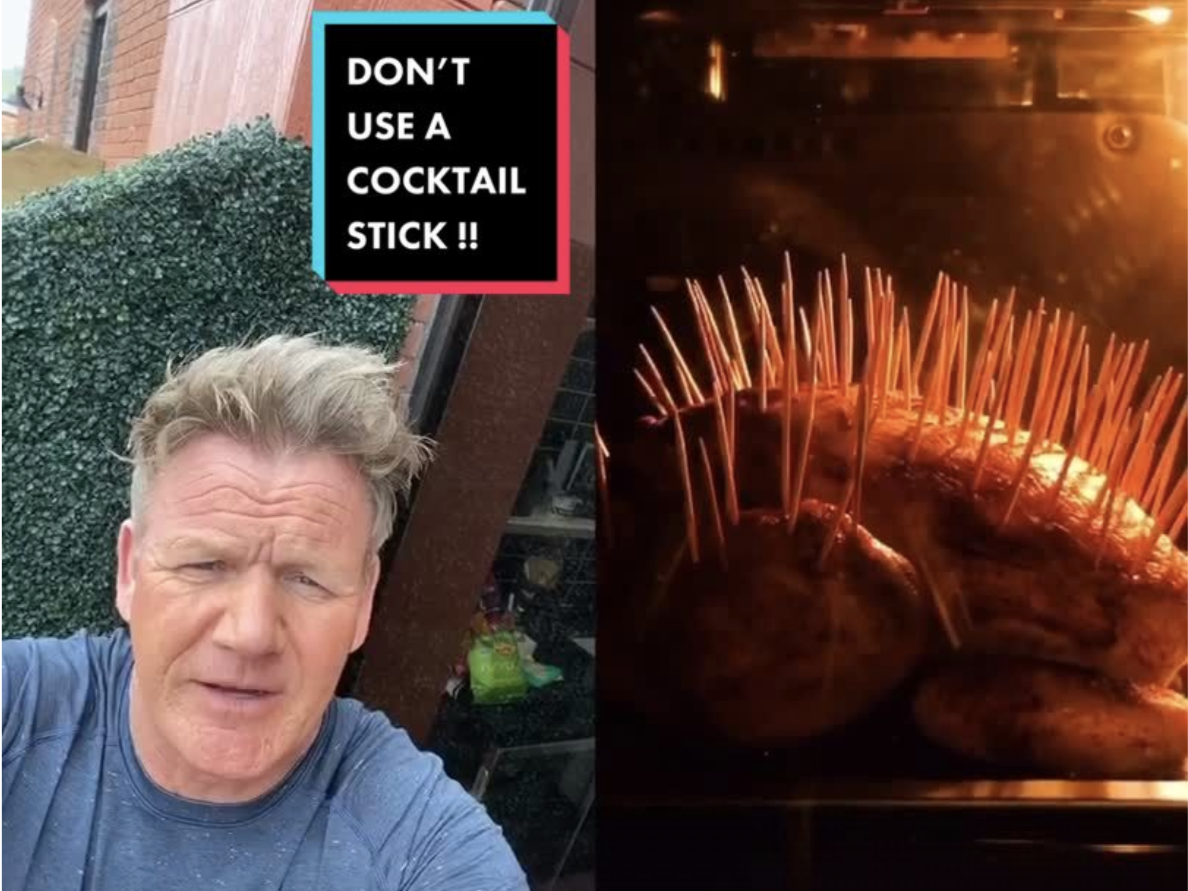 Gordon Ramsay/TikTok/5.minute.recipes/TikTokThe toothpicks remain in the chicken as it’s popped into the oven.

As it’s taken out of the oven, Ramsay can’t hold back his look of disgust.

“Oh my goodness me,” he exclaims. “No, that looks dry! You’ve turned the chicken into a hedgehog!” 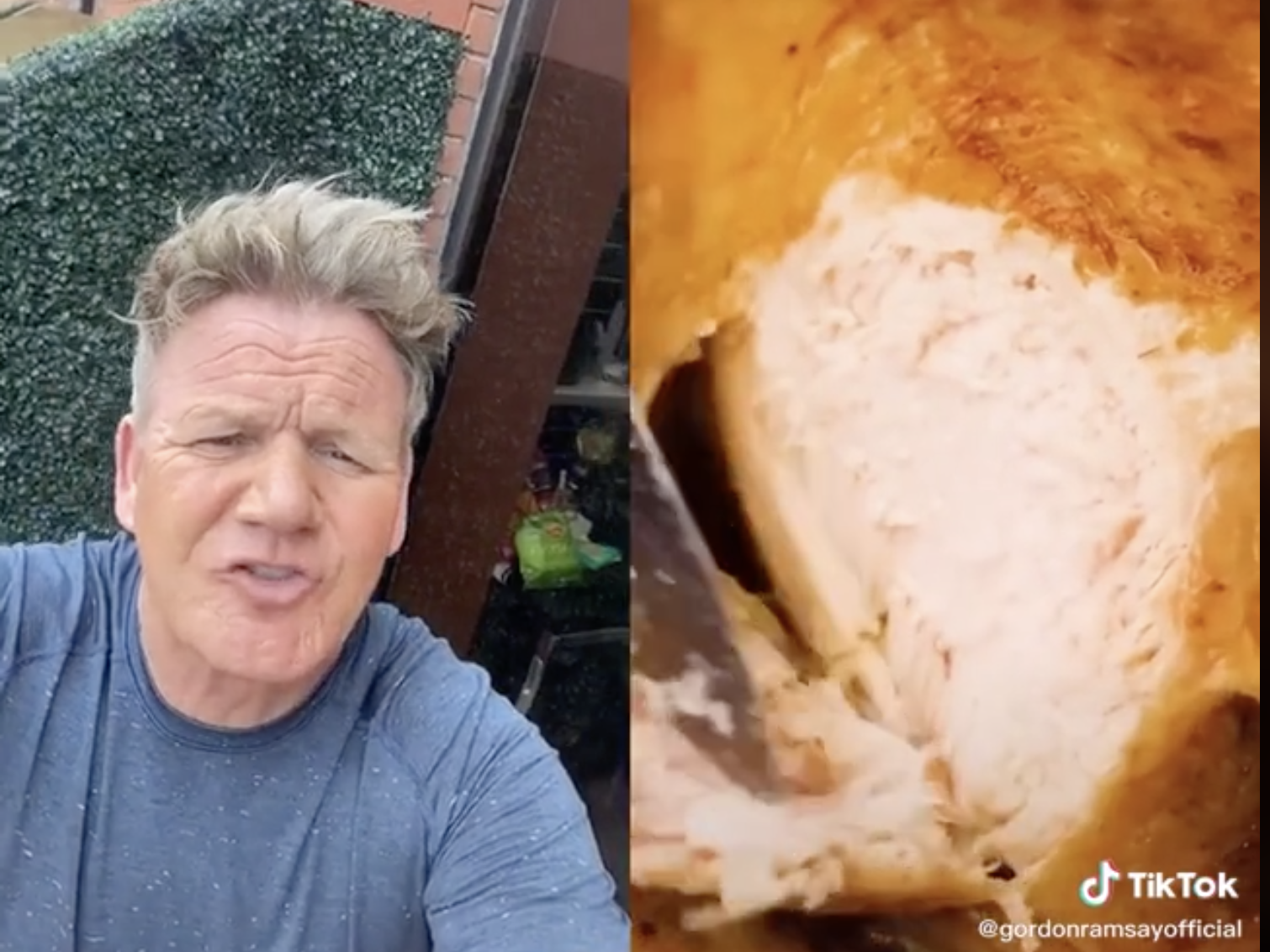 Gordon Ramsay/TikTok/5.minute.recipes/TikTokRamsay yells that the chicken looks dry as the chef cuts into it.

It remains unclear why the recipe for the chicken involves dozens of toothpicks. The original video offers no explanation, though the caption (“juicy meat”) as the knife cuts into the chicken at the end of the clip seems to suggest that the toothpick method might be meant to make the chicken juicier. In Ramsay’s view, it looks like that was a fail.

But the Michelin-starred chef didn’t use his iconic “idiot sandwich” insult, which has popped up in a number of recent #RamsayReacts videos.

Ramsay rehashed his favourite comeback while watching TikTok user @caughtsnackin‘s video of a grilled cheese sandwich being made with McNuggets and fries â€” which he called “McCrap.”

“Whoever made this is an actual idiot sandwich!” Ramsay wrote in the caption of his reaction clip.

Ramsay also used the iconic insult back in August while critiquing a TikTok video that showed a food blogger making a “sandwich” with bell peppers in place of bread.

“That is not a sandwich,” Ramsay exclaims in the clip. “No, that is not a low-carb sandwich. Young lady, that there is an idiot sandwich!”