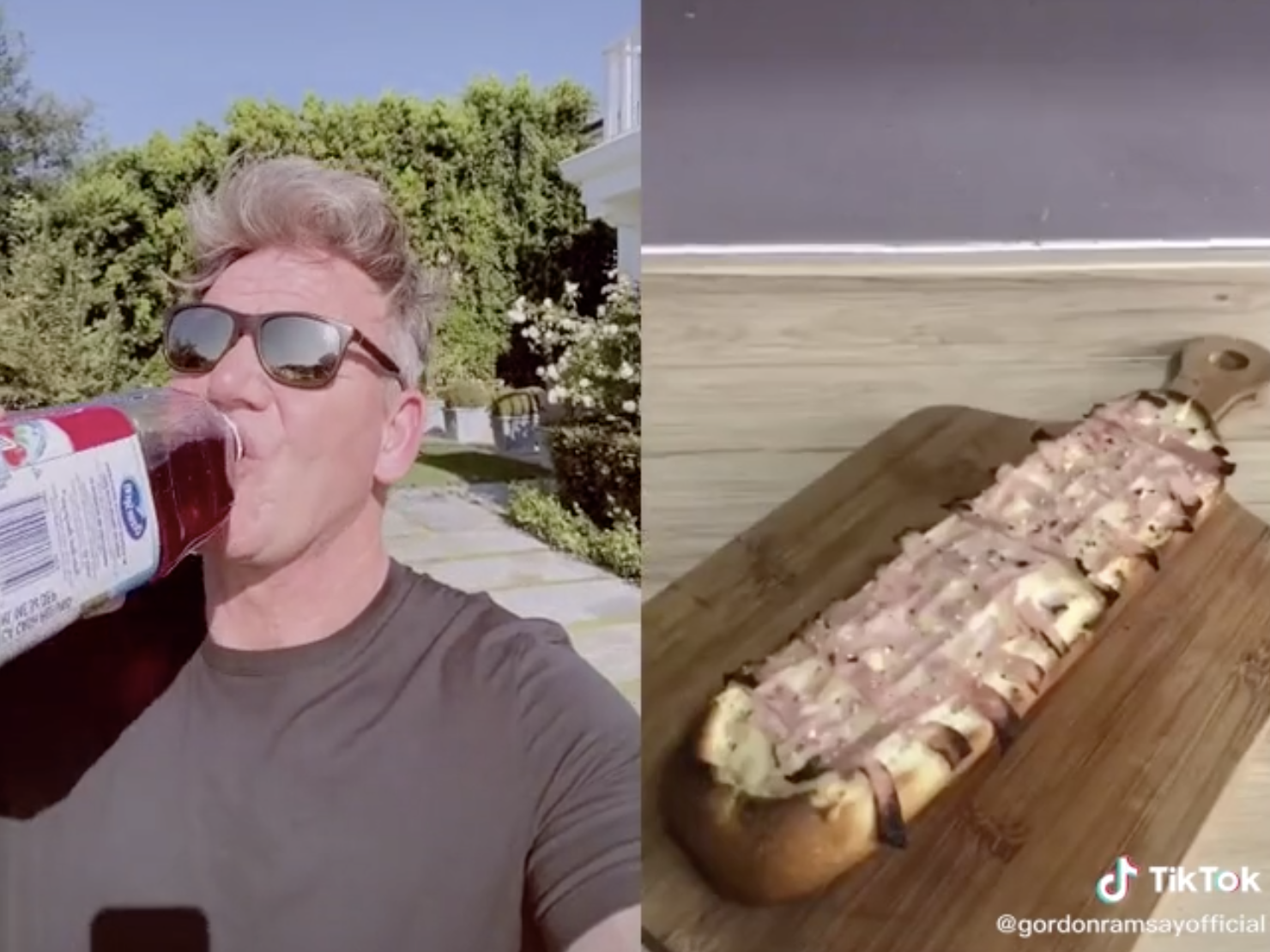 Gordon Ramsay has become a hit on TikTok with his popular #RamsayReact videos, but the Michelin-starred chef took some inspiration from another social-media star for his new clip.

But Ramsay gave the clip his own twist, ditching the skateboard to do what he knows best: critiquing home chefs.

“Afternoon Vibes… did I do this right @420doggface208?” he wrote in the caption of the video, which has been viewed more than 42.8 million times at the time of writing.

This time the “MasterChef” star took aim at Steve Devereux, who posted a video of himself making a baguette sandwich with beans and ham on his popular TikTok account @foodmadesimple.

The clip begins with Devereux hollowing out the baguette as Fleetwood Mac’s 1977 hit “Dreams” plays in the background. 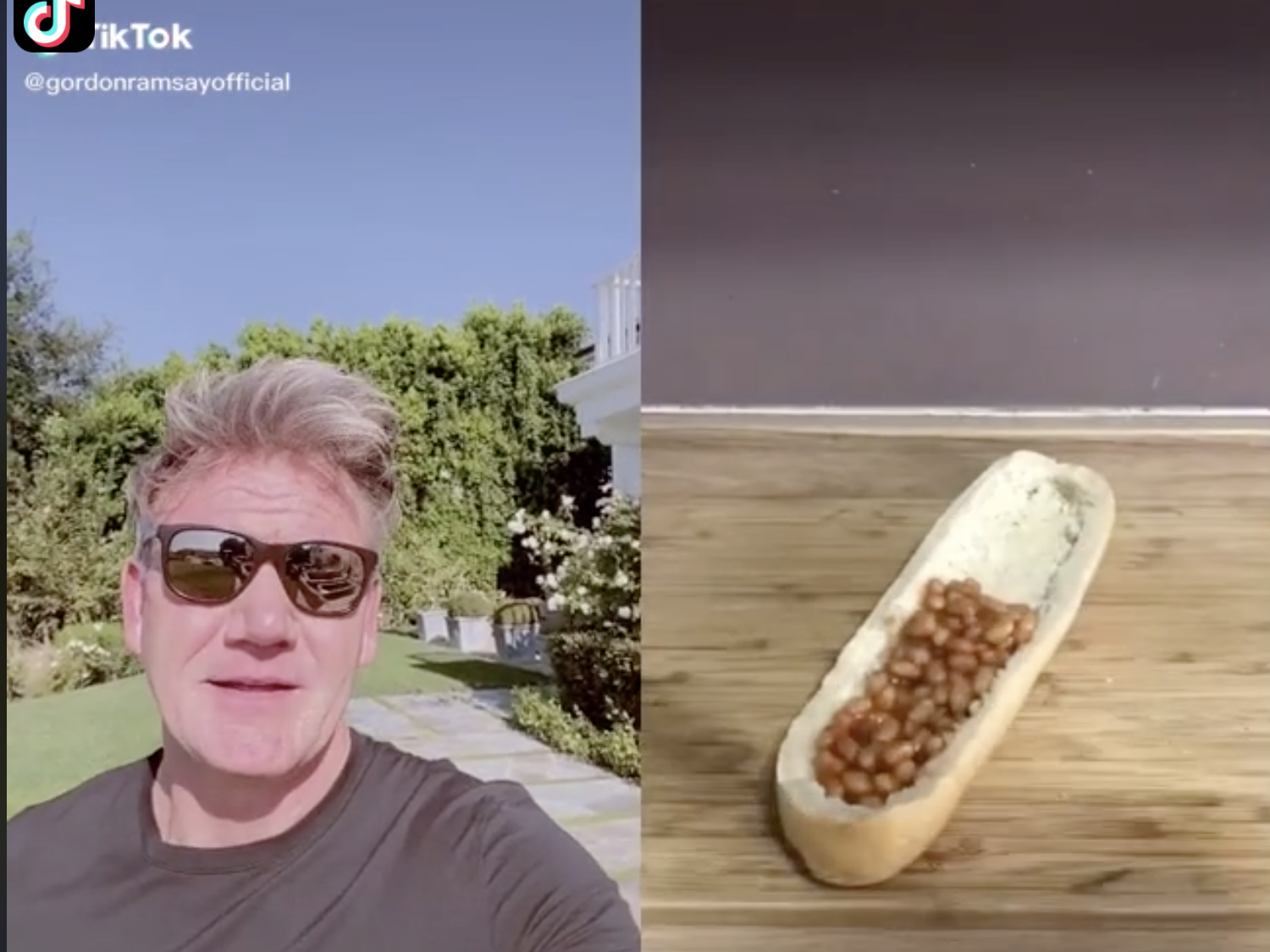 Gordon Ramsay/TikTok/Foodmadesimple/TikTokRamsay was already confused as a baguette was filled with baked beans.

Then Devereux fills the baguette with baked beans and grates cheese right on top.

Devereux then cuts ham into thin slices, arranging them in a checker pattern right on top of the bread.

“Oh my god, what are you doing?” Ramsay says as he watches. “Playing chess with some baked beans?” 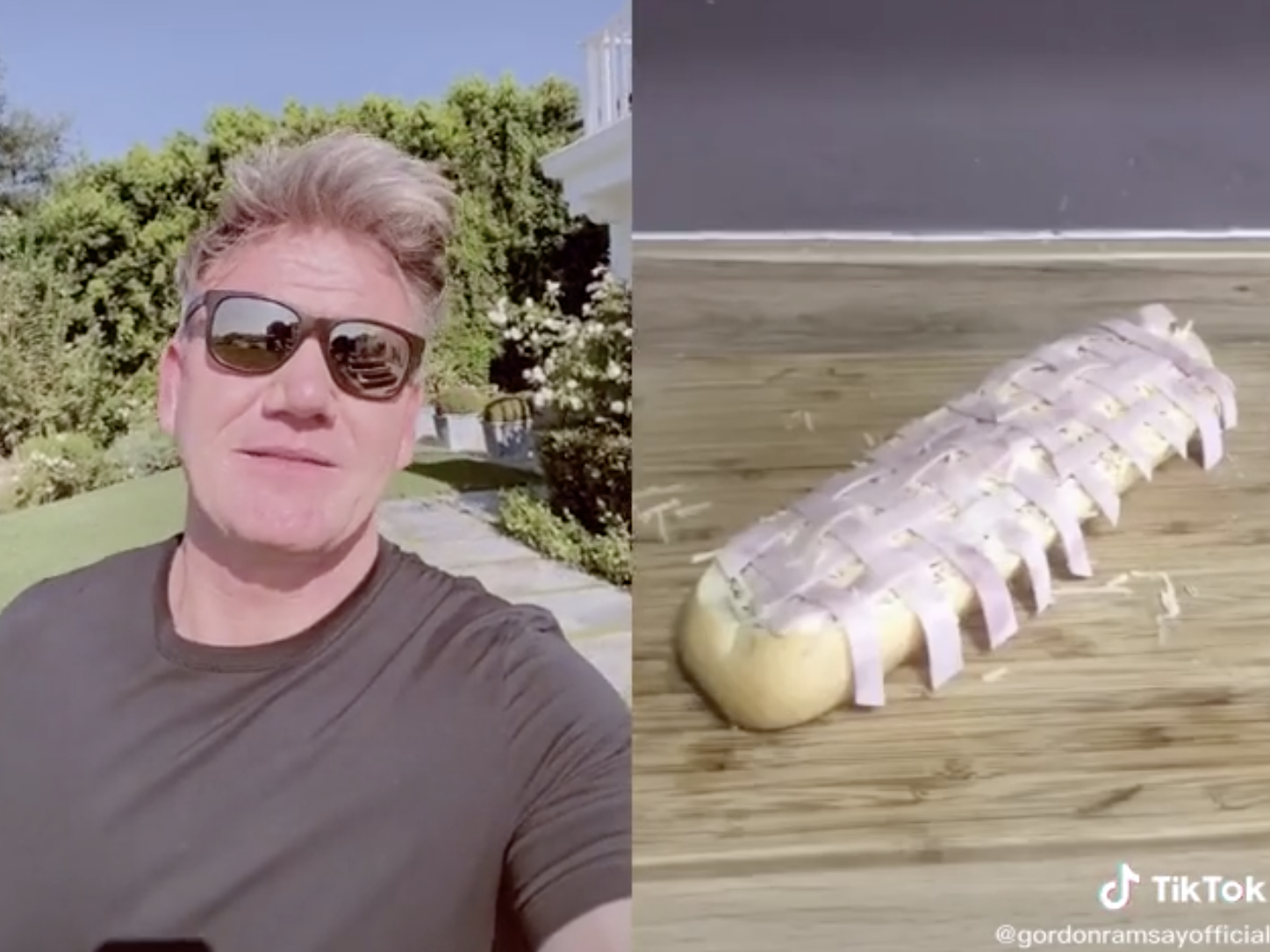 Gordon Ramsay/TikTok/Foodmadesimple/TikTokThen Devereux placed slices of ham in a checker pattern on top of the cheese.

As Devereux toasts the sandwich, Ramsay pulls out a bottle of Ocean Spray cranberry juice â€” just as Apodaca drank in his viral video.

As Devereux drizzles some HP sauce on top of the sandwich, Ramsay can’t hold back his disgust. 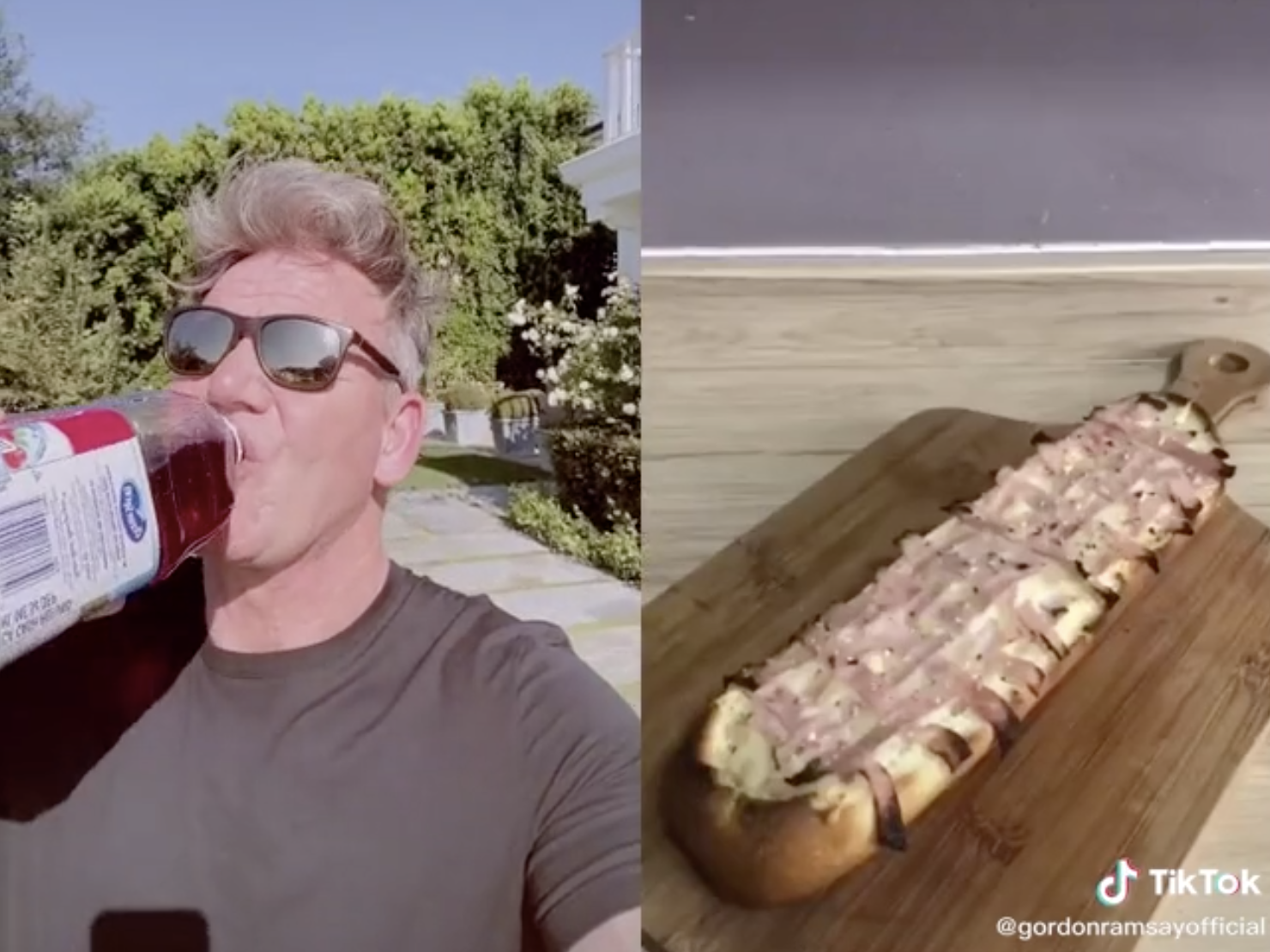 Gordon Ramsay/TikTok/Foodmadesimple/TikTokRamsay took out a bottle of cranberry juice as the sandwich was toasted.

The chef spits out the cranberry juice all over his shirt, yelling: “HP SAUCE?!”

“I’ve no interest in being famous, I’m just having fun,” he added. “I love food and reading comments on my video. This is the ultimate comment to get Gordon’s reaction.”

Devereux hadn’t even tagged Ramsay in his original TikTok, as most home chefs do in their hopes to get noticed by the “MasterChef” star. He had just seen the viral video from Apodaca â€” which has been viewed more than 65 million times on TikTok â€” and decided to make a cooking clip to the iconic Fleetwood Mac song. 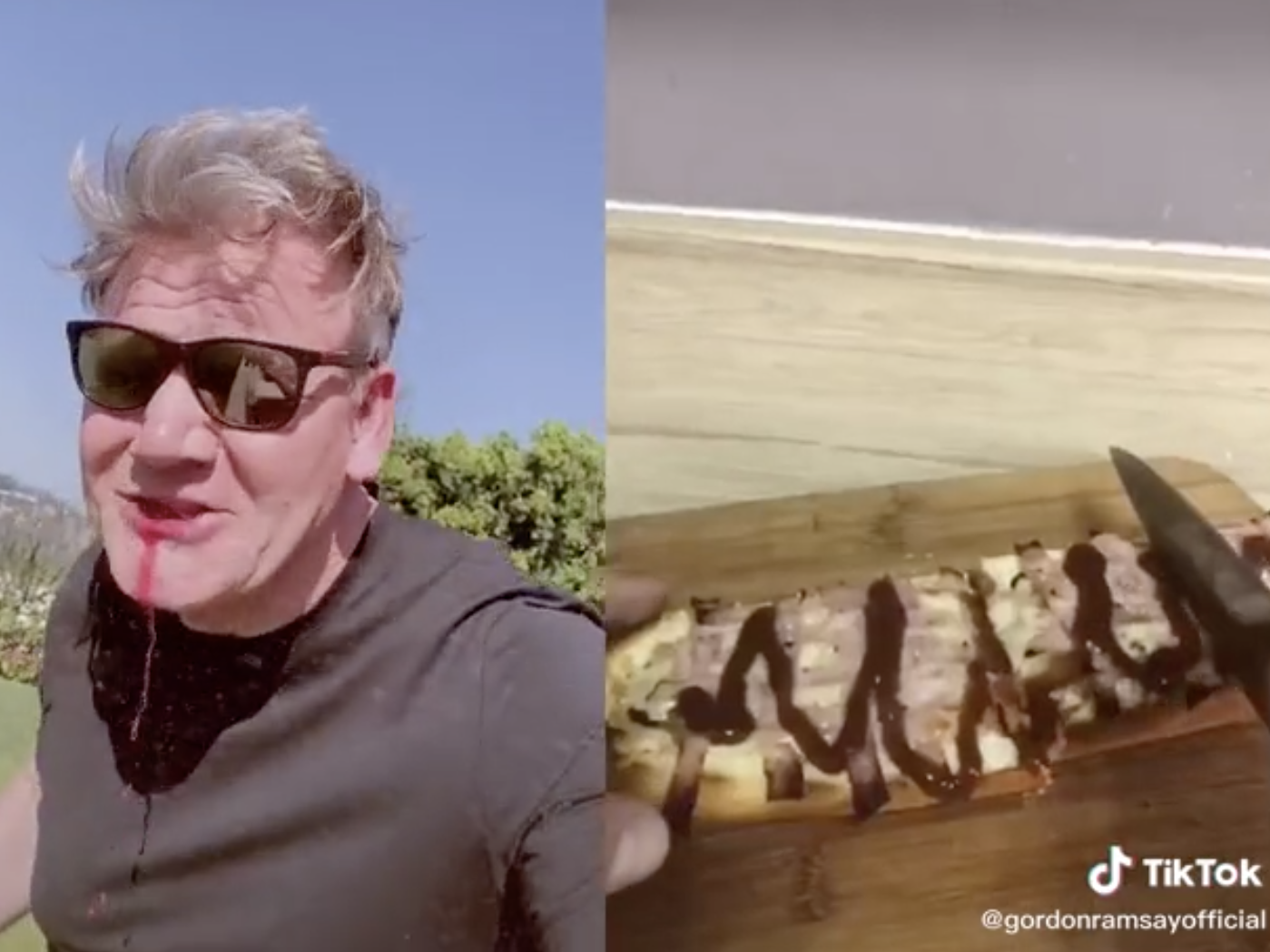 Gordon Ramsay/TikTok/Foodmadesimple/TikTokRamsay spit out the juice as Devereux added HP Sauce on top.

“On the morning I made the video, I didn’t have much food in,” Devereux said. “A leftover baguette, cheese, and a few slices of ham and some beans. I wanted to make my 11-year-old son Jack breakfast, so I just put it together. I always like to try new things. I get especially creative when I have limited ingredients.”

It was Jack who actually messaged Ramsay on TikTok and asked him to watch the video.

Devereux is a longtime Ramsay fan, and couldn’t believe the legendary chef noticed his cooking clip

The home cook said he was shocked when his partner woke him up and told him to check TikTok.

“I couldn’t believe it. I was so happy when I realised it was real,” Devereux added. “I actually laughed at his reaction. I love the video. He wasn’t too mean to me either.”

Devereux has been a “massive fan” of Ramsay for decades, and said he wanted to thank the chef for taking notice of his cooking clip.

“I can’t convey in words just how much this has meant to me and my children to see this,” he added.

Representatives for Apodaca did not immediately respond to Insider’s request for comment.