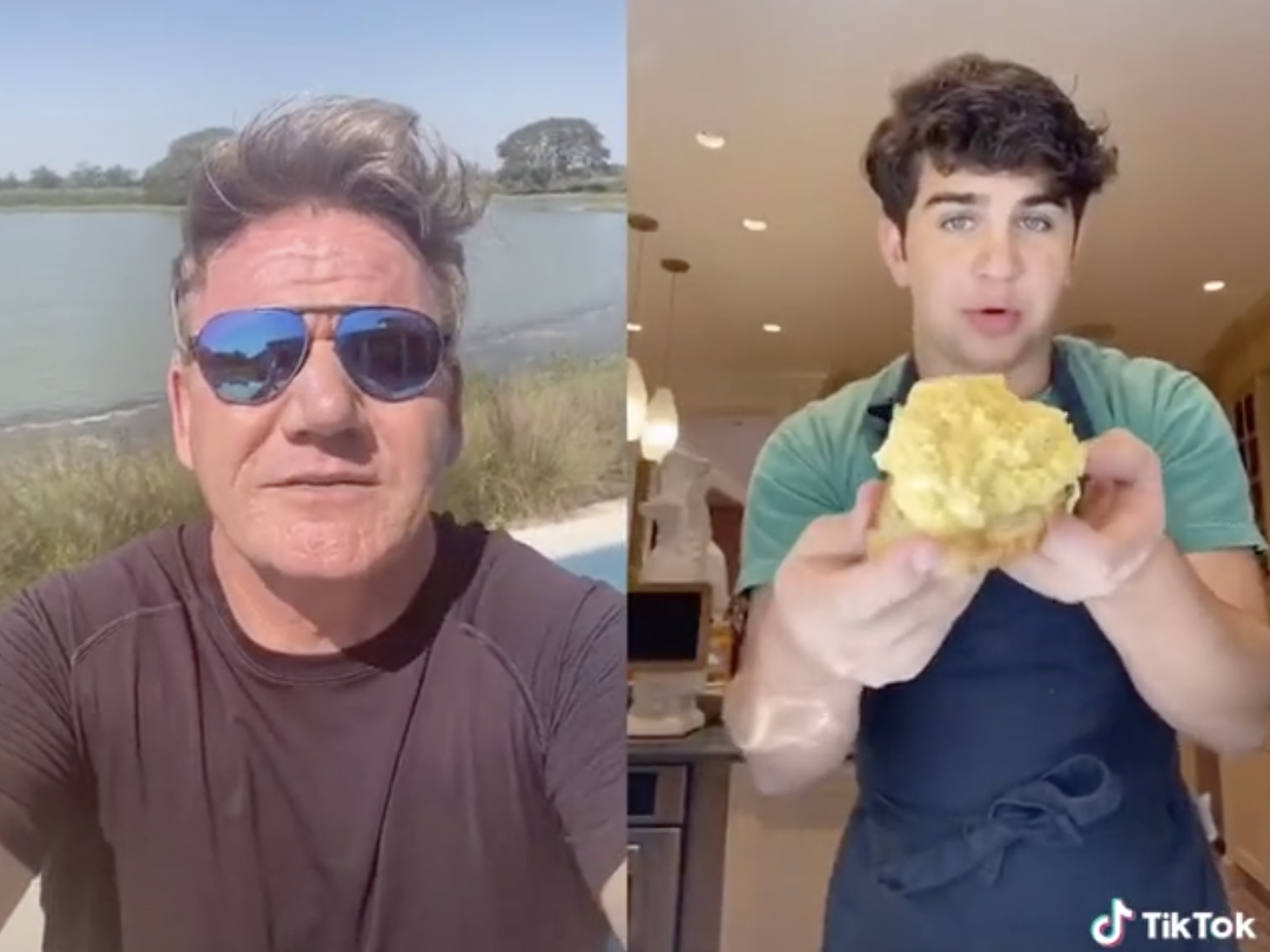 Gordon Ramsay/Tik Tok/Matthew Merril/TikTokGordon Ramsay roasted a food blogger who made his scrambled eggs on TikTok.

Gordon Ramsay is still having a blast critiquing home chefs on TikTok, and this time he’s taking aim at a food blogger who dared to demonstrate one of his recipes.

“There’s only one nob in this recipe and it’s not the butter!” he wrote in the caption of his #RamsayReacts video, which has more than 8.3 million views at the time of writing.

@gordonramsayofficial##duet [email protected] Theres only one nob in this recipe and itsnot the butter !! ##fyp##ramsayreacts##tiktokcooks 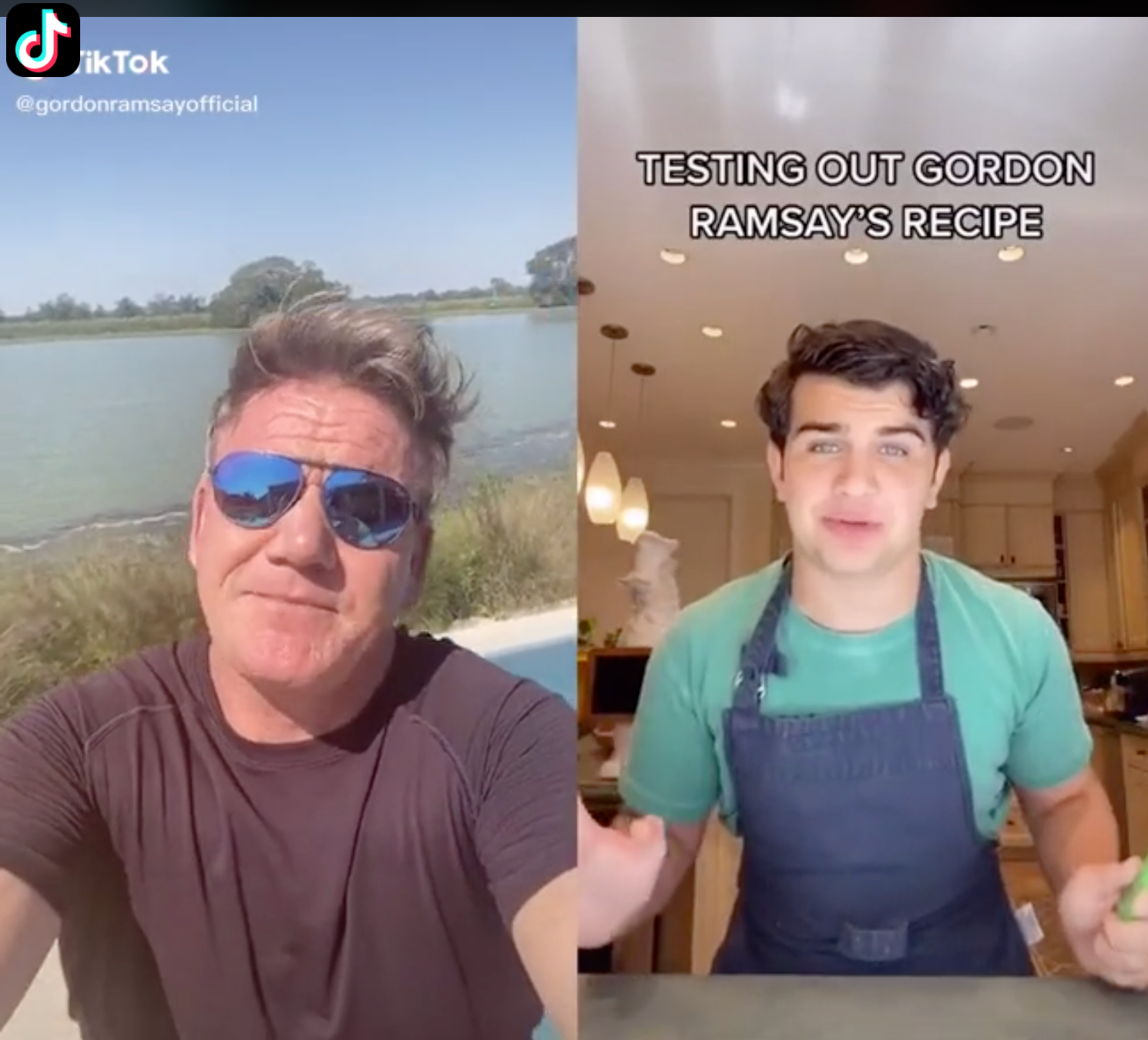 The stakes were already high as Merril began, with Ramsay noting that his “incredible” scrambled-egg recipe has more than “65 million hits on YouTube.”

“Don’t screw it up,” Ramsay added.

But even before Merril got cooking, Ramsay was ready with criticism as the young chef debated just how much a “knob” of butter was. Gordon Ramsay/Tik Tok/Matthew Merril/TikTokMerril was confused over what Ramsay meant by a ‘knob’ of butter.

“OK a teaspoon, smarta–. Come on, really?” Ramsay exclaims. “Too much butter.”

Merril then places his cold pot – with three eggs and the butter inside – on high heat and attempts to follow Ramsay’s very specific cooking instructions.

For his recipe, the Michelin-starred chef said it’s crucial that you don’t whisk your eggs until they’re on a high flame. Then he instructs that you move the pot on and off the flame several times to protect the eggs from overcooking.

“Place on high heat, be constantly stirring,” Merril tells his viewers as he attempts to follow the recipe, taking his pot on and off the heat.

“Don’t overstir it, you’ll break it up!” Ramsay exclaims as he watches Merril. “Take your time, don’t overwhip it!” Merril then adds the crème fraîche, an essential component of Ramsay’s recipe as it helps to stop the cooking process.

“Gentle on the crème fraîche. Oh come on, what’re you doing!?” Ramsay tells Merril as the young chef continues to season his eggs with salt and pepper.

Merril then uses a plastic spatula to spread his scrambled eggs over a piece of toast. 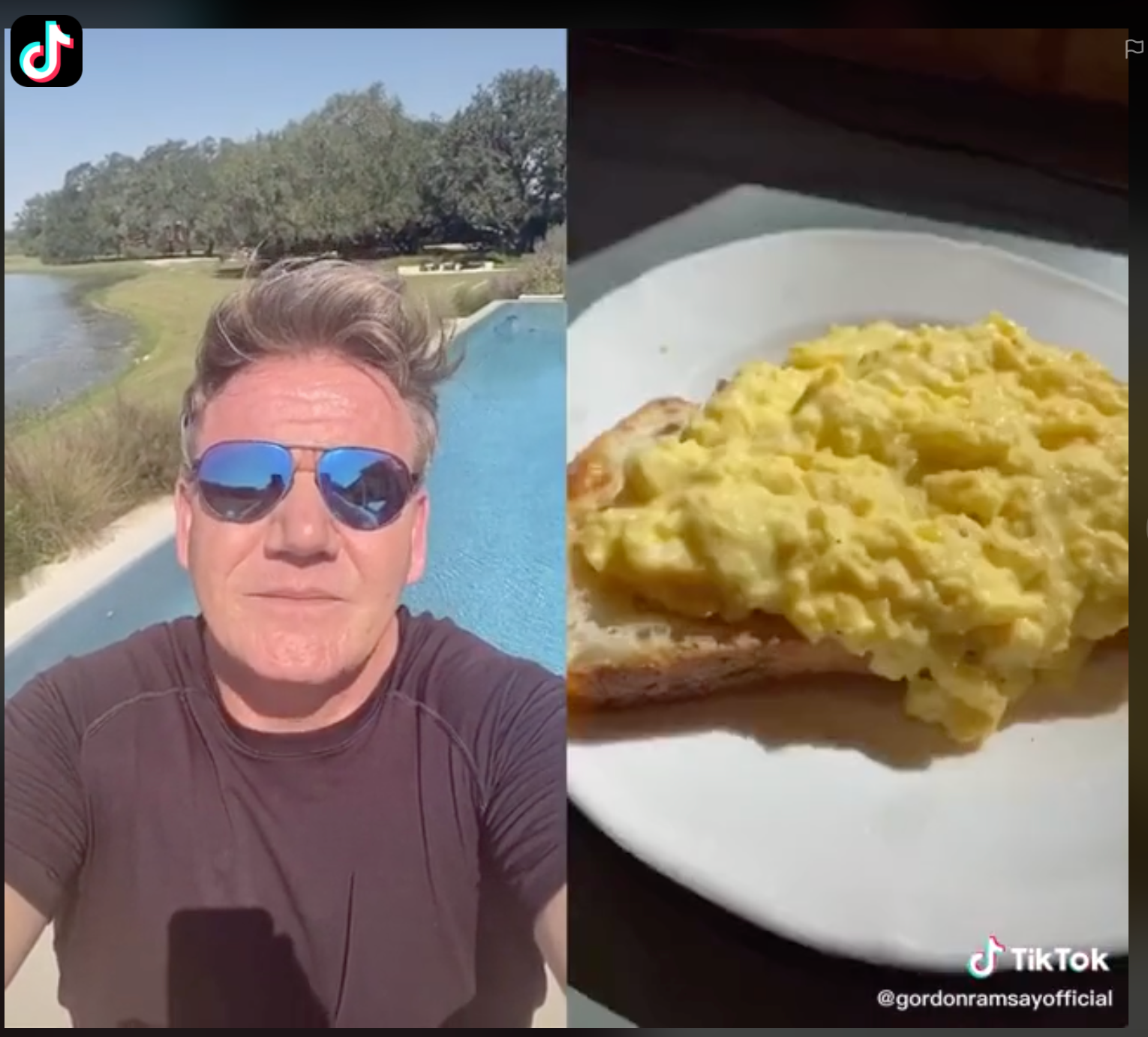 “Moment of truth,” Merril says as he takes a bite of his eggs, clearly impressed. “You win this time Gordon, this is great. It must have been those knobs of butter!”

“Truthfully, you’re such a knob,” Ramsay says as the clip comes to an end.

Merril, who went viral earlier this year for his TikTok cloud bread video, told Insider that he decided to make Ramsay’s scrambled eggs because it was the first cooking video he ever watched.

“His intricacy with something seemingly so simple is definitely appealing,” he said.

Merril said he was “definitely hoping” that Ramsay would see his cooking demo, and knew that the “MasterChef” star would “of course find something to critique.” 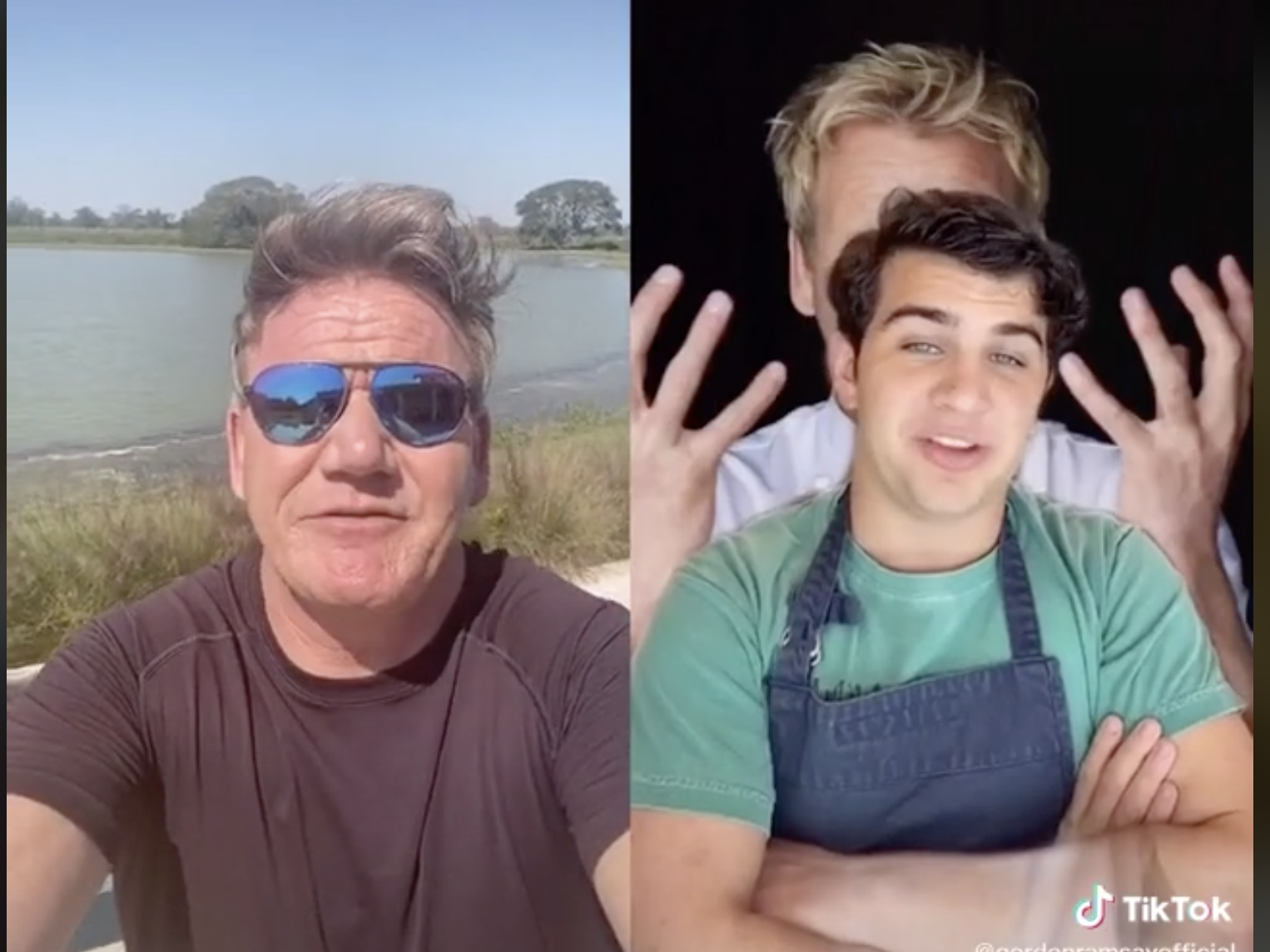 Gordon Ramsay/Tik Tok/Matthew Merril/TikTokMerril told Insider it was an honour to be roasted by one of his cooking heroes.

And the young chef couldn’t hold back his excitement when a friend texted him: “OMG CHECK YOUR TIKTOK.”

“I had a feeling this reaction could only be prompted from a duet from the Gordon Ramsay,” Merril said.

While Merril admits that his heart “dropped a little bit after hearing some of his scorns,” he was “just super happy” to be noticed by his hero.

“Initially, I took some of the critiques a little personally,” Merril said. “But I definitely understood how amazing it was to even have my cooking video noticed by one of my inspirations.”

“Many friends reached out congratulating me on ‘getting roasted,’ which was awesome,” he added. “It was definitely an amazing experience overall.”

And Merril picked up some new tips from Ramsay as well 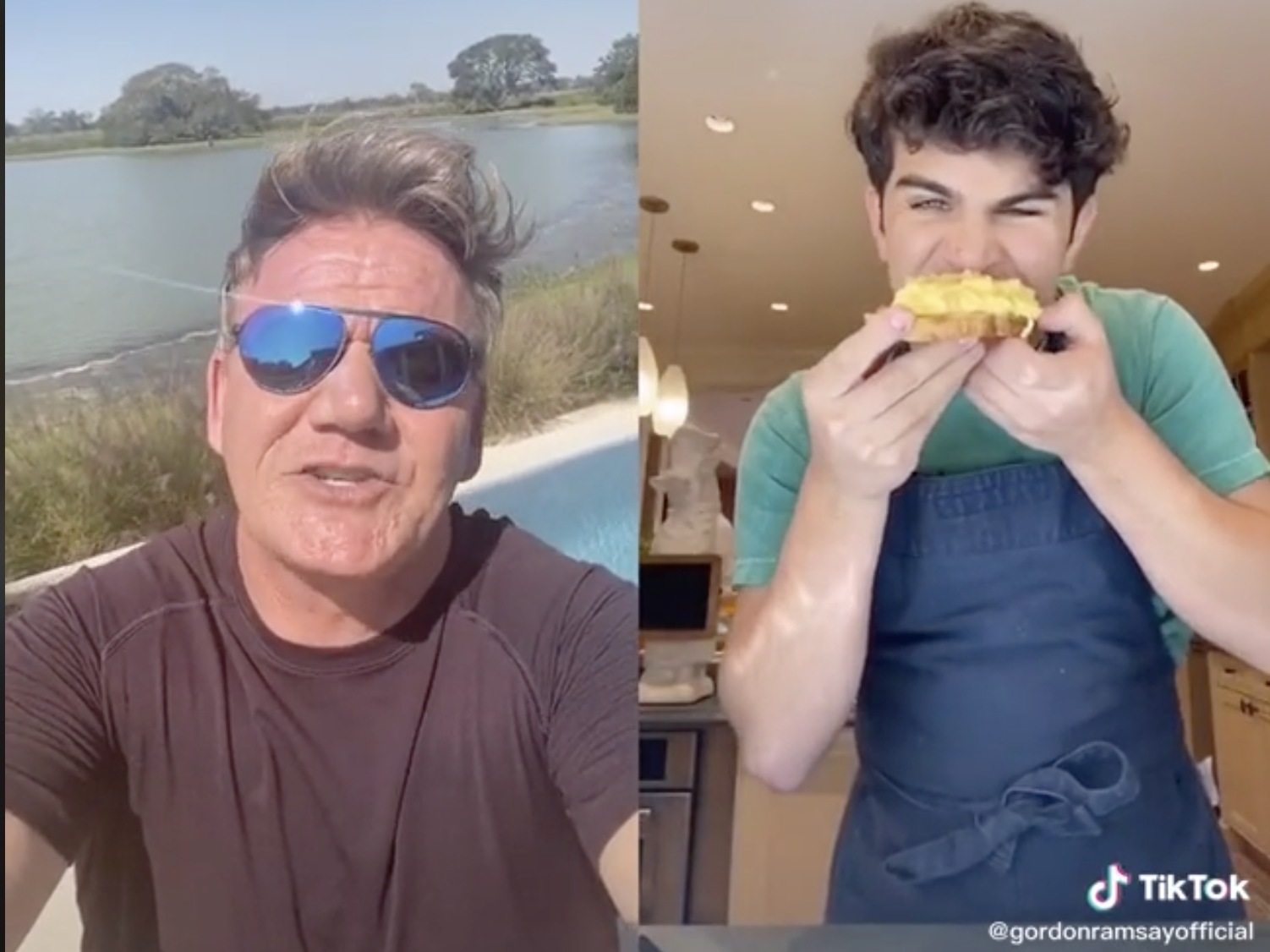 Ramsay inspired Merril to make the scrambled eggs again, which he filmed for a new TikTok video.

“Dear Chef Ramsay, this is my formal apology,” Merril wrote in the caption. “Thank you for roasting me. It was the highlight of my week.”

Merril said he was “grateful” that Ramsay specified how much a “knob” of butter was, and that his eggs came out “much creamier and airier” the second time around.

@matthewinthekitchenDear Chef Ramsay, this is my formal apology. Thank you forroasting me. It was the highlight of my week. ##gordonramsay##eggs##cooking

“I think using less butter was a great tip,” he told Insider. “Not overwhipping the eggs was definitely another tip that I found worked well.”

Merril said if he could tell Ramsay anything after being roasted by the “MasterChef” star, it would be to thank him for the advice.

“You have been an inspiration to me for many years,” he added. “And definitely inspired me to start cooking in the first place. I’m just honoured to have my work reviewed by the legend himself.”

Representatives for Gordon Ramsay did not immediately respond to Insider’s requests for comment.