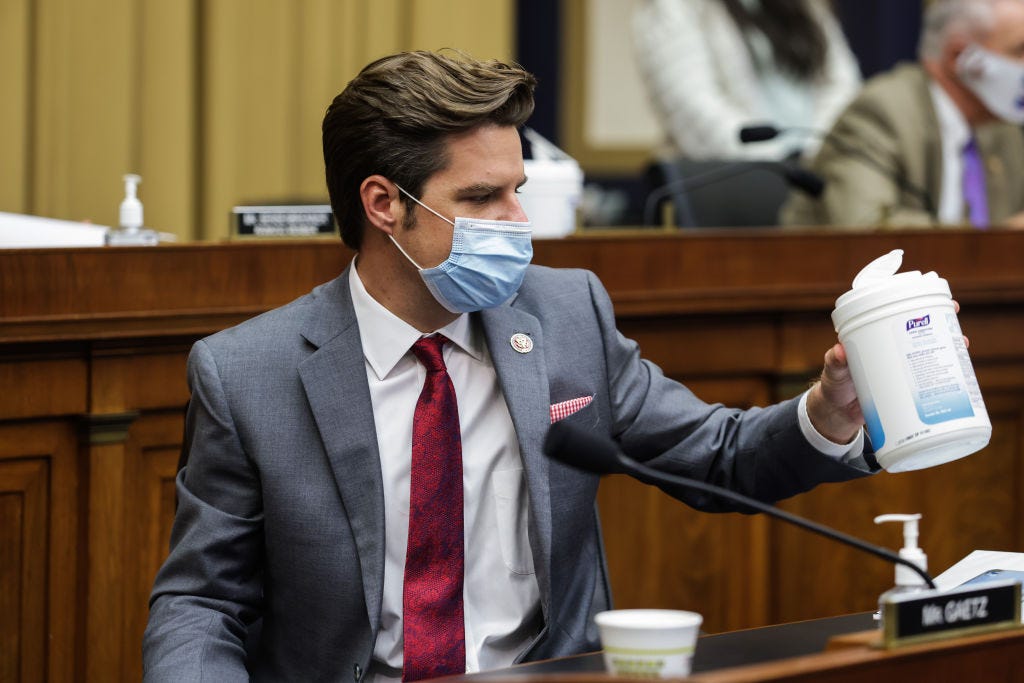 Graeme Jennings-Pool/Getty ImagesRep. Matt Gaetz (R-Fla.) with a container of sanitizer towels at the beginning of a House Judiciary Subcommittee hearing on July 29, 2020, on Capitol Hill.

Congressional Republican staffers said they’re being forced to come to work in person but their bosses are not taking the necessary precautions to protect them against coronavirus.

Several aides to Congress members and other Capitol workers revealed to Politico anonymously that they have been derided for wearing masks, not allowed adequate quarantine periods, provided no or very slow testing, and are in fear of retaliation if critical of work practices.

“I work in a Republican House office and while we’re not encouraged to not wear a mask, we are essentially required to work in the office,” one House Republican staffer told Politico. “We worked from home for a couple days when one of my coworkers was potentially exposed to Covid, but even then, many of my colleagues kept working in the office. We were told to report to work as normal even before the test came back negative because the results were taking too long. I was left feeling guilty for teleworking even though I have an underlying health condition.”

“Ridiculing people for wearing masks is also not uncommon,” an aide of a Republican congress member who previously had COVID-19 said to Politico. “I think you’d find a lot of offices in the anti-mask brigade are forcing staff to report to work even if they have legitimate concerns about their health. I’m sure you also [could] find some are having staff … travel to districts in high risk areas and then not providing for quarantine afterwards.”

One worker also pointed out a stark difference they observed between workplace measures implemented by Democrats versus Republicans.

“If you asked me to give you a breakdown of mask usage in member offices, it’s nearly universal in Democratic offices based on my random observations; within Republican offices, it’s probably under 50%,” a chief administrative tech staffer told Politico. “And some GOP offices ask why you are wearing a mask, which puts our staff in an awkward position – do you say because of the pandemic and risk the office taking that as a political stand? Do you take it off to make them feel better?”

“There is a general fear that saying anything critical of the current office policy – or lack of policy – will lead to retaliation,” an aide said to Politico.

The eyebrow-raising submissions come after Politico first reported that GOP Rep. Louie Gohmert tested positive for coronavirus on Wednesday, one day after he appeared on the Hill at Attorney General William Barr’s House Judiciary hearing.

An aide quickly disclosed afterward to Politico that Gohmert requires full staff to show up to his Capitol office so they “could be an example to America on how to open up safely” and that they were often berated for wearing face-coverings.

A “flood” of similar assertions were then relayed to Politico by other Republican staffers, according to reporter Jake Sherman.

All 535 Congress members have their own office and employ their own staff, meaning workplace rules and practices differ based on the individual one works for. There is no central human resources office for congressional staff.

Gohmert, who said he is asymptomatic and in isolation, later denied the claim by his employee.

The Republican representative from Texas was also called out by his colleagues for repeatedly refusing to wear a mask while at work. Lawmakers soon became increasingly alarmed at the potentiality of exposure to the disease, as many are of old age and would be at high risk of falling severely ill should they contract the virus, according to CDC guidance.

Some Congress members who Gohmert was in close proximity to on Capitol Hill have said they will self-quarantine after learning of his diagnosis. Barr, who was seen near Gohmert in a video shortly before the hearing, has tested negative for the virus.

The Capitol has been relatively lax with its coronavirus prevention policies since the pandemic began. Members of Congress and their staff are not routinely tested, unlike President Donald Trump and those working close to him.

On Thursday morning, House Speaker Nancy Pelosi officially made mask-wearing a requirement for everyone in all parts of the chamber, including Republican offices, and at all times except for when giving a speech or interview while socially distanced, when eating or drinking, alone in an office, or if they are unable to due to medical conditions.