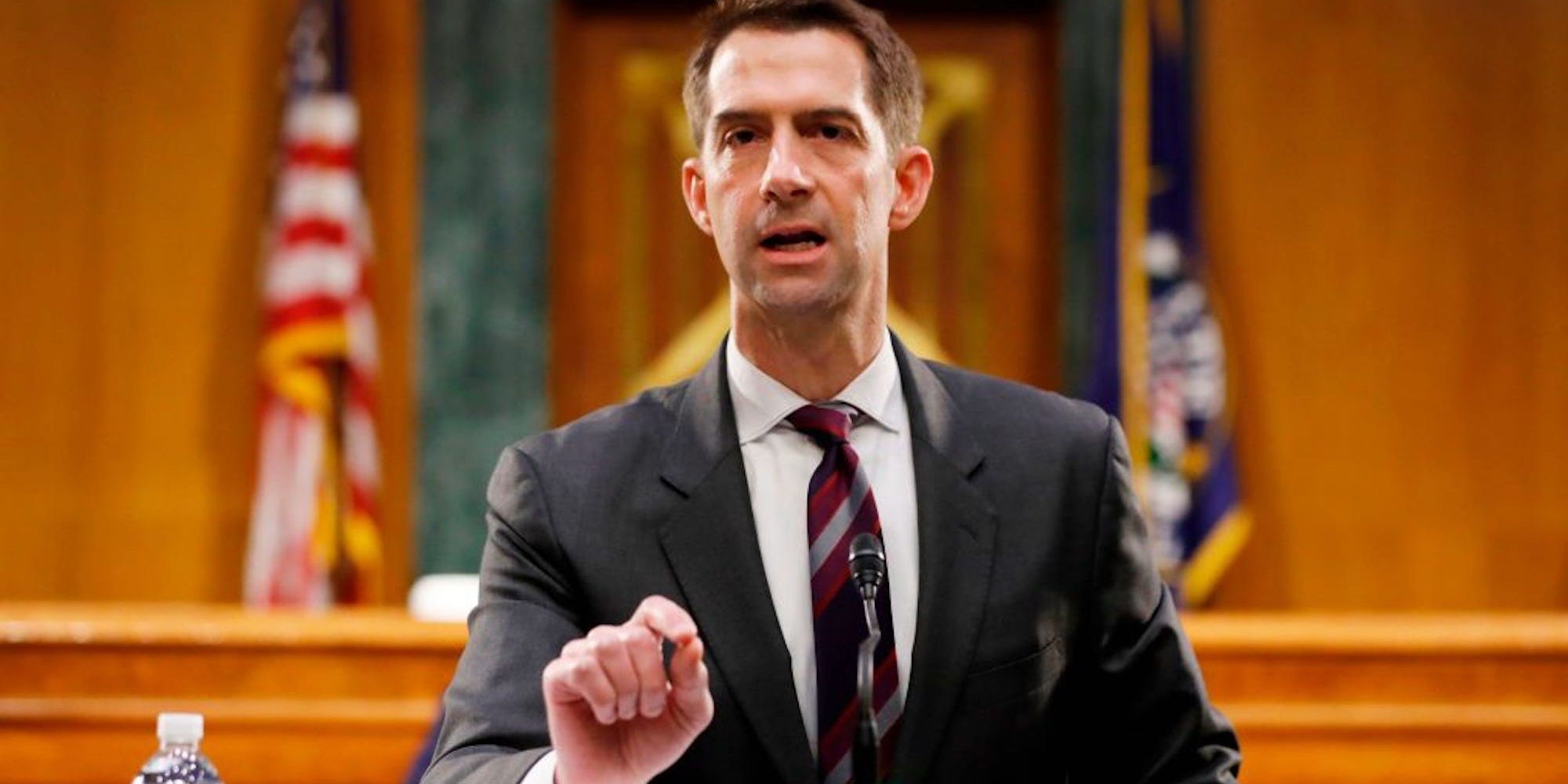 ANDREW HARNIK/POOL/AFP via Getty ImagesSen. Tom Cotton at a Senate Intelligence Committee hearing on May 5.

Republican Sen. Tom Cotton of Arkansas described slavery as a “necessary evil” in an attack on a New York Times project exploring the legacy of slavery in the US.

Cotton in an interview with the Arkansas Democrat-Gazette defended a bill he intends to introduce to Congress that would propose cutting federal funding to schools that adopt The Times’ “1619 Project” as part of their history curricula.

The project was launched in a special edition of The New York Times Magazine last August marking the 400th anniversary of the start of slavery in what became the US.

In an introduction, The Times said the project was meant to place “the consequences of slavery and the contributions of Black Americans at the very centre of our national narrative.”

Cotton disputed the premise of the project, which he said argued “that America is at root, a systemically racist country to the core and irredeemable.”

He went on to describe the US as “a great and noble country founded on the proposition that all mankind is created equal.” He continued: “We have always struggled to live up to that promise, but no country has ever done more to achieve it.”

Later, he said: “We have to study the history of slavery and its role and impact on the development of our country because otherwise we can’t understand our country. As the Founding Fathers said, it was the necessary evil upon which the union was built, but the union was built in a way, as Lincoln said, to put slavery on the course to its ultimate extinction.”

“The 1619 Project” has generated political controversy amid America’s struggle with its history of racism. Sen. Kamala Harris of California praised it as “a powerful and necessary reckoning of our history.”

But it’s attracted criticism from Republicans who claim it is ideologically driven. Newt Gingrich, the former House speaker who has been an ally of President Donald Trump, said in a 2019 tweet: “The NY Times 1619 Project should make its slogan ‘All the Propaganda we want to brainwash you with.'”

Nikole Hannah-Jones, the journalist who came up with the idea for the project and won a Pulitzer Prize for her introductory essay on it, hit back at Cotton’s characterizations in a tweet Sunday.

“If chattel slavery – heritable, generational, permanent, race-based slavery where it was legal to rape, torture, and sell human beings for profit – were a ‘necessary evil’ as @TomCottonAR says, it’s hard to imagine what cannot be justified if it is a means to an end,” she wrote.

Some historians have questioned whether any of the Founding Fathers described slavery as a “necessary evil.”

While I don’t doubt that SOMEONE called slavery a necessary evil, at some point in time, is there an actual source recording a “founding father” dubbing chattel slavery a “necessary evil” in a meaningful context?

Cotton subsequently said he had been describing “the views of the Founders,” rather than citing them as part of his own argument.

But Hannah-Jones challenged him to repudiate the view he ascribed to the founders, that slavery was a “necessary evil.”

“Were the Founders right or wrong, @TomCottonAR, when they called slavery a ‘necessary evil upon which the Union was built’?” she asked. “Because either you agree with their assessment of slavery as necessary or you admit they were lying and it was just an evil and dishonorable choice. Which?”

Cotton has yet to respond.