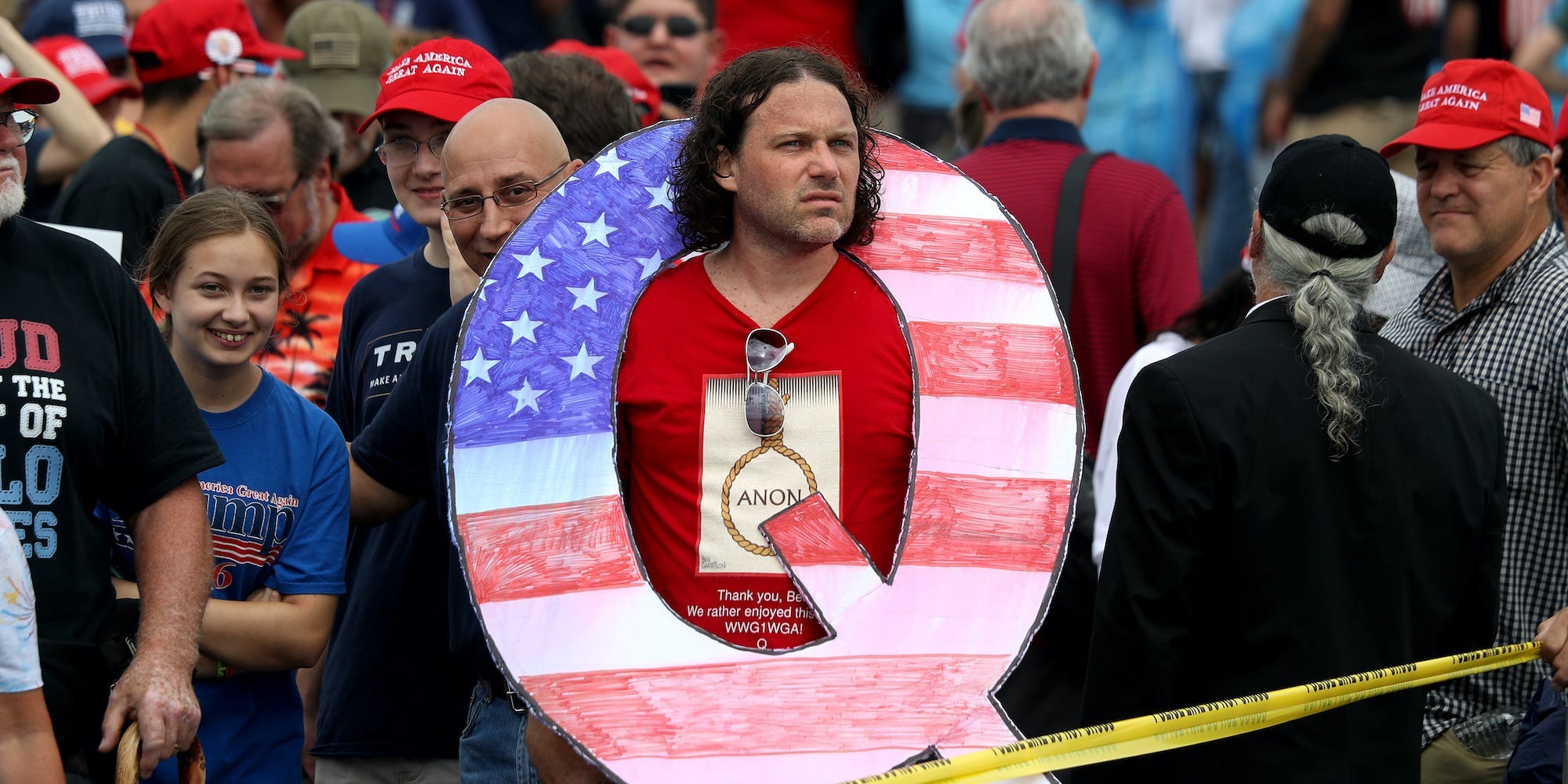 Rick Loomis/Getty ImagesDavid Reinert holds a large ‘Q’ sign while waiting in line on to see President Donald J. Trump at his rally August 2, 2018 at the Mohegan Sun Arena at Casey Plaza in Wilkes Barre, Pennsylvania.

The Republican party is accusing Democratic candidates and politicians across the country of protecting sex criminals and child abusers.

In one series of attacks, the National Republican Congressional Campaign Committee labelled Michigan congressional candidate Jon Hoadley, who is gay, a “pedo sex poet” who writes “pedophile erotica,” clearly twisting a comment Hoadley made in a 2004 satirical blog post. Blogging about whether all “gay men desire to be flower girls,” Hoadley quoted a friend joking that he didn’t want to see a “four-year-old wearing a thong.” Hoadley apologised for the blog posts.

An attack ad created by the NRCC targets Democratic Rep. Tom Malinowski in New Jersey, falsely claiming the freshman congressman “tried to make it easier for predators to hide in the shadows” as the “top lobbyist for a radical group that opposed the National Sex Offender Registry.”

.@dccc defending pedophilia is so on-brand for them this cycle. They support a man writing pedophile erotica in #MI06, a man who lobbied on behalf of sex offenders in #NJ07 and now this in #CA25 https://t.co/bauRZIkNd2

Before running for Congress and flipping a House seat from red to blue, Malinowski served as the longtime Washington director of Human Rights Watch, a well-respected non-profit that advocates against torture, genocide, and other forms of oppression around the world. He also served as President Barack Obama’s assistant secretary of state for democracy, human rights, and labour.

Under Malinowski, Human Rights Watch lobbied against the 2006 Omnibus Crime Bill, which included a host of measures the group and many civil rights advocates opposed, including the expansion of the federal death penalty, lifetime registration for sex offenders, charging juveniles in adult courts, and enhanced mandatory minimum sentences.

“Registration requirements put these individuals at risk of retaliation and discrimination and make it extremely difficult for these individuals to find employment, housing, and to rebuild their lives,” HRW wrote of the expanded sex crimes registry.

The GOP has reportedly spent over $US250,000 on the fear-mongering ad.

As the Republican party officially sensationalizes baseless claims that Democrats are protectors of child abusers and sex traffickers, QAnon conspiracy theorists are aggressively spreading similar claims about Democrats. QAnon centres around the false theory that Trump is battling a secret cabal of Satanists and pedophiles, including prominent Democrats, who are determined to oust him.

Followers of “Q,” an anonymous person or people who post on fringe online message boards, believe Democrats sacrifice children and drink their blood to extend their own lives.

The NRCC didn’t immediately respond to Business Insider’s request for comment. But Michael McAdams, a spokesman for the organisation, recently told Yahoo News it is “truly pathetic” to “excuse” Democrats’ alleged “decisions to lobby on behalf of sex offenders, blog about ‘4-year-old-girls in thongs’ and vote against legislation protecting children from sex offenders because of an online conspiracy theory.”

BRENDAN SMIALOWSKI/AFP via Getty ImagesPresident Donald Trump speaks at the first day of the Republican National Convention on August 24, 2020, in Charlotte, North Carolina.

Trump and his party are flirting with QAnon

Experts in QAnon and far-right messaging say Republicans behind the efforts to paint Democrats as protectors of sex offenders are intentionally fanning the flames of a dangerous conspiracy for political benefit.

“They know what they’re doing. They’re tapping into that larger cauldron of sentiment out there that the QAnon community has largely been able to brew,” Angelo Carusone, president of Media Matters for America, a progressive group that chronicles right wing media, told Business Insider.

When asked about QAnon in August, Trump embraced the movement’s supporters, calling them “people that love our country.” Over the last few years, the president has shared over 200 messages on his Twitter account from QAnon supporters or with QAnon hashtags and other messaging.

Trump Jr. later said he was “joking around,” but still insisted that Biden should “stop the unwanted touching & keep his hands to himself.” The original post has nearly 182,000 likes.

Earlier this month, the president took up his son’s messaging and retweeted an image accusing Biden of being a pedophile.

Carusone said there’s an increasingly widespread belief on the right that there’s a “mass crisis of pedophilia” in the US and that it’s “largely a Democratic or liberal problem.”

“I think people have largely underestimated how big and how deeply the larger narratives of QAnon have seeped into the rightwing zeitgeist,” he said. “We have seen a massive surge in claims about pedophilia, and also maybe maligning democrats and liberals more broadly, as somehow being pro-pedophilia.”

Right-wing, pro-Trump conspiracists have long made baseless claims that Democrats are child abusers. QAnon grew out of those dangerous theories.

In 2016, right-wing conspiracists spread the infamous “Pizzagate” conspiracy, which falsely held that Hillary Clinton and other Democrats were running a sex-trafficking ring out of the basement of Washington pizza restaurant.

In December 2016, Edgar Maddison Welch, drove from his home in North Carolina to the Comet Ping Pong restaurant in Washington and fired his assault rifle inside the restaurant, where he believed abused children were being held. No one was hurt.

Welch, who conceded that he’d made “incredibly ill-advised decision,” was sentenced to four years in federal prison.

Kayla Epstein contributed to this report.