The GOP thinks one line from Trump's Jan. 6 speech will excuse the rest of it and everything else he did to incite the Capitol siege 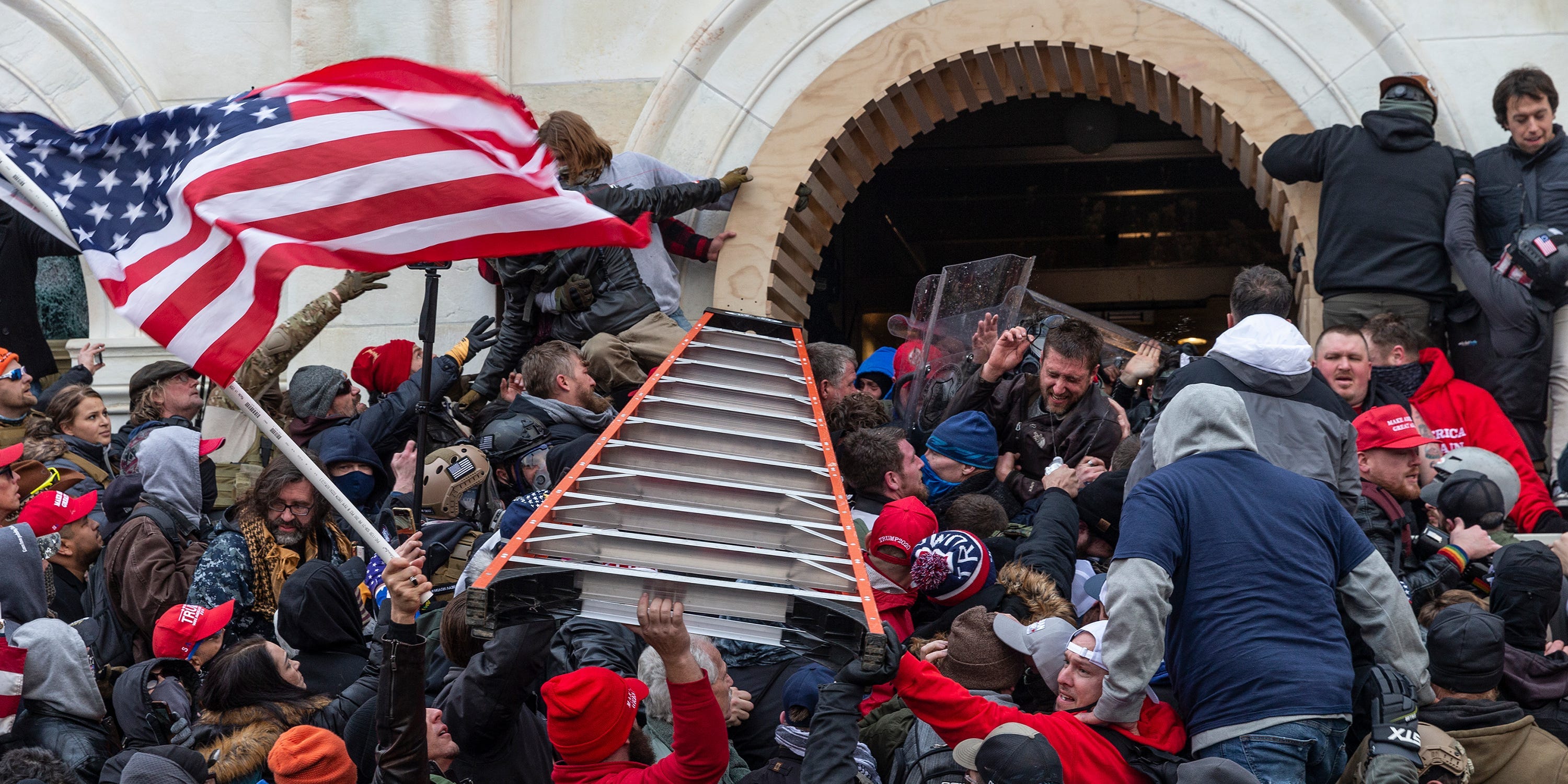 As House Republicans laid out their unsuccessful case against impeaching President Donald Trump on Wednesday, a number of GOP lawmakers pointed to one line from the president’s incendiary and dishonest January 6 speech as evidence he did not provoke the Capitol siege.

Meanwhile, these same lawmakers ignored the rest of the speech and the inflammatory rhetoric Trump used, like telling his supporters “if you don’t fight like hell, you’re not going to have a country anymore.” They failed to mention how Trump’s repetitive lies about the election over the course of 2020 and into the new year helped set the stage for the anger and violence that was on display at the US Capitol last Wednesday.

During the speech, which was delivered outside of the White House, Trump said: “I know that everyone here will soon be marching over to the Capitol building to peacefully and patriotically make your voices heard.”

House Republicans on Wednesday repeatedly pointed to this line in defence of Trump, emphasising that the president used the word “peacefully.”

“If we impeached every politician who gave a fiery speech to a crowd of partisans, this Capitol would be deserted. That’s what the president did. That’s all he did. He specifically told the crowd to protest peacefully,” GOP Rep. Tom McClintock of California said during the debate over impeachment.

But McClintock and other Republicans who cherrypicked the same line, including Rep. Jim Jordan of Ohio, did not mention the fact Trump during the speech also told his supporters to “fight like hell” to take back their country near the close of his long speech.

They ignored how the rest of Trump’s speech was an incitement to riot, and cancelled out the brief moment the president called for peaceful demonstrations.

“You’ll never take back our country with weakness. You have to show strength and you have to be strong,” Trump said during his speech. “We fight like hell, and if you don’t fight like hell you’re not going to have a country anymore.”

Throughout the speech, Trump peppered his supporters with false claims about the election â€” including that he “won it by a landslide.”

“You will have an illegitimate president,” Trump falsely said of President-elect Joe Biden. “That is what you will have, and we can’t let that happen.”

The president explicitly urged his supports to march on the US Capitol, at one point suggesting he’d walk there with them as Congress went through the formal step of accepting the election results certified by the states. Trump ended up retreating to the White House to tweet as his supporters engaged in an attempted coup.

The speech riled up Trump’s supporters, who subsequently swarmed the Capitol. They destroyed property and clashed with police. Five people were killed, including a police officer. The riot delayed, but ultimately failed to prevent, the certification of Biden’s Electoral College victory.

It was a violent insurrection in the heart of America’s democracy and against its democratic processes provoked by the president. Trump told his supporters to “fight,” and they listened.

New footage shows what it was like inside the Trump mob at the Capitol pic.twitter.com/GFvMBZ7YYA

Even House Minority Leader Kevin McCarthy, the top Republican in the lower chamber and a staunch ally of the president, could not deny that Trump was complicit in the mayhem. “The president bears responsibility for Wednesday’s attack by mob rioters,” McCarthy said before the House on Wednesday during the impeachment debate.

But most House Republicans would not join McCarthy in acknowledging Trump’s culpability.

‘Big protest in D.C. on January 6th. Be there, will be wild’

McClintock and other Republicans who pointed to the single, isolated moment in Trump’s speech that he endorsed peaceful protest also ignored the ways in which the president did virtually nothing to stop the chaos as it was ongoing.

In fact, as his supporters were storming the Capitol, Trump took to Twitter to attack Vice President Mike Pence for not having the “courage” to overturn the election. The vice president did not have the power to unilaterally do this, but Trump scapegoated him and painted a target on Pence’s back. Trump’s supporters could be heard chanting “hang Mike Pence” amid the riot.

When Trump finally urged his supporters to leave in a video posted to Twitter hours later, he continued to fan the flames by falsely stating that the election had been “stolen” from him. This was also left out of GOP defences of Trump on Wednesday, as were the myriad other ways the president laid the groundwork for the lethal pandemonium in Washington on January 6.

Trump advertised a “wild” protest for the date, calling on his supporters to swarm the Capitol as lawmakers were set to meet for the final and constitutionally-mandated step in certifying Biden’s victory.

“Statistically impossible to have lost the 2020 Election. Big protest in D.C. on January 6th. Be there, will be wild!” Trump said in a tweet on December 19.

During the months that led up to Election Day, Trump habitually spread false info on mail-in voting, baselessly suggesting that increased access to it amid the COVID-19 pandemic would lead to widespread fraud.

After Election Day and when it became clear that he lost, Trump repeatedly and baselessly claimed that he lost the election due to mass voter fraud.

Trump in a tweet on December 26 called the 2020 election “the biggest SCAM in our nation’s history,” adding, “History will remember. Never give up. See everyone in D.C. on January 6th.”

Polling showed that an overwhelming majority of Trump supporters were convinced by such lies.

Trump and his GOP allies won zero out of dozens of lawsuits related to the election, and the president’s own Justice Department conducted an investigation that found no election-altering fraud. But the president to this day has refused to concede.

After the riot, Trump finally acknowledged there would be a new administration for the first time, but did not explicitly admit he was defeated. He has not congratulated Biden, and is set to become the first outgoing president since 1869 to skip their successor’s inauguration. As Republicans call for unity as DC braces for more violence on Election Day, the president has still not publicly recognised that he lost in a free and fair election.

Trump on Wednesday became the only president in US history to be impeached twice, with Republicans grasping at straws as they sought to prop up an anti-democratic president they have enabled for four years.