GOOGLE: Here Are All The New Smartphones And Tablets We Would Have Launched Today If New York Hadn't Been Closed A blog post from Google’s mobile chief Andy Rubin reveals what the company had on tap for its launch event in New York today.

The good news is … despite the weather, the new gadgets are now available.

Nexus: The best of Google, now in three sizes
by Andy Rubin.

People increasingly have more than one device, and they switch between them many times a day. Nexus—Google’s hardware line for Android devices—gets rid of the hassle. Just sign in with your Google Account and everything is there ready to go, whatever device you’re using: photos, emails, contacts, bookmarks, even your entertainment on Google Play.

Today, we’re excited to announce three great new Nexus devices … in small, medium and large. And they all run Android 4.2, a new flavour of Jelly Bean—which includes the latest version of Google Now and other great new features. 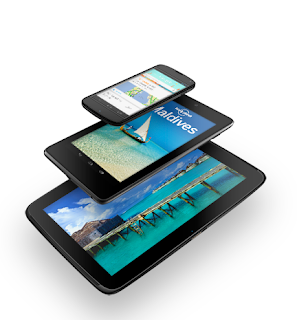 Nexus 4 with Google Now and Photo Sphere
Nexus 4 is our latest smartphone, developed together with LG. It has a quad-core processor which means it’s super fast, a crisp 4.7″ (320 ppi) display that’s perfect for looking at photos and watching YouTube, and with wireless charging you just set the phone down on a charging surface to power it up, no wires needed. While Nexus 4 is incredibly powerful under the hood, it also features the latest version of Jelly Bean, Android 4.2—the simplest and smartest version of Android yet. Starting with the camera, we’ve reinvented the photo experience with Photo Sphere, which lets you capture images that are literally larger than life. Snap shots up, down and in every direction to create stunning 360-degree immersive experiences that you can share on Google+ with friends and family—or you can add your Photo Sphere to Google Maps for the world to see.

Android 4.2 brings other great goodies like Gesture Typing, which lets you glide your finger over the letters you want to type on the keyboard—it makes typing fast, fun and a whole lot simpler. Android 4.2 also adds support for Miracast wireless displays so you can watch movies, YouTube videos, and play games right on your HDTV wirelessly.

Google Now—even more useful
We designed Google Now to make life simpler by giving you the right information at just the right time in easy to read cards, before you even ask. And the feedback has been awesome. So today we’re adding more cards that we hope you’ll find useful. Flight information, restaurant reservations, hotel confirmations and shipping details—how often have you found yourself wading through your email to get this information at the last moment? So next time you book a table for dinner, you’ll get a reminder with all the details without ever having to lift a finger. You’ll also get cards for nearby attractions, interesting photo spots, movies times at nearby theatres or concerts by your favourite artists.

Nexus 7: Thin, light and now even more portable
Nexus 7 brings you the best of Google–YouTube, Chrome, Gmail, Maps–and all the great content from Google Play in a slim, portable package that fits perfectly in your hand. To give you more room for all that great content you can now get Nexus 7 with 16GB ($199) or 32GB ($249) of storage. But we also wanted to make this highly portable tablet even more mobile. So we added HSPA+ mobile data. Nexus 7 is now also available with 32GB and HSPA+ mobile ($299), which can operate on more than 200 GSM providers worldwide, including AT&T in the US.

Nexus 10: Powerful and shareable
Nexus 10 is the ultimate tablet for watching movies or reading magazines. We wanted to build a premium entertainment device, so we partnered with Samsung to do just that. Nexus 10 is the highest resolution tablet on the planet at 2560-by-1600 (300ppi), that’s over 4 million pixels right in your hands. It comes with a powerful battery that will get you up to nine hours of video playback and more than 500 hours of standby time. With a set of front-facing stereo speakers, you can watch movies right from your Nexus 10 and they simply sound awesome. But what makes Nexus 10 unique is that it’s the first truly shareable tablet. With Android 4.2, you can add multiple users and switch between them instantly right from the lockscreen. We believe that everyone should have quick and easy access to their own stuff — email, apps, bookmarks, and more. That way, everyone can have their own home screens, their own music, and even their own high scores.

Google Play: More entertainment, more countries
We’ve recently added a ton of great new entertainment to Google Play, such as movies and TV shows from Twentieth Century Fox. Earlier this year we expanded our service beyond movie rentals and now you can purchase movies and build a library of your favourites in Google Play. Today we’re bringing movie purchasing to more countries – Canada, the U.K., France, Spain and Australia.
We’re also excited to announce two new partnerships. We’re now working with Time, Inc. to bring you even more magazines like InStyle, PEOPLE, TIME and others. And we’ve partnered with Warner Music Group who will be adding their full music catalogue with new songs coming each day. We’re now working with all of the major record labels globally, and all the major U.S. magazine publishers, as well as many independent labels, artists and publishers.

On November 13, we’re bringing music on Google Play to Europe.  Those of you in the U.K, France, Germany, Italy and Spain will be able to purchase music from the Google Play store and add up to 20,000 songs—for free—from your existing collection to the cloud for streaming to your Android devices or web browser. We’re also launching our new matching feature to streamline the process of uploading your personal music to Google Play. We’ll scan your music collection and any song we match against the Google Play catalogue will be automatically added to your online library without needing to upload it, saving you time. This will be available in Europe at launch on November 13 and is coming to the U.S. soon after. This will all be for free—free storage of your music, free matching, free syncing across your devices and free listening.

Great value
We’ve always focused on building great devices at great value.  And we think today’s devices offer the very best that money can buy. Here are more details on when and where you can pick up your next Nexus device:

A Nexus device is much more than simply a phone or tablet. It’s your connection to the best of Google—all of your stuff and entertainment, everywhere you go with no hassle.  Now you have three new Nexus devices, a new improved version of Jelly Bean and more entertainment than ever before—all available in Google Play. The playground is open.