I made 5 popular breakfasts in the air fryer, and I may never use my stovetop again 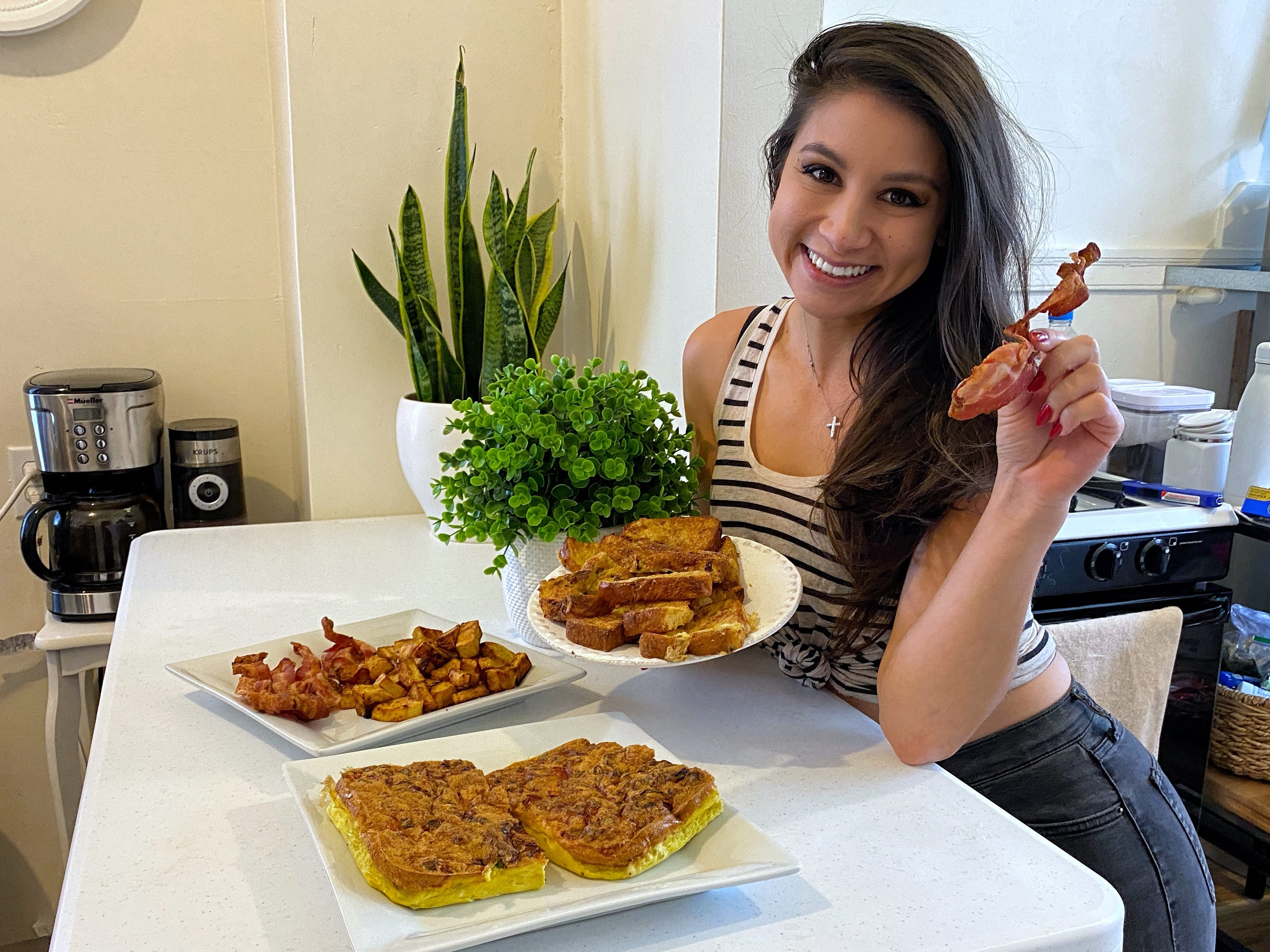 Chelsea Davis for InsiderI made five iconic breakfasts in the air fryer.

The air-fryer hype is real, and this appliance makes everything more convenient, from the actual cooking to the cleanup.

In the hopes of making my mornings easier, I tried cooking five classic breakfast recipes in the air fryer and rated each dish on the criteria of difficulty level, flavor, and whether I’d make it again.

Read on to find out how each recipe turned out, and which ones I plan to cook again.

Before anything else, I made bacon 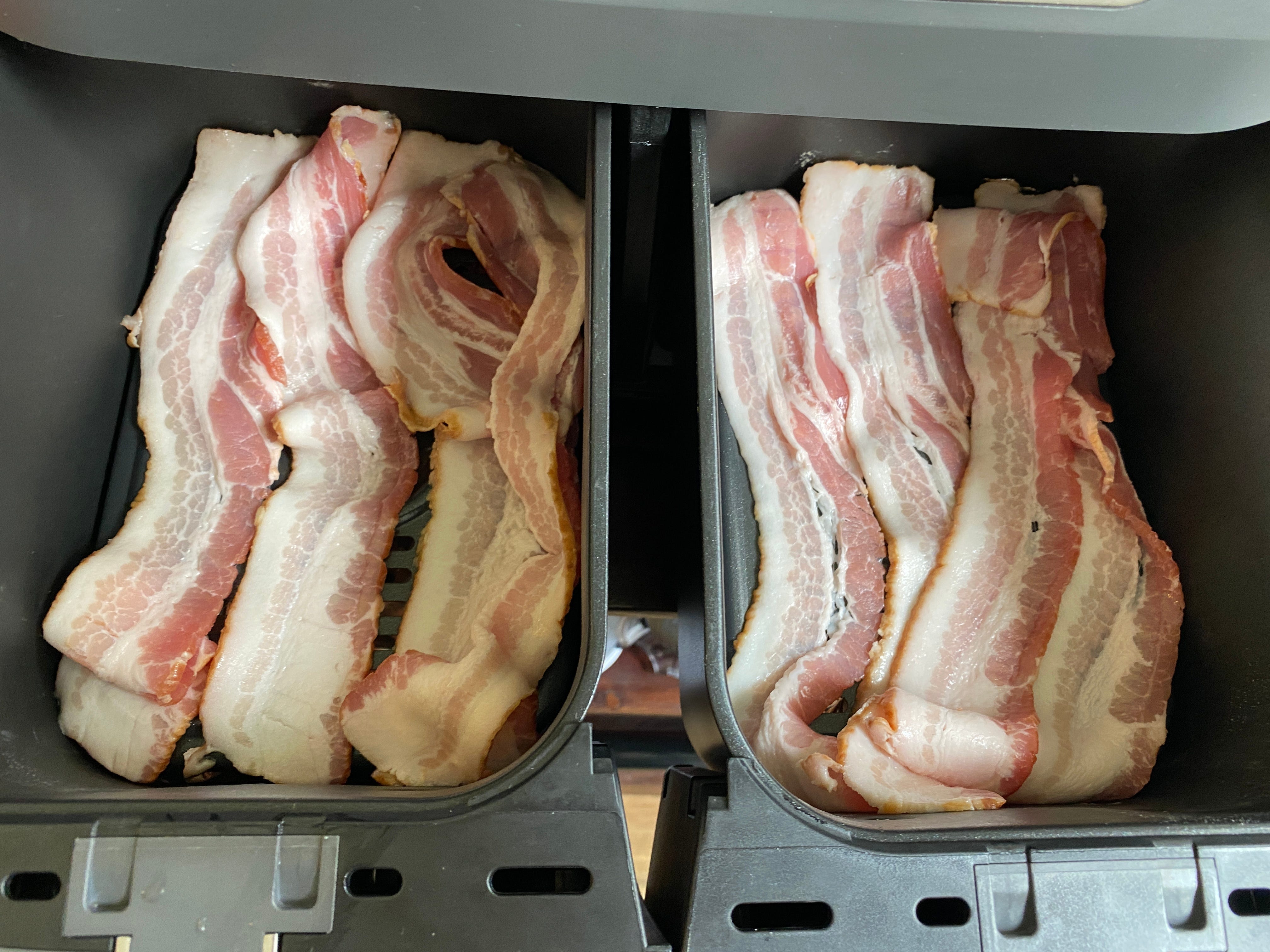 Chelsea Davis for InsiderI laid the bacon out on the air-fryer racks.

This method for cooking bacon is so much easier than any other I’ve tried, and I can’t believe I had never thought of it.

I placed a sheet of tinfoil under the appliance’s grate to catch the grease for easy cleanup, laid out a single layer of bacon in both baskets, and air-fried the meat for 11 minutes at 400 degrees Fahrenheit, shaking it all about halfway through.

The bacon came out perfectly 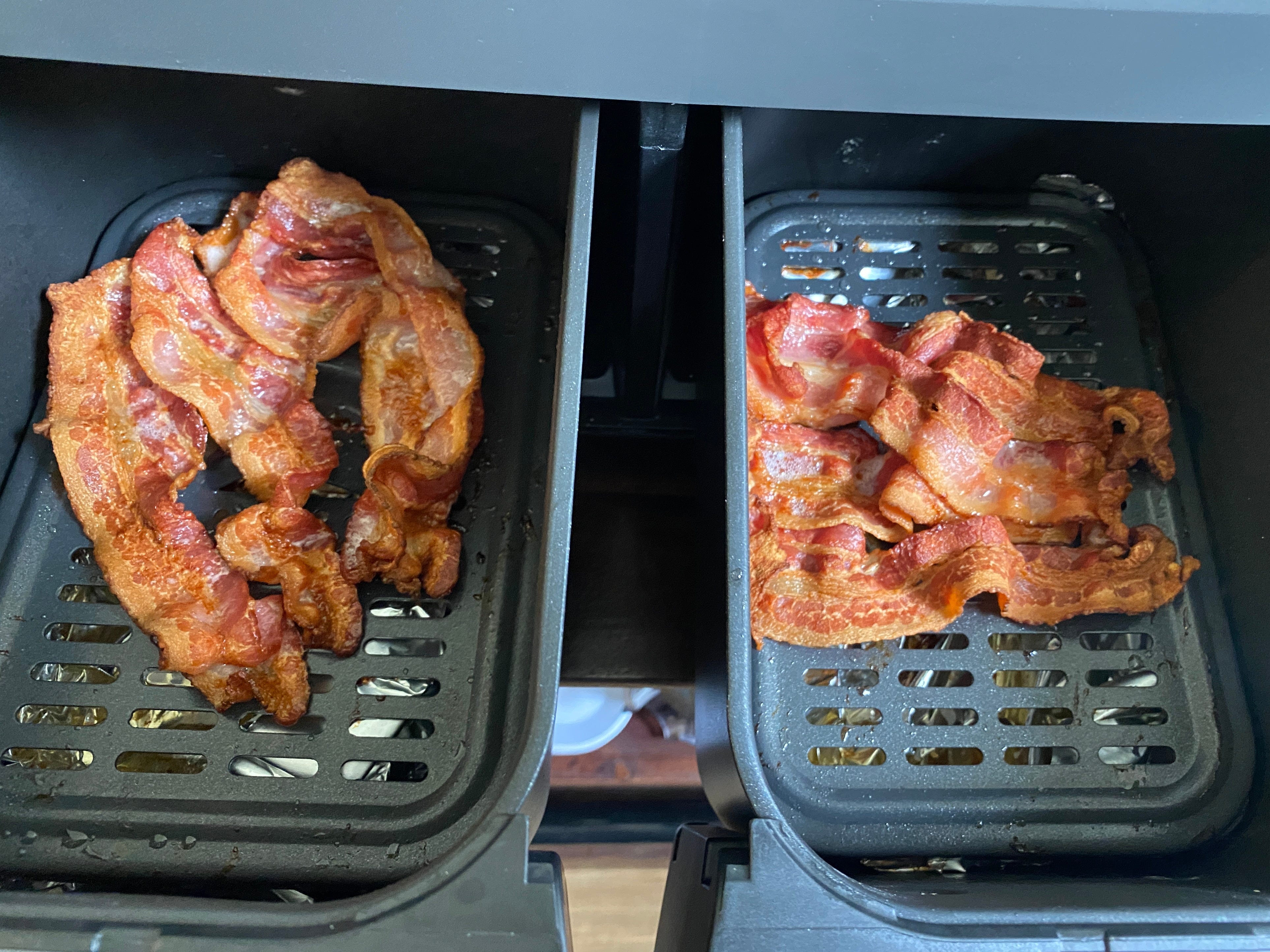 Chelsea Davis for InsiderThe bacon came out so crispy.

A breeze to make, this breakfast side had the perfect consistency, and I will never make bacon any other way again. 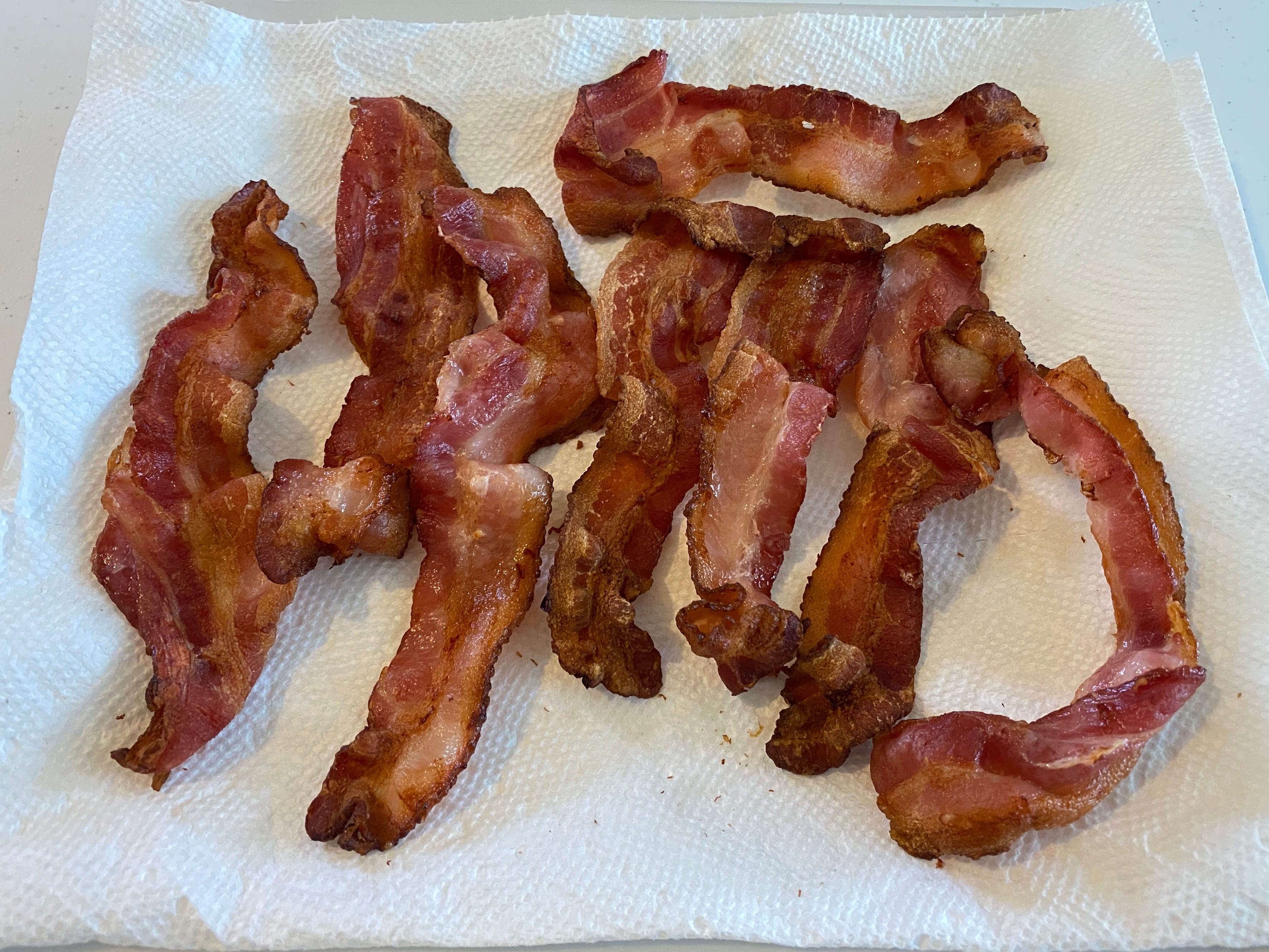 Chelsea Davis for InsiderThe easy cleanup made this recipe even better.

Depending on how crispy you want your bacon, you could easily adjust the cooking time.

And best of all, there was no grease splattering or residual smokiness, and the cleanup was as easy as removing the grease-filled tinfoil liner.

Would I make it again: Absolutely.

I made breakfast potatoes next 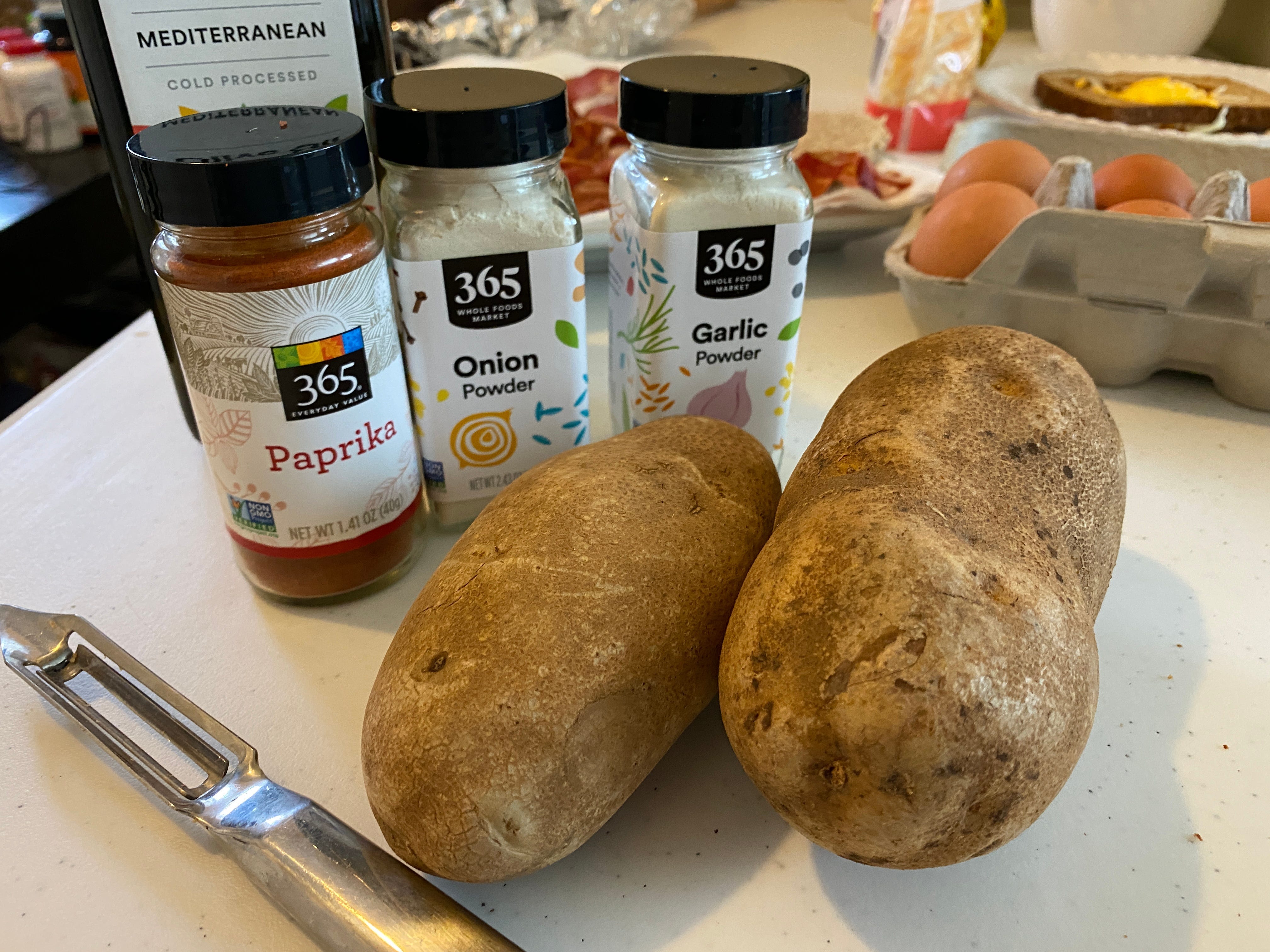 Chelsea Davis for InsiderThis recipe didn’t call for many ingredients.

This method of making breakfast potatoes was tasty and simple. 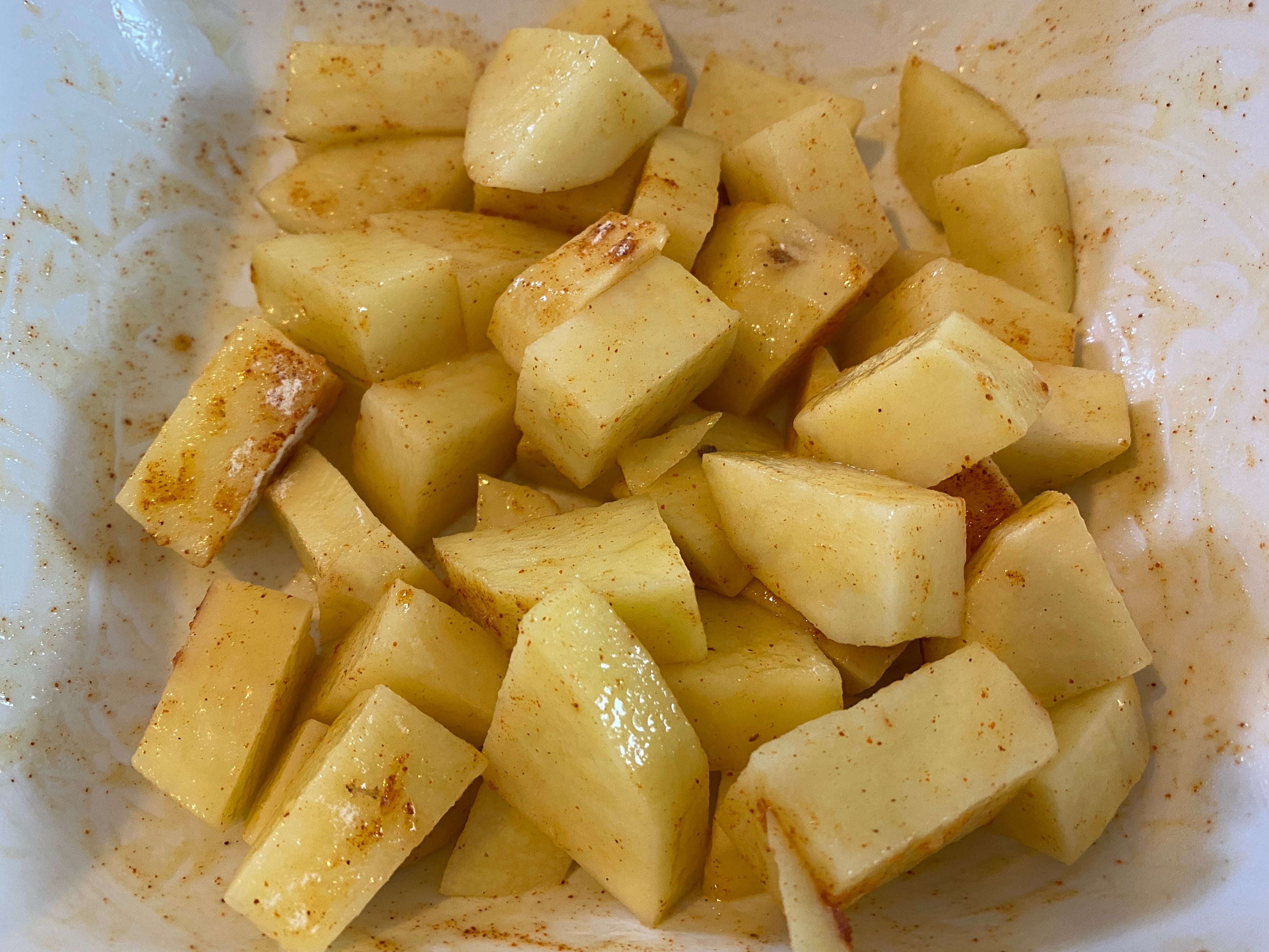 Chelsea Davis for InsiderThis meal was easy to toss together.

All I did was peel and chop a russet potato, coat it in olive oil, and sprinkle it with paprika, onion and garlic powder, and salt.

After evenly combining the mix, I put the cubes in the air fryer at 400 degrees Fahrenheit for 20 minutes, shaking halfway through.

These home fries came out a little overcooked 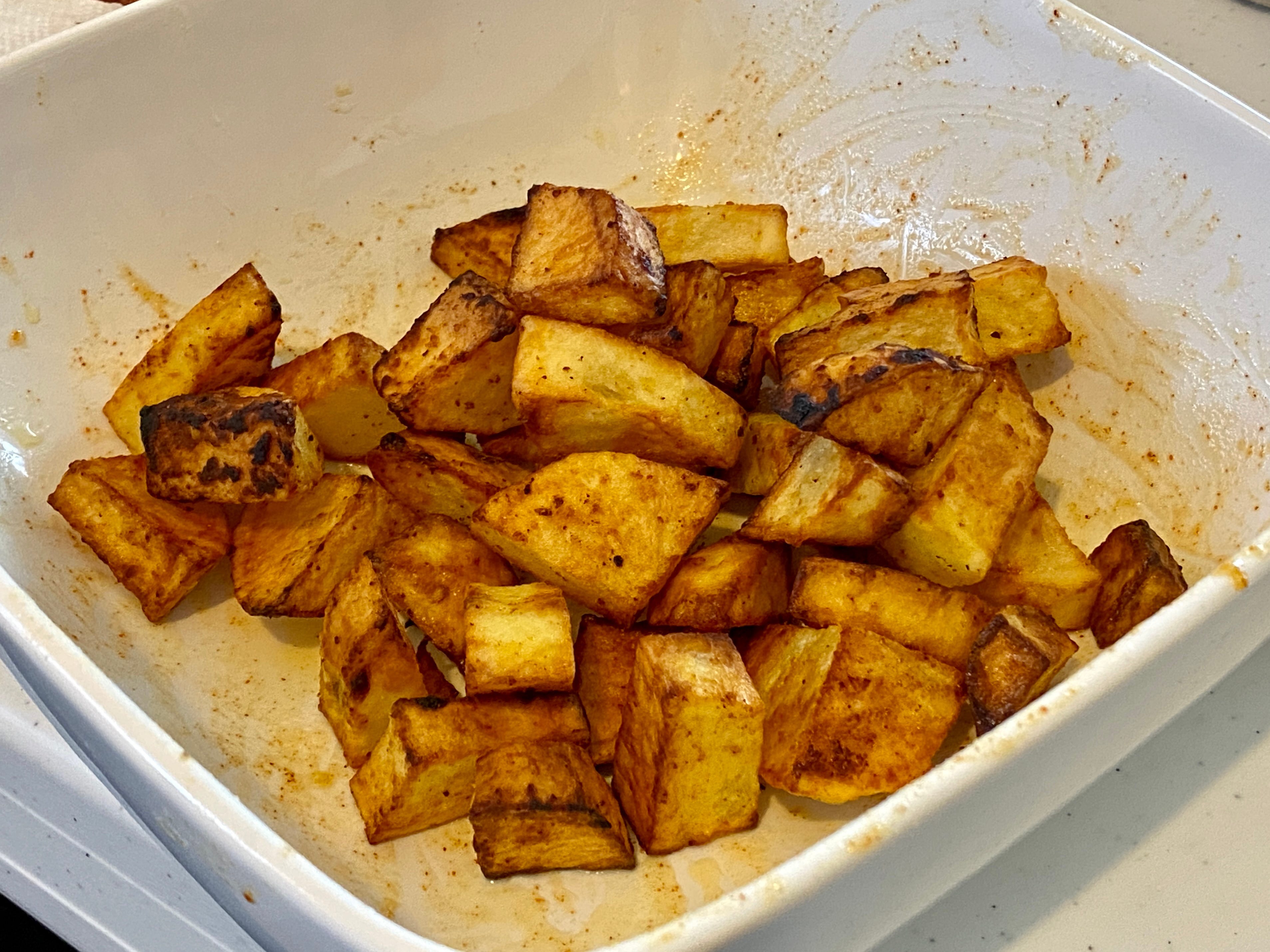 Chelsea Davis for InsiderThis dish could use some extra flavor.

Since I only chopped one potato, the dish cooked quicker than the 20 minutes the recipe calls for.

And although the cubes were a bit overcooked and burnt on some parts, their flavor was delicious, and most of the pieces were a nice mix of crispy and crunchy.

Plus this method was still way easier than making home fries in a skillet, and I may add some diced bell peppers and onion for extra flavor next time.

Would I make it again: Yes, but I’d add a few ingredients and cook it for less time.

I whipped up eggs in a basket for my 3rd recipe

I’ve never been a huge fan of eggs in a basket – also known as egg in a hole – because it seems like an unnecessary combo, and I prefer a full-sized toast with my breakfast spread.

That said, this go at it was much easier than the times I’ve made it in a pan. 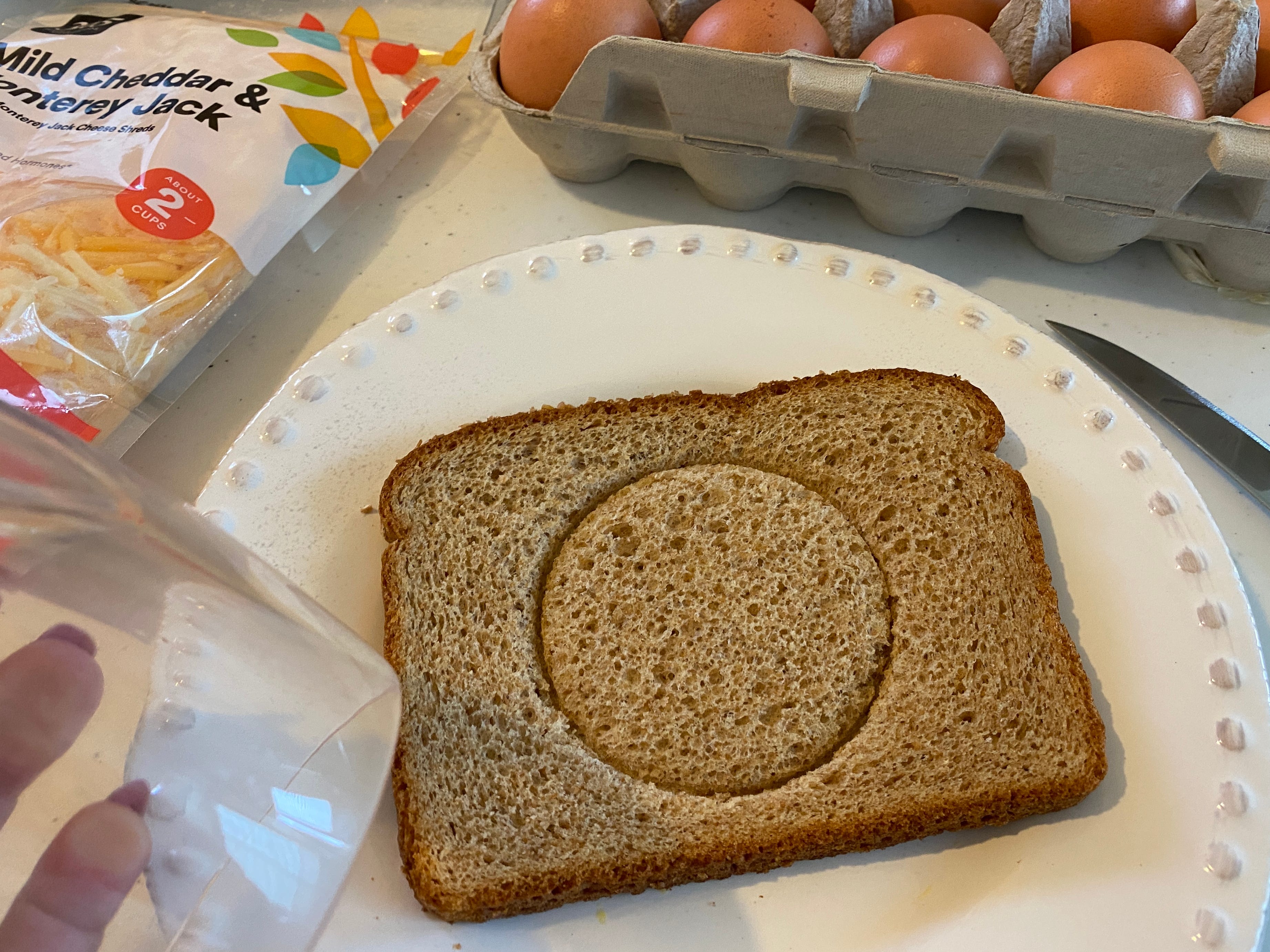 Chelsea Davis for InsiderI’m usually not a huge fan of egg in a hole.

I first used a cup to make a hole in the bread, then sprayed the interior of the appliance with cooking spray.

Once I got my bread in the air fryer, I cracked an egg inside the hole and cooked it at 330 degrees Fahrenheit, flipping it after a few minutes to let the other side bake and adding some cheese on top. 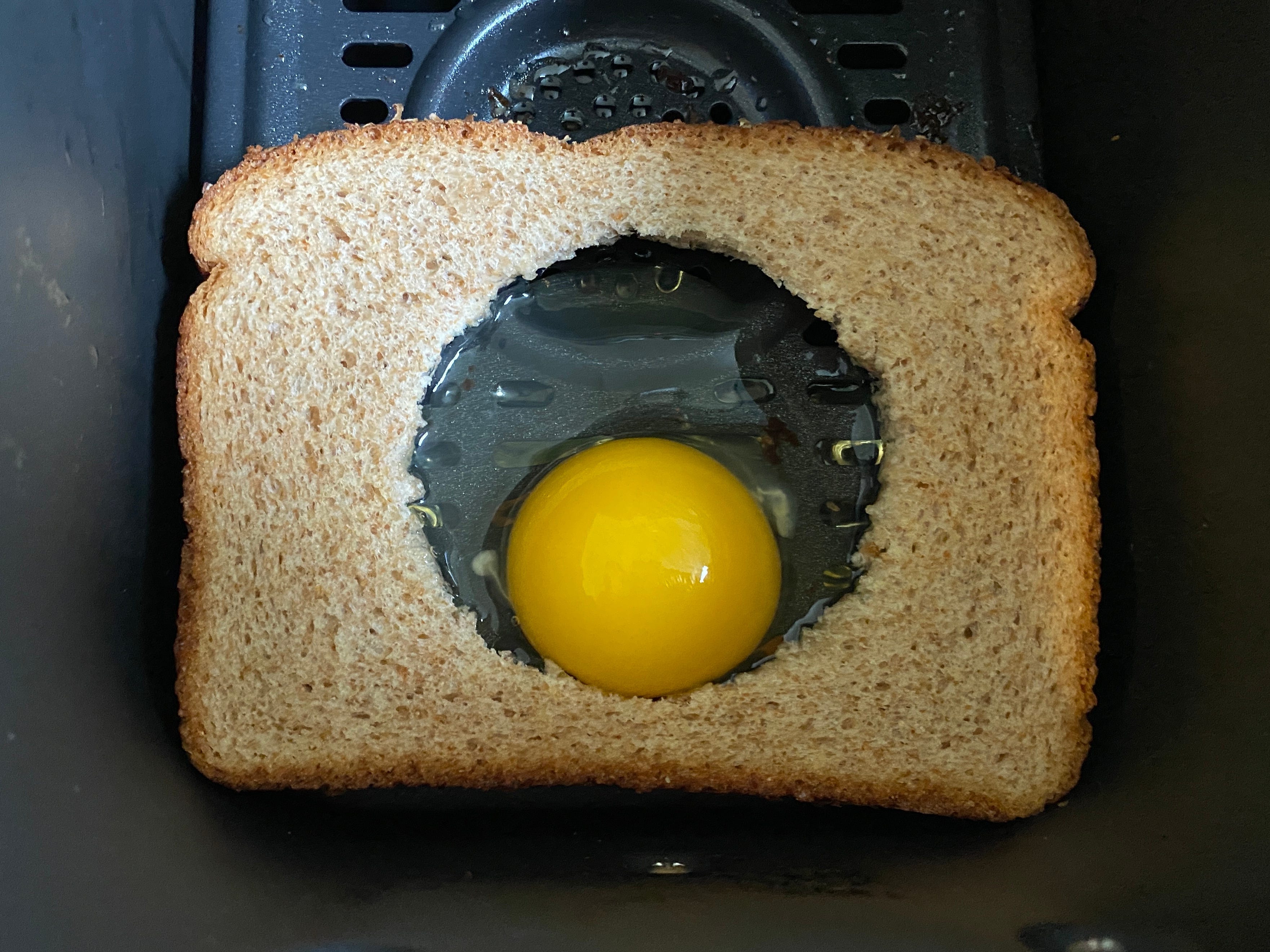 Chelsea Davis for InsiderI was worried the egg would make a mess in my air fryer.

I thought the egg would seep through the holes in the grate and ruin the meal, but surprisingly, it all held together well.

The egg wasn’t quite runny enough for my liking, but I still enjoyed it 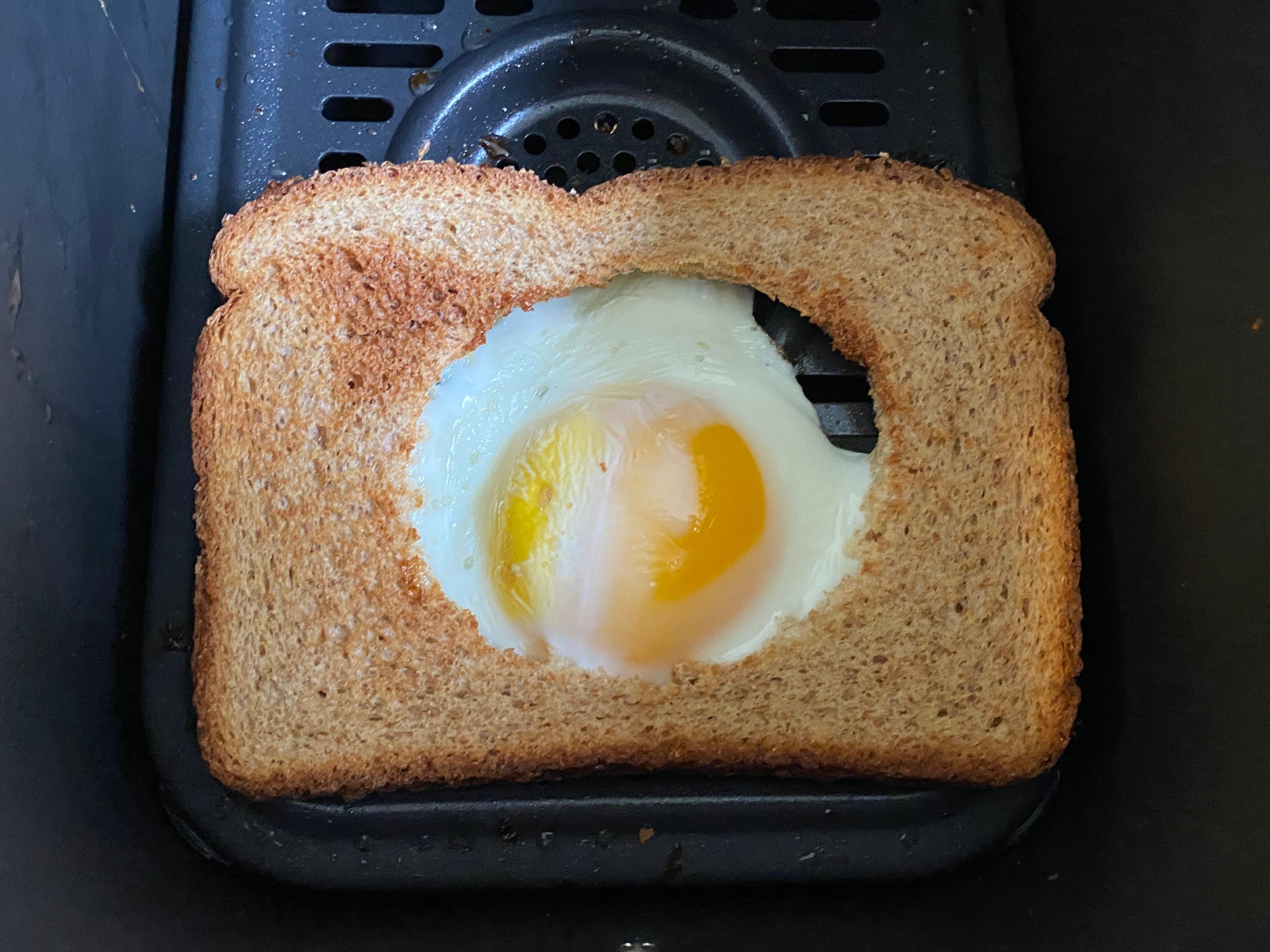 Chelsea Davis for InsiderThe dish held together quite well.

The dish came out looking and tasting like it should, since only a little bit of the cooked egg had seeped through to the bottom of the air-fryer basket. 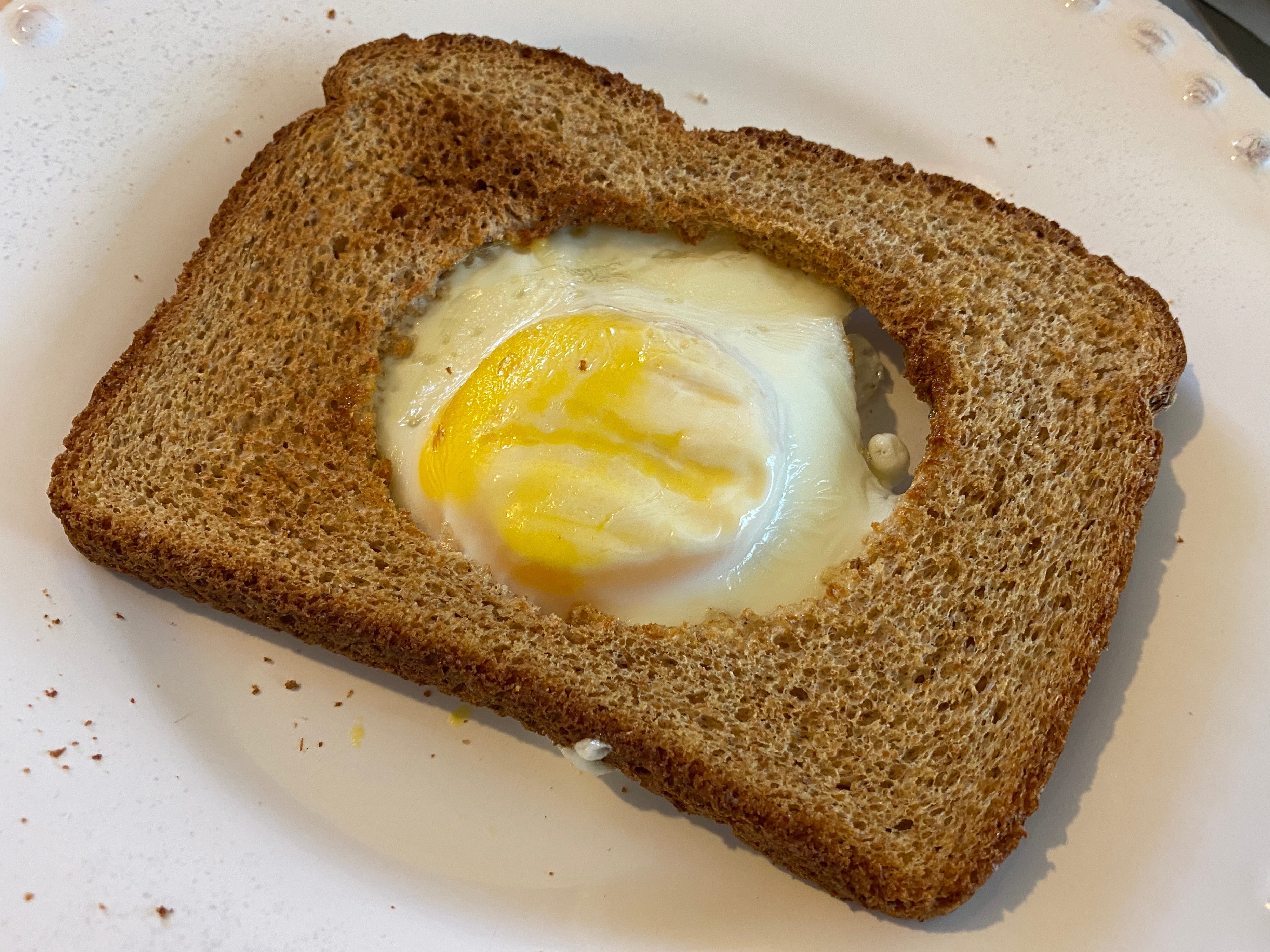 Chelsea Davis for InsiderI’d cook this meal less next time.

It was delicious, but I wished the egg was a bit runnier, so next time I’ll only cook it all for about two minutes per side or less.

Would I make it again: Yes. 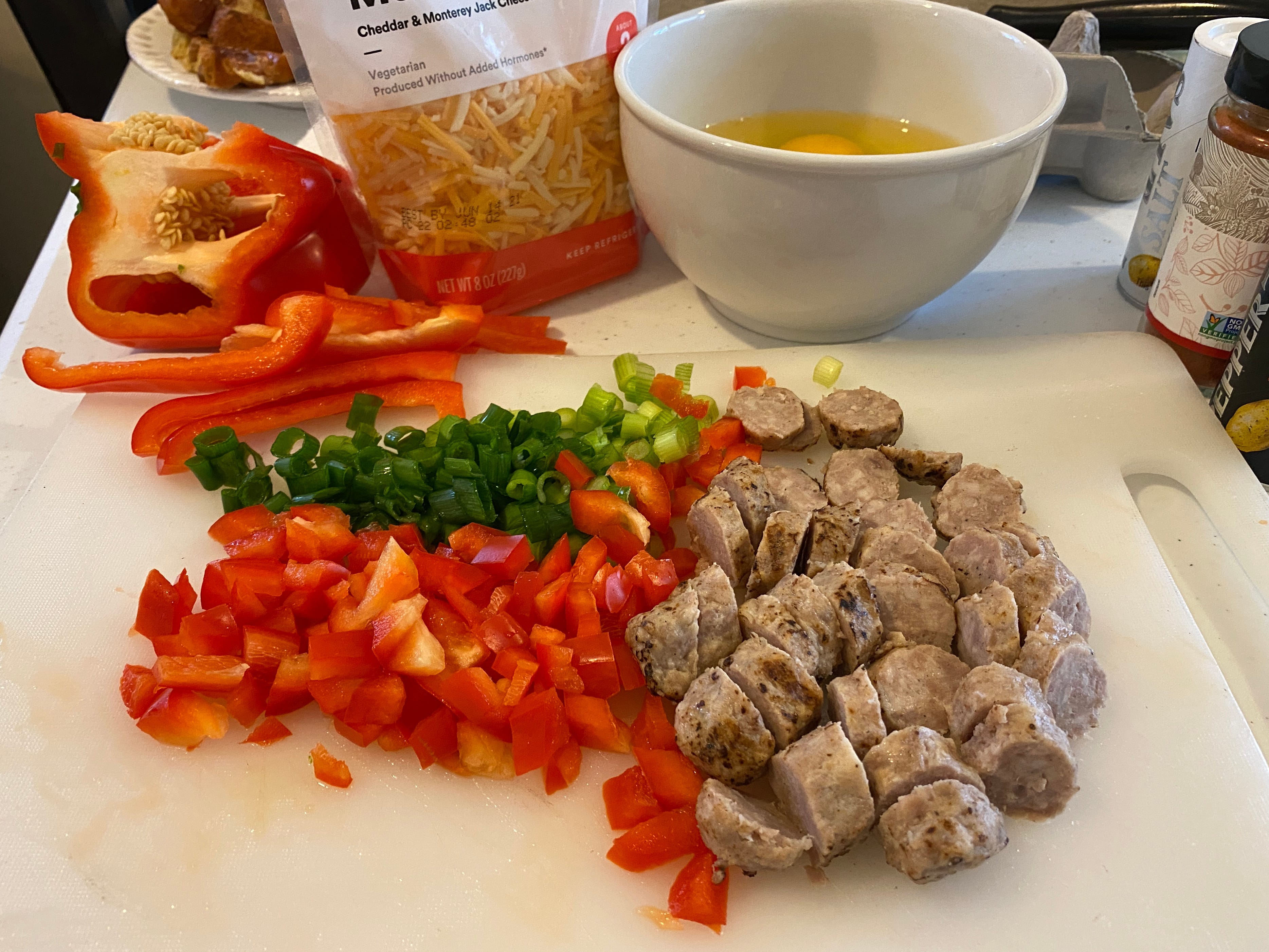 This frittata was unbelievably easy to make.

For this dish, I simply combined eggs, sausage, bell pepper, onion, and cheese, then whisked the mixture together with seasonings like paprika and garlic powder. 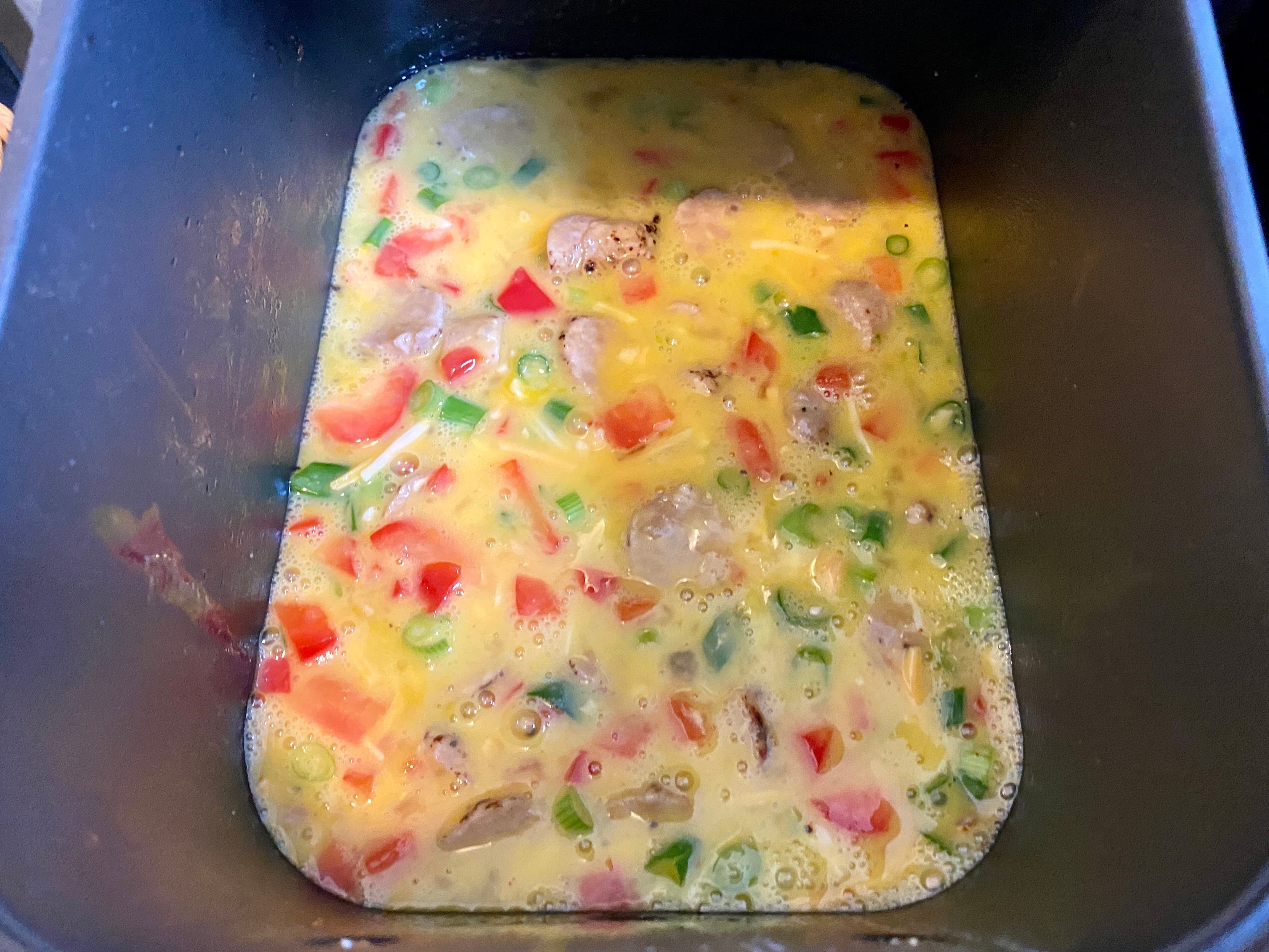 Chelsea Davis for InsiderI filled my air-fryer basket with the egg mixture.

The recipe says to cook the eggs in a cake pan, but instead I took the grate out and poured the frittata mix straight into the sprayed air-fryer basket – a move I was particularly proud of myself for doing.

I then let it cook for 25 minutes at 360 degrees Fahrenheit.

It tasted amazing, and I would’ve never guessed it was made in an air fryer 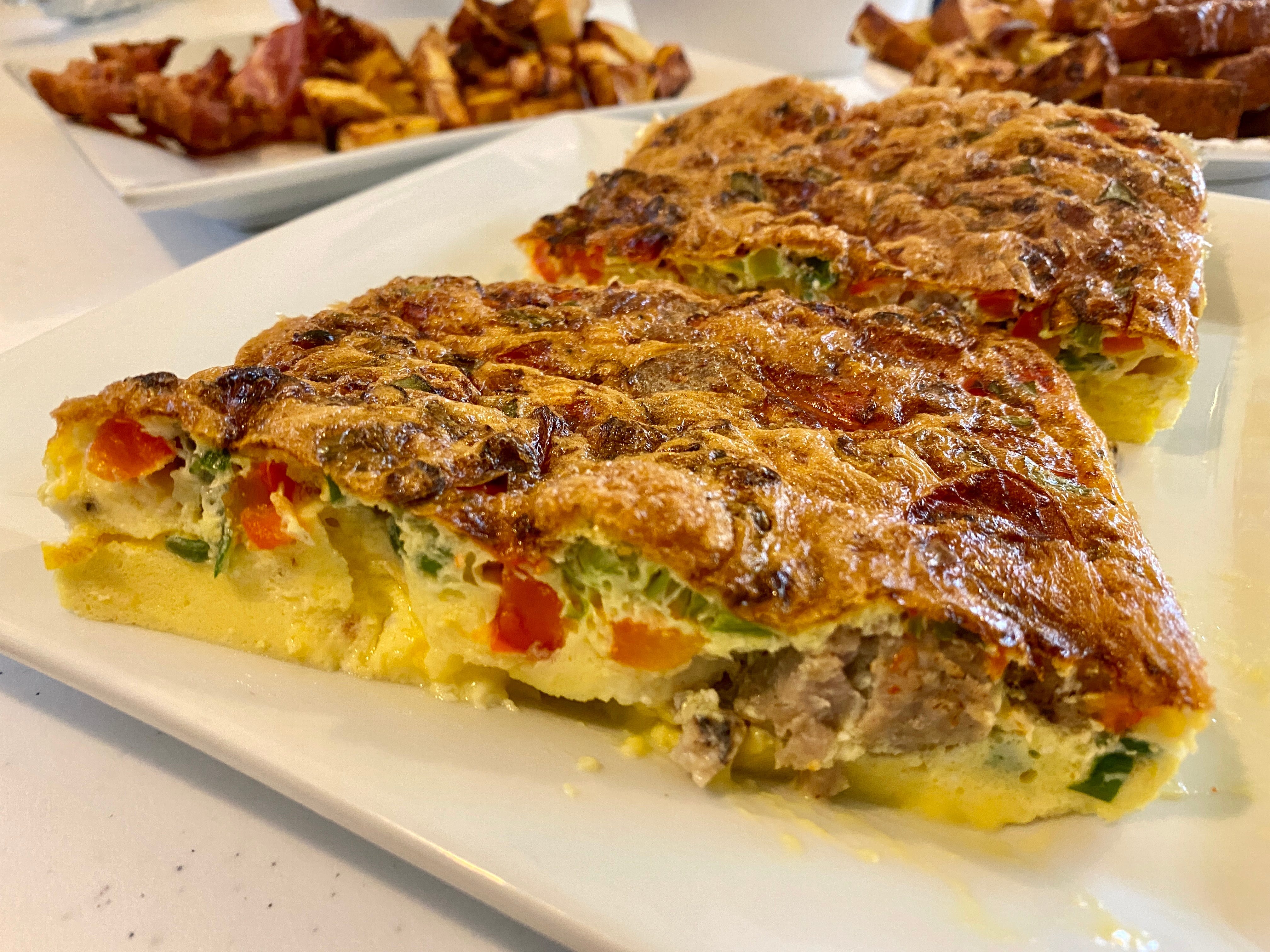 Chelsea Davis for InsiderThis frittata is the perfect breakfast to make for guests.

This frittata came out with the perfect consistency. It was cheesy, delicious, and so easy to make.

Plus it’s a customizable dish you can add your favorite ingredients to. For next time, I’m already thinking of including bacon, mushrooms, spinach, and cheese – the works.

Would I make it again: Yes, especially when cooking for guests.

I attempted to make French toast as my final recipe 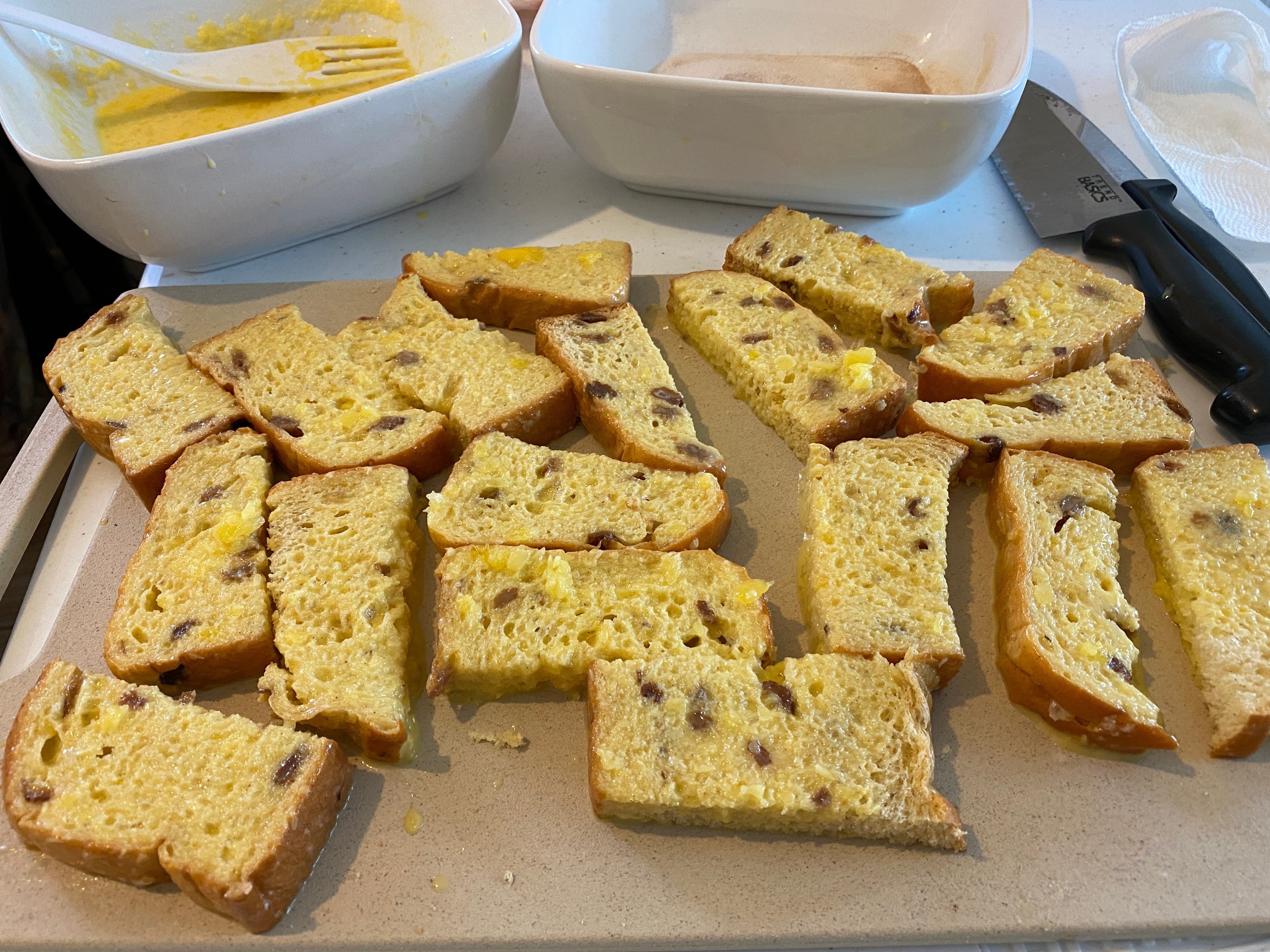 Chelsea Davis for InsiderI hoped this French toast wouldn’t come out mushy on the inside.

I’m a huge French-toast fan, but I hate when it gets too soggy or mushy inside, so I approached this method with caution.

To start, I whisked together the melted butter, milk, eggs, and vanilla in a bowl and made a sugar-and-cinnamon mixture in another.

Then I cut the pieces of bread into three strips and quickly dipped each stick into the batter, liberally sprinkling both sides with the sweet crumble. 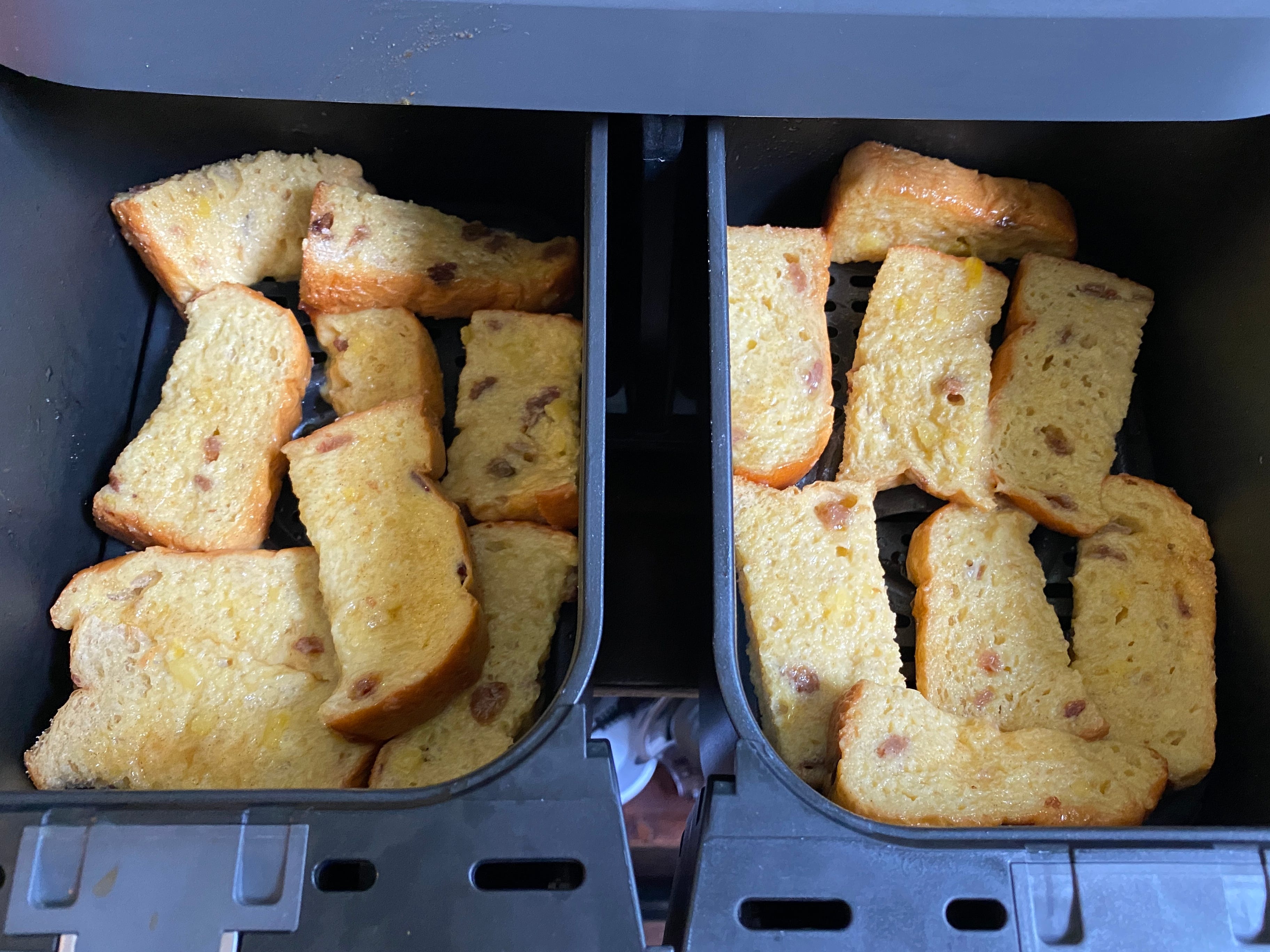 Chelsea Davis for InsiderI made sure to arrange these French-toast sticks in one layer.

After I placed the sticks in the air fryer, careful not to crowd the basket, I let them cook for eight minutes at 350 degrees Fahrenheit. 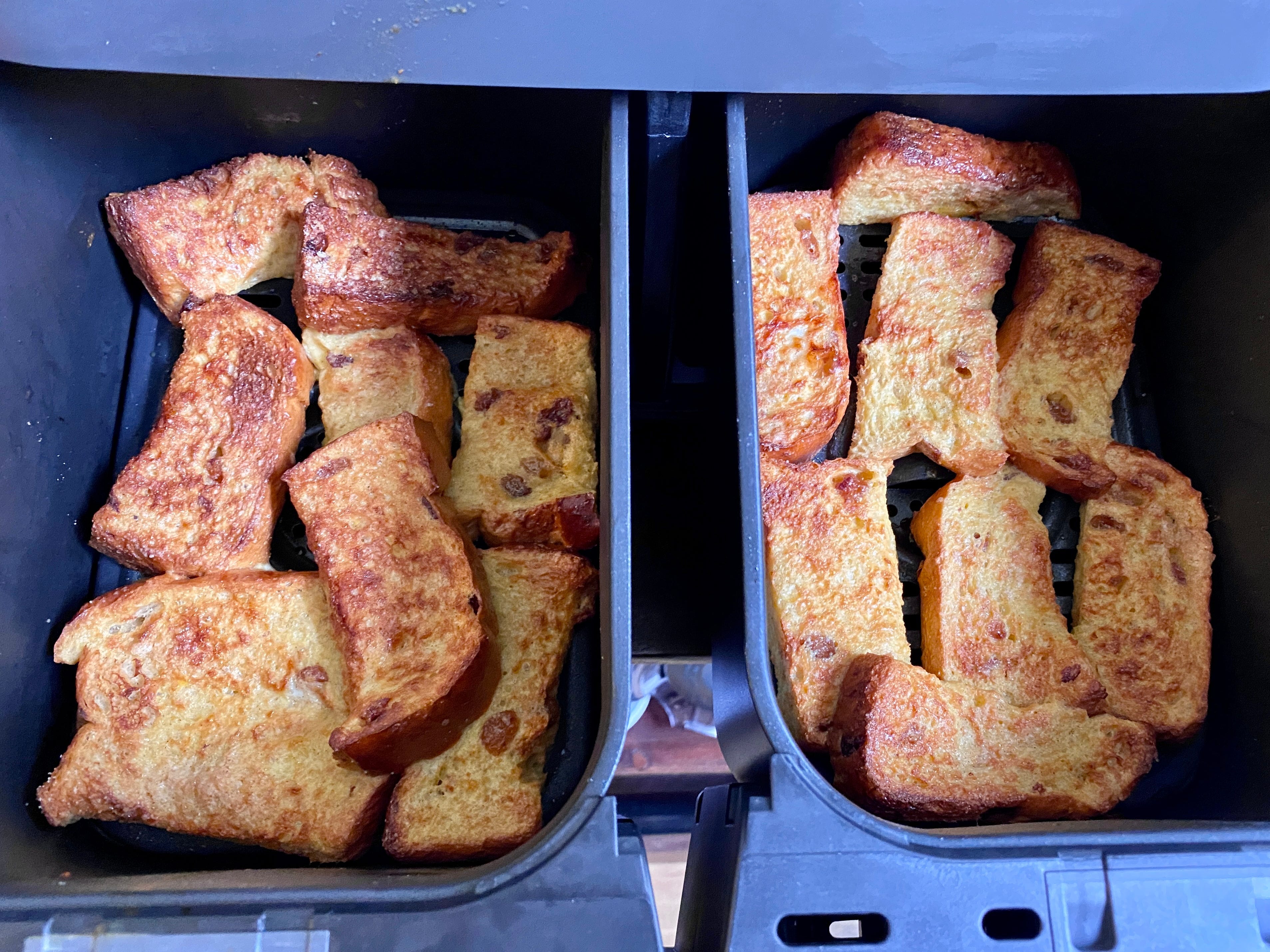 These French-toast sticks came out so tasty, they barely needed syrup. In addition to having a delicious crispy exterior, they thankfully weren’t soggy or mushy in the center. 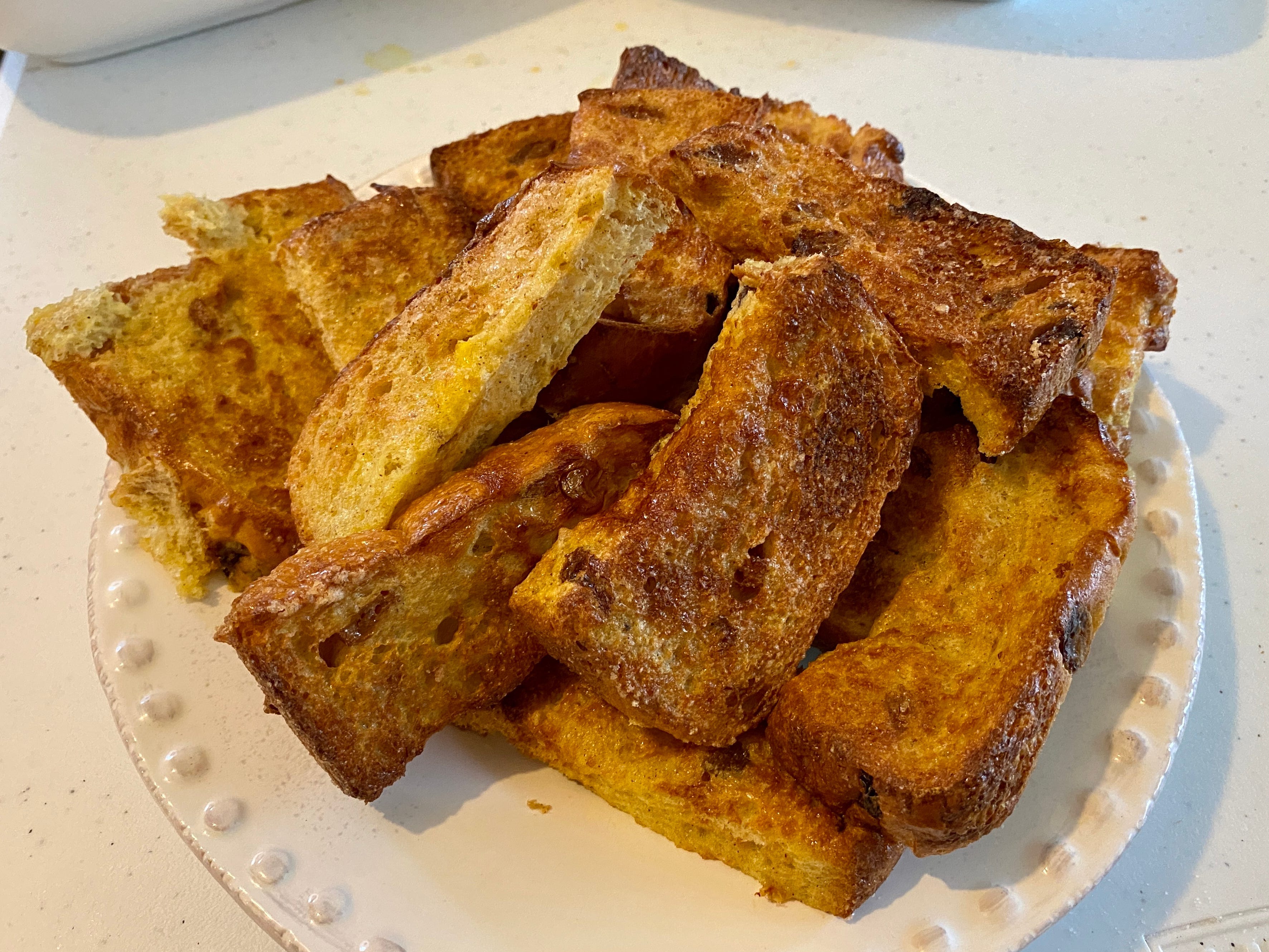 Chelsea Davis for InsiderThe sugar-and-cinnamon topping was a great touch.

Plus the sugar-and-cinnamon mixture gave each strip a delicate, caramelized crumble.

Would I make it again: Yes, for any reason.

All in all, I absolutely loved making these breakfast recipes in the air fryer

Using the air fryer made each recipe shine and cleanup a breeze, which I consider a huge bonus.

Also once the food is in the machine, you don’t have to worry about it or monitor it much at all. 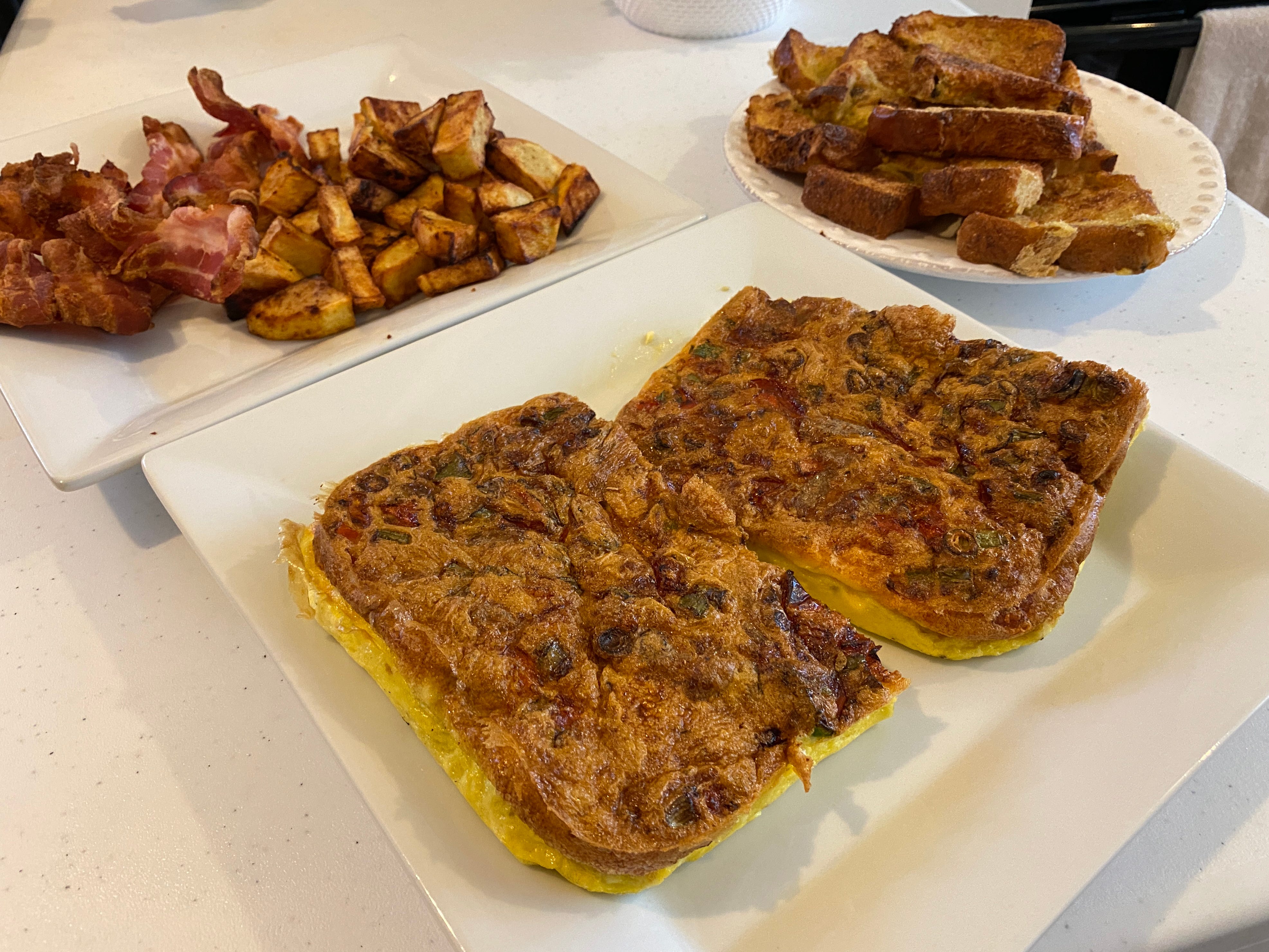 Chelsea Davis for InsiderUsing the air fryer to make breakfast is a game-changing move.

And to help you decide which air-fryer breakfast to tackle first, here is my final recipe ranking from worst to best:

Despite their popularity, the breakfast potatoes came in last place. I’m not big fan of home fries and prefer hash browns, but for what it’s worth, these were good.

But they needed some more pizzazz, which could easily be remedied by adding more seasonings and ingredients like onion, bell pepper, and cheese.

The eggs in a basket came in fourth place, as I wouldn’t recommend making it if you have a grate on the bottom of your air fryer.

That said, you can try using parchment paper made specifically for air fryers to avoid the egg seeping through, which I’ve seen some people suggest online.

And the frittata, French toast, and bacon were all phenomenal and tied for my top three. Each dish’s texture, taste, and appearance was just like the recipe promised, if not better.

I would 100% make these options again for any breakfast spread.