Gilead soared through February’s sharp market decline on hopes for its experimental coronavirus treatment, but one of its more bullish analysts thinks the drug has a 50% chance of approval in the most optimistic scenario.

RBC Capital Markets increased its research into the remdesivir compound as the coronavirus threat escalated. Human trials for the treatment began in the US in late February, and results aren’t expected until April. Until then, investors are mulling whether Gilead could reap major profits by offering the first virus treatment or tank as the drug misses expectations.

Several variables suggest the treatment could be effective, but much work remains before Gilead can be deemed the winner in the race for a cure, RBC said. The coronavirus drug is a shiny object and not the only exciting prospect coming out of Gilead, the analysts added.

“Bar for success is likely very low but we see at best 50/50 probability,” analysts Brian Abrahams and Gregory Renza wrote Wednesday. “Perhaps more importantly, the program should continue to put GILD back on investors’ radars.”

The biotech company’s stock price soared through the beginning of last week’s sell-off after a World Heath Organisation official deemed Gilead’s treatment the “one drug right now that we think may have efficacy.” Gilead shares gained as much as 13% through the week while the S&P 500 dove into a deep correction. Other biotech firms targeting the outbreak jumped amid intense market volatility.

RBC holds the second-highest price target for Gilead, and the firm’s analysts reiterated their bullishness despite their coin-flip hopes for the coronavirus compound. Gilead should be able to leverage the FDA’s pandemic drug approval process and market a successful treatment while coronavirus cases persist, they wrote. Pandemic sales could land between $US80 million and $US150 million, though the historical $US1.8 billion sales peak for Tamiflu signals there’s room for greater revenues, according to the research firm.

The company can also lean on its commercial HIV drug franchise and antivirals success to “solidify a new valuation floor for shares,” Abrahams and Renza wrote, adding it’s a “top pick” among biotech equities.

The biotech firm has 13 “buy” ratings, 13 “hold” ratings, and three “sell” ratings from analysts, with a consensus price target of $US74.61, according to Bloomberg data.


What rebound? These 2 charts suggest the recent stock sell-off has further to go 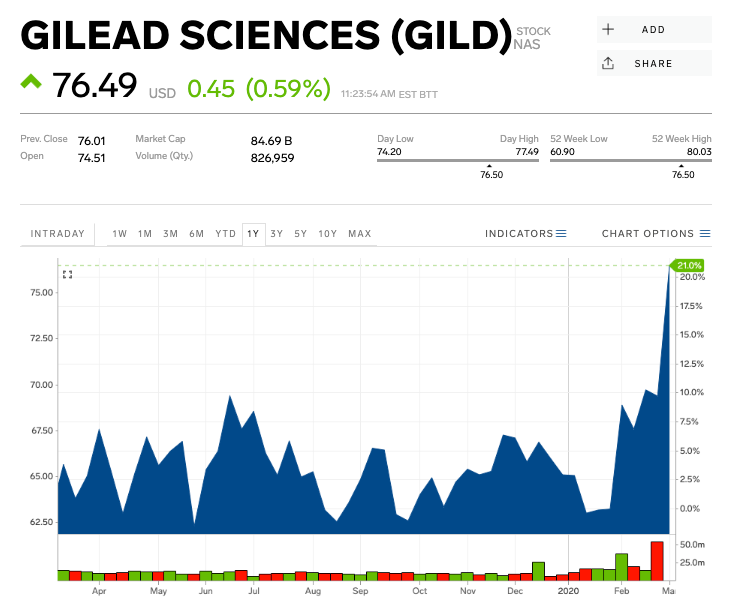