Giant, abandoned statues of 42 presidents' heads are crumbling in rural Virginia, and visitors are flocking to see them John Plashal is medical rep and recreational photographer whose passion is taking photos of abandoned places. When he found 42 giant, decaying statues of presidents’ heads on Howard Hankins’ property in Virginia, he knew he had come across something special.

“A lot of people think the statues reside in a wheat field or something, but they are on Howard Hankins’ industrial recycling property in Croaker, Virginia,” Plashal said.

Hankins helped construct the heads’ original home, Presidents Park, in Williamsburg, Virginia. The park went bankrupt in 2010 after six years, and Hankins was hired to put the statues in his stone crusher.

“Rather than doing that, he spent tens of thousands of dollars out of his own money to move the heads, which weigh over 20,000 pounds each, to his property to save them,” Plashal said.

Hankins had hopes of opening his own park or that the statues would be purchased by a wealthy art collector. However, about eight years after they were moved, they are still there, decaying on Hankins’ private property. Yet unlike when they were at Presidents Park, they have gained huge popularity. People just seem to be more interested in seeing them abandoned.

Last year, Plashal approached Hankins about doing tours of the park, and now visitors who book can visit the giant, austere, presidential heads.

David Adickes is the Houston-based sculptor who created the giant heads. Greg Smith/CORBIS/Corbis via Getty ImagesDavid Adickes with the statues he created in 1998.

“[Adickes] has actually created three sets of the statues,” Plashal said. One set is in Texas, one in South Dakota, and the last one in Virginia.

The Virginia set was originally on display at Presidents Park in Williamsburg.

Initially, the busts were well-kept in Presidents Park in Williamsburg. 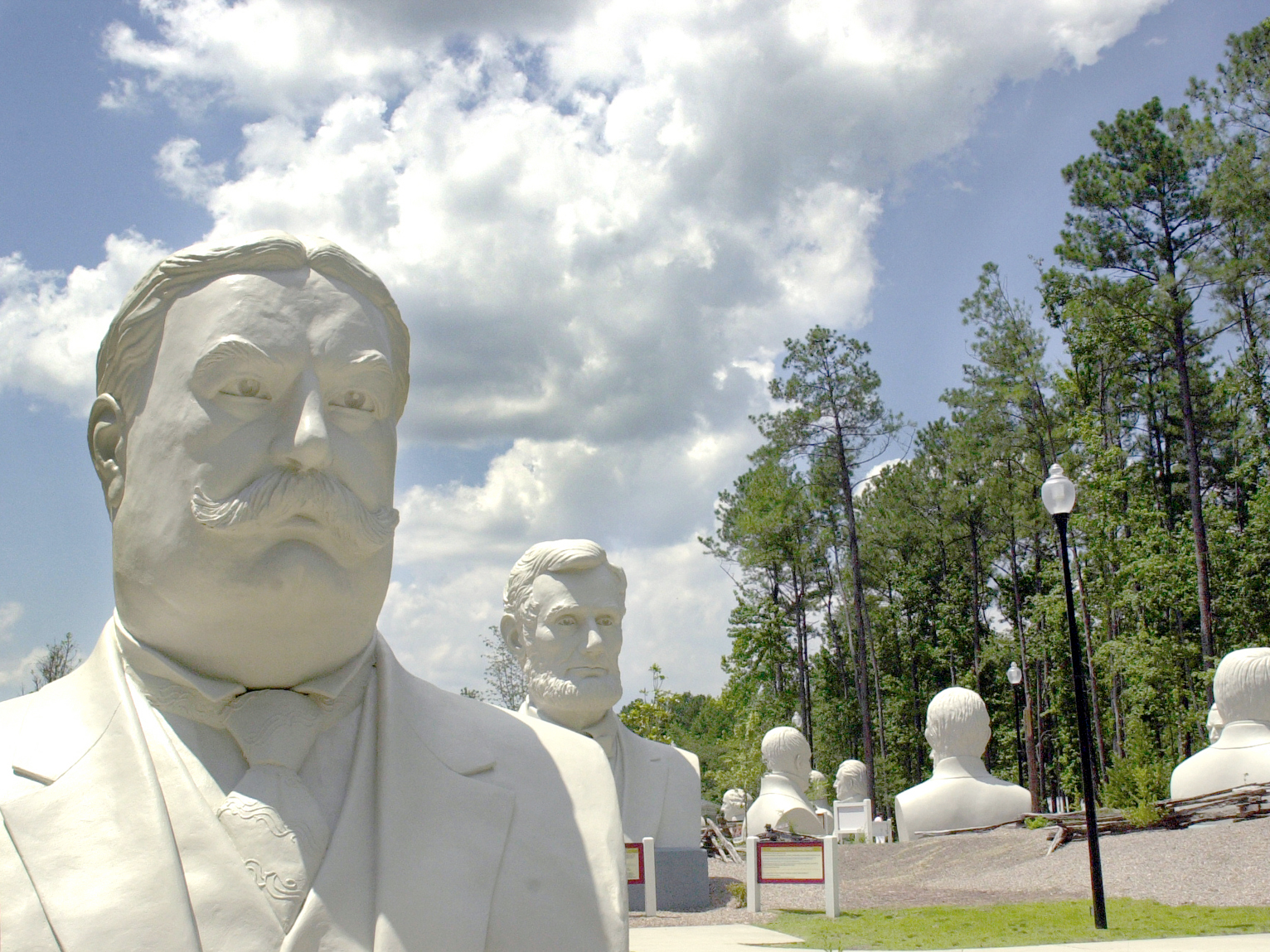 A private investor opened the 10-acre park in historic Williamsburg, Virginia, and it was in business from 2004 to 2010.

However, after six years, the park went bankrupt. “People weren’t all that interested in the heads when they were in Presidents Park,” Plashal told Insider.

Howard Hankins, who helped create Presidents Park, was told to destroy the heads in his industrial stone crusher. 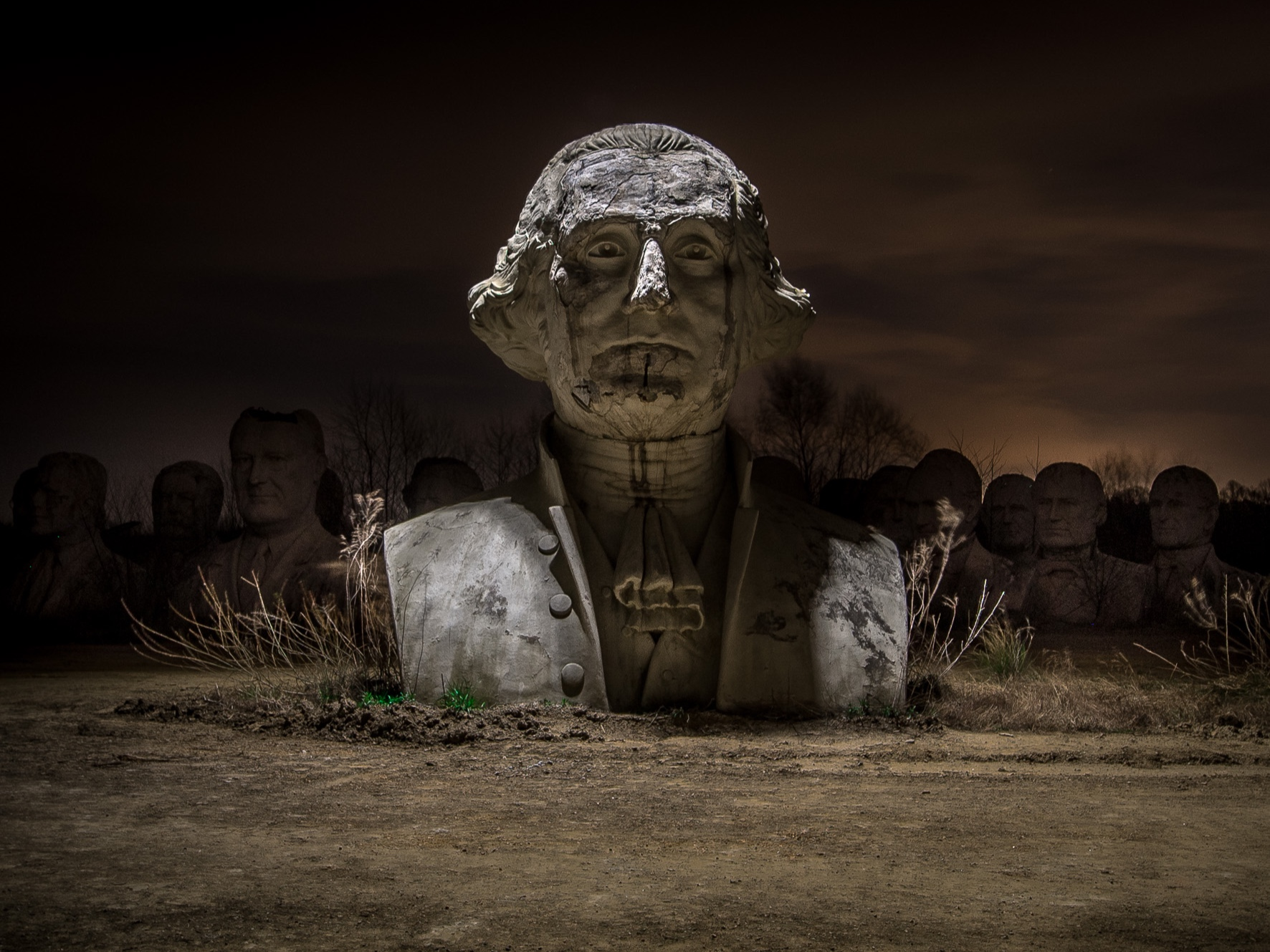 Hankins works as a stone-crusher, and many companies come to his property to dump concrete, which he crushes and then gives back to the community as a new material.

“[Hankins] was hired to take all of the 42 sculptures once the property was purchased by a business and then to put them in his stone-crusher,” Plashel said.

But Hankins didn’t have the heart to destroy the heads, so he transported them 15 miles north to his property in Croaker, Virginia. Patrick Smith/Getty ImagesThe detail in the statues can be seen here, as in the presidential ties.

“He spent tens of thousands of dollars of his own money to move the heads, which weigh over 20,000 pounds each, to his property to save them,” Plashal said.

Hankins owns a farm and industrial recycling property in Croaker, where the heads now reside.

He had big plans for the heads, according to Plashal.

“He hoped that he would either open his own park or some exotic and wealthy art collector would come in [with] a huge check. That was back in 2012 and here we are eight years later, and they still sit, decaying,” said Plashal.

Hankins was surprised to learn that many tourists had an interest in visiting the austere, giant, abandoned heads. The heads were popularised by incredible photos taken by tourists who visited them.

Plashal, a photographer, has a passion for capturing abandoned places, especially in Virginia, where he came across the heads. 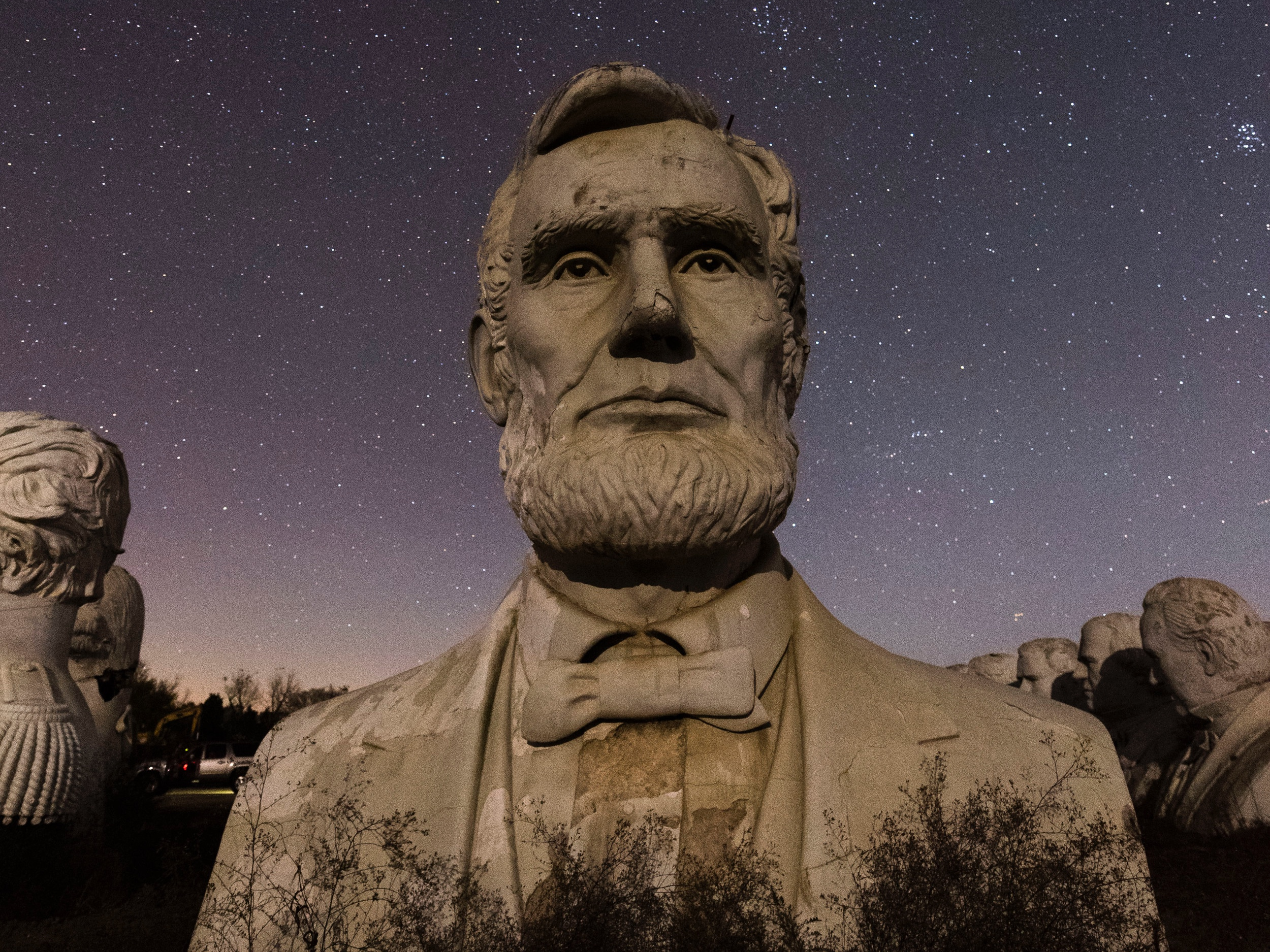 Plashal especially enjoys taking photos of the heads at night, when he can capture them in front of the stars, giving them back some of the majesty they may have lost as they decay.

Plashal took amazing shots like this one, and he realised the heads were something special. 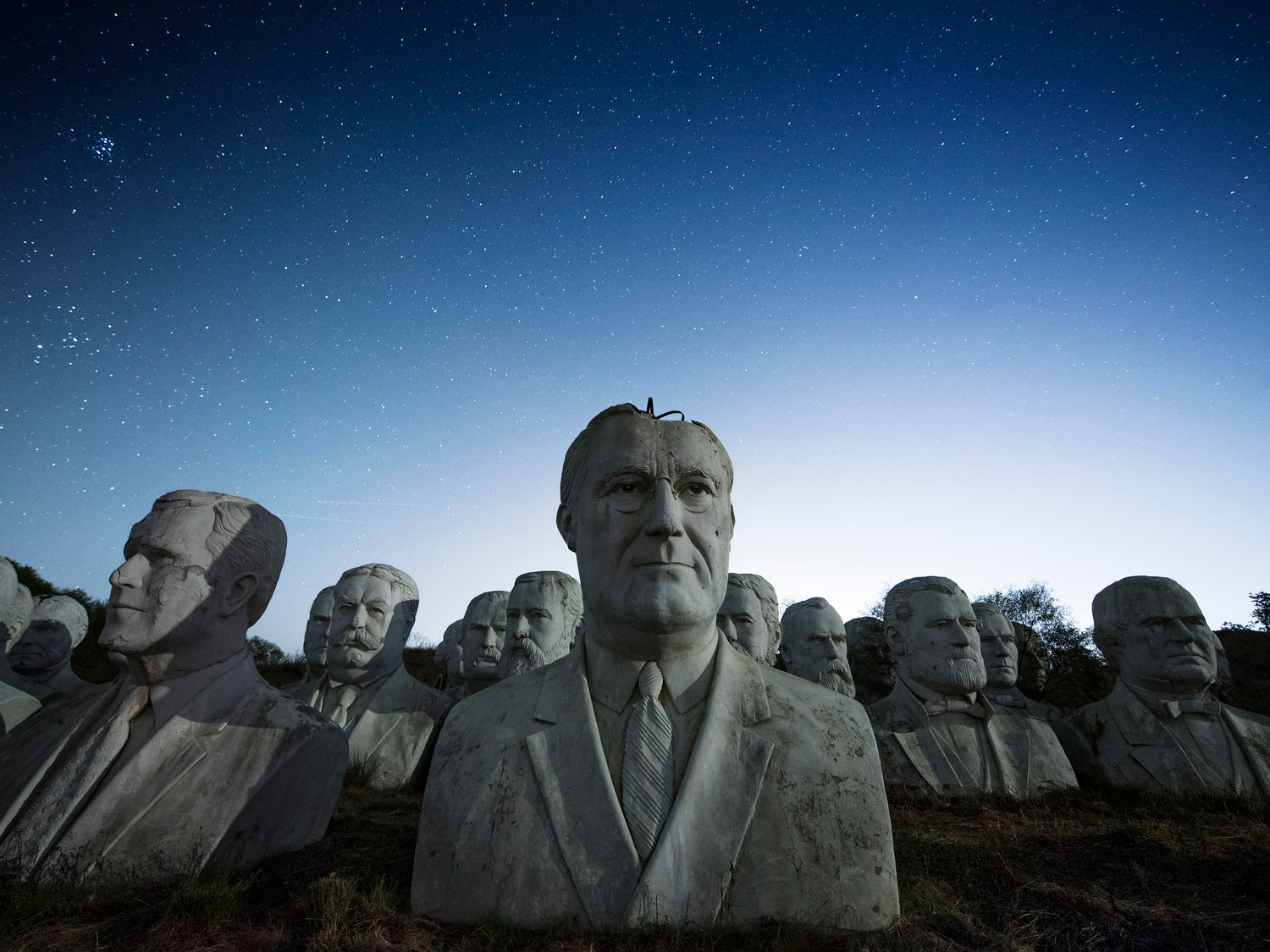 John PlashalPlashal enjoys taking photos of the heads at night.

Plashal realised that the heads were unlike any other abandoned place he’d been to. Their representation of powerful men was in sharp contrast to their state of decay.

He decided he wanted to help Hankins, who had spent a small fortune keeping the heads from being destroyed. Plashal had already gained some success as a photographer and storyteller, and was approached by the Virginia Museum of Fine Arts to be an adjunct speaker.

“They sent me around the state to storytell about all the history of the abandoned places that I find and document and photograph,” Plashal said.

He knew people have an interest in abandoned places, and that Hankins’ property had garnered much interest through social media. “So many people have been Snapchatting and Instagramming and tagging #presidentsheads and it just spreads like wildfire,” Plashal said.

He realised he could bring his ability to storytell to the abandoned heads.

Since the heads were on Hankins’ private property, all “visitors” had actually been trespassing. Brendan Smialowski /AFP/Getty ImagesThe statues have been left to decay outside.

“For seven years the heads were on private property and the only people getting back there were trespassers,” Plashal said.

So Plashal came up with a plan to conduct tours of the heads on Hankins’ property. Brendan Smialowski /AFP/Getty ImagesJohn Plashal gives a tour of the busts in 2019.

“I approached Hankins about doing it because the presidents’ heads are the ultimate abandoned place in Virginia – if not the world – and it blew up,” said Plashal, who’s pictured giving a tour.

The heads in their current state are much more popular than Presidents Park ever was. “There’s a lot of people who want to see these things,” Plashel told Hankins.

Though Hankins had legal concerns about the potentially dangerous nature of the heads, Plashal has guests sign waiver forms before entering the property.

There’s something about the heads’ eerie quality and out-of-place location that makes them special. Brendan Smialowski /AFP/Getty ImagesTourists pose in front of the busts in Virginia.

Yet many of the statues are crumbling, as pictured in this aerial shot. Brendan Smialowski /AFP/Getty ImagesAn aerial view shows that many of the heads have caved in.

The heads are only available to visit on certain weekends, since most of the time the property is used as an industrial recycling site.

But Plashal believes the heads will attract interested visitors for years to come, turning it into an Easter Island of North America.

Plashal offers a few different day tours and those who are interested can go on his three-hour walking tour. It’s best to book in advance, since they fill up fast, and you can’t visit the park otherwise.