Ossoff and Warnock win Georgia runoffs, handing Democrats control of the US Senate

Democrats won both runoff elections in Georgia to regain control of the US Senate, according to projections from Insider and Decision Desk HQ.

Decision Desk HQ projected at 11:13 p.m. on Tuesday that Sen. Kelly Loeffler, who was appointed to fill a vacancy in late 2019, lost to the Democrat Raphael Warnock.

And it projected at 2:14 a.m. on Wednesday that first-term Republican Sen. David Perdue was defeated by the Democrat Jon Ossoff.

Two US Senate runoffs took place in the formerly safe-Republican Georgia, which in November voted for a Democratic presidential nominee, Biden, for the first time since 1992.

In Georgia, if no candidate earns at least half the overall vote in a given election, the race goes to a runoff between the top two vote-getters. To ensure a candidate earns over 50% of the vote, no third-party or write-in candidates are permitted in runoff elections.

Republican Sen. David Perdue, a former business executive first elected in 2014, was running for a second term against the Democrat Jon Ossoff. Ossoff is a 33-year-old CEO of an investigative-documentary filmmaking company and a former US House staffer who was the Democratic nominee for the June 2017 special election for Georgia’s 6th Congressional District.

Sen. Kelly Loeffler, a wealthy Atlanta businesswoman and owner of the WNBA team the Atlanta Dream, was appointed in late 2019 to replace Sen. Johnny Isakson, who retired before the end of his term because of health concerns.

In November, Loeffler competed in a special jungle election with 20 other candidates to serve out the rest of Isakson’s term, which was set to expire in 2022.

Loeffler and the Democrat Raphael Warnock, senior pastor at the Ebenezer Baptist Church in Atlanta, emerged from the jungle election as the top two vote-getters.

Warnock led with 32% of the vote compared with 26% for Loeffler and 20% for GOP Rep. Doug Collins, the third-highest vote-getter.

The worsening COVID-19 pandemic, including the high-stakes effort to get a coronavirus relief bill passed through Congress and the failed push for $US2,000 stimulus checks, helped shape the dynamics of the runoff races.

Themes of class and economic status also played a defining role. Ossoff and Warnock accused Loeffler and Perdue, both of whom have high levels of personal wealth and are prolific investors, of using their positions in the Senate for profit, including with pandemic-related stock trades. Both senators denied any wrongdoing.

In turn, Loeffler and Perdue tied Ossoff and Warnock to policies like defunding the police, a Green New Deal, Medicare for All, and other progressive priorities to paint both as advancing a socialist agenda.

Loeffler, in particular, hammered Warnock as “radical” in debates and ads and said Warnock would be the first “Marxist” senator. She has zeroed in on comments Warnock had made during sermons and on guests who had appeared at the Ebenezer Baptist Church, as well as Warnock’s personal life. 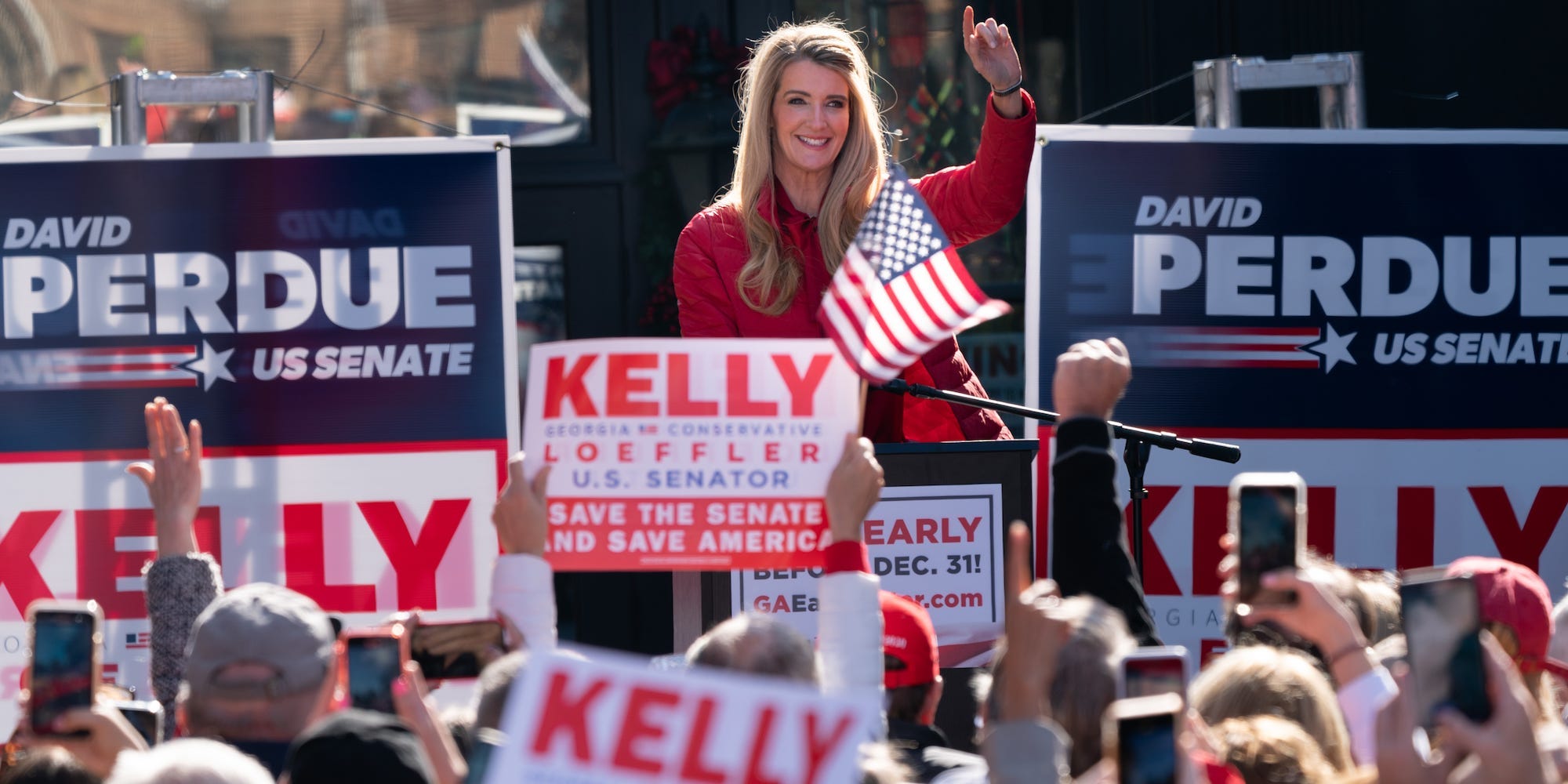 Elijah Nouvelage/Getty ImagesSen. Kelly Loeffler of Georgia at a campaign event on December 21 in Milton, Georgia.

Entering the runoffs, Republicans controlled 51 seats compared with 48 for Democrats (Perdue’s term technically expired at noon on Sunday pending the outcome of his runoff race, leaving the Senate with 99 members). The Democrats flipped two Senate seats in Arizona and Colorado in November but lost Sen. Doug Jones’ seat in Alabama.

With the Democrats winning both seats, the composition of the Senate will be 50-50, with incoming Vice President Kamala Harris as the tiebreaking vote. Because of Harris’ role as president of the US Senate, Democrats now hold the majority in the chamber.

Ossoff won’t be up for reelection again until 2026. But the Loeffler-Warnock race was only a special election, and Warnock will have to prepare to run again in 2022 for a full term.

The runoffs seemed poised to be an inflection point in a bitterly contentious fight within the GOP after President Donald Trump’s narrow loss in Georgia’s presidential election.

Trump and his allies waged an all-out assault on the integrity of the state’s election process and continue to insist he would have won if not for massive fraud â€” even after a risk-limiting audit that included a hand recount of all 5 million ballots cast in the presidential race and a subsequent machine recount requested by the Trump campaign affirmed Biden’s victory.

Trump has spent weeks publicly attacking Georgia’s Republican governor, Brian Kemp, and secretary of state, Brad Raffensperger, for their refusal to echo his unfounded allegations of massive election fraud, with Loeffler and Perdue also calling on Raffensperger to step down as he staunchly defended the integrity of Georgia’s election.

On Saturday, Trump called Raffensperger to explicitly ask him to overturn the twice-certified Georgia election. In a stunning hour-long phone call, a recording of which was obtained and published by The Washington Post, Trump unsuccessfully pleaded with Raffensperger to “find 11,780 votes” for him and regurgitated long-debunked conspiracy theories and misinformation about the election.