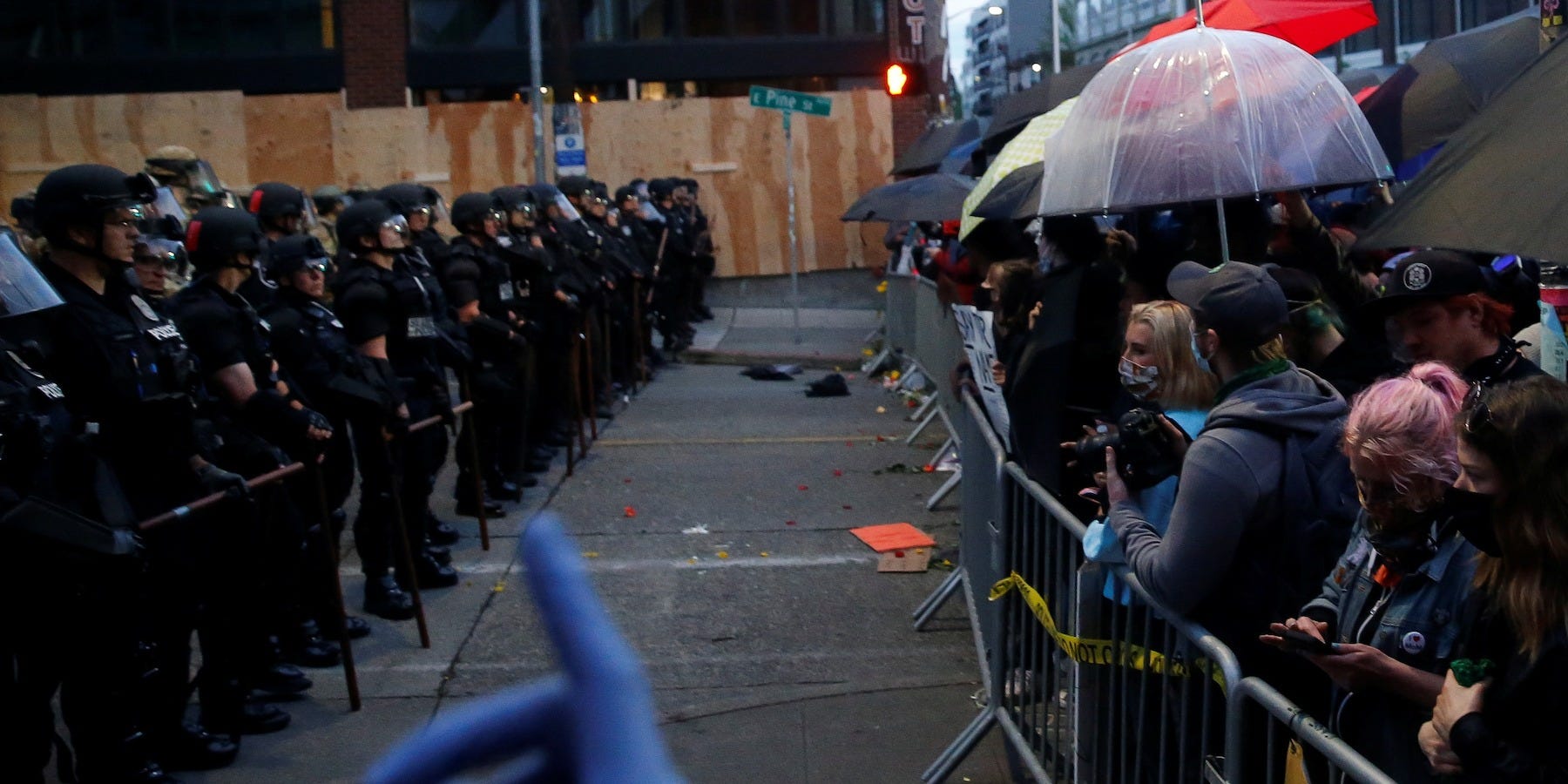 REUTERS/Lindsey WassonProtesters using umbrellas as shields stand opposite the Seattle Police near the department’s East Precinct on June 2, 2020.

CNN reported that dozens of people stood in front of a police barrier with umbrellas on Tuesday, to protect themselves against any chemicals police might use against them.

Tuesday’s protests were sparked by the death of George Floyd, a black man who died after a police officer knelt on him. Demonstrations against police brutality have since spread to as many as 14 American cities and around the world.

Seattle looks a hell of a lot like Hong Kong did last July right now, pic.twitter.com/AOlQGUBsfy

Micheal Spears, a reporter for Seattle news outlet KIRO 7 Seattle, tweeted that protesters on the front lines of the demonstration outside of the Seattle Police Department’s East Precinct on Tuesday were opening umbrellas, and that the crowd was chanting “No more gas.”

The new symbol for Seattle protests?

Bringing umbrellas to protests may also be a growing symbol in Seattle.

Local news outlet My Northwest reported that people protesting on Tuesday had brought umbrellas in response to an incident on Monday, where protesters were met with gas after an officer grabbed a woman’s umbrella away.

An aerial video of a street on Seattle’s Capitol Hill on Monday shows what appears to be peaceful protesters chanting: “We don’t see no riot here, take off your riot gear,” before the police begin to spray into the crowd.

The Seattle Times reported that officers fired tear gas and pepper spray into the crowd.

These protesters in Seattle are literally chanting “we don’t see no riot here, take off your riot gear” & doing nothing else but standing peacefully when the police start throwing tear gas & firing into them https://t.co/Bde3XQC27f

Another view of the scene on Monday showed a close-up of an officer in riot gear pulling the pink umbrella over the barrier, and starting to spray into the crowd. The person filming the video says it is pepper spray:

oh really? you want a link to the stream where the huge chunk prior to this moment was 100% peaceful?
this is a POLICE RIOT.#seattleprotest#fuckthepolice#blacklivesmatter pic.twitter.com/zdNOAdzBvv

A post in the Reddit group for Seattle on Tuesday urged people to being pink umbrellas to protests if they could as a “powerful symbol against what happened.”

The author also wrote: “We need the umbrellas for our protection while we are protesting.”

Seattle police declared the protest on Monday a riot. The force said the crowd threw rocks, bottles, and fireworks at officers, and tried to breach the barricade. 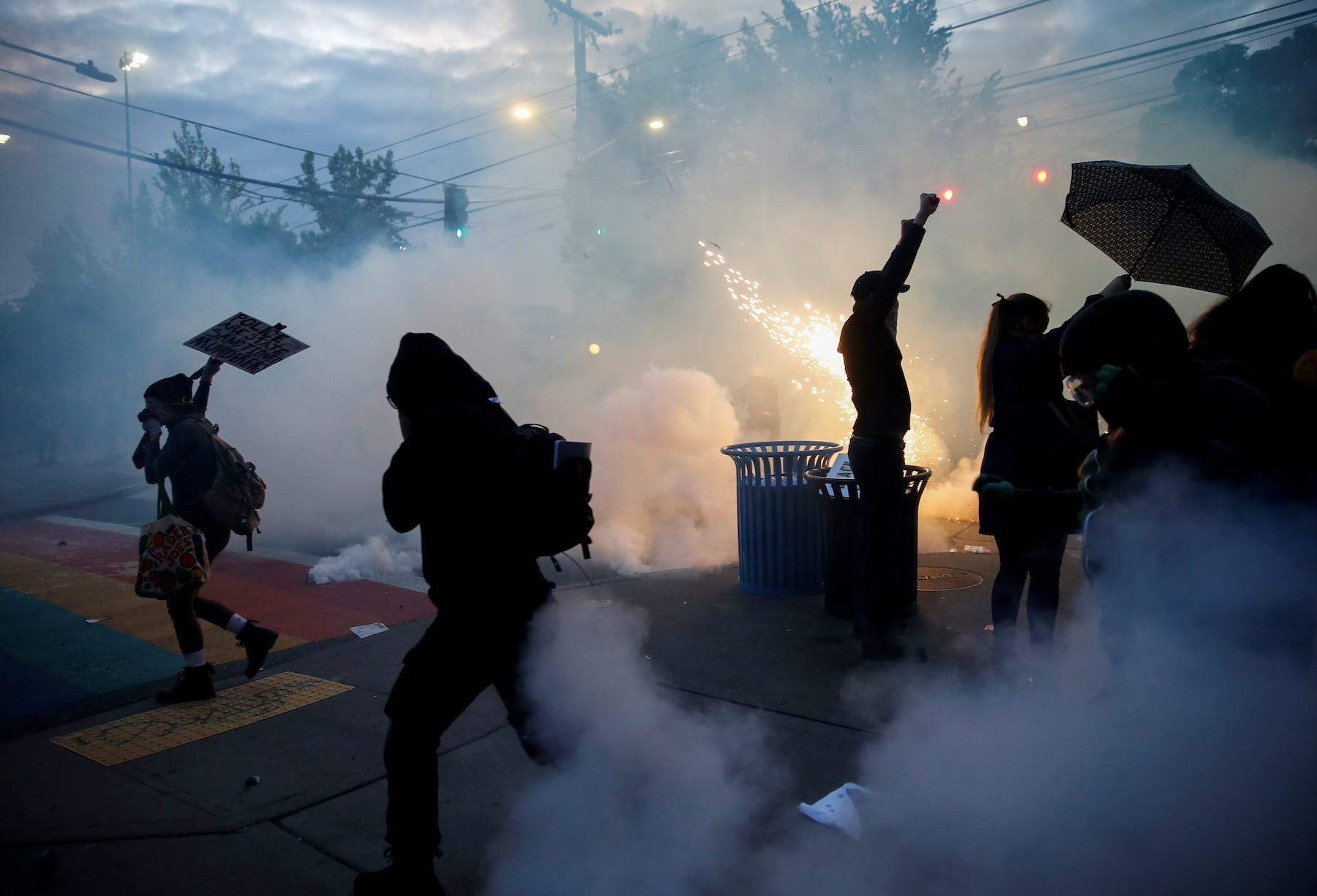 REUTERS/Lindsey WassonProtesters disperse as tear gas, pepper spray, and flash-bang devices are deployed by Seattle police during a protest in Seattle on June 1, 2020.

The characterization was heavily disputed on social media, and many used the video footage as proof.

Omari Salisbury, a citizen journalist who captured the close-up footage of the officer taking the woman’s umbrella and who has been documenting the city’s protests, told The Seattle Times that he saw no signs that the police had tried to de-escalate the situation before firing into the crowd.

“I took in so much tear gas,” he said. “I got hit with the pepper spray and the tear gas.”

Umbrellas became a key symbol of pro-democracy protests in Hong Kong in 2014, which demanded free elections.

They were used by protesters to shield themselves from tear gas and pepper spray, but became a wider symbol and led to the movement being known as the “Umbrella Movement.” 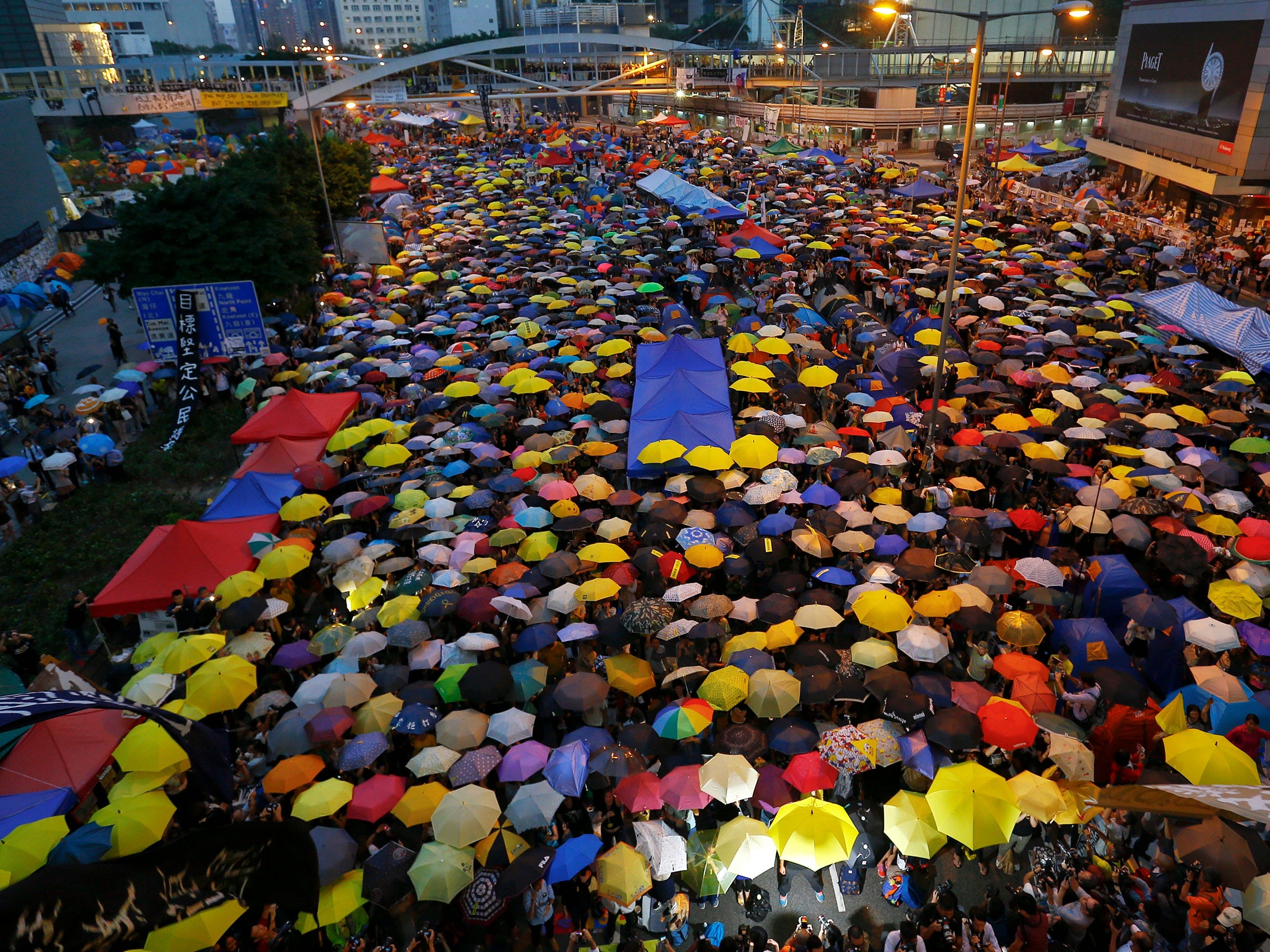 Bloomberg also noted that they became tools for privacy under China’s heavy surveillance – and that police in Hong Kong at the time designated them as weapons and forbade residents from buying them online.

Their use, both practical and symbolic, has continued, including in the 2019 protests that began in opposition to a now-shelved bill that would have allowed people in Hong Kong to be extradited to China, but developed into wider pro-democracy and anti-police-brutality protests.

Protesters even got tattoos of the famous yellow umbrella protest symbol.