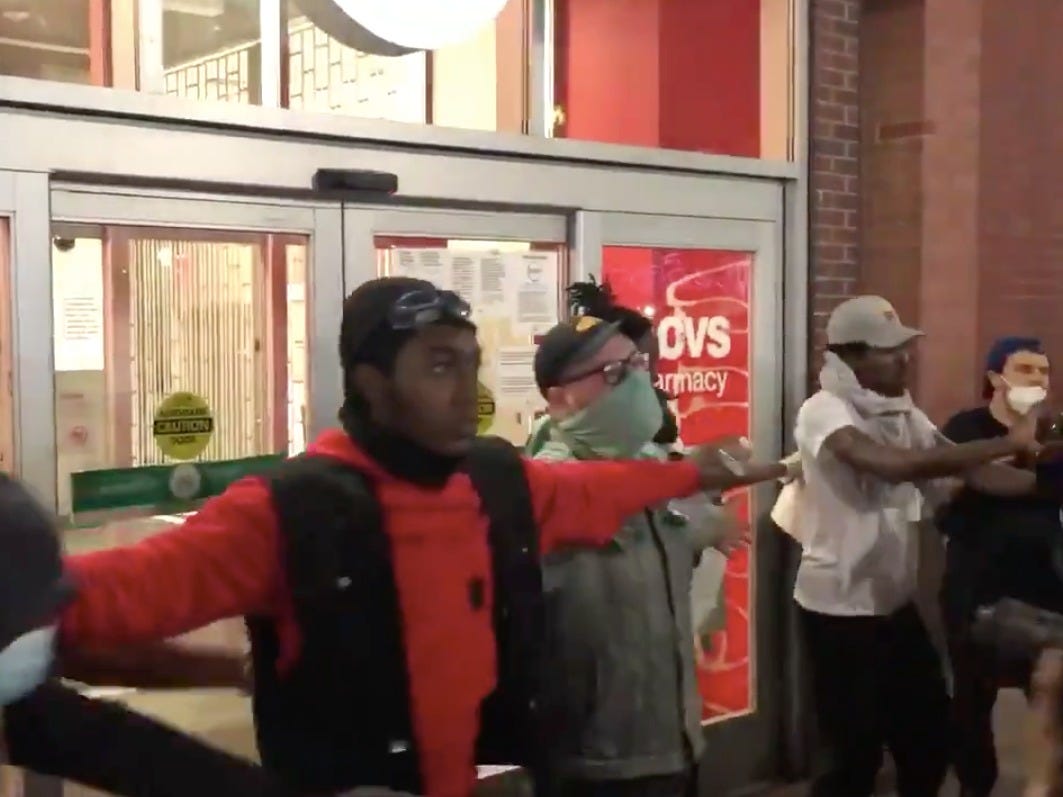 Andrew SolenderA video of protesters guarding a Target store in Brooklyn, New York on May 30, 2020.

A widely-shared video on social media shows protesters in Brooklyn blocking the entrance of a Target store to keep looters from destroying it during a George Floyd demonstration on Saturday.

In the video posted on Twitter by Forbes reporter, Andrew Solender, the protesters can be seen forming a human wall in front of the shop in New York City, shaking their heads and shouting “No” and “F*** no” at other protesters, who were trying to loot it.

The footage, which has been widely shared on social media, comes as cities across the country are witnessing outbreaks of violence, vandalism, and destruction after the death of George Floyd, the Minneapolis man who was killed earlier this week when police officer knelt on his neck for roughly eight minutes.

Some protestors in Brooklyn calling to loot the Target, but organizers are rushing in front of the store to stop them, keep things non-violent #nycprotest pic.twitter.com/6x70cpcjep

Target has seen many of its shops looted and destroyed during these protests. As a result, it announced on Saturday that it will be temporarily closing 175 stores across several states.

“Our focus will remain on our team members’ safety and helping our community heal,” the retailer said in a statement published on CNN.

While most of the demonstrations started off peacefully, some have also resulted in arson and looting. Police vehicles have been vandalised, or lit on fire in numerous cities, including New York City, Chicago, Miami, and Los Angeles.

Some protesters are becoming increasingly frustrated with people who have taken to looting and arson, arguing that their actions are obscuring the message of the demonstrations.

On Saturday night, a protester in Minneapolis gave an impassioned speech on CNN, in which he said, “something is wrong” with people who are looting shops and that what they’re doing “it’s not being done in George Floyd’s name.”

“If you cannot stand up and fight the good fight and you want to be a cheater and go ahead and take what we’re trying to do…something is wrong with you,” the unidentified man said.

"If you cannot stand up and fight the good fight and you want to be a cheater…. something is wrong with you."

A protester in Minneapolis condemned "opportunistic" looters undermining the message of peaceful demonstrations across the US. https://t.co/2K1nDvaaFH pic.twitter.com/LYIE5JLIsM

Meanwhile, public officials have been trying to restore order in their cities. Atlanta Mayor Keisha Lance Bottoms urged protesters to “go home” on Friday after people vandalised and shattered the entrance of CNN’s local headquarters.

“This is not a protest,” Bottoms said. “This is chaos. A protest has purpose.”

Speaking at the Kennedy Space Centre in Florida on Saturday, Trump said: “The death of George Floyd in the streets of Minneapolis was a grave tragedy. It should never have happened. It has filled Americans all over the country with horror, anger, and grief,” Trump said.

“What we are seeing now on the streets of our cities has nothing to do with justice or with peace,” Trump added. “My administration will stop mob violence, and we’ll stop it cold. It does not serve the interests of justice or any citizen of any race, colour, or creed for the government to give in to anarchy, abandon police precincts, or allow communities to be burned to the ground. It won’t happen.”