Sunday’s “Game of Thrones” Loot Train Attack showed the Dothraki slaughter the Lannister army with the help of Dany and her dragon, Drogon. It was the show’s largest battle sequence so far — even larger than last year’s Battle of the Bastards — with complicated sequences to film mixing both visual effects and practical effects.

The addition of a dragon the size of a 747 didn’t make things easier either.

HBO released an excellent behind-the-scenes look at the many details that went into planning and executing one of the show’s most complex battles. While Dany and Drogon consisted of a lot of special effects, there were also a lot of moments that used practical effects.

From burning stuntmen on fire to having Emilia Clarke ride a contraption similar to a mechanical bull, keep reading to see what went into bringing Monday’s giant battle to life.

Tyrion looks over the battlefield conflicted between his Queen and his brother, Jaime. In reality, he was looking at a piece of green screen. HBO
Dinklage had to use his imagination when imagining the battlefield aflame.

There were a lot of men in place for the battle scene against Daenerys and the Dothraki. HBO
Jaime was staring at a lot of people, but no where near that many.

Not all of that was CGI. A lot of them were actually in place.

HBO
Actor Nikolaj Coster Waldau (who plays Jaime Lannister) was even on a horse.

A lot of the scenes where Daenerys is seen riding her dragon, Drogon, obviously didn't really take place.

HBO
Daenerys and Drogon descend on the Lannister army.

Instead, two different cameras were used to simulate the dragon flying overhead. One of those was a giant drone.

HBO
Here's what the FlyCam drone looks like that they used on set.

Episode director Matt Shakman said in order to make it look like we were seeing scenes from a dragon's point of view they needed something that moved fast. The production crew used both a Spidercam -- a camera that can move about 70 mph running down a wire -- and a high-powered drone from FlyCam to capture overhead views of the battle scene.

'So we can fly over things safely and also have interactive effect on the ground and capture all those elements that will have a dragon either in front of the lens or above the lens,' said producer Chris Newman.

Clarke really did ride a dragon on set though. It just looked a bit different. HBO
Emilia Clarke rode atop a motion-simulated structure in front of a green screen in Belfast.

The base Clarke rode on moved in sync with the animation done for Drogon to give the appearance she was actually riding on the dragon.

Clarke likened it to being on a thrill ride.

'So being on this theme park ride is kind of what it is, and you're strapped in. Then looking like you are controlling it when there's so much going on,' said Clarke in the featurette. 'You just got to harness every single bit of imagination you have and just use it.'

The scenes were then put together with ones filmed.

They created the illusion Dany was swooping in over everyone. When Dany was pulling the spear out of her wounded dragon, she was really pulling at a spear. HBO
Dany works quickly to remove the spear from Drogon.

There just wasn't a giant dragon at the end of it. HBO
Clarke had to use her imagination there, too.

And the scene where Drogon was seen blowing the wagons to smithereens?

Those were blown up on set.

HBO
Drogon may not have set actually fire to these carts, but they did go up in flames.

The hardest part was getting the timing just right to make sure the different carts blew up one after another and not together. The flames were made larger in the edit room.

'Because there was only one take there was a lot that could go wrong,' said SFX supervisor Sam Conway.

Drogon didn't only set the loot on fire. He also burned most of the Lannister army to a crisp. While some of those were CGI, the production crew really did set 20 people on fire. HBO
'Game of Thrones' co-showrunner David Benioff said this battle was the most fire intensive one they have had on the show.

'We burned more stuntmen than have ever been burned in a single shot and in a single sequence,' said episode director Matt Shakman.

Explosions for the scenes come from the ground up to light the men on fire, creating 15-foot fireballs. The stuntmen are told to hold their breath during those scenes in order to keep their heartrates down.

'If someone's on fire, you know, it's quite a high adrenaline thing going on and saving your breath is very important so you've got to be calm,' said stuntman Doug Robson.

A clip shown in the featurette shows men holding their breath for at least 12 seconds before being extinguished.

And when the Dothraki stood on their horses to shoot bows and arrows, that wasn't CGI either. HBO
The moment when the entire army stands up on their horses was really impressive.

The show's horse master, Camilla Naprous, came up with the idea for Dany's army to stand up and take aim as the horses galloped. HBO
Filming of the Dothraki getting up on their horses.

'I thought, well that sounds great, but that's not possible,' said episode director Matt ShakmanShakman. 'And she (Naprous) said, no it is!'

The crew built special stirrups that allowed the actors to make the scene come to life. HBO
A car ran alongside the Dothraki to film as the horses ran.

'You got almost a metal shoe that you put your foot into, and then you have one foot on the side of the horse and the other foot on the top of the saddle,' said Dothraki rider Charlie Barrett.

You can watch the full breakdown of the Loot Train Attack below. 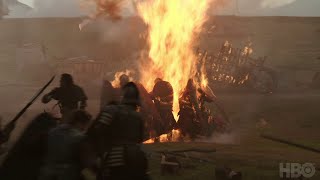