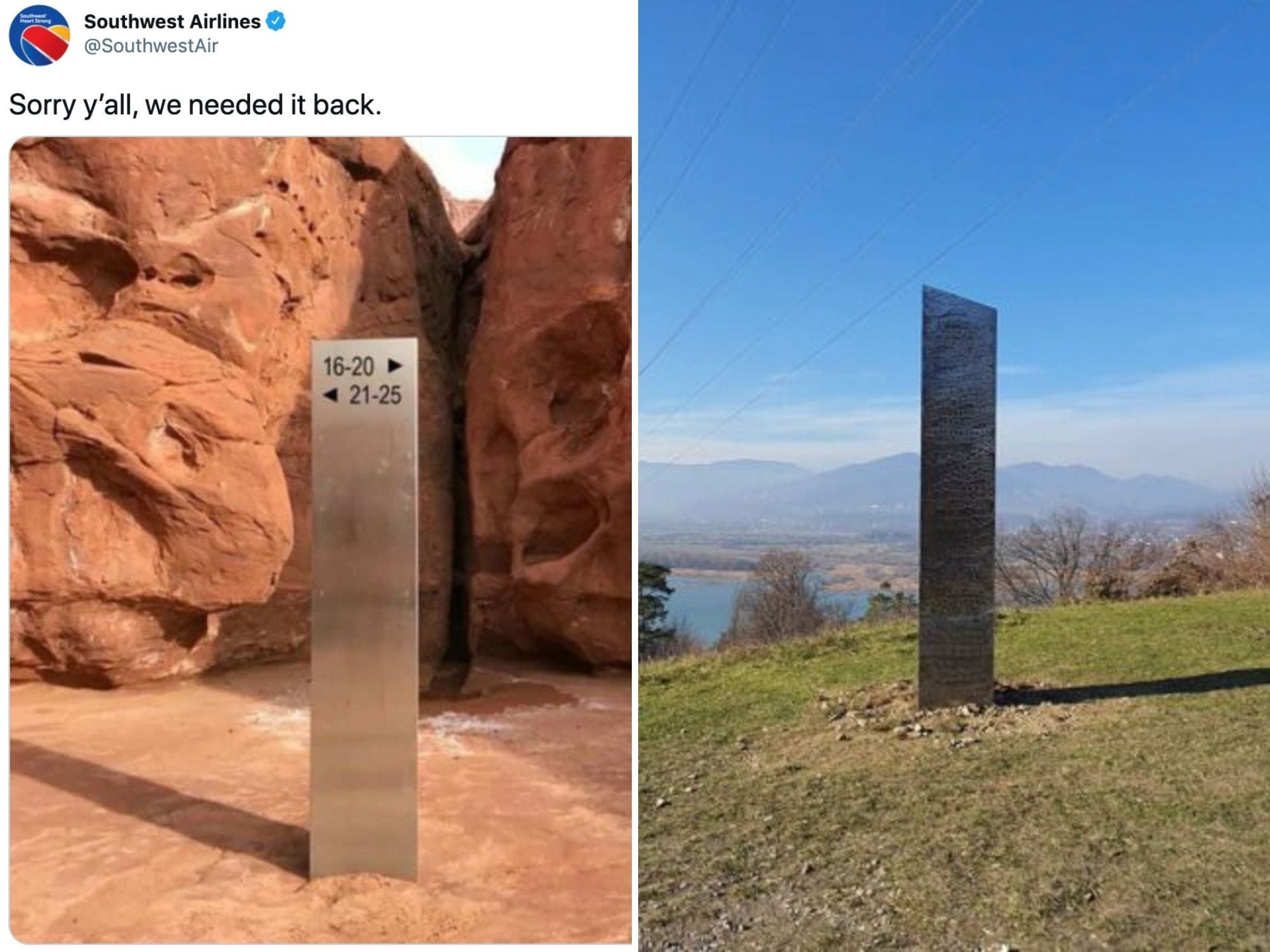 Courtesy @Iotapup; ReutersA graphic created by @Iotapup on Twitter for Southwest Airlines; A monolith that appeared in Romania.

Since November, people have been stumbling upon inexplicable metallic monoliths in locations around the world.

On November 18, Utah state officials found the first monolith in the desert in the southeastern part of the state. On November 27, the Utah monolith vanished, and another structure appeared in the Romanian countryside. On December 2, a monolith appeared on a mountain in California, one day after the Romanian metal structure disappeared.

On December 3, a fourth monolith appeared outside of a candy shop in Pittsburgh, Pennsylvania, but the purpose of this structure was a marketing tactic by the business owner, according to Reuters.

On Sunday, another monolith seemed to be discovered in the Netherlands.

Whether the structures are forms of art or part of a campaign that has yet to be announced, they continue to perplex onlookers. The confusing nature of the monoliths has made for ripe meme-making conditions, and as a result, many people and brands have attempted to make light â€” and make sense â€” of the mysterious structures with posts on social media.

For example, users on Twitter are incorporating pictures of the metal monoliths into pop culture moments, such as the Met Gala.

the monolith has fallen down the stair at the met gala pic.twitter.com/IZDYB9d3KF

Celebrity chef Guy Fieri joined in on the monolith meme-making trend, weaving in his signature Flavortown brand and saying with a picture of a fork-shaped structure in the middle of the Utah desert.

BREAKING: Another mysterious monolith appears, this time in @flavortown pic.twitter.com/dbp4FcKQJZ

The mysterious monolith has appeared on the TED stage. pic.twitter.com/2jrp0Ml4tE

The official “SpongeBob Squarepants” Nickelodeon TV show account on Twitter sparked a trend by referencing an episode from the cartoon series where the sea creature gets acquainted with a rectangular block of marble, which he later carves into a sculpture.

A designer at Facebook added circular, social media-inspired graphics to a picture of the reflective structure that was found in Utah and joked: “BREAKING: Monolith Inexplicably Returns… With Stories.”

As Business Insider’s Mary Meisenzahl reported, several brands, including Southwest Airlines, MoonPie, and Steak-umm, have turned the monoliths into social-media posts with their companies in mind.

For example, Southwest’s monolith meme, which was created by Twitter user @Iotapup, was made to look like one of the airline’s boarding signs that appear at airport gates.

Ocean Spray edited a photo of one of the metal structures into a cranberry harvest.

Hard to get any work done with these things popping up everywhere. #Monolith pic.twitter.com/86JGj62K36

McDonald’s also got in on the joke, revamping the sculpture that later disappeared from a Utah desert into what looks like one of the fast-food chain’s drive-through ordering screens.

welcome to McDonald's what can i get you? pic.twitter.com/iIgd8J5QIW

Walmart joined the conversation by comparing the mysterious sculpture to a wall mirror it sells in its stores.