This $90,000 camper van conversion was built on a Mercedes-Benz Sprinter for a woman to travel with her 4 dogs — see inside 'Pluto' 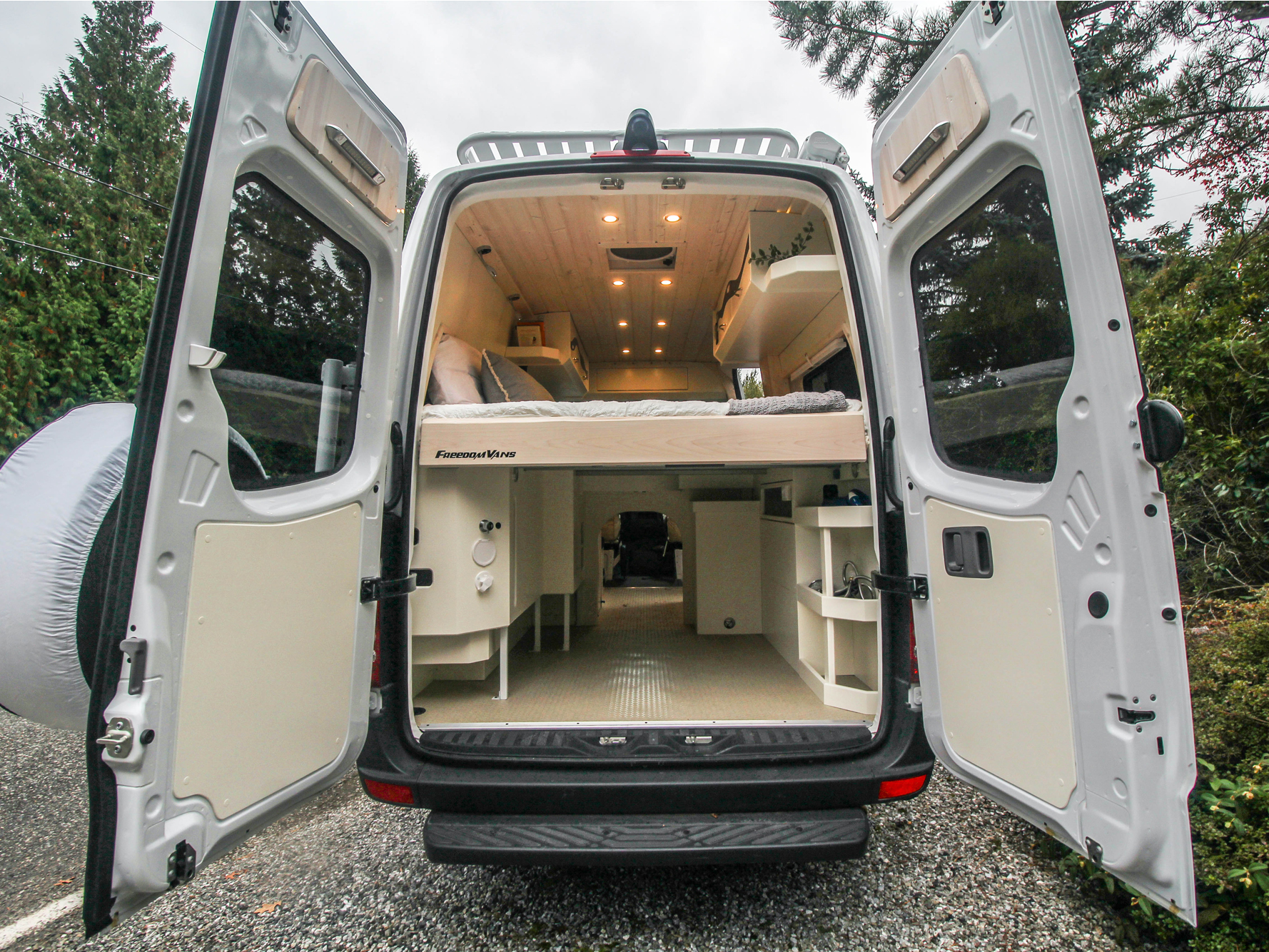 Washington-based camper conversion company Freedom Vans created a custom $US90,000 camper van conversion named Pluto on a Mercedes-BenzSprinter for a woman who wanted to travel with her dogs.

The 144-inch Sprinter has the same amenities as any normal non-mobile home, such as a kitchen, bed, garage, leisure space, and toilet. But unlike most camper van conversions, Pluto was built out and optimised to accommodate both the #VanLife owner and her four dogs: two that she owns, and two that she’s fostering, according to Freedom Vans’ YouTube video tour of the build.

Freedom Vans was first founded in 2015 and has since expanded to include nine team members and over 42 completed conversions, including the Fitz Roy camper build.

The company is typically booked between 10 to 14 months ahead of time for full conversions. But besides complete custom conversion work, Freedom Vans can also do smaller tweaks on existing builds, such as installing a battery or solar power system.

To keep the dogs safe on a hot summer day, Freedom Vans included an air conditioning unit and temperature sensor that allows the owner to remotely check the interior temperature of the van while she’s away. The interior of the van is also insulated. … which is important because it provides a hotspot that allows her to do the temperature sensor checks. Body flares were installed to increase the width of the interior sleeping space from 5.7 feet to 6.4 feet long … which has integrated lights and room the dog crates. There are also lights to brighten both the interior and exterior of the van, including a reading light, storage lights, and exterior light bar. 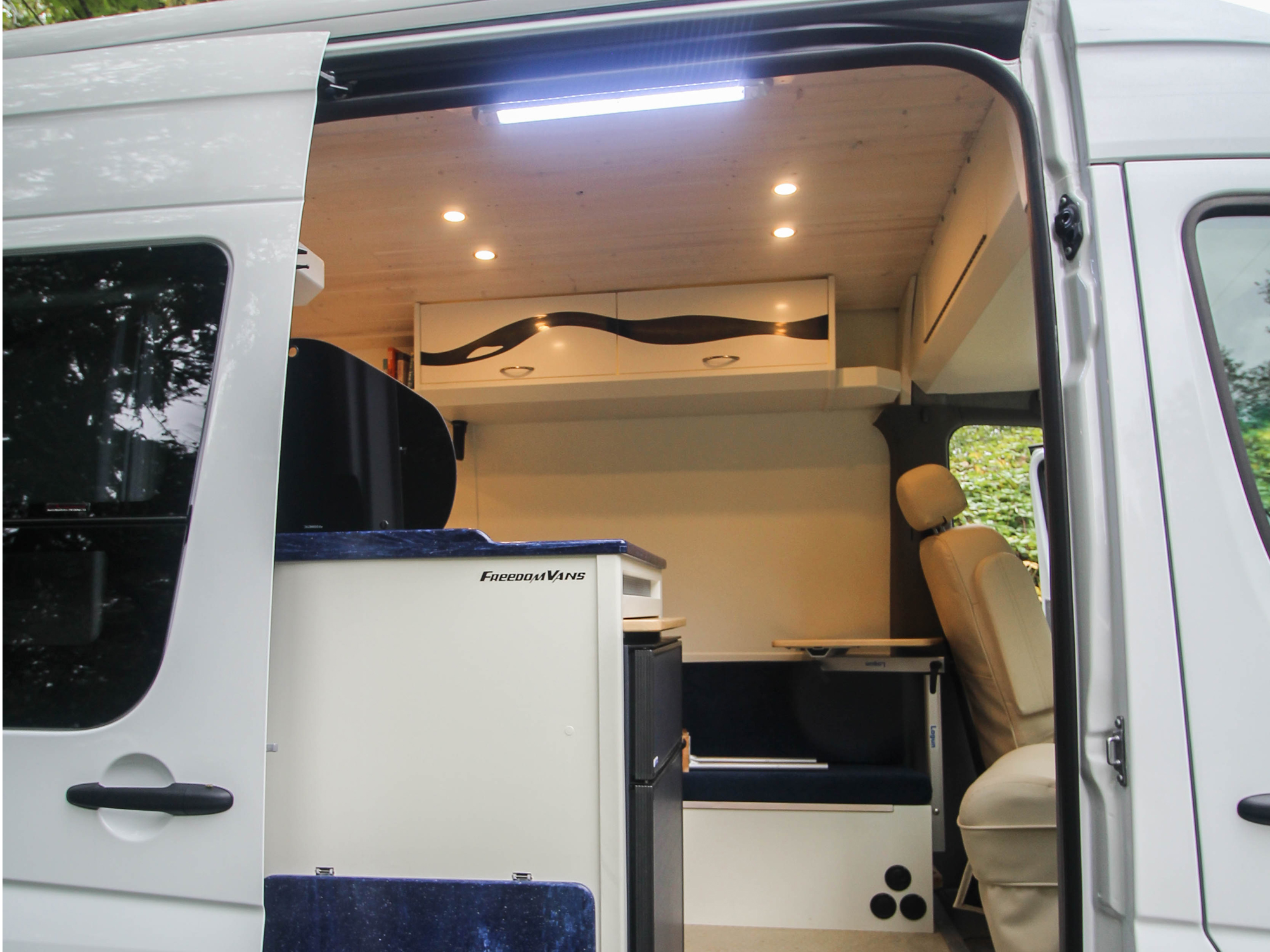 For meals on the road, the kitchen comes with a sink, single-burner stove … … refrigerator, and pull-out cutting board to extend the space of the countertop. The storage drawers on the kitchen unit are push-to-open, streamlining its appearance. Pluto also has an awning and a flip-up table attached to the exterior-facing part of the kitchen unit, creating an eating and leisure space directly outside of Pluto. 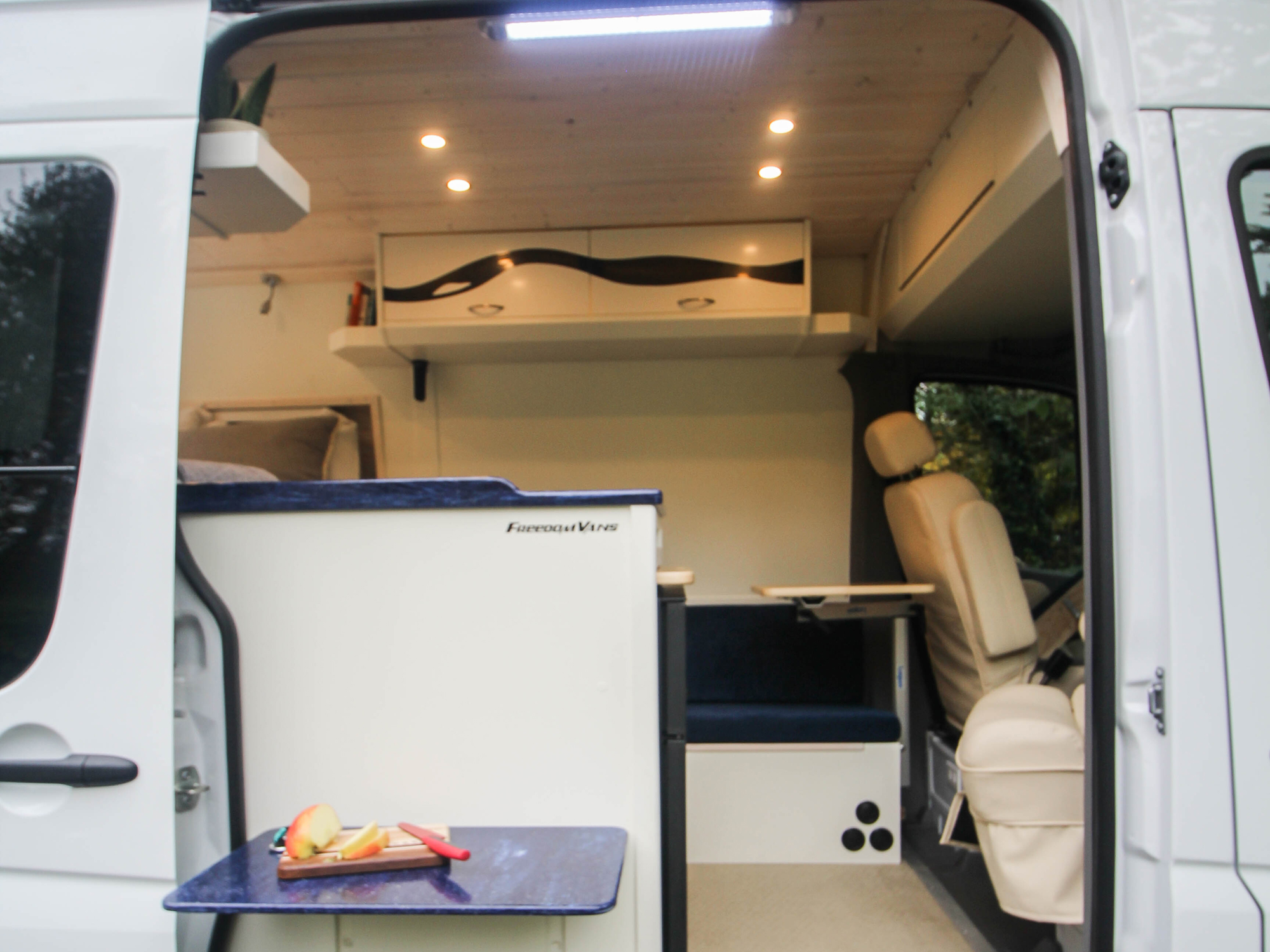 But for indoor dining, the bench has a removable table. The “bathroom” comes in the form of a hidden slide-out composting toilet and an outdoor shower. The toilet is hidden in a cushioned seat that can flip out to become a small dog bed. Pluto comes with a hose so the owner can wash her dogs down before they enter the van after a muddy outing. The water needed for the sink, shower, and hose is sourced from Pluto’s 30-gallon fresh water tank and four-gallon electric water heater. The windows come with shades for privacy when on the road. The bench seats — with cushions and integrated storage units — serve as the tiny home’s living room. There are multiple storage units both inside and outside Pluto, including backlit overhead cabinets and a custom roof rack. The roof rack can be accessed with a ladder mounted on the non-entry side of Pluto. For comfort on longer road trips, both the driver and passenger seats have been upgraded to allow for more comfortable seating with integrated armrests. The passenger seat can also swivel back to face the interior home. The 400-watt solar system, 400-amp hour battery, and 2,000-watt inverter powers all of the amenities aboard the tiny home. There are also AC and DC outlets for electronics charging. The wheels and tires have been upgraded to allow Pluto to be driven in more versatile environments. In total, the conversion cost $US90,000, including its improved suspension. 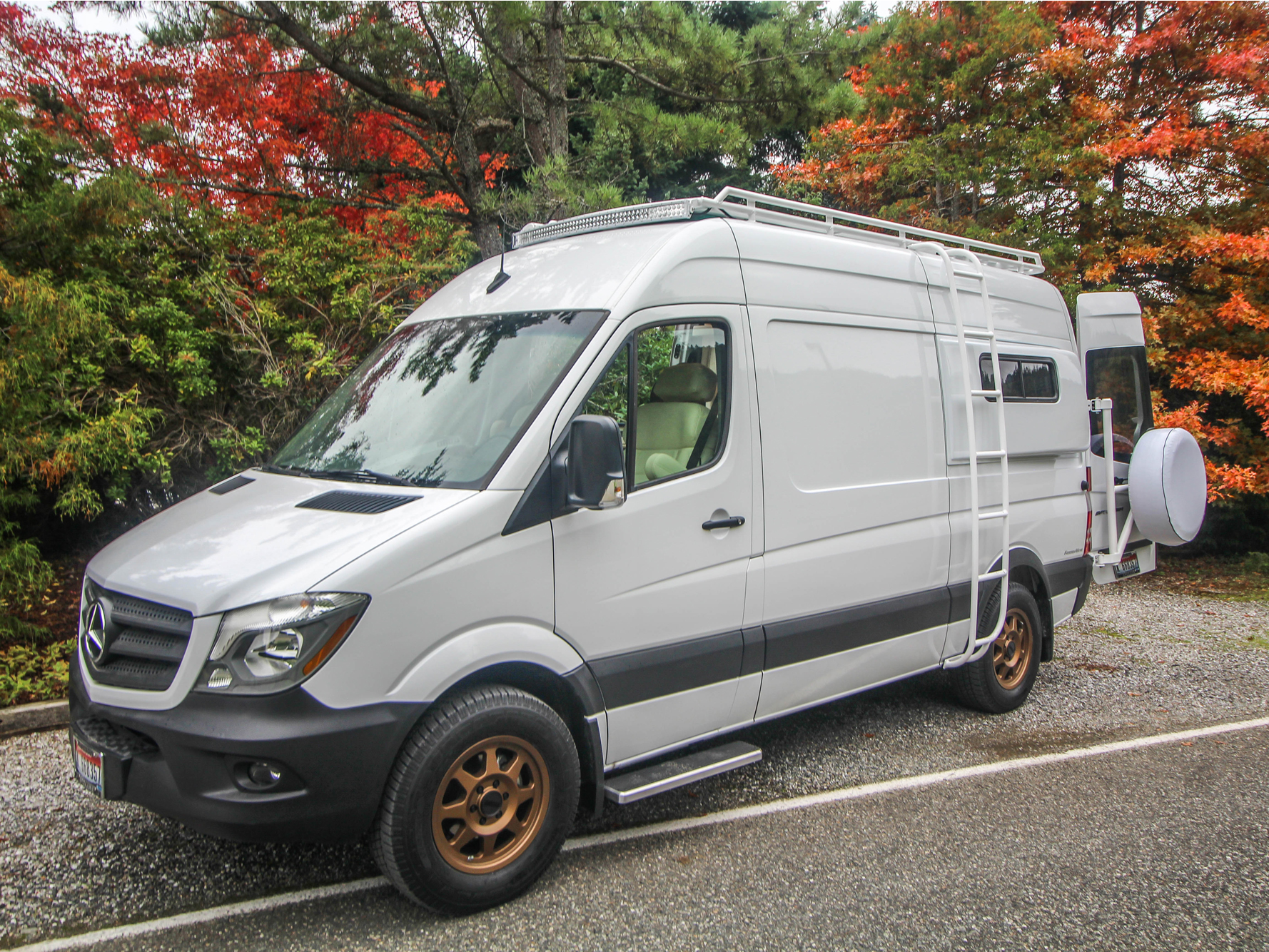