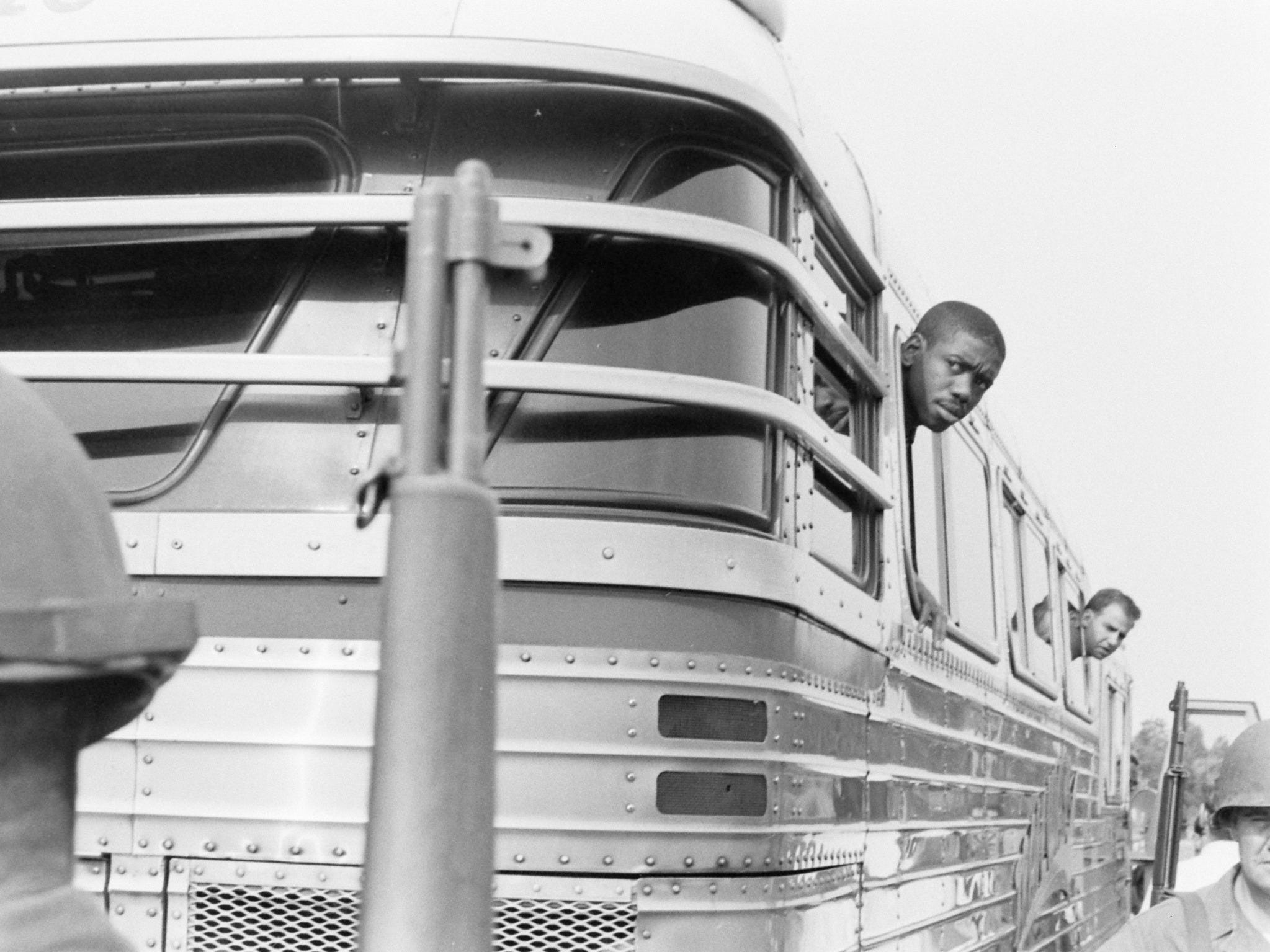 When Betty Daniels Rosemond watched a video of George Floyd calling for his momma, her heart broke.

“It brought back everything,” the 81-year-old told Insider. “Everything I did was about my mother.”

Floyd has become a symbol of change across the country after he was killed in police custody. A Minneapolis police officer pinned him to the ground with a knee on his neck for more than eight minutes. A video of the event has circulated, causing an uproar against police brutality and a call to defund the police.

As Rosemond watched the video and protests across the country, it triggered memories of her childhood and involvement in the civil rights movement.

Rosemond grew up in New Orleans, Louisiana, and recalled coming home as a teenager to her crying mother. In order for a Black person to be able to vote, he or she had to take a test.

The test was nearly impossible to pass, making it nearly impossible to vote. Across the South, states implemented poll taxes, literacy tests, and constitutional quizzes to prevent Black people from voting. These challenges and other instances of racism led Rosemond to be part of the change.

“There was so much going on in the Deep South,” Rosemond described. “We had to do something.”

She joined the Congress of Racial Equality. She went to nonviolence training. She picketed, joined sit-ins, and participated in the Freedom Rides, which is what she’s known for today.

The Freedom Rides took place across the South in 1961

While segregated bus and train stations were found unconstitutional, few actually desegregated. So Black and white activists from across the country decided to get on buses, enter bus stations, and use the whites-only restrooms, lunch counters, and waiting areas.

When these buses would reach the stations they were often met with police officers and angry mobs. One bus was bombed, another was burned. Dozens of the peaceful protesters were thrown in jail.

Insider spoke to six Freedom Riders, who shared their experiences and what parallels they see today with the Black Lives Matter movement. 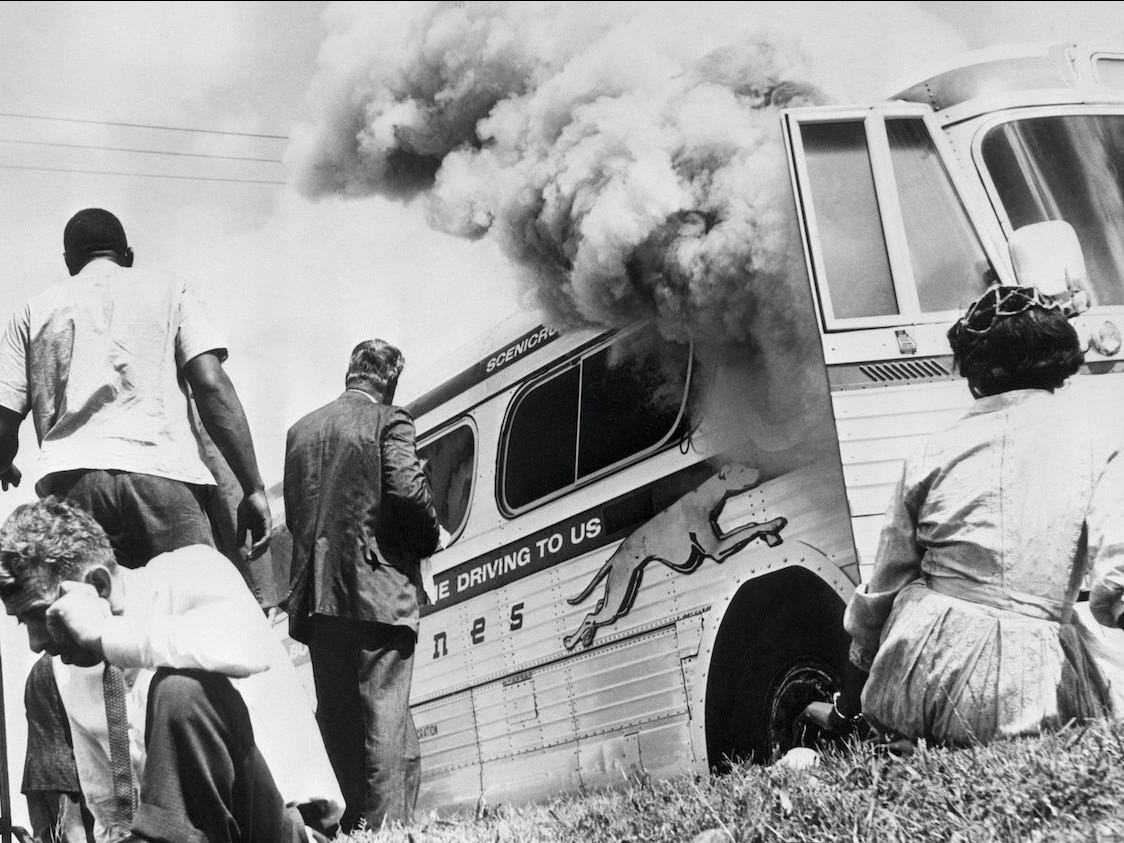 The Freedom Riders are historically known for being nonviolent

Every Freedom Rider Insider spoke to still supports a nonviolent approach to protests. Before stepping onto a bus, Freedom Riders pledged to be nonviolent. While some chose it as a tactic, others saw nonviolence as a way of life. For many, the Freedom Rides are a historic reminder of what nonviolence can accomplish.

Thomas Armstrong said it felt like he didn’t have a choice whether or not to be nonviolent as a Black man living in Mississippi.

“It’s like Goliath. You’re out there with a slingshot and everybody else has AK-47s,” Armstrong told Insider. “What sense does it make for you to go out there throwing rocks?”

A Black person acting violently was the equivalent of a death sentence in the South, Armstrong said. For him, nonviolence was the only way of life.

Rosemond agreed. She still holds nonviolent values today, but she also said that she understands the anger.

Rosemond told Insider the message she often shares with her daughter, Michelle Rosemond, and her grandson, Isaiah Reaves: Any cause worth living for is a cause worth dying for.

Reaves said that his grandmother has instilled many lessons in him. “It’s sad that we’re here again,” he told Insider. “But my heart is warmed by seeing the activism.”

While Rosemond was more understanding of the riots, other Freedom Riders recite the common phrase “violence begets violence,” which was used by Martin Luther King Jr.

Charles Person is one of those Riders. He was on one of the first two Freedom Rides when he was 18 years old. An angry mob boarded the bus he was on when it came to a stop in Anniston, Alabama.

“They came on the bus, and they beat us and they forced us to the back of the bus,” the 77-year-old told Insider. “They tormented us all the way to Birmingham.”

When he got off the bus in Birmingham, Alabama, another mob was there to attack. The only existing photograph of the Freedom Ride depicts Person being attacked by a mob of white men. He said that as soon as the reporter’s flash went off, the mob went after the journalist.

Throughout the entire event, Person remained nonviolent. He didn’t hit, he didn’t throw punches, and he didn’t fight back.

While Person was trained in nonviolence at MLK’s headquarters in Atlanta, Georgia, many Northerners stopped in Nashville, Tennessee, for their own training before heading deeper into the South.

Many activists believe that a nonviolent approach juxtaposed the violence that was acted on them. Peaceful riders dressed up in their Sunday best were beaten, causing outrage across the country and the world. 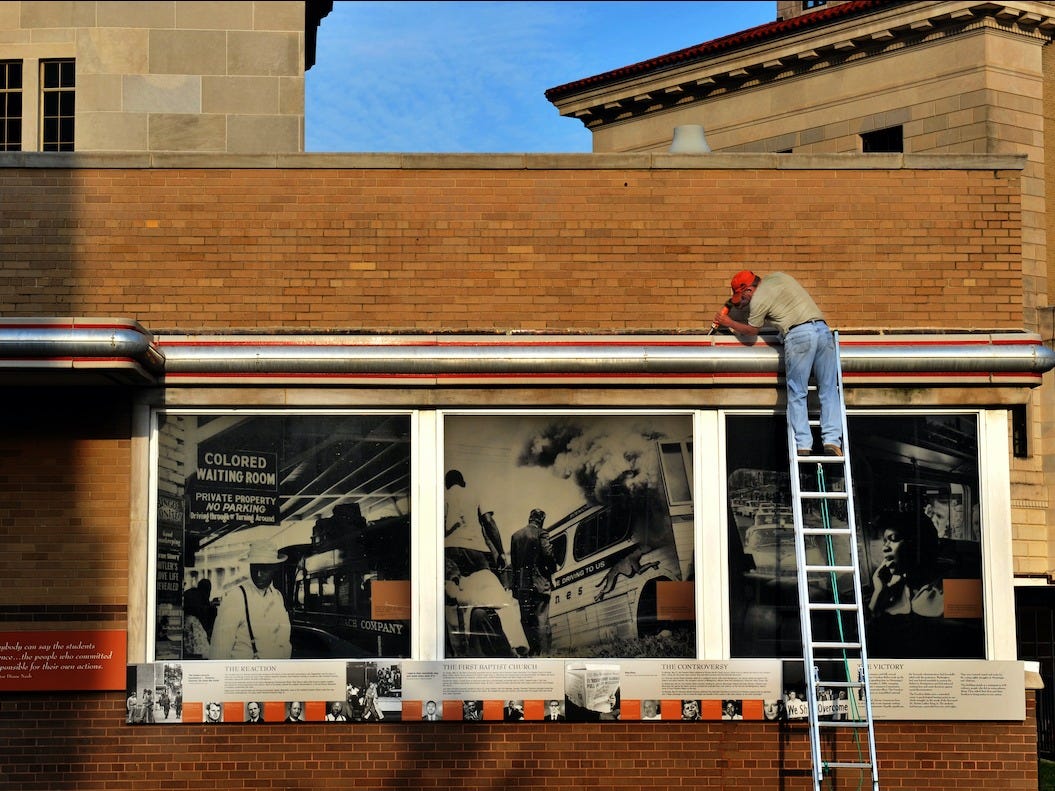 “It wasn’t actually central to the issues. It didn’t really speak to the systemic nature of racism,” Claire O’Connor, a Freedom Rider, told Insider. “But somehow it did capture people’s thinking and analysis and propelled them toward looking more broadly.”

O’Connor said that the fight for justice was always central in her family. “My first public act was in my mother’s arm on a picket line,” she explained.

O’Connor grew up in Minnesota. In the summer of 1961, she got on a bus from Minneapolis and stopped in Nashville for nonviolence training. Her bus eventually travelled into Jackson, Mississippi, where she was jailed for 28 days.

After the first two Freedom Rides, organising groups decided on a “jail, no bail” tactic. Freedom Riders were sent to cities like Jackson, where they were immediately arrested. The goal was to fill the correctional facilities.

O’Connor remembers her mother’s pride. A letter titled “This Mother is Proud her Daughter is in Jail” was published by the St. Paul Pioneer Press on June 30, 1961.

“The Freedom Ride was one step,” Broms said. “It was a significant step, but it became even more significant much later as people look back.”

Broms ended up in jail in Houston, Texas, after travelling from Los Angeles, California, on one of the last Freedom Rides in August. At the Houston city jail, thumbprints were recorded and the activists were required to fill out paperwork. One question asked their race, but the Freedom Riders left it blank.

Broms, a white woman, was miscategorized as “High Yellow” and was placed in an all-Black jail cell.

“For a short period of time, we integrated the jail cell,” Broms said. The guards realised their mistake and Broms was moved to another cell, where she spent the next eight days. 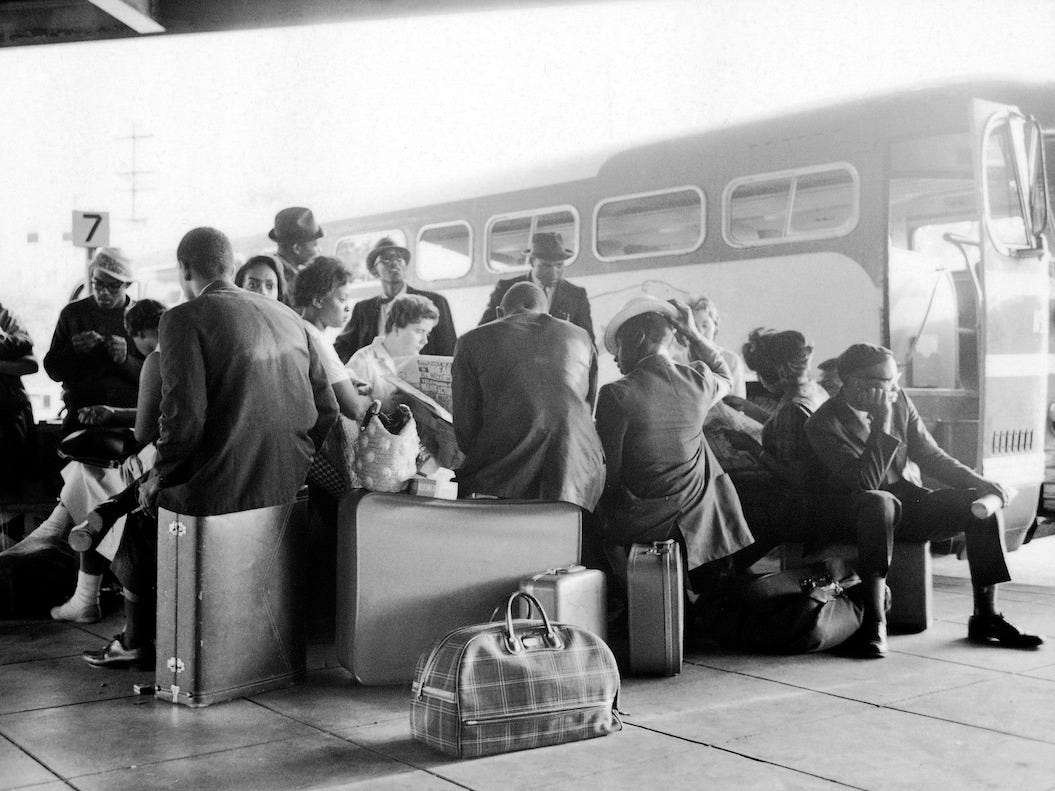 Donald Uhrbrock/Getty ImagesFreedom Riders sit on their luggage at a bus station in Birmingham, Alabama, on May 1961.

“Nothing seemed to kick things into action until George Floyd,” said O’Connor. “What kicked us into action … that was Emmett Till.”

Emmett Till was 14 years old when he was murdered in Money, Mississippi. The boy was accused of flirting with a white woman, and the woman’s husband and brother brutally murdered Till in response.

The horror of that event in 1955 sparked some Freedom Riders’ involvement in the movement. Similarly, the death of Floyd led many people to protest and speak out against racism for the first time in their lives.

“The parallels are really surprising, and I’m just hoping that the parallels will continue and that we won’t just forget this,” O’Connor said.

“In lamentable ways, it is exactly the same situation,” David Fankhauser said of the civil rights movement and today’s Black Lives Matter movement. “We are still living in a society that has racism deeply ingrained.” 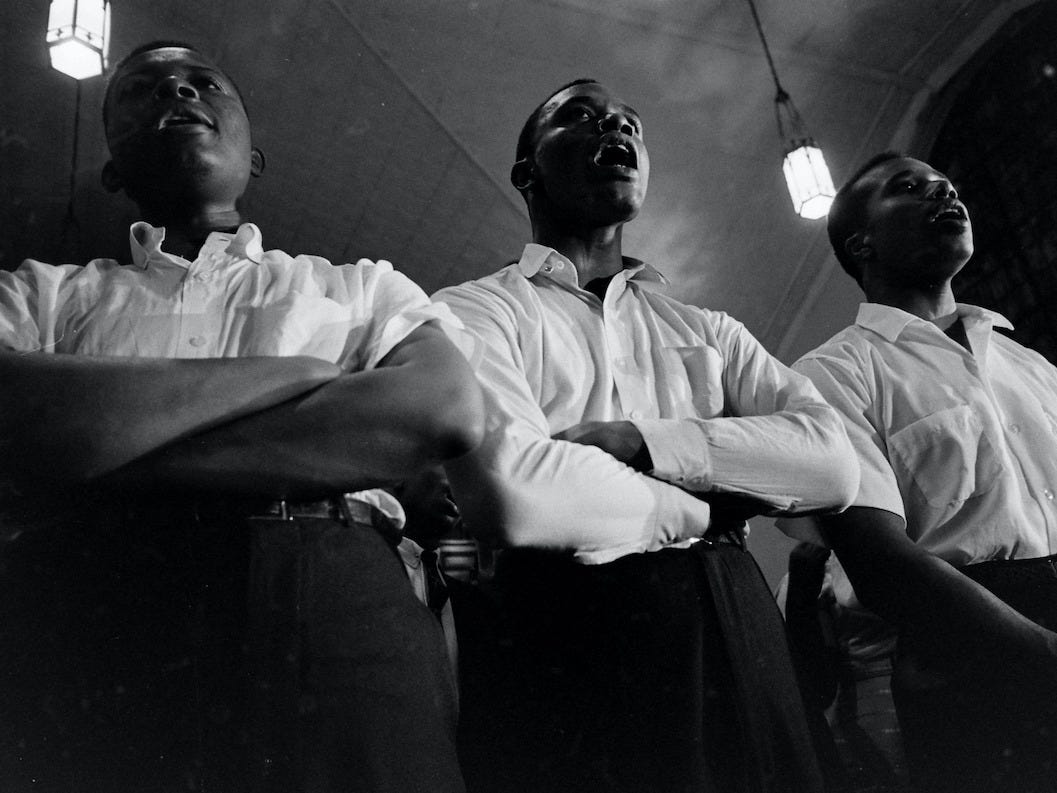 Fankhauser’s stories and conversations are interrupted by lyrics.

The 78-year-old recalled cheers from his first football game and recites lyrics to explain a point.

A large part of this tendency stems from his experience as a Freedom Rider.

When Fankhauser was 19 years old, he hitchhiked from his college town in Ohio to Cincinnati, where he got on a plane headed to Montgomery, Alabama, on May 24, 1961.

“My mother gave me a haircut,” Fankhauser said. “I dressed in my best. I put on my only suit and a tie, and the next morning I was on my way to Montgomery.”

In Montgomery, he went to civil rights leader Ralph Abernathy’s house where he waited for four days until enough volunteers arrived to fill a bus.

With enough Riders, they integrated the Montgomery bus station, purchased tickets, and headed to Jackson.

In Jackson, Fankhauser and other Riders were arrested and placed in the Jackson city jail, where he spent three days in solitary confinement. From there, he was sent to the Mississippi State Penitentiary, also known as Parchman Farm. In Parchman, the 28 Riders kept each other uplifted through song.

The prison guards hated the singing, Fankhauser said. They took away their toothbrushes, their Bibles, their mattresses, and, finally, the screens to their windows.

Parchman is located in the Mississippi Delta, so when the screens were gone, thousands of mosquitoes and bugs flew into the cells. If that wasn’t bad enough, guards responded by using insecticide in the cells.

“They were trying to break our spirit,” Fankhauser told Insider.

Still, the men sang. After 42 days, Fankhauser was released.

“Singing is such a positive, community-building activity,” he said, tearing up. “It’s not hostile. It’s not angry. You can feel committed to a cause, but when you’re singing, it’s hard to be angry.”

Fankhauser wasn’t the only one who recalled the important roll songs played in the Freedom Rides.

“I advise all civil rights participants now to find a song or a poem that speaks to their philosophy of life,” Armstrong said.

For Armstrong, the song was “Precious Lord Take My Hand.”

“When I would be standing in the midst of hate fields, mobs, and situations of hate, that song always came to me,” he said. 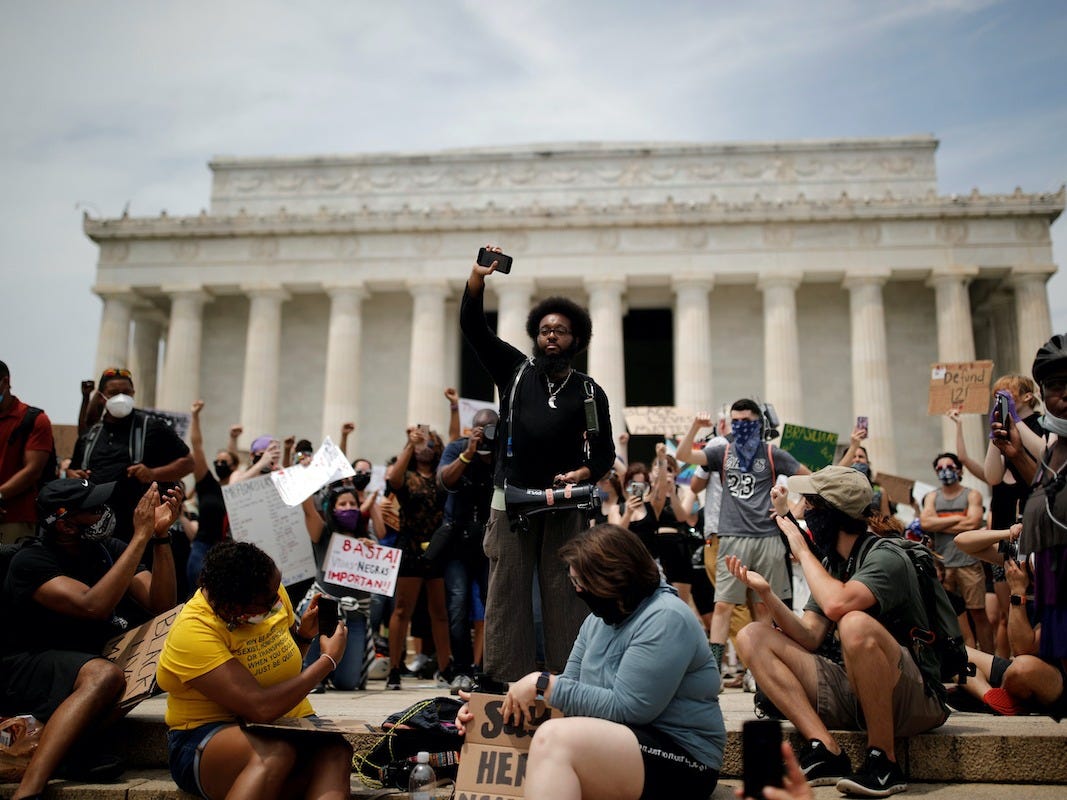 Carlos Barria/ReutersDemonstrators gather at the Lincoln Memorial during a protest against racial inequality on June 6, 2020.

The Freedom Riders had some additional advice for today’s activists

In February, Armstrong led a workshop in Naperville, Illinois, about civil rights and how young people can help enact change.

Just a few days ago, he watched those same students protest in a Black Lives Matter demonstration.

“Some of the activists seeing that had tears running down their eyes,” he said. “I was just so happy to see that they made that choice.”

She also said they should recognise that they’re going to have to be in it for the long-haul. Broms later focused on the peace movement, but she never stopped fighting for justice.

When she thinks about the protests today, she wishes she could be there. “My spirit is willing, but my body is not able anymore,” Broms said.

Many of the Riders, like Fankhauser, Broms, and Person condemned the violence and rioting that they have seen on screens.

Fankhauser worried it will be used to tarnish the current-day movement. “[The violence] is a shield for the government to say, ‘Well, look, it’s just a bunch of violent people,'” he said.

However, the Riders have been encouraged by the protests.

“I do see a lot of love,” Fankhauser said. “I do see seeds of love sprouting in this society.”

Fankhauser urges protesters to spread that love and hopes we come out of this movement and this pandemic with a more just and equitable society. 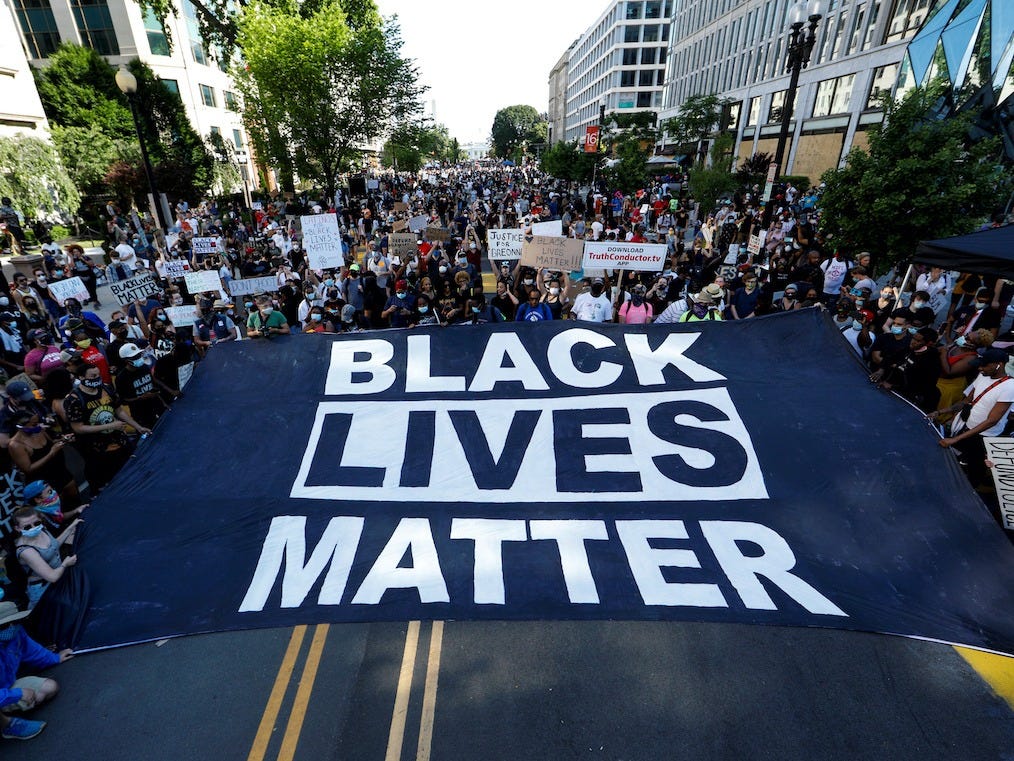 Jim Bourg/ReutersDemonstrators hold a giant sign at the Black Lives Matter Plaza, near the White House, during a protest against racial inequality on June 6, 2020.

While so many imagined the US would have made more progress by now, the Freedom Riders are inspired by the young people they see protesting against racial injustice.

None of them regret their involvement.

“If somebody would help me up the steps of the bus, I would do it all again,” Rosemond said.

Every Rider said they still have hope.

That gives him hope.