Franklin Resources and Legg Mason shares surge as firms announce they will combine into a $1.5 trillion asset manager Franklin Resources, which operates under the name Franklin Templeton, will pay entirely in cash. The deal, expected to close by the end of the third quarter this year, will grow Franklin Templeton’s assets under management to $US1.5 trillion.

Shares of both companies surged on the news: Legg Mason shares rose as much as 27.70% in early trading, and Franklin Resources stock jumped as high as 14.32% in the pre-market.

That’s a welcome change for Franklin Resources, which saw its stock trade at a 52-week low as recently as Friday. Asset managers have been under pressure in recent years as they struggle to make a case for active management while funds increasingly flow to lower-cost, passively managed funds. One of the ways they have fought back is through M&A activity.

“The combined footprint of the organisation will significantly deepen Franklin Templeton’s presence in key geographies and create an expansive investment platform that is well balanced between institutional and retail client AUM,” Franklin Resources said in the statement.

Trian Fund Management, the activist hedge fund that operates a 4.5% stake in Legg Mason, supported the transaction. It’s the latest chapter in Trian CEO Nelson Peltz’s relationship with Legg Mason – he built an activist stake and held a board seat on the firm from 2009 to 2014, only to rejoin the board in 2019,Barron’s previously reported. Peltz said the deal would bolster Legg Mason’s businesses “in an industry where scale is increasingly vital to success.” 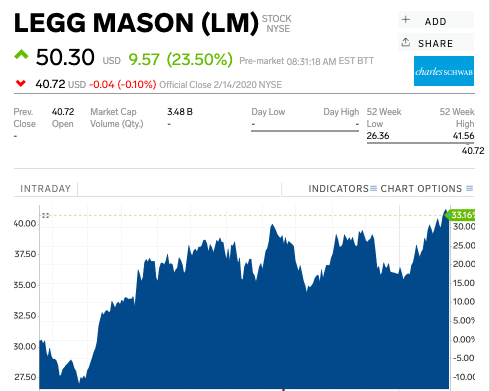