France has pulled its ambassador from Turkey, and Arab states are shunning French products, after President Emmanuel Macron renewed an assault on Islam following the killing of a Paris schoolteacher.

Samuel Paty, 47, was decapitated in northwestern Paris on October 16 after showing his class inflammatory cartoons that mocked the Prophet Muhammad. His killer, who has been identified as Chechen refugee Abdoulakh Anzorov, was shot dead by police at the scene. On Wednesday, French prosecutors charged seven people with participating in a terror attack.

Party’s religiously-motivated killing is the latest in a long line to hit France and has angered the country, prompting Macron to fast-track a law that would see unprecedented regulation of the organised Islamic faith in France.

On October 2, Macron called Islam “a religion that is in crisis all over the world” and said the law would help prevent radicalisation and foster better integration.

Macron said Islamist separatism was “a conscious, theorised, politico-religious project that materialises through repeated deviations from the values of the republic and which often result in the creation of a counter-society.” 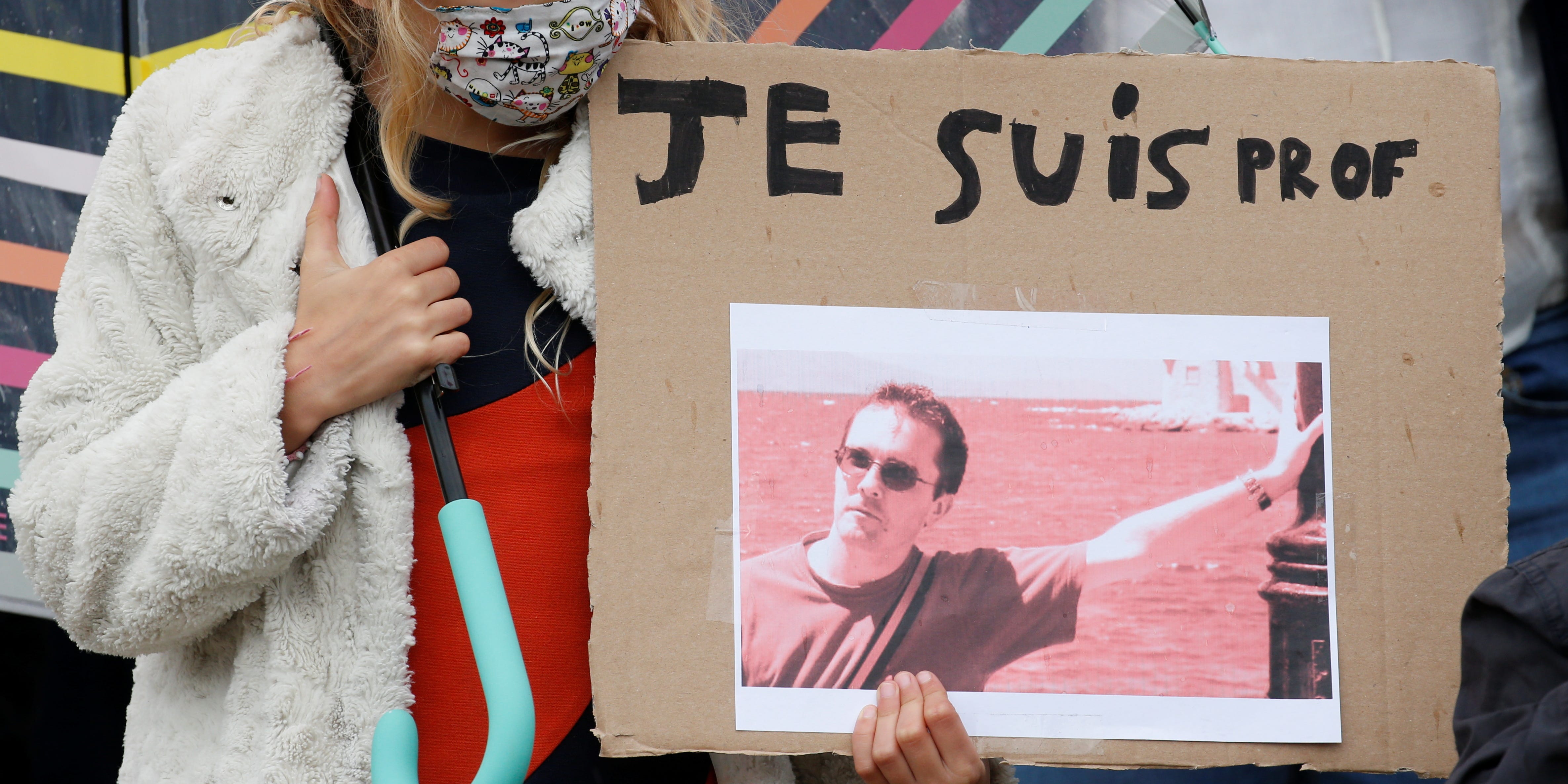 REUTERS/Pascal RossignoA girl holds a banner with a picture of Samuel Paty, the French teacher who was beheaded, in Lille, France, on October 18, 2020.

‘What is his problem with Muslims?’

France recalled its ambassador to Turkey on Sunday in response to Erdogan’s comments.

“President Erdogan’s comments are unacceptable. Excess and rudeness are not a method,” an Ã‰lysÃ©e Palace official told Agence France-Presse. “We demand that Erdogan change the course of his policy because it is dangerous in every respect.”

France said Sunday that boycotts in places like Kuwait, Jordan, and Qatar were “baseless” and “pushed by a radical minority.” 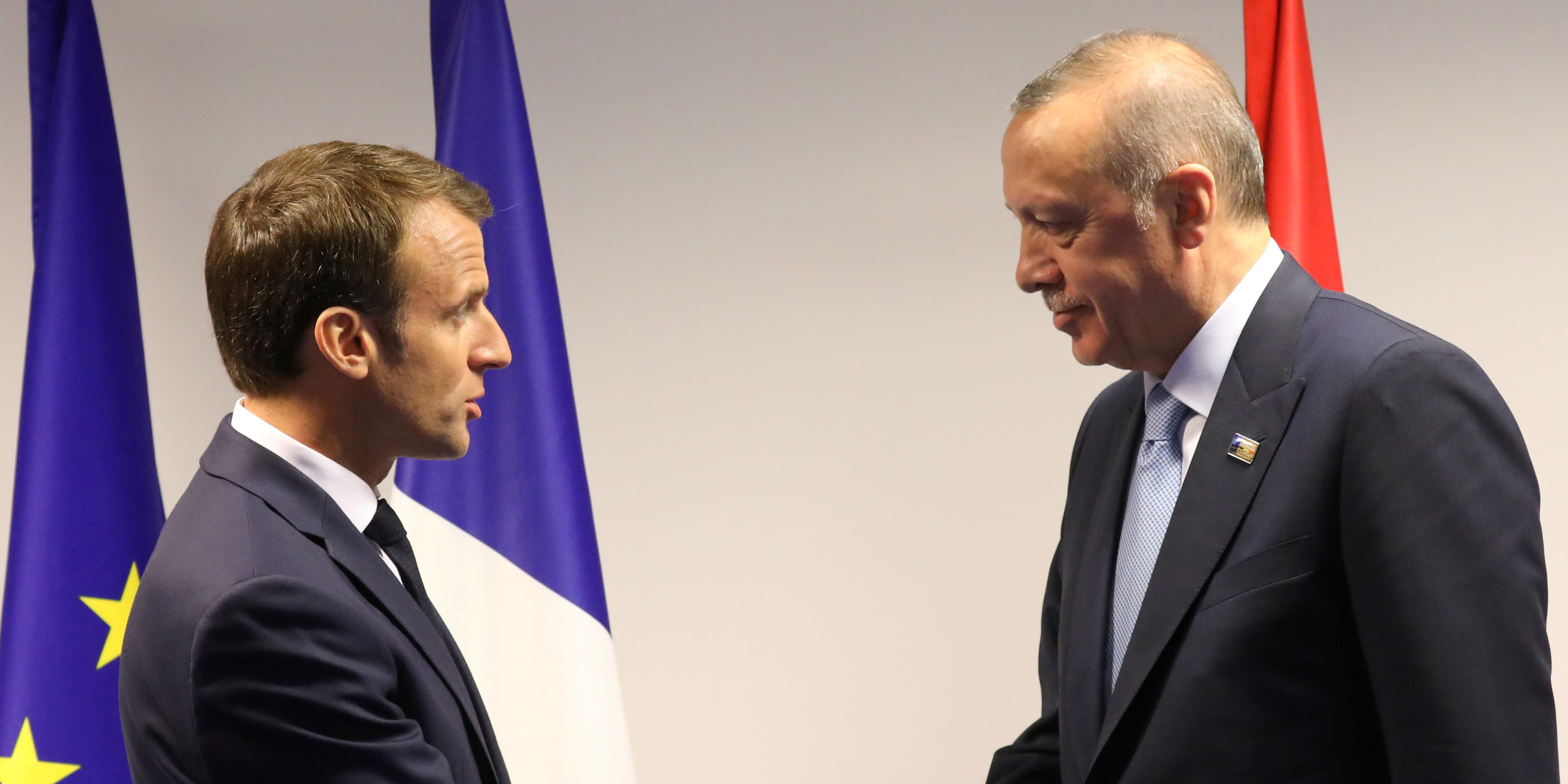 ReutersMacron meets Erdogan ahead of a bilateral meeting on the sidelines of a NATO summit in Brussels, Belgium, in 2018.

Macron’s rhetoric about Islam has angered many Muslim leaders, but it is not the first time the French president has announced his intention to regulate and scrutinize the faith.

In 2018, Macron said that Arab states were influencing Muslims in France through the funding of mosques and clerics.

Secularism â€” or the delineation of religion and the state â€” has been enshrined in the French constitution since 1905. Macron now wants to strengthen measures that would ensure that.

He said last week that he wants “an Islam in France that can be an Islam of the Enlightenment,” which will stop “repeated deviations from the values of the republic and which often result in the creation of a counter-society.”

As part of the new law, the French government will have the power to regulate how mosques are funded and train their clerics, and could even dissolve dozens of Muslim associations if they promote hatred, The Washington Post reported.

On Sunday Imran Khan, the prime minister of Pakistan â€” the world’s second-largest Muslim-majority nation â€” said Macron was “attacking Islam, clearly without having any understanding of it,” Reuters reported.

We will not give in, ever.
We respect all differences in a spirit of peace. We do not accept hate speech and defend reasonable debate. We will always be on the side of human dignity and universal values.