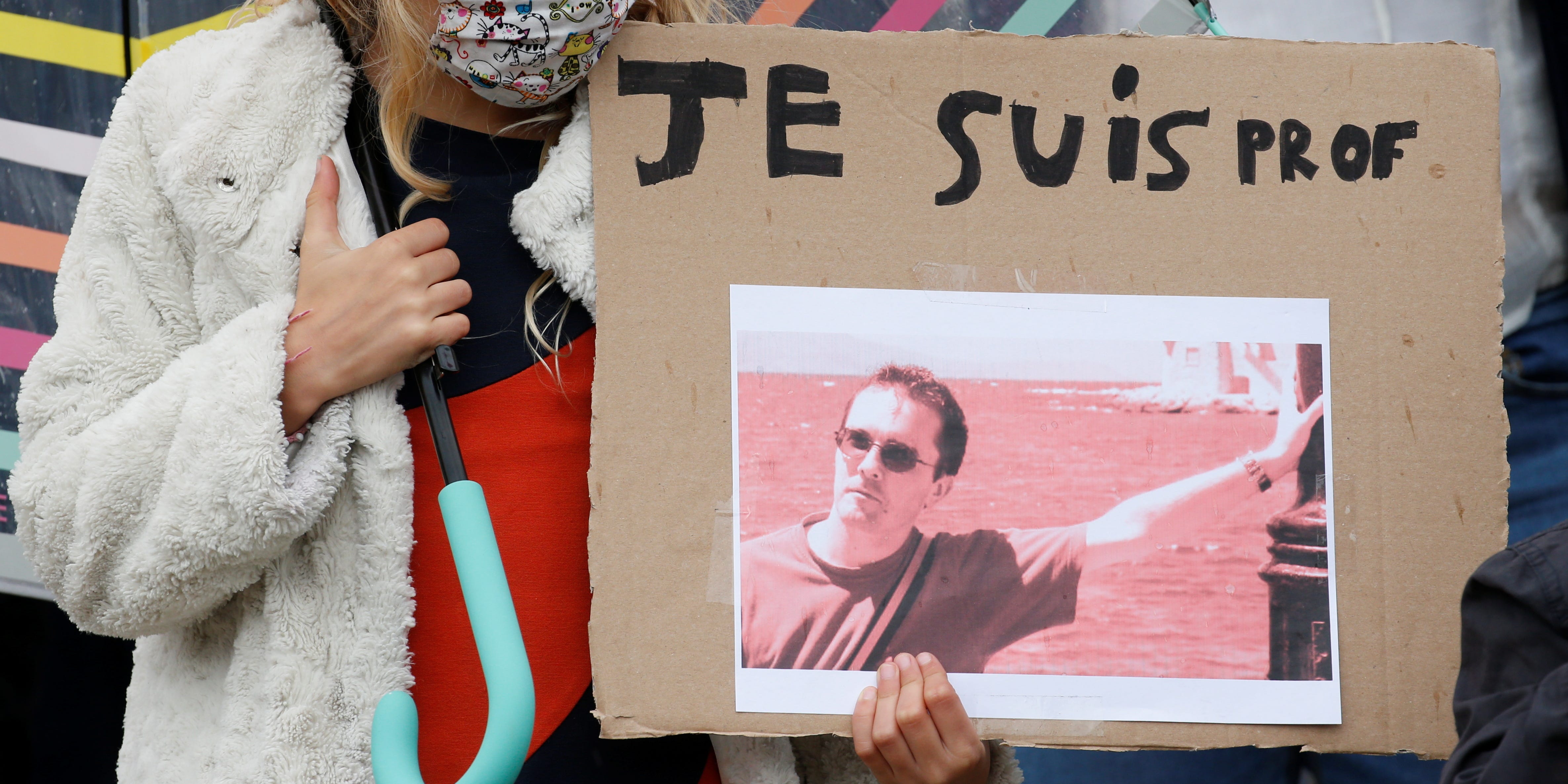 REUTERS/Pascal RossignoA girl holds a banner with a picture of Samuel Paty, the French teacher who was beheaded Friday, in Lille, France, on October 18, 2020.

Four students in Paris have been detained in connection to the beheading of a teacher who had shown his class cartoons mocking the Prophet Muhammad, according to Agence France-Presse.

Samuel Paty, a 47-year-old history teacher, was killed near his school in the northwestern Paris suburb of Conflans-Sainte-Honorine on Friday afternoon. Witnesses said the attacker shouted “Allahu akbar,” or “God is the greatest,” as he attacked Paty with a kitchen knife.

The Paris police later shot dead the suspect near the scene of the attack. Local media outlets have identified the suspect as Abdoulakh Anzorov, an 18-year-old Chechen refugee.

As of Monday, the police had detained 15 people in connection to the killing.

Among them are four students who are suspected of helping the killer identify Paty in exchange for cash, AFP reported. 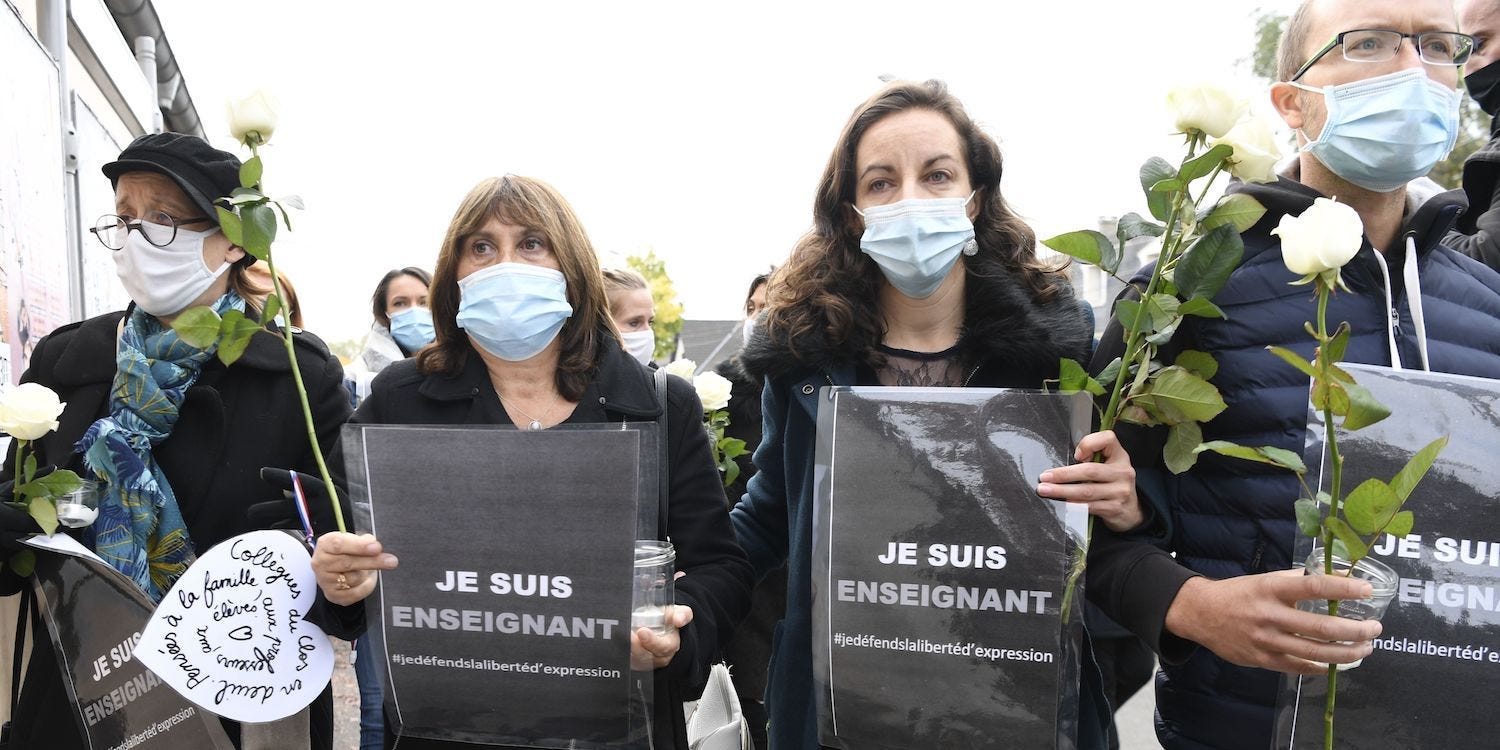 Bertrand Guay/AFP via Getty ImagesPeople hold a sign reading ‘I am a teacher — Freedom of speech’ in front of a middle school in Conflans-Sainte-Honorine, Paris, on October 17, 2020.

Earlier in October, Paty had shown his class a series of caricatures, first published in the satirical magazine Charlie Hebdo in 2015, mocking the Prophet Muhammad. Paty had shared the cartoons as part of an obligatory “moral and civil education” course.

Among those detained over the attack include four close family members of Anzorov, the father of a pupil at the school, and an Islamic preacher, according to the BBC.

According to Reuters, officials found a phone near Paty’s body containing what Ricard said was a message posted to the suspect’s Twitter account: “In the name of Allah the most gracious, the most merciful … to [French President Emmanuel] Macron, leader of the infidels, I have executed one of your hell-hounds who dared to belittle Mohammad.”

The suspect is also believed to have shared videos and images of what appeared to be Paty’s body with “fellow Russian-speaking ISIS supporters,” according to The Sunday Times, one of which was a picture of the Paty’s decapitated head.

Anzorov was given a 10-year French residency permit in March, Ricard said, adding that his half-sister had travelled to Syria in 2014 to join the Islamic State terrorist group.

Charlie Hebdo, the magazine that published the inflammatory cartoons, has been at the centre of multiple attacks since January 2015.

On January 7, 2015, following the magazine’s publication of cartoons mocking the Prophet Muhammad, two attackers identifying themselves as supporters of Al Qaeda raided the magazine’s Paris offices and killed 12 staff members.

Last month, the magazine republished the cartoons ahead of a trial in which 14 people were accused of helping carry out the attack. On September 25, a man from Pakistan stabbed two people outside the former offices of the magazine.

In the wake of the January 2015 attack, numerous terrorist attacks struck Paris that were later connected to the publication of the cartoons.

The Prophet Muhammed is the most important figure in the Islamic tradition. Any criticism, ridicule, and likeness assigned to him is seriously condemned by many Muslims.